LGBTQ history gets some well-deserved visibility around the world with these 12 unique statues.

History has often hidden LGBTQ people’s contributions to society, but thankfully these 12 locations around the world honor those influencers with their own monuments. Did you know Freddie Mercury settled in a charming Swiss town on Lake Geneva and the townspeople erected a statue of him striking a fabulous pose? Greta Garbo, who was linked to lesbian writer Mercedes de Acosta for almost three decades, has a sculpture of her hidden in a remote Swedish forest. In Andalusia, you’ll find a bust of Al-Hakam II, Caliph of Córdoba from 961 to 976, who kept a male harem. These memorials across three continents help to show that LGBTQ history is everywhere. 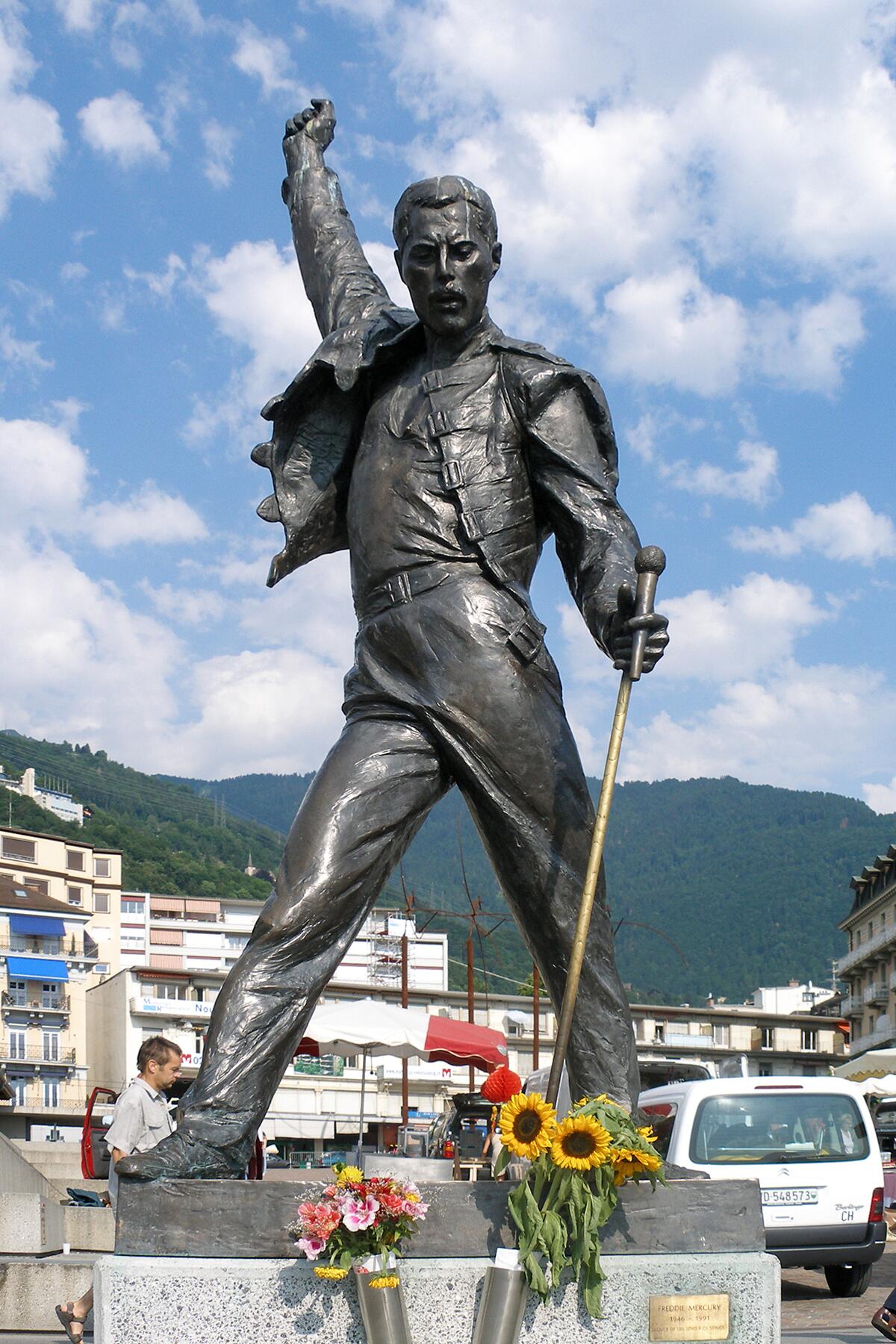 Born in Zanzibar (now Tanzania) and raised in India and England, Farrokh Bulsara was a globetrotter from a young age even before touring the world as legendary singer Freddie Mercury. As the lead singer of the rock band Queen, he was the voice behind classics like We Are The Champions and was the subject of the 2018 biopic Bohemian Rhapsody. Mercury first came to Montreux, Switzerland in 1978 for its world-famous annual jazz festival and fell in love with the tranquility of Lake Geneva. He eventually settled there in a lake-view apartment to live out his final years after his 1987 HIV diagnosis. In 1996, the town of Montreux erected a rightfully flamboyant statue in his honor on the lakeside promenade. A photo of this statue overlooking Lake Geneva is the cover of Queen’s Made in Heaven album, which Mercury wrote in Montreux shortly before his death. 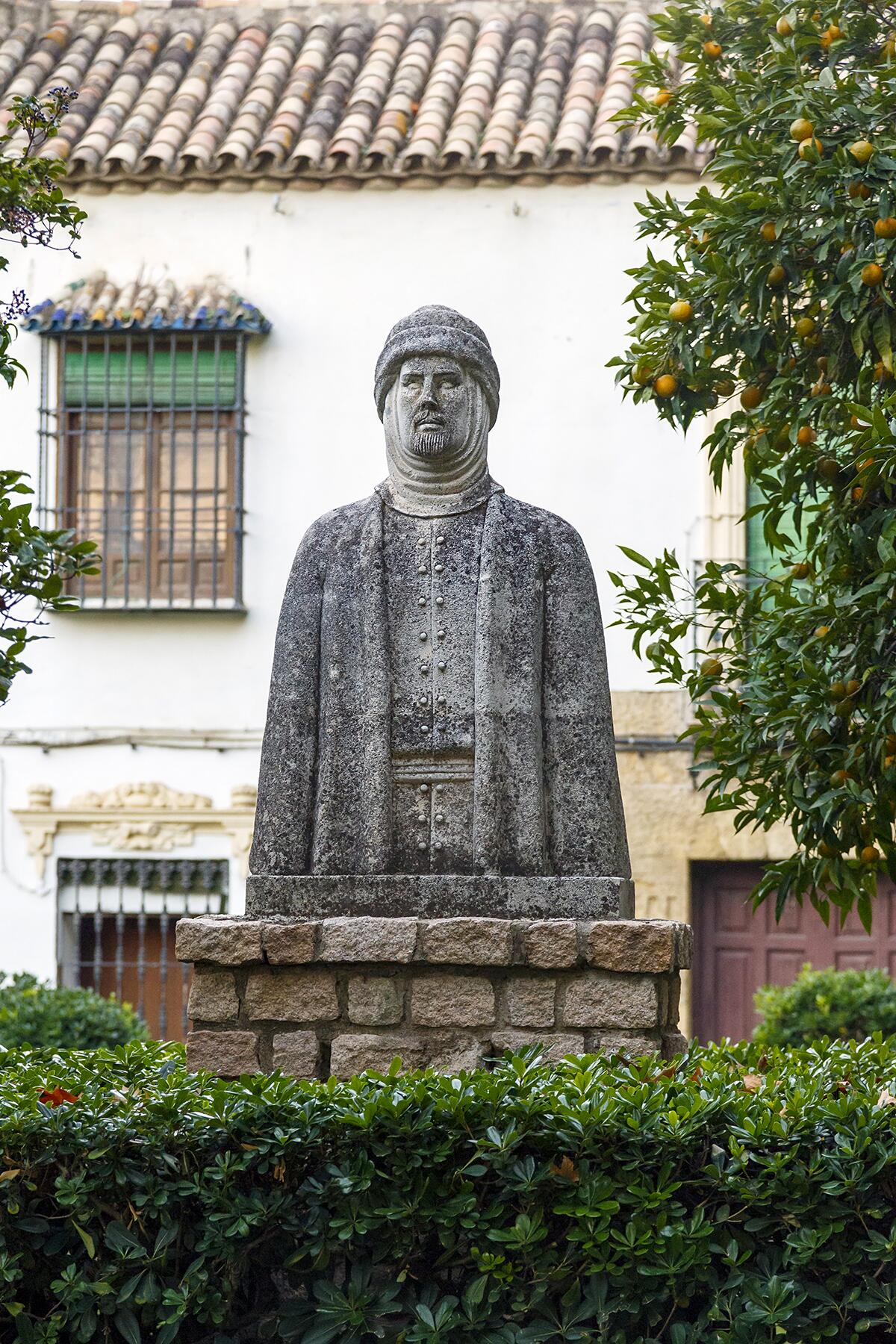 The Caliphate of Córdoba was a powerful Muslim state a thousand years ago spread over what is today Spain and Morocco. The second Caliph of this Caliphate was Al-Hakam II, a peaceful ruler who emphasized education, the arts and sciences, and cooperation with Iberian Christians. He is one of those responsible for the construction of the beautiful Mezquita that still stands in Córdoba. While he did marry a woman who bore him two children, it is said he had her dress as a male and go by the name Jafar to make what was necessary for procreation possible. Al-Hakam II also kept a male harem. His statue has stood near the Mezquita in the Plaza Campo Santo de los Mártires since 1976. 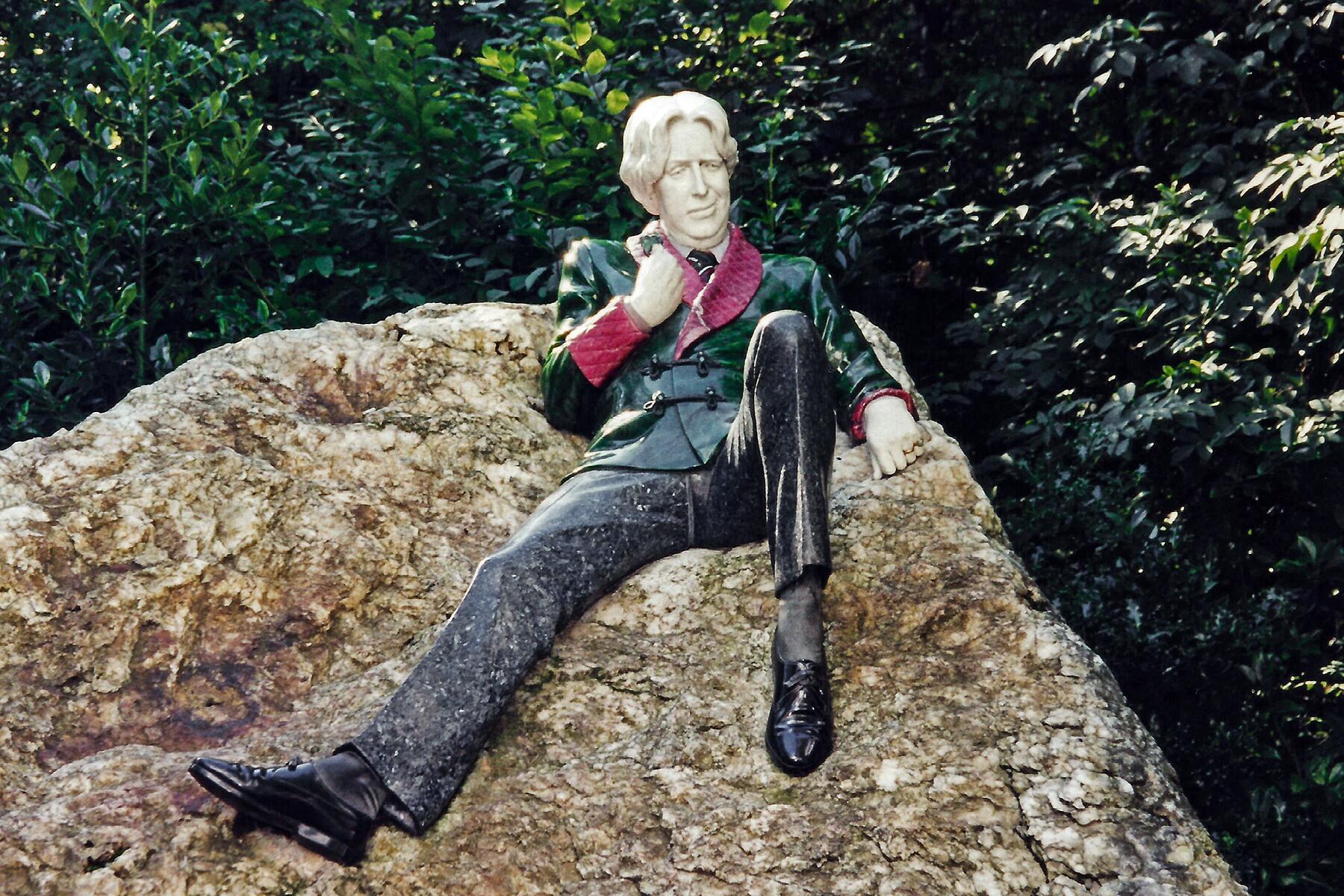 Irish poet and playwright Oscar Wilde was as famous for his scandals as his writing. Convicted in 1895 of “gross indecency” (referring to homosexuality), he served two years jail time and hard labor for his “crime.” Unashamed and commanding before this experience, Wilde lived his last few years out in poor health and exile, dying at the age of 46. His colorful statue in Dublin’s Merrion Square Park shows two different sides of the writer: one half of his face smirking and the other somber, possibly representing his state before and after imprisonment. The figure looks out at two smaller sculptures that are part of the installment: a statue of his nude pregnant wife and a statue of a nude Greek male god. The smirking side looks at the nude man while the somber side faces the nude woman, perhaps indicating his sexual orientation.

INSIDER TIPOscar Wilde’s childhood home is across the park from his statue; just follow his gaze to Number One Merrion Square where the house is identified by a blue historical marker. The house is not open to the public but you can peek at where he lived out his first 24 years. 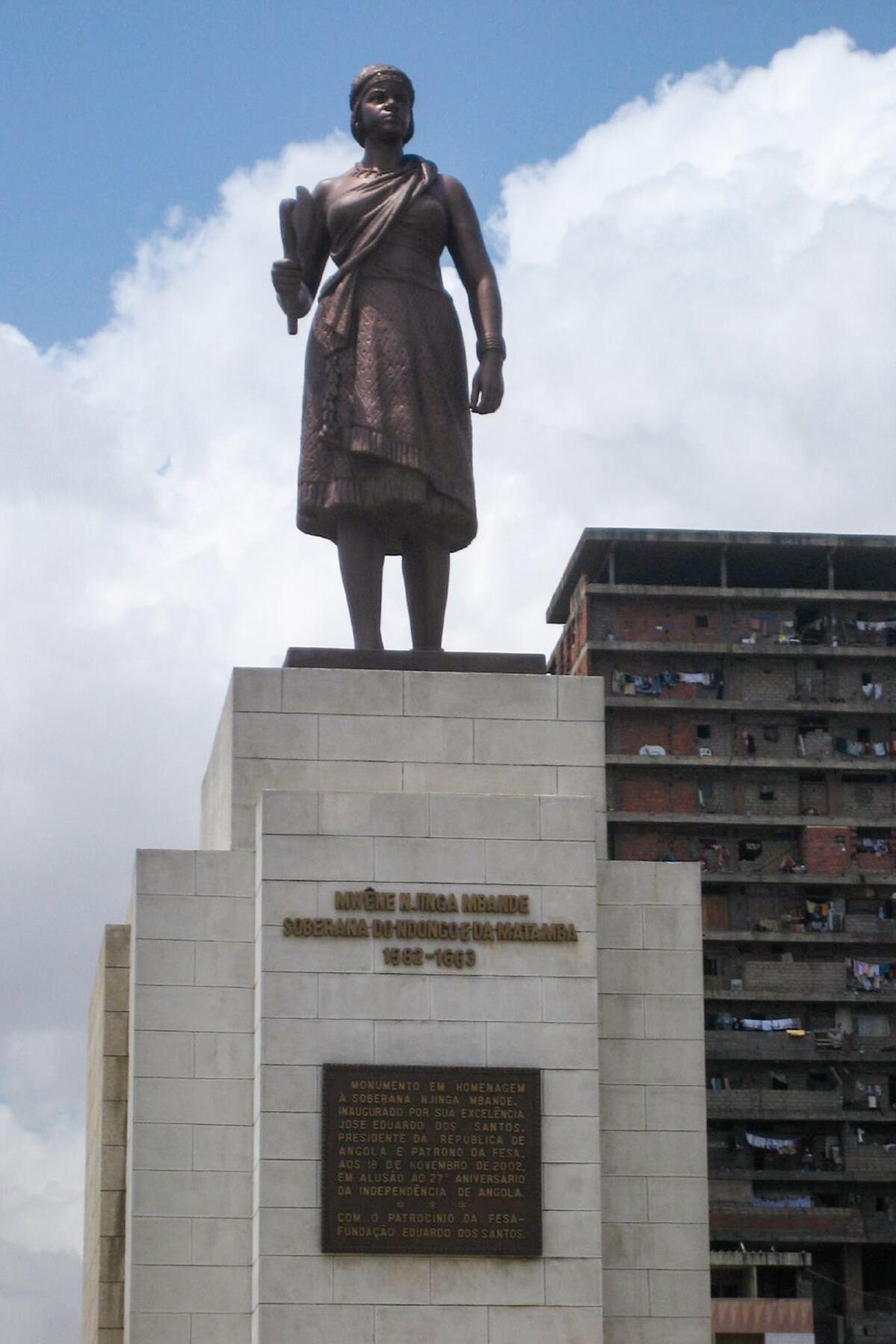 Nzinga (also spelled Njinga) was one of the leaders of African peoples facing the devastation of European colonization and fought back against the slave trade her entire 37-year rule. Rulers of the Ndongo and Matamba were typically male, so Nzinga was considered a “female king” and it is rumored the men in her harem had to dress as women. Her 2002 statue stands tall in Kinaxixi Square in Luanda, depicting her with a battle-ax which she was known for using adeptly. The statue is a popular background for wedding day pictures as couples wish to have their union tied to their history. 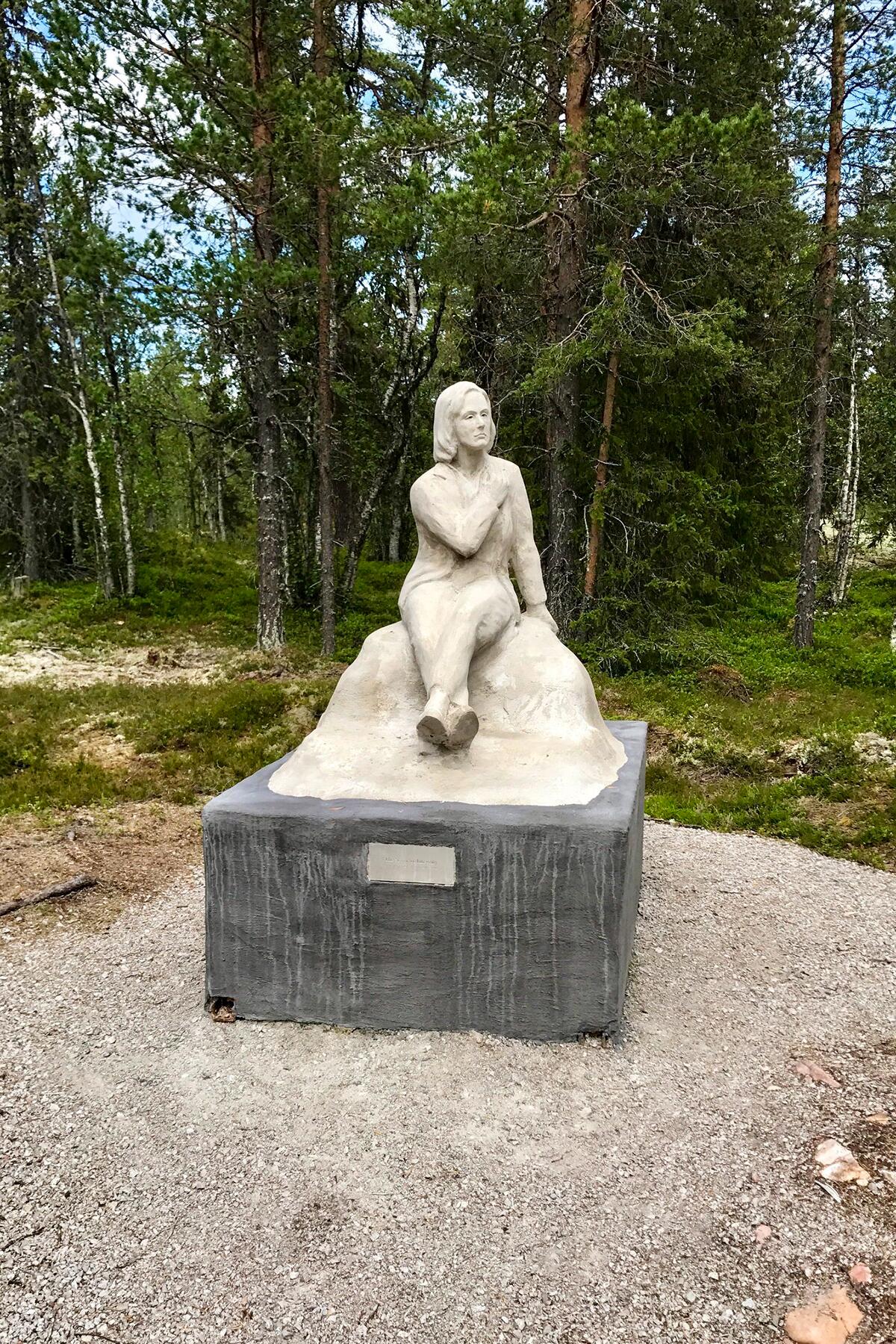 Timeless actress Greta Garbo was known for having a public persona as icy as her Swedish homeland. Despite being an intensely private woman, we do still know she was romantically linked to lesbian writer Mercedes de Acosta for almost three decades. In fact, part of what we know is due to the tell-all book de Acosta sold that infuriated Garbo for exposing her privacy. It’s only fitting that Sweden’s memorial to Garbo places her alone in a remote forest, far from paparazzi flashbulbs or glowing movie screens.

INSIDER TIPTracking down the exact location of the statue is difficult and involves a long hike. If you’re up for some old-fashioned compass work, the coordinates are approximately 61°56’13.2″N 13°56’46.7″E. 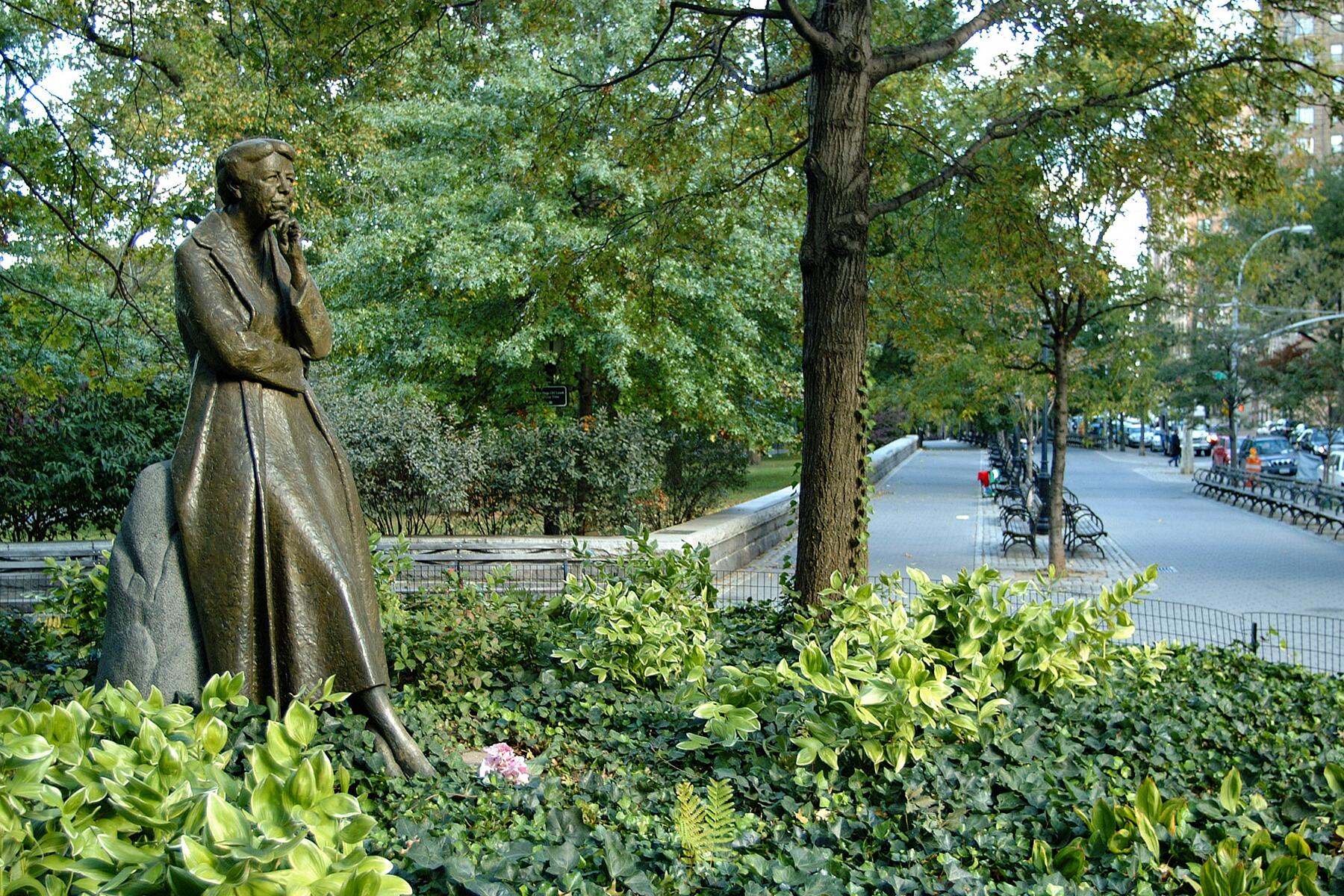 Eleanor Roosevelt’s politics were forever influenced by her group of feminist lesbian activist friends in 1920s Greenwich Village. As a First Lady, she was the first to hold her own press conferences (where she allowed only female reporters, as FDR’s welcomed only males) or speak her mind in her own column, and later was a lead creator of the United Nations’ Universal Declaration of Human Rights. By her side behind the scenes through all of this was Lorena Hickok, Eleanor’s not-so-secret extramarital life partner. Eleanor and Lorena, or “Hick” as she was known, exchanged letters most days they were apart for decades and the surviving 16,000 pages of their correspondence reveal an intimate relationship. The memorial to Eleanor that stands at 72nd Street and Riverside Drive at the corner of Riverside Park includes an inscription calling her “The First Lady of the World.” 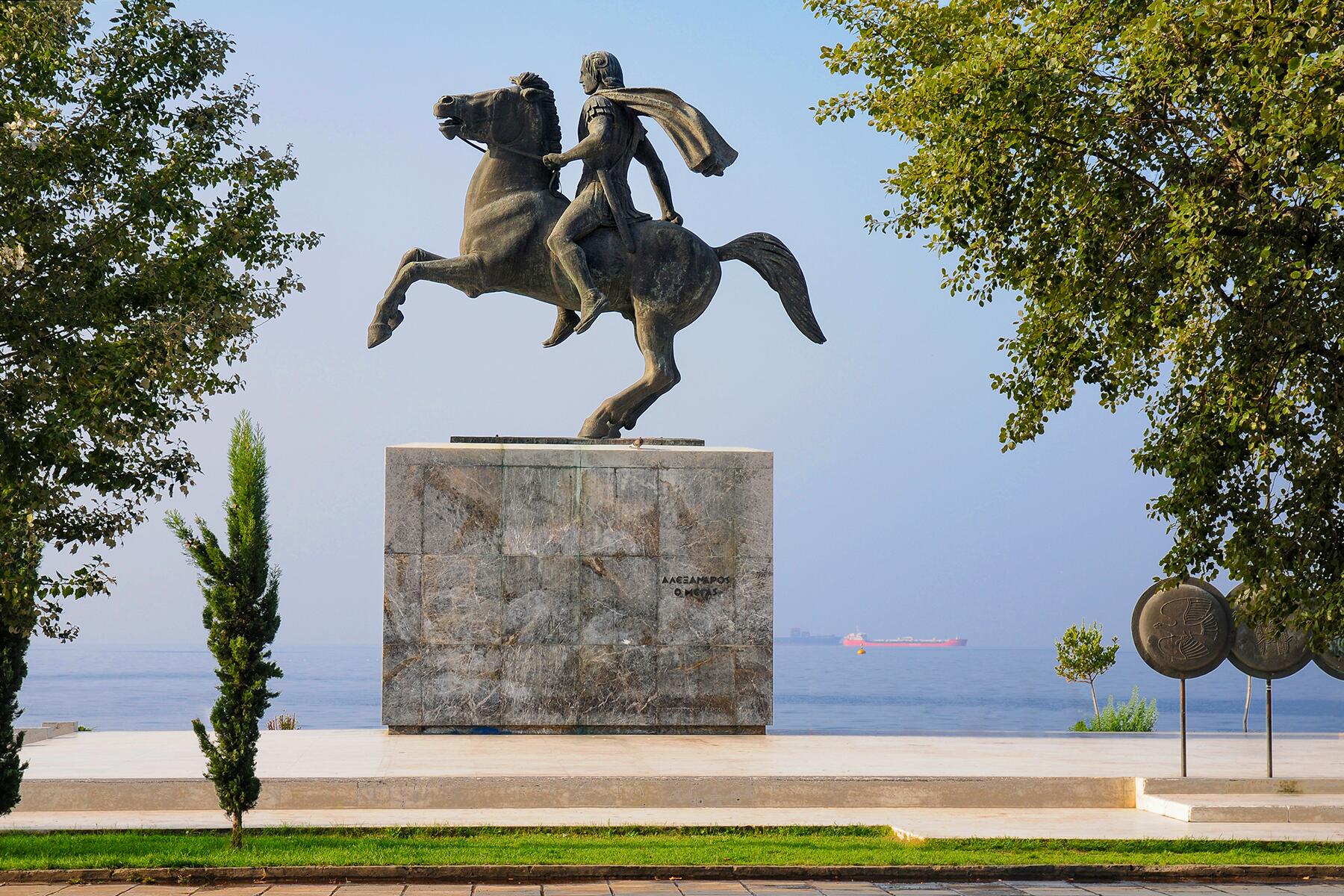 Alexander III of Macedon married three women over his lifetime and scholars also debate the nature of his relationship with his general Hephaestion, described by Aristotle as “one soul abiding in two bodies.” The Kingdom of Macedon was spread over several current countries’ borders in Alexander’s time, creating patriotic tension between modern-day Greece and Macedonia who both claim the conqueror as their own. Alexander, who subjugated over two million square miles, was born in Pella, then the capital of Macedon, and now within Greece. There are enormous statues in his honor in both Thessaloniki, Greece (20 feet tall), and Skopje, Macedonia (79 feet tall), though the one in Skopje is set to be taken down over continuing political controversies over Alexander’s nationality.

INSIDER TIPTo find the Thessaloniki statue, go to the Garden of Alexander (Nea Paralia) between the coast and the YMCA Park. It’s in between the White Tower and the National Resistance Monument. 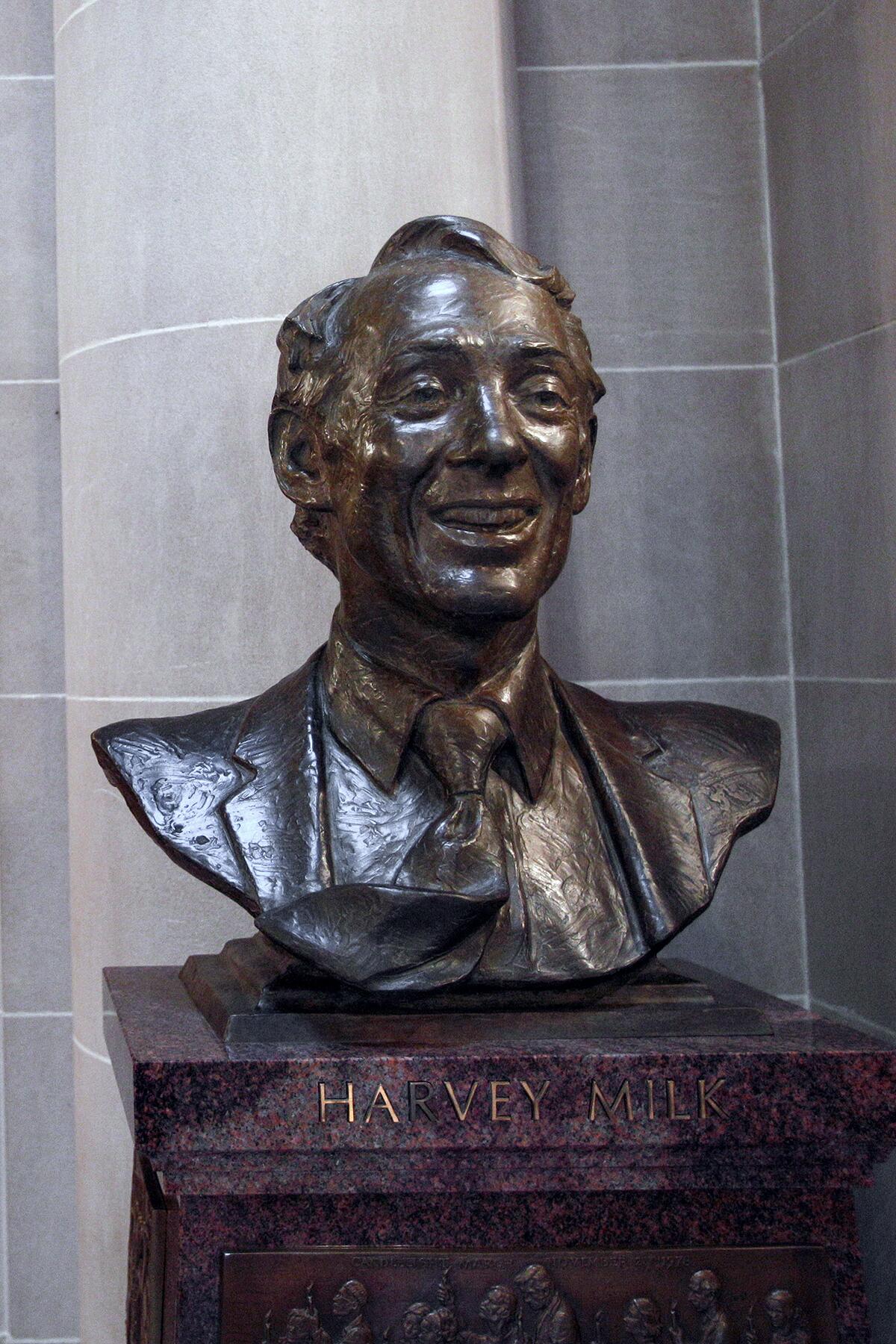 Harvey Milk was one of the first openly gay people ever elected to public office when he became a San Francisco Supervisor in 1978, making him an important icon in LGBTQ history. Tragically, he was murdered less than a year into his term by a fellow city supervisor inside his City Hall office. A bronze bust of Milk was dedicated in the rotunda of San Francisco City Hall in 2008 on what would have been his 78th birthday. Before his death, he poignantly said, “If a bullet should enter my brain, let that bullet destroy every closet door.” 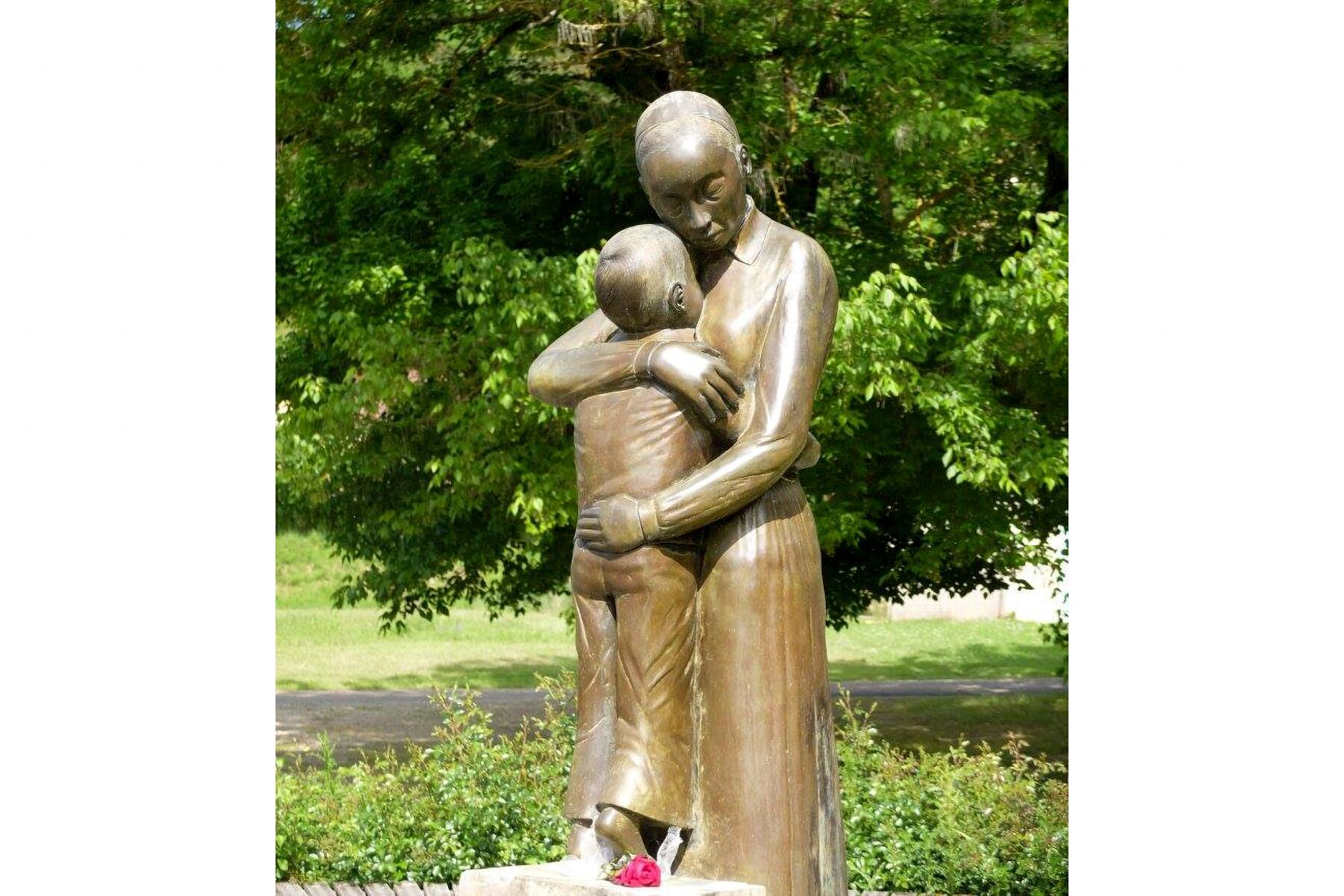 Legendary Josephine Baker grew up in poverty in St. Louis, Missouri, starting to work at eight years old and dropping out of school at the age of 12. She found her way into show business and became an international dance star after moving to Paris at the age of 19, eventually becoming a French citizen in 1937. Baker, who romanced men and women, was also an important Resistance activist during World War II, using her clout to smuggle messages in her sheet music across borders. She also raised twelve children adopted from nine countries on four continents whom she brought up at Château des Milandes in the Dordogne. It is at this château where a statue of her embracing a child resides. 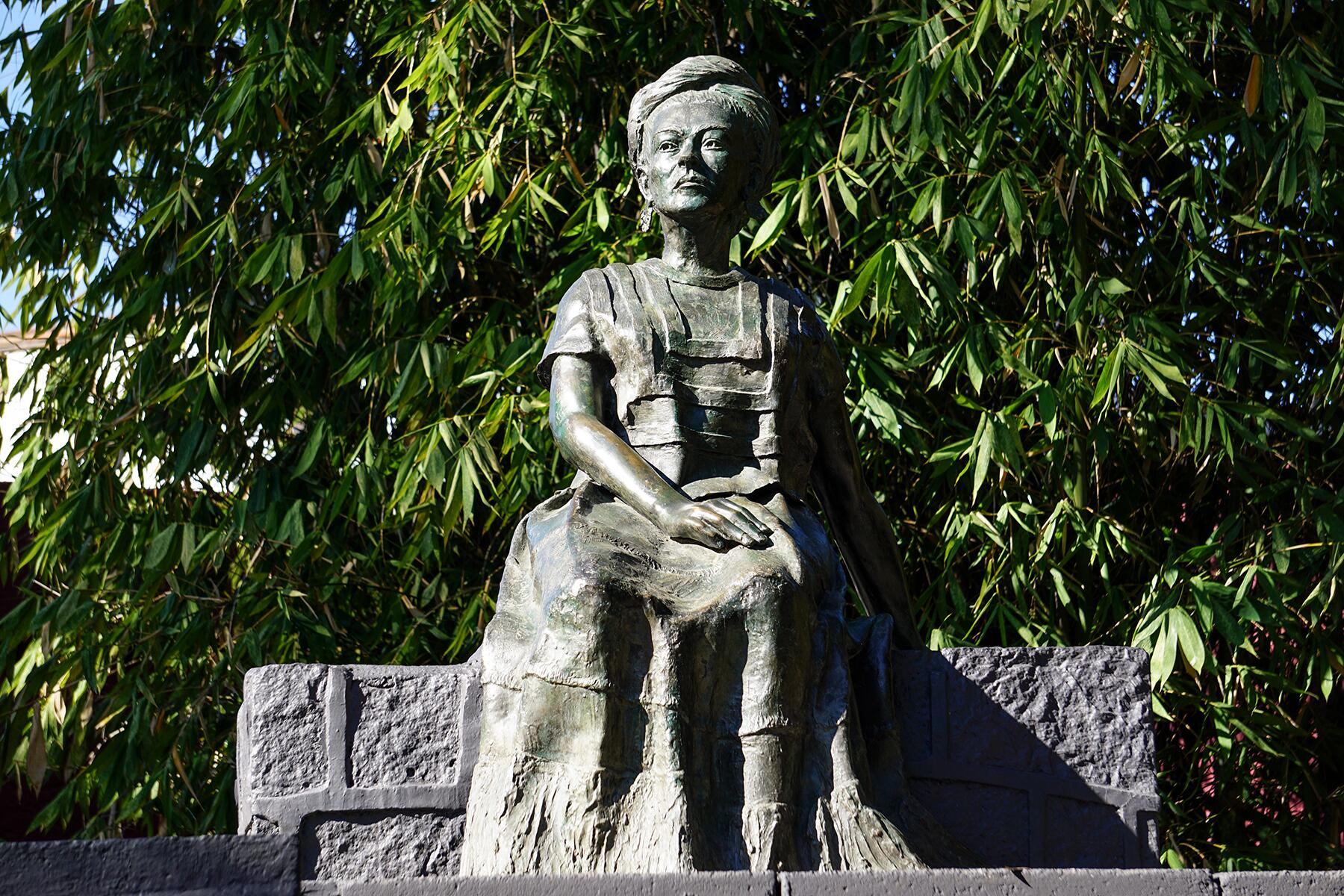 Frida Kahlo and her husband Diego Rivera were both known for being exceptional artists and for intimate relationships with other women while married to each other. Their home, La Casa Azul, is now open as a world-class museum in Mexico City, and in the same neighborhood of Coyoacán, you can find Parque Frida Kahlo. This park boasts a bronze statue of Kahlo in a traditional Tehuana dress. 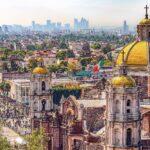 RELATED STORY
A Guide to Frida and Diego’s Mexico City 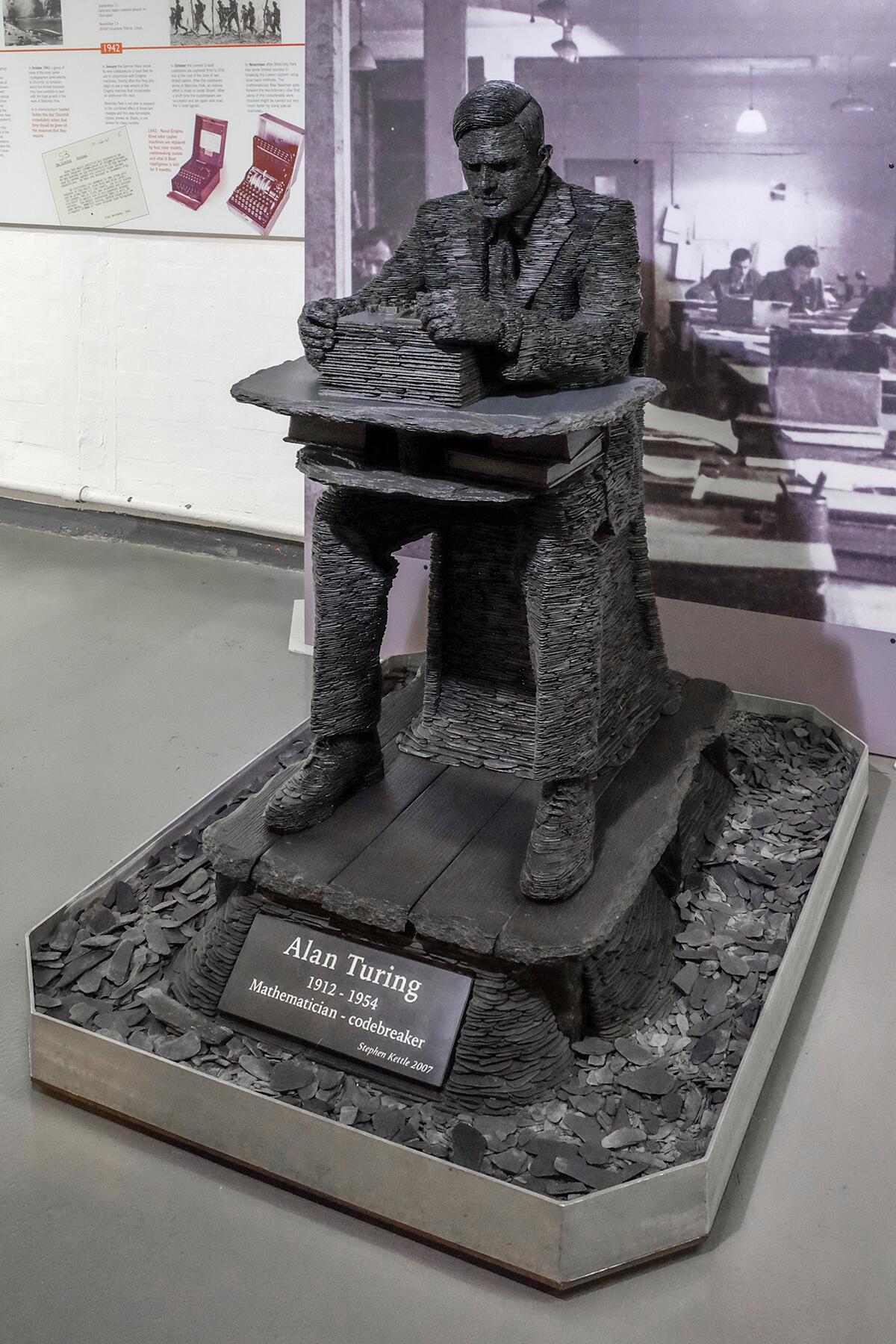 Widely credited as the inventor of the computer, Alan Turing created “universal machines” including one during World War II that was used to break the Nazis’ Enigma Code. This feat greatly helped the Allies’ victory, as dramatized in the 2014 film The Imitation Game. Sadly, his career and life were cut short by homophobia. Convicted in 1952 of “gross indecency” (homosexual acts), he was sentenced to forced hormone injections meant to “cure” his homosexuality. He died two years later at the age of 41 of cyanide poisoning (though it’s debated whether it was ingested intentionally or accidentally). A unique statue composed of half a million pieces of Welsh slate sits in Bletchley Park, an estate that was converted into the home of the British Government Code and Cypher School during World War II where Turing carried out his groundbreaking work, now a public museum.

INSIDER TIPThe statue is actually in the National Museum of Computing within Bletchley Park. The museum has a separate admission fee and a separate entrance.

Magnus Hirschfeld lived in Germany as a gay Jewish man until he left in early 1933, never to return. The Nazis burned his life’s work at the Institute of Sexology not long after his escape. Hirschfeld was a pioneer of public advocacy for LGBTQ rights and scientific research on LGBTQ people, even founding the world’s first LGBTQ rights organization in 1897. A bust of this hero can be found in Berlin’s Schwules Museum, the first museum in the world dedicated to LGBTQ history. 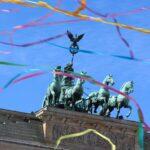 RELATED STORY
An LGBTQ Guide to Berlin
Talk to us!Login or create an account to comment
Login Register
0 Comments