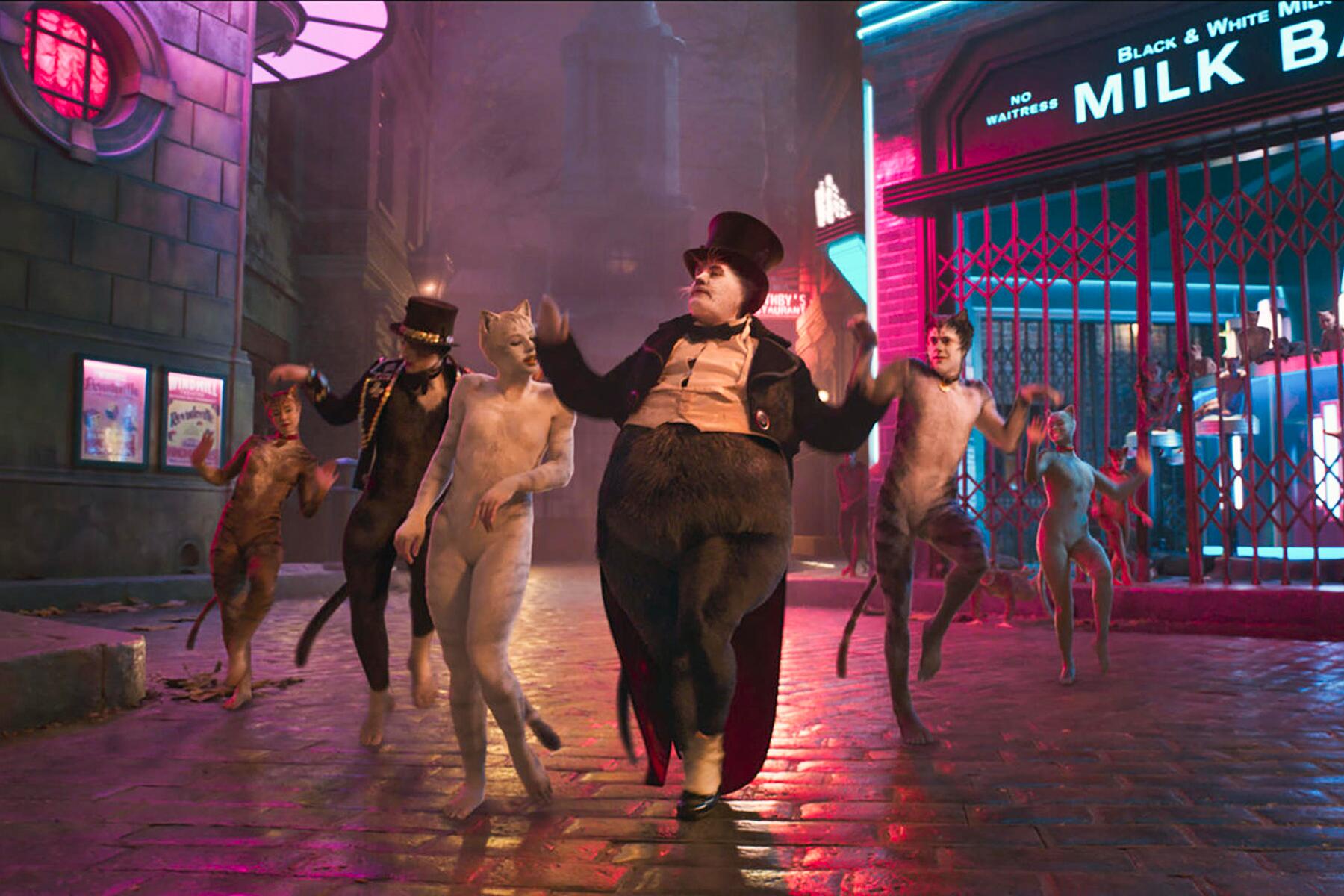 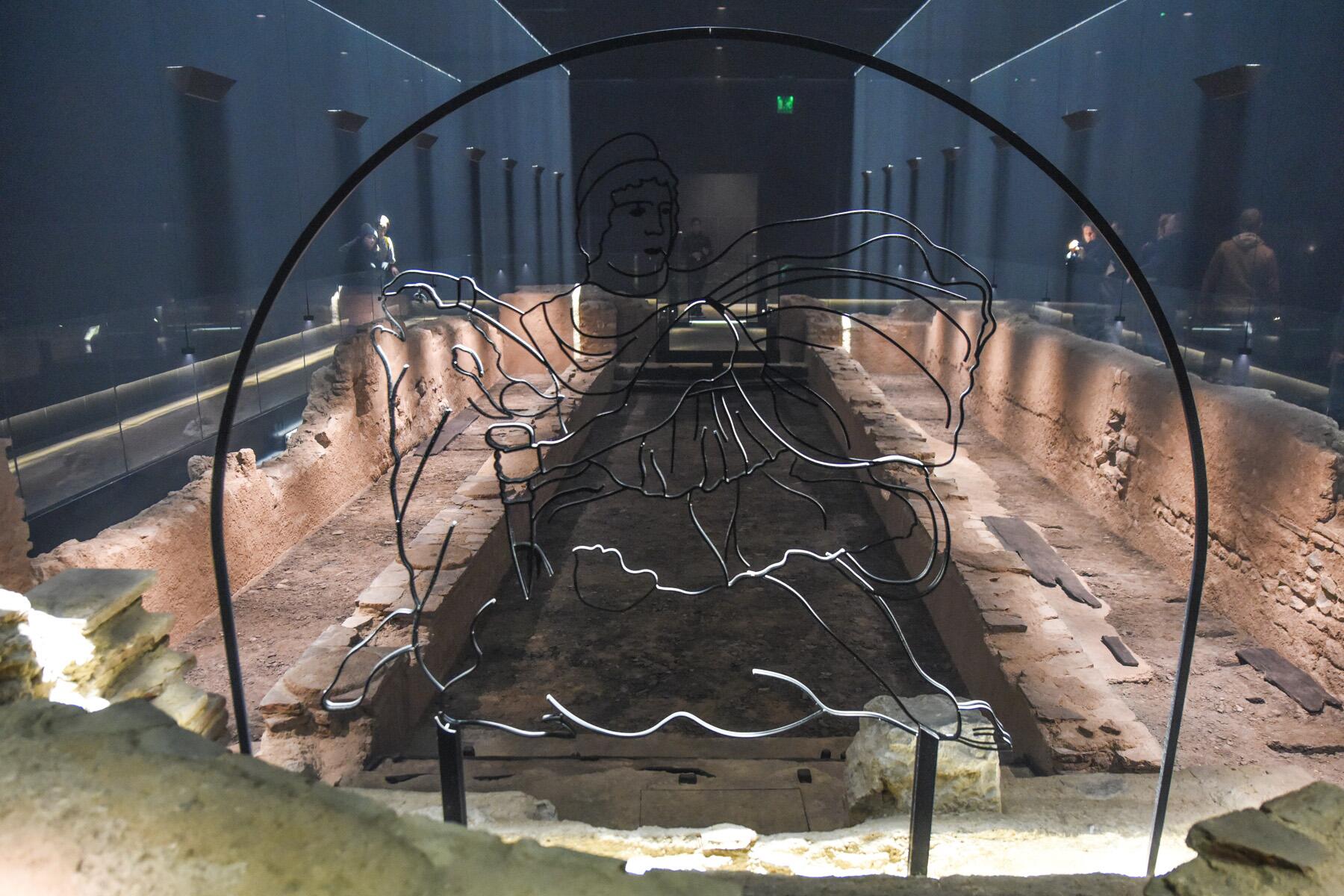 In the countries that make up the former Soviet Union, its satellites and allies, these powerful monuments have not yet been forgotten.

Beauty often fades, as does our fascination with buildings and monuments built to glorify or represent ideals that seem somewhat antiquated today. With the collapse of the Soviet Union in 1992, many of the memorials and grand structures embodying the military, economic, and scientific achievements of the Soviet experiment were gradually (or quickly) torn down, or else neglected, left in states of disrepair, or even abandoned altogether.

Some of the most impressive—and often intimidating—Soviet monuments are still standing today. Some have been forsaken, while others are tended to, yet almost all of these eerily stunning structures, left behind by Europe’s former communist states, have a story to tell about the political world that once was. 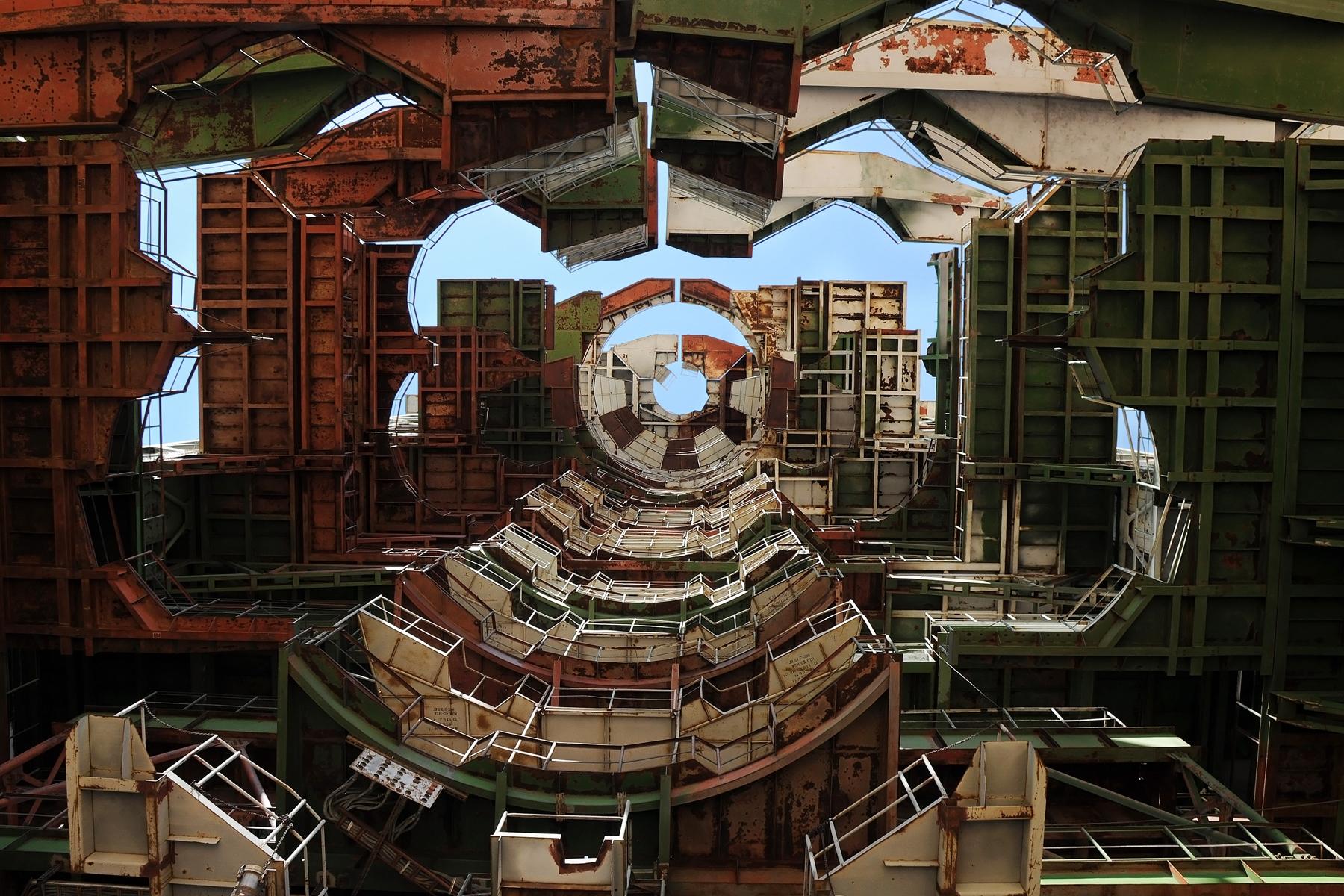 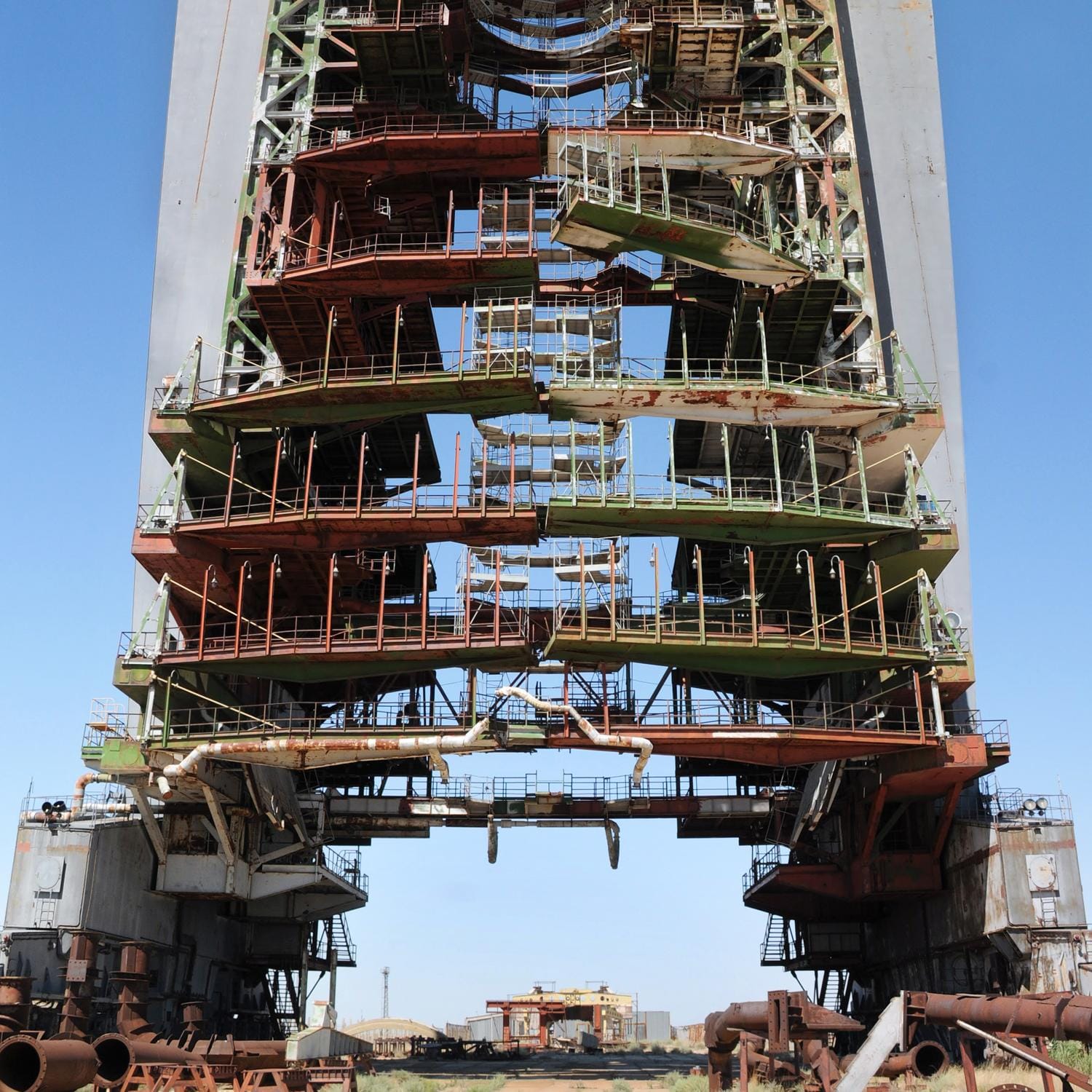 PHOTO: vicspacewalker/ Shutterstock
Previous Next
1 OF 14

While the Soviet Union never launched a space shuttle into orbit, it was something that was on the mind of some of the Soviet space program’s biggest brains. To this day, two abandoned Soviet space shuttles can be seen, slowly disintegrating after decades of neglect, inside a jarringly quiet, yet massive abandoned hangar located at the still active Baikonur Cosmodrome spaceport in Kazakhstan. This enormous space, once dedicated to sending human beings into actual outer space, is a magnificent spot for urban explorers to roam around—provided they can get permission, or find a way in. 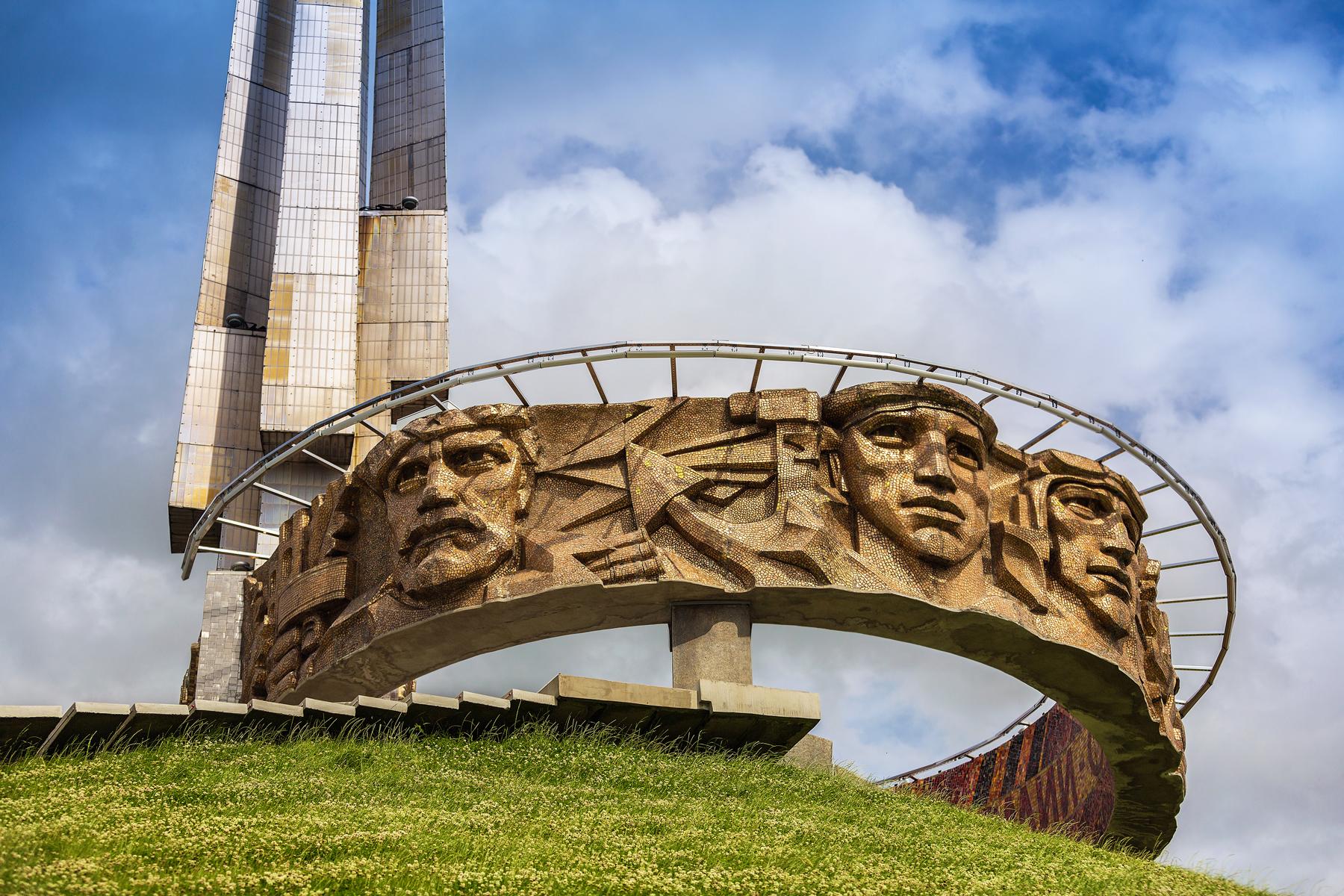 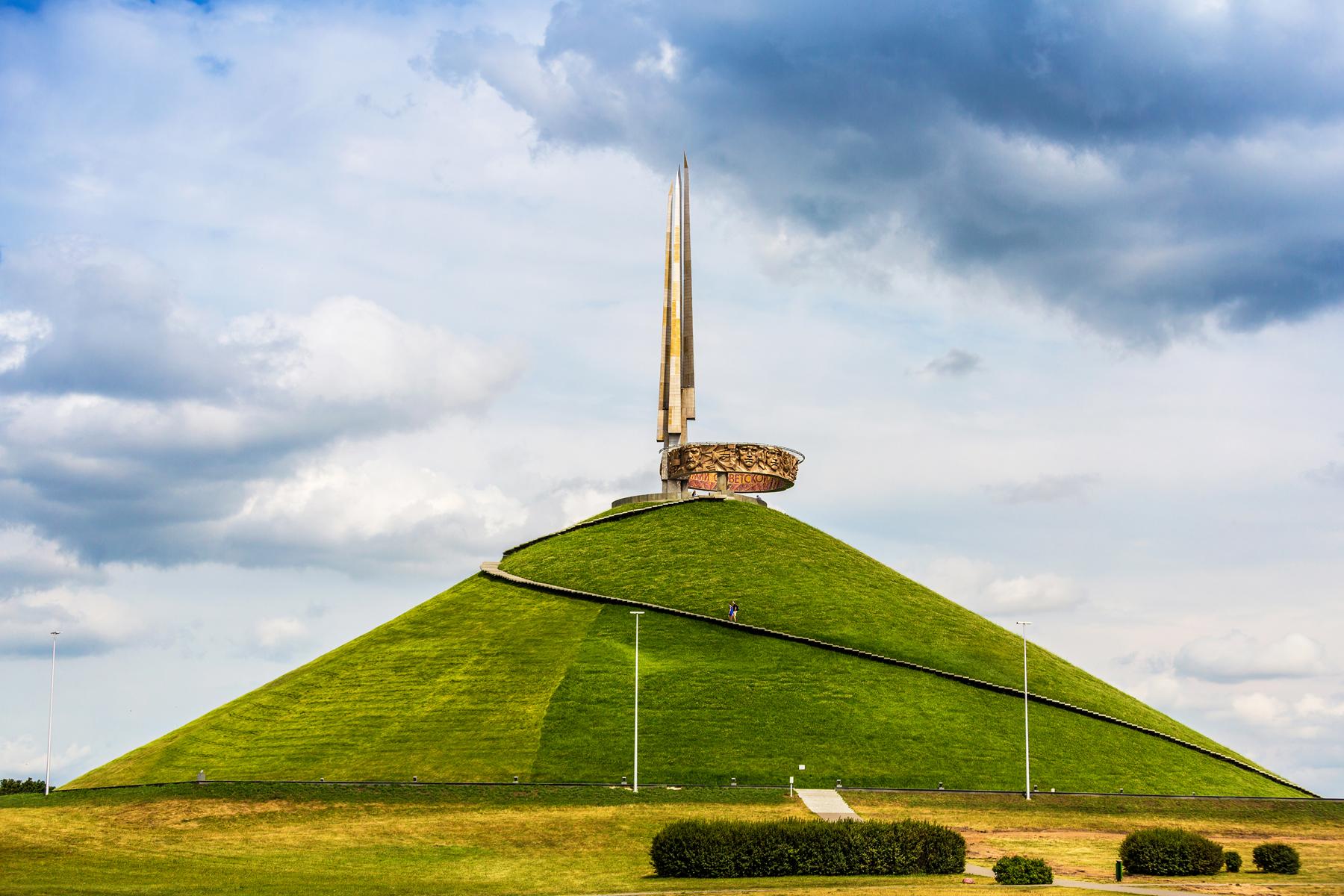 PHOTO: S.O.E./Shutterstock
Previous Next
2 OF 14

Many of the forsaken monuments left behind by different Soviet states commemorate efforts to beat back the Nazis during WWII. In Belarus, the Mound of Glory, just outside the capital of Minsk, venerates the resolve of the Red Army to free Belarus from German control during Operation Bagration, in 1944. The bayonet-styled structure is built atop an artificial mound, with 240 steps to the top. The panoramic views here are often used as a backdrop for newlyweds looking to snap some unforgettable wedding photos. 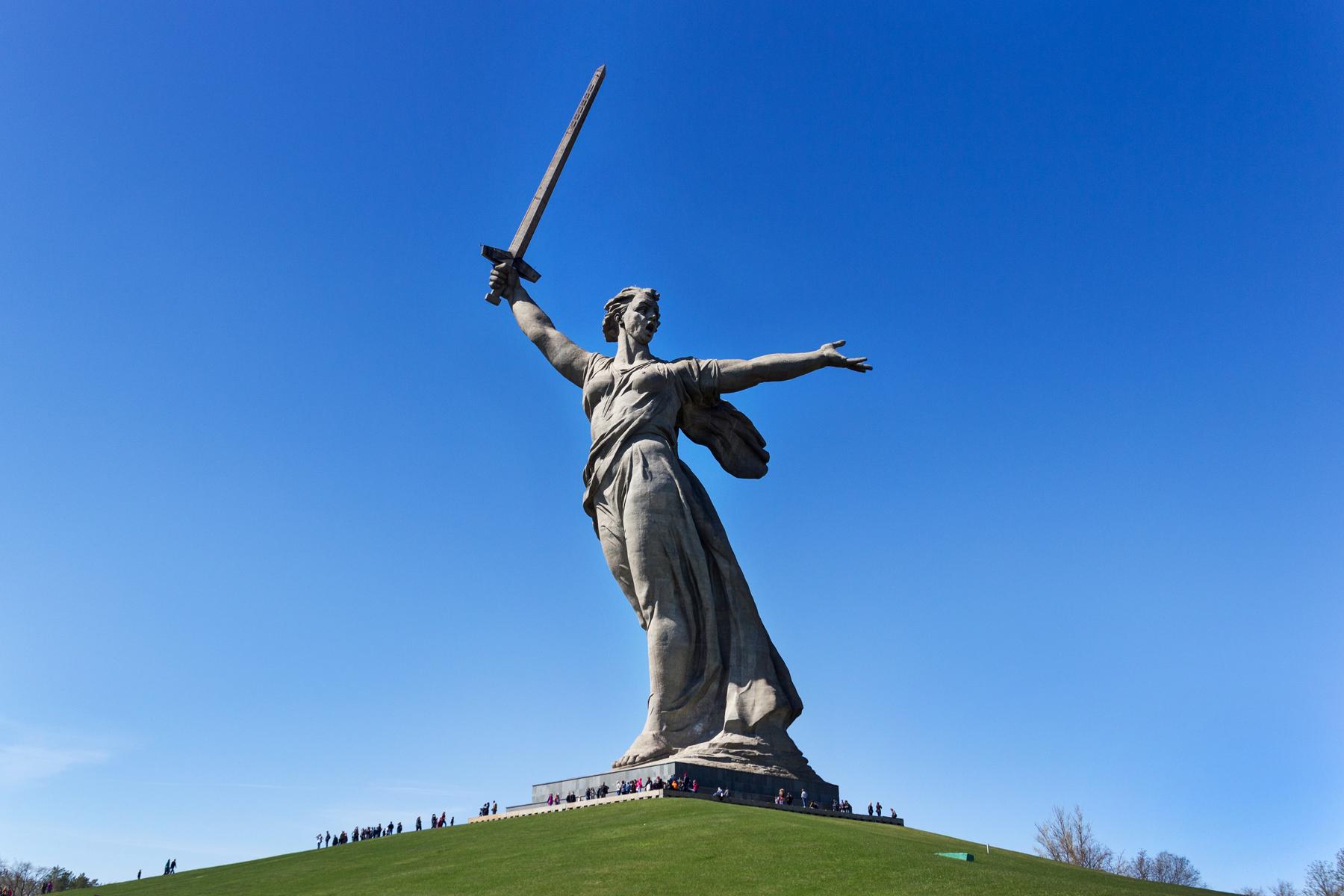 The Motherland Calls is one of the world’s tallest statues, rivaling New York’s Statue of Liberty in height (and is, in fact, larger in size than Lady Liberty). Situated in Volgograd (formerly Stalingrad), on the left bank of the Volga River, The Motherland Calls is a ginormous work of art, honoring the enormous sacrifices of the “Heroes of the Battle of Stalingrad.” This behemoth sculpture, perched atop Mamayev Kurgan Hill, depicts a woman raising her massive steel sword skyward, which in addition to being a sight you’ll never forget, just might serve as a fierce deterrent to any foreign army thinking about messing with the people of Volgograd ever again. 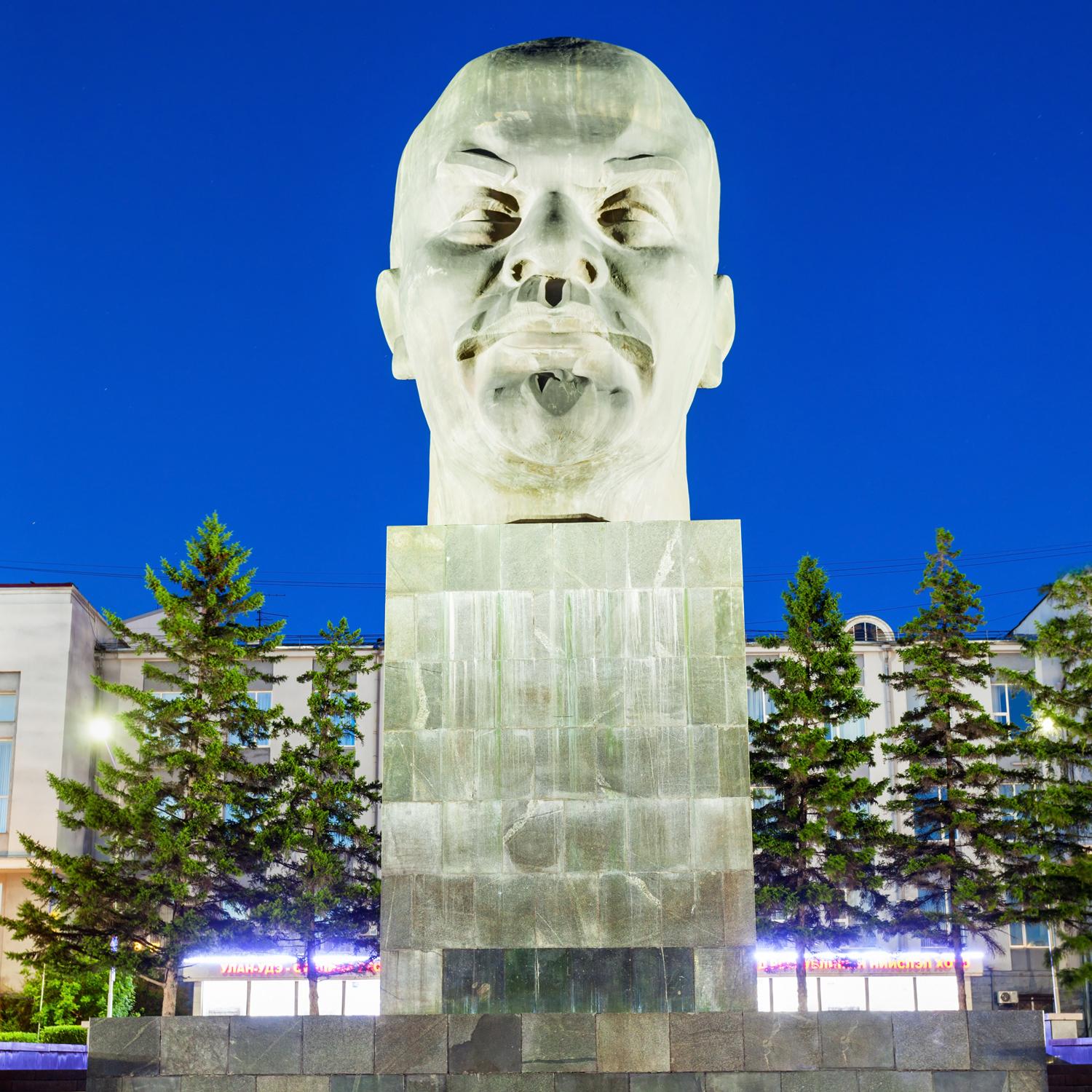 In Soviet Russia, after the leader Nikita Khrushchev began the reform process of de-Stalinization, the writings of Vladimir Lenin were elevated to the status of something akin to holy (Marxist) scripture. To get ahead in Russia at that time, you needed to be intimately acquainted with Lenin’s ideology—or, perhaps as a shortcut to political power, you could simply commission the sculpture of a hulking Lenin head. In Ulan Ude, Siberia, near Lake Baikal, local authorities came together in the early 1970s and did just that, creating the world’s largest Lenin head. Lenin’s massive bronze noggin is still a popular meeting place for locals today, and a big attraction for tourists as well. 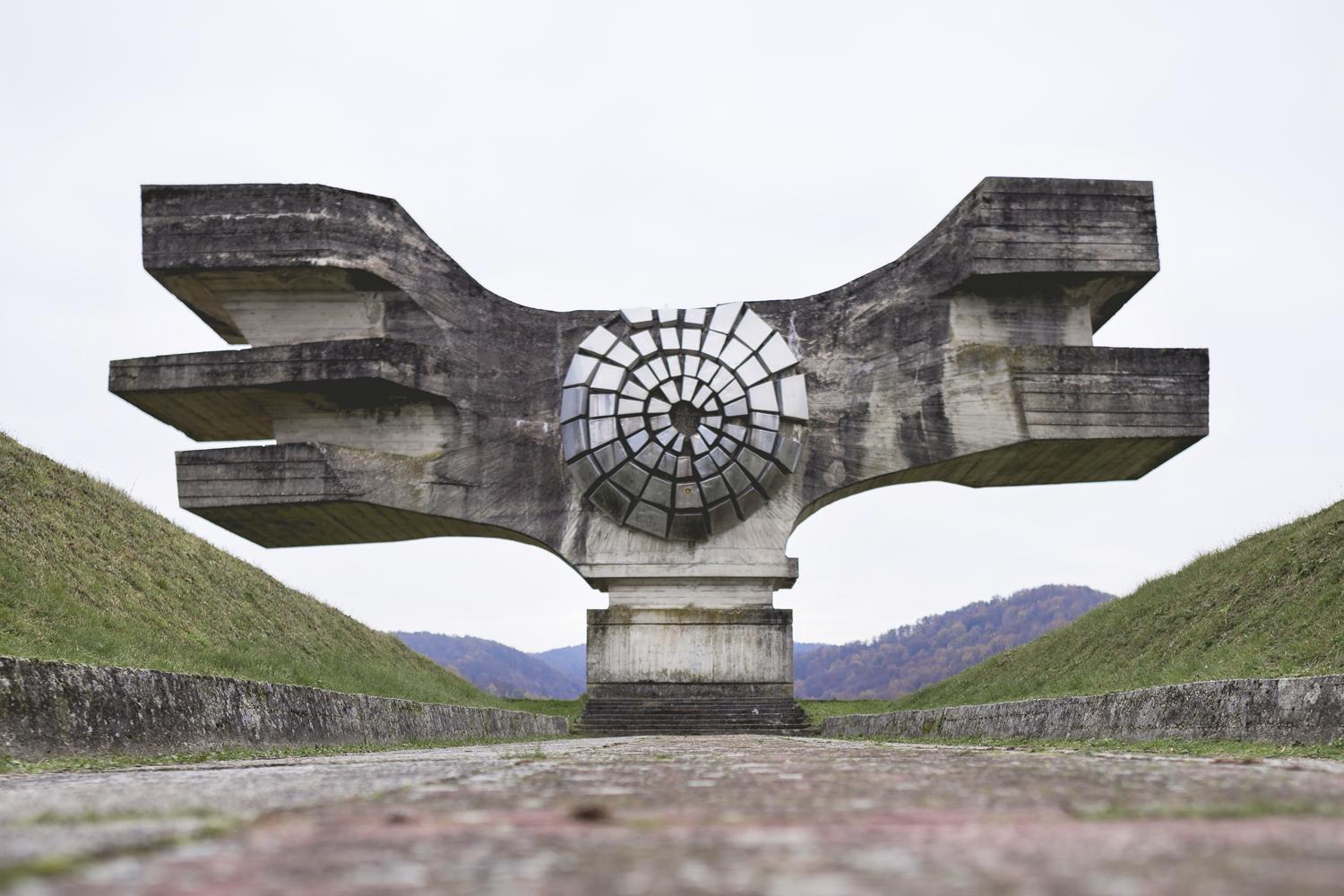 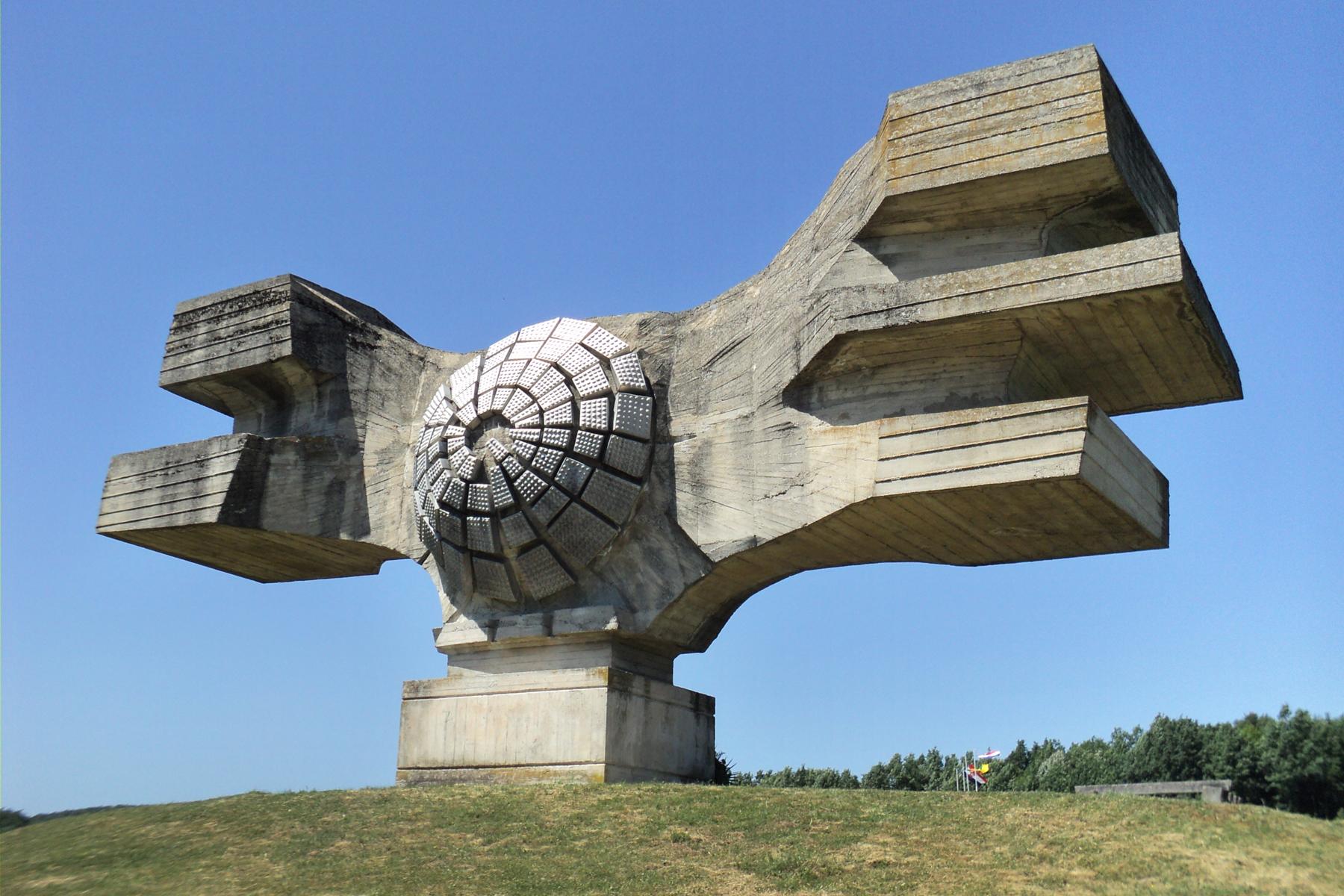 Monument to the Revolution

Like a giant version of the wings an airplane pilot wears, Croatia’s Podgaric Monument to the Revolution, sitting atop a grassy hillside, stretches out like some kind of concrete-encased mechanical hawk ready to take flight. Commissioned by the Yugoslavian leader Tito, and designed by the Macedonian sculptor Dušan Džamonja, this abstract, bird-like monument—like so many of the monuments built in the former Yugoslavia—honors the uprising of local forces against the German Reich. And like so many memorials in the region, this imposing sculpture has been forgotten by many, and has begun to deteriorate. 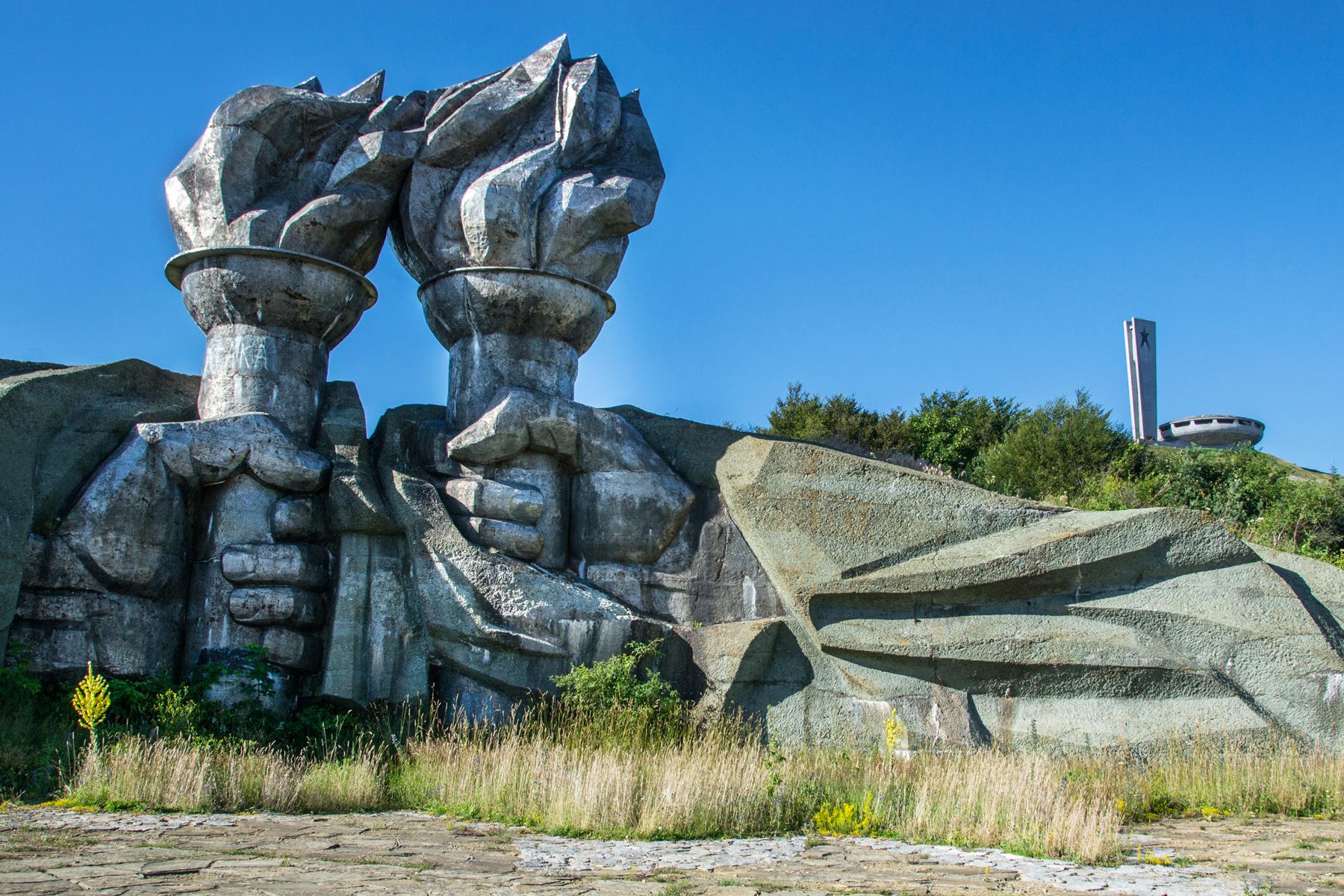 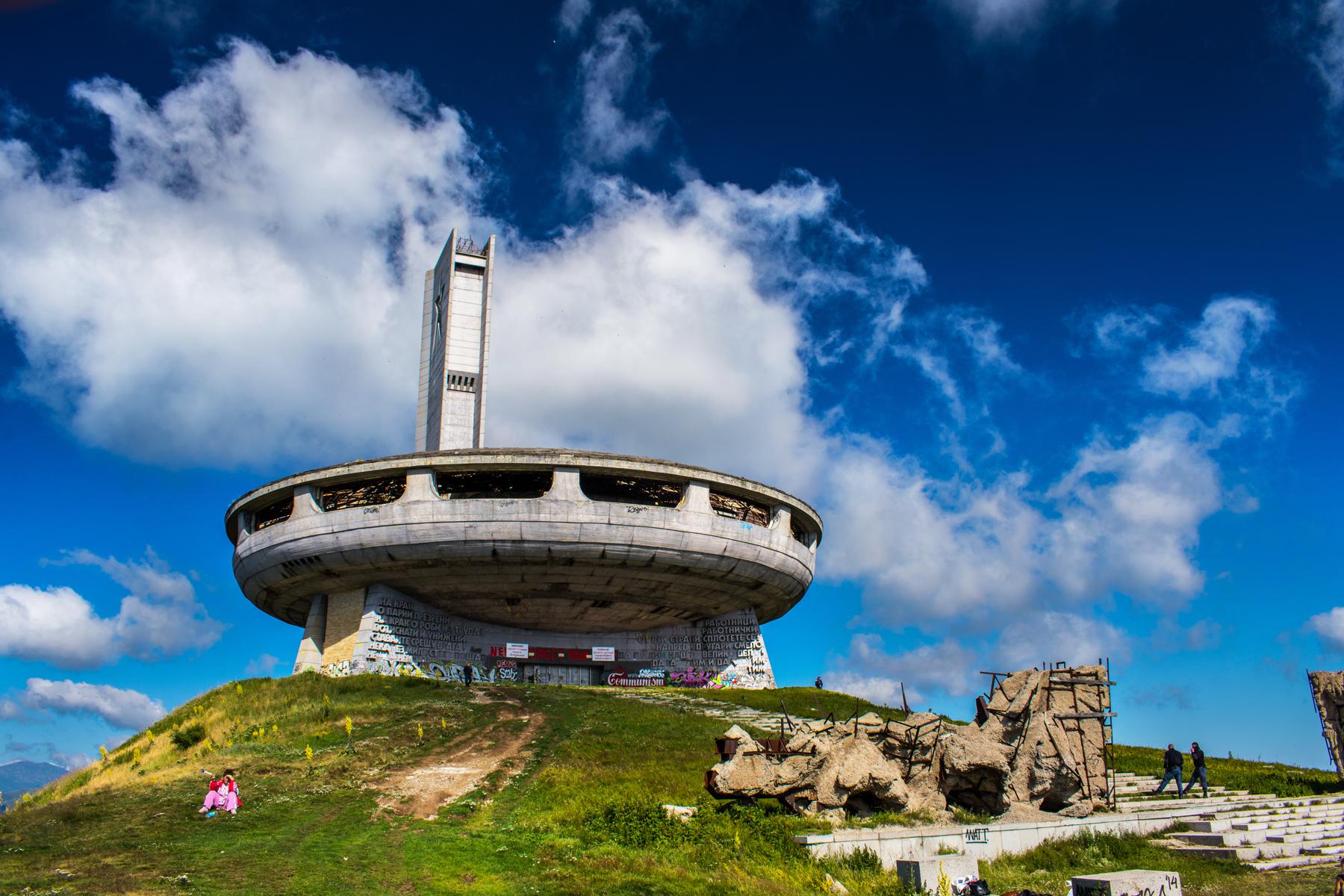 PHOTO: Christian Wilkinson/Shutterstock
Previous Next
6 OF 14

If you want to step inside a structure with an uncanny resemblance to a flying saucer, travel to Bulgaria and take a spin through the derelict Buzludzha Monument. This saucer-shaped structure was built atop an excavated mountain peak (Buzludzha), in the Balkan Mountains. Bulgarian authorizes commissioned the monument to celebrate Dimitar Nikolov and the meetings he organized in 1891, which sparked the founding of Bulgaria’s socialist movement. The Buzludzha Monument, completely abandoned now, has been a favorite spot for graffiti artists over the years—although at more than 4,600 feet in altitude, it isn’t the easiest place on the planet to reach, or tag. 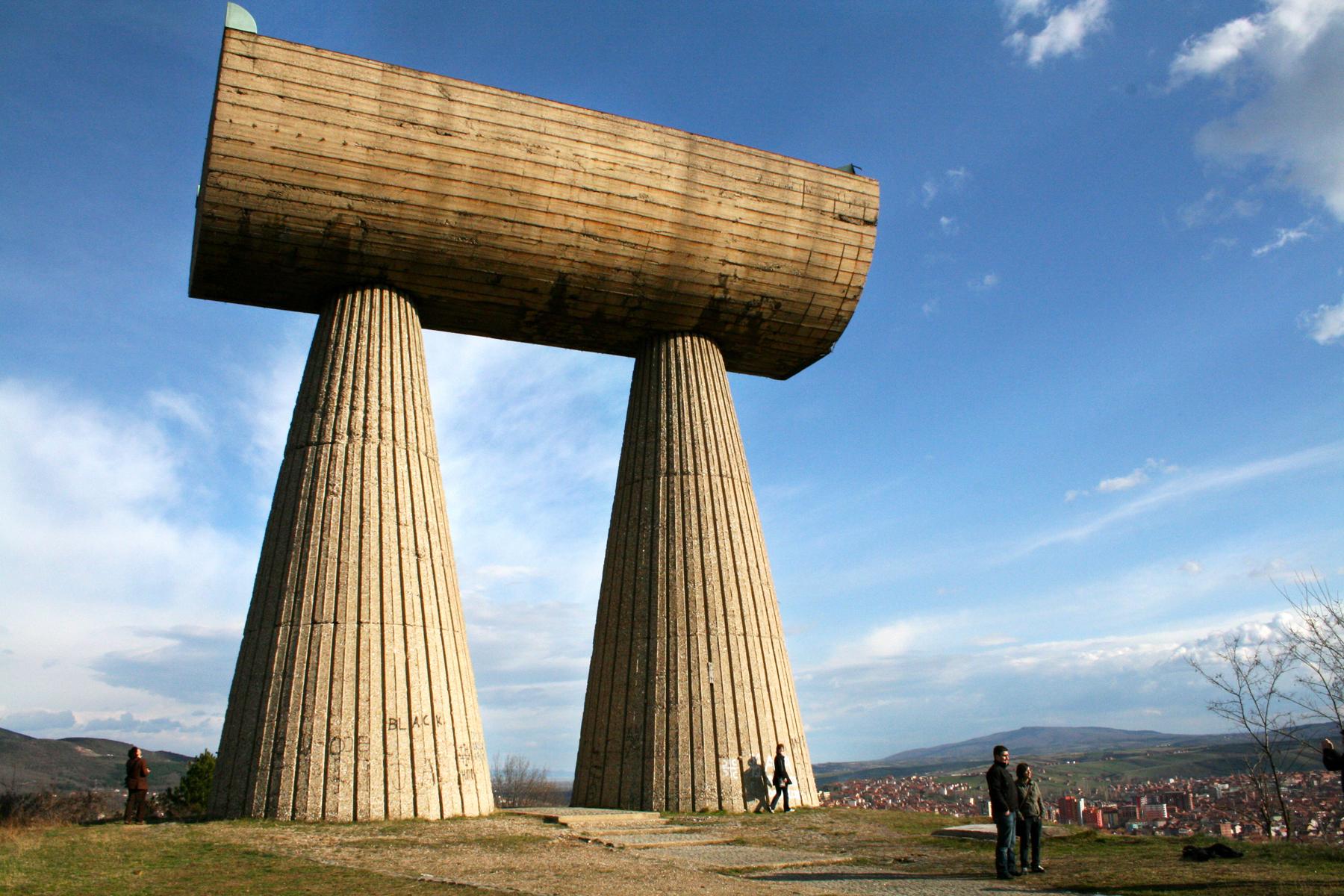 While wandering around Kosovo’s Mitrovica District, you might happen upon the Monument to the Mining Heroes, also known as “the grill.” This oversized Stonehenge-esque monument, comprised of two massive columns supporting an enormous mining cart, is yet another example of a Tito-commissioned sculpture meant to display the splendor of the former Yugoslavia’s history and might. In this instance, the monument, resting atop Miner’s Hill, was built to venerate the sacrifices Albanian and Serbian miners made during the Second World War. 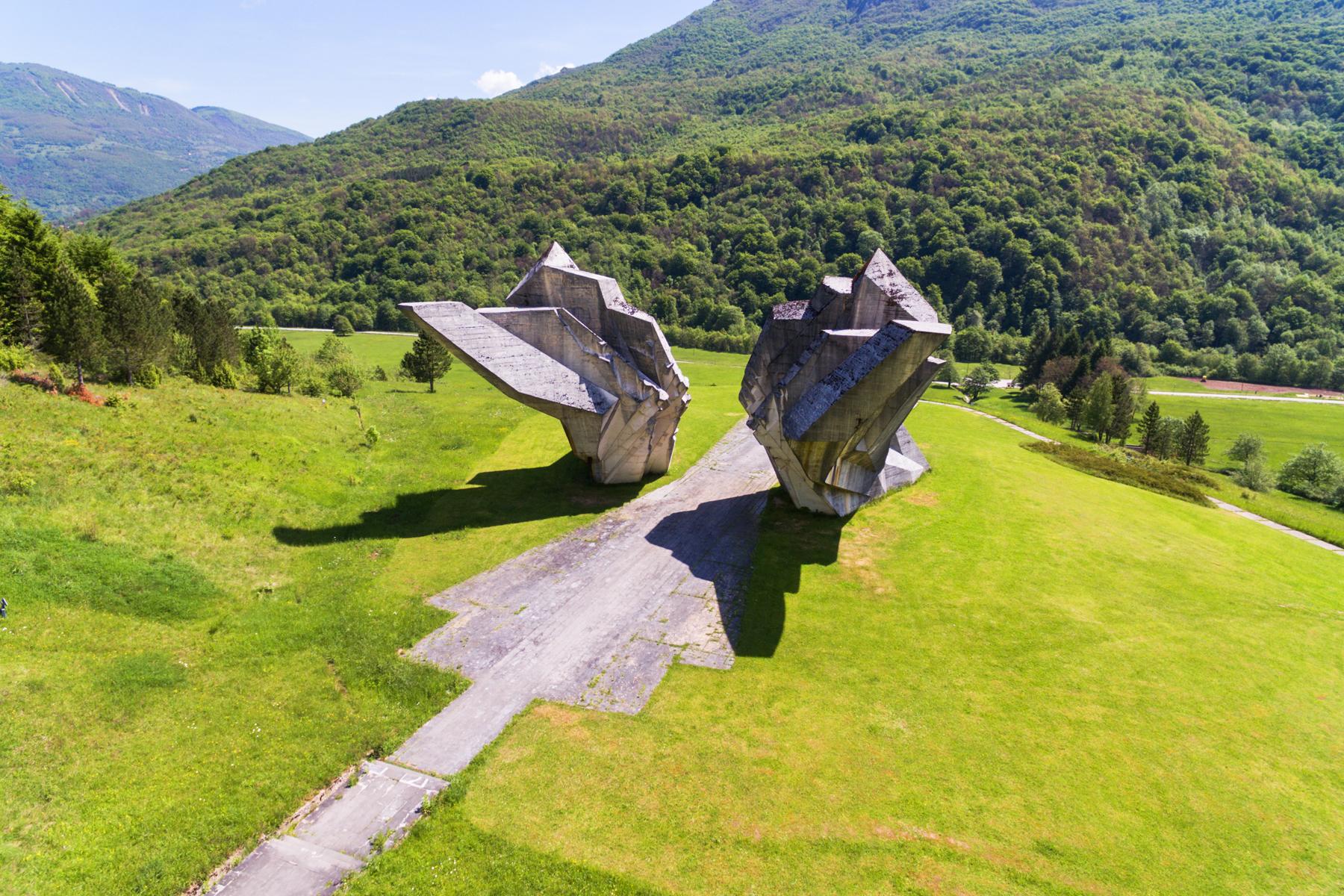 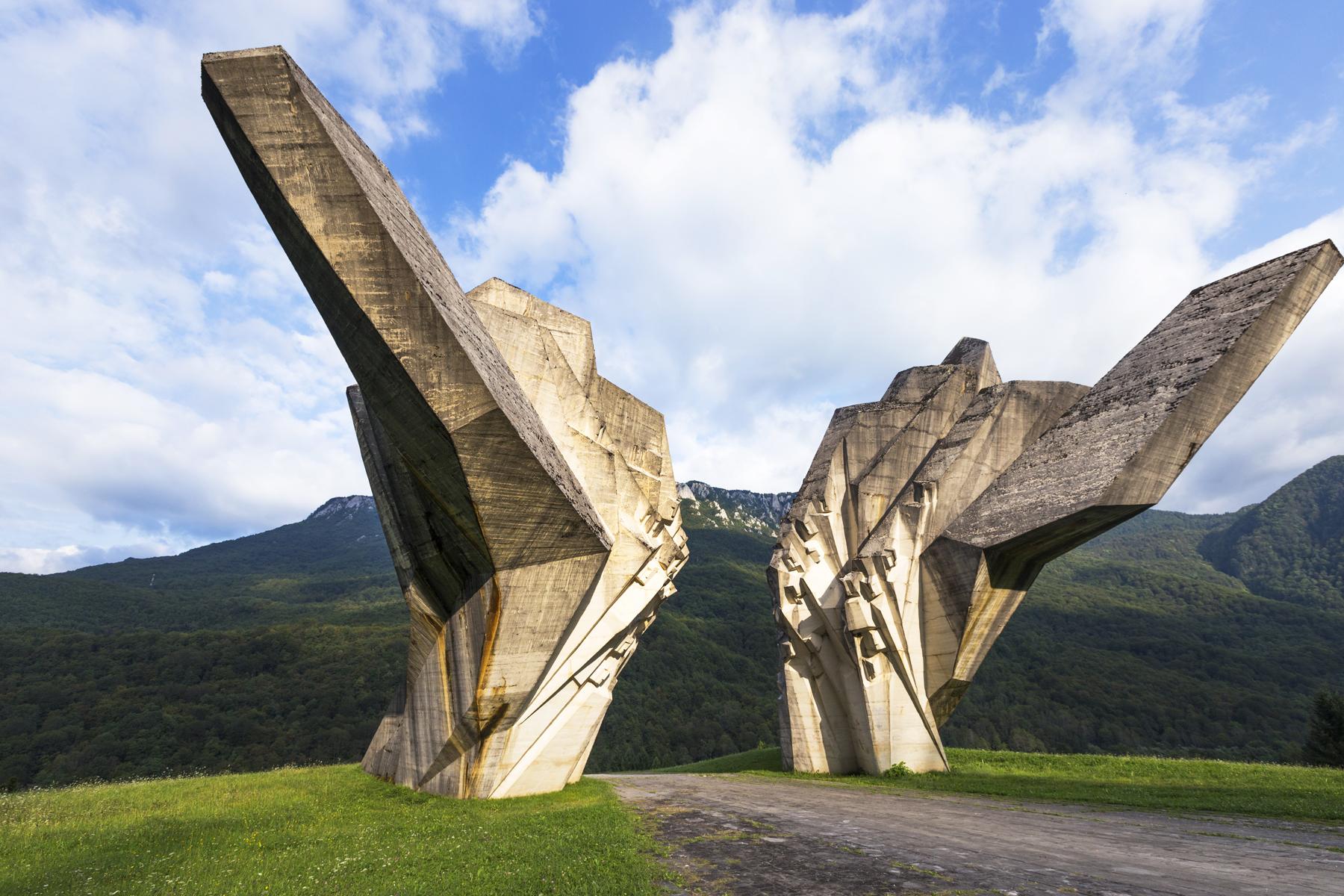 PHOTO: novak.elcic/ Shutterstock
Previous Next
8 OF 14

The Tjentiste War Memorial, which is part of the Valley of Heroes complex, lying in the southeastern part of Bosnia and Herzegovina, memorializes the Battle of the Sutjeska. The craggy-looking, wing-like columns, which form a kind of gateway and concrete altar, were set up to remind the living of the brutal battle and escape that took place nearby in the spring of 1943. The Yugoslav Partisans, after heavy fighting, were able to evade total annihilation by the attacking Axis forces—although not without sustaining a heavy human toll. More than 7,000 Partisans and civilians died at the hands of Germany, and her military allies, during the battle, and afterward. 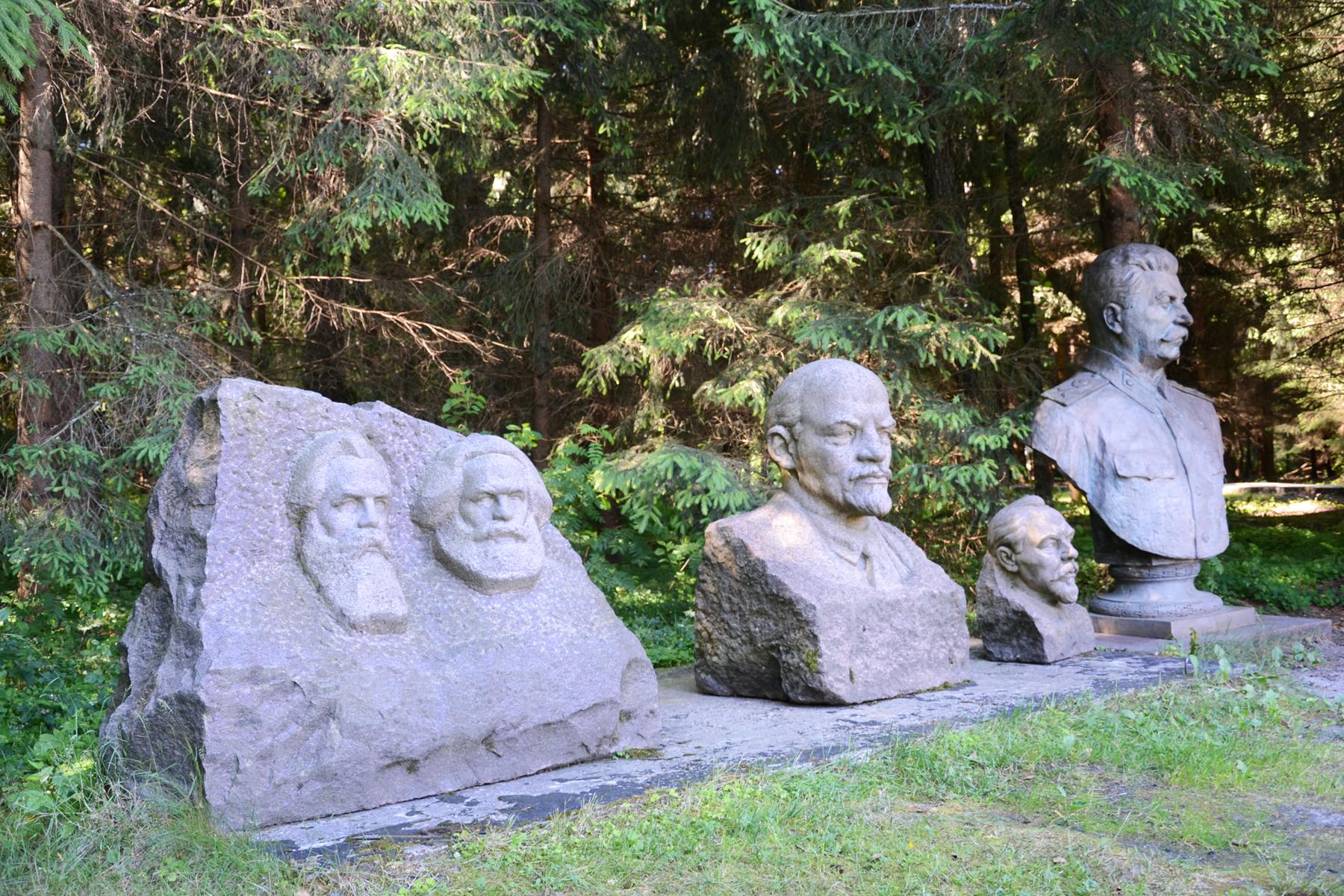 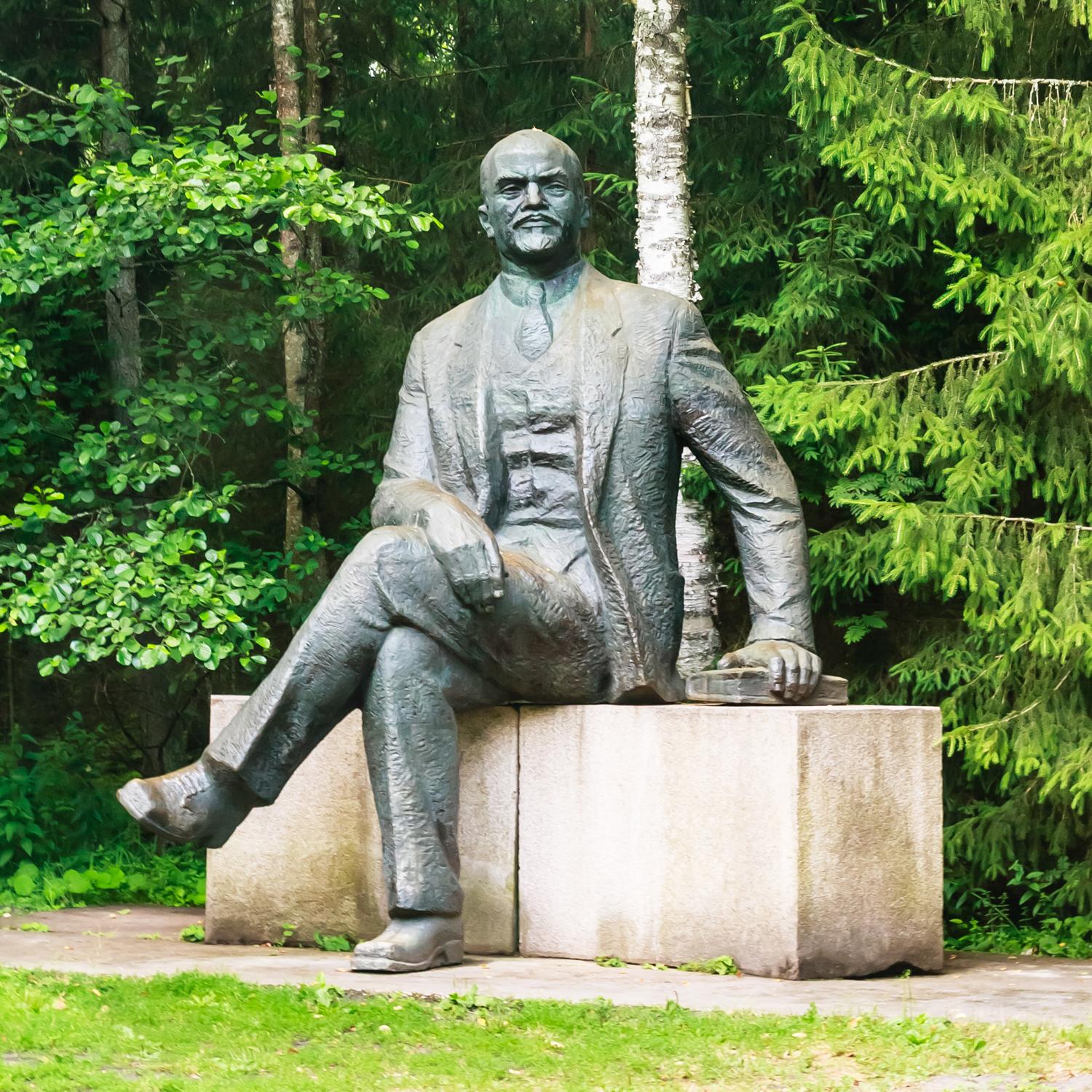 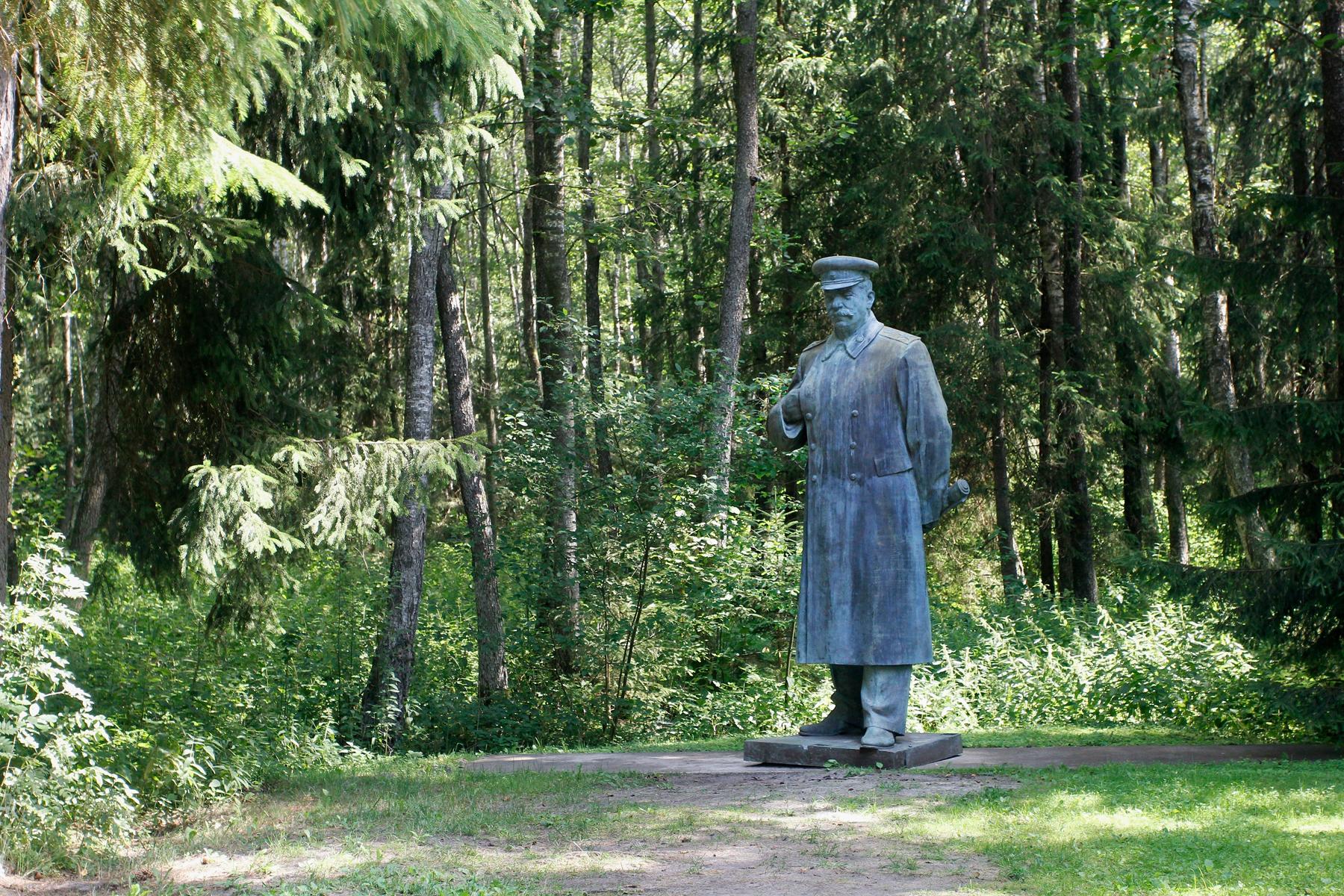 PHOTO: Rogit/Shutterstock
Previous Next
9 OF 14

If, for some strange reason, you love Stalin (or are simply fascinated with Soviet history, minus the adoration part), Lithuania’s Grutas Park, which also goes by the name “Stalin World,” just might be for you. After the occupying Red Army left Lithuania for good in 1993, the Lithuanian Government began tearing down Soviet-themed monuments (busts and statues of Lenin, Marx, Stalin, and others). But thanks to the efforts of Viliumas Malinauskas, the park’s founder who made his fortune selling mushrooms (not the magic kind), many of the controversial sculptures left behind ended up here. Tourists can now stroll through the park and get a small taste of Lithuania’s communist past, through the gift of Marxist sculpture. 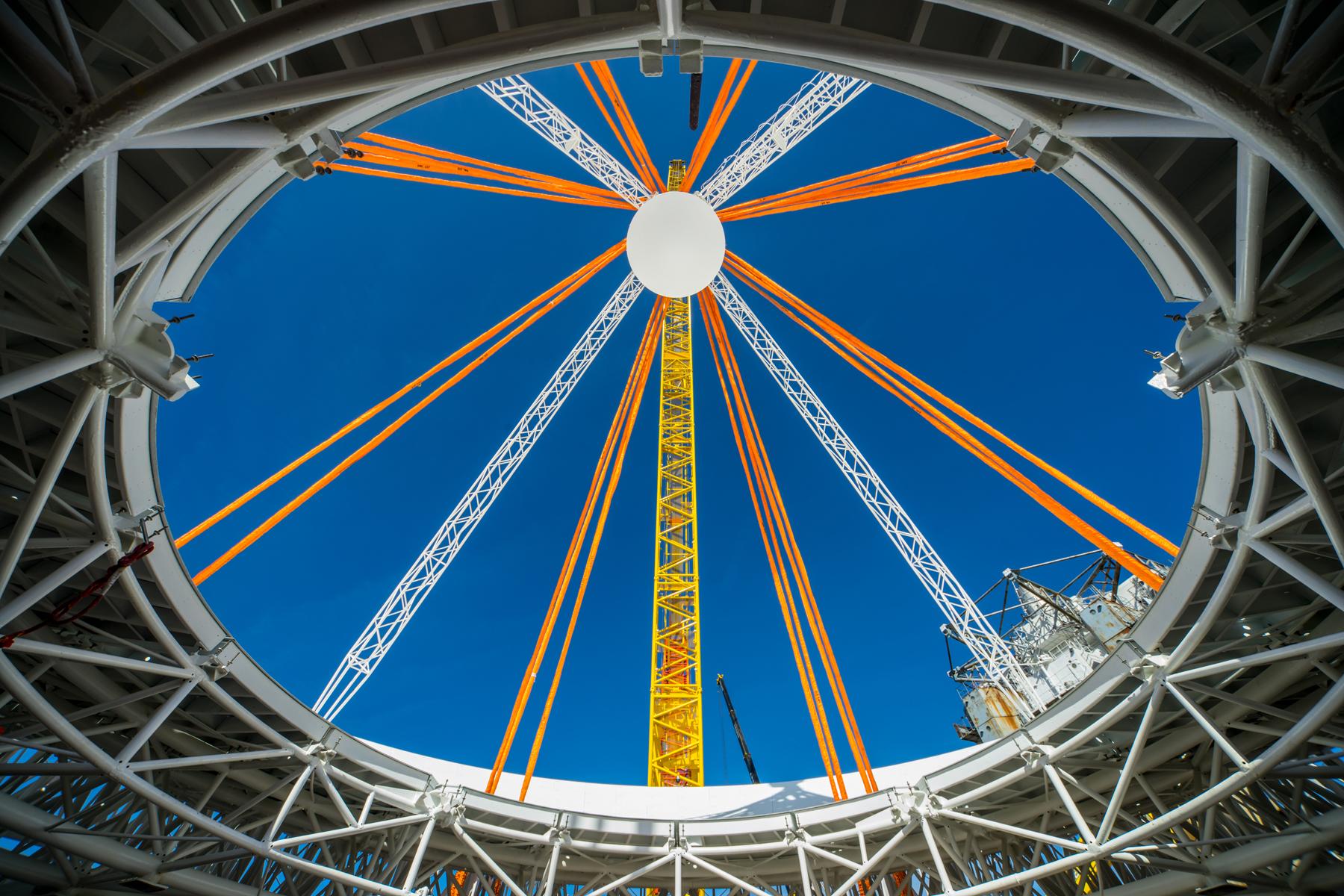 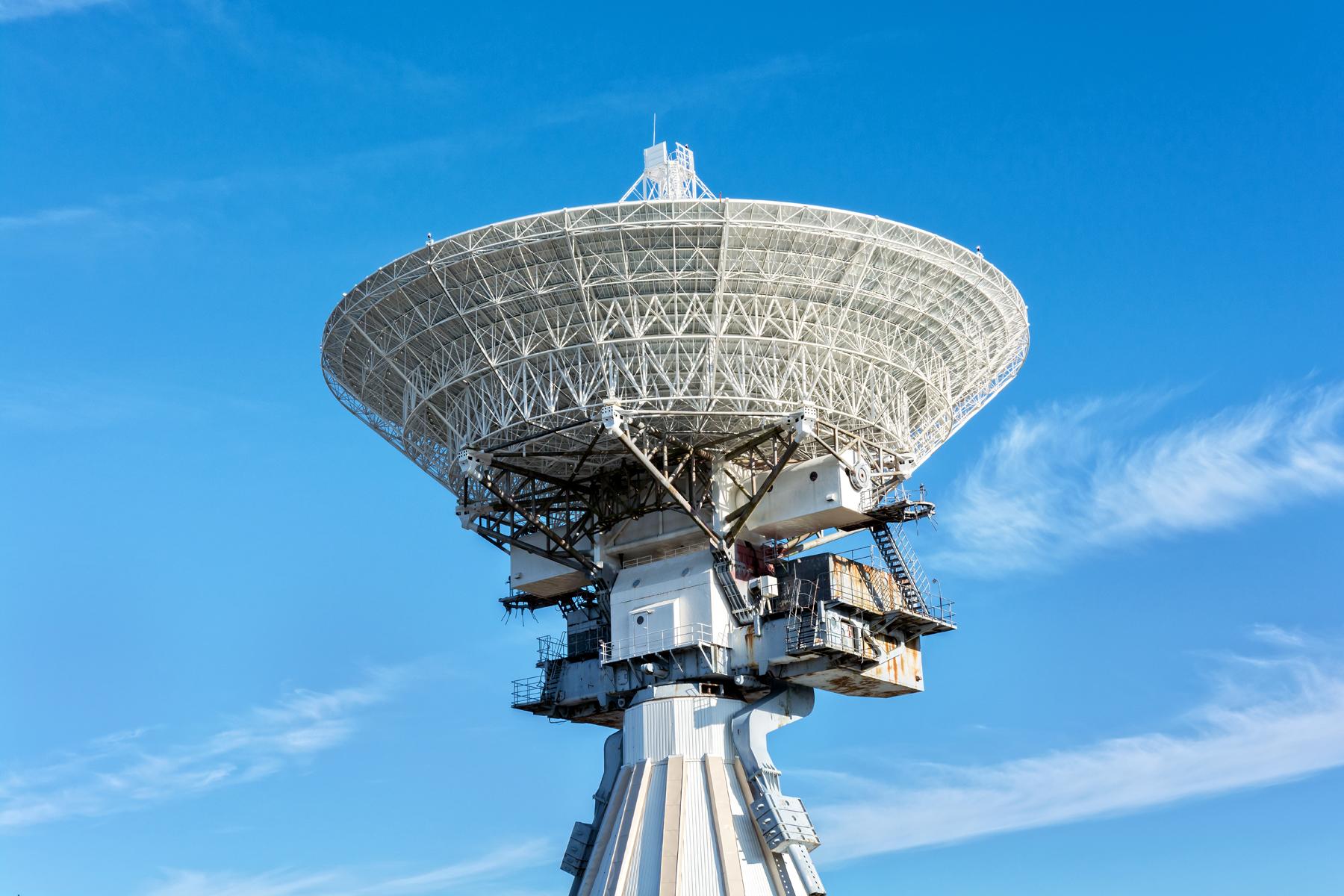 The former Soviet military town (now a ghost town) of Irbene, Latvia , and the Ventspils International Radio Astronomy Center, demonstrate that abandoned Soviet structures can be rebuilt. If you chance upon this remote spot, you’ll probably spy two massive radio telescopes (RT-32 and RT-16) nearby. When the Soviet Army left Latvia in 1994, they abandoned and even destroyed parts of these telescopes, which had once served as an integral part of Russia’s espionage game. Latvia’s Academy of Sciences quickly moved in and saved the day, repairing and repurposing the telescopes, eventually redirecting their targeting toward the heaven’s above, instead of intercepting NATO’s communications. 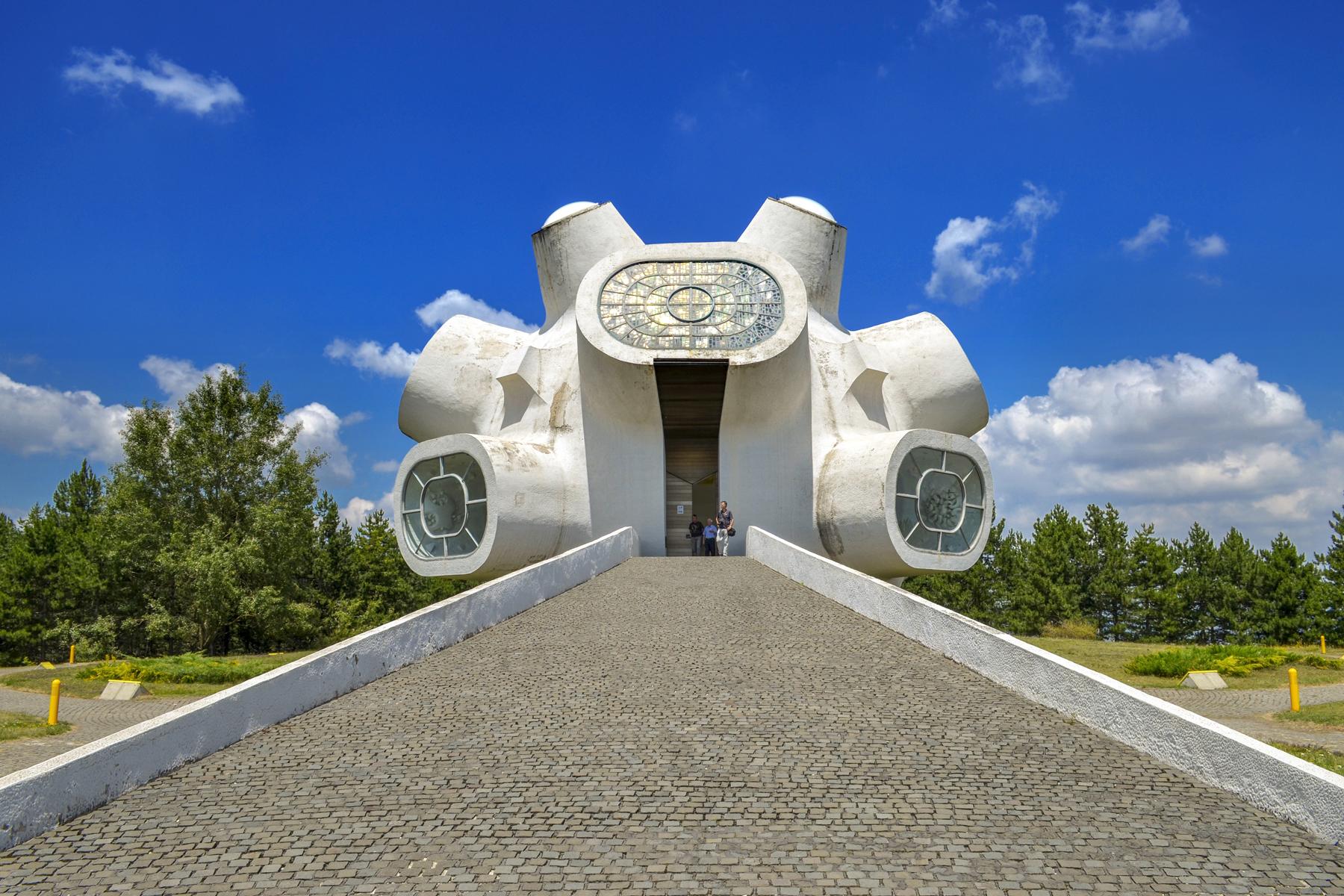 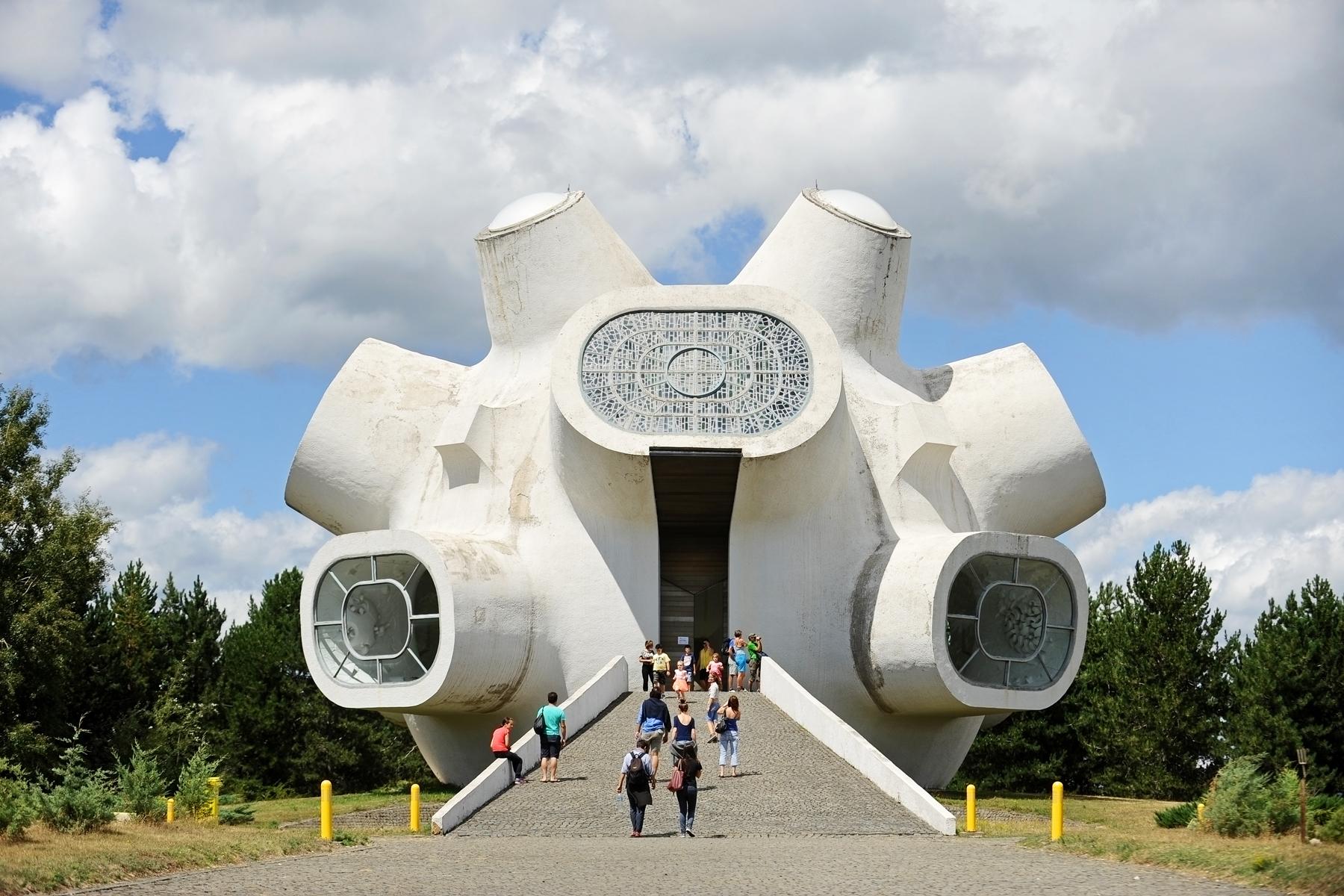 PHOTO: roibu / Shutterstock
Previous Next
11 OF 14

WHERE: Kruševo, Republic of Macedonia

If you’d like to wander about a gargantuan Macedonian monument that’s been kept in pristine condition, Macedonia’s Ilinden, or Makedonium Monument, located in the mountain village of Kruševo (Macedonia’s highest town), should satisfy your monumental exploring needs. The building, which looks like a futuristic golf ball, a gigantic artificial aorta, or maybe a bleached out sea sponge, commemorates the Ilinden Uprising of 1903, when the Internal Macedonian Revolutionary Organization (IMRO) rose up in an attempt to throw off Ottoman rule. While the bloody revolt ultimately didn’t succeed, it was a significant step toward greater independence for different states in the region, of which the Macedonian people are very proud. 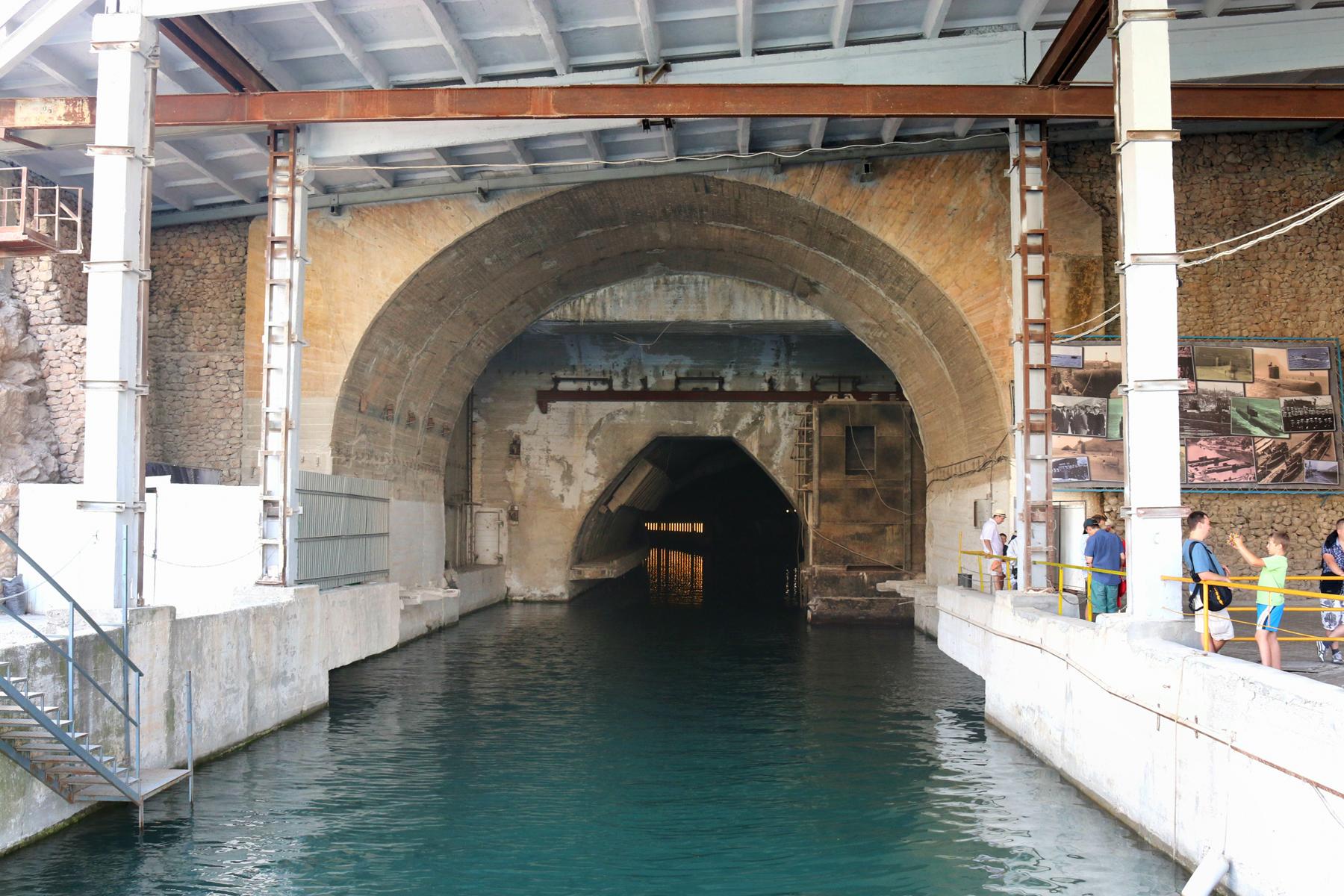 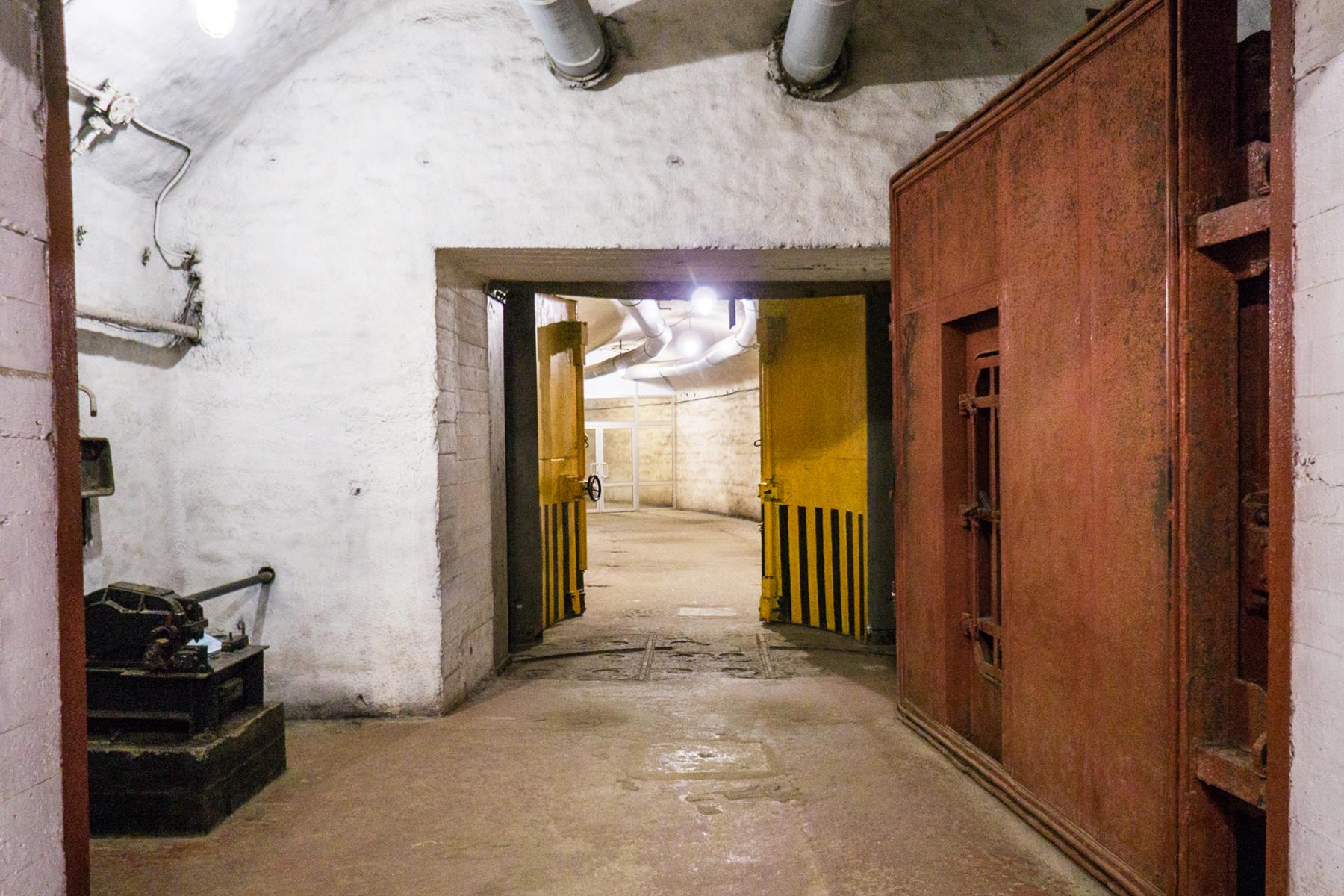 PHOTO: Nuclearlily | Dreamstime.com
Previous Next
12 OF 14

The subs have sailed on, but Crimea’s abandoned Soviet-era submarine base, located in the Balaklava district of Sevastopol, still remains. Urban explorers hoping to catch a glimpse of a James Bond-esque Cold War military facility will be in heaven here. This underground submarine base, built to withstand a nuclear blast, once housed a formidable fleet of Soviet submarines. When Crimea belonged to Ukraine (Russia controls the peninsula now), this clandestine base fell into a state of disrepair, and was even ransacked for raw materials—although as of this writing, the deserted base is open for tours for those who are curious about the inner workings of the former Soviet Navy. 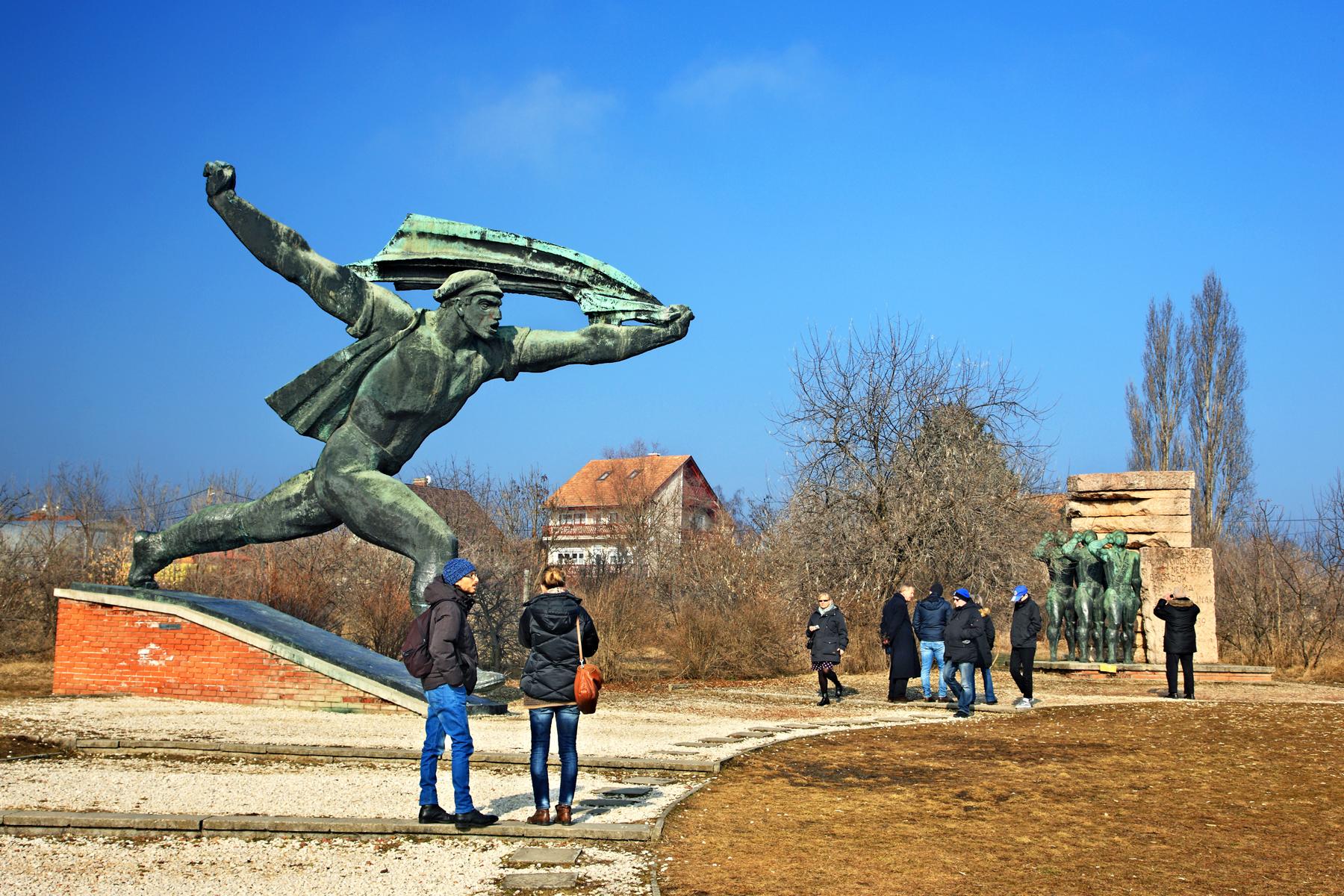 Memento Park is where many of Hungary’s once glorified communist-themed statues have found a home, after being forced into “retirement” once the governing philosophies of Marx, Lenin, Stalin, and Béla Kun (an important Hungarian communist leader) were cast aside. This open-air park was designed to highlight the contrasts between periods of dictatorship and democracy during Hungary’s often turbulent history. If you opt for a stroll through Memento Park, you’ll be surrounded by some of “the biggest statues of the Cold War,” as well as other memorabilia produced in Eastern Europe during the communist era, giving you an informative glimpse into the recent past. 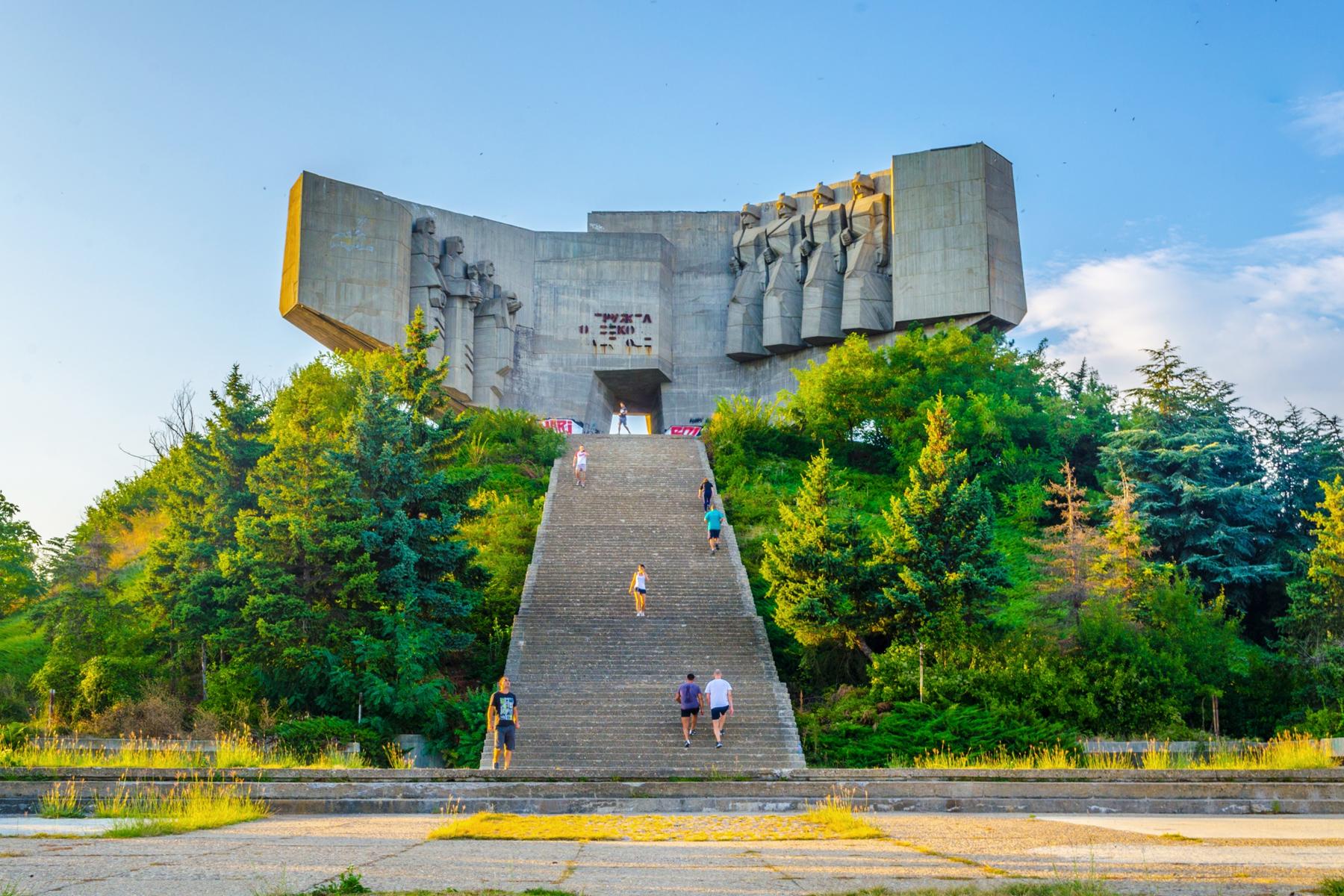 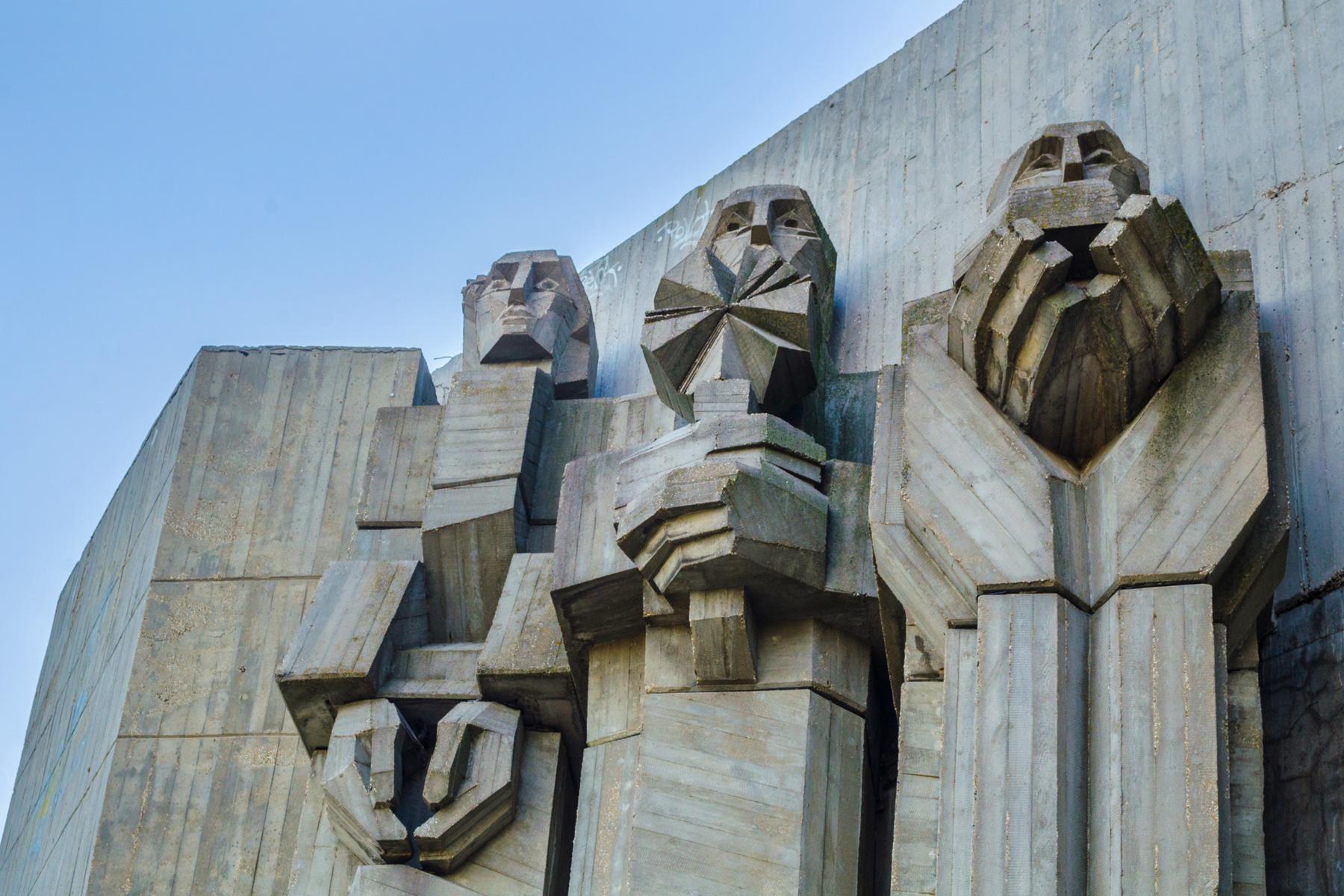 PHOTO: Trabantos/ Shutterstock
Previous Next
14 OF 14

Monument of the Bulgarian-Soviet Friendship

At last, a monument that celebrates friendship, rather than glorifying the brutality of armed human conflict. Just kidding. The Monument of the Bulgarian-Soviet Friendship, situated on Crane Hill in the city of Varna, was commissioned as a tribute to the Soviet Military—although the Soviet Army in this case was meant to symbolize the deep bonds between the people of Bulgaria and Russia. These days, this impressive structure, with its massive, angular cement reliefs of Soviet soldiers, is still quite a sight to behold, even though the overall upkeep leaves something to be desired.