Palm Springs and the Desert Resorts

My life’s work is done.

My history with Taco Bell began when I was a young child. The main thing my dad “cooked” was Taco Bell take-out for dinner as a special semi-weekly treat. This tradition continued through college (when my dad would occasionally drop off Taco Bell bean burritos to my dorm, where I would refrigerate them and eat them literally nightly) and, now, it has resurfaced in my professional life as an extremely serious investigative reporter (my dad has nothing to do with this one!).

You see, back in 2017, I reached out to Taco Bell, professionally (I emailed them), and asked if I could cover one of the Taco Bell-themed weddings at their chapel in Las Vegas. And they…let me. They let me? They let me! They let me attend the wedding of two people I did not know, who also allowed this–truly a miracle. It was from this moment on that I vowed to be involved, in some way, in All Of The Taco Bell Events.

That’s right, I’ve hit my peak, not only as an extremely serious journalist but as a Human Being and Earthling.

The Taco Bell pop-up hotel, “The Bell,” sold out in just two minutes back in June in collaboration with the V Hotel in Palm Springs. I, unfortunately, was not one of the lucky people to get reservations. However, in a bizarre twist of fate, Taco Bell found its way to me (as it always seems to) in that they emailed me and invited me to visit. That’s right, I’ve hit my peak, not only as an extremely serious journalist but as a Human Being and Earthling. 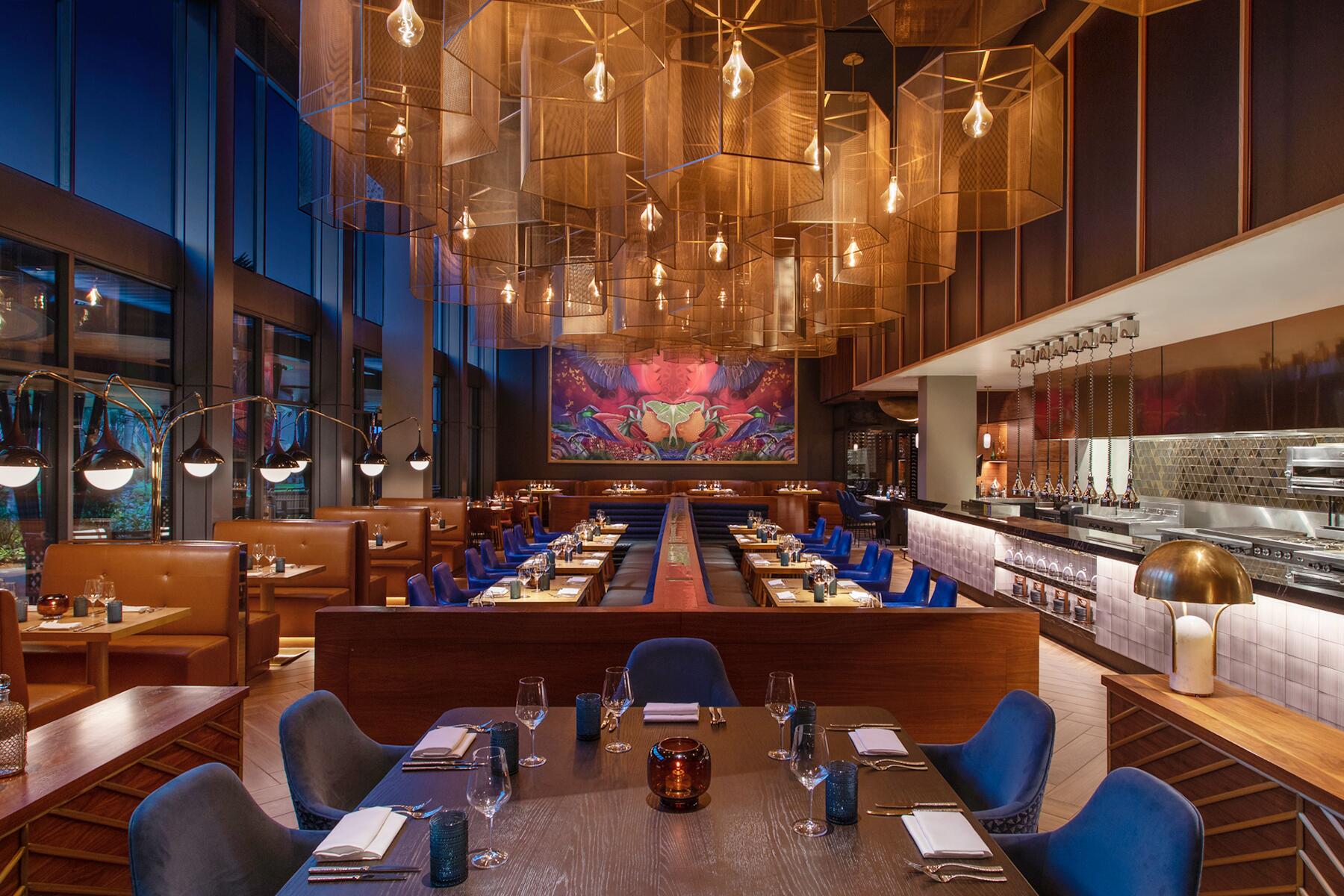 Please, join me on this journey–here is your inside look at The Bell: A Taco Bell Hotel & Resort.

I drove down Palm Canyon Road for quite some time after getting off of the I-10, anxiously looking around for any sign of the fabled Taco Bell hotel. My heart would skip a beat when I passed by, say, a KFC or a Jack-in-the-Box, because my brain wasn’t adding things up correctly and therefore combining all fast food concepts into one thing.

Finally, a beacon of light shown in the distance in the form of a gigantic square.

We had arrived at The Bell. Upon arrival, your car is valeted–that’s right, they valeted my semi-dirty Honda Civic, its backseat covered in clothing. Upon getting out of the car, I noticed a line of Taco Bell-themed bikes, and I knew that my car would be staying put in its prestigious, valeted spot during my stay. Where I was going, I didn’t need a car (because of the bikes, you see–that’s what I’m getting at).

At check-in, a bartender served me a can of sparkling water (I was told other guests got a “Baja Blast with a watermelon popsicle” but I don’t know what that means, and was perfectly happy with water). I was also gifted a “The Bell: A Taco Bell Hotel & Resort” tote bag with a hot sauce beach towel inside of it. The generosity was already overflowing at The Bell.

The lobby itself had its own little TB touches here and there: a bouquet of hot sauce packets; other things that said “Taco Bell.”

The keycards to the hotel rooms were in the likeliness of a hot sauce packet, as was a keycard to a room cryptically called “The Freeze Room,” which wound up being a very chilly room decorated as an ice den where the Taco Bell Baja Blast Freeze drink would be celebrating its birthday all weekend long (signs read “Happy Birthday!” and visitors received a free Freeze).

But let’s get this out of the way: Right off the bat, the first thing quite obvious to me was that the Taco Bell hotel did not meet my specific Taco Bell-themed requests as outlined in this article announcing the hotel’s existence, but I will let that slide because I suppose I was asking a BIT much regarding my demand that there be a monument onsite dedicated to the chalupa and also that all of the rooms be themed by menu item. I can admit when I am being a diva.

Walking into my hotel room, I was met by the biggest pile of bags of chips (all Taco Bell hot sauce flavors) I have ever seen in my life. This hotel was shoving hot sauce packets down my throat (not literally) and honestly, thank god. It’s something I never knew I needed. The rooms themselves were regular, nice hotel rooms–a standard room, but with Taco Bell decorations scattered about: a hot sauce pillow, Taco Bell wallpaper, and a framed painting of (you guessed it) hot sauce packets. The minibar was filled with free water and soda.

Here it is: My room. Audrey Farnsworth

The phone looked like this. There were Taco Bell bathing products.

Perhaps the best part of the rooms were the robes–a wonderfully light and ribbed robe labeled “The Bell Hotel: A Taco Bell Resort.” I could see it now: This was in this robe that I would lounge in later that night while eating bags of Taco Bell chips and watching Forensic Files like a true Taco Bell king of the desert. As we were in Palm Springs and the temperature outside was approximately Hell degrees Fahrenheit, it was a welcome feature that this wasn’t your typical thick, terry-clothed robe: It was waffle-y and airy, perfect for laying in the sweet, sweet air conditioning.

However, now was not the time to be in my room. No–now it was time to go down to the pool, the place where all of the action was going to be. It was time to descend to my destiny.

…But instead, I got distracted by the gift shop because I am always distracted by a gift shop. The Taco Shop was a delightful little area with Taco Bell items available for purchase, including these Taco Bell shorts I bought and later realized were swimming trunks and NOT lounge shorts–which is fine. They are lounge shorts now.

But enough of this frivolous spending! It was time to party–it was Fire Pool time (the pools were named by hot sauce flavor). Hot sauce beach towels lined the chaise loungers, a DJ played tunes that slapped, and at exactly 3 pm, an actual Taco Bell bell “gonged” from the speakers–and we were off to the races. Servers came out and distributed Baja Mango Mojito mocktails and a dish of strawberry glazed cinnamon sticks with whipped cream dipping sauce–which truly were lovely, but, personally, I came to this hotel hungry as Hell and expected to be shoving soft tacos into my mouth at an extremely rapid pace at this point.

I walked up to the bar and asked the bartender if I should order food or wait for them to bring food around. He told me that I should wait–the food will come. There was even a billboard, explicitly telling me exactly what would be coming… soon.

And so I waited. The pool area wasn’t too crowded and everyone was mostly just lounging politely about, sans a particularly rowdy group of supposed YouTube influencers sitting directly next to me–one of whom jumped wildly into the pool sending water all over me, my phone, and literally my entire general vicinity.

INSIDER TIPYou could usually tell who the influencers were by if they were wearing the very expensive “Fire!” swimsuit sold in the gift shop.

It happened: I needed Taco Bell and I needed it now. So I dove into that poolside menu. Since I was at a Taco Bell hotel, I obviously went ahead and ordered a crudités plate, like a true psychopath, however, here was my reasoning: I figured I needed to get my vegetables in as I was about to also eat a lot of OTHER Taco Bell foods, and if there’s a plate of vegetables available to me that are healthy-adjacent while still technically being Taco Bell, well, what can I say? I like the sound of that.

This plate was sincerely delightful. There were veggies and (bean) hummus, and “pita chips” that were clearly Taco Bell tortillas (a welcome and expected feat). Pretty soon, to my absolute glee, the servers brought around nacho cheese fries and four different types of dipping sauces, and I decided that I would eat those in their entirety immediately before getting in the pool (a decision I stand by).

Highlight #3: My Brief Moment With A Hot Sauce Floatie

It might not have lasted very long, but I had one moment with one of the famed hot sauce floaties, and it was at that moment that I realized I did not know how to climb onto a pool floatie with absolutely any grace whatsoever.

I give up. Julia Davidovich

As the afternoon turned into early evening, more snacks were purchased from the bar (as I just kept somehow missing the ones that were passed–I don’t know how or why), and it was nearly time to attend the nightly concert at the pool. As darkness fell over The Bell, everything got a heck of a lot more neon. It was then that I truly felt that I was at a Taco Bell (which are more recognizable to me at night, naturally).

Neon does NOT photograph well with an iPhone! Audrey Farnsworth

The hotel only served food until 9 pm–now, this was entirely transparent and written on every menu–no tricks here. However, this was a little odd as Taco Bell is famous for being everyone’s favorite “Fourth Meal” (a term they literally made up and use in most advertisements). And when I tried to order a snack at 9 pm exactly, I was told the kitchen was closed–which, fine. I missed the boat. But for real? Did I really have to go find food off-campus when I’m staying at a Taco Bell hotel? The answer is yes I did, and yes–I did.

The food served at The Bell itself was very good, but it certainly wasn’t the normal Taco Bell we know and love. It was a little more “upscale,” if you will. That is until breakfast.

At last, it felt like I was eating regular Taco Bell food. A tray of build-it-yourself breakfast tacos and a bowl of Pancake Delights were delivered to my room at precisely 10 am. These tacos did not mess around–they were Taco Bell, through and through, and gave me the satisfying feeling one has after eating a Taco Bell meal (glad and extremely full, like you might not be able to eat again for, perhaps, eight or ten hours).

We checked out at 11 am on Friday morning as the hotel was preparing for the rest of an event-packed weekend, where there would be performances by a synchronized swimming team in hot sauce costumes, a silent disco, and other things I didn’t see but heard were good. Regardless, one night at The Bell was good enough for me, and I left with a full heart and an uncomfortably full stomach.