Yvonne and Eric were to be wed here on this warm Saturday evening on the Las Vegas strip… inside of the Taco Bell, because that is a thing you can do here now. I was here to write a story about love and tacos.

Here’s the tea on Taco Bell weddings: For starters, they are in high demand–so much so that they’re booked in advance through October 2018. They are organized and officiated by Flora Pop, the first traveling pop-up wedding company in the US. Victoria Hogan, the founder of Flora Pop (and the officiant of the weddings), spoke about her experiences at the Vegas Taco Bell. The types of people who order a Taco Bell wedding are typically “die-hard” TB fans or people who are already married and renewing their vows. Often, since the weddings are so cheap ($600 for the whole thing), the bridal party is able to spend more money on super chic clothes (Yvonne did–and she looked absolutely stunning), transport, or post-ceremony partying. The whole thing takes about 30 minutes and there’s room for about 15 guests.

Allow me to set the scene. 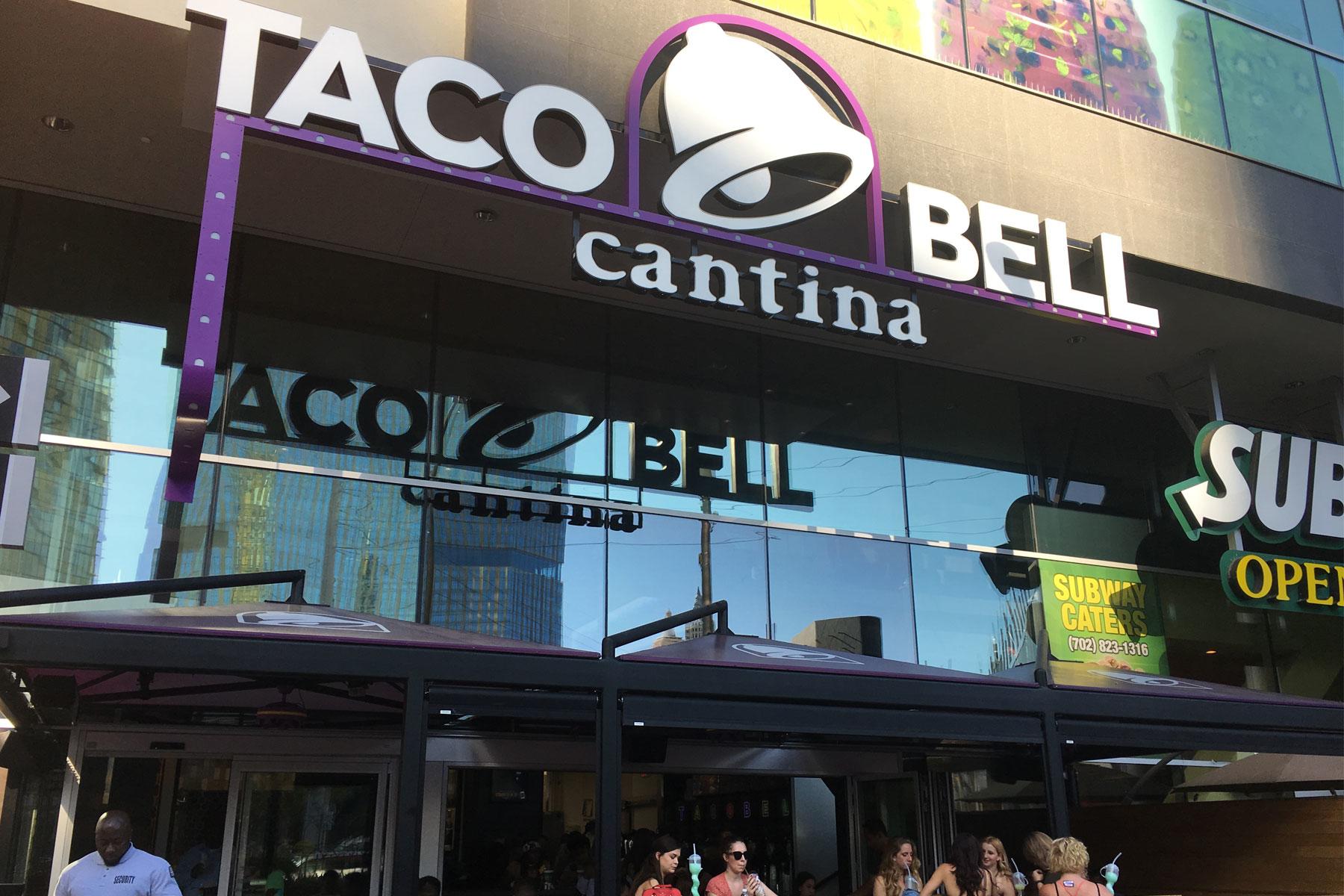 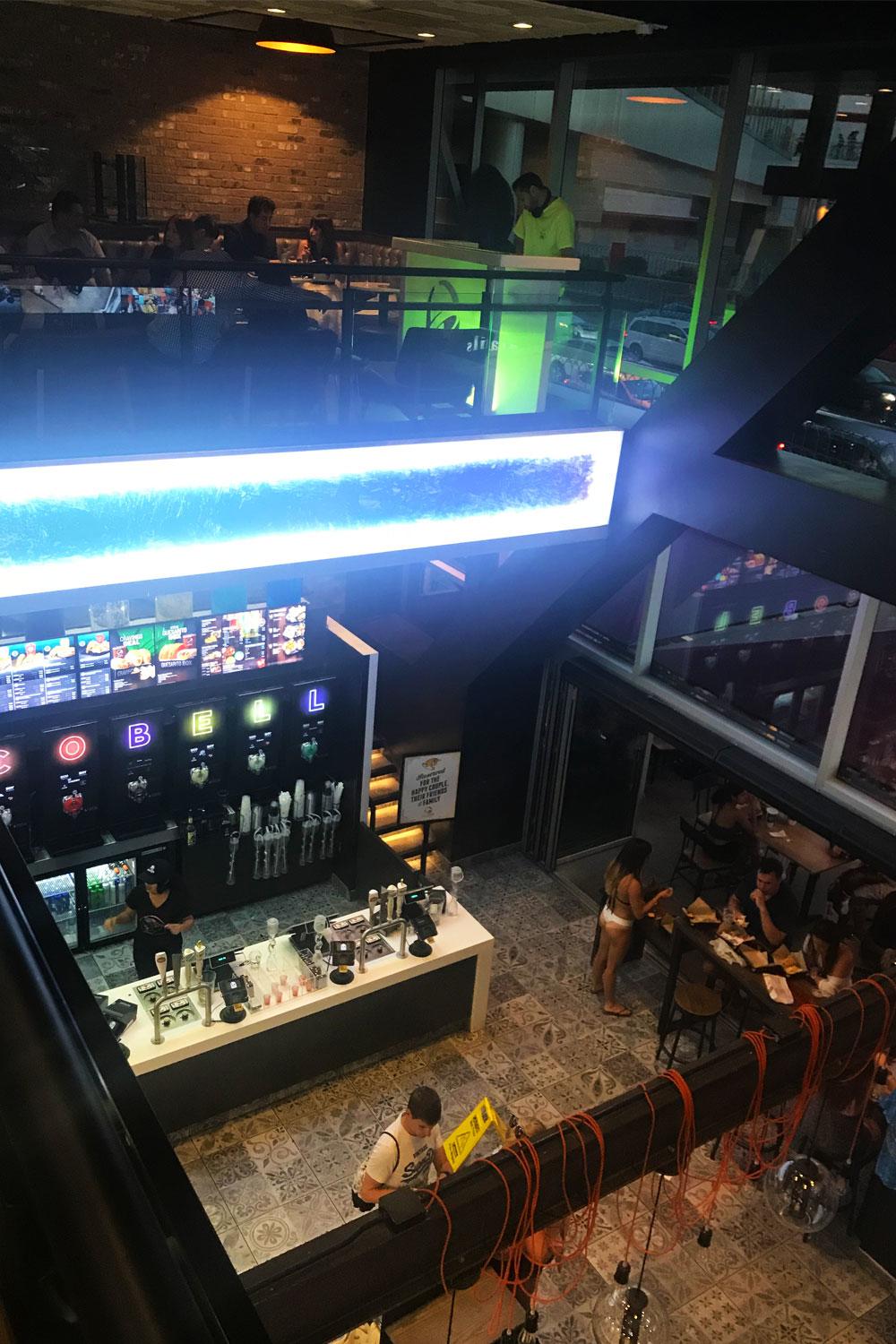 The downstairs is a place to order and a place to stand in your bathing suit while eating Taco Bell food. Regular Taco Bell stuff. 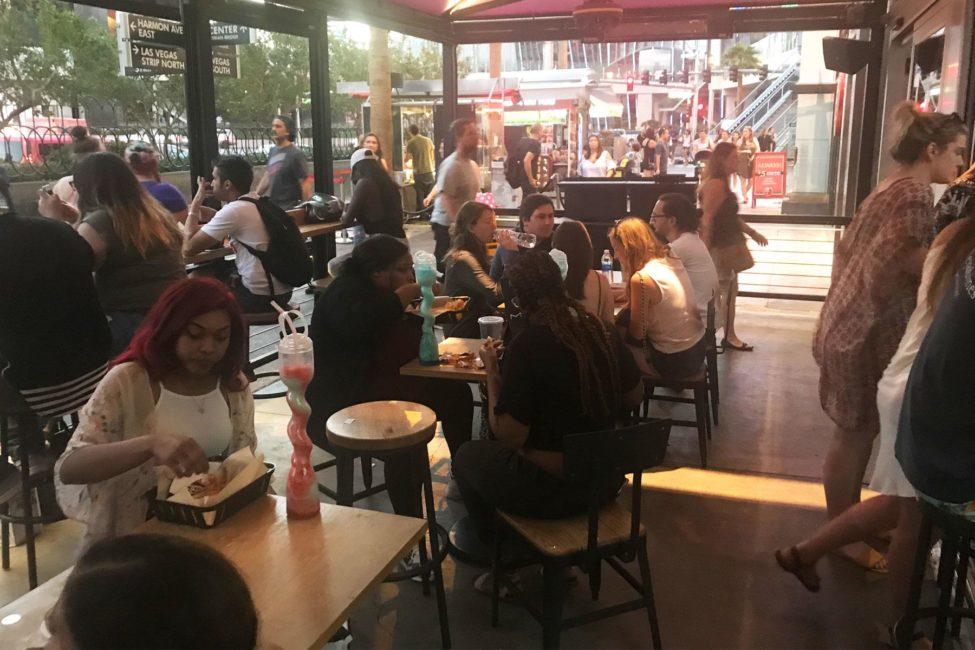 Also downstairs is the patio, where you can be at Taco Bell while also watching Vegas. None of these people knew a wedding was about to take place! (Because why would anyone think that! It’s a Taco Bell!) Well, they are about to be surprised!

INSIDER TIPLower your expectations for everything.

And upstairs, there’s the chapel.

It’s… okay, it’s mostly just a sign–a Taco Bell logo that kind of looks like wedding bells (Taco BELL, wedding BELLS), on the top floor of a Taco Bell. I wasn’t expecting the Taco Bell wedding chapel to look like this. [Editor’s note: What exactly were you expecting, Audrey?] This “chapel,” on a regular, non-wedding day is just an upstairs seating area. Little did I know it was about to be transformed–and very quickly because apparently, the staff had forgotten that there was a 6 p.m. wedding taking place. The wedding party had not arrived yet, so it was fine.They set it all up quickly, and with ease. Two sets of chairs with an aisle for the bride and groom to walk and stand before the Taco/wedding Bells logo. 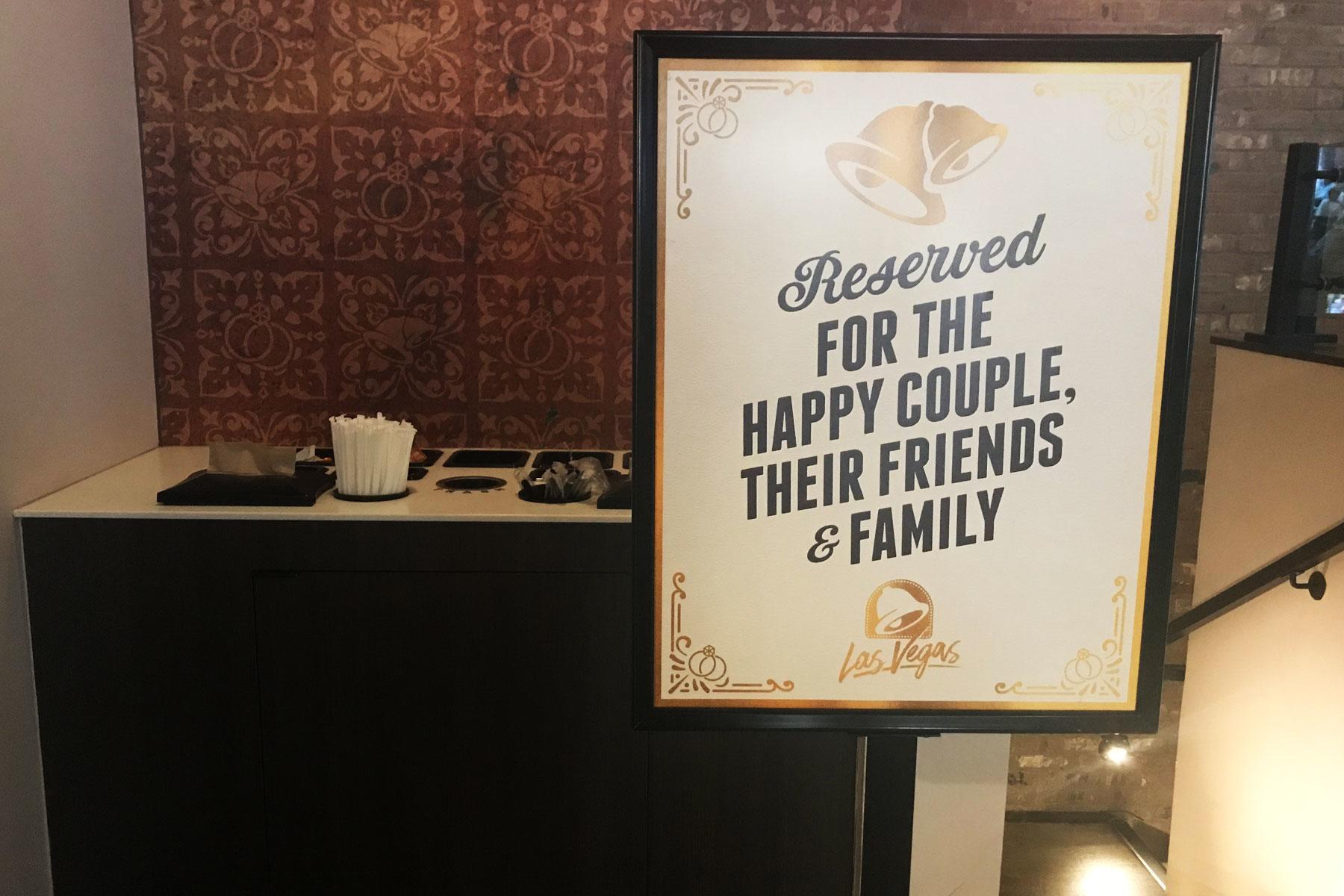 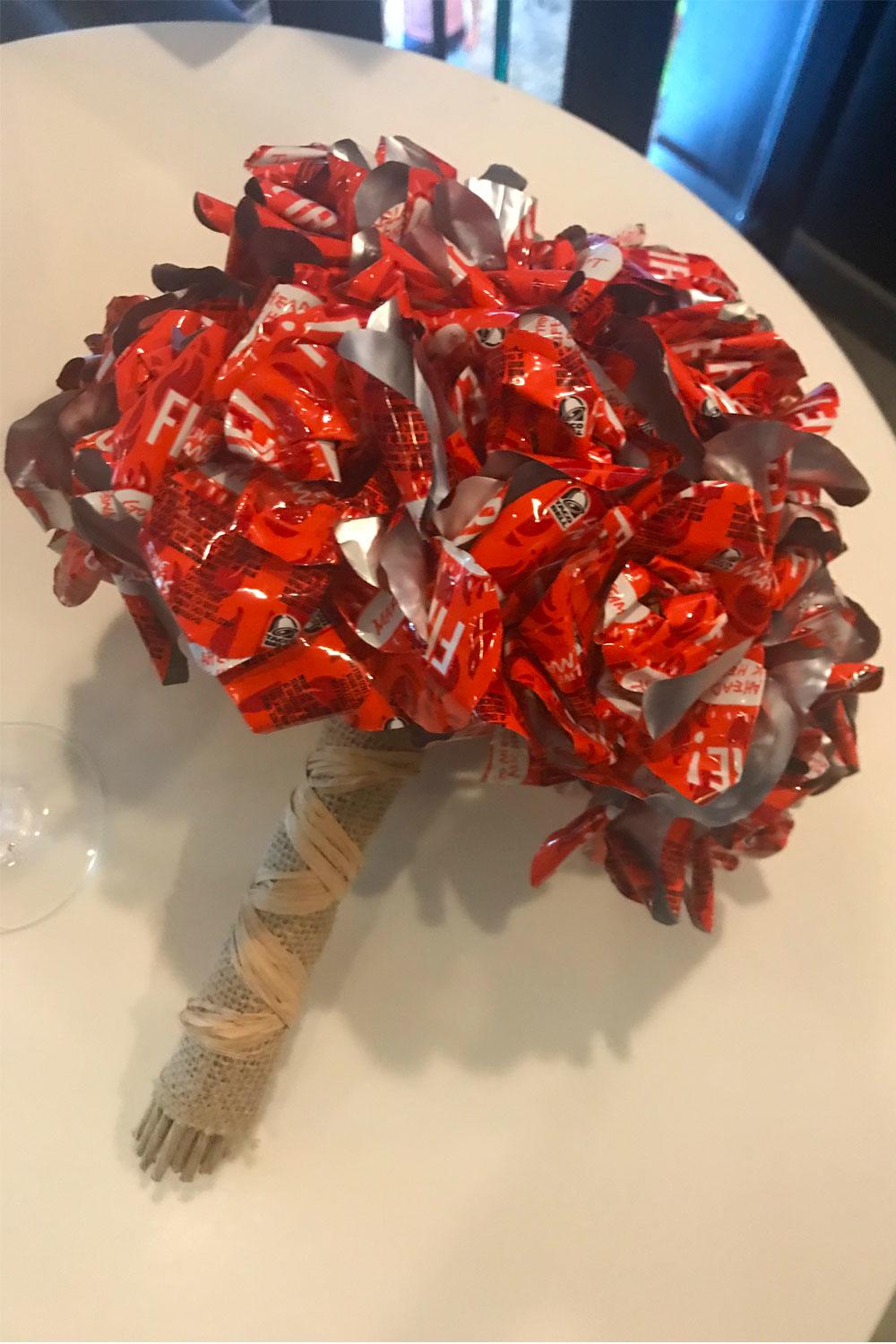 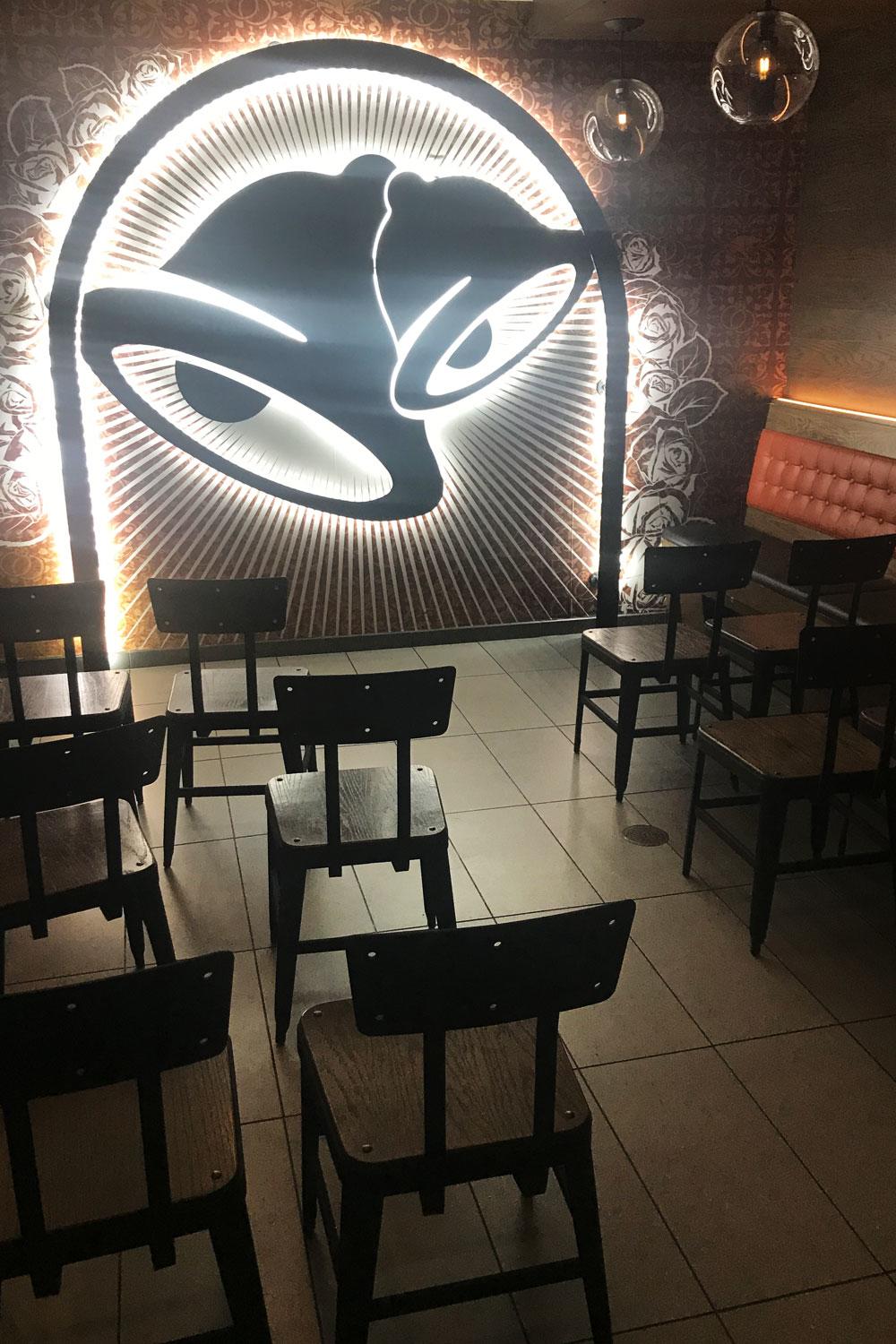 The bouquet was provided by Taco Bell. It was not flowers. It was hot sauce packets.

As guests waited for the wedding to begin, they were able to watch a large television screen with a variety of shows, sports, and a live feed where the wedding was being shown to guests on the first floor.

The DJ who resides upstairs played “Always There When U Call” by Ja Rule as the wedding party walked up the stairs, arrived and took their positions. It was time for wedding inside of a Taco Bell, and I was glad as hell to be the strange woman no one invited or knew sitting in the corner, who asked to come in there and quietly participate, and they let me for some reason. 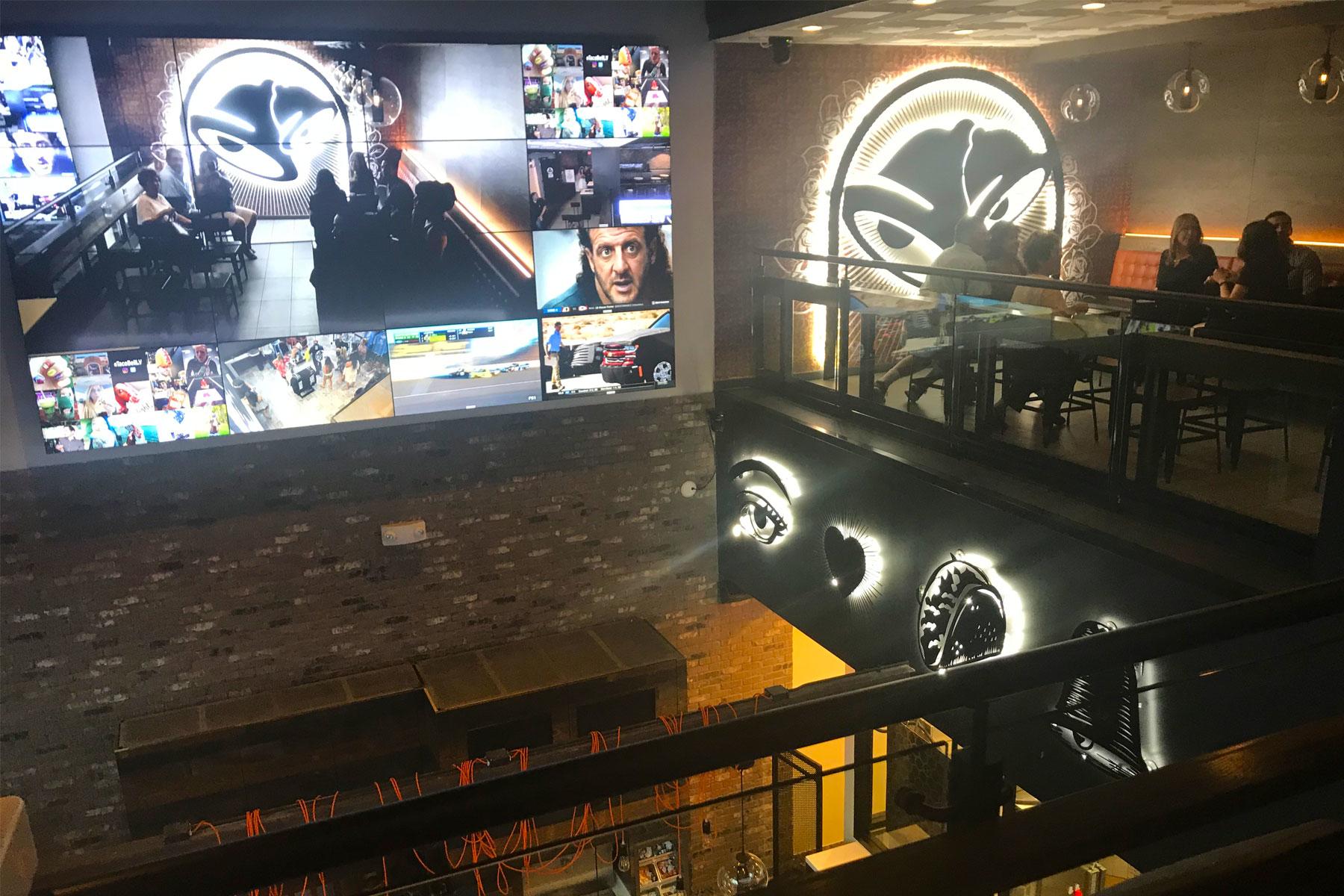 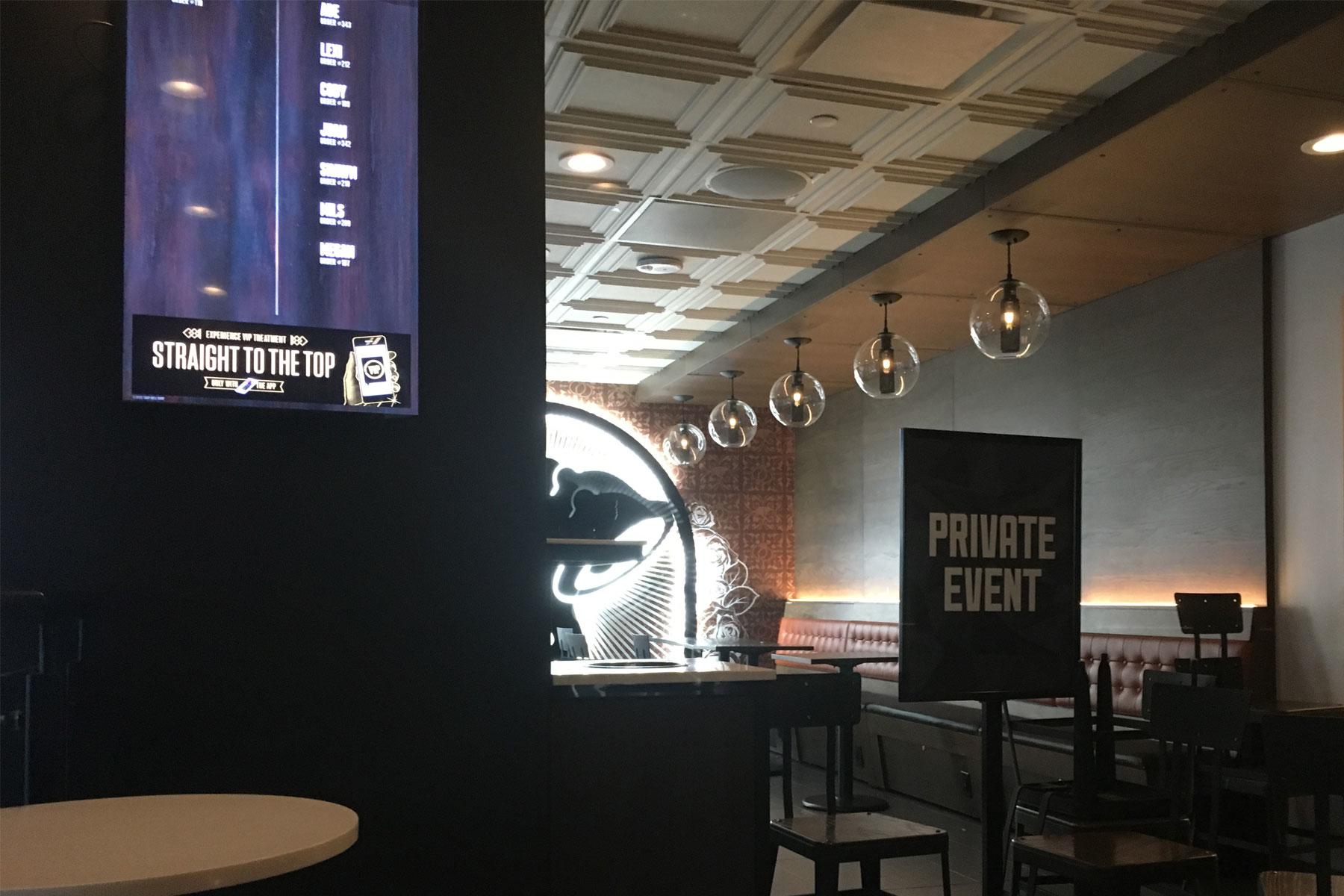 INSIDER TIPRight by where you can get married, you can also check if your order is ready downstairs–it is conveniently right here on this screen.

The bride got into position, her dad ready to walk her down the “aisle.” Everyone became quiet. It was marriage time, baby. The DJ didn’t realize this, though, as he accidentally started playing, “This Is How We Do It” by Montell Jordan and the wedding coordinator had to ask him to stop. He apologized, and the wedding began.

“On behalf of true love and tacos, and true love for tacos, we’re honored to celebrate with you today,” the wedding officiant began. “True love is about finding someone who knows you better than yourself; someone who cherishes your imperfections. It’s remembering to get them two fire sauce packets for every one taco.” 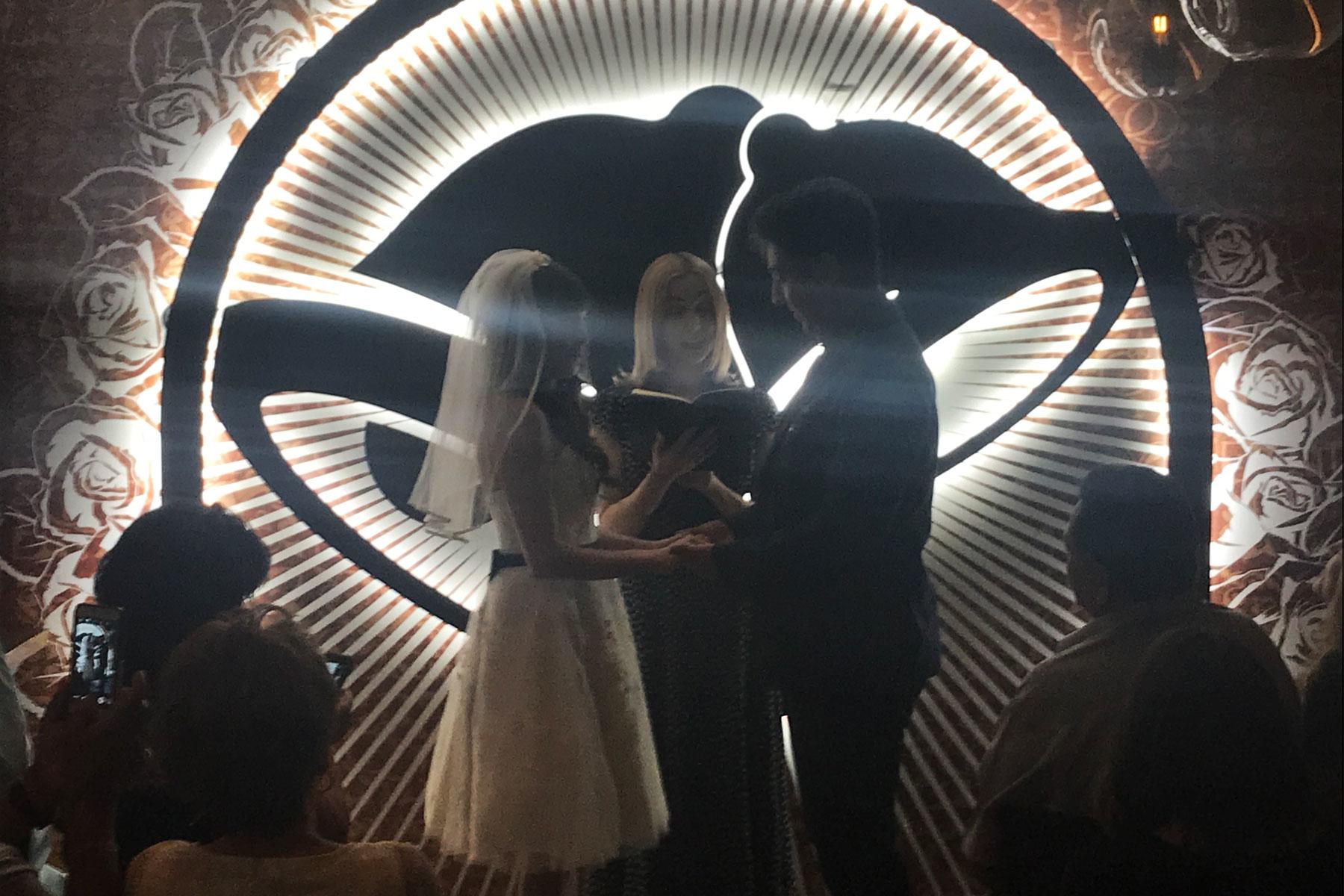 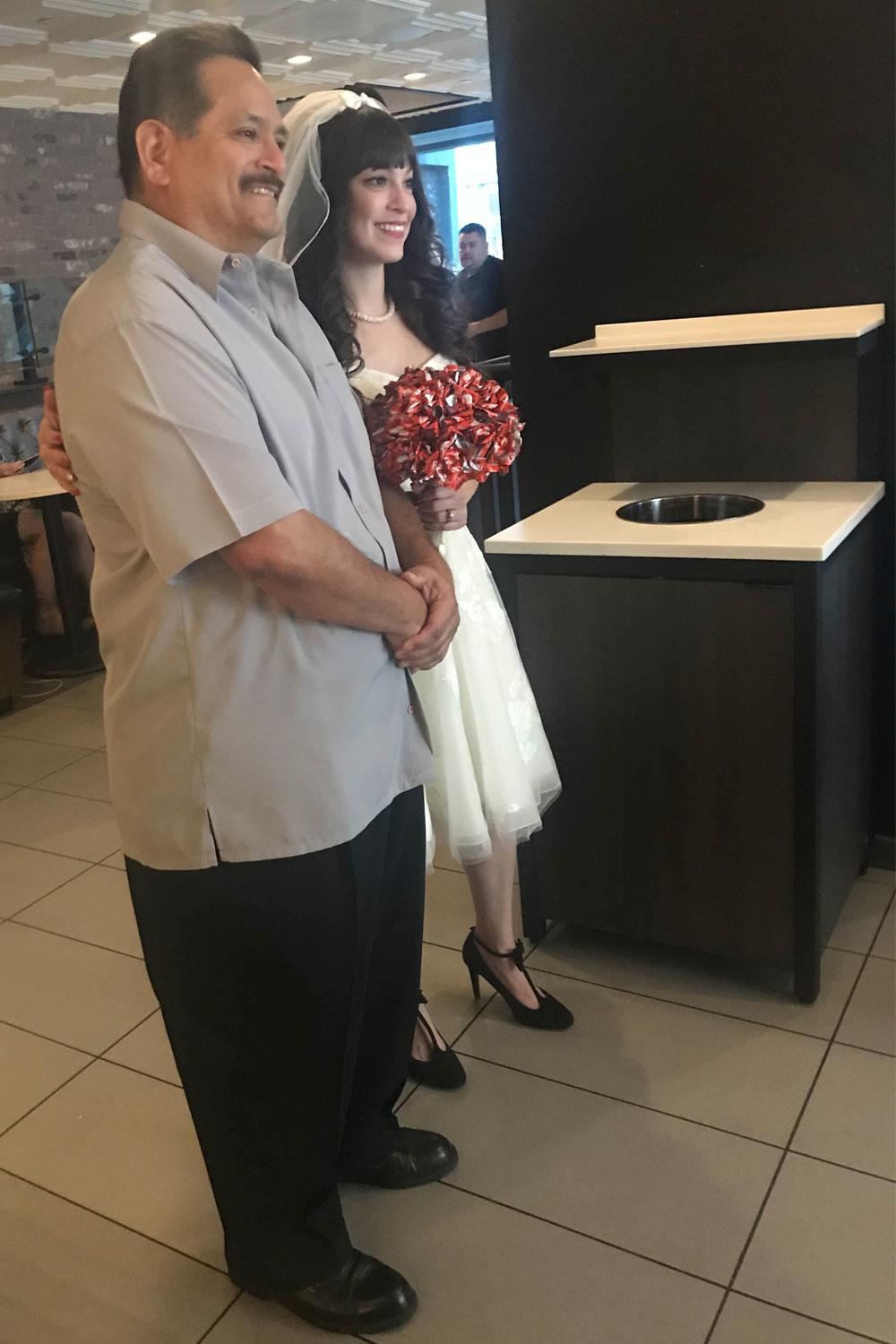 INSIDER TIPFire sauce packets are not recommended for those who are not in love.

The ceremony itself only lasts about two minutes. In Yvonne and Eric’s case, it was very sweet, and there were many Taco Bell puns–many more than would be thrown about in a regular wedding, and the vows included something about a crunchwrap and nacho cheese. It was beautiful. It didn’t make me want to get married, but it did make me want a crunchwrap.

When the ceremony ended, the DJ started playing tunes again (Beyonce’s “Crazy In Love”). Everyone cheered, got up, and moved about 10 feet to the left to the cake eating area. The DJ was now using strobe lights in his set, so it was flashing green everywhere.

The reception was lively and full of more Taco Bell surprises. The cake was not regular cake. It was: this. 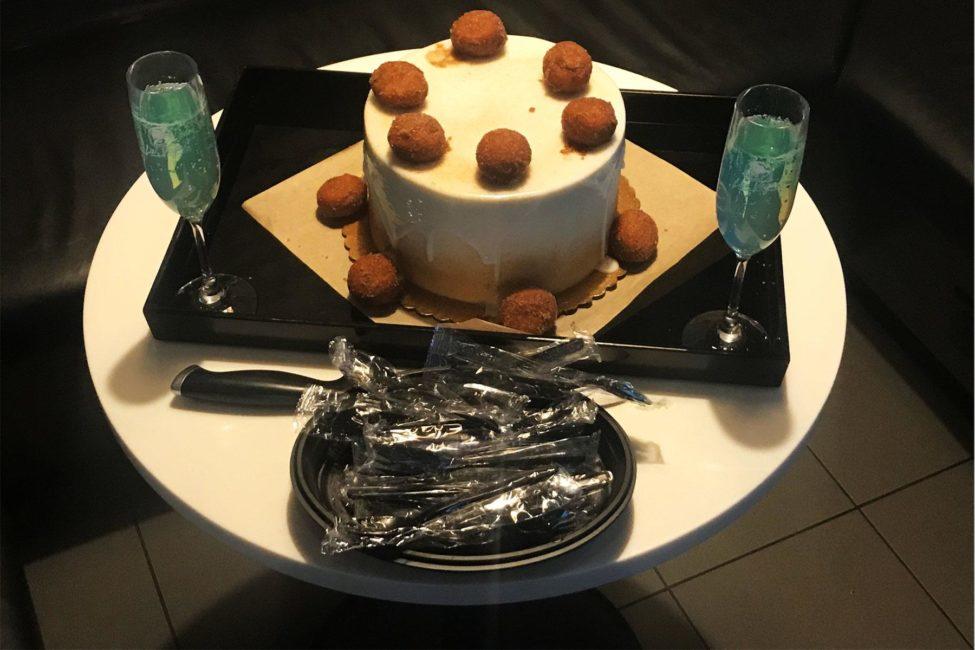 That is a “Cinnabon Cake.” It is made of… whatever Cinnabons are made of (cinnamon buns? Probably?), as well as little “Cinnabon Delights,” a Taco Bell menu item (breakfast menu item, mind you) that is made of little pastry spheres filled with icing. When I asked the bride how it was, she told me that it was amazing–“Unlike anything we had ever tasted.” The catering was Taco Bell.

You can choose to pass out your tacos to your guests, or you can say to them, “Buy your own tacos, we are eating this because we are married now.” This wonderful couple shared their tacos with their guests. 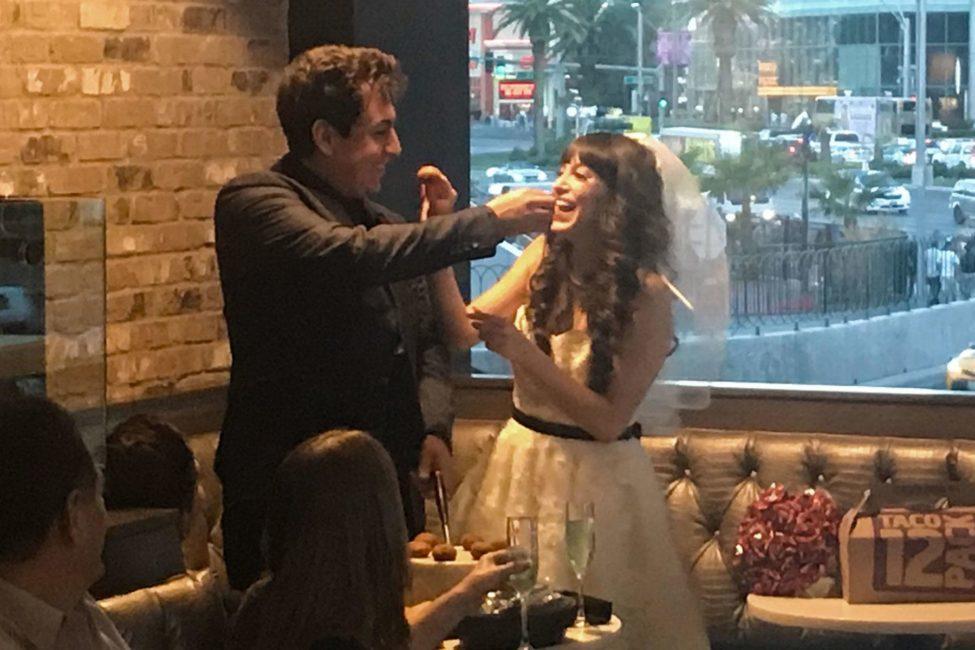 Yvonne and Eric were given their 12-pack of crunchy tacos and two champagne flutes of “Mountain Dew Baja Blast” (a popular Taco Bell beverage).The couple posed with their champagne flutes, began cutting their Cinnabon cake–which all guests got a slice of. Then, everybody just sat around eating Taco Bell wedding cake and chilling the hell out to the pop hits. It was dusk, and Flo Rida was playing.

INSIDER TIPIf it is dusk, and Flo Rida is playing, this is a sign that you are about to have a nice evening.

Perhaps the funniest thing about a wedding at Taco Bell is that within a few minutes of the actual ceremony being over, everyone settled down and it kind of just looked like a regular night at Taco Bell–except everyone was extremely well-dressed and there was a bride in a wedding dress. 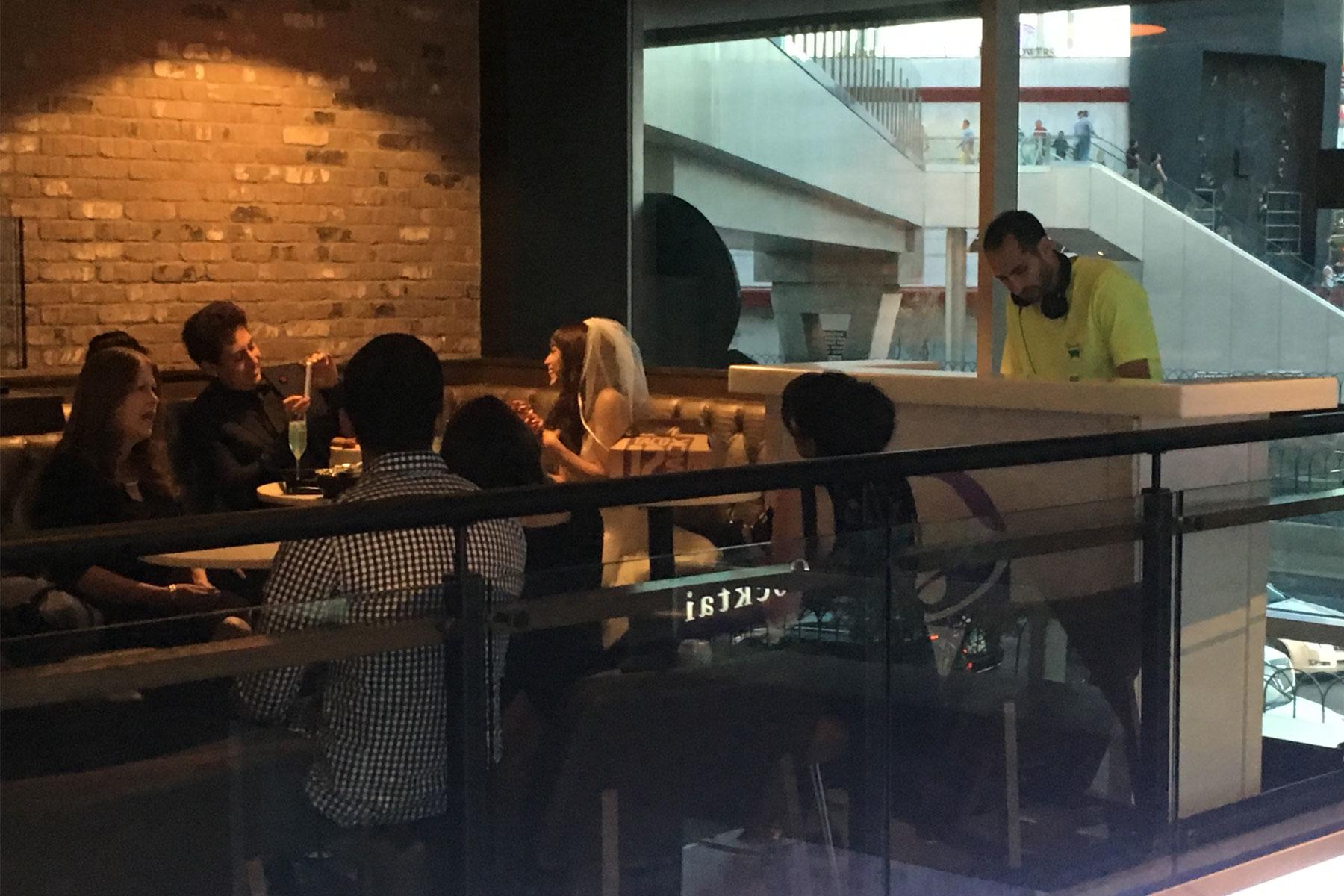 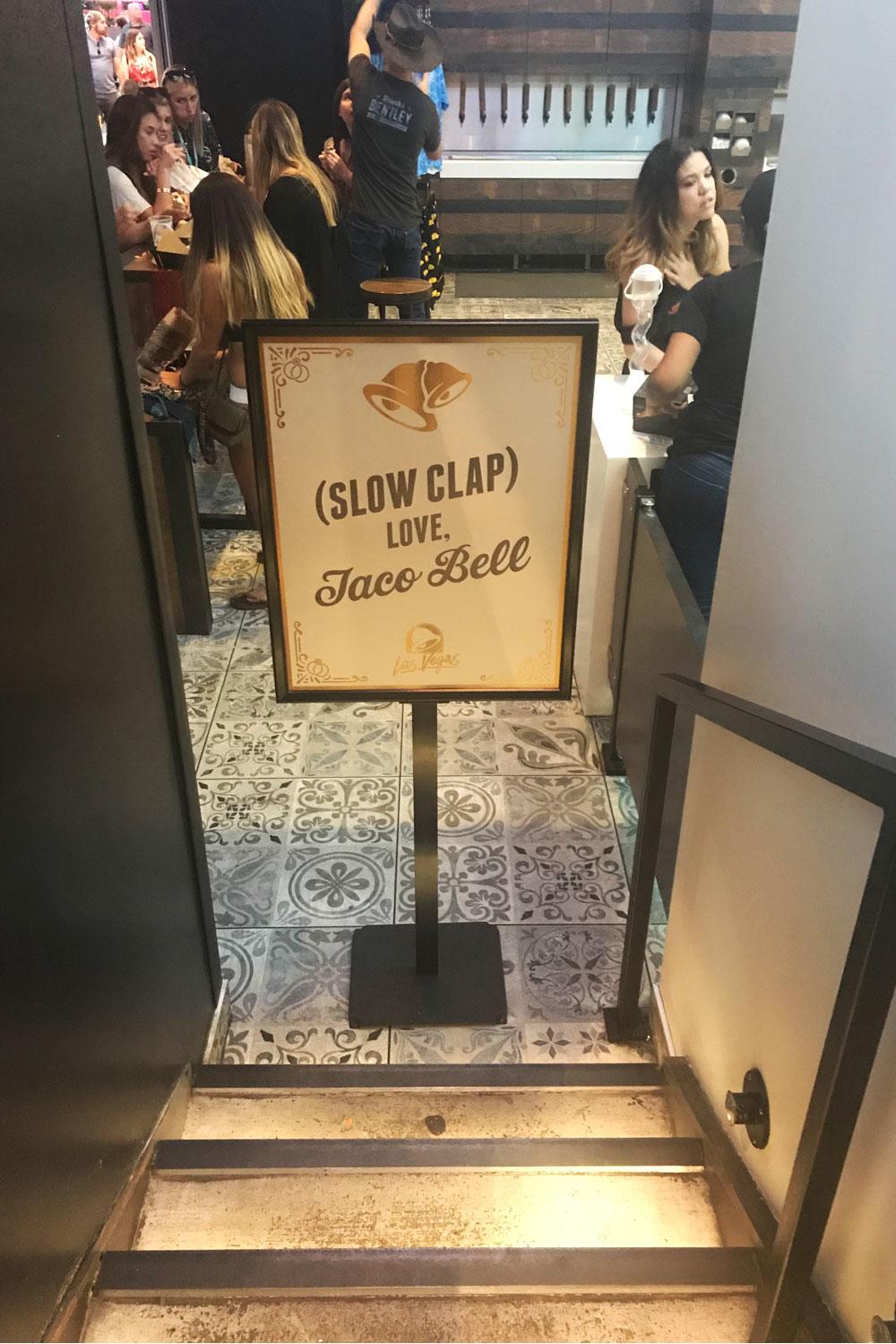 And then it was back to reality. A reality of people not being married inside of a Taco Bell. A reality of just… being at someone else’s wedding at a Taco Bell in Las Vegas. That was my new reality. And I needed to get out of there before I started creeping out all of these nice people who had no idea who I was or why I was there and yet kindly offered me a taco and a slice of cake. That is the magic of a Taco Bell wedding.