Admire some of Mérida’s most beautiful buildings, but don’t forget about their dark past.

Colonized and rebranded in 1542 by a Spanish father-son duo, the so-called White City—formerly known to the indigenous Mayan peoples as T’Hó or ‘Five Hills’—became Mérida. Now the largest city on the Yucatán Peninsula, Mérida’s aesthetically pleasing colonial-era architecture remains one of the region’s biggest draws, although these admittedly exquisite facades often conceal a less-than-pretty past. However, for travelers looking to learn about the area’s complex history while admiring some of its most beautiful buildings, here are the 10 colonial gems worth visiting in Mérida. 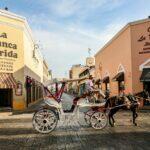 In Mérida, as in many other colonial cities, the length and breadth of Mexico—including Mexico City—stones from indigenous temples were often pilfered and repurposed to construct colonial-era edifices. One of Mérida’s most striking examples of this practice is the Catedral de San Ildefonso. Supposedly the oldest church in the Americas, the San Ildefonso Cathedral was built using stones from a Maya temple over the second half of the 16th century. While imposing from the outside, the interior of the cathedral is surprisingly understated, although it is famously home to a vast Unity of Christ crucifix and a “Christ of the Blisters” statue, one of Mérida’s most important religious artifacts.

Built in a baroque colonial style at the end of the 17th century, the Templo de Jesús de la Tercera Orden is a former Jesuit enclave often considered second only in beauty and importance to the Mérida Cathedral. While the façade is notable for the small but well-preserved stained-glass window, the interior is a riot of delicate religious artistry. Pay special attention to the semicircular cupola.

Constructed almost immediately after Francisco de Montejo colonized the city alongside his father, La Casa de Montejo retains its original 16th century, stone-carved façade to this day. However, much of the exterior and interior was altered to reflect shifting styles and sensibilities—including Gothic and Baroque influence—over the centuries. Now a free-to-enter museum and bank building, the coral-colored Casa de Montejo mansion house is lavishly outfitted with restored Victorian (and other late-19th and early-20th century) furniture and sometimes houses temporary art exhibits.

One of the most significant legacies of the colonial period in Mexico was the development of haciendas and nowadays, not unlike plantations in the American South, many of these haciendas have been converted into tourist attractions. Hacienda Yaxcopoil, situated in Umán, Mérida, is one such example where visitors can explore the grounds, museum, and one-time house while learning about the post-colonial henequen production period and admiring the pre-colonial Mayan pyramids which surround the site.

The colonial town of Izamal serves as a yellow-hued counterpoint to the White City of Mérida. There, just an hour outside of Mérida, yellow colonial buildings, Mayan pyramids, and contemporary influence mingle harmoniously; however, the San Antonio de Padua Convent is perhaps the most striking example of colonial architecture and is another instance of a Mayan temple being leveled to make way for a symbol of Spanish dominance. The convent, which is painted in Izamal’s trademark sunflower yellow tones, also comes complete with a small museum and one of the world’s largest open-air atriums.

In the neighborhood of the same name—barrio San Juan—the Arco de San Juan stands tall over a street which once led to Campeche. Constructed in 1790, toward the tail-end of the colonial period in Mexico, the San Juan Arch is the largest and perhaps the most elaborate (by a whisker) of Mérida’s three colonial arches still in existence. Curious visitors can admire the other two, Arco del Puente and Arco de Dragones, just one block apart from each other in La Mejorada neighborhood.

The MACAY museum (or the Museo Fernando García Ponce, to give it its full title) is one of the top attractions in Mérida and the only dedicated contemporary art museum on the peninsula. However, before heading inside to admire the artwork, fans of colonial architecture should take some time to appreciate the impressive edifice. Known as the Ateneo Peninsular, the building was originally developed in the 16th century; however, it underwent a facelift of sorts in the early 20th century, giving the building its present-day neo-Renaissance French look. 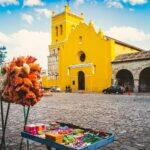 Yucatán’s Autonomous University has several campus buildings scattered across Mérida, although the most notable one—especially for fans of colonial architecture—is surely the so-called Central Building. Built under the orders of King Philip III of Spain in 1611 and inaugurated in 1618, the central courtyard of this vast white building—whose balcony arches are somewhat reminiscent of Spanish Moorish architecture—is now home to Friday night dance recitals courtesy of the university’s Ballet Folklorico. However, the most recognizable characteristic of the UADY Central Building is the recessed corner entranceway.

Visitors interested in Mérida’s tumultuous past should take a hot minute to stop by Santiago, one of the oldest—if not the oldest—neighborhood in the city. As the first place colonized by the Spaniards, it quickly became a convenient spot in which to congregate the region’s indigenous population, whom the Europeans, in turn, exploited as a source of free labor. Santiago’s bright white, 17th century Iglesia de Santiago— recognizable thanks to an elaborate pediment and sinuous cornice-work—was also the site of the city’s first mass.

INSIDER TIPIf you want to take a tour of Mérida’s other colonial-era churches—there are plenty to keep you going—be sure to add the Iglesias San Juan, Santa Ana, and San Sebastián to your checklist.

As the colonial period was drawing to a close on the Yucatán, the Spanish decided to construct just one last church. That church, the Iglesia de San Cristóbal, which took some 40 years to complete, can still be visited today in the neighborhood of the same name. And while you might be thinking that all churches are one and the same—if you’ve seen one, you’ve seen them all, right?—the San Cristóbal Church is worth a visit, not least for its delicate clam shell-esque concave façade.