Food and travel go hand-in-hand. Food—at both street food stalls and fine dining restaurants—tells the story of a destination with local ingredients and traditional flavors. While we’re lucky enough as travelers to eat delicious things all over the world, the things we love the most can be found close to home, too. From caviar to tacos, here are the meals that wowed our taste-buds this year. 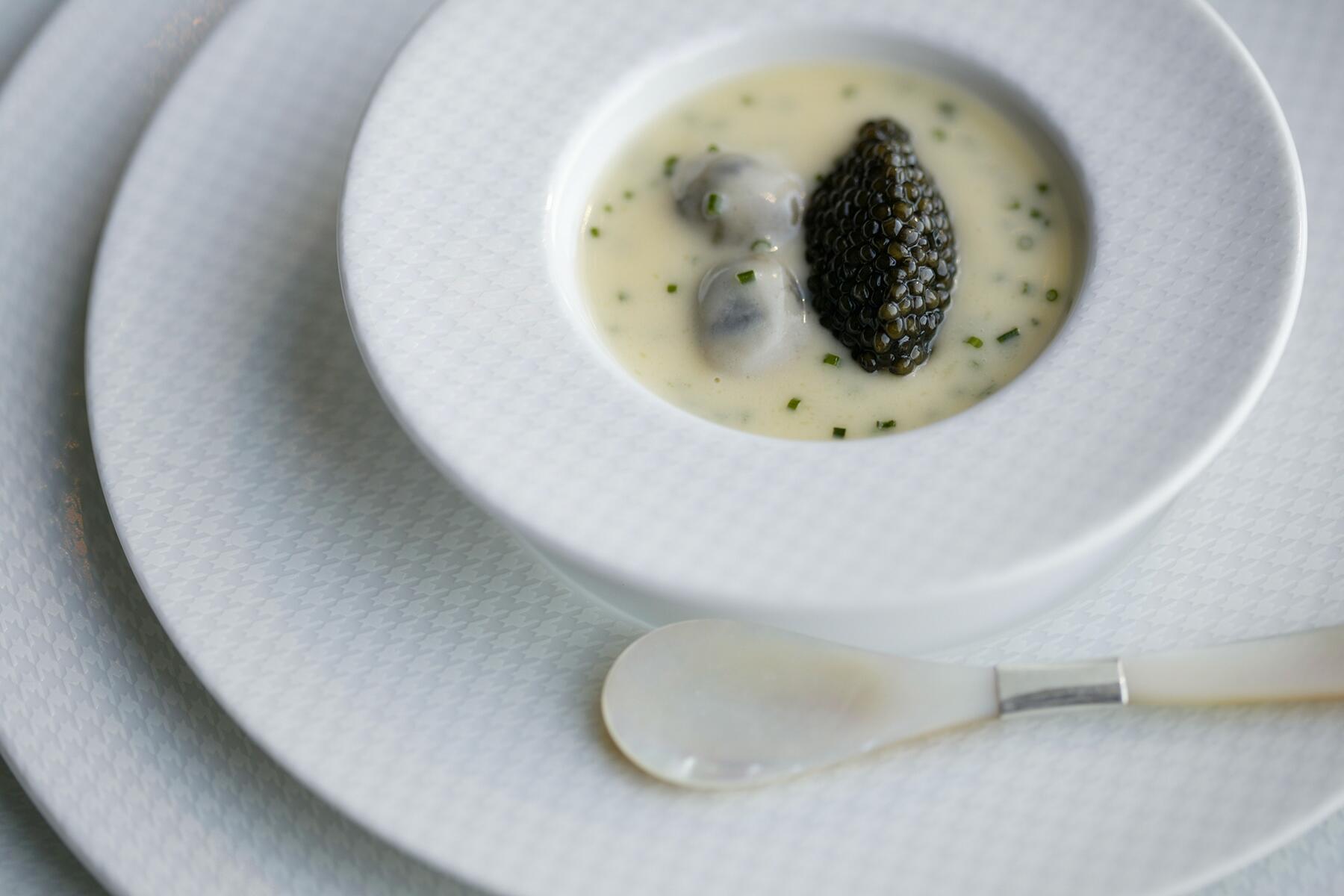 I had one of the most wonderful meals of my life this year at The French Laundry, celebrating my Mom’s 70th birthday with my three sisters. The restaurant is 25 years old and one of the pioneers of the farm-to-table tasting menu craze and although the New York Times doesn’t think it’s worth a special visit, it was everything I dreamed it would be. One of the most memorable and delicious courses of the night was a classic called Oysters and Pearls, which has been on the menu since 1996. It’s a warm oyster served in a tapioca cream and topped with caviar. But a visit to French Laundry isn’t just about the food, it’s about the experience. With good wine, great company, and friendly service, it’s a restaurant experience you won’t forget. I cried at the end of the night when they presented my mom with a birthday present—a custom-engraved bottle of champagne—and invited us into the kitchen to meet the chefs. 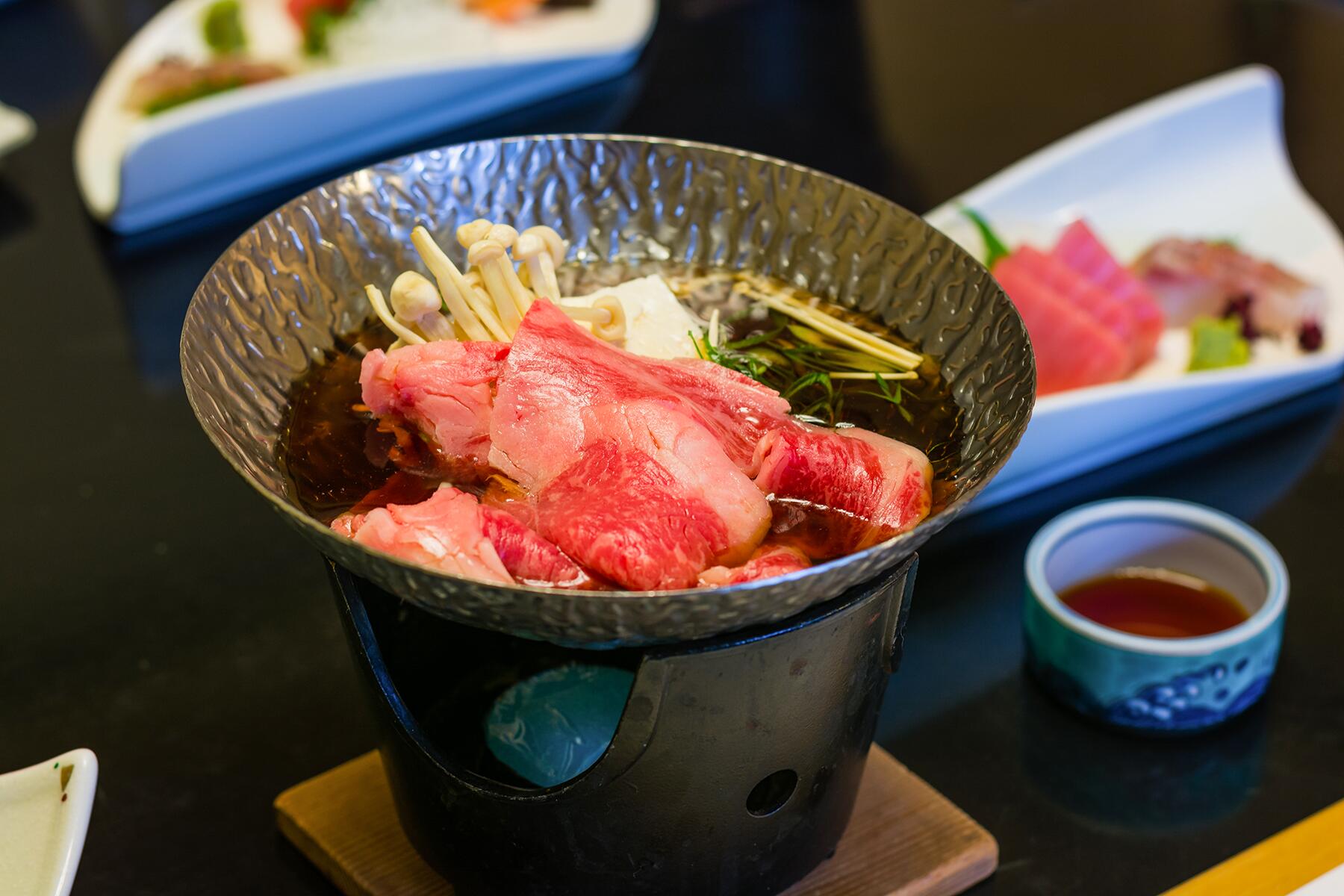 The best thing I ate and drank this year was a Kaiseki, a traditional multi-course Japanese dinner, with sake and wine pairings, at Ryokan Kanamean Nishitomiya in Kyoto.  This elaborate 10-course seasonal meal was presented with great care, precision, and beauty, and our hosts tended to us with genuine sincerity and supreme hospitality. It was just the most luxurious meal in pace, feeling, and taste. From the autumn crab raised at Okayama prefecture to the abalone boiled gently with peach, to the Japanese beef shabushabu … sigh, it was perfection. I loved being presented with the Matsutake Japanese mushrooms before they were cooked (first in a sea bream and fish soup and then later tempura-style) and am now incorporating this little “celebration of the veg” into my own kitchen efforts! 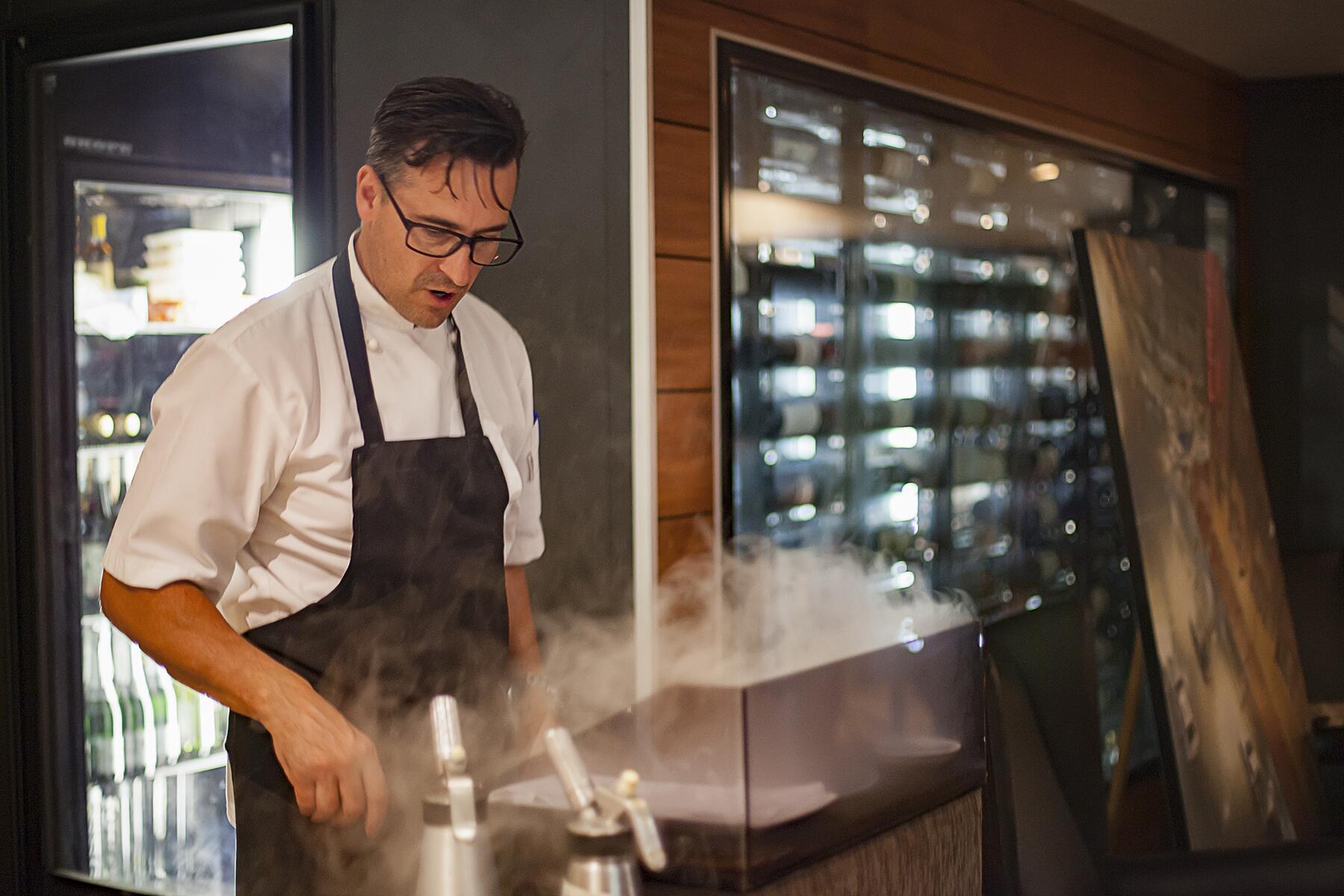 A Dessert That’s a Work of Art

While visiting Brisbane, Australia this spring, I was treated to dinner at the fancy-schmancy Alchemy Restaurant along the city promenade, and the incredible prix-fix menu culminated with a dessert demonstration by head chef Brad Jolly in which he dips nibbles like honeycombs, ice creams, and sorbet in liquid nitrogen to freeze them right before your eyes. Pop them in your mouth for a wintery taste of unique flavor combos like whiskey sour with lime and passionfruit, and don’t forget to capture the experience with a video selfie of the cold stream of dragon’s breath that finishes off your tasting. 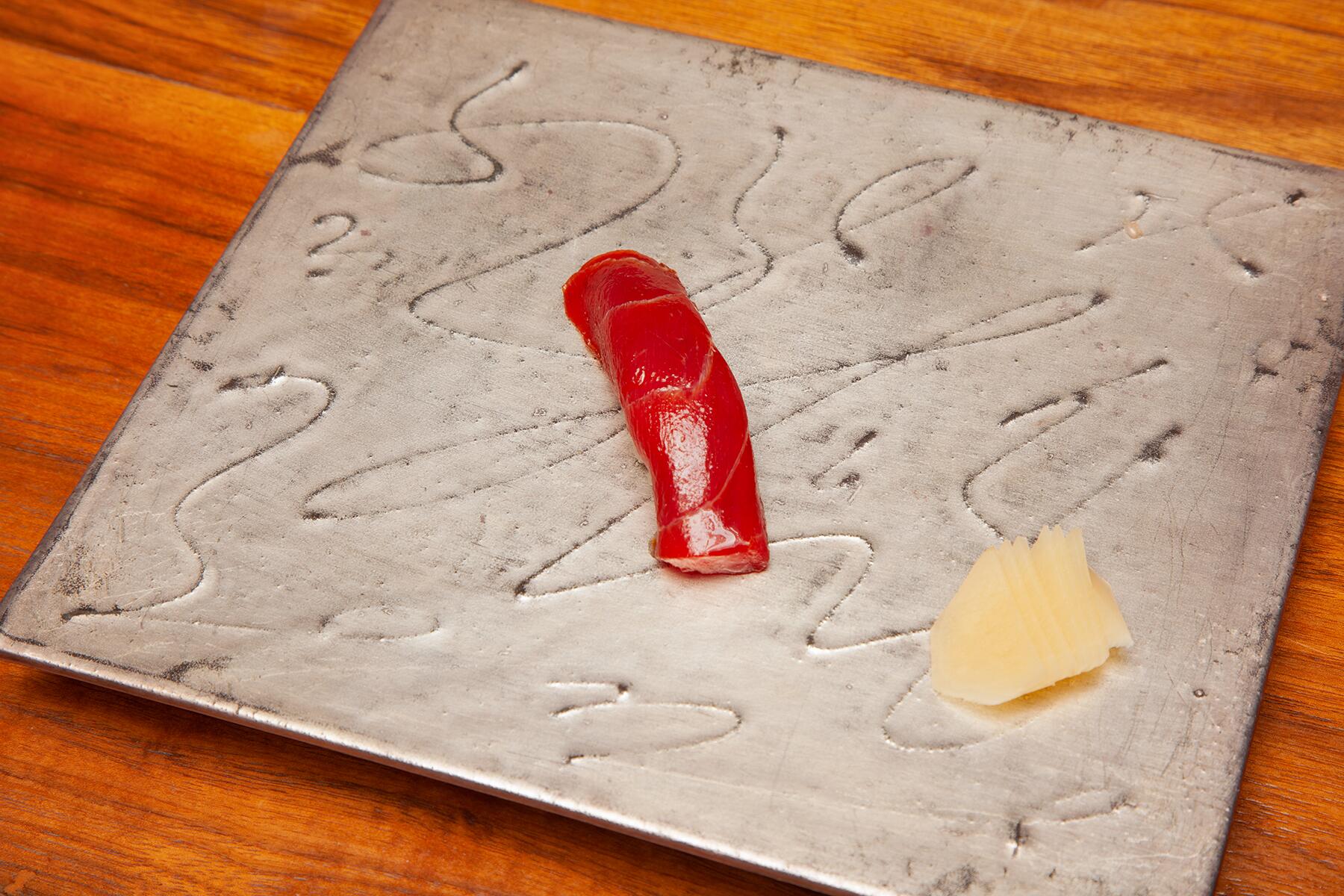 I’ve wandered three continents this year and gotten plenty fat off of incredible eats. There was a Vietnamese pancake at Banh Xeo Ba Duong in Da Nang that I could happily eat every single day for the rest of my life; a decadently sumptuous Indian feast fit for a maharaja at the Michelin-starred Golden Peacock in Macau; a salmon and risotto number served in the warm coziness of the West Coast Wilderness Lodge on a cold day in the fjords of Canada’s Sunshine Coast. But the single best thing I tasted in 2019 was found within a few miles of my house.

Q Sushi is a blink-and-you’ll-miss-it restaurant in Downtown Los Angeles, but once you walk through the discreet entrance, it feels as though you’ve left the piss-soaked streets of DTLA behind and, like something out of a fantasy story, have been magically transported to a glorious land far far away. As though stepping through a wardrobe or into a looking-glass, inside I found a gloriously serene Michelin-starred sushi-ya. Over 20 courses, Chef Hiroyuki Naruke presented an impeccable menu. But one dish went beyond even this most exquisite of meals: three pieces of Bluefin tuna, each fattier than the last. I’m not a religious man, but when chowing down on this, I heard the Ode to Joy blaring and the white transcendent call of the angels. 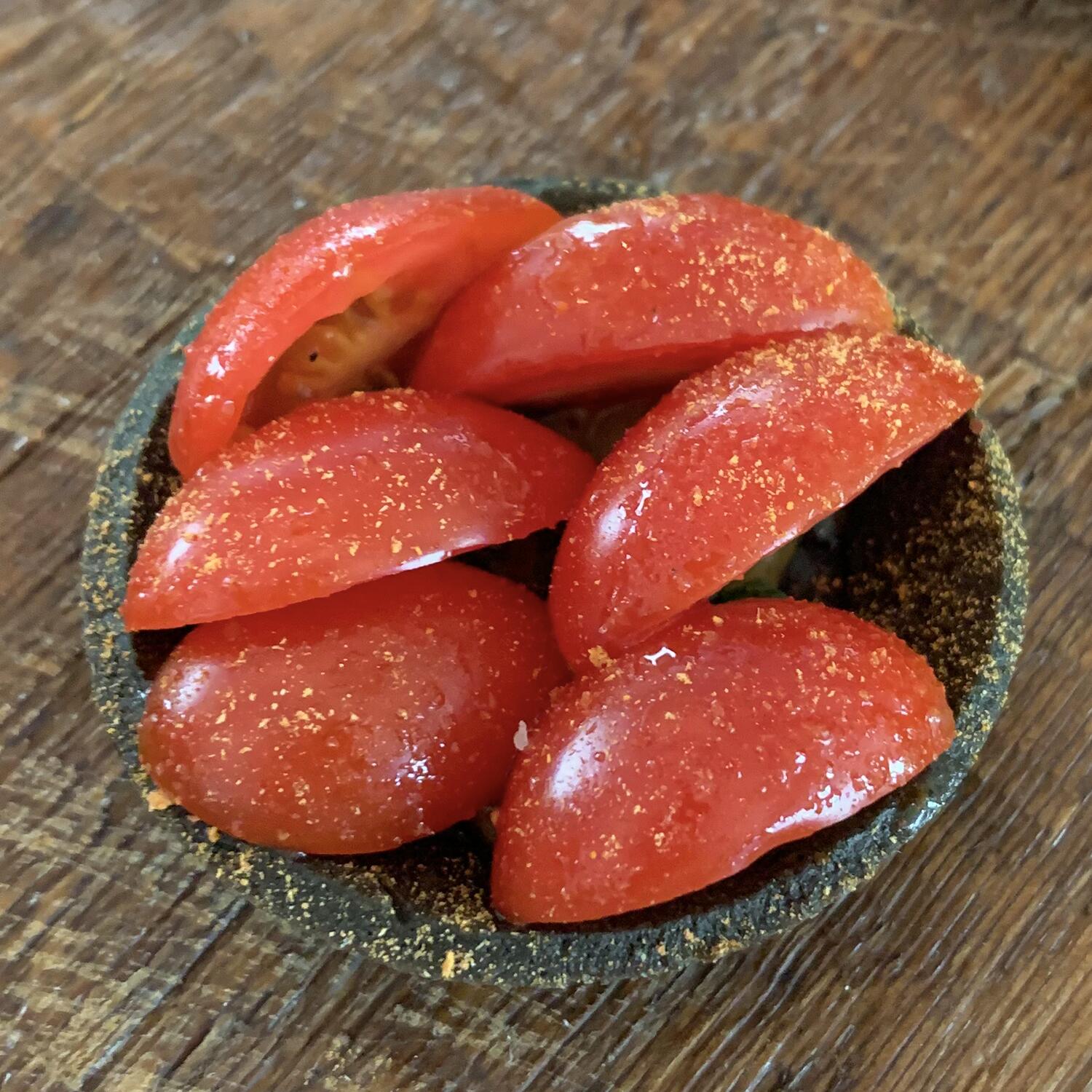 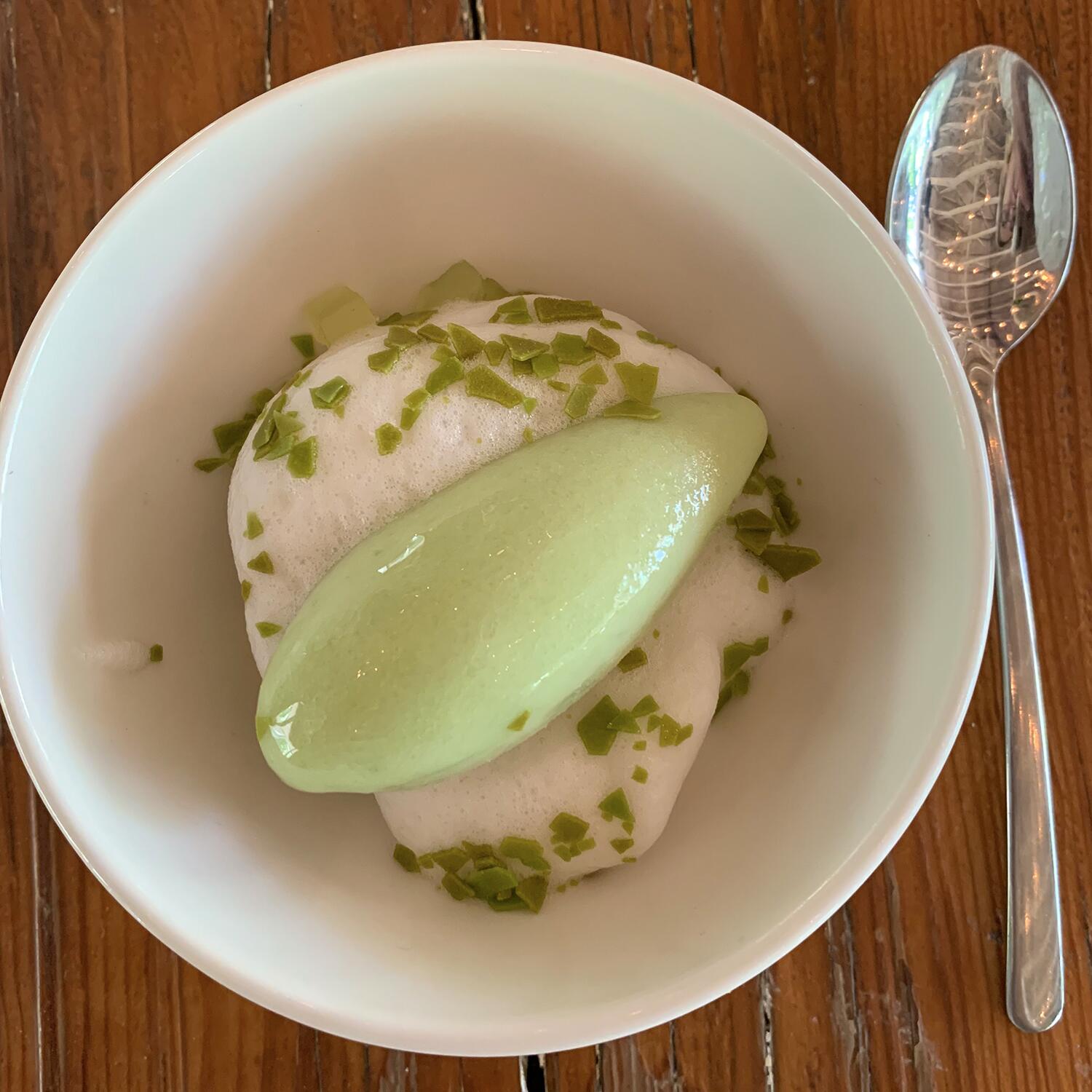 PHOTO: Rachael Roth
Previous Next
5 OF 13

A Meal With Ghetto Gastro

I went on a camping trip with Airbnb that was catered by a Bronx-based culinary collective called Ghetto Gastro. The four chefs—Jon Gray, Malcolm Livingston II, Pierre Serrao, and Lester Walker—create innovative plant-based dishes that are stunningly presented and mind-blowingly tasty. We were treated to mangu pasta, a charcoal tomato tart, and cucumber sherbet that were are all *chef’s kiss*. Ghetto Gastro, which also operates in the art/design/apparel sphere, doesn’t have a brick and mortar space, so you’ll have to get in touch with them about a private event if you want to try these concoctions. 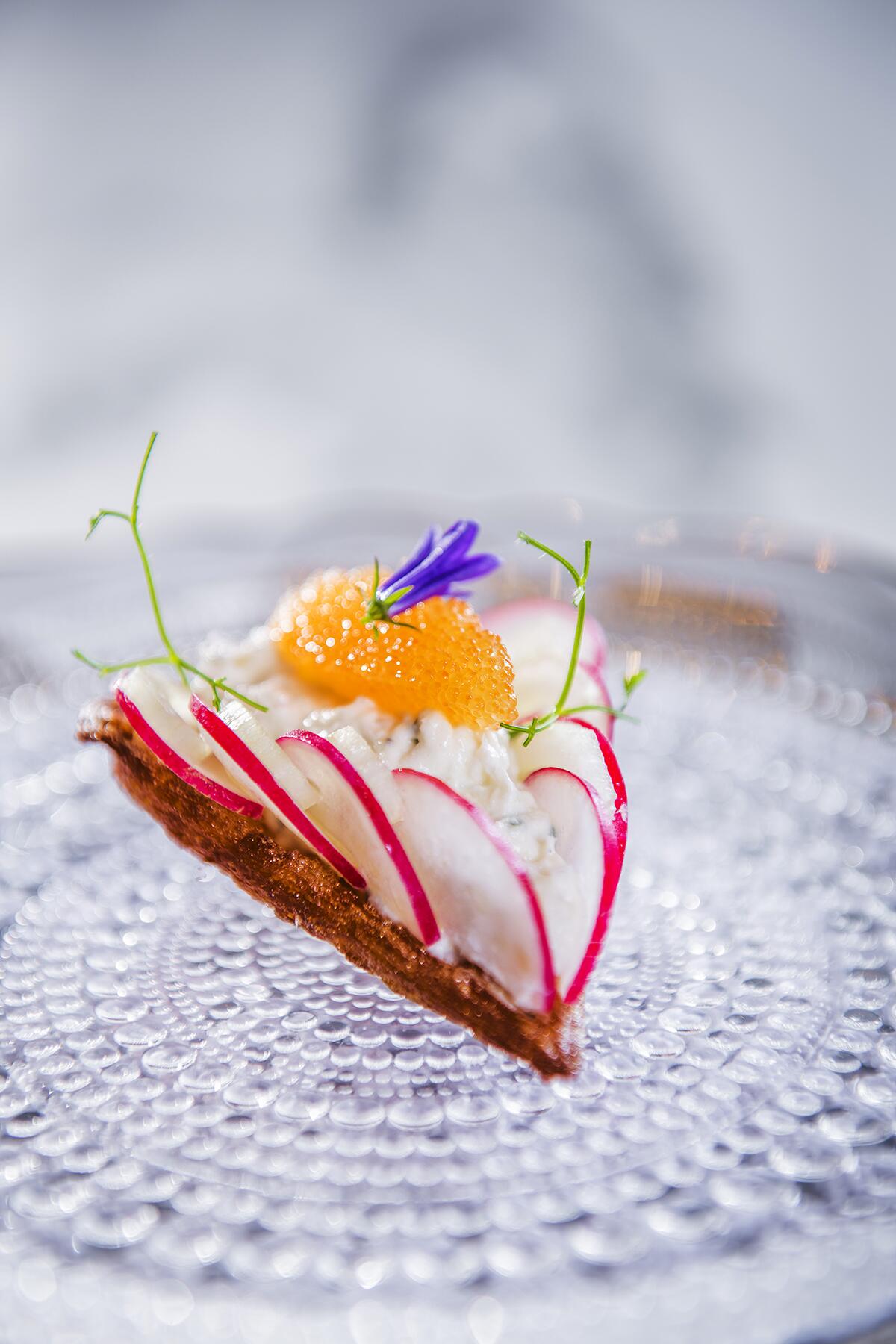 PHOTO: Courtesy of Britannia
6 OF 13

You know how social media has life events—marriage, new job, new city? I may add “Ate at Speilsalen” to mine. Nothing tops the 10-course (5-hour!) dinner I had here in Trondheim, Norway’s Britannia Hotel, which recently made Fodor’s list of top hotels in the world. And let me tell you, that trip had a lot of stand-outs: a 30-year-old horse mussel at Fiskebaren in Copenhagen, and canard à la presse at the Michelin-starred Marchal. But the meticulously-crafted bites and wine pairings at Speilsalen, inspired by the chef’s life journey, were on a whole other level. From the caviar-topped amuse bouche to the elderberry hibiscus ice cream frozen with liquid nitrogen, it was like a really cool theatrical performance—that I was eating. The whole production left me wondering how I’d ever face my own kitchen again. 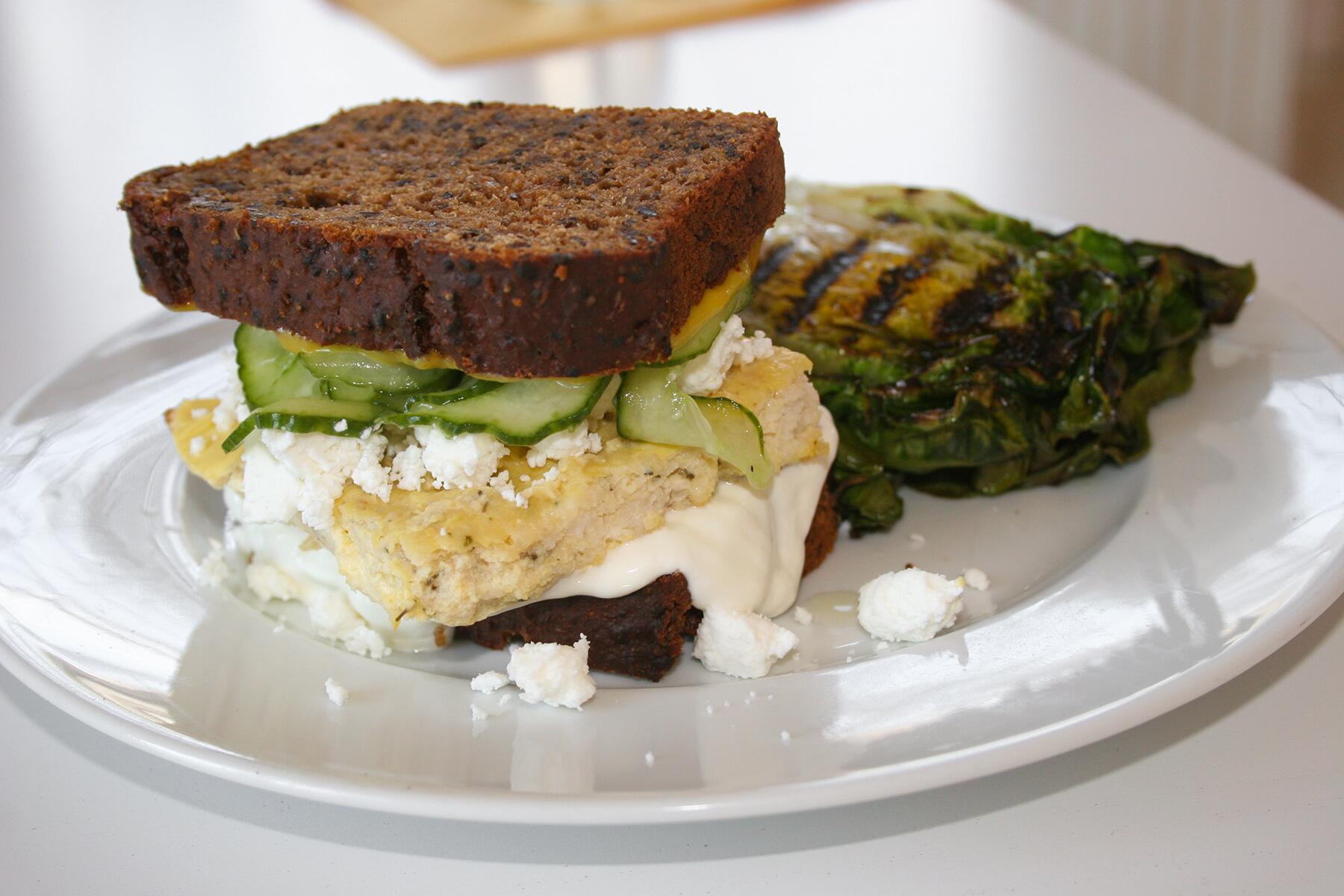 A Sea-Inspired Meal in Finland

It may have been the beautiful weather, or the dappled sunlight streaming through the trees on the most perfect garden patio setting, or the fact that I was on an island in the Finnish Archipelago, but everything was memorable about my visit to Kopmans, a charming cafe and bed & breakfast in the town of Nauvo, including their famous pike burger. The bread is made fresh every day, the pike steak is fresh from the sea, and the combination of the ouzo sauce, feta cheese, pickled cucumber, and sea buckthorn mustard was so good that I was using the extra bread to soak it all up. Served with a side of grilled lettuce and sea buckthorn vinaigrette, the fresh flavors, simple ingredients, and glorious setting made the dish all the more amazing. My mouth is watering just thinking about it. 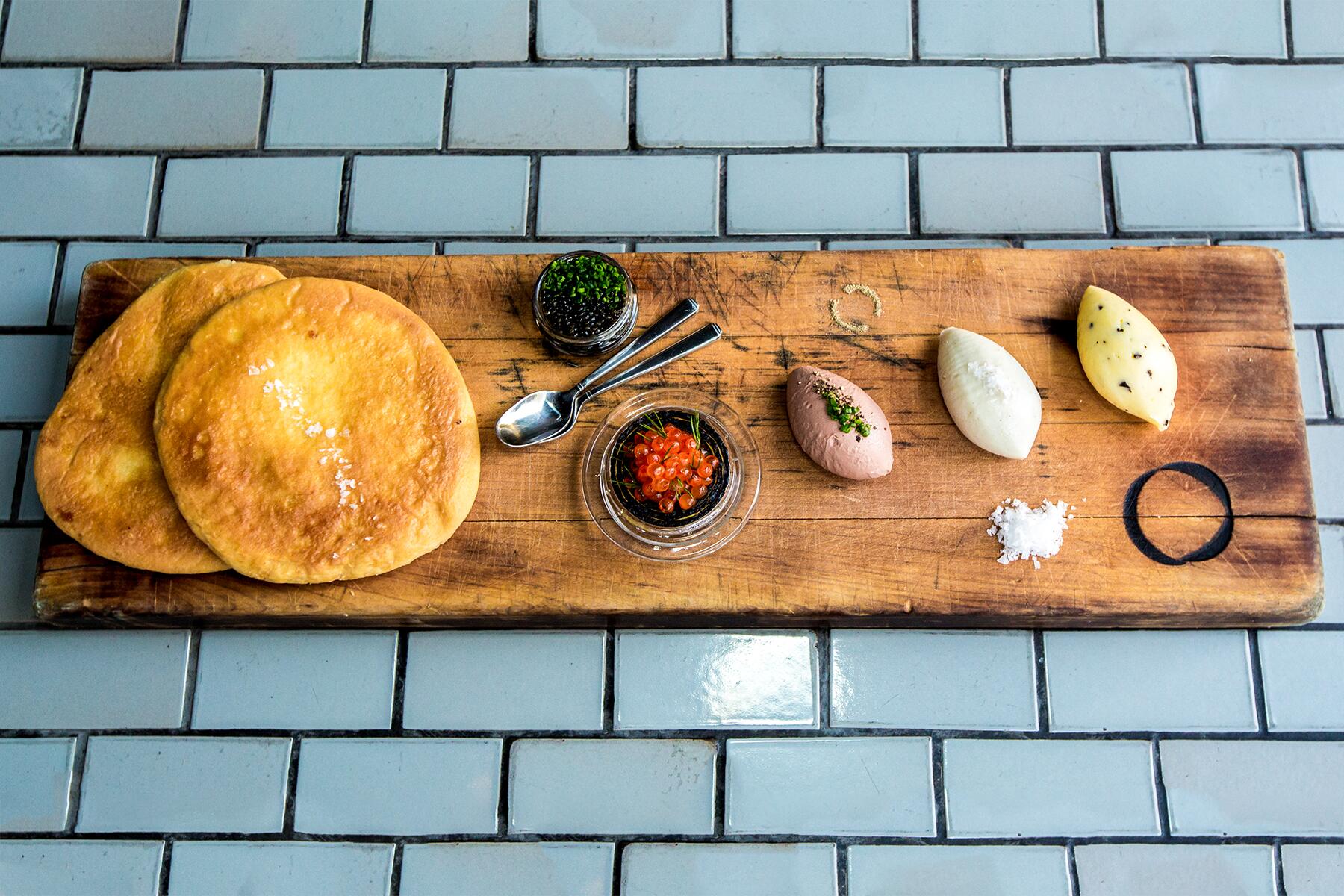 The Most Delicious Caviar in the World

The best thing that I ate this year was Royal Ossetra caviar at Otium in Los Angeles. It’s some of the most delicious caviar in the world, and Otium is one of the few restaurants that serve it. And they pair it with pita points slathered in what I can only imagine is divine butter. It’s a simple meal, but one of the best ones you can have in Los Angeles. I recommend pairing it with Nicolas Feuillatte champagne for a transformative experience. 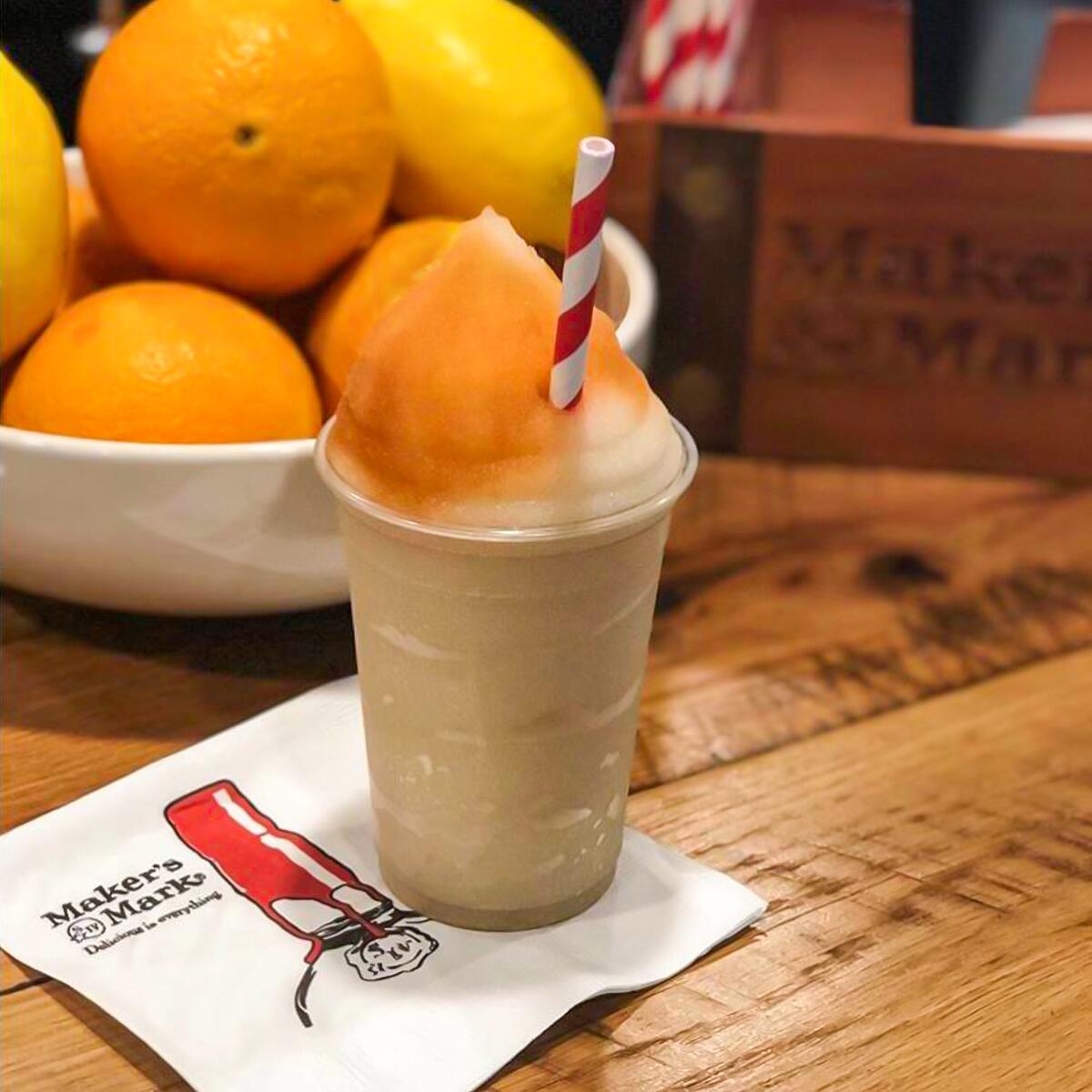 During a visit to Lexington, Kentucky, I had a fabulous lunch at Star Hill Provisions, the farm-to-table restaurant at Maker’s Mark Distillery in nearby Loretto. Chef Newman Miller, who was raised nearby and has worked at Louisville’s Brown Hotel, puts a modern spin on local dishes like Kentucky hot brown sandwiches and country ham and aged beer cheese. And you can’t leave without trying a Maker’s and Ale-8-One slushie. 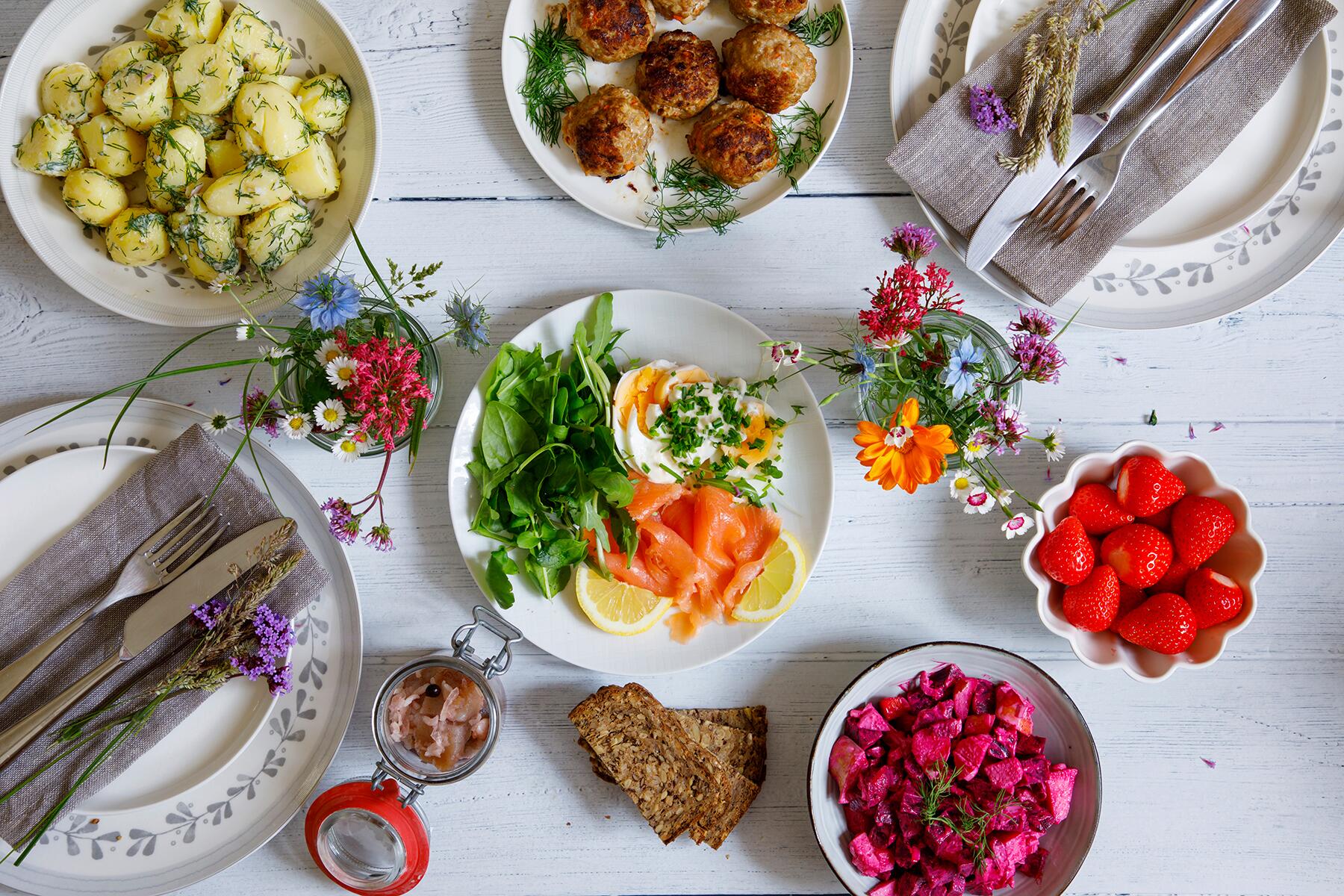 A Midsummer Feast in Sweden

The best thing I ate all year was certainly a Swedish Midsummer’s feast on a farm in Ahus, Sweden. It was a vast melange of locally-sourced, traditional farm-to-table Swedish foods: Knäckebröd (crispbread) with gravlax (cured salmon) and other meats and cheese, potatoes, sill (pickled herring), horseradish and mustard sauces, potatoes, eggs… I love a good smörgåsbord, my friend, what can I say! I think I ate the equivalent of a medium-sized truckbed of crackers and cheese that evening. 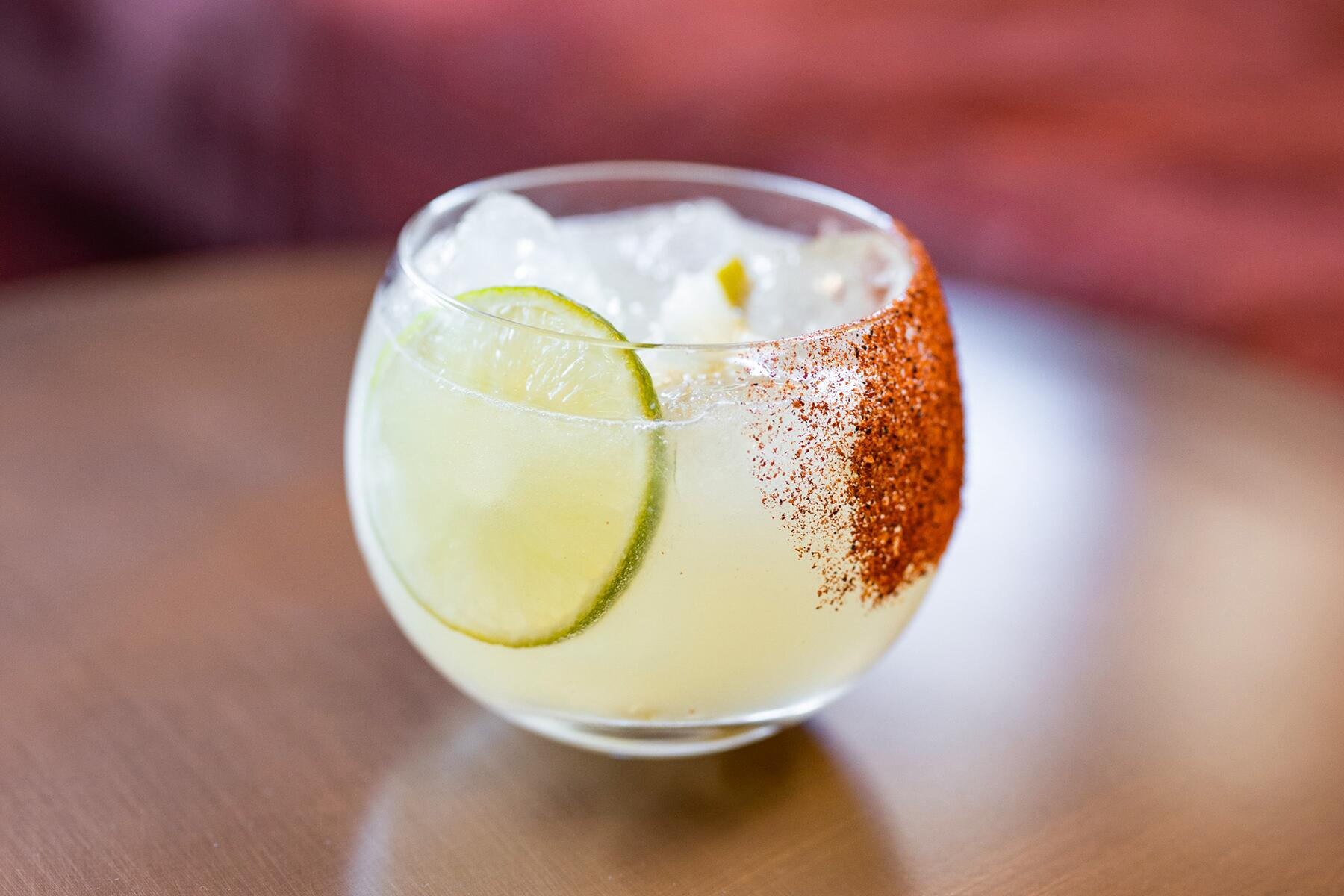 The best thing I ate this year? Everything I had Rooster and the Pig, a Vietnamese-American restaurant in Palm Springs. Most items on the menu are intended to be shared, so a friend and I placed three orders: Green papaya, Asian Beef Jerky, and crispy shallots; lemongrass pork & shrimp rice noodles; and shrimp and sweet potato fritter.

I’m also a fan of a relatively new mezcal bar down the street from me in the Los Angeles neighborhood of Echo Park, Bar Caló—they make a mean mezcal margarita. 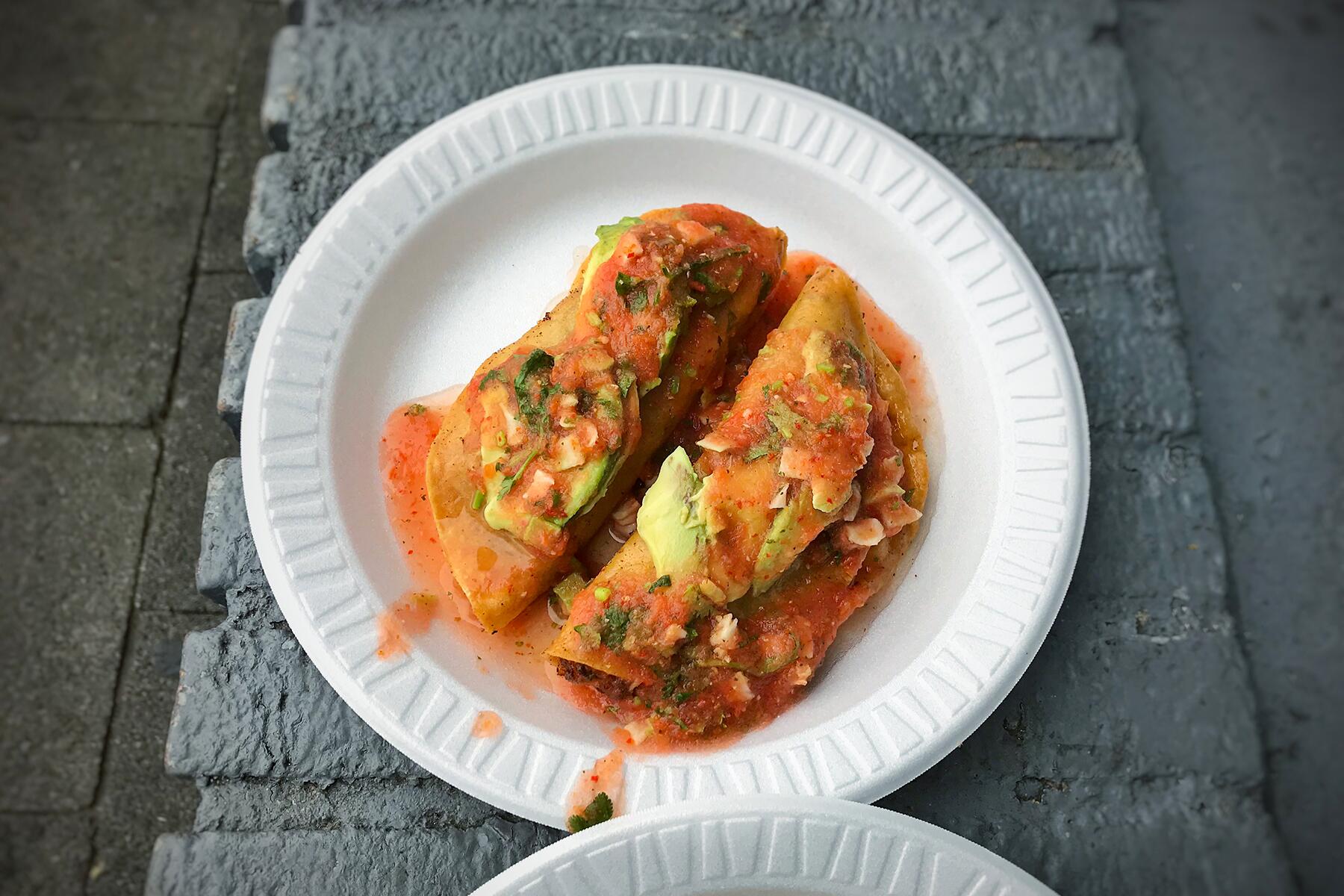 The World’s Most Perfect Shrimp Taco

It’s so rare that things live up to—let alone exceed—the hype. And yet, I’m here to tell you, miracles happen. I know because it happened to me. When I went to the much-lauded Mariscos Jalisco food truck in the Los Angeles neighborhood of Boyle Heights, I was certainly expecting to like and enjoy my meal. But when I finally sampled their legendary crispy shrimp tacos, I wasn’t just tasting something great, I was experiencing something great. That thrill that comes with feeling like there is good and magic in the world if we know where to look for it—it exists within a perfect crispy shrimp taco. 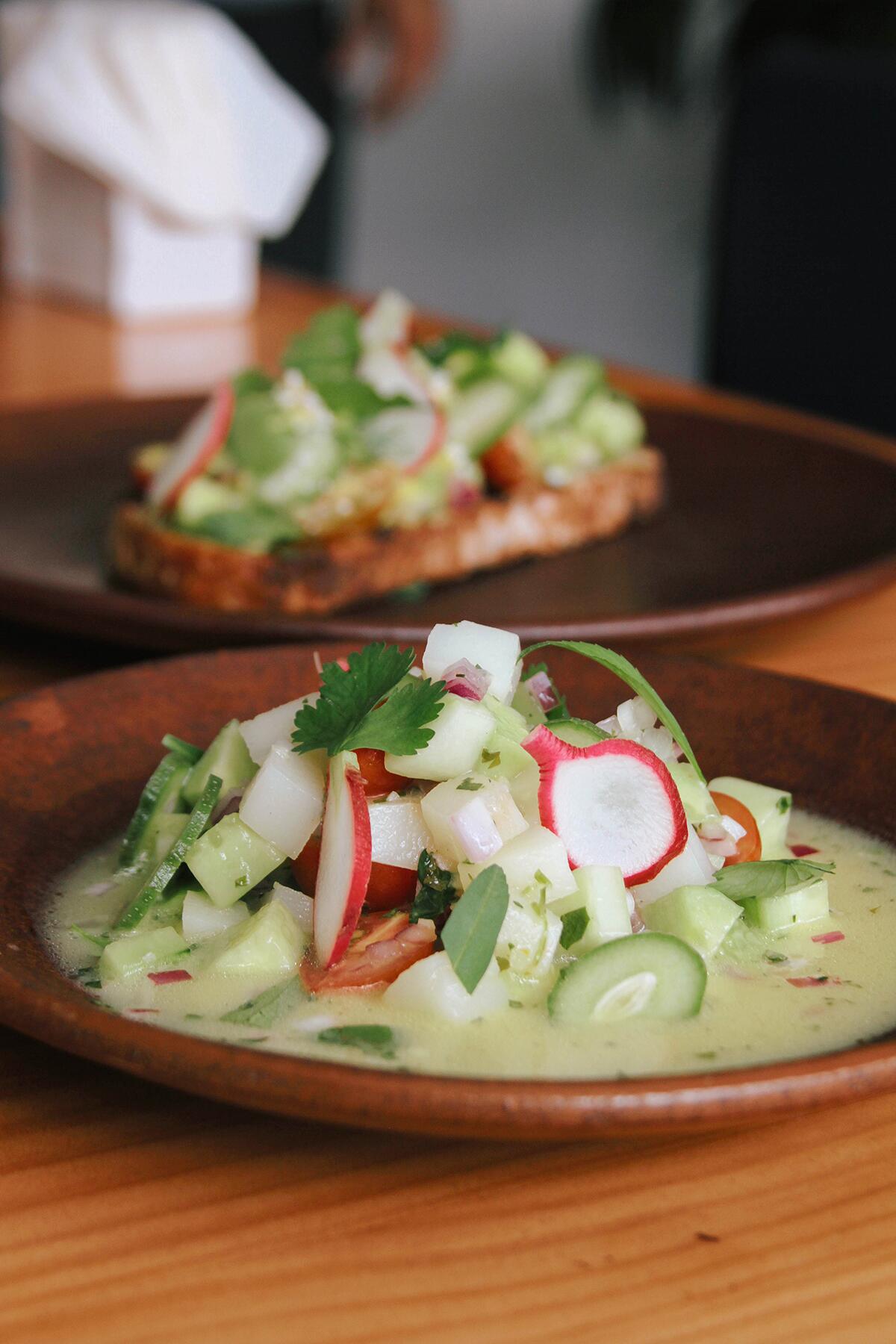 A spring trip to Costa Rica introduced me to the ever-expanding world of Costa Rican cuisine: local, sustainable, and delicious. My favorite meal was at the San Jose eatery Al Mercat, where I feasted on cucumber and yucca ceviche, tamarind pork ribs, and an entire honeycomb topped with golden berries and cacao for dessert.