A meal from a doomed ship, eaten in a haunted hotel: the perfect evening out.

The best, most eccentric night out in Colorado can be found roughly an hour outside of Denver in the library of a haunted hotel. Once most famous as the setting of Stephen King’s The Shining, The Stanley Hotel has been making another name for itself in Colorado’s culinary scene with a series of surreal, chef-driven “Table: A Culinary Journey” series of dinners.

For their latest addition to the series, this historic hotel has resurrected the last dinner that first class passengers on the Titanic ate before it sank on April 14, 1912. I stopped by to find out what it’s like dine back in time in one of the world’s most famous haunted hotels.

The first thing you should know about this Table dinner is that it’s cool to show up in a period costume. There were enough vintage tuxedos and beaded, circa-Titanic dresses to make the lobby feel decidedly 1912. The Stanley has always been enthusiastic about embracing those that are enthusiastic about the past, on any plane. The hotel hosts seances most nights of the week, tours of the most historically haunted spots on the premises, and even appointments with famous resident psychic Madame Vera (if you can manage to get an audience, she’s usually booked solid).

Everything here involves a little bit of theater. Our evening begins with champagne opened by scimitar. Between each of our 10 courses there will be mini Ted Talks, a bit of pageantry, and plenty to drink before, to our collective surprise, we’ll find ourselves going down with the ship.

But first, it’s time for food. Seating starts promptly at 8:30 p.m., the same time it did onboard the Titanic on April 14, 1912, just a few hours before the iceberg was just spotted.  Dinner takes place in the library of The Lodge, directly next to a miniature version of Stanley hotel, built in 1910. Our menu is an exact copy of the only surviving menu on The Titanic, rescued by an unknown first-class passenger, only to show up mysteriously via an anonymous donor in a Dallas auction house (in a lot that included the license plates on the car JFK was assassinated in) roughly 100 years later. 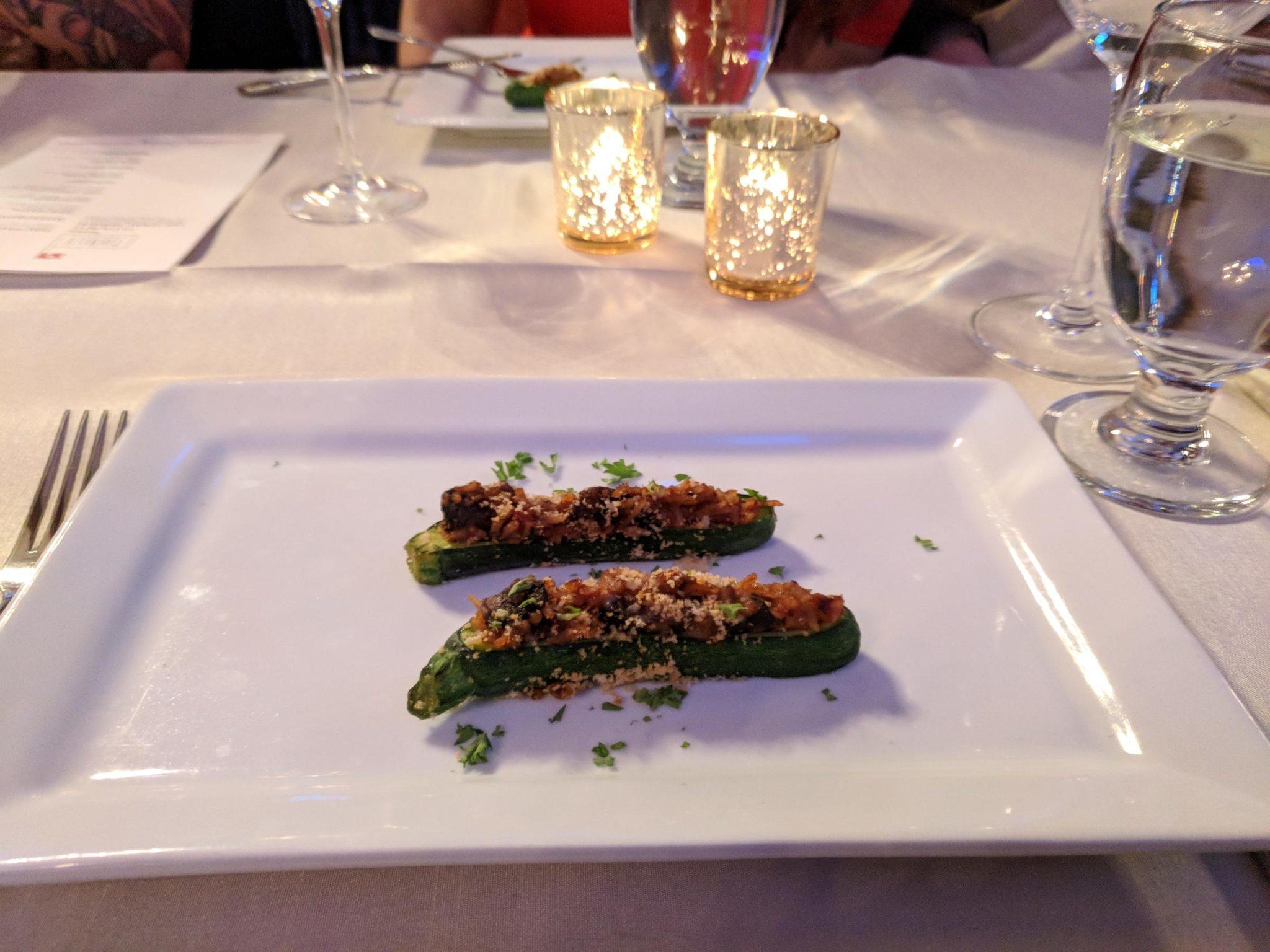 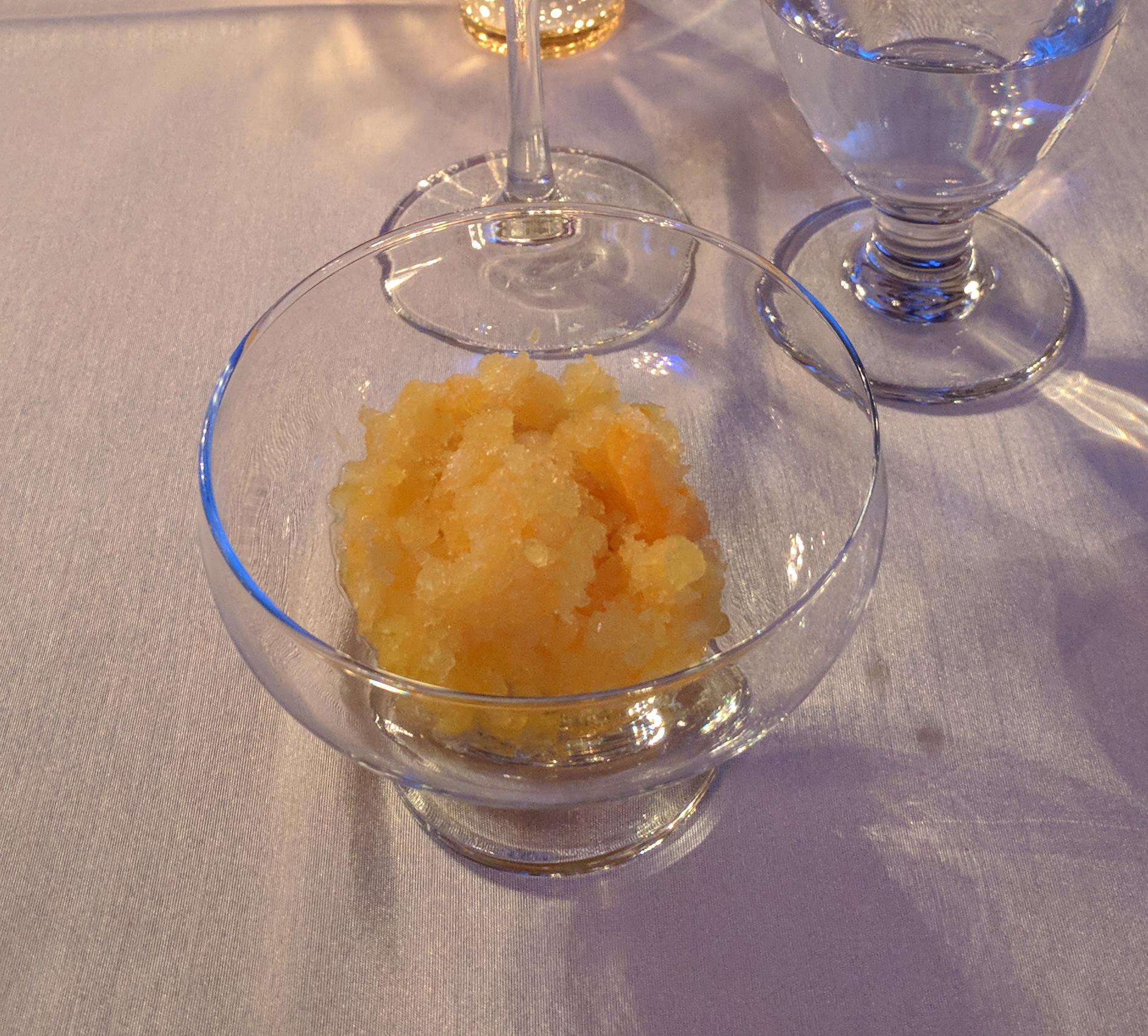 In a world where even the world’s most remote dishes have starred in their own episode of Parts Unknown, the items on the menu are excitingly, temporally foreign: chartreuse jelly, vegetable marrow farci, punch romaine, roast squab, and other dishes that are mostly extinct.

They have been revived by our head (and former French Laundry) chef Angus McIntosh who has a mad scientist’s excitement about bringing these dishes back to life. As each dish is placed in front of us, he gives us its provenance and an anecdote or to about the culinary adventuring it took to make it in 2018.

Our gelatin is painstakingly (and a little gruesomely) made from scratch, but our meat is store-bought (not killed in a live hold as it would have been done on the ship Angus admits, a little disappointedly). Concessions are made when necessary, but everything is as true as possible to the past to make sure that “the flavors and the tastes … are exactly the same tastes and flavors that they had,” Angus tells us, to make each of our ten moments of time travel genuine ones.

Our second course, consomme Olga, is flavored with pickled cucumber, celeriac, and a dash of port wine just before finishing. It tastes, at first sip, like a time when people used less salt and ate elaborate Downton Abbey-style dinners at home with the idle rich. But, the bites of pickled cucumber taste like Koreatown banchan, a modern and familiar note, a genuine smile in a daguerreotype, a bridge between then and now. 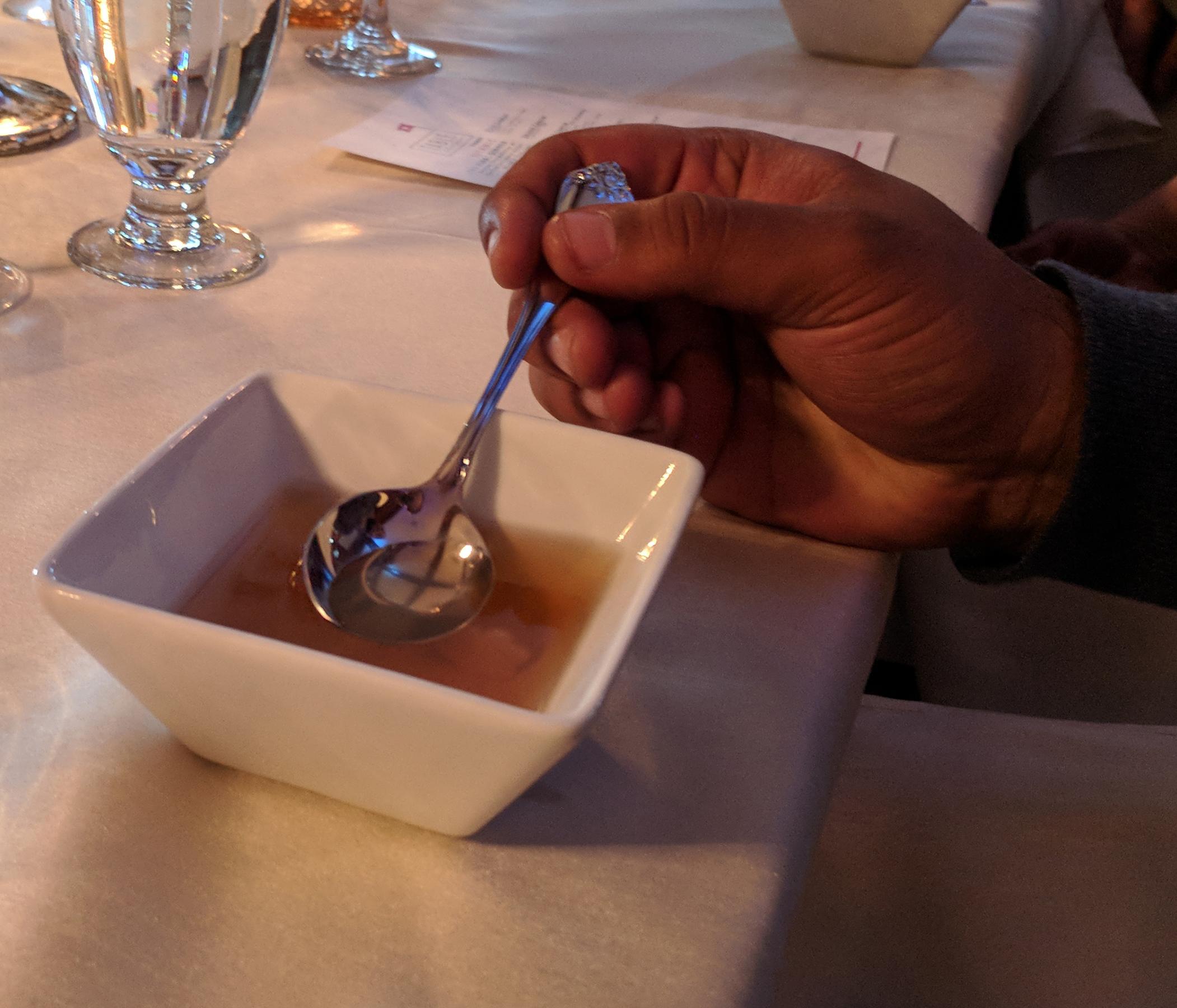 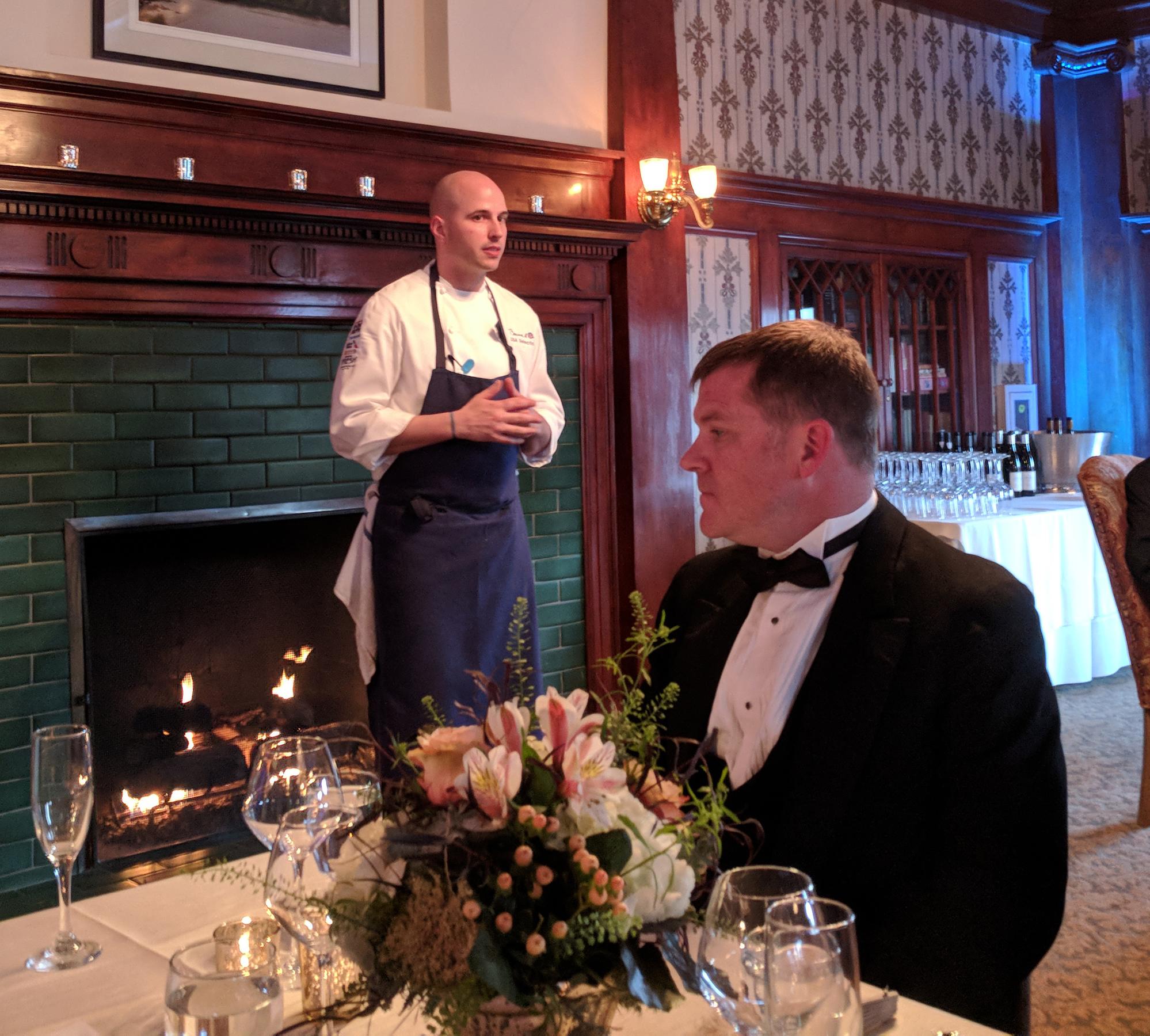 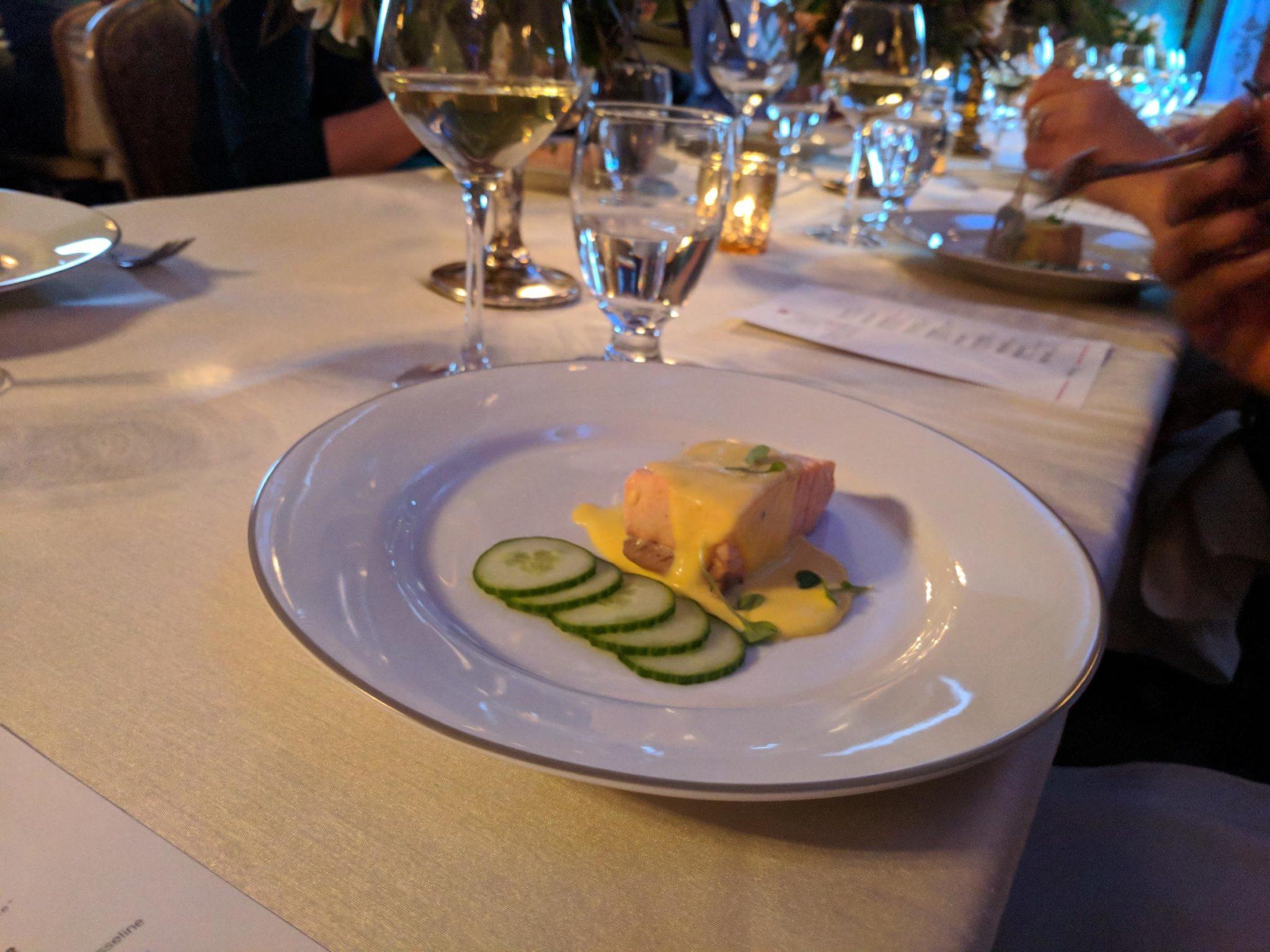 The wine list is pure historical fiction. As no wine record survived the ship, our sommelier has curated his own based on “the coolest wines they had back then.” Our 10 courses include bottles like a playful, hand-riddled Brut (Hubert Clavelin and sons) paired with oysters. A Beaujolais (Daniel Bouland’s Bellevue), chosen for its “notes of old-school herbs” (chervil and tarragon), paired perfectly with our fourth course: poached salmon under rich, buttery mousseline–an ancestor of Hollandaise delicious enough to deserve a comeback.

During the sixth course, the Titanic sank. As we puckered over tart punch romaine with delightfully bitter citrus pulp, the room flooded with cold air (a clever parlor trick). Our hostess, Marnie Cullen, directed our attention to the ice sculpture of the Titanic, mid-sink. Guests took turns pressing their hands against its starboard side for minutes at a time to, now that they had eaten the Titanic’s last meal, see how long they could withstand the freezing north Atlantic waters that consumed it.

Later, the guests of Table learned that we weren’t the first people to have experienced both The Titanic and The Stanley. Once upon a time, our hostess tell us, the guests of The Stanley included some of the most well-known money in the world, including John Jacob Astor, Benjamin Guggenheim, and Margaret Brown.

These wealthy guests often spent entire summers at The Stanley Hotel, until the year a freak storm lead to an undetected gas leak that ignited and blew away 10 percent of the hotel (some of which is still embedded in the surrounding mountains).

That unfortunate series of events led those three guests to change their summer plans and buy a ticket aboard the doomed Titanic instead. Margaret Brown, who survived, became known as The Unsinkable “Molly” Brown (played by Kathy Bates in the 1997 movie), but John Jacob Astor and Benjamin Guggenheim went down with the ship.

All of the Table: A Culinary Journey dinner guests also survived. If you’d like to catch the last dinner on the Titanic or any of the other chef-driven meals at Table, head to The Stanley Hotel quick before it reaches its tipping point.