On a quiet side street in Madrid’s multicultural neighborhood of Lavapiés, a cluster of incandescent lightbulbs act as a beacon for disciples of the weird and the wonderful. 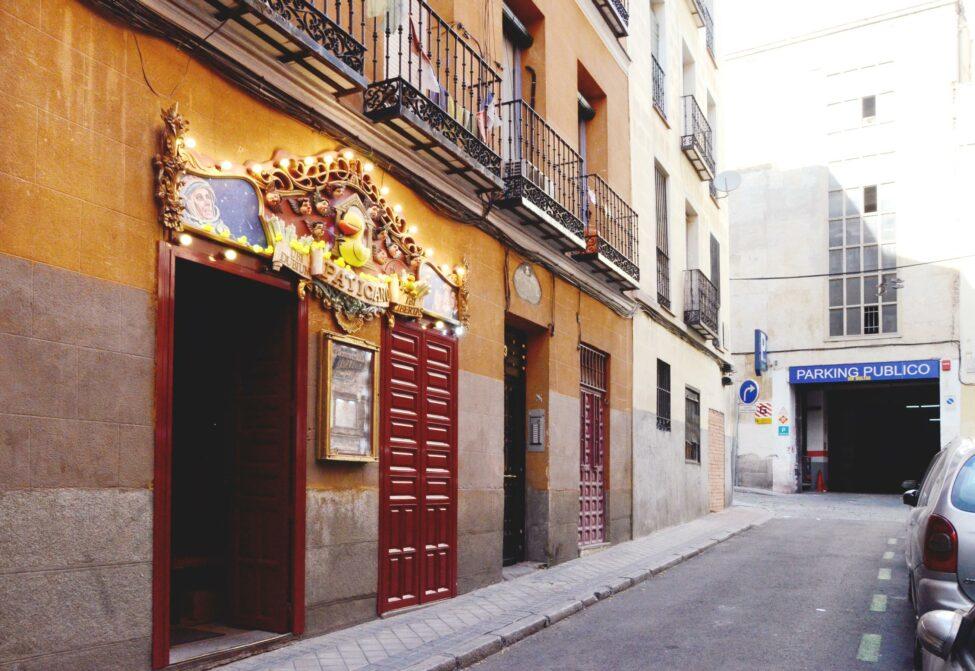 It’s just before one o’clock, and worshippers are already filing in for duck mass. The 6 red-velvet pews fill up first, with latecomers perching on two wooden staircases above the pulpit. Not one corner of this room has been left undecorated, and somehow around 50 people manage to squeeze in too. The last of the worshippers settle into a gap by the door, just in front of a glass cabinet containing a selection of charred remnants from the original Duck Church.

It was never going to be easy opening an atheist church in Spain, but no one expected what may have been an arson attack. The contents of the glass cabinet—blackened cherubs, a scorched book, a partly melted rubber duck—are a powerful reminder of the challenges surrounding freedom of expression. Positioned carefully by the door, the objects double up as an amulet to ward off any heinous souls, because the Duck Church is a happy place with one main objective: to turn that frown upside down! 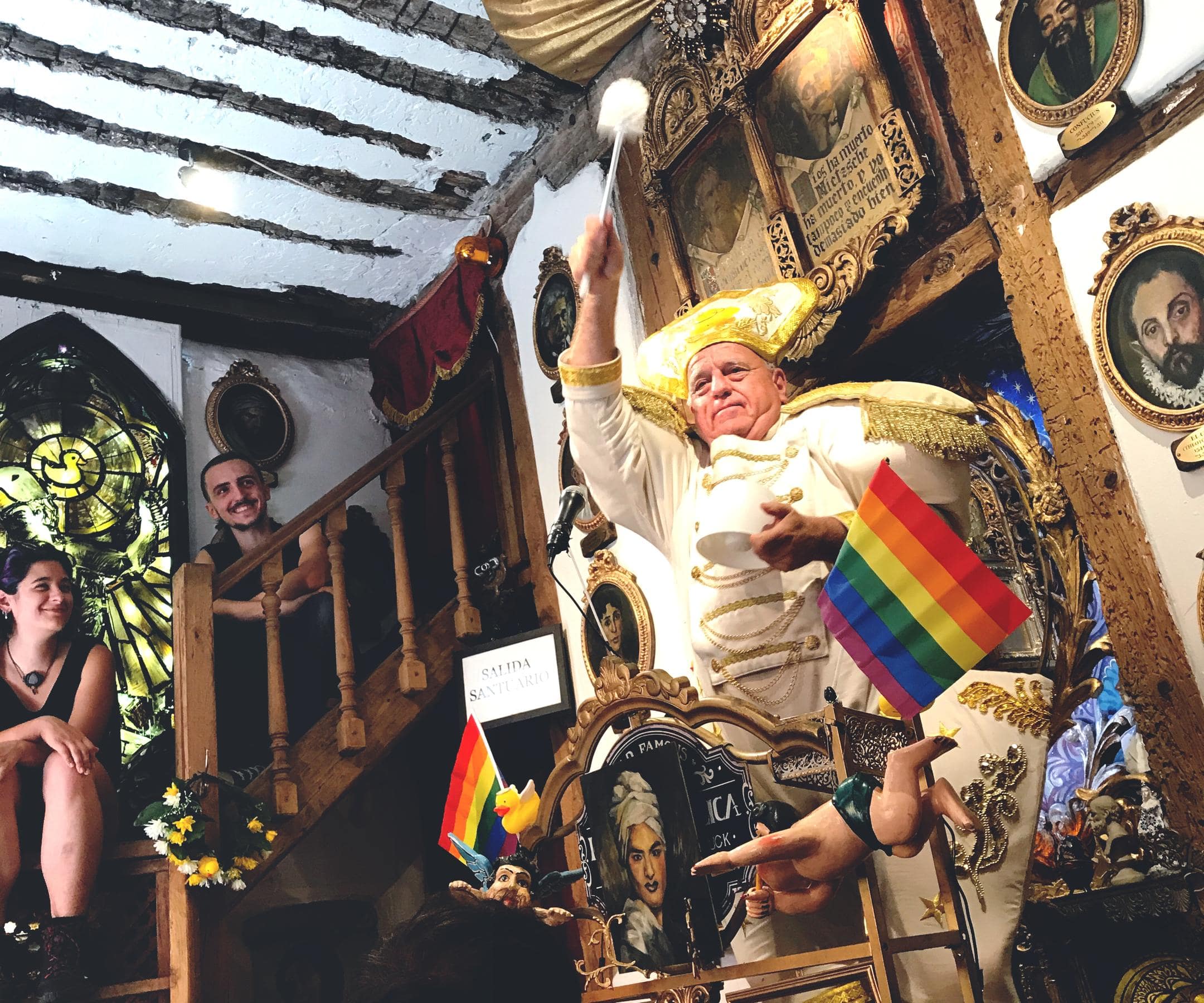 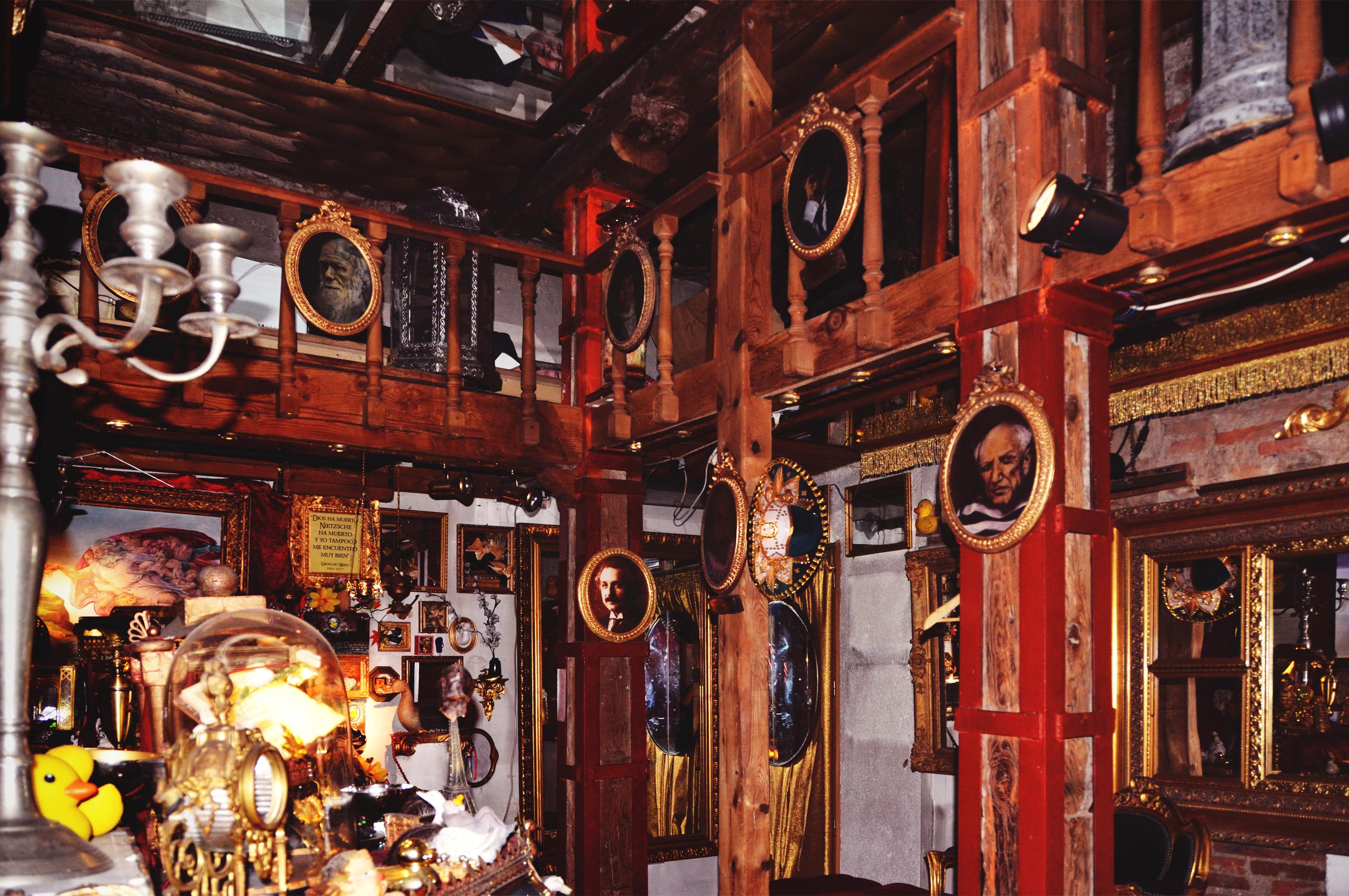 La Iglesia Patólica (the Duck Church) is a tongue-in-cheek concept straddling an eccentric middle ground between place of worship, cabinet of curiosities, and clandestine club. It’s the creation of Leo Bassi (aka the duck priest), a classically trained clown who can even lay claim to having been born in the circus. His parents (both clowns) were touring the U.S. when, in 1952, baby Leo was brought onto the stage of life. Little Leo would later be trained up to join his parents in the circus, forming one-third of the successful Bassi Trio.

The Bassi family tradition of circus performance stands uninterrupted for over 170 years, with classical skills such as feet juggling passed down from generation to generation—that is, until Leo decided that he wanted to carry the Bassi baton in his own way. He abandoned the red velvet curtains and took to the streets—a platform where he was able to explore performance techniques much truer to his personality. He traveled from Europe to Japan, through Pakistan and Thailand, but was met with hostility when he returned to the country of his birth. 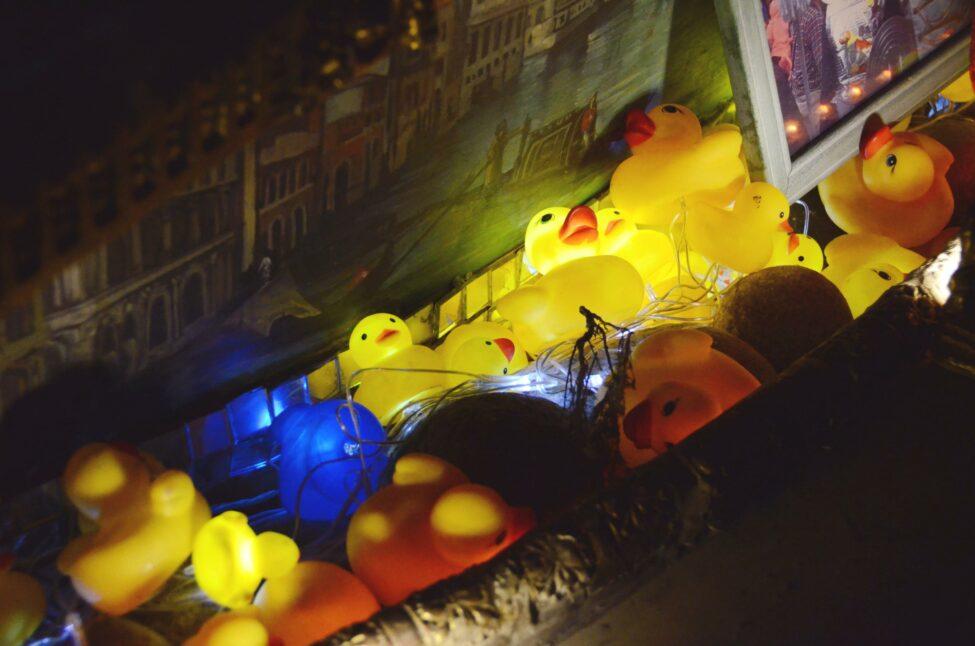 While performing in Philadelphia, he was attacked and beaten up by a group of thugs so badly that it left him hospitalized. But that didn’t stop him. He quickly picked himself up, dusted himself off and went back to his stage—back onto the streets, with the people, where he belongs. Bassi moved to Madrid in the depths of Spain’s most recent financial crisis, and it was then, in 2012, that the duck priest came to life.

Back inside the Duck Church, worshippers are sitting comfortably, ready for the most eccentric and unholy of masses to begin. Leo Bassi blesses his millennial audience with a toilet brush and splashes them with unholy water. Disco beats, tasseled shoulder pads, and magical absurdity fill the tiny church with laughter and applause. True to the spirit of the neighborhood, the mood begins to shift. A sermon covering a range of controversial themes—many of which would be utterly taboo in a Catholic church—takes center stage. Freedom of expression is everything to Leo Bassi, who’s not afraid to discuss the raw and gritty events unfolding around us. 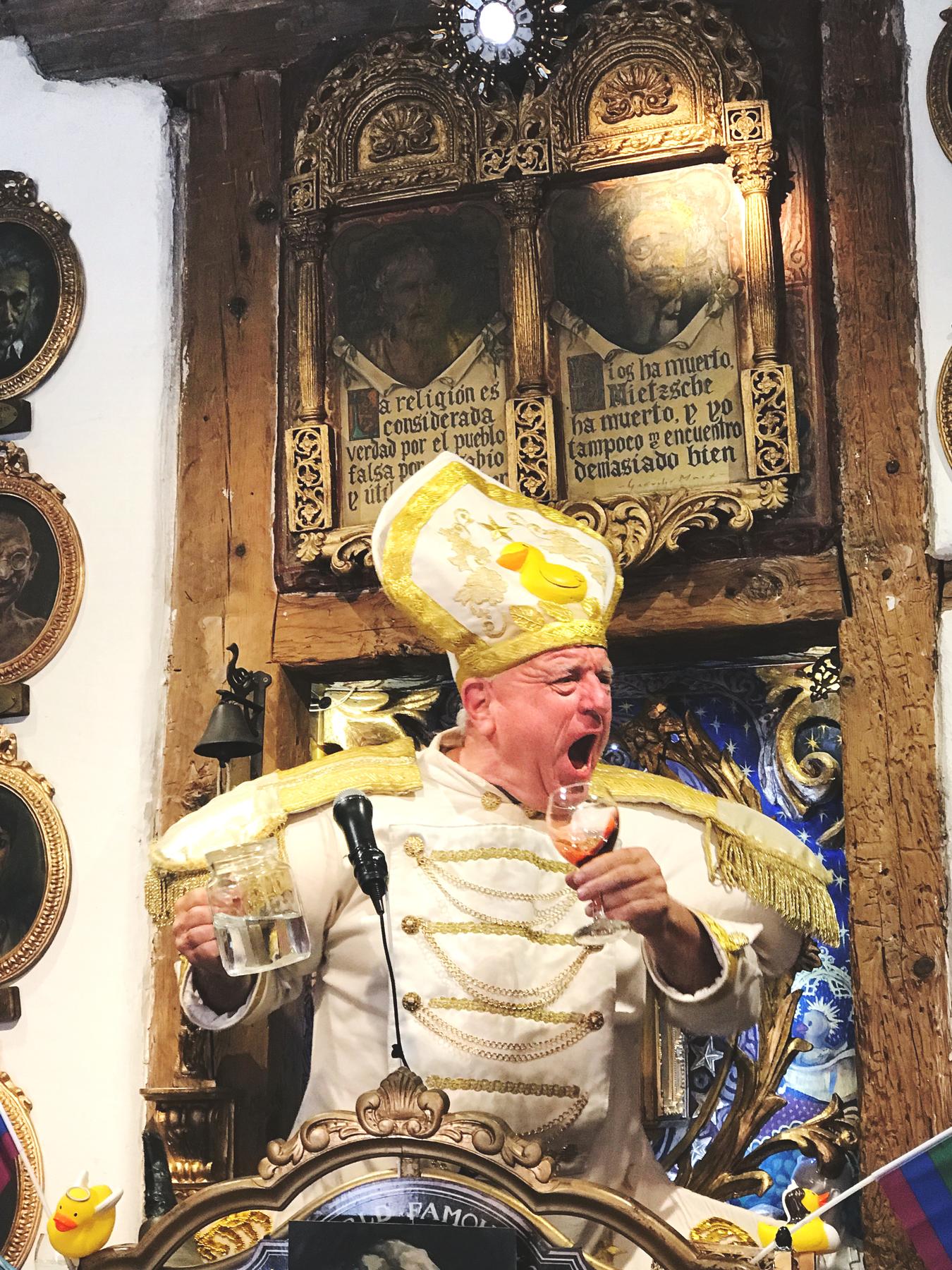 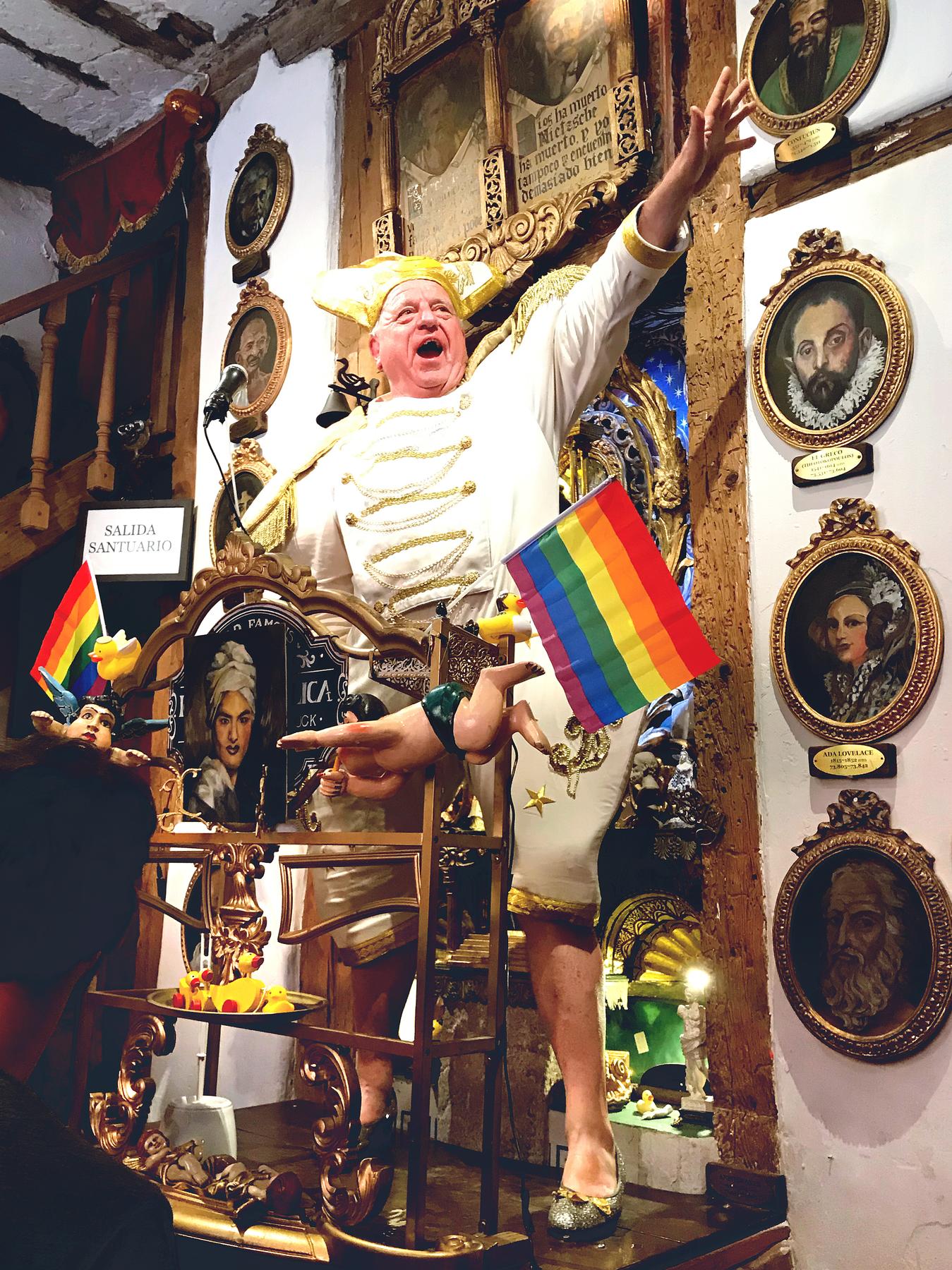 Leo Bassi gives his congregation not only spiritual guidance but also a chance to escape reality by plunging themselves into a fantastical yellow-rubber world. Going deeper inside the church, would-be worshippers find themselves inside a movie theater, surrounded by portraits of philosophers, scientists, and glowing rubber ducklings. Music begins playing and five short films of Leo’s grandfather start rolling. Recorded by the Lumière brothers over 120 years ago, these films of Georgio Bassi performing classical circus tricks, including juggling with his feet, are the first ever footage of clowns in history. The shorts are magical, haunting, and melancholic and can’t be seen anywhere else in the world.

In just seven years, Leo Bassi and his Duck Church have become local treasures, and even though every single duck mass is packed to the rafters, Leo refuses to charge an entrance fee. The Duck Church is his passion, and he does it for the people. Bassi does accept donations, however, and also offers pet-to-pet wedding services, baptisms for the elderly, and divorces.

To bring the duck mass to a close, Leo Bassi performs the best magic trick of all: turning water into wine. Proclaiming this “the only useful thing Jesus ever did,” he proceeds to down it in one. 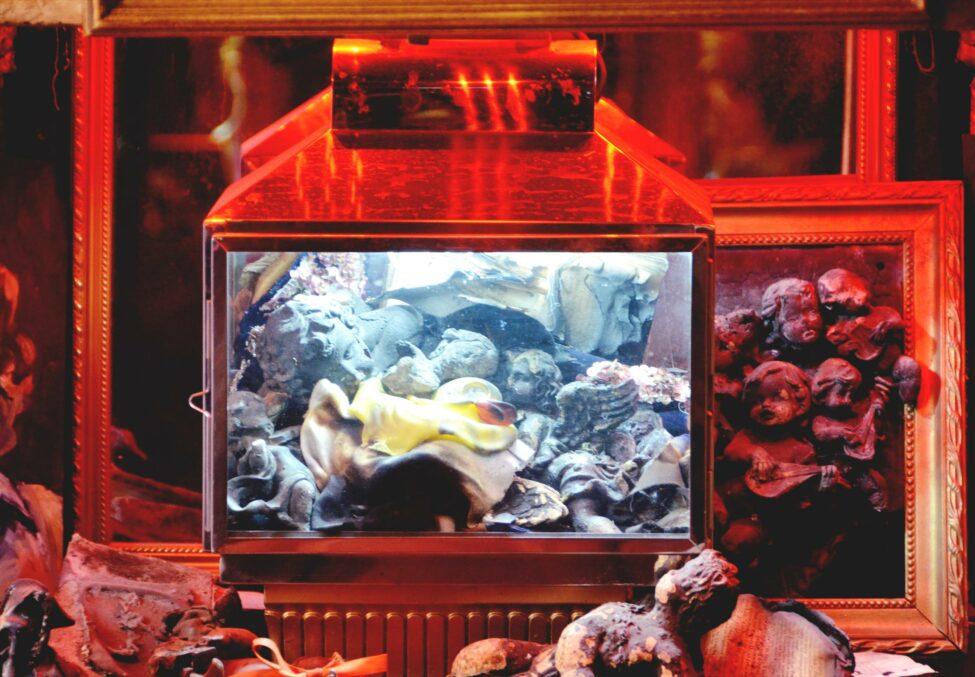