Is it safe to visit this self-governing island?

“Please don’t catch the coronavirus and bring it back, Mom,” my teenage daughter implored me before I left for the airport.

Ominously, as soon as I set my carry-on bag down inside Taoyuan International Airport in Taipei, I was handed a face mask. Three words were stenciled on the bottom right-hand side of the pastel-green fabric: “Made in Taiwan.”

“Don’t worry, Lisa. It is safe here. This is just a precaution,” said Vincent Lu, my guide on the ground in Taiwan, where I’d flown from Vancouver for the annual Taiwan Lantern Festival that marks the end of the Lunar New Year.

I’m not one to panic about getting sick overseas. I understand that travel can expose tourists to new germs or endemic diseases such as malaria. On past trips, I’ve picked up intestinal bugs in Mexico and Morocco, suffered through a bout of dysentery in Southeast Asia, and succumbed to food poisoning after eating an undercooked pancake in India. But with the news cycle incessantly hammering home the threat of the new virus, I was skittish about venturing so close to the outbreak’s epicenter—even though 586 miles and the Taiwan Straight separated me from Wuhan.

Beijing considers the island part of One-China, whereas Taiwan goes about its business like a self-governing democratic state. It has its own elected president, a military, passports (Republic of China – Taiwan), airline (EVA Air), and national health care system. Only a handful of countries recognize Taiwan and, as a consequence, don’t have relations with Beijing (many countries that don’t recognize Taiwan still do business with it, including the United States and Canada). Taiwan exists in a weird international limbo that seems to work until a virus outbreak in its behemoth backyard threatens to derail health and tourism.

China’s claims over Taiwan have blocked it from membership in UN agencies such as the World Health Organization (WHO) and the International Civil Aviation Organization (ICAO). As a result, it’s gotten lumped in with China during the coronavirus epidemic, with the WHO inflating the disease risk and number of coronavirus cases on the island (there were 31 confirmed cases and one death as of Feb. 25 compared with over 80,000 infections and more than 2,500 deaths on the mainland).

I put on the face mask regardless, just to be safe. When in Asia, I thought. 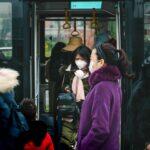 RELATED STORY
Should You Change Your Travel Plans Due to the Coronavirus?

It soon became apparent that coronavirus prevention and preparedness in Taiwan is decidedly next-level. Not only were locals sporting the surgical-intern look as they walked to work or bought coffee at Starbucks, their children—off from school during an extended Lunar New Year holiday—were fitted with mini masks that they miraculously never fidgeted with (my son would’ve thrown a fit).

“It’s pretty normal for Taiwanese to wear masks, even before the virus outbreak,” said Lucy Chang, a local guide with My Taiwan Tour. “Most people in restaurants wear masks anyway, and people who ride scooters. Just way more people wear them now.”

When I checked in to our hotel in downtown Taipei, I passed through a hand sanitizer station and a hotel greeter measured my temperature with one of those no-touch forehead thermometers.

“If your body temperature reaches 37.5 C (99.5 F) and above, we strongly suggest that you visit a hospital or clinic right away,” read a sign in the lobby.

It felt like a scene from Contagion or Outbreak—suppose the thermometer showed a slight fever, would someone in a hazmat suit appear and whisk me into isolation? To make matters worse, news soon spread that a week prior, passengers from the quarantined Diamond Princess cruise ship had visited a number of Taipei attractions, including the Chiang Kai-shek memorial and Taipei 101 (both on my itinerary), during a stop in the port of Keelung City.

But as the days went by, each encounter with a local—from friendly sales staff at gift shops to a fellow tourist at a breakfast buffet who showed me how to assemble a proper Taiwanese breakfast—left me feeling welcome and safe. The streets were spotlessly clean, too, and I never saw or heard anyone cough or sneeze. It occurred to me that any who were unwell may have been considerate and self-quarantined rather than expose others to their illness. And perhaps it’s a psychological placebo, but the sight of smiling and bowing servers wearing face masks gave me the courage to dig in to pretty much any dish except stir-fried snake. My confidence was also due to a numbers game: when I was in Taiwan there were only about 16 confirmed cases of coronavirus in a nation of 23 million—fewer cases than Japan, Thailand, or South Korea.

The government was also working to keep the virus out. By the time I left Taiwan, most flights between the island and China had been suspended, and the Taiwan government had banned entry to Chinese visitors and foreigners with a recent history of travel to China. More recently, state-run companies have doubled face mask production and the government has implemented a nation-wide purchase system to cope with demand.

At the launch of the Taiwan Lantern Festival in Taichung, the country’s biggest annual festival and tourist attraction, there was concern that panic over the coronavirus would keep people at home during the 16-day event. To put the public at ease, there were multiple hand gel stations and face masks were encouraged.

So I rubbed more sanitizer onto my dry, chapped hands and headed into a sea of face-mask wearing locals to wander past lanterns strung like illuminated buoys in the shape of cartoon mice, a baobab tree, a giant insect, birds taking flight. I’d long since ditched my single-use makeup smudger (a.k.a. mask)—it felt suffocating and only served to remind me that I should brush my teeth after eating gua bao, a braised pork “hamburger” served inside a steam bun with crushed peanuts and pickled greens. Besides, I liked to think the concept of herd immunity applied—if everyone else was wearing a mask, I’d be safe, right?

During the remainder of the trip, I visited the National Palace Museum to see the impressive collection of Chinese art and treasures that Chiang Kai-shek brought with him from China and explored night markets to sample smelly but yummy “stinky tofu” (I’m pretty sure the vendor was only wearing a mask because of his product’s pig-farm odor). On my last day in Taiwan, I got out of the city to spend time in Yangmingshan National Park.

It was here, hiking up Mt. Qixing, that all thought of coronavirus disappeared. Taiwanese families were out in large numbers and, surrounded by fresh air, they’d left the face masks at home. At the summit, an elderly man shared his fresh guava and tomatoes with us. I chatted with a teenager and her mom, who was sporting a Vancouver sweatshirt, and they were both thrilled I was visiting their country. I was, too.

Fear is an effective barrier to travel, and always has been, I realized. I’m glad I pushed my worries aside, let common sense prevail, and boarded the plane to Taipei.