Joyeux Noël, Y’all: Christmas in New Orleans Is Like No Other Place in the World 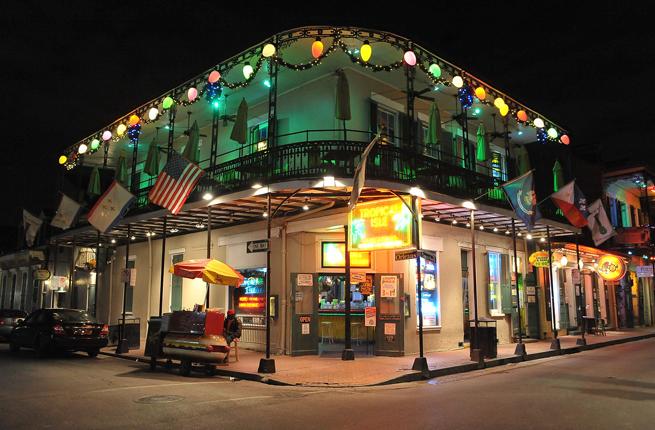 The cultural uniqueness of southern Louisiana is evident in the ways people celebrate: even today, holidays and festivals once rooted in Catholicism carry on rituals and traditions from French, Spanish, German, and Afro-Caribbean influences. In New Orleans and the surrounding area, centuries-old folklore and history color the holiday festivities celebrated today: blazing bonfires along the Mississippi River on Christmas Eve, the rich Revellion feasts, and the sugary outpour of king cakes to ring in the Carnival season.

Where: New Orleans, Lafayette, and The Great River Road 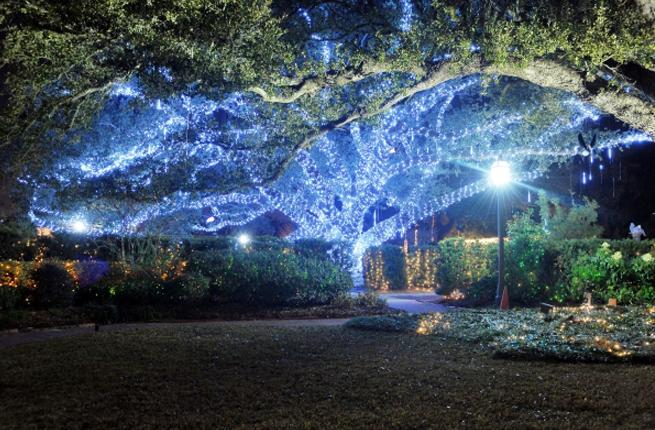 Cajun culture is a rich melting pot of influences, where the European ways of early French-Canadian settlers mix with the lifestyle that developed around the wild landscape where these roots were planted. Today, “Cajun Country” refers to areas north and west of New Orleans, where Acadian descendants have congregated in the small cities and towns lining the spidery bayous and levees, River Road, and the area between New Orleans and Baton Rouge.

The Cajun “Papa Noël” (a version of the French “Père Noël”) and the Christmas folklore surrounding him began in the stories told in Cajun homes to reflect the unique way of life in these small wetland communities. A sleigh, for example, couldn’t possibly travel through the dense swamp, and the image of reindeer would mean nothing to Cajun children. Hence, Papa Noël visits Cajun homes in a pirogue (a shallow-water canoe) pulled by a team of magic alligators.

Today, it’s worth taking a stroll through New Orleans City Park during Celebration in the Oaks—one of the biggest holiday light shows in the country—if only for the section they’ve dedicated to a telling of Cajun Night Before Christmas, a Cajun dialect version of the classic Christmas poem, replete with regional Christmas folklore. A heavily accented narrator reads the poem over loudspeakers, while animated light figures play out the story of Cajun Santa and his alligators’ trip through the swamp and up a cabin rooftop (the alligators crawl).

A visit to Cajun Country around the holidays involves the best food, music, and decorations the region has to offer: visit Lafayette’s Noël Acadien au Village or follow Louisiana’s Holiday Trail of Lights.

Insider Tip: To visit New Orleans around the holidays and engage in all the splendor, book some of the city’s best hotels using a “Papa Noël” rate: the discounted list includes such Fodor’s recommended hotels as Hotel Monteleone, Ritz Carlton, Sheraton, and The Westin New Orleans. 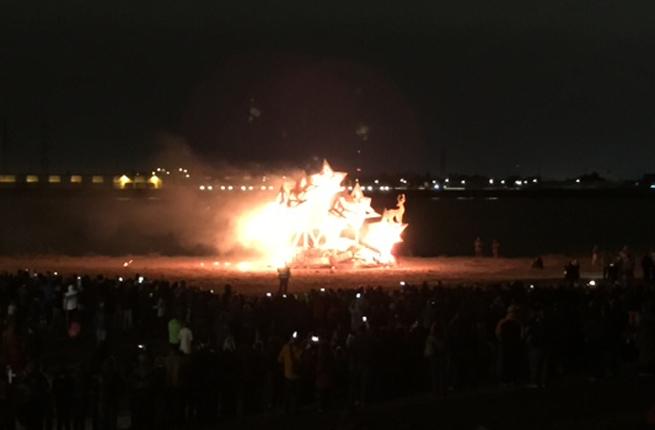 The most visually stunning Cajun Christmas tradition still in practice is, without a doubt, the lighting of bonfires along the levees and Mississippi River on Christmas Eve.

While most believe the tradition originated very early on with French and German settlers of the area, there’s some dispute over who the bonfires were originally meant to light the way for: some believe the giant, cone-shaped pyres were originally lit along waterways to help families guide their boats to area churches for midnight Mass through the thick fog common during the winter months. Others believe the bonfires symbolically lit the way for Papa Noël, so he could find his way to homes through the same fog. Whether one or both origin stories are true, Cajun families still build the pyres each year, and thousands of people gather to watch them burn.

The tradition of Christmas Eve bonfires is held up today, often modernized and even expanded. In recent years, bonfire design has become more creative: alongside the traditional towering pyres, you’ll see holiday-themed sculptures, trucks, trains, and even Saints memorabilia—all beautiful when set ablaze. The biggest celebration is in St. James Parish and the surrounding communities along the river, where the glowing row made by hundreds of bonfires is simply spectacular. Onlookers can drive the 30 minutes out of New Orleans, or even book a 6-hour Christmas Eve Bonfire Adventure Tour. Recently, bonfire celebrations have also expanded to earlier dates in December.

If you plan on staying in New Orleans proper, there is currently only one bonfire lighting in Orleans Parish. It takes place across the river in Algiers Point in early December, accompanied by a small festival with food trucks and music. If you don’t feel like making the ferry ride, there are views of the Algiers Point bonfires from the riverwalk in the Central Business District. 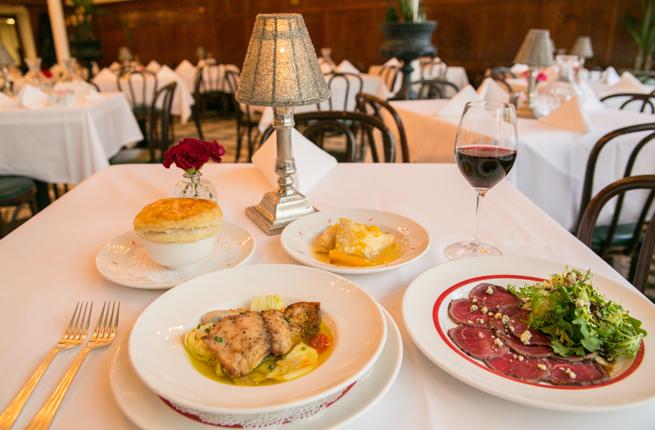 Reveillon (from the French word for “awakening”) is a Creole dining tradition from a New Orleans of days past when the city was almost entirely Catholic. Nineteenth-century New Orleanians prepared an elaborate feast for eating after midnight Mass on Christmas Eve, since Catholics were supposed to fast until Mass was over. The traditional Reveillon foods were dishes that could be left to simmer while the family was at Mass, like grillades, stews, and puddings; and rich, decadent dishes featuring duck, veal, and shellfish.

The custom mostly died out by the mid-20th century, when American Christmas traditions—such as rising early on Christmas morning—replaced European ones.

Today, Reveillon is less about church and more about the opportunity for a fantastic meal. If you hear the word in New Orleans, it usually refers to a special dinner offered at fine restaurants throughout the city around the holidays. You’ll find the city’s best eateries on the Reveillon list: Commander’s Palace, August, and Galatoire’s, to name a few. Restaurants serve elaborate, multicourse feasts at a fixed price. Some feature a “Reveillon Traditional,” replicating foods from 19th-century Creole culture, while other chefs take modern spins on the classics.

Insider Tip: Enjoying Reveillon is no longer restricted to Christmas Eve (or after midnight, of course), so don’t wait until the actual holiday to try a Reveillon dinner. Some of the best restaurants aren’t open on Christmas Eve anymore, and ones that are can be stressed with tourist traffic. Check out the complete list and book a special meal throughout December. 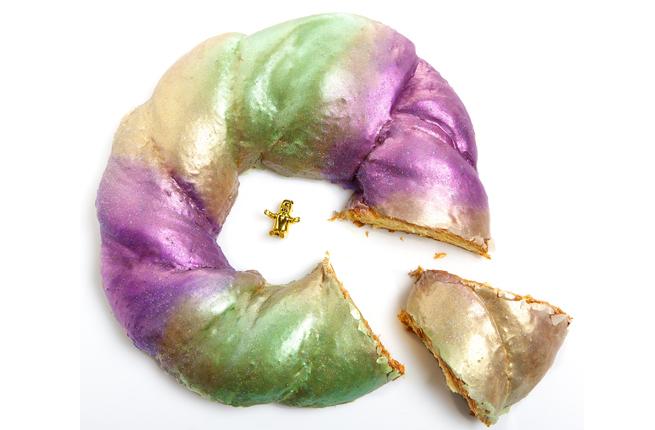 In New Orleans, king cakes are a communal treat brought to offices and parties. If you bite down on the hidden baby in your slice of cake, don’t forget: this means it’s your turn to buy the next one. Most of the city’s favorite bakeries—Manny Randazzo’s, Haydel’s Bakery, and Angelo Brocato’s—also deliver nationally.

King’s Day is the official start to Carnival season, and the first appearance of the cakes are also a reminder that, while for the rest of the country, the end of the winter holidays might be a time for rest and reflection, in January in Southern Louisiana, the celebration is only just beginning.