Revolution and resistance make up the fabric of the culturally spectacular Mexican state of Chiapas.

There are literally hundreds, maybe thousands, of speed bumps between the quaint colonial town of San Cristobal de las Casas and Palenque, the ancient Maya city on Chiapas’ northeastern edge. But this one at the entrance to Ocosingo is different.

Flanked by no fewer than six men wearing black balaclavas, this speed bump is actually a rope studded with angry metal spikes. This speed bump means business: Either stop or blow your tires in this town in the middle of the poorest state in Mexico. It’s not exactly a choice.

I’ve been waiting for this moment, waiting for the men in balaclavas. They’re part of a Chiapan legacy over a thousand years in the making—one in which the fiercely independent and diverse traditional indigenous communities of Chiapas, Mexico’s southernmost state, have been fighting for autonomy. In the mid-90s, tensions in the region boiled over into revolution. Led by the Zapatista Army of National Liberation, indigenous people from Zinacantán to Comitán rose up against the state in a bloody battle of guerilla warfare. The fighters were recognizable only by their balaclavas.

Twenty-five years on, the conflict is “frozen.” Fighting is rare, but no peace treaty was ever signed. Hostility towards the government and its capitalist objectives still simmers under the surface. For the first time while in Chiapas, my adrenaline starts pumping. We are a white, American couple in a rented car and this has the potential to go badly.

INSIDER TIPNever be a jerk to people wearing balaclavas.

I roll down my window as I pull the car to a stop and greet the men warmly in Spanish. They aren’t unkind. The first smiles beneath his mask and hands me a printed page. “Cincuenta pesos,” he tells me. I glance down at the sheet as my boyfriend digs out the cash. It tells of Zapatista loyalists arrested for their revolutionary ideology. This isn’t a tourist shakedown, it’s a low-tech crowdfunding method for paying the legal bills of Zapatista fighters and community leaders in their struggles for independence.

Chiapas and the Zapatistas are  relatively quiet now. In 2018, the state was even named the safest in Mexico by a citizen’s security watchdog organization. From its quaint colonial towns to its picturesque highland communities, Chiapas is one of the most ecologically and  ethnically diverse regions of the country–a quarter of the population is indigenous.

Like in the United States, indigenous communities in Mexico have been discriminated against and their lands have been exploited by the government since the arrival of the Spanish conquistadors in the early 16th century. By 1994, they’d finally had enough. When the mostly-indigenous Zapatista rebellion erupted over economic insecurity, the government’s illegal sale of communal lands, and the political persecution of local leaders, it kicked off with a violent take-over of several towns and cities, including Ocosingo. The Mexican army fought back against the uprising, not just in towns occupied by the Zapatistas, but in the jungle where many rebels were hiding out. In the first two weeks of the battle, around 300 people were killed. Skirmishes between the Zapatistas and the army continued until 1996, when a tentative cease-fire was signed.

After that, the battle mostly played out on paper with the Zapatistas attempting to secure autonomy for the state’s indigenous communities and the government resisting. But Chiapas remained tense. Demonstrations were met with excessive force, while leaders were imprisoned and sometimes killed. It was, apparently, common to see men and women in balaclavas carrying rifles in towns and in the countryside. 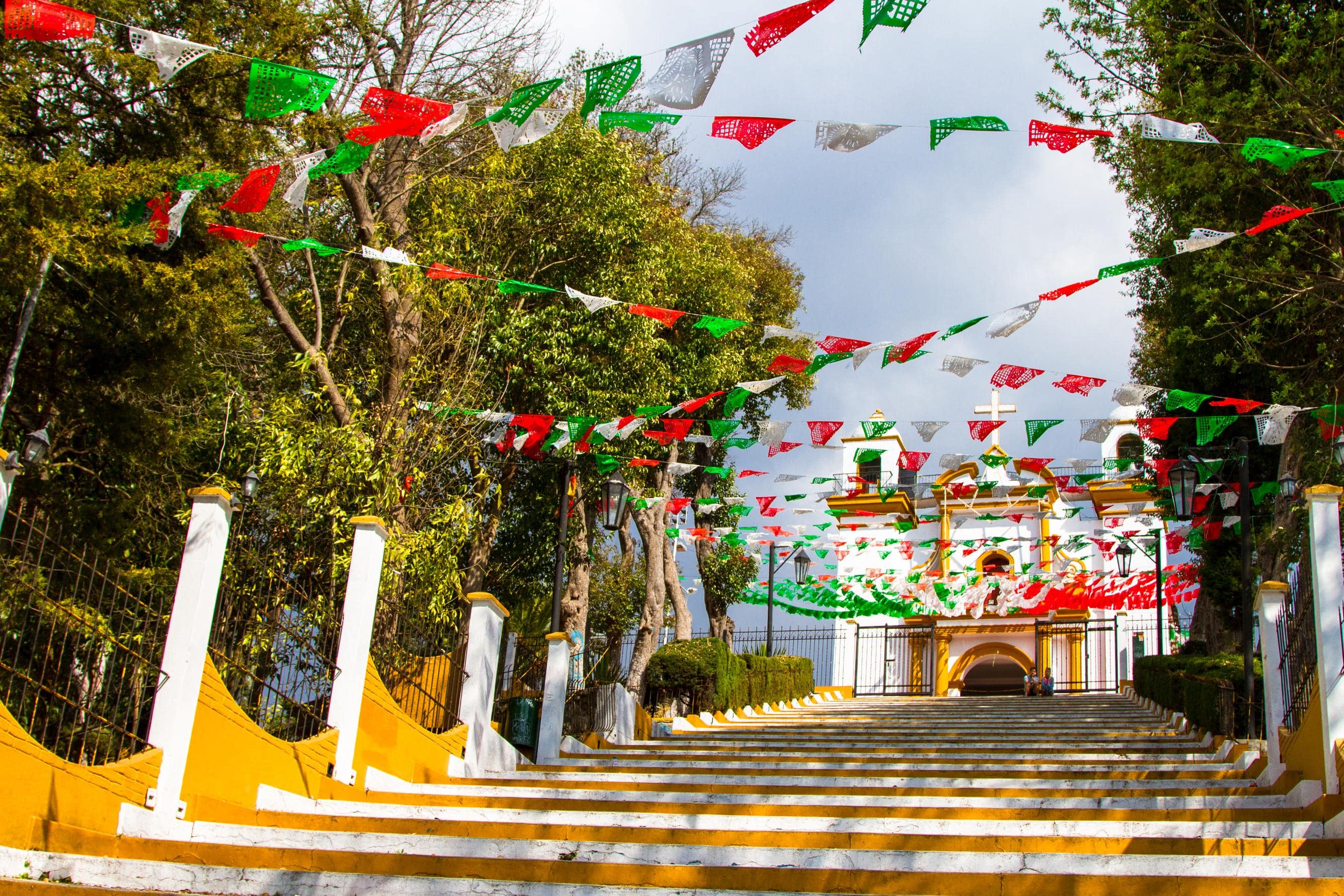 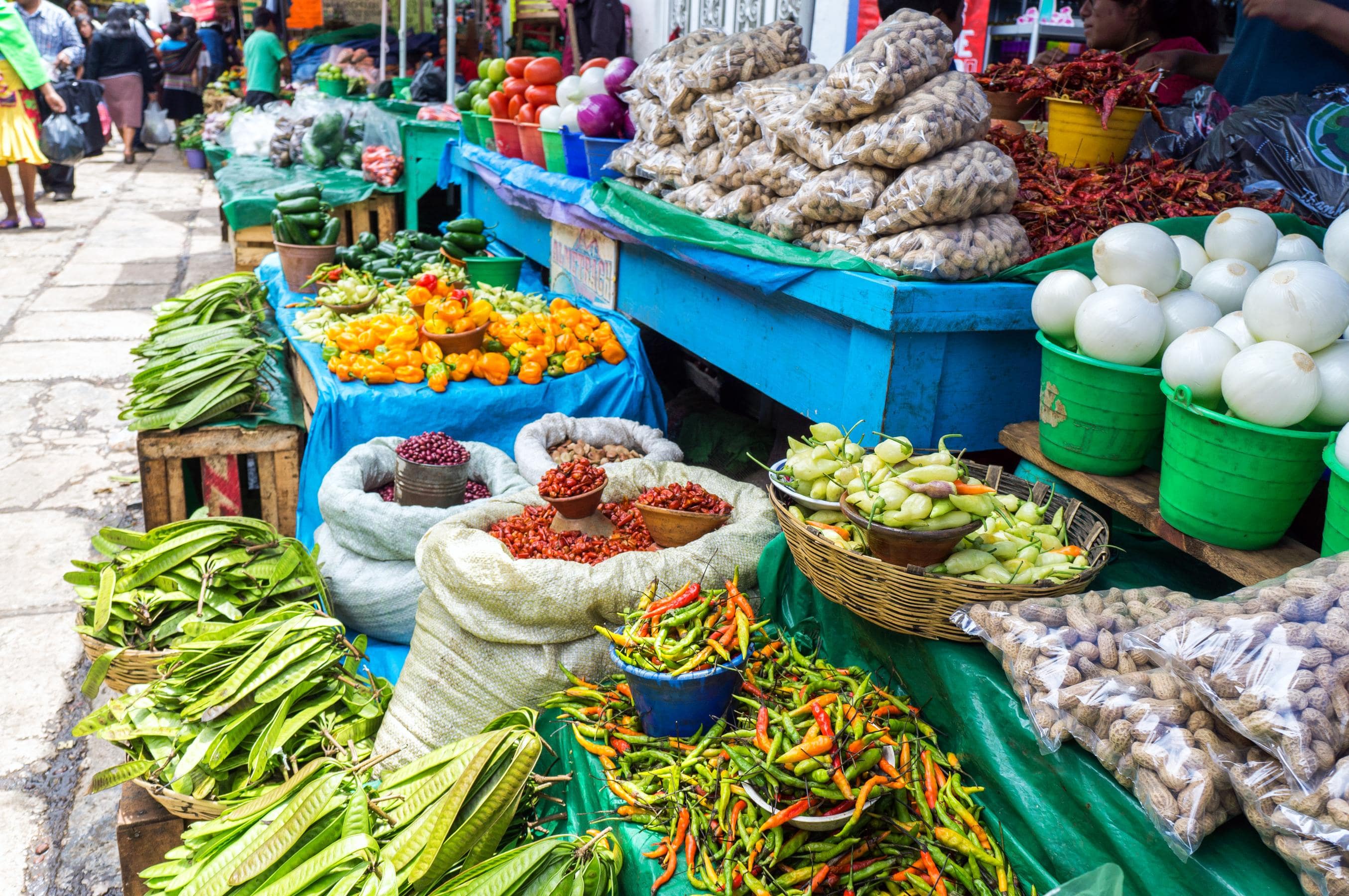 It’s not like that today. Today things are safe, especially for visitors. Your average tourist may not even notice symbols of the state’s revolutionary past. And while they loom large in Chiapas’ recent history, only around six percent of the state’s population (around 300,000 people in 55 municipalities) are associated with the Zapatistas, who are, these days, more focused on building a participatory democracy from the ground up than on creating armed resistance. Many indigenous people (and most non-indigenous) do not consider themselves Zapatistas. Some support the group and even benefit from the schools and health centers spearheaded by the Zapatistas, while others don’t. But every now and again, you run into signs that no peace agreement was ever signed–and that the Zapatistas still have a lot to fight for. You can call this a post-revolutionary state, but it wouldn’t really be true. The revolution isn’t over, it’s just quieter than it used to be.

San Cristobal de las Casas was at the center of the Zapatistas occupation in the 1990s and it’s where we begin our trip. Amidst the crumbling cathedrals and the colonial courtyards faced by red tile-roofed buildings, socialist street art in revolutionary tones is a reminder that the war isn’t yet won. At the TierrAdentro Cafe and Cultural Center, a Zapatista business on San Cristobal’s stylish pedestrian shopping street, an image of the Virgin, her face covered by a red scarf and her body crossed with bandoliers of ammunition, guards the entrance.

The most visible signs of revolution in the state of Chiapas, however, aren’t the guerilla imagery but the thriving expression of indigenous identity. Close to a third of the state’s population belongs to one of 12 indigenous ethnic groups and each community maintains its own language, style of dress, customs, and traditions. Today, the most resilient among them are the same communities that joined the Zapatista uprising two decades ago.

San Juan Chamula, in the fog-drenched highlands six miles north of San Cristobal, is one of the most independent of them all. Here, nearly 80,000 Tzotzil Maya people have successfully booted out all outside police and military. They govern themselves. Even Chamula’s cathedral plays by its own rules.

It’s a cool, wet morning when we park in a lot just outside the town’s core. It’s Sunday, market day, and the road down to the town center is flanked by vendors selling everything from electronics to clothing, including the rough sheep-wool tunics and skirts worn in cold weather. Just visible above the tarps strung over the market’s center is the town’s cathedral, shimmering white and turquoise in the fog.

Visitors are allowed inside the cathedral for a small fee and the smell of incense billows from the entrance. There are no pews here, no priest, no singular altar. In the darkness, small family groups kneel in carpets of pine needles, heads bowed before dozens of candles burning freely on the floor. With each group, a curandero—a sort of medicine man—prays in Tzotzil, occasionally spilling out drops of clear liquid from an old plastic coke bottle as part of  religious rituals hundreds of years old.

INSIDER TIPThis corn-based alcohol has been used ceremonially for centuries and a version of it, Pox, only recently became available commercially at the Posheria in San Cristobal.

About an hour from San Cristobal, a different sort of ancient ritual takes place. It’s pure luck that we roll into the town of Chiapa de Corzo just as the Grand Fiesta of the Parachicos is getting underway. The celebration, though it began before the 18th century, takes many of its emblems from an 18th-century legend about a wealthy Spanish woman and a sick little boy. 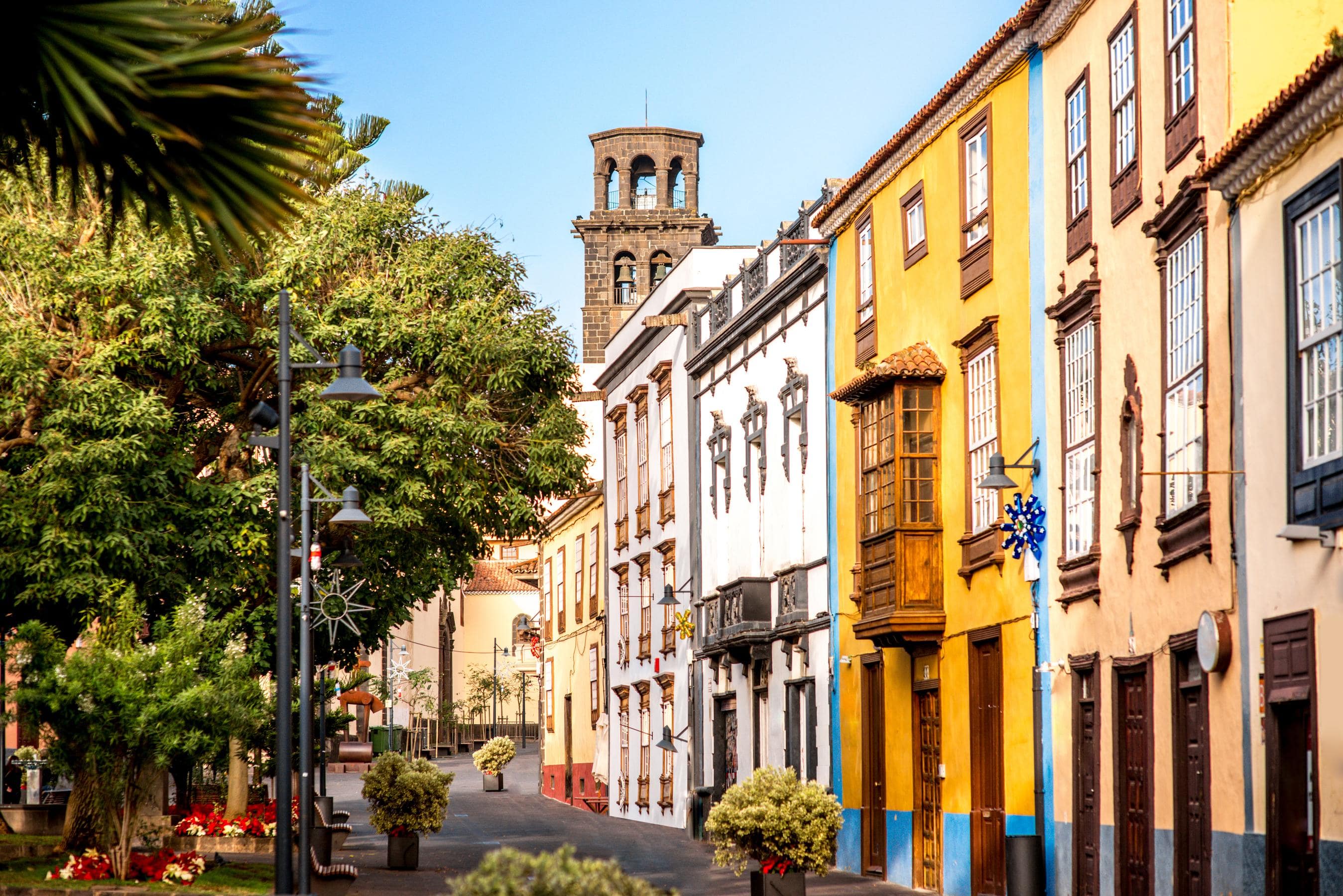 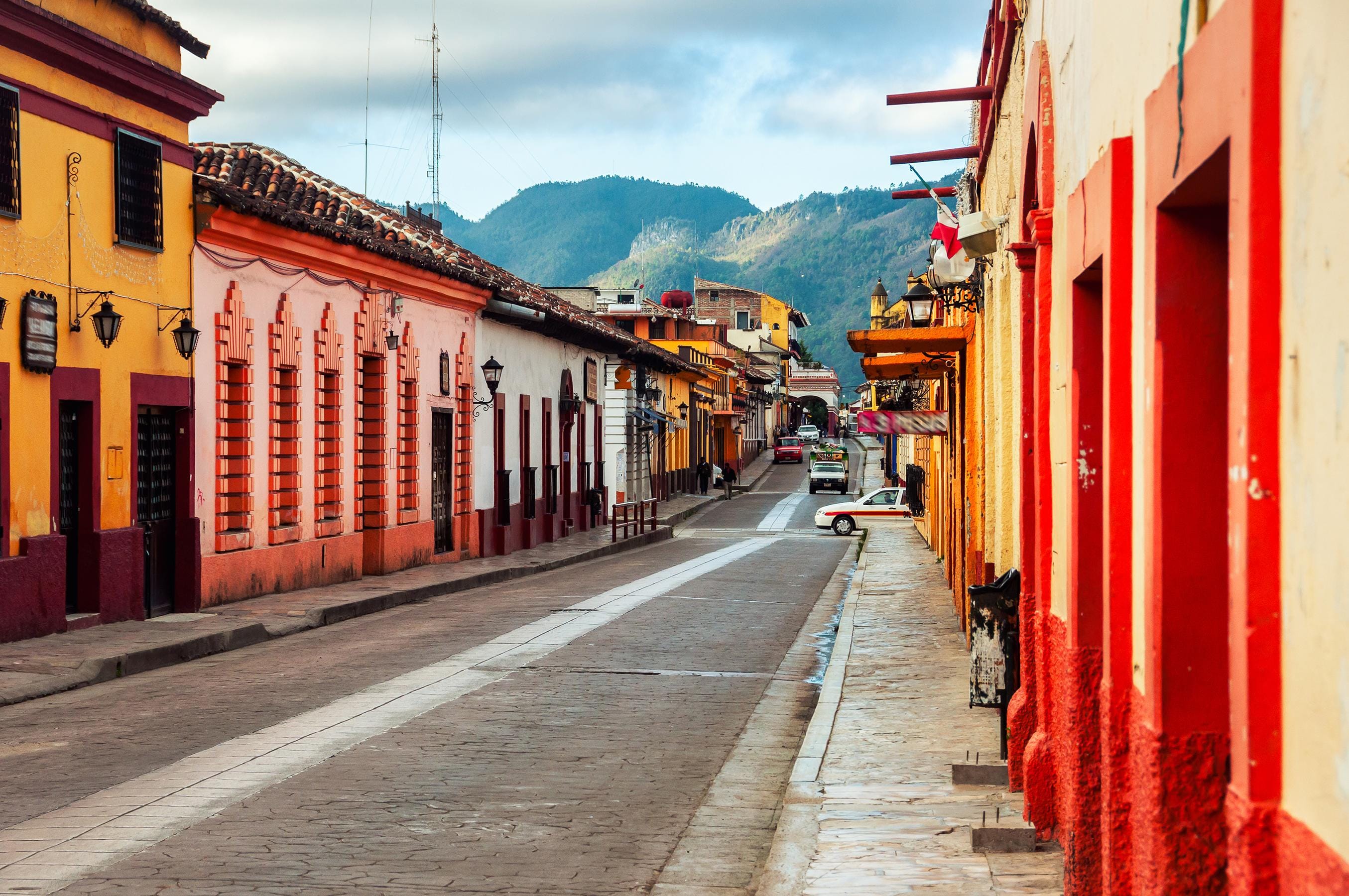 Climbing out of the car, we are almost immediately swept up in the parade of boys in stony-faced, blue-eyed “Caucasian” masks and young women in tiered dresses embroidered with bright flowers. Two giant puppets twirl and spin ahead of the crowd and every so often revelers peel off to join in impromptu dance parties hosted by local shops and restaurants. Tonight, and for the next eight days, in addition to dancing, religious rituals, and processions, there will be a carnival to end all carnivals with rides and live music in the town’s main square. The festival is so unique that it was declared Intangible Cultural Heritage by UNESCO in 2010.

The most revolutionary thing about Chiapas isn’t its armed rebellion, it is the cultural survival within its borders. And although the Zapatistas can’t take all the credit for the thriving indigenous-born traditions of Chiapa de Corzo, Chamula, and other communities, without the uprising, the state would likely look much different today. By preventing the sale of communal farm and forest lands to corporate interests, the Zapatista movement has also played a role in conserving the state’s biodiversity; there are thousands of plant and animal species found in the jungles of Chiapas that are not found anywhere else in the world.

INSIDER TIPKeep an eye out for the unique chapaya, a spiky, caterpillar-like palm with a meaty texture found in traditional lowland cuisine.

Those same jungles are home to a more famous indigenous history, just as old as the communities of the highlands, but perhaps more dramatic. On the long, slow drive east from Ocosingo, we see fewer and fewer women in woven traje (costume) and more and more road stands selling tourist kitsch even though, as far as we can tell, we’re the only foreign tourists attempting to drive this rutted, pot-holed, speed-bump covered road. The air changes from fresh and cool to muggy and oppressive.

The ancient ruins of Palenque are just a couple of miles from the loud, bustling and hot modern town of the same name. Regardless of what the textbooks say, the ancient ruins of Palenque never were abandoned. Even after Palenque lost its power and most of its wealth and population, Ch’ol Maya descendants used the site’s towering stone temples and imposing palaces (as well as nearby features on the landscape such as Jolja’ Cave) for religious ceremonies. Exploring these ancient structures, climbing their steep stone steps, and peering into their tiny rooms reveals a sort of dynamic, cyclical continuity. Autonomy, the right to self-governance, and prosperity that once fueled the royal dynasty at Palenque is the same objective driving more than 300,000 Zapatistas in 55 separate municipalities throughout the state. So it was more than a thousand years ago, so it will be in a thousand more.

Headed back towards Tuxtla Guitierrez and the airport on our final day in Chiapas, we take the well-maintained, nearly empty toll road out of Palenque.

There’s no one in the last toll booth as we come around the bend towards Tuxtla. Not sure what to do, we sit for a moment, wondering if it’s okay to drive on or if we should wait. We’ve just decided to step on the gas when a balaclava-clad man comes careening around the corner. He stops at my window, ducks his masked face and holds out his hand: “Cincuenta pesos.”