What will tourism do to my community?

Gray spoil heaps toward either side of me as I drive downhill into Blaenau Ffestiniog, a former mining town within the Eryri National Park. On my right lies an even more iconic sight: the flash of scarlet, COFIWCH DRYWERYN slapped haphazardly in white. Remember Tryweryn.

I had mixed feelings when I learned that Wales had been successful in its bid for UNESCO World Heritage Status. The accolade, the country’s fourth, celebrates the slate landscape of northwest Wales and the contribution of quarrymen to the industrial revolution. On the one hand, I’m thrilled the rest of the world will see my homeland for all its damaged beauty.

Wales became the first English territory way back in the 13th century, before being officially incorporated into the kingdom by Henry VIII in the 16th century. While the native name for our land, Cymru, refers to “friends” or “fellow countrymen,” Wales derives from an Anglo Saxon word meaning “foreigners” or “outsiders.”

Cymru may be a country in its own right, but I’m still considered a British citizen. Every time I’m forced to select “United Kingdom” as my home country, I’m stripped of my Welsh identity while another is thrust upon me.

Luckily, UK Prime Minister Boris Johnson’s shambolic handling of the pandemic turbocharged support for Welsh independence, with one 2021 poll putting the number at 39%.

As city-dwellers across the UK realized they could work from the comfort of their own homes, sights were set on the isolation, wild landscapes, and comparable affordability of Wales —sending property values soaring by an average 11%, the highest in the UK.

This is having a catastrophic effect on young people like me, who are priced out of the communities they grew up in.

But before you insist that this is a global issue, let me tell you about the Welsh language.

In 1536, English was named the only legal language of Wales.

In 1870, the Education Act stated children must be taught in English only.

Between the 18th and early 20th centuries, schoolchildren caught speaking the Welsh language were forced to wear the Welsh Not, a wooden plaque shaming anyone caught speaking their country’s native tongue. The child found wearing the plaque at the end of the day was physically punished.

In 1965, the Welsh-speaking village of Capel Celyn was drowned to provide England with drinking water despite vehement opposition from villagers and Welsh MPs. The story is even highlighted in an Archer episode titled Achub y Morfilod.

We had to fight for Welsh road signs, television, and education. Today, Wales is officially recognized as a bilingual country.

Nevertheless, respect for the language remains scant. Centuries of history are being erased as traditional place names are Anglicised by careless tourists, who view my homeland as their lockdown hideout. With the border into Wales wide open this summer, I was scrolling photos on social media when I came across a spot known to me as Ynys Llanddwyn, or Llanddwyn Island. Named after Dwynwen, patron saint of lovers, it had been tagged “Lovers’ Island.” When questioned by locals the poster dubbed their version “more poetic.”

Even historic property names have fallen victim. One particularly offensive example is that of Fferm Tan y Mynydd, which describes a farm at the foot of a mountain. Today its name is Forget Me Not Cottage.

But can we even blame the incomers, when politicians in the House of Commons refer to Welsh as a “foreign language”? When the London-centric British media questions whether Welsh is the world’s most “pointless’ language”? When even an English boss within our National Health Service compares the treatment of non-Welsh speakers to that of Black people during South African apartheid?

And we’re expected to be grateful. Instead of following the British government’s lead—at last count, the UK death rate exceeded 161,000—Wales exercised its devolved status by deviating from the Prime Minister’s plans. I was at the pub during summer 2020, safe in the knowledge that the border between Wales and England remained closed to protect us from the influx of city-dwellers. A chatty retiree took the opportunity to chuckle how he’d flouted the law to visit his holiday home, “Because I didn’t want your economy to collapse!”

This spring there was a call for park authorities to refer to its tallest peak by its native name Yr Wyddfa. Attitudes ranged from defiance—”Well it will always be SNOWDON to me!!!”—to faux concern, because however will visitors FIND this behemoth without English signage? Our tourism industry would surely collapse–you know, just like Australia’s did when Ayers Rock was reclaimed by its rightful name Uluru.

Sure, our villages thrive as the hordes descend each summer. But when the holiday homes once again sit empty, communities are reduced to ghost towns while tourists contribute nothing to the economy. Figures by the Welsh Revenue Authority for 2019-2020 show that almost 40% of properties in my home county of Gwynedd were sold as second homes, the highest in Wales. 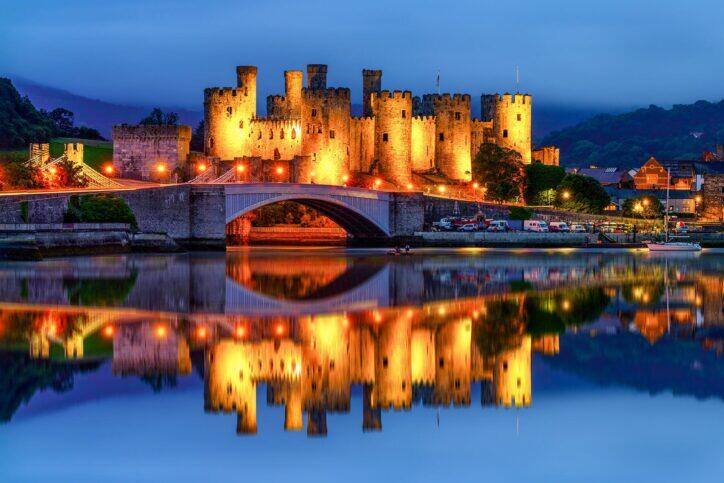 This summer myself and thousands of others rallied in protest on the banks of the Tryweryn dam, just meters from the flooded village of Capel Celyn. Wales is not something “hidden” for Londoners to discover and discard. It is our home.

One of the most coveted second home destinations is the peninsula village of Abersoch, where even a dilapidated beach hut can set you back £153,000. Around 40% of Abersoch’s homes are second homes, with properties routinely selling for seven figures.

But in a county where the median gross weekly income was just £479 in 2020, the average person has little chance of ever owning a home in the community they grew up in.

Abersoch is home to so few young permanent residents that its Welsh-language primary school—which as of the last academic year taught just eight full-time students—is being forced to close.

I’m terrified by what tourism is doing to my community. Wales is cawl. Wales is living just a hop, skip and, a jump from the beach. Wales is knowing the business of everyone in the village. I am truly proud of our UNESCO World Heritage Status, but will this accolade only exacerbate the housing crisis?

My only hope is that it will attract a higher quality of tourist, a tourist who cherishes culture and is willing to give back more than it takes.