This year marks the 150th anniversary of the first woman to climb the Matterhorn.

Many great female rivalries throughout history inspire, motivate, and encourage women to push themselves harder and further in their aspirations. One of those rivalries, and perhaps one of the most important in female sporting history and gender recognition, is the one between American socialite and mountaineer Meta Brevoort and British Alpinist, Lucy Walker, competing to be the first female to successfully climb a 4,000-meter (14,692-foot) summit–a feat terrifying difficult for even the fittest athlete looking to conquer one of God’s natural wonders. Especially back in the days when cable cars did not exist and women were chained to wearing skirts.

Despite having to live up to social conformities and gender-designated duties of the 19th century, Walker was not easily tamed, setting out to conquer fearsome summits in a skirt, surrounded by men and living with barn animals in mountain huts. But not without a survival pack of champagne and sweets, of course.

Considered a jewel in the crown of female mountaineering, Walker did all her expeditions in style. She was not boastful and, in fact, wrote nothing about her climbing. She was, however, known to have one vice: she loved champagne. According to alpinist historians, Walker would get through several bottles of champagne during an expedition, hydrating on bottles of sparkling bubbles to fuel her further and push herself harder. Gotta love her style.

With the Matterhorn on the Swiss-Italian border, her drink of choice was the Italian sparkling wine, Asti Spumonte, which she drank liberally and complemented with sponge fingers for sustenance rather than protein bars.

Scandalizing and intoxicating Victorian society was perhaps in Walker’s blood and to salute Lucy Walker on her 150th anniversary this year (obviously with her drink of choice), many women are now embarking on their own personal adventures to conquer a 4,000-meter summit in Switzerland. 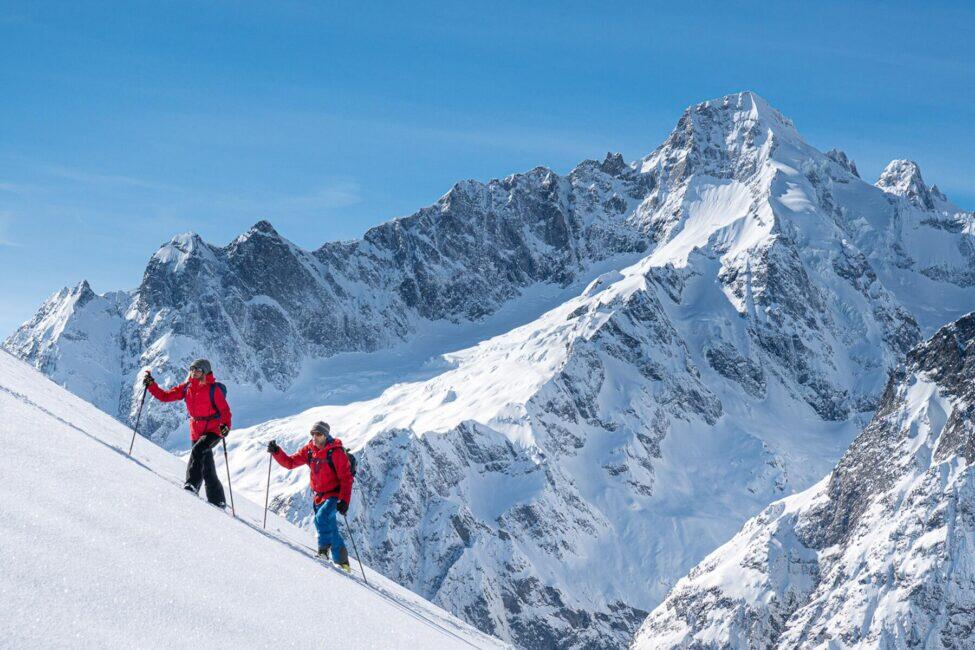 In the History Books

On July 21, 1871, Lucy Walker became the first woman to summit the Matterhorn, which left her rivalries and skeptics in the proverbial (powdery) dust. There were many reasons why the Victorian alpinist Lucy Walker seemed an unlikely candidate to conquer the Matterhorn. Not only was it the most difficult climb yet achieved in the world at the time but, six years earlier, four men from the first expedition to stand on top of this hefty 4,478 meter (14,692-foot) pyramid perished on their descent.

But, for Walker, a 35-year-old Brit, gusty wind, cold weather, and social disapproval were not going to hold her back from what would be remembered as a historical moment for women around the world. Perhaps it was the champagne fueling her, but for many modern-day admirers, Walker was more than just a woman looking to rebel and break social rank.

According to Swiss-native and No Ladies, Please!–a play about Lucy Walker—playwright, Livia Anne Richard, very little has been documented about this sporting heroine.

“Neither people in England, Switzerland, nor the media in general wanted to really take note about her great success of being the first woman to climb the Matterhorn. Therefore, one finds practically no information about her in books or the internet,” says the award-winning playwright.

“At the time, people in Zermatt were in shock that a woman wanted to climb the mountains, especially the Matterhorn, and in a skirt!” adds Livia.

Alpinist historian, Clare Roche, agrees that very little has been documented about female mountaineers which limits how much we really know about them. In an interview with British Mountaineering Council (BMC), Roche has been trying to resurrect any forgotten histories and celebrate female achievements in mountaineering. “There have been many celebrated anniversaries of men’s first ascents but hardly any of women’s…something I am trying to correct,” told Roche.

Despite single figure percentages of women as mountain guides (approximately 2%, according to the Alpinist Council in the U.K.), more women are attempting summit climbs which, Roche believes, is because of Walker’s “iconoclastic actions” that ultimately broke the glass ceiling for women to follow.

Swiss-born Caroline George fell in love with the mountains at the age of 18 and has been mountaineering for more than 20 years. Despite a serious accident in 1997 which saw her fall more than 450 meters (1,476 feet) down a mountain on skis, her passion for mountain sports grew into an obsession. “I made a life out [of the mountains]: professionally and personally,” says the internationally certified IFMGA/UIAGM mountain guide.

She continues, “I competed in the ice climbing world cup, which was the start of building a community within the mountain world. This passion for the mountains and for ice climbing, in particular, has been the golden thread in my life and one I continue to pursue because it fuels my soul and feeds my energy.

“Female mountaineers are still few and far between in the mountains. The most representative fact is that only 1-2% of mountain guides in the world are female and when an all-female party travels through the mountains, it is still perceived as the exception rather than the norm. The fact that it is a male-dominated sport is based in the history of alpine valley,” says George. “This structure has now evolved and mountain activities are now accessible to all, and this is true for all mountain-related sports. The family structure has also changed but the mentality around women in the mountains has yet to adapt fully to this new reality.” 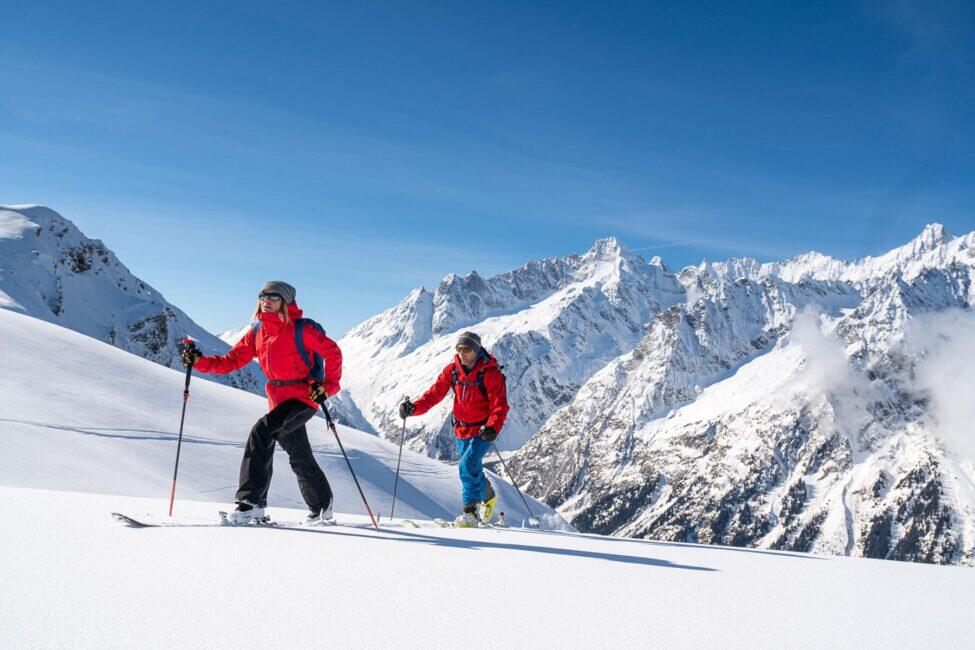 Cheers to You, Lucy

In her stellar 21-year career in the Alps, which started in 1858, Walker embarked on 98 expeditions including 28 successful attempts on 4,000-meter peaks. According to Mountaineering and Climbing Federation, UIAA there are just 82 peaks over this height. Walker also holds the first female ascent record on 16 summits, including Monte Rosa, the Strahlhorn, and the Grand Combin, as well as the Balmhorn which she completed in 1864 over any other sex.

To commemorate the 150th anniversary of Lucy Walker, Switzerland Tourism has launched a campaign, Peak Challenge, encouraging greater prominence for women in Switzerland in all industries, not just mountaineering. The challenge seems well overdue when considering that in Appenzeller, one of Switzerland’s 26 cantons (the member states of the Swiss Confederation), women were only granted voting rights in 1991. With summit selfies spreading across social media of women who have already climbed and conquered one of the 48 4,000-meter peaks in Switzerland, which include the highest peak in the Swiss Alps, Dufourspitze, the Eiger in the Bernese Alps, and of course Balmenhorn which Walker famously conquered, George hopes this will get more women out into the mountains but more importantly “feel empowered.”

“Platforms such as #peakchallenge will hopefully motivate more women to go climbing with a guide, maybe hire more female guides and maybe even motivate them to try to venture to the mountains on their own after gaining the required training and skills to do so,” says George.

She adds, “The mountain provides both a physical and psychological challenge that meets people at whatever level they are at: extreme alpinists will find challenges that meet their high-level needs and beginners can climb summits that will fulfill their goals. That is what the mountains are all about: personal fulfillment. I love the mountains because they provide me with the energy that I need to be a good person in this world.”