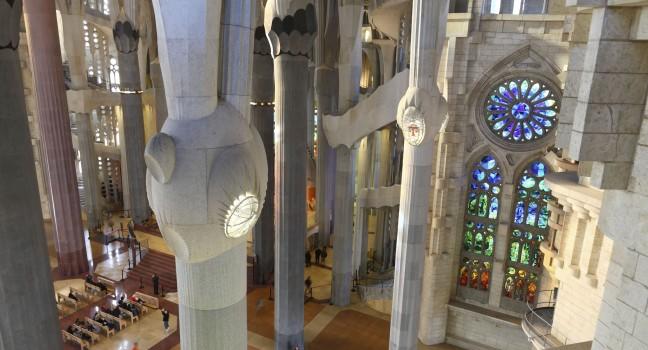 Barcelona's most emblematic architectural icon, Antoni Gaudí's Sagrada Família, is still under construction some 135 years after it was begun. This striking and surreal creation was conceived as nothing short of a Bible in stone, a gigantic representation of the entire history of Christianity, and it continues to cause responses from surprise to consternation to wonder. Plan to spend at least a few hours here to take it all in. However long your visit, it's a good idea to bring binoculars.

Looming over Barcelona like a magical mid-city massif of needles and peaks, the Sagrada Família can at first seem like piles of caves and grottoes heaped on a labyrinth of stalactites, stalagmites, and flora and fauna of every stripe and sort. The sheer immensity of the site and the energy flowing from it are staggering. The scale alone is daunting: the current lateral facades will one day be dwarfed by the main Glory facade and central spire—the Torre del Salvador (Tower of the Savior),... READ MORE

Barcelona's most emblematic architectural icon, Antoni Gaudí's Sagrada Família, is still under construction some 135 years after it was begun. This striking and surreal creation was conceived as nothing short of a Bible in stone, a gigantic representation of the entire history of Christianity, and it continues to cause responses from surprise to consternation to wonder. Plan to spend at least a few hours here to take it all in. However long your visit, it's a good idea to bring binoculars.

Looming over Barcelona like a magical mid-city massif of needles and peaks, the Sagrada Família can at first seem like piles of caves and grottoes heaped on a labyrinth of stalactites, stalagmites, and flora and fauna of every stripe and sort. The sheer immensity of the site and the energy flowing from it are staggering. The scale alone is daunting: the current lateral facades will one day be dwarfed by the main Glory facade and central spire—the Torre del Salvador (Tower of the Savior), which will be crowned by an illuminated polychrome ceramic cross and soar to a final height 1 yard shorter than Montjuïc (564 feet) guarding the entrance to the port (Gaudí felt it improper for the work of man to surpass that of God). You can take an elevator skyward to the top of the bell towers for some spectacular views (choose the "Top Views" ticket). Back on the ground, visit the museum, which displays Gaudí's scale models, photographs showing the progress of construction, and images of the vast outpouring at Gaudí's funeral; the architect is buried under the basilica, to the left of the altar in the crypt.

Soaring skyward in intricately detailed and twisted carvings and sculptures, part of the Nativity facade is made of stone from Montserrat, Barcelona's cherished mountain sanctuary and home of Catalonia's patron saint, La Moreneta, the Black Virgin of Montserrat. Gaudí himself was fond of comparing the Sagrada Família to the shapes of the sawtooth massif 50 km (30 miles) west of the city; a plaque in one of Montserrat's caverns reads "Lloc d'inspiració de Gaudí" ("Place of inspiration for Gaudí").

History of Construction and Design. "My client is not in a hurry," Gaudí was fond of replying to anyone curious about the timetable for the completion of his mammoth project. The Sagrada Família was begun in 1882 under architect Francesc Villar, passed on in 1891 to Gaudí (who worked on the project until his death in 1926). After the church's neo-Gothic beginnings, Gaudí added Art Nouveau touches to the crypt (the floral capitals) and in 1893 went on to begin the Nativity facade of a new and vastly ambitious project. At the time of his death in 1926, however, only one tower of the Nativity facade had been completed.

Gaudí's plans called for three immense facades, the Nativity and Passion facades on the northeast and southwest sides of the church, and the even larger Glory facade designed as the building's main entry, facing east over Carrer de Mallorca. The four bell towers over each facade would together represent the 12 apostles. The first bell tower, in honor of Barnabas and the only one Gaudí lived to see, was completed in 1921. Presently there are eight towers standing: Barnabas, Simon, Judas, and Matthias (from left to right) over the Nativity facade and James, Bartholomew, Thomas, and Phillip over the Passion facade. The four larger towers around the central Tower of the Savior will represent the evangelists Mark, Matthew, John, and Luke. Between the central tower and the reredos at the northwestern end of the nave will rise the 18th and second-highest tower, crowned with a star, in honor of the Virgin Mary. The naves are not supported by buttresses but by treelike helicoidal (spiraling) columns.

Meaning and Iconography. Reading the existing facades is a challenging course in Bible studies. The three doors on the Nativity facade are named for Charity in the center, Faith on the right, and Hope on the left. (Gaudí often described the symbolism of his work to visitors, but because he never wrote any of it down much of the interpretation owes to oral tradition.) In the Nativity facade Gaudí addresses nothing less than the fundamental mystery of Christianity: why does God the Creator become, through Jesus Christ, a mortal creature? The answer, as Gaudí explained it in stone, is that God did this to free man from the slavery of selfishness, symbolized by the iron fence around the serpent of evil at the base of the central column of the Portal of Charity. The column is covered with the genealogy of Christ going back to Abraham. Above the central column is a portrayal of the birth of Christ; above that, the Annunciation is flanked by a grotto-like arch of water. Overhead are the constellations in the Christmas sky at Bethlehem.

To the right, the Portal of Faith chronicles scenes of Christ's youth: Jesus preaching at the age of 13, and Zacharias prophetically writing the name of John. Higher up are grapes and wheat, symbols of the Eucharist, and a sculpture of a hand and an eye, symbols of divine providence.

The left-hand Portal of Hope begins at the bottom with flora and fauna from the Nile; the slaughter of the innocents; the flight of the Holy Family into Egypt; Joseph surrounded by his carpenter's tools, contemplating his son; and the marriage of Joseph and Mary. Above this is a sculpted boat with an anchor, representing the Church, piloted by St. Joseph assisted by the Holy Spirit in the form of a dove.

Gaudí planned these slender towers to house a system of tubular bells (still to be created and installed) capable of playing more complete and complex music than standard bell-ringing changes had previously been able to perform. At a height of one-third of the bell tower are the seated figures of the apostles.

The Passion facade on the Sagrada Família's southwestern side, over Carrer Sardenya and the Plaça de la Sagrada Família, is a dramatic contrast to the Nativity facade. In 1986, sculptor Josep Maria Subirachs was chosen by project director Jordi Bonet to finish the Passion facade. Subirachs was picked for his starkly realistic, almost geometrical sculptural style, which many visitors and devotees of Gaudí find gratingly off the mark. Subirachs pays double homage to the great Moderniste master in the Passion facade: Gaudí himself appears over the left side of the main entry, making notes or drawings, while the Roman soldiers farther out and above are modeled on Gaudí's helmeted warriors from the roof of La Pedrera. Art critic Robert Hughes calls the homage "sincere in the way that only the worst art can be: which is to say, utterly so."

Following an S-shape path across the Passion facade, the scenes represented begin at the lower left with the Last Supper. The faces of the disciples are contorted in confusion and dismay, especially that of Judas, clutching his bag of money behind his back. The next sculptural group to the right represents the prayer in the Garden of Gethsemane and Peter awakening, followed by the kiss of Judas.

In the center, Jesus is lashed to a pillar during his flagellation. Note the column's top stone is out of kilter, reminder of the stone soon to be removed from Christ's sepulcher. To the right of the door is a rooster, as well as Peter, who is lamenting his third denial of Christ: "ere the cock crows." Farther to the right are Pilate and Jesus with the crown of thorns, while just above, starting back to the left, Simon of Cyrene helps Jesus with the cross after his first fall.

Over the center is the representation of Jesus consoling the women of Jerusalem and a faceless St. Veronica (because her story is considered legendary, not historical fact), with the veil she gave Christ to wipe his face with on the way to Calvary. To the left is the likeness of Gaudí taking notes, and farther to the left is the equestrian figure of a centurion piercing the side of the church with his spear, the church representing the body of Christ. Above are the soldiers rolling dice for Christ's clothing and the naked, crucified Christ at the center. To to the right are Peter and Mary at the sepulcher. At Christ's feet is a figure with a furrowed brow, thought to be a self-portrait of Subirachs, characterized by the sculptor's giant hand and an "S" on his right arm.

Over the door will be the church's 16 prophets and patriarchs under the cross of salvation. Apostles James, Bartholomew, Thomas, and Phillip appear at a height of 148 feet on their respective bell towers. Thomas, the apostle who demanded proof of Christ's resurrection (hence the expression "doubting Thomas"), is visible pointing to the palm of his hand, asking to inspect Christ's wounds. Bartholomew, on the left, is turning his face upward toward the culminating element in the Passion facade, the 26-foot-tall gold metallic representation of the resurrected Christ on a bridge between the four bell towers at a height of 198 feet.

Future of the project. The apse of the basilica, consecrated by Pope Benedict XVI in November 2010, has space for 15,000 people and a choir loft for 1,500. The towers still to be completed over the apse include those dedicated to the four evangelists—Matthew, Mark, Luke, and John—the Virgin Mary, and the highest of all, dedicated to Christ the Savior. By 2022, the 170th anniversary of the birth of Gaudí, the great central tower and dome, resting on four immense columns of Iranian porphyry, considered the hardest of all stones, will soar to a height of 564 feet, making the Sagrada Família Barcelona's tallest building. By 2026, the 100th anniversary of Gaudí's death, after 144 years of construction, the Sagrada Família may be complete enough to be called finished. Lines to enter the church can stretch around the block. Buy your tickets online, with a reserved time of entry, and jump the queue.

Book an Experience at Barcelona VIEW ALL