Long before Harry Potter cast his spell on the world, the people and places of Portugal inspired J.K. Rowling in creating her magical realm.

Long before a young wizard named Harry Potter cast his spell on the world—launching a multibillion-dollar empire of books, movies, theme parks, merchandise, and even a play (soon to hit Broadway)—the people and places of Portugal inspired author J.K. Rowling in creating her beloved magical realm.

She started outlining the series and began the first book in her native England before moving to Porto, Portugal’s second-largest city, to teach English in 1991. Over the next two years, as she progressed in her writing, she borrowed from the sights, culture, and history of the city and the country to infuse her work with color and texture.

Although some of these connections may be urban legend, we couldn’t resist following the enchanting Potter path through Portugal. 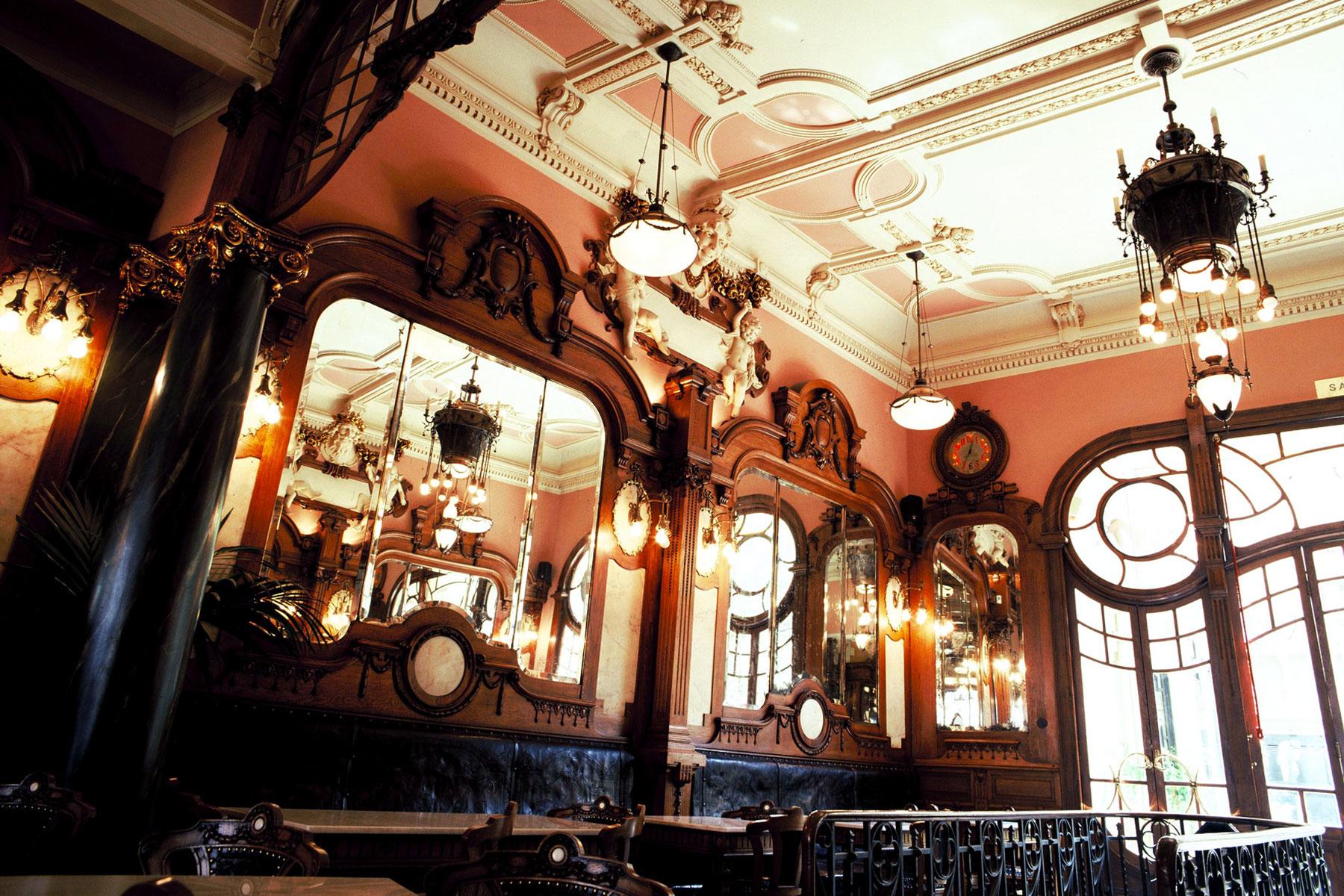 This is where the magic happened. While living in Porto, Rowling was a frequent patron of the Cafe Majestic, where she reportedly worked on the first book in the series, Harry Potter and the Philosopher’s Stone (renamed Harry Potter and the Sorcerer’s Stone for U.S. distribution). Legend has it that she jotted down notes on cafe napkins when inspiration struck.

The restaurant, opened in 1921, was a fitting setting for Rowling to write, considering its fanciful Art Nouveau design and history as a social hub for intellectuals and bohemians. 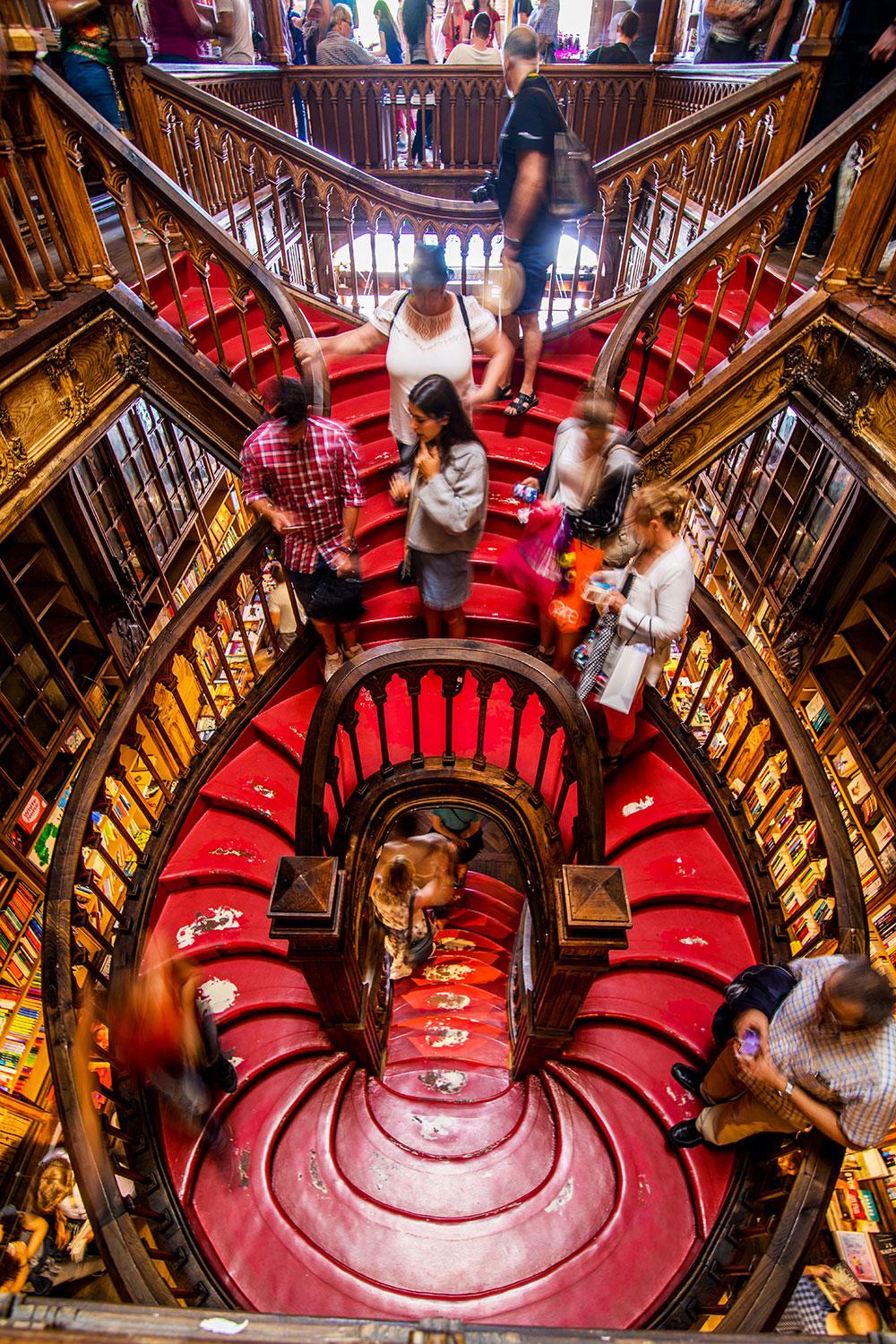 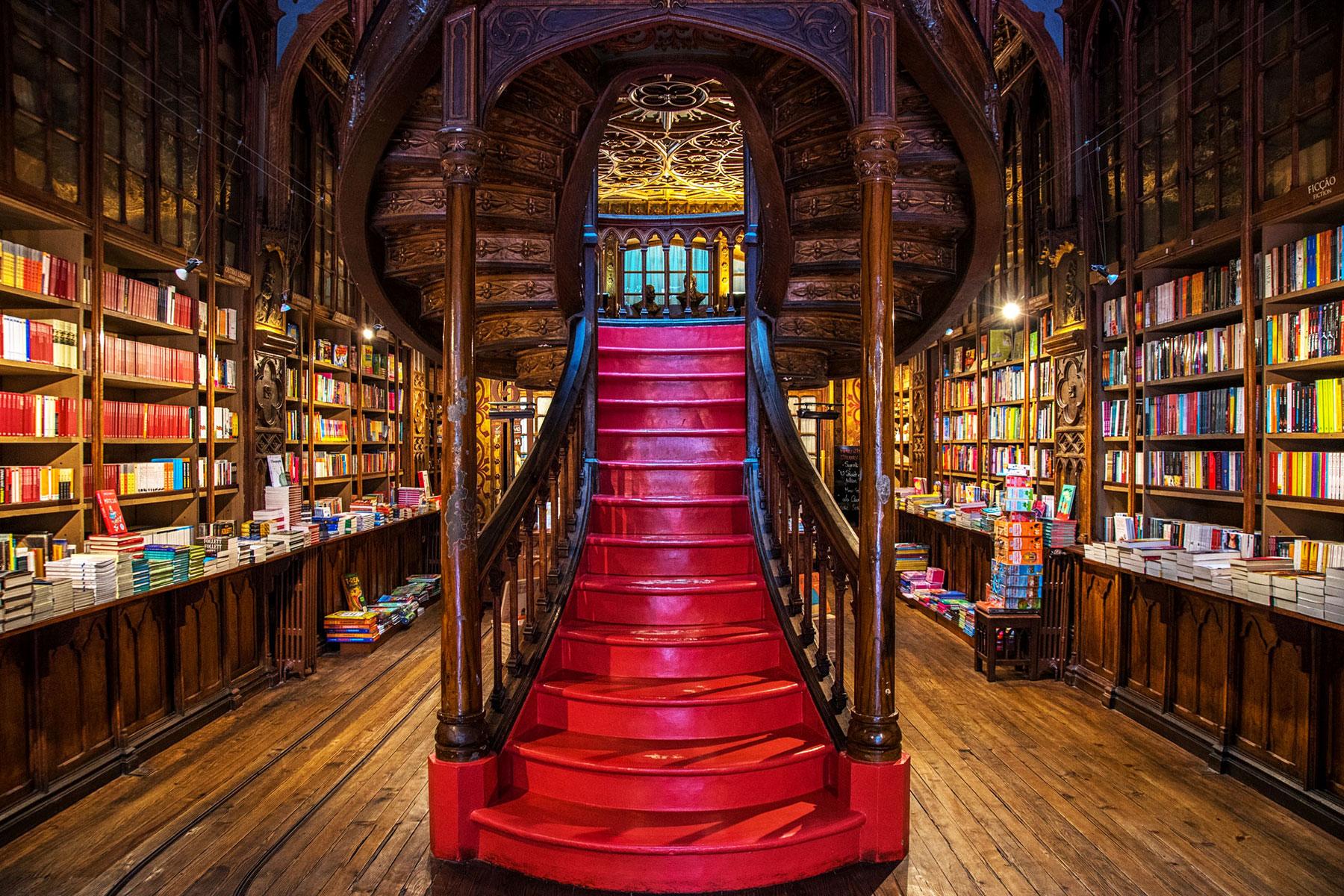 Dating back to 1906, Livraria Lello (Lello Bookstore) is one of the most stunning bookstores in the world, boasting unique architecture that blends elements of Neo-Gothic, Art Deco, and Art Nouveau styles. The two-story venue comprises intricate woodwork, a large stained-glass skylight, and its signature red spiral staircase, which starts as one set of stairs and splits into two that join in a circular design.

Not only do Potterheads believe that Livraria Lello inspired Flourish and Blotts, Diagon Alley’s premium bookstore, but that the incredible staircase gave rise to the elaborate Grand Staircase at Hogwarts School of Witchcraft and Wizardry, known for changing its configuration without notice.

INSIDER TIPLivraria Lello gets very crowded. You need to buy a ticket a few doors down from the shop to enter, so we recommend doing so and queuing up before the store opens at 10 a.m. Mischief managed. 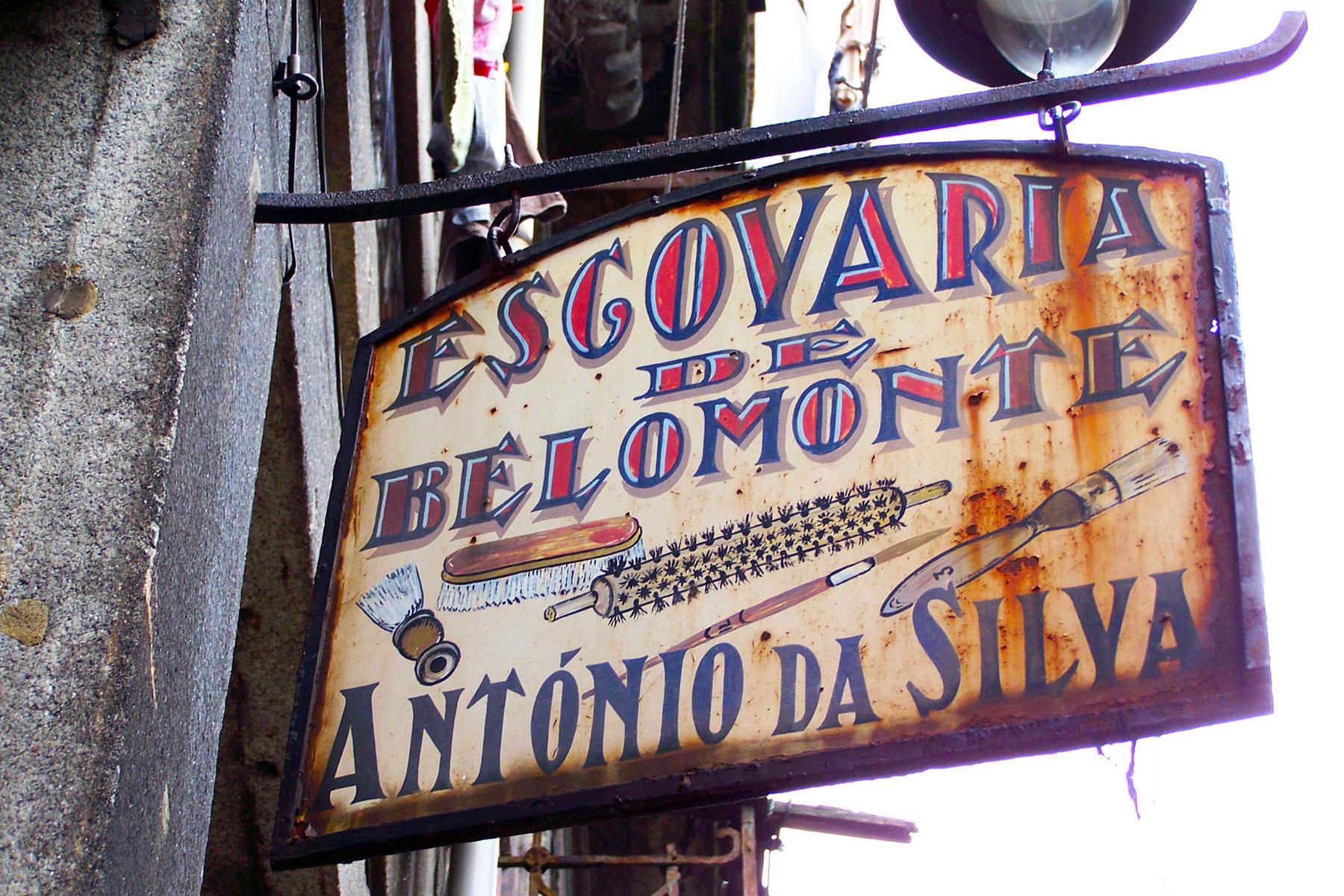 There’s no denying the aesthetic similarities between the magical brooms in “Harry Potter” and the offerings at Escovaria de Belomonte (Brush of Belomonte). The brush store’s brooms, made by hand using high-quality woods and natural fibers, have a rustic look devoid of dyes or synthetic materials—just like the primitive-looking brooms in the series.

Some believe that Escovaria de Belomonte, founded in 1927, may have also inspired the broom shops on the series’ Diagon Alley, such as Broomstix and Quality Quidditch Supplies, where Potter ogles his first broom, the Nimbus 2000, in a window display.

Plus, it’s worth noting that the whimsical lettering on the store’s sign bears a striking resemblance to the font used on the Harry Potter books and all affiliated branding. 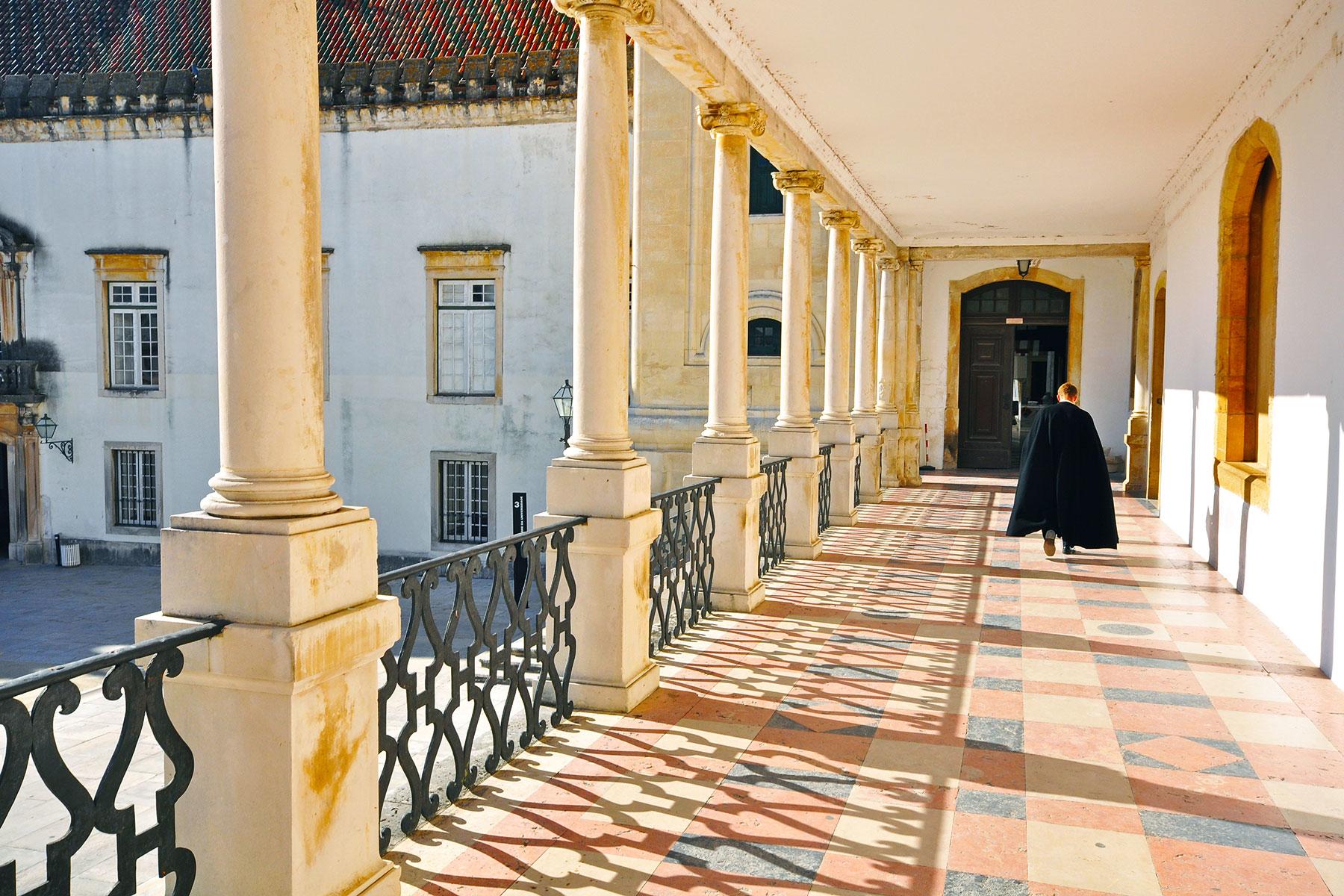 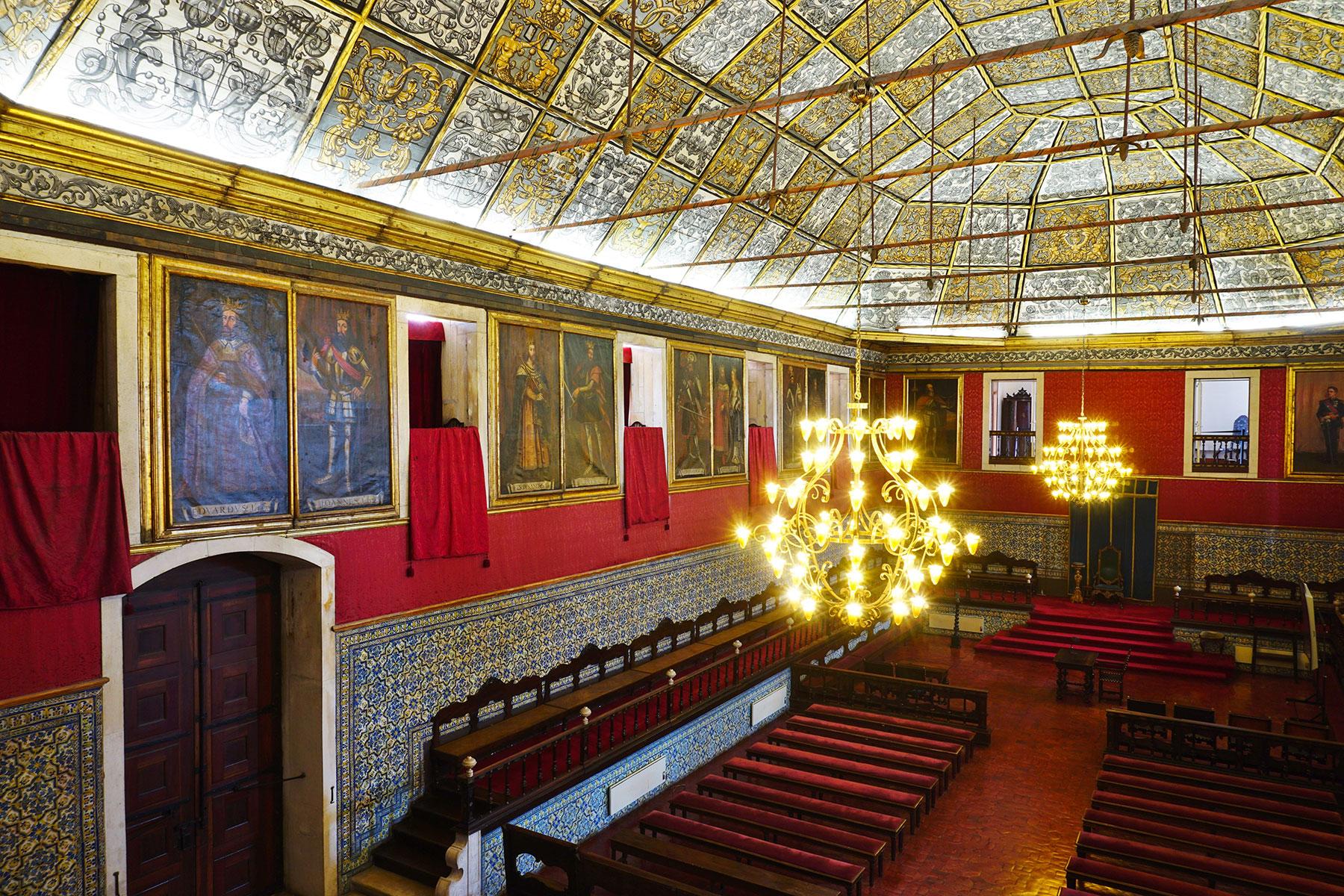 Young witches and wizards at Hogwarts abided by a strict dress code, which called for a white button-down shirt, a tie (with one’s house colors), a sweater, dark trousers or skirt, and a full-length cape.

You’ll find students in a near-identical uniform of a black suit, tie, and cape at the Universidade de Coimbra (Coimbra University)—the oldest continuously operated university in the world—about an hour-and-a-half south of Porto. The traditional ensemble echoes the institution’s pride in its 728-year history. 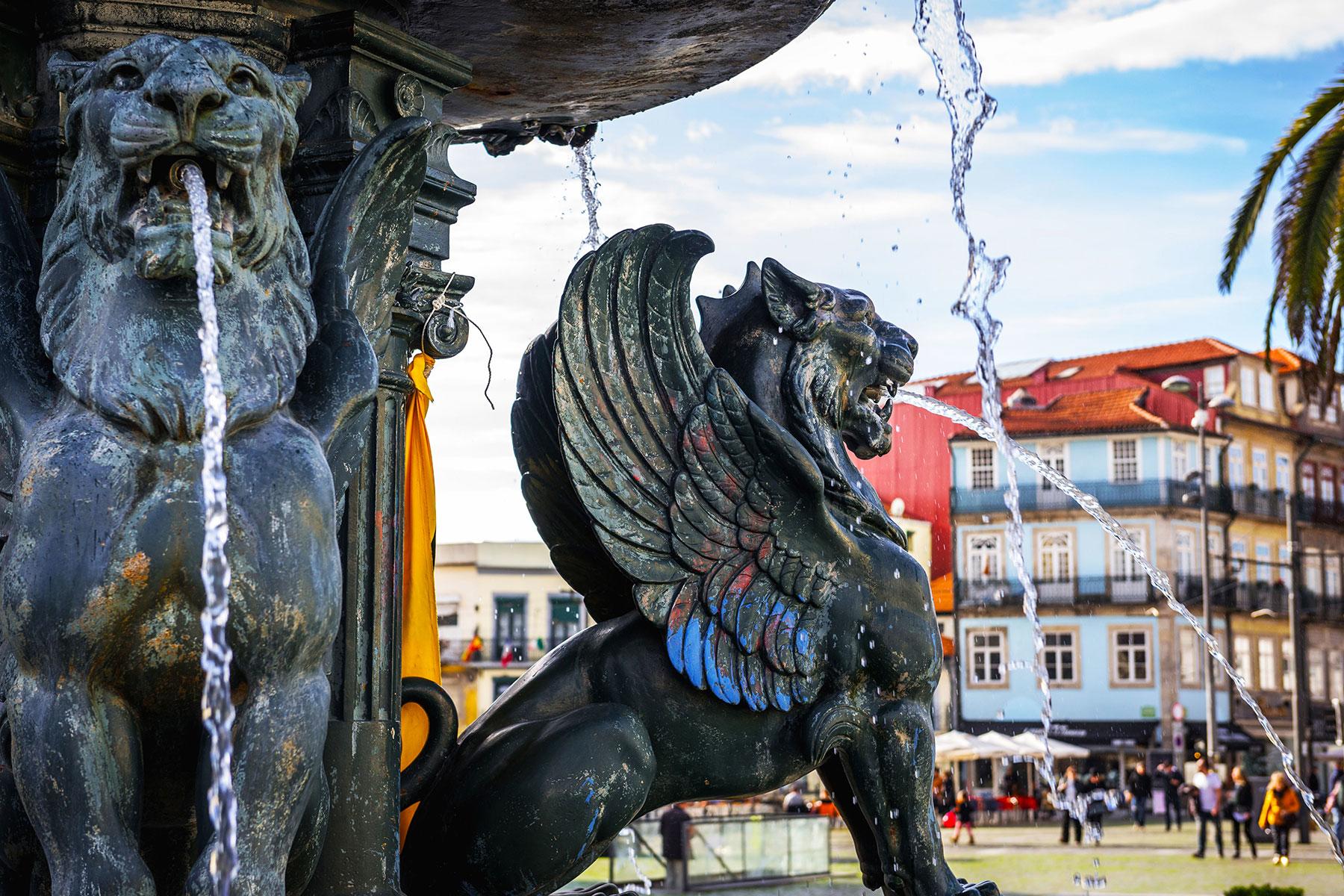 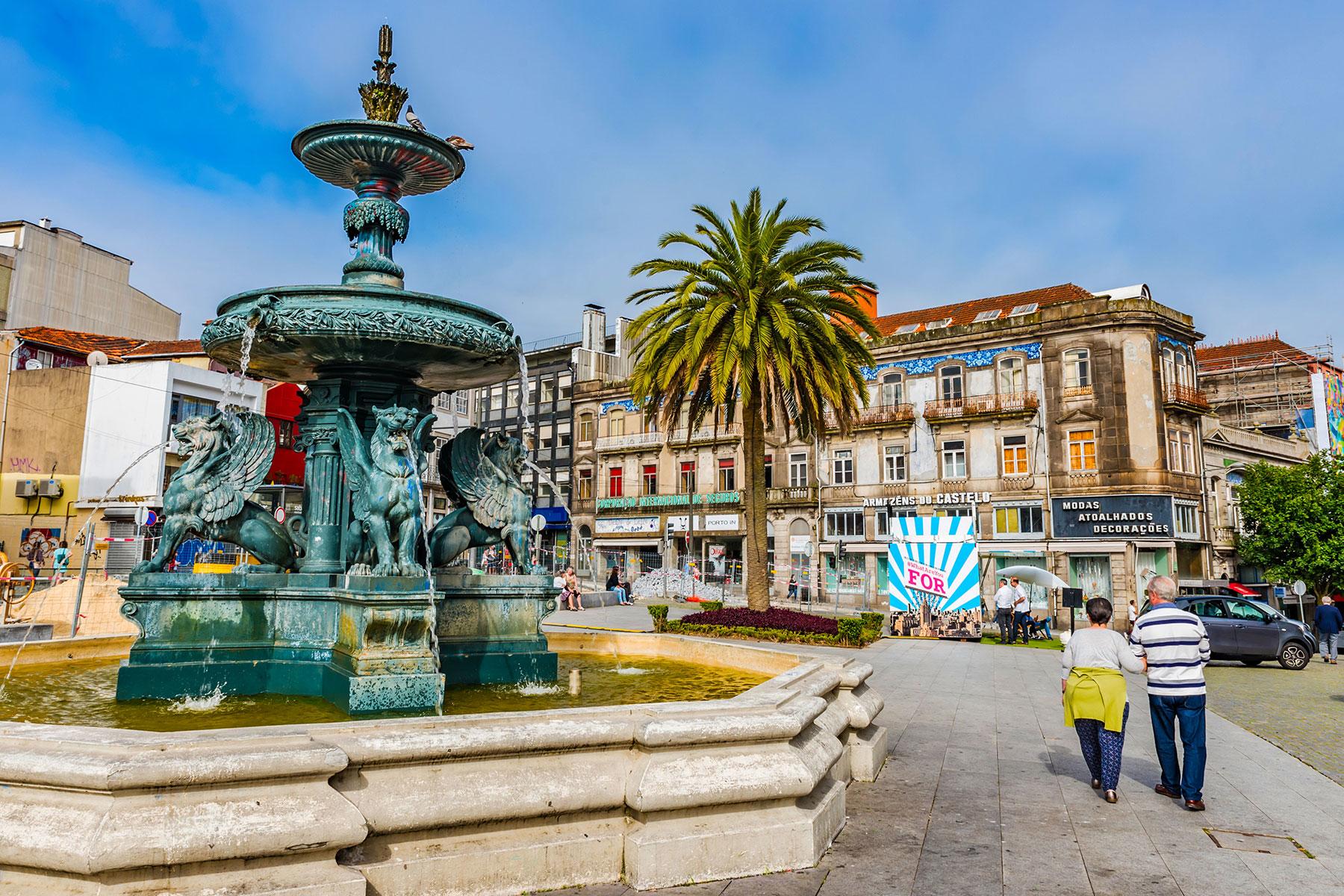 In the series, Gryffindor—the house that counts Potter and most of the story’s protagonists among its members—embodies courage, daring, and nerve. Thus, the lion is the perfect animal to adorn the red house insignia, with the beast reared back on its hind legs and its forepaws raised in a fierce, combative pose.

Although there’s no confirmed link, we like to imagine Rowling strolling through Porto and stumbling upon the Fonte dos Leões (Fountain of the Lions), tucked away in an isolated urban area, and having an “a-ha” moment upon seeing the four lion statues ringing the fountain.

Interestingly enough, the fountain’s lions have wings, making them akin to the mythical griffin—which isn’t too far off from “Gryffindor,” if you ask us. And, to boot, the fountain is nearly identical to the Leicester Square fountain in Rowling’s native England. 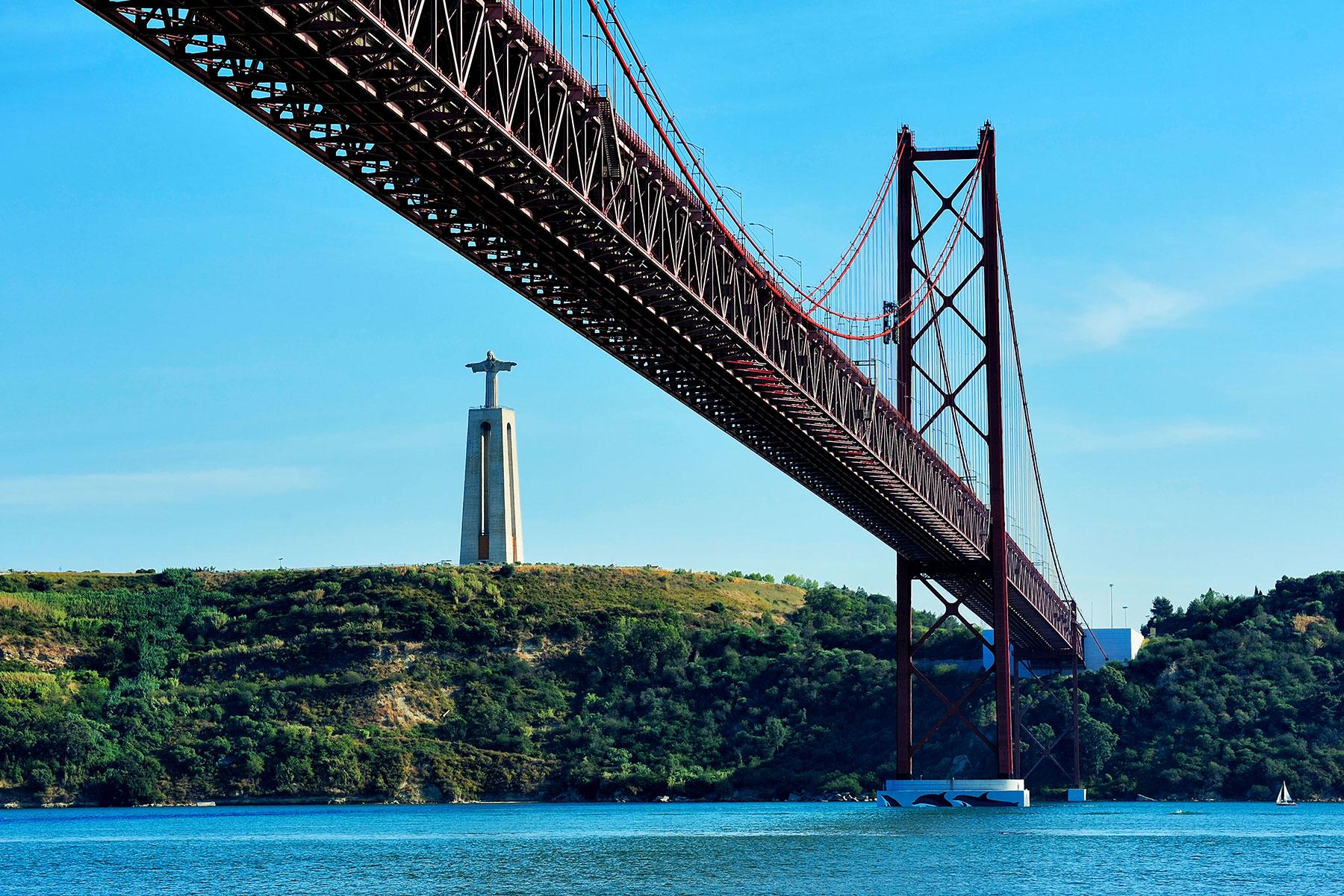 While some fans may quibble with this definition, it’s pretty clear that, among the four houses at Hogwarts, Slytherin is the evil one. Its members include many antagonists (Voldemort chief among them), and its namesake was a cunning, power-hungry wizard: Salazar Slytherin.

So it only makes sense that Rowling may have named the house founder after one of Portugal’s most notorious rulers, António de Oliveira Salazar. As prime minister from 1932 to 1968, he led a dictatorship that crushed any opposition with a secret police force and strict censorship. We wouldn’t be surprised if he spoke Parseltongue, too. 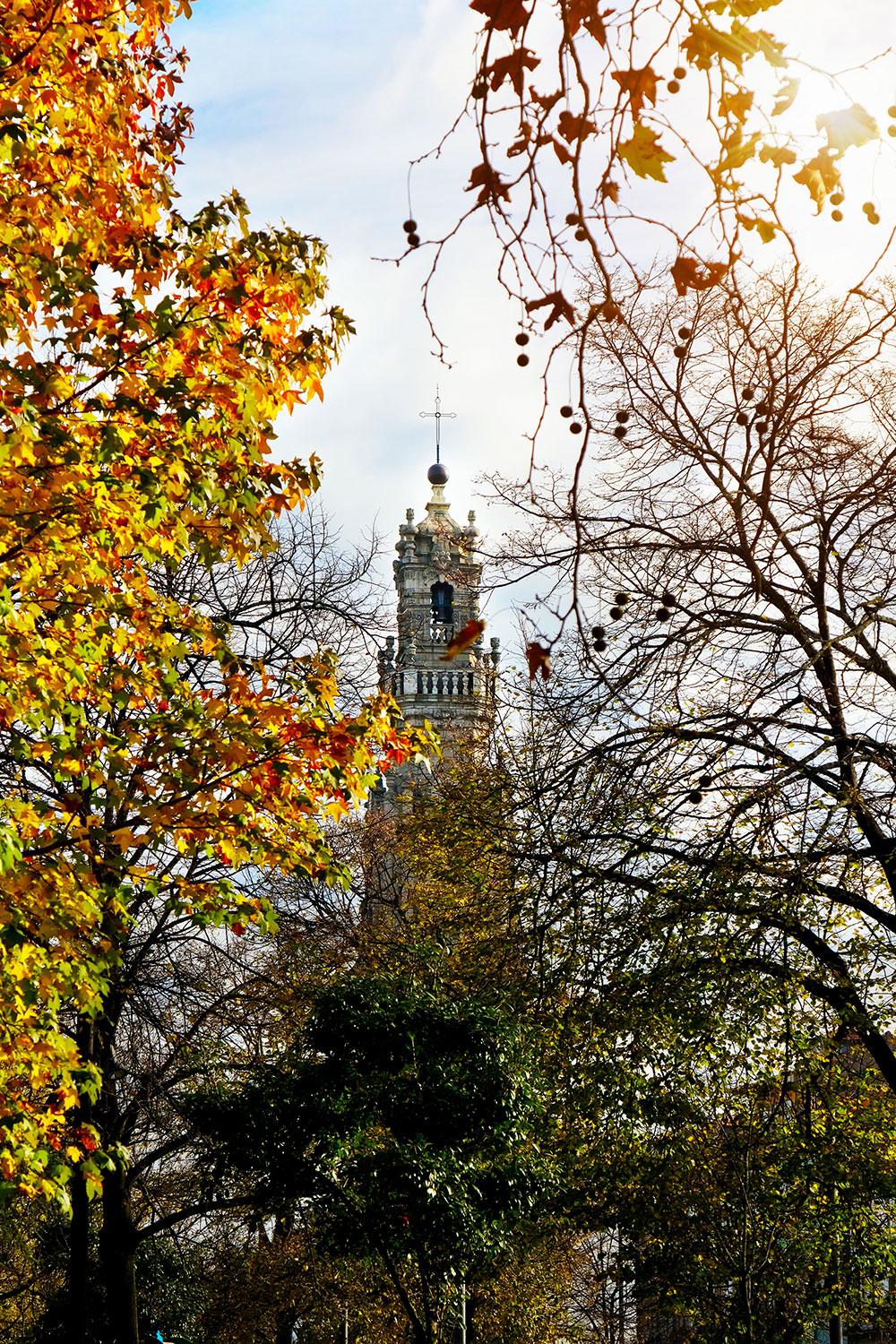 Potterheads will remember with a sniffle one of the most heartbreaking moments in the series (spoiler alert!): when Severus Snape blasts Albus Dumbledore with a fatal curse at the top of the Astronomy Tower, the highest point at Hogwarts, sending the beloved headmaster plummeting hundreds of feet to the ground.

Many claim that the tower was inspired by the Torre dos Clerigos (Clerigos Tower), which stands at the top of an 18th-century church and serves as one of the most recognizable landmarks in the city. Climbing 225 steps affords visitors a dizzying, 360-degree view of the city—just like the panoramic vistas offered by the Astronomy Tower. 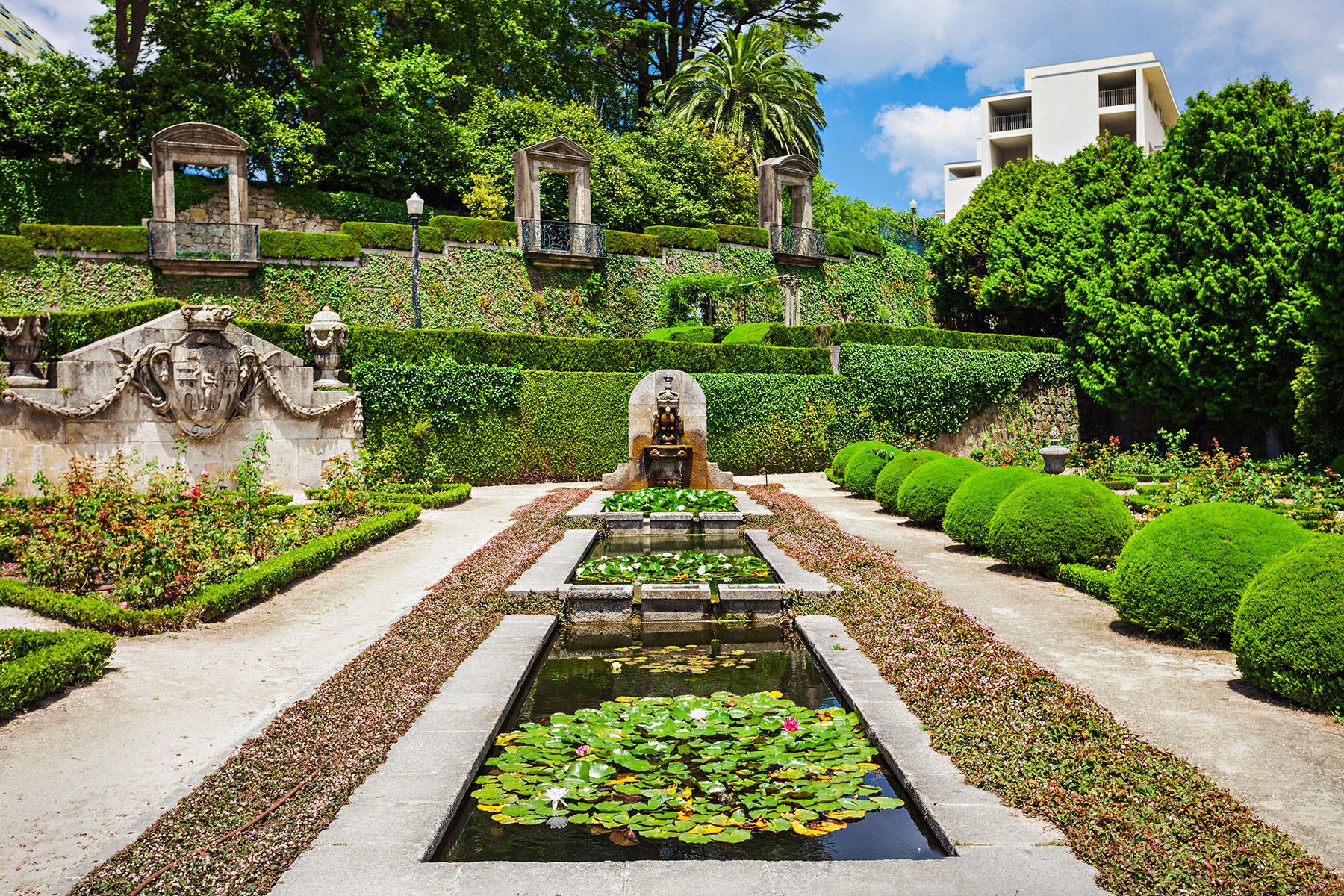 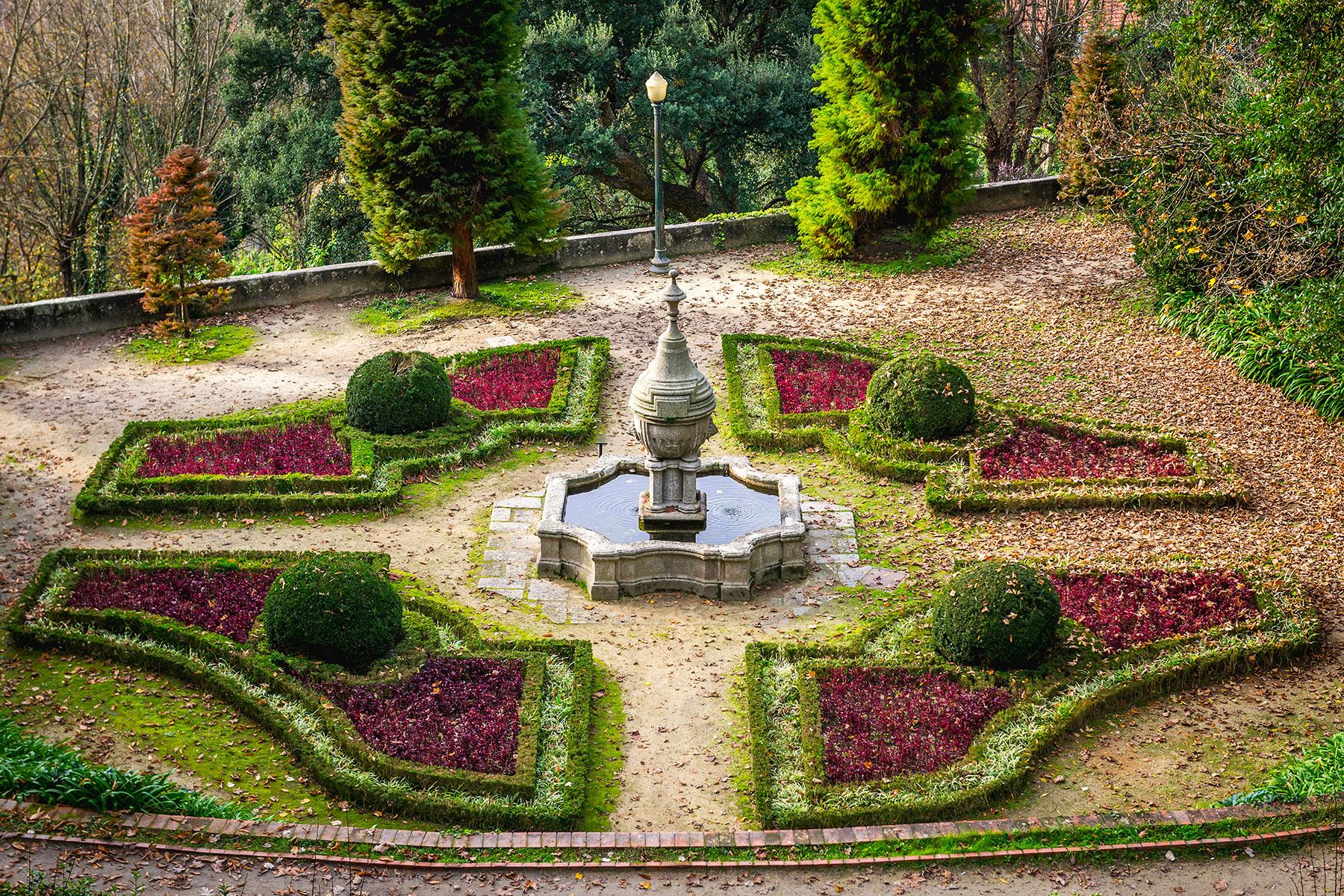 PHOTO: Fotokon / Shutterstock
Previous Next
8 OF 10

Hogwarts students were prohibited from visiting the nearby (and aptly named) Forbidden Forest, but they found the place irresistible. The verdant, overgrown forest held surprises around every corner.

Although they’re certainly more manicured than the Forbidden Forest, the Jardins do Palácio de Cristal (Crystal Palace Gardens) are just as bewitching, perched upon a bluff overlooking the Douro River and containing exotic flora and fauna, like roaming peacocks. It’s easy to get lost among the mosaic of meandering paths and enchanting themed gardens, like Jardim dos Sentimentos (Garden of Feelings) and Jardim das Plantas Aromaticas (Garden of Aromatic Plants). 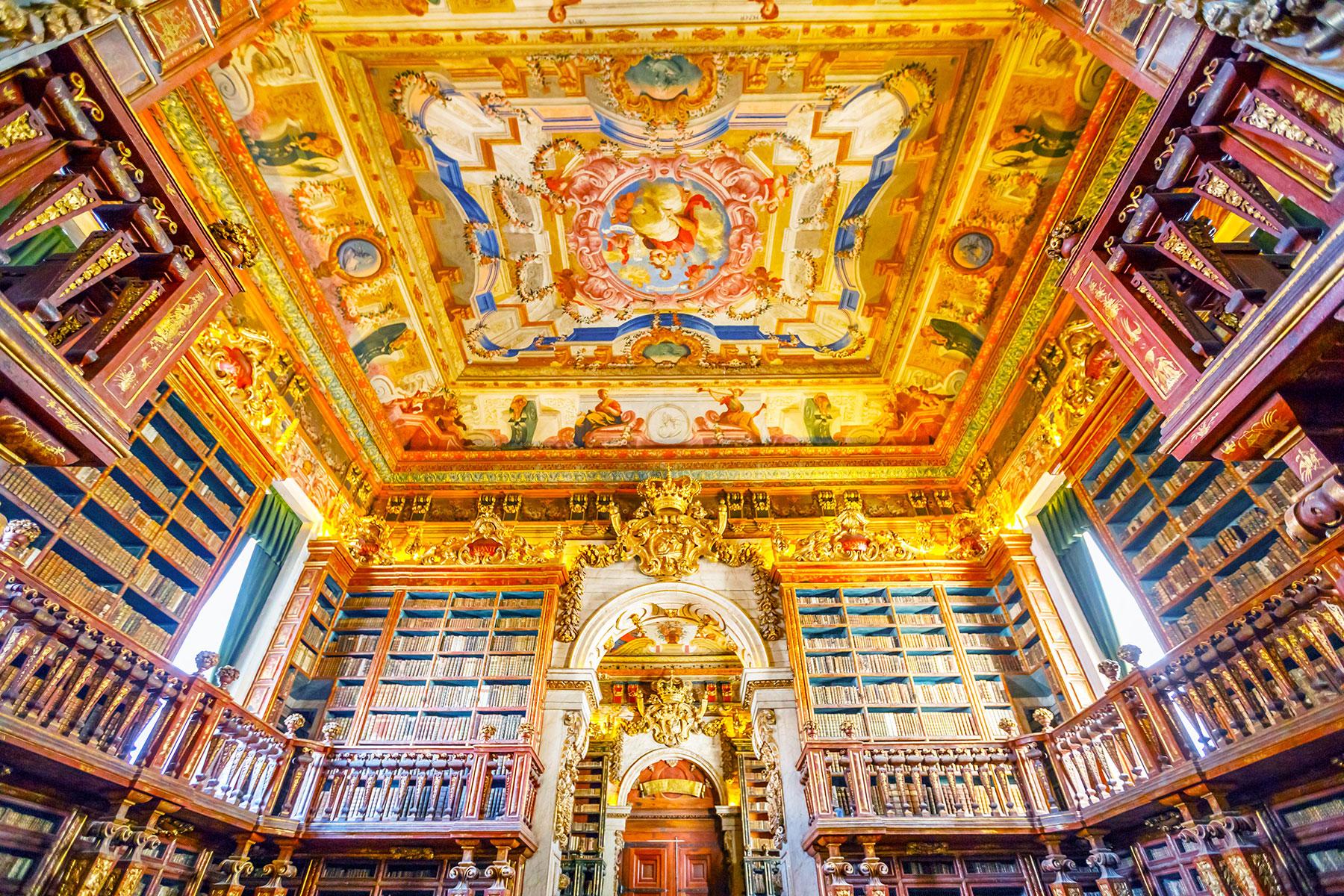 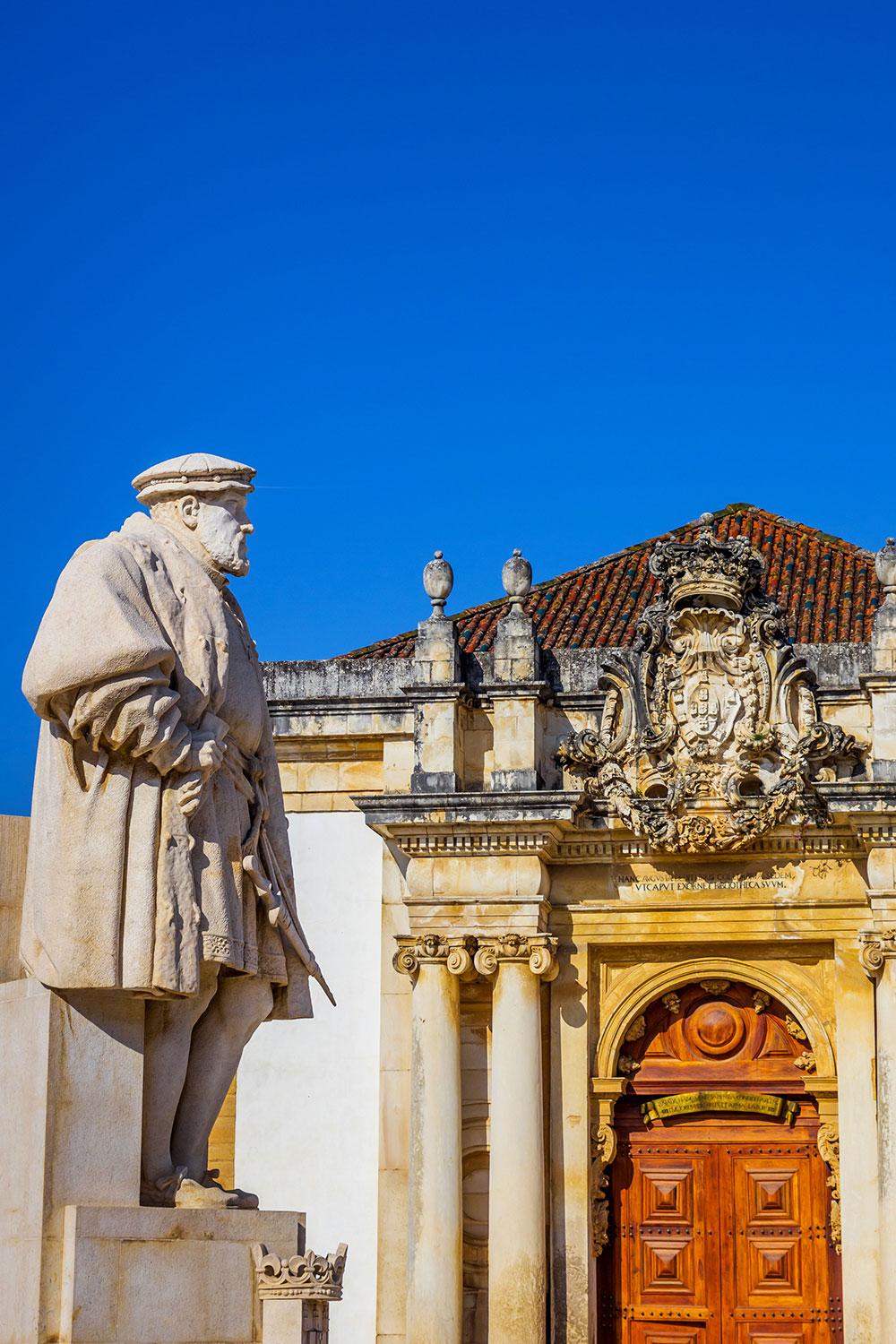 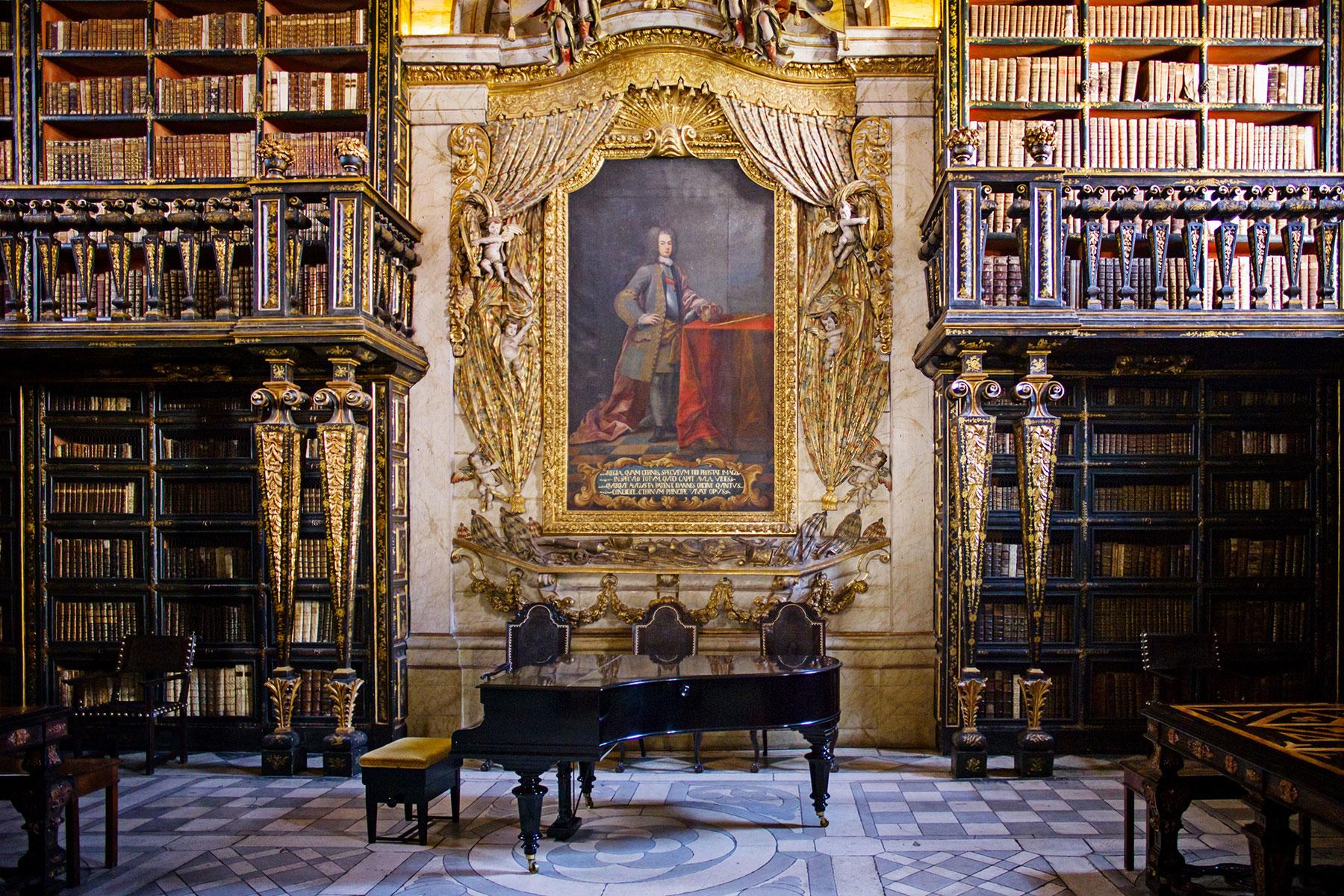 Potter and his comrades spent a lot of time at Hogwarts Library, studying for their OWL exams and uncovering magical secrets. Keen observers have noted many similarities between this library and Biblioteca Joanina (Joanina Library) at Universidade de Coimbra (Coimbra University). Both facilities comprise multiple floors, soaring ceilings, large arched windows, wood accents and tens of thousands of books.

INSIDER TIPIf the library’s ancient tomes seem well-preserved, you can thank the night crew: Every evening, a colony of bats is released into the library to consume insects that might otherwise damage the collections. 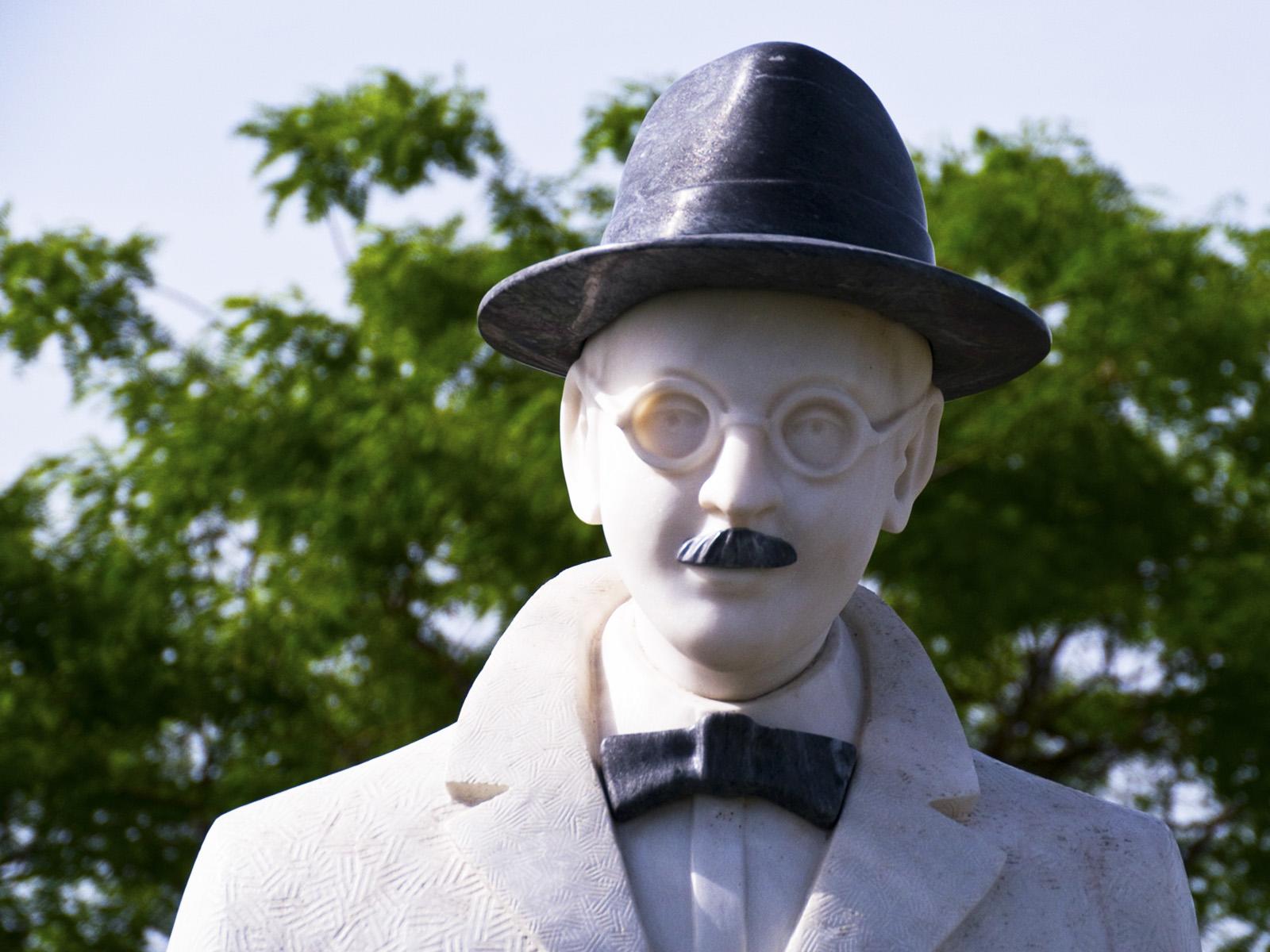 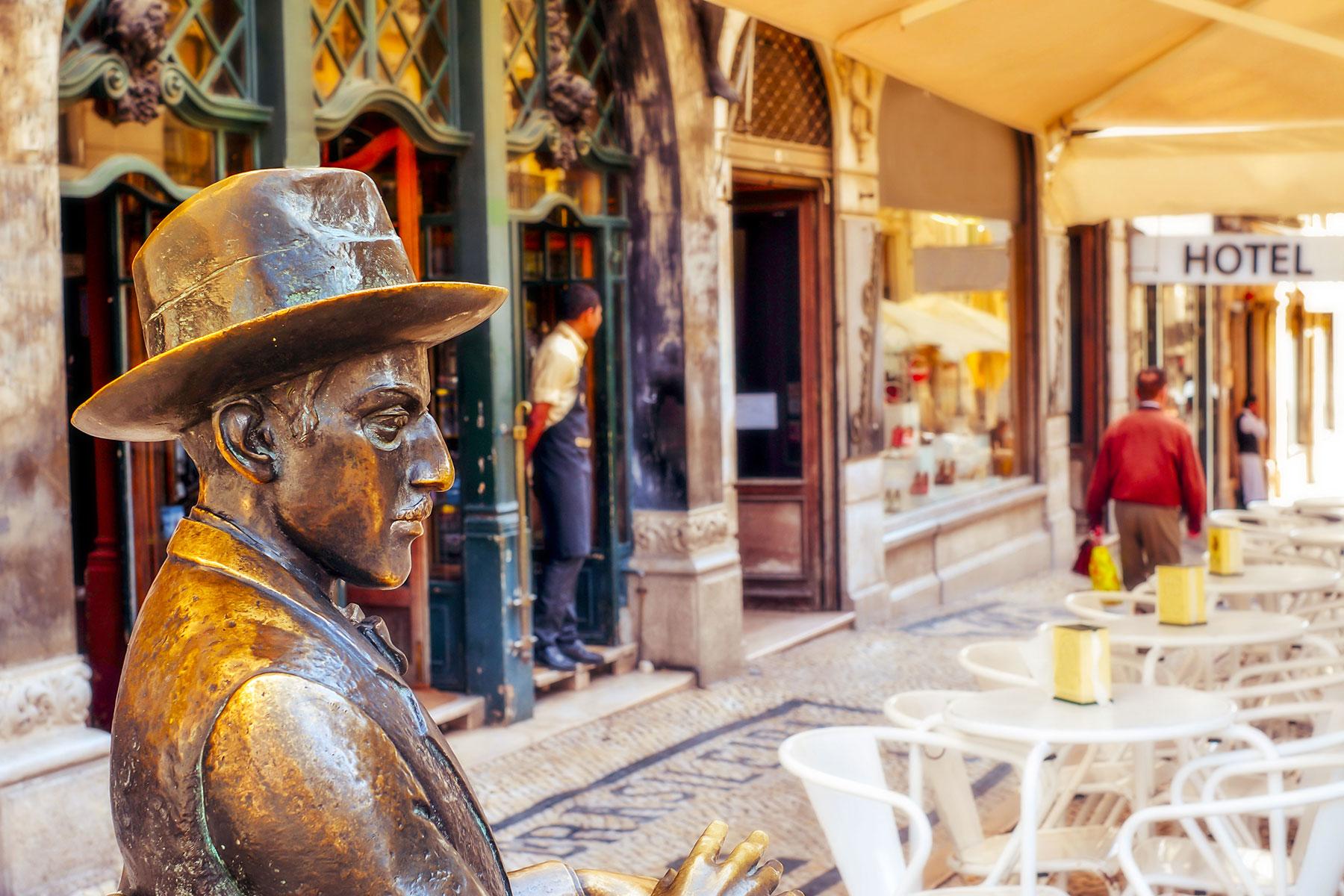 One of Portugal’s most famous writers—and considered one of the greatest poets of the 20th century—Fernando Pessoa had a distinctive look: a black fedora, a black mustache, and glasses. And, while we think “the boy who lived” would’ve looked dapper in a fedora, it’s the latter detail that Rowling may have borrowed from Pessoa: round, wire-framed glasses. The writer, like Potter, was rarely seen without them, and the spectacles became a signature accessory for both figures.

Although he was born in Lisbon, Pessoa’s likeness—often simplified to just hat, glasses, and mustache—can be found throughout the country on statues, murals, stamps, and coins. So it’s likely Rowling encountered his famous visage at some point, even if she didn’t consciously mimic his glasses.

INSIDER TIPLearn more about the life and work of Pessoa at the Casa Fernando Pessoa Cultural Center, located in the Lisbon building where he lived from 1920 until his death in 1935.