Let me tell you about my recent short-but-satisfying vacation into the land of testosterone.

You’ve probably seen a commercial for Fast and Furious Presents: Hobbs and Shaw, the cinematic feat that inspired this trip and changed my life. As such, I have chosen to insert myself in the Fast and Furious universe, which features characters in a gritty (yet refined) world who regularly engage in hand-to-hand combat, watch people tackle each other, and drive very fast cars. You should know that I’ve been listening to a playlist on YouTube titled “Action Movie Soundtracks,” since returning, as well.

For you, reader, along with my recount of the itinerary, I’ve rated each Hobbs and Shaw experience using “hulking biceps” as a metric, obviously, to let you know just how “action-heroey” I felt while engaged in the moment and expanded on how you can also have yourself a heart-racing adventure through London.

While I can loosely define the sport that is (American) football, I’m by no stretch a passionate fan, so traveling all the way to London to see the Los Angeles Rams play the Cincinnati Bengals was certainly a decision that I made. I’m glad I did though because I ultimately enjoyed myself very much and, I must say, Wembley Stadium is impressive! And by impressive I mean large—the largest football stadium in all of England, actually, and the second-largest stadium in Europe. If I enjoyed stadiums say, as much as my father (a confirmed sports fanatic so passionate that he will watch anything sports-related if it pops up on a screen; I once caught him watching a competitive hot dog eating contest over the holidays), I would be in heaven.

So, if you’re visiting London (with rowdy friends, especially) and you find yourself with a chunk of time, it’s certainly worth attending a game—the electric energy emitted from the spectators was palpable and exciting—and/or a tour just to admire the arena’s scope. The official 90-minute tour grants you a look at the changing room, the players’ tunnel, and a photograph with the coveted FA Cup trophy, which is a big deal according to my research. Additionally, my VIP ticket secured me a seat at a table in a giant banquet room located steps away from my seat. It housed an open bar, a buffet of food that included lobster mac ‘n’ cheese, ribs, and wings—carbs and protein, or fuel for the energy we were about to be expending cheering—and a live band singing upbeat tunes that wouldn’t be out of place at your cousin’s wedding. I can get behind these things, and I did: shortly after I sat down, I tossed back a mimosa that was placed in front of me (mimosas are a personality trait, thanks!). There was also a man walking around shucking and serving oysters—a mollusk-monger, if you will, who I later decided needed a solo movie where he plays a spy and this was his disguise.

After indulging, I headed into the stadium, found my seat, and got confused. Football is much easier digested on TV, where you are guided by commentators drawing squiggly lines and you’re actually able to see what’s going on. Luckily, I was seated near a group of beer-fueled attendees who were cheering for the Rams, which inspired (intimidated?) me to cheer as well. I also live in Los Angeles and didn’t want to feel shame. Whenever they cheered, I cheered, and three Bud Lights later, I was in it to win it (sorry, Cincinnati Bengals, who did, in fact, lose). 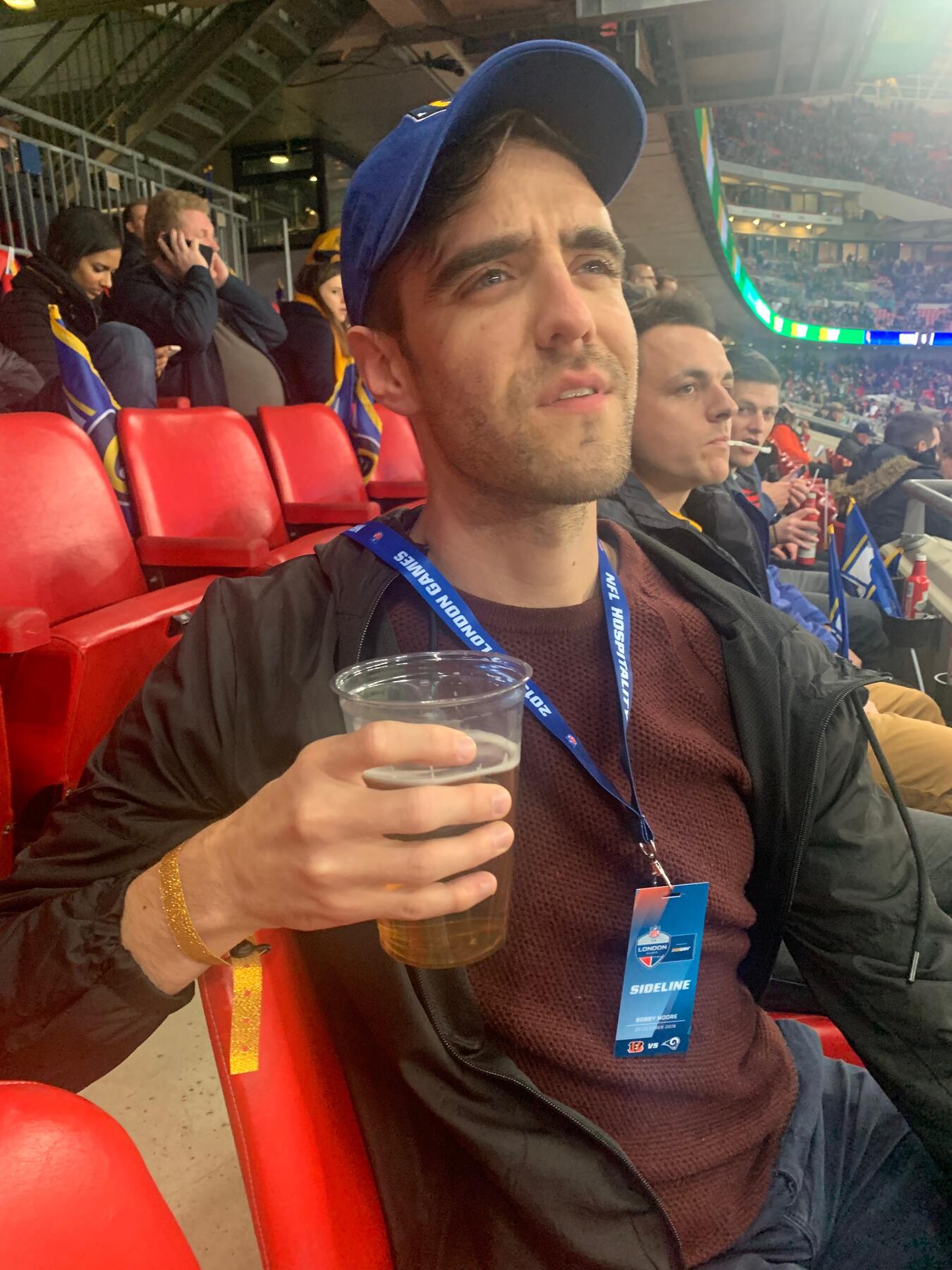 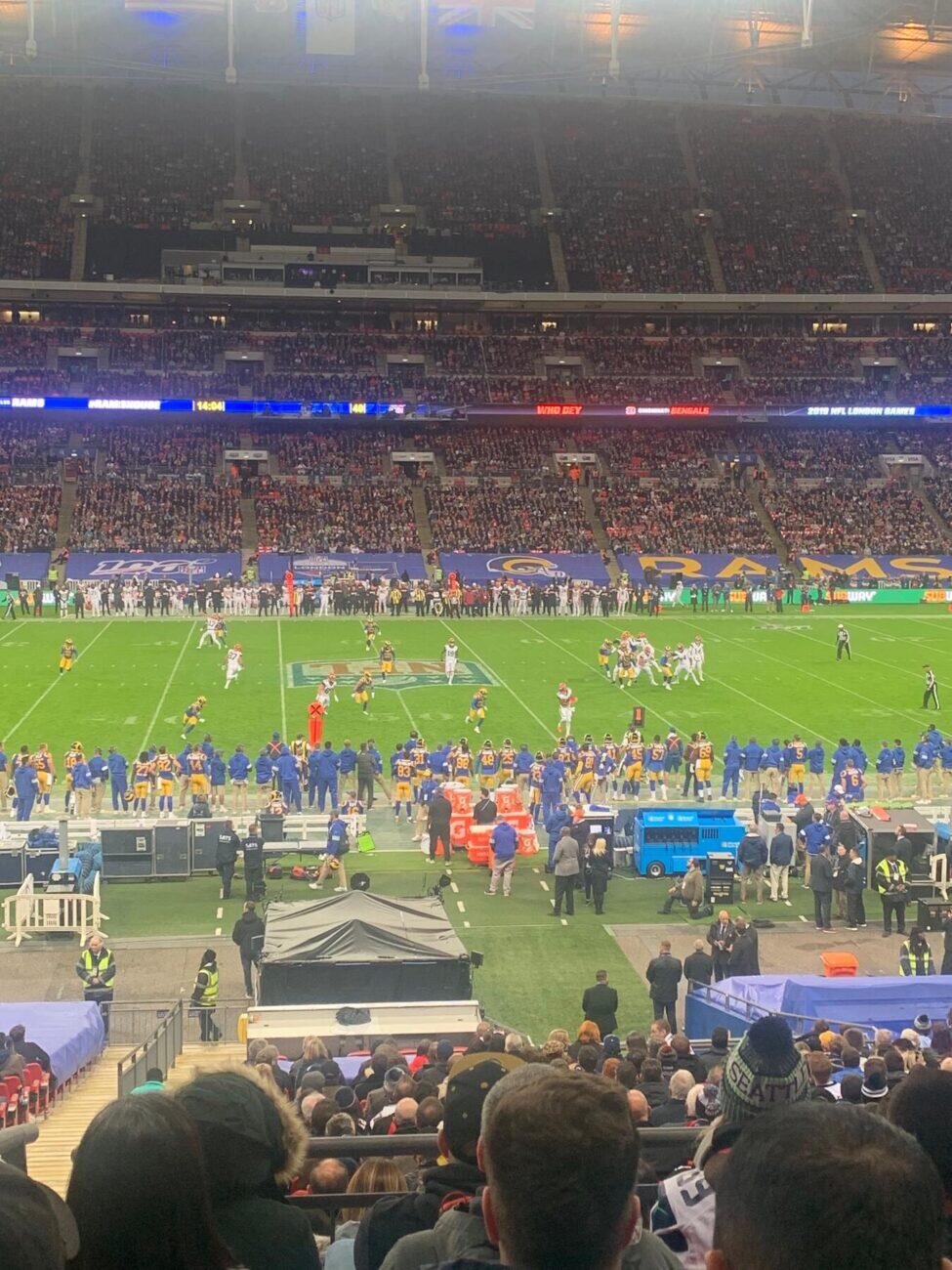 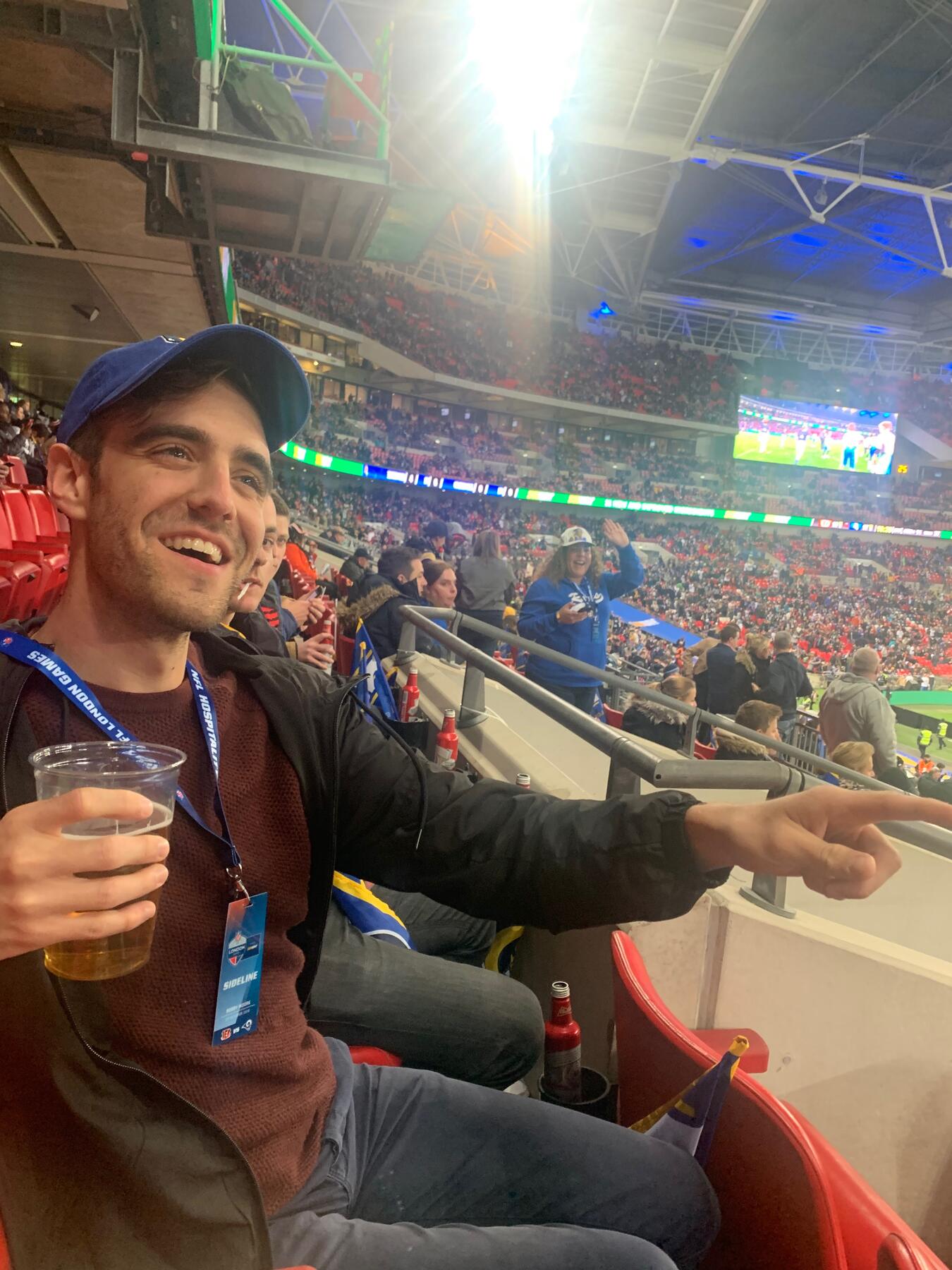 Although the game was satisfying, it was somewhat of a runaway win, so I found myself wanting more. I was pretty beat, however, so I decided to shut my eyes for a good night’s sleep upon reaching St. Martins Lane Hotel, a real treat of a property which provided the backdrop for my masculinity for the duration of my trip with leopard-print carpets, many neon lights, and a splashy gym next door that both Hobbs and Shaw would love to work out at. Thankfully, I got the rest of my action fix the next morning while inhaling an omelet and a protein shake on my plush comforter when I turned on the TV and tuned into Doom. The 2005 video-game-to-film adaptation starring The Rock (!) follows a team of space marines as they battle demons from hell on Mars—it was great!

I like to drive and I’m a decent driver, despite the commentary my friends might give when asked to rate my driving abilities. They don’t know what they’re talking about—Los Angeles is a famously difficult place to drive, OK! So, as I passed through the gates of the Silverstone Race Track the next day, one of the highest-profile motor racing circuits in England, I thought: “I’ve got this, no problem.” Before the day was out, though, I learned that the only thing I’ve truly got is a penchant for losing my lunch when I’m not the one in the driver’s seat.

I was directed into one of the circuit’s palatial garages for a briefing on how to handle the track (so to speak) and how to handle the car that I would be driving—a Maclaren. The Maclaren, a type of car only an action movie star could afford, is formidable. The model in which I jumped behind, the 720S, starts at $299,000 and can reach speeds of up to 240 mph. I was unwell upon learning this information, despite my self-proclaimed “decent” driver status, but it was too late to back out.

INSIDER TIPSilverstone Circuit offers a bevy of driving experiences similar to the one here, where you can hop behind the wheel of a Ferrari, Aston Martin, or BMW. It’s a great gift idea for thrill-seekers as there are no speed limits on the track. In fact, the track is currently running a Christmas Special Offer on Experiences—a 15% off voucher!

After a few photoshoots (the cars on display were sleek and fierce, and I couldn’t help myself—confidence is a key tool in an action star’s toolbox, after all), I piled in helmet first with my driver, Mike. He was a racer himself and was more than happy to answer any of the plebe questions I threw his way (I refrained from asking, “Will my weak wrists prevent me from properly shifting gears in this immensely powerful machine resulting in an anticlimactic death for us both?”). As we started to take off, though, the car felt reassuringly weighty, unlike other sports cars I had piloted in the past—I moved a friend’s dad’s Porsche once in a parking lot—which felt rather light. The reassurance of the car’s quick yet manageable response to my touch and Mike’s comfortable air kept my worries at bay. After a couple of laps, I remembered that this was supposed to be fun and exciting, so I pressed firmly on the gas and soon reached speeds of 150 mph at least one and half times! Mike claimed I correctly hit the turn’s apexes at least once or twice (still not sure what this means) and even gave my driving an “8/10!” after we came to a full stop back in the pit lane. I was initially excited about this, but later realized that that metric didn’t necessarily have a designation, so the “10” could have been “atrocious.” Mike was very nice, and I don’t think this was the case, so I’m going to remain in denial for the foreseeable future.

“Will my weak wrists prevent me from properly shifting gears in this immensely powerful machine resulting in an anticlimactic death for us both?”

He then got behind the wheel and I hopped in the passenger’s seat. We took off and he, from start to finish, maintained a style that was assured, swift, and secure—that of a professional race car driver, which he was. Unfortunately, I found out that when I’m not distracted by navigating the road myself, I become aggressively nauseous. I could barely take in the information he was providing about the track, Maclaren, and the industry, and by the time we were finished (which, thankfully, was much quicker than my turn), I was biting my lip and in need of fresh air. I got out and regrouped for the final activity at the track—which I was told would be an experience similar to something out of the movie. For some reason, I assumed this would be a virtual attraction featuring explosions (not unlike the Fast and Furious ride at Universal Studios Hollywood), but alas, I was incorrect and back in the passenger’s seat in the time it takes one of these cars to go from zero to 60. 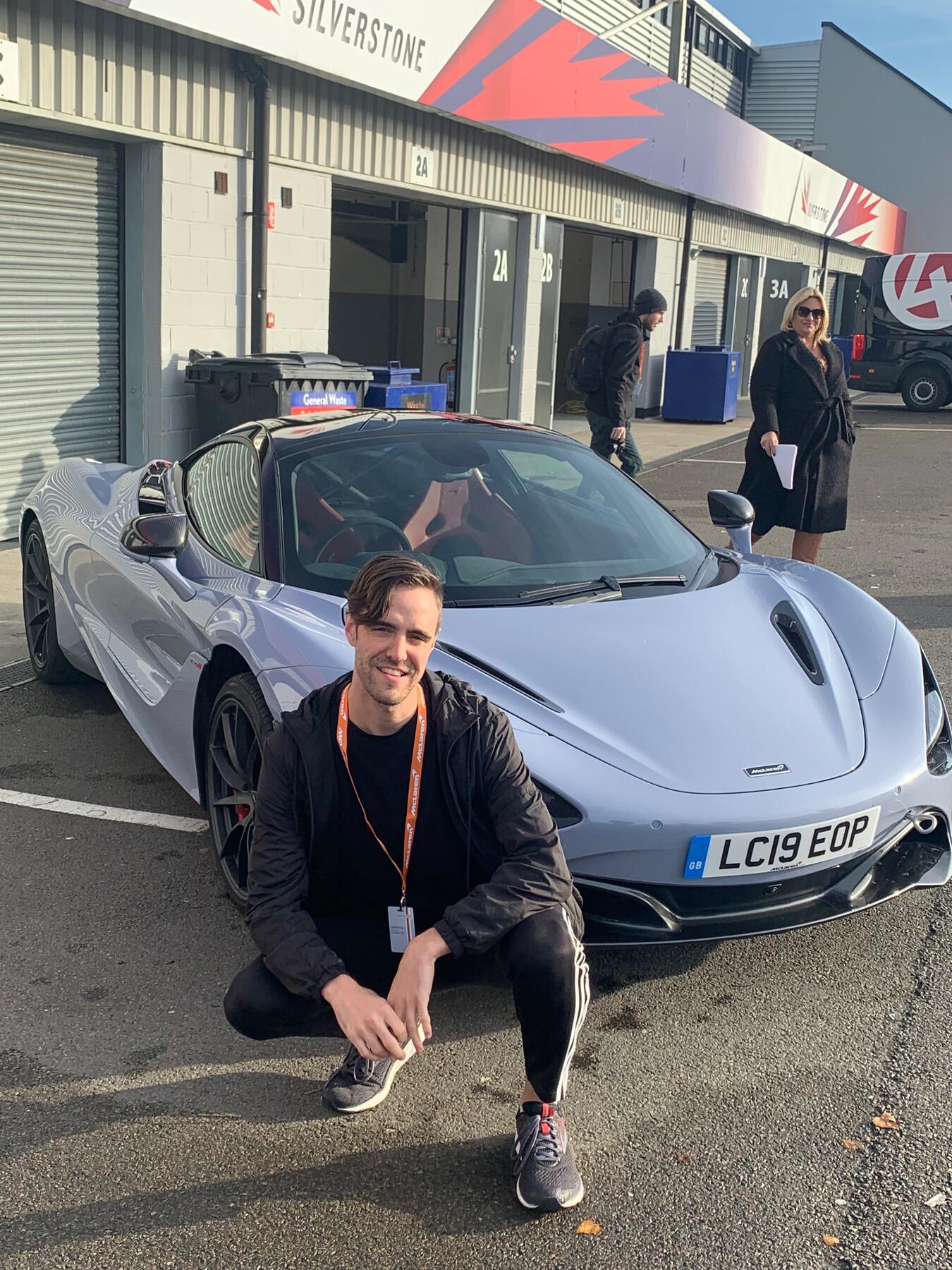 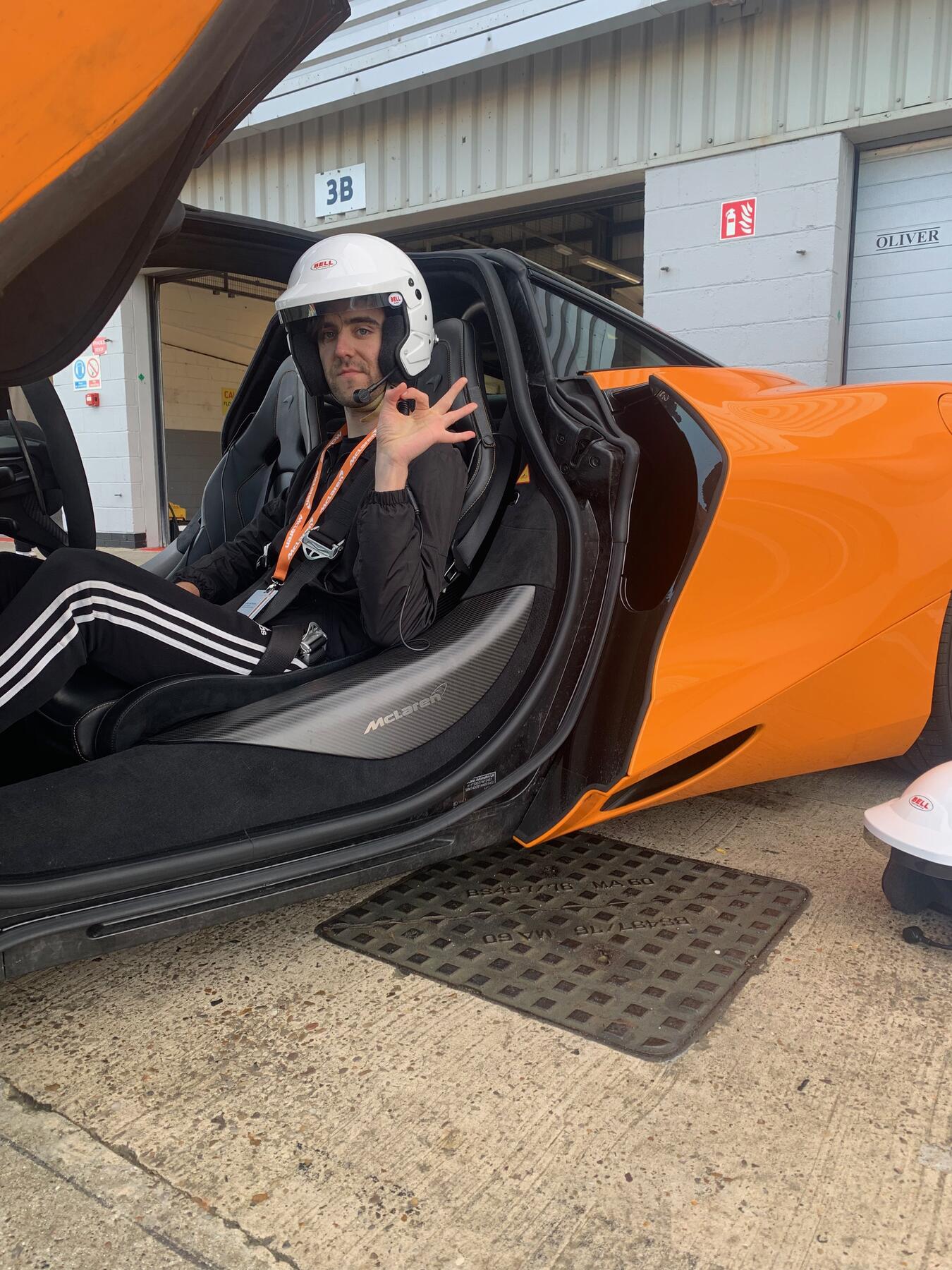 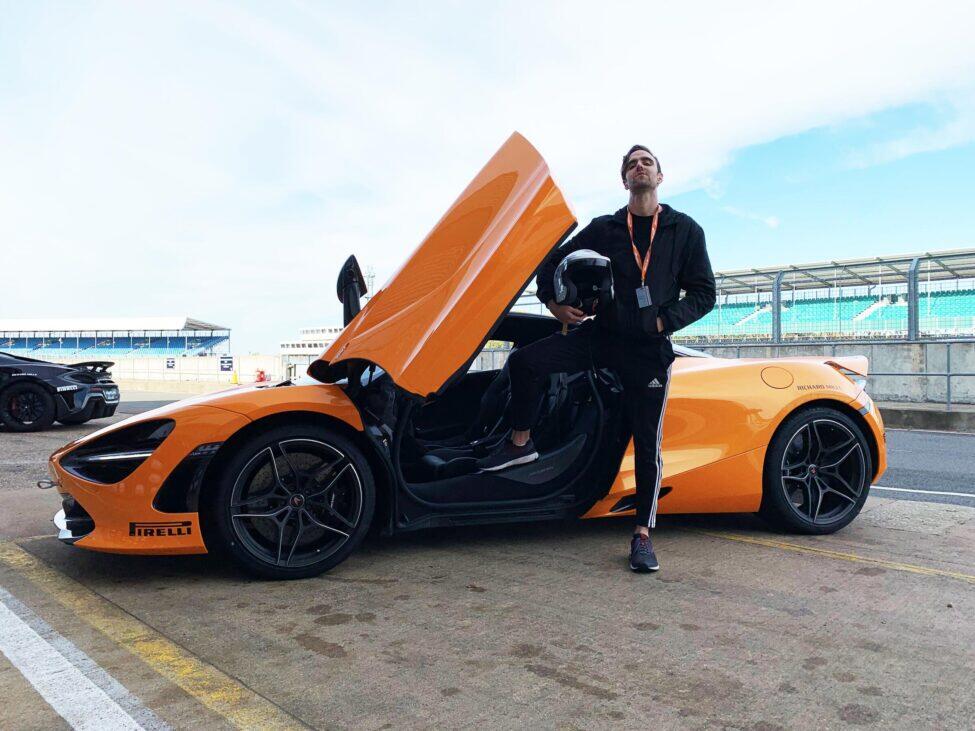 “I’ve got this,” I once again thought to myself, having momentarily regained my strength. The “experience” saw me and a driver racing neck-and-neck with another Maclaren at speeds of up to 160 mph, mere inches apart. Ten seconds in, and I was fully biting my lip, doing my best to muster a smile for the in-car camera. The experience lasted nearly as long as my previous ride with Mike, and if the car had come to a halt six seconds later than it had, I would’ve inquired about a barf bag.

Fortunately, I hadn’t had lunch yet and my breakfast was paltry, so I walked (stumbled) away from the experience, (eventually) exhilarated and breathless. While I’m not so confident in my stomach’s behavior riding shotgun, I’m fully capable of driving one of these things and driving it fast, thank you very much.

Fun fact: An 8/10 equates to 80%, which, on Rotten Tomatoes, is a Certified Fresh score. This means that if I was in an action film, it would likely be a success and I’d be a reliable lean, mean, cinematic-fighting machine.

Action movie catchphrase to describe the experience: “Pump the breaks…or not!!!”

This final element of the trip was also perhaps the highest hurdle to jump in terms of cementing my action star reputation. I was treated to a hand-to-hand combat stunt experience coordinated by the stunt team behind Hobbs & Shaw, including Stunt Coordinator Chris O’Hara. It was a sweat-dripping, elbow-throwing, head-butting hoot (that was recorded and intended to resemble a scene from the movie!) that required memorization, some physical prowess, and, perhaps most importantly, dramatic acting. I had the first two parts down: I’m a frequent trivia-goer who can recall random, otherwise useless details at the drop of a hat, and I’m somewhat limber thanks in part to the exercise I get from my mimosa-driven kickball league. 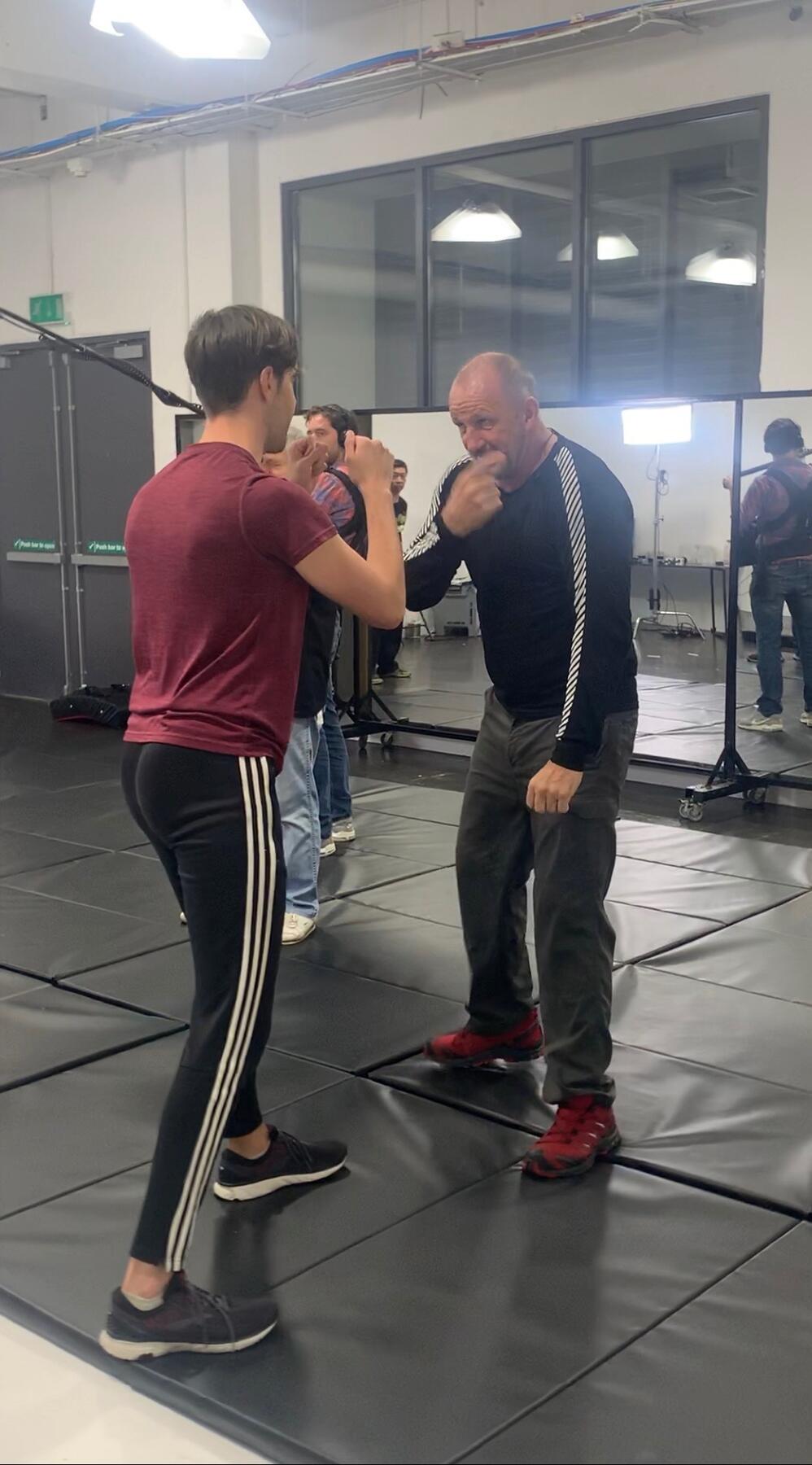 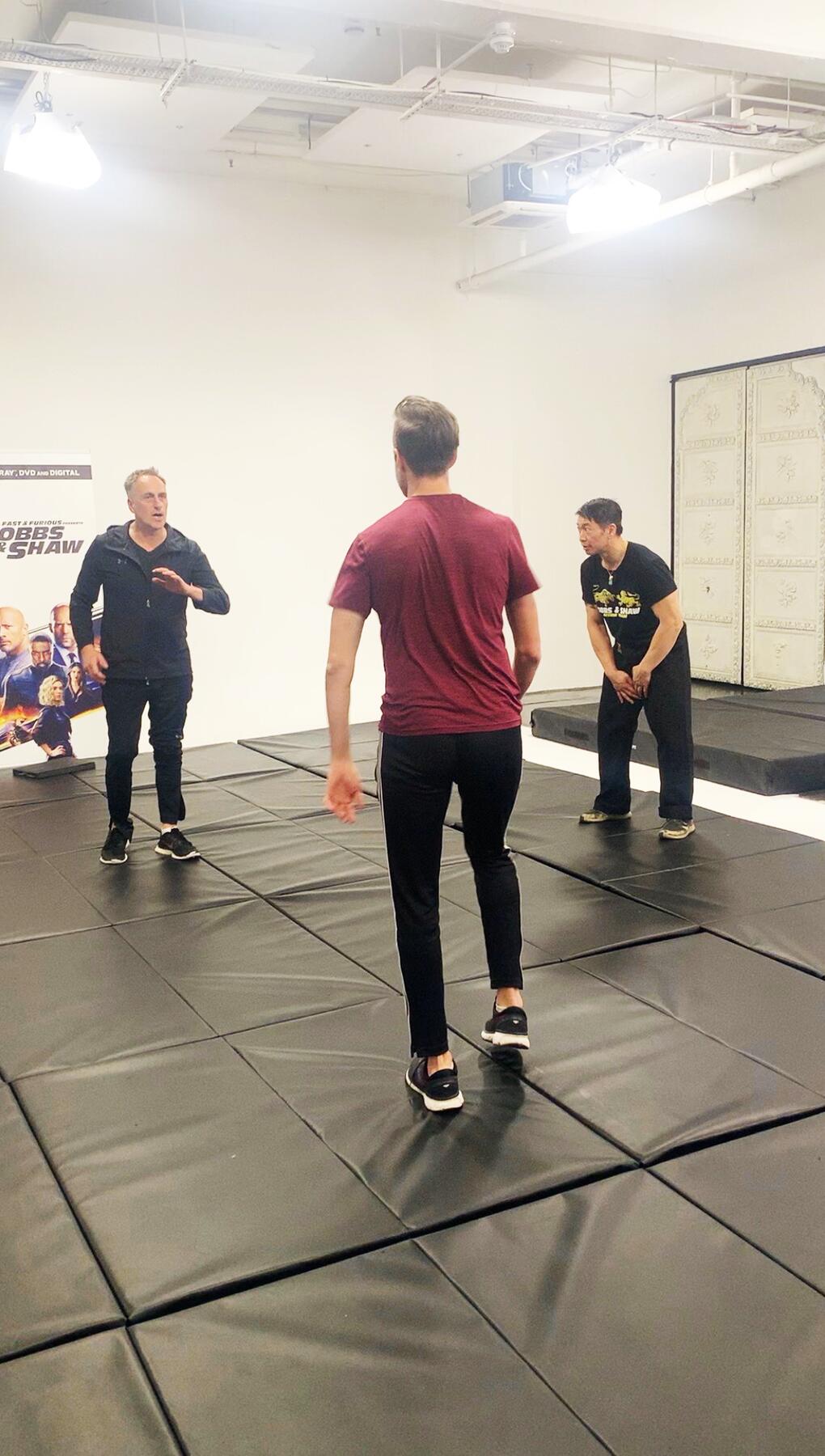 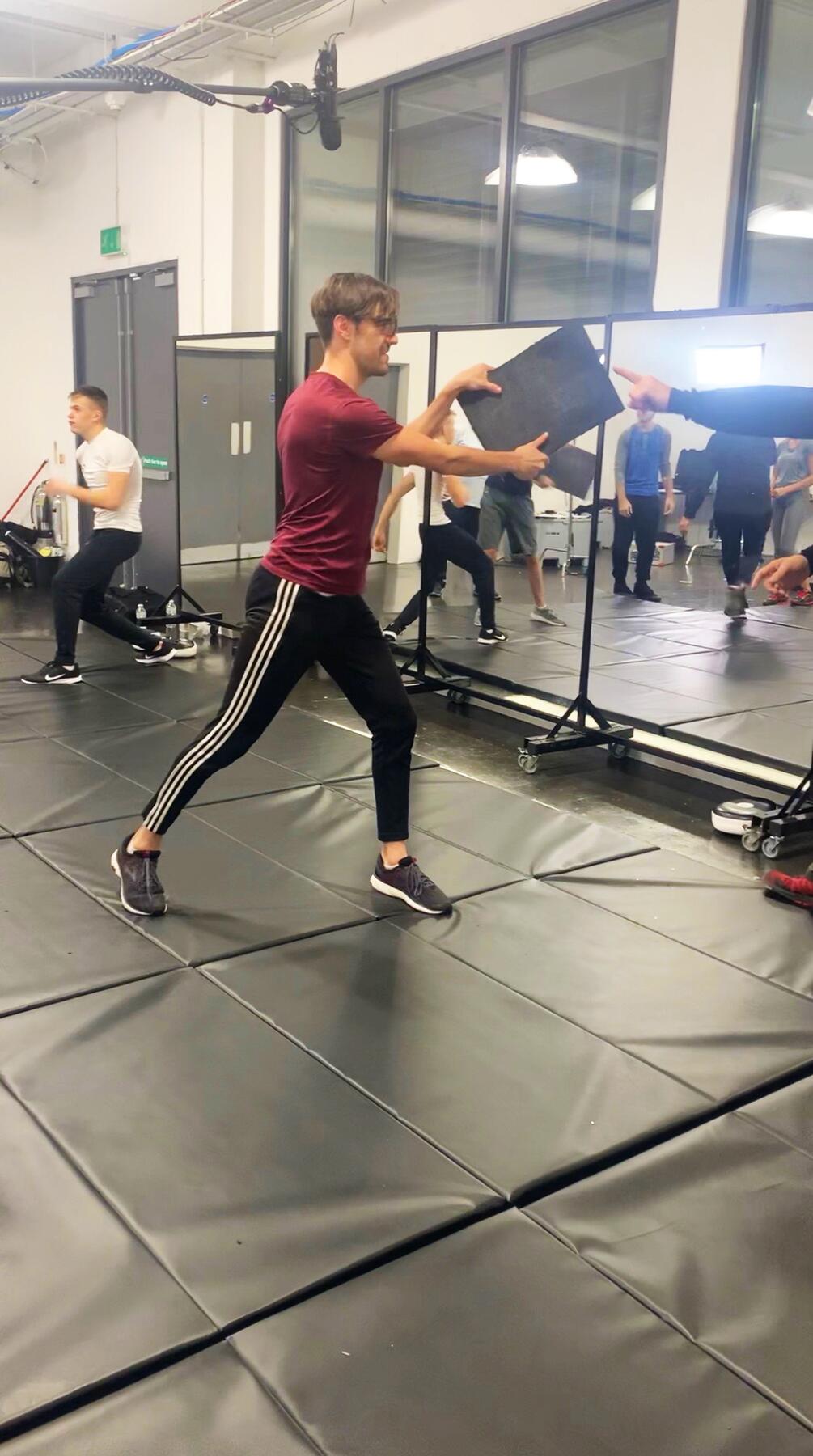 The dramatic acting, though, proved to be the true test but I think I nailed my (only) line—“I’m an ice-cold can of whoop-ass”—which is also uttered by The Rock in one of the film’s best scenes. In a surprise turn, I was then given the opportunity to speak my own line, which I came to after deciding that belittling the opponents by brushing them off—“Pffff, pah-lease”—was the best route to go. I think this part is better shown rather than told.

Action movie catchphrase to describe the experience: “Don’t mess with the best, or you’ll be hanging with the rest…of the men in this room who messed with the best (me).”

While I’d like to say I’m coming soon to a theater near you, I can’t make any guarantees. What I can say more confidently, however, is that London is a city where adrenaline-junkie tourists can get their fix. I can also say with certainty that Fast and Furious Presents: Hobbs and Shaw, which was partially filmed in London, is out now on Blu-Ray, DVD, and digital. And if you’re looking for a testosterone-fueled rush and don’t have time to travel to London and/or get out and experience any of the above-mentioned activities, I give it 5/5 stars. Fair warning: watching this movie may give you a sense of wander- and/or bloodlust.