People living with disabilities have built their own self-sustaining community and brought life back to a small Bohemian village.

Bohemia, part of modern-day Czech Republic, is a fairy-book land of turreted castles and stately monasteries, sunflower meadows and ancient pine forests. The Bohemian spirit is alive and well in Neratov, a formerly abandoned village that has rebuilt itself as a popular tourist destination and self-sufficient community where people with disabilities live life on their own terms.

“I couldn’t be happier. I live here, I work here, I have food on the table. I can go hiking or swimming whenever I want,” says 37-year-old Kvétoslava. For someone with learning difficulties who ended up homeless and starving on the streets of Prague, such freedoms are nothing short of life-changing.

Kvétoslava is one of 250 residents of Neratov, 80% of whom are living with disabilities. They have all chosen to make their home in this small, traditional village with a distinctly Alpine feel because of the community they find here–full of likeminded spirits and practical support. It’s also rather beautiful. Hansel and Gretel cottages nestle in a green valley, spindles of smoke curling skywards. Around them, a stream cascades over pebbles and the Eagle Mountains soar.

There’s also pretty much everything you need from a village. There is the school with facilities to support all kinds of physical and learning disabilities, a grocery and souvenir shop (with all crafts produced by residents), a state-of-the-art microbrewery, pub, and café. A vast market garden overspills with crops of glossy spinach, beetroot, and beans–they’re headed to the pub kitchen to satisfy the cravings of hungry travelers. Czechs, notoriously fussy regarding lager, have embraced the golden pints brewed in Neratov, with pubs across the country stocking the village’s Profit beer.

It’s almost the socialist ideal: a self-sufficient community raising its own funds to plow back into development initiatives decided by a committee. Some kind of naïve pipe-dream, surely? Not at all. Neratov has been doing exactly that for the last 10 years. What’s more, the majority of these decision-makers are people living with disabilities.

Bohemia first originated as a kingdom during the Roman Empire, its name later synonymous with a certain kind of laid-back cool. The reality was often anything but. During World War II the Eagle Mountains became part of German-occupied Sudetenland. At the time, Neratov was home to almost 2,000 people. Overlooking the village was an imposing church, a sacred site of ancient pilgrimage. But then the Red Army came, and the church was set alight. Its wooden roof burned and crumbled as villagers cowered in their homes.

At the war’s end, German citizens were forcibly and violently expelled from the region. You can still stumble over the graves of those who weren’t able or nimble enough to escape. Neratov was left with just two permanent residents. Around them, houses, churches, and communities disintegrated.

But worse was yet to come. In 1948 a communist coup hammered the country with an iron fist, ushering in more than 40 years of brutality. Religion and private ownership were outlawed, workers were forced into viciously long hours to meet production quotas. Neighbor pitted against neighbor as the Secret Police bugged homes, imprisoned or “disappeared” people, ruthlessly purging the country of those deemed enemies of the regime.

For people living with disabilities, it was especially terrifying. Already shunned by society, rumors spread that disability was contagious and to be deeply feared. Thousands of people were forced away from their families to makeshift asylums in isolated monasteries and castles.

A Time for Freedom

The Velvet Revolution finally came in 1989. The communists were toppled, and the country could breathe again. In the Eagle Mountains, a young Catholic priest named Josef Suchar took on the parish near Neratov. During a ramble in the mountains, he came across the ruined church and empty village.

“I remember standing in the middle of the ruins, looking up and seeing only sky above me,” he says. “The revolution had just happened. There was euphoria. It felt like we could change anything and right the wrongs of the past.” That day Josef made a vow to help create a community where people living with disabilities could live away from institutions, free to make their own decisions and set their own path.

But first, that path would have to be built.

“When we first heard Father Josef’s plans to rebuild the village we thought ‘we’d like to see the fools who get themselves involved in that!’” laughs Jana Nemcova who, since she and her family arrived in 1990, has adopted and raised six previously institutionalized children. “But he is very persuasive. Within a year we had moved here. I had worked in a children’s home, so I knew all about those children who never got the chance to leave. Here we had the support and the space we needed to offer our family to these children.”

Josef encouraged his parishioners to help rebuild first the church and then the village itself and, just like in a fairy-tale, brick by brick they rose to the task. “We wanted to bring life back to this place but we weren’t looking to rebuild the past,” he says. “We wanted a new future. We wanted people to come and live here again.”

As the community grew, word spread among educational and medical institutions, where practitioners began recommending it to suitable clients. Soon, increasing numbers of people wanted to move here. The plan was working.

The Neratov Association was formed to plan a village roadmap, providing for its own needs when the country at large wouldn’t or couldn’t. A cross-section of community members sits on the committee and vote on the direction they want to see. This has so far resulted in the school, sheltered accommodation, and income-generating ventures such as workshops to produce goods to sell in the village shop and to companies. Two Christmases ago the community took part in a Facebook Live event, showing off their wares throughout the nation and earning thousands of korunas in commissions.

The key focus now is tourism and the income it can bring, hence the pub and shiny new microbrewery. They plan to expand—always ambitious, the Association has plans for a respite center, a new hotel, and a new range of handmade soaps and cosmetics. Prior to the coronavirus pandemic, the project had been so successful with its tourism ventures that 40,000 people visited every year.

Twenty-six-year-old David spent his life in children’s homes and psychiatric institutions before moving to Neratov. He now works in the brewery. “Meeting new people means I can learn new skills to help me lead an independent life. I’d like to never leave this place.”

Looking around this beautiful little village, it’s easy to see why. The geraniums are in full bloom. It’s peaceful, save for the odd bicycle bell or chicken cluck. All this within a protected national park long popular with Poles and Czechs for family hiking, cycling, and skiing trips, but little known outside these countries. 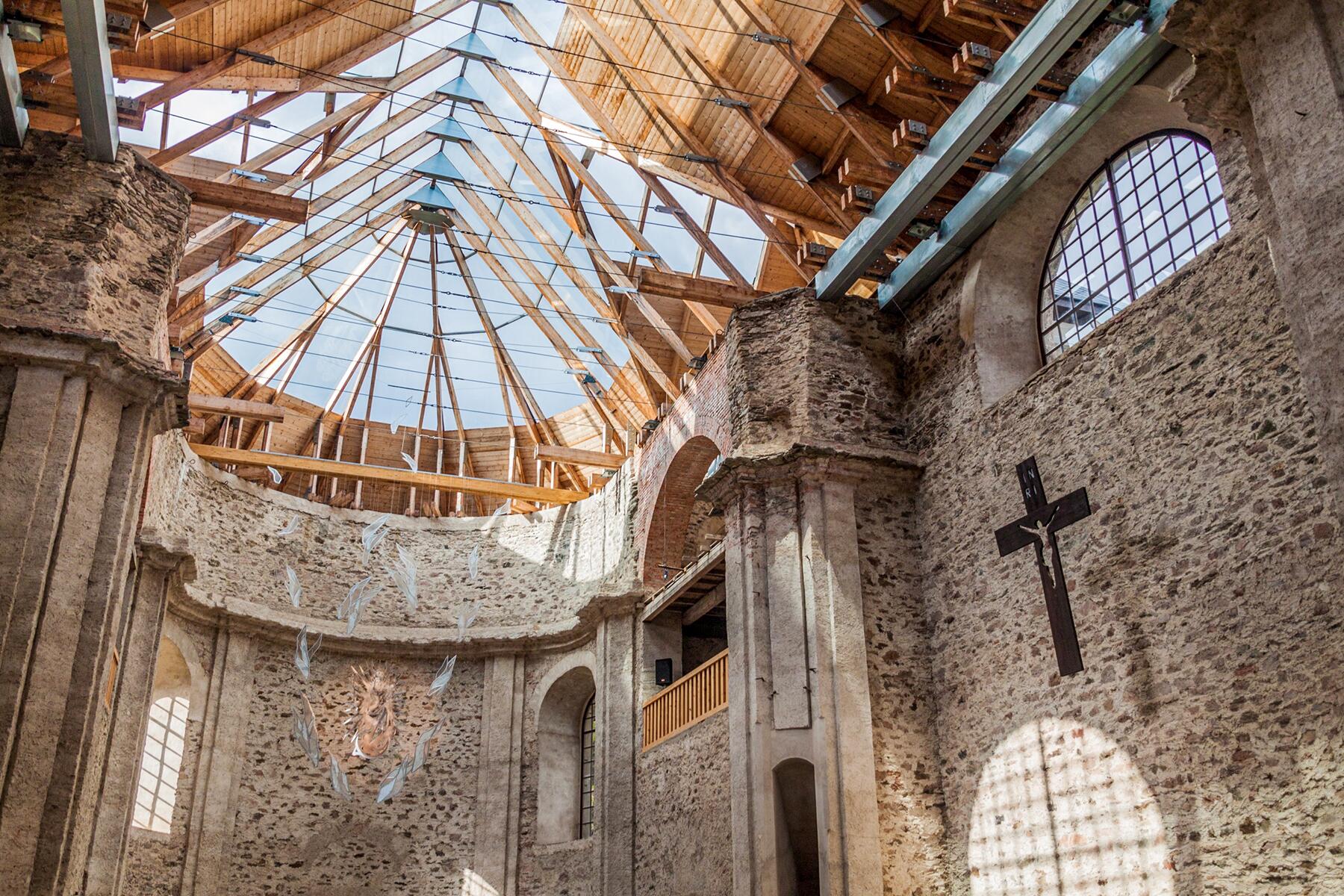 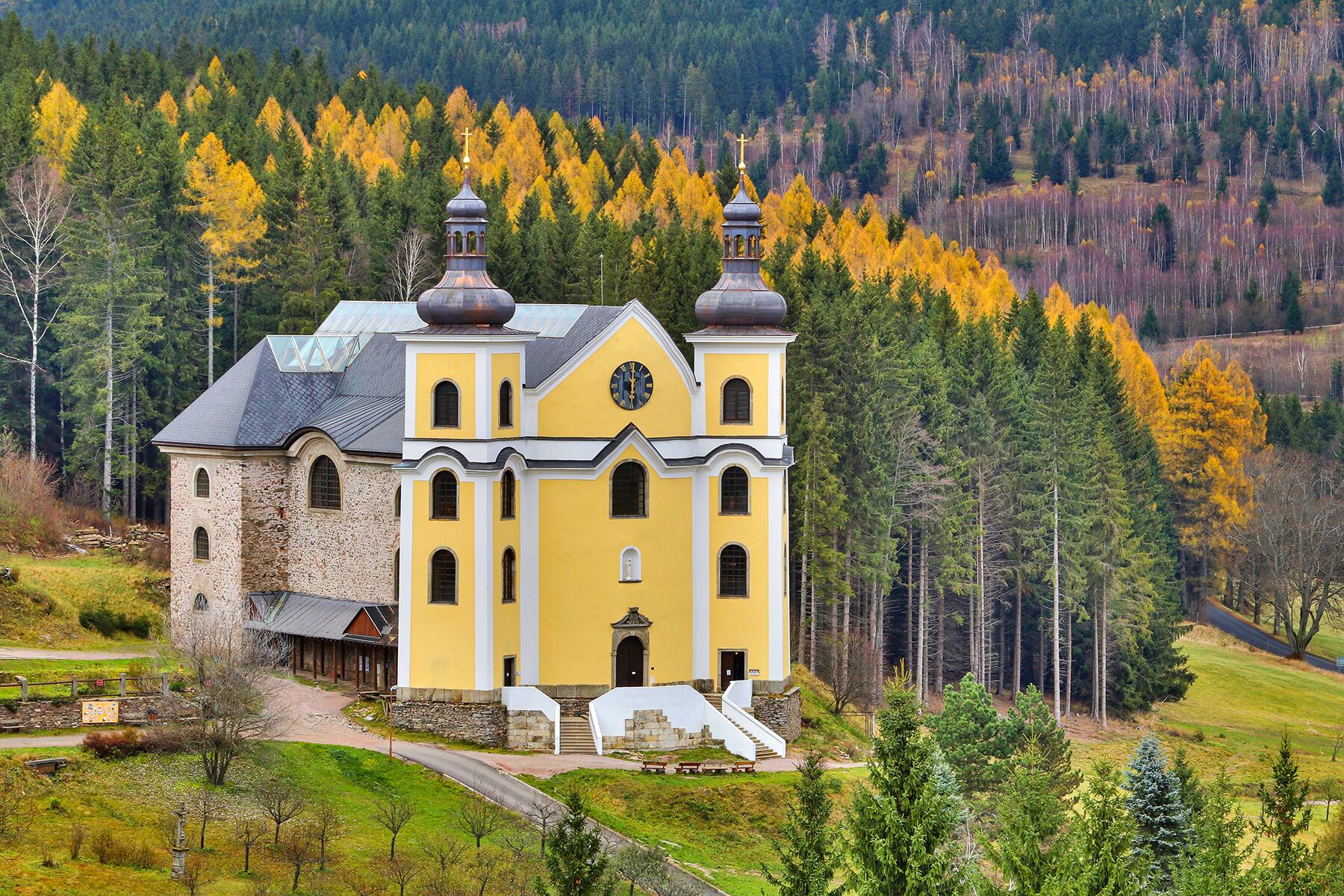 There is also that church. True to their word, Father Josef and the community have completely rebuilt it. It really is a stunning achievement. In deference to the day Josef first stood in the ruined building appealing to the open sky above him, the wooden roof was never replaced. Instead, it is made of glass, leaving the inner sanctum of the church open to the skies, while providing sanctuary and shelter underneath. There could perhaps be no better metaphor for what Father Josef and the villagers of Neratov have achieved

This village was not created in the socialist model.  It was made by hard work and the vision of the residents. They have decided to take the income generated to expand, which is what good businesses do.  If they waited around for the government to do anything, it would still be in ruins.