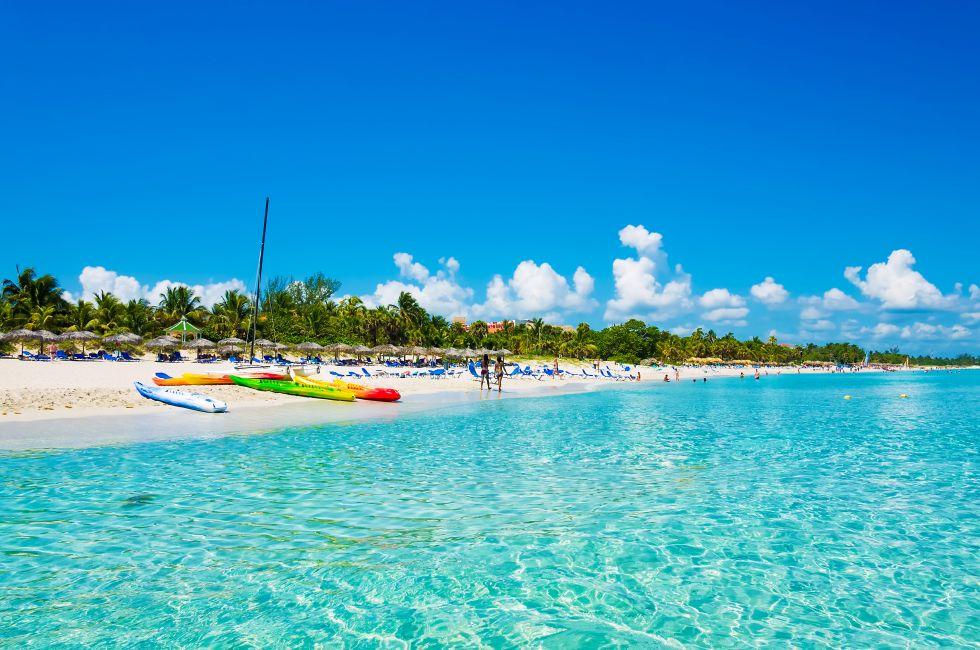 From the westernmost, pristine strands of María la Gorda to Varadero's internationally popular white-sand beaches; from the castaway islands of the southern Archipiélago de los Canarreos to the vertebral Cordillera de Guaniguanico—Western Cuba holds a wide range of geographical treasures. Both the Valle de Viñales with its distinctive mogotes (limestone hillocks) and the bird-filled wetlands of the Península de Zapata are quintessential Cuban destinations.

Western Cuba's provinces of Matanzas, Artemisa, and Pinar del Río, along with the Municipio Especial (Special Municipality) Isla de la Juventud, offer attractions that range from the traditional tobacco plantations of Viñales to the cosmopolitan beaches of Varadero to the wilds and wetlands on the Península de Zapata. In addition, pristine beaches and nonpareil diving opportunities can be found off—among other spots—Cayo Levisa, the Península de Guanahacabibes, Cayo Largo, and the Zapata Peninsula.

Traveling west from Havana, there's little in the way of distraction until you reach Las Terrazas nature reserve in tiny Artemisa Province. Next up is Pinar del Río, Cuba's prime tobacco-growing country. The dramatically scenic Valle de Viñales (Viñales Valley) is famous for its curious mogotes (hillocks), freestanding limestone formations from the Jurassic era, sheltering huge caves surrounded by hoyos (holes), valleys, or depressions filled with rich red soil ideal for the cultivation of tobacco. Far to the west, the Península de Guanahacabibes is a UNESCO-classified nature preserve on the Straits of Yucatán and a prime diving and snorkeling site.

To the east of Havana, you pass through the country's newest province of Mayabeque—notable only for its workaday sugar refineries, offshore oil wells, and rum factories—on the way to Matanzas Province. The capital city, Matanzas, once dubbed "the Athens of Cuba" for its artistic and literary lights, is now enjoying a slow, but steady renaissance after decades of neglect. To the east of the city is Cuba's premier beach resort—Varadero, a glittering, sandy paradise studded with all-inclusive, resort hotels. On the slender Península de Hicacos, Varadero has yacht marinas, a golf course, discotheques and cabarets, and miles of silver sands. The once-prosperous town of Cárdenas, southeast of Varadero, is worth visiting to gain some insight into Cuba's recent political history and to witness some of its former architectural glories.

On the far south shore of the province, the Península de Zapata is an ornithologist's and diver's paradise, with wildlife-rich wetlands, sandy beaches, coral reefs and limestone sinkholes filled with brightly colored fish. Playa Girón, at the mouth of Baía de Cochones (Bay of Pigs), attracts divers, too, as well as Cold War history buffs.

Almost 100 km (62 miles) south of the mainland lies the Isla de la Juventud, the largest island in the Archipiélago de los Canarreos. Apart from some pre-Columbian cave paintings and a few beaches and dive sites, the hard-to-reach island is not a major tourist destination. With its history as a penal colony, the island's major interest is political, specifically the Presidio Modelo (Model Jail), where a young Fidel Castro spent 18 months and penned his famous "La Historia me absolverá" ("History will absolve me") speech. The main tourist activity lies offshore, to the east of the main island, on Cayo Largo, with its own airport and a string of all-inclusive beach resorts.

Recommended Things to Do in Western CubaSEE ALL

Find the perfect tours and activities in Western Cuba.

Find the best food tours and activities in Western Cuba.

Casas Particulares Are an Authentic Alternative to Hotel Stays in Cuba
Travelers interested in seeing a more intimate side of Cuba should consider booking a unique homestay experience.

How to Travel to Cuba
Here&#39;s everything you need to know about visiting this enchanting Caribbean island nation.

Everything You Need to Know About Cruising to Cuba
How long before mainstream cruise ships are able to sail Cuba remains to be seen, but in the meantime, here are four reputable companies that will get you there this year.