Just when you thought you’ve seen it all, you stumble upon something that makes you marvel at how weirdly interesting this world is.

The lights shone bright and the stage set high in the fighting arena I walked into. Two large males stepped into the ring. They looked at each other with a vicious glare. The two fighters weren’t wearing gloves or protective gear. An anxious crowd watched with a loud intensity as bets were placed and money was at stake. Then, one male inched forward and butt his giant horn at his opponent. The crowd went wild.

This was a Beetle Fighting Show, and I got a front-row seat.

I was walking through the night markets in Pai, Thailand when I saw a group of locals huddled in a circle yelling various things in Thai. Being the curious cat that I am, I craned my neck to see what was going on. I still couldn’t see anything, so I squeezed my way through the crowd. 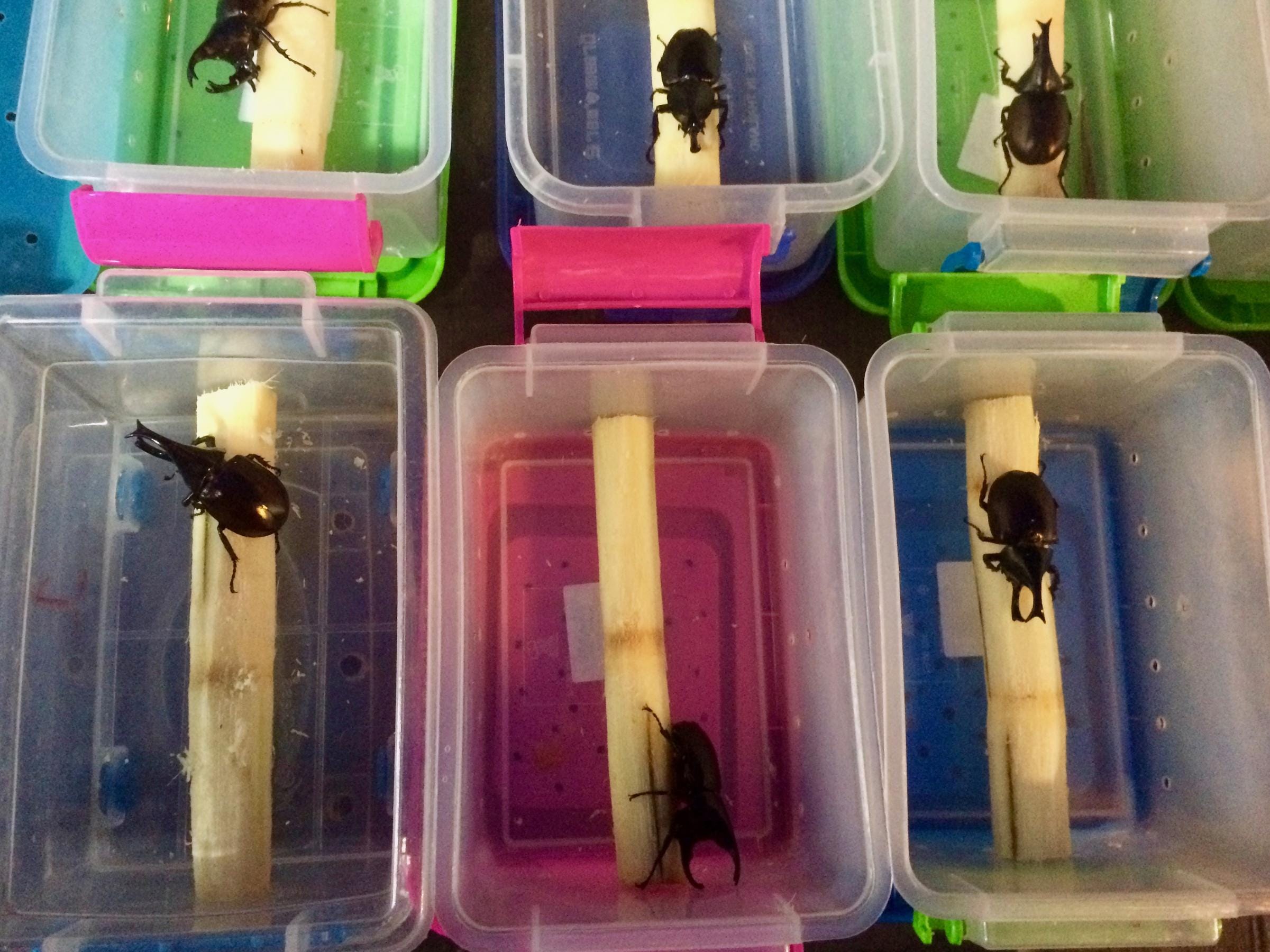 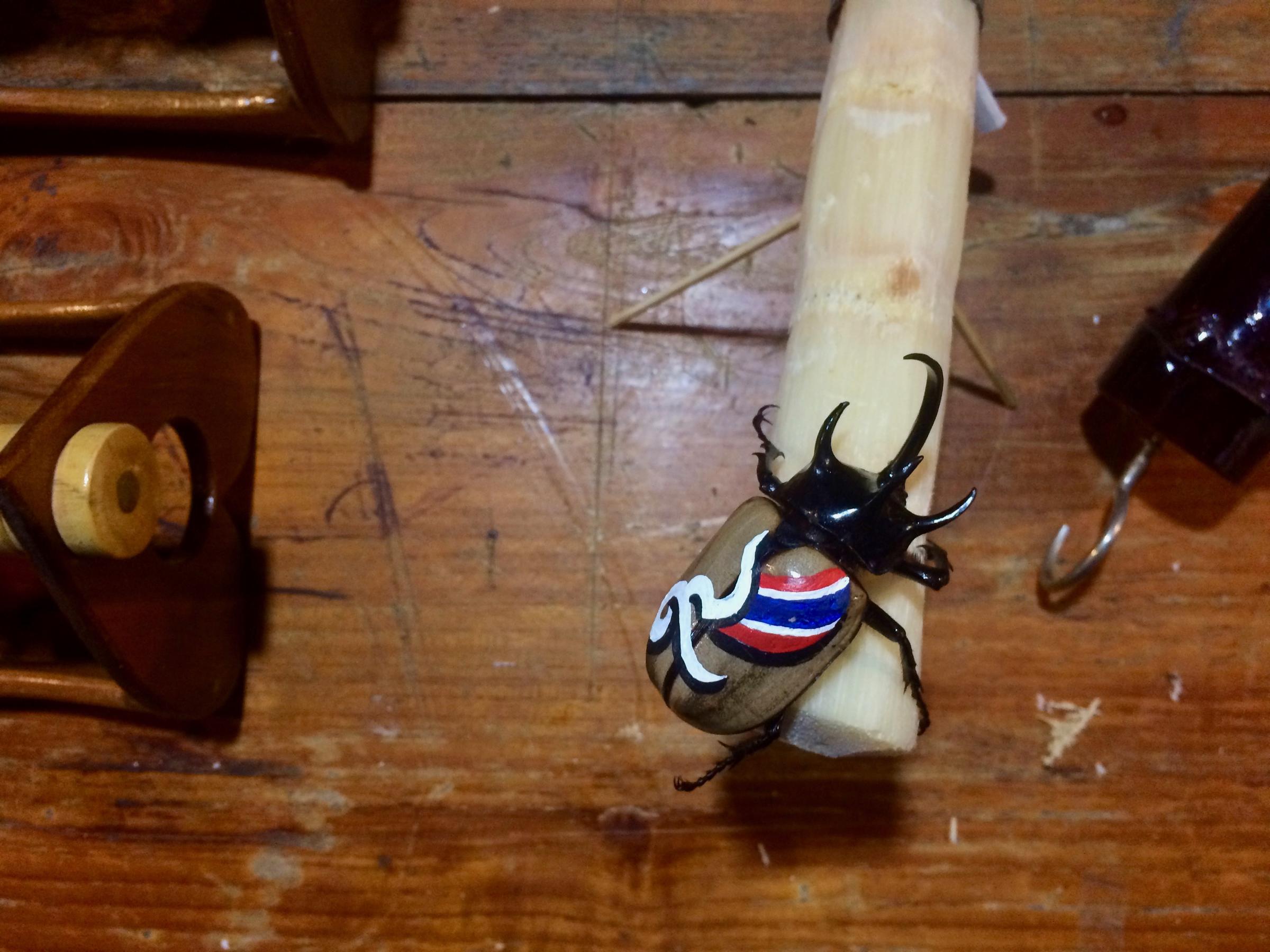 At first, I didn’t understand what I was looking at: there were rows of enormous rhinoceros beetles perched on logs and those logs were on display in individual glass containers. People were observing the tables of beetles so closely, it almost seemed like a science fair. Or maybe they were souvenirs? None of the beetles moved, and people seemed to be bargaining for them. They certainly didn’t look real. They were unusually large; some were the size of tennis balls. Some had sharp pincers that could have been finely carved. Some of the beetles’ sleek, glossy shells were painted.

And no one seemed to speak English—which makes sense because I was in the Mae Hong Soon province of Northern Thailand. I walked up to a man who was painting the outer shell of a beetle and hoped he could give me some insight into the event.

The Thai man looked at me with confusion. He obviously didn’t understand me.

I looked around and spotted a banner that read “Beetle Fighting Show.”

Well, there we go. Were these beetles real? I poked my head up close to one of the containers, looking for any sign of life from this motionless creature. I got nothing. I stood up straight and a Thai man came up to me. He used his hands to motion something. It seemed like he was asking if I wanted to hold the log that the beetle was perched on.

“Uh…no, thank you,” I said as politely as I could, as I didn’t know if rejecting holding a beetle was considered rude. “What time is the fight?”

I tried to get more out of him about this competition, but we didn’t seem to understand each other. All I got was that he was very excited for 8:30 p.m. to come around. And so was I.

As I walked around the event, I noticed a few men taking selected beetles out of their glass containers and comparing them with each other. I later learned that these were the beetle owners or trainers who were comparing the insects for size and character. Once two beetles match, they head to the stage and bets are placed.

A raised, square platform had a large wooden log on the center of it. I noticed that the log had holes in it. The owners sat on top of a step ladder at either end of the platform and placed their beetles on top of the log. 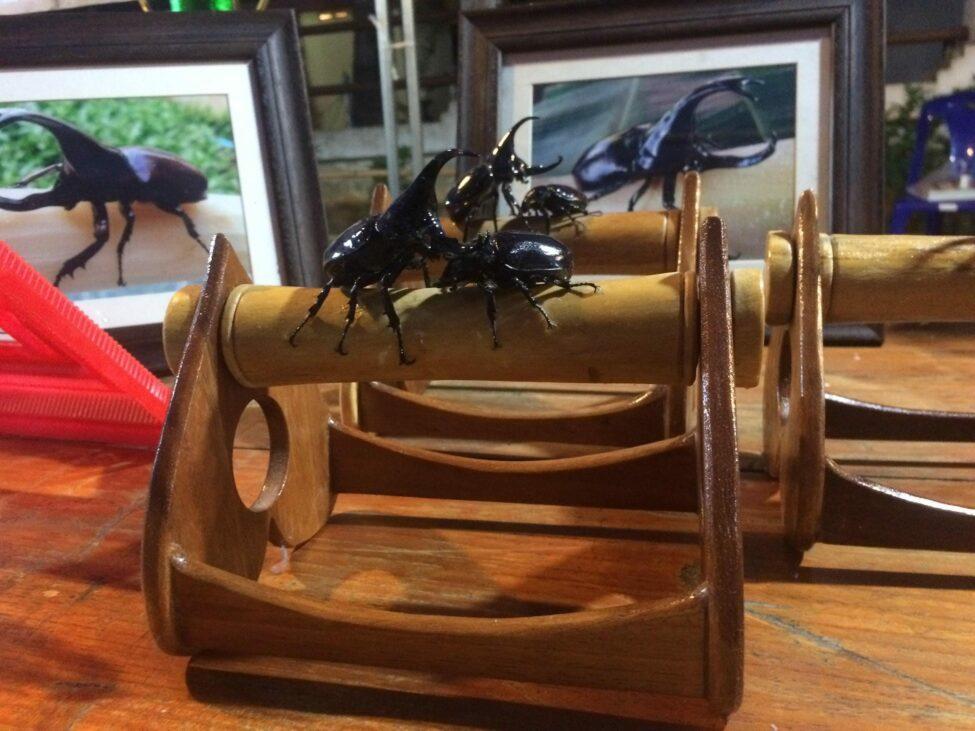 Alright let’s see some action, I thought to myself. These rhinoceros beetles still hadn’t proved any signs of life to me.

The trainers encouraged the beetles to fight by tapping around the insect’s legs until one of them decides how annoying this human is being and takes a step forward. Then it’s on.

I was utterly bewildered at the entire scene. The crowd got as close as they could to the raised platform and cheered and yelled so loudly that you would think it was an actual UFC event. The energy was incredible. You could smell the sweat and hear the roar of every member of the audience.

But I was still confused. How does one beetle claim victory? Do they fight till the death?

“Isn’t this the strangest thing you’ve ever seen?”

I stuck around and learned that the inside of the log contained a female beetle who was emanating her glorious pheromones into the world. These pheromones seeped through the holes of the log with the intention to motivate the males to fight each other. One beetle becomes champion when it breaks its opponent’s horn or causes it to flee. It can take anywhere up to 12 rounds to crown a winner.

The most action I saw was a little head butting here and there. Other than that, these beetles didn’t seem interested in fighting over a lady. I found that very mature of them.

The locals were obviously very excited about this event. Beetle Fighting Shows happen once a year in Northern Thailand and participants are usually low-income farmers. The beetles are found in the jungle and sold for about 50 baht ($1.50 USD), whereas a champion beetle can be sold for 3,000 baht ($95 USD), according to Aljazeera.

There were a few other backpackers watching with the same dumbfounded look that I wore, and we shared a “What’s going on?!” glance. 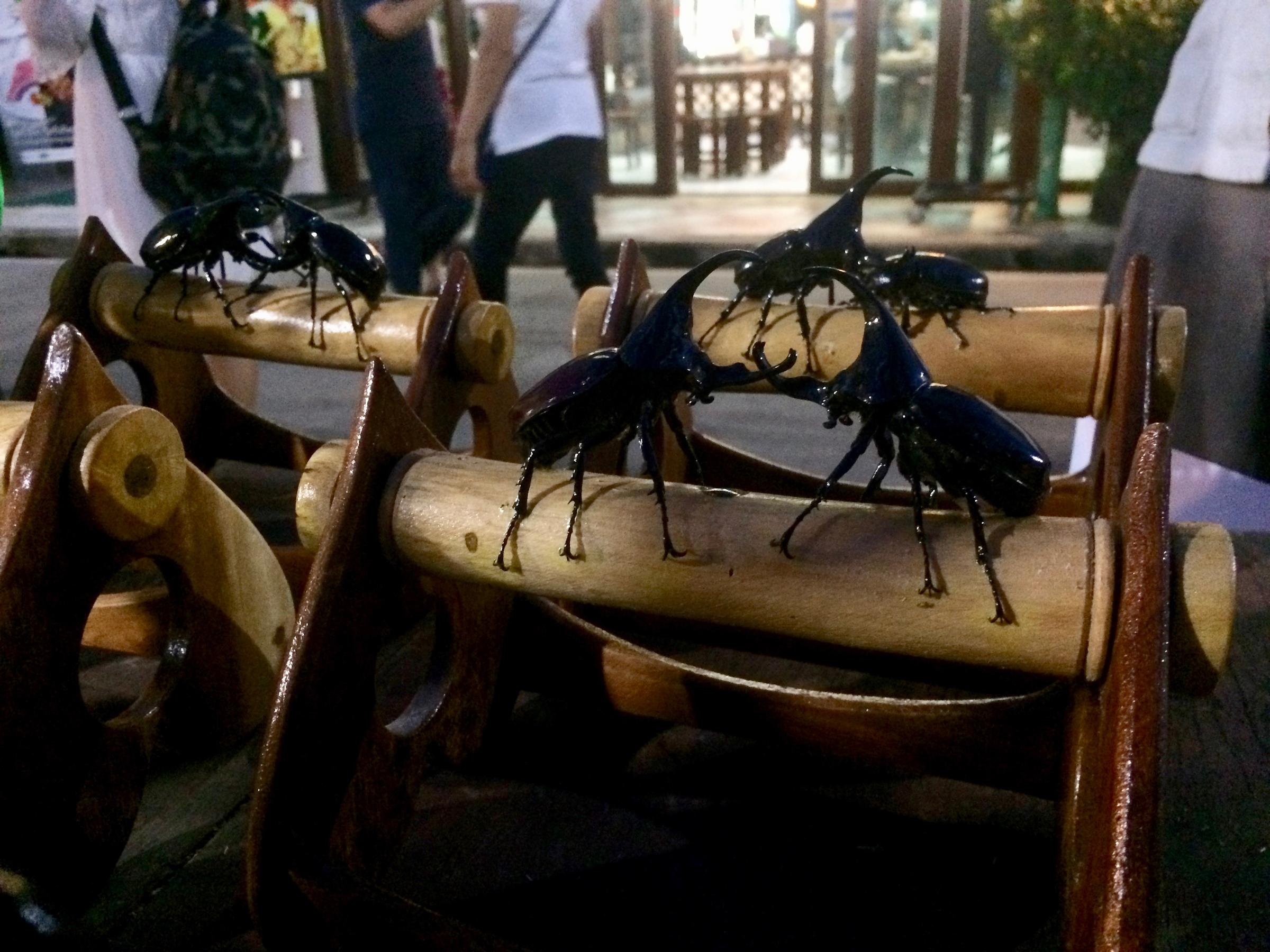 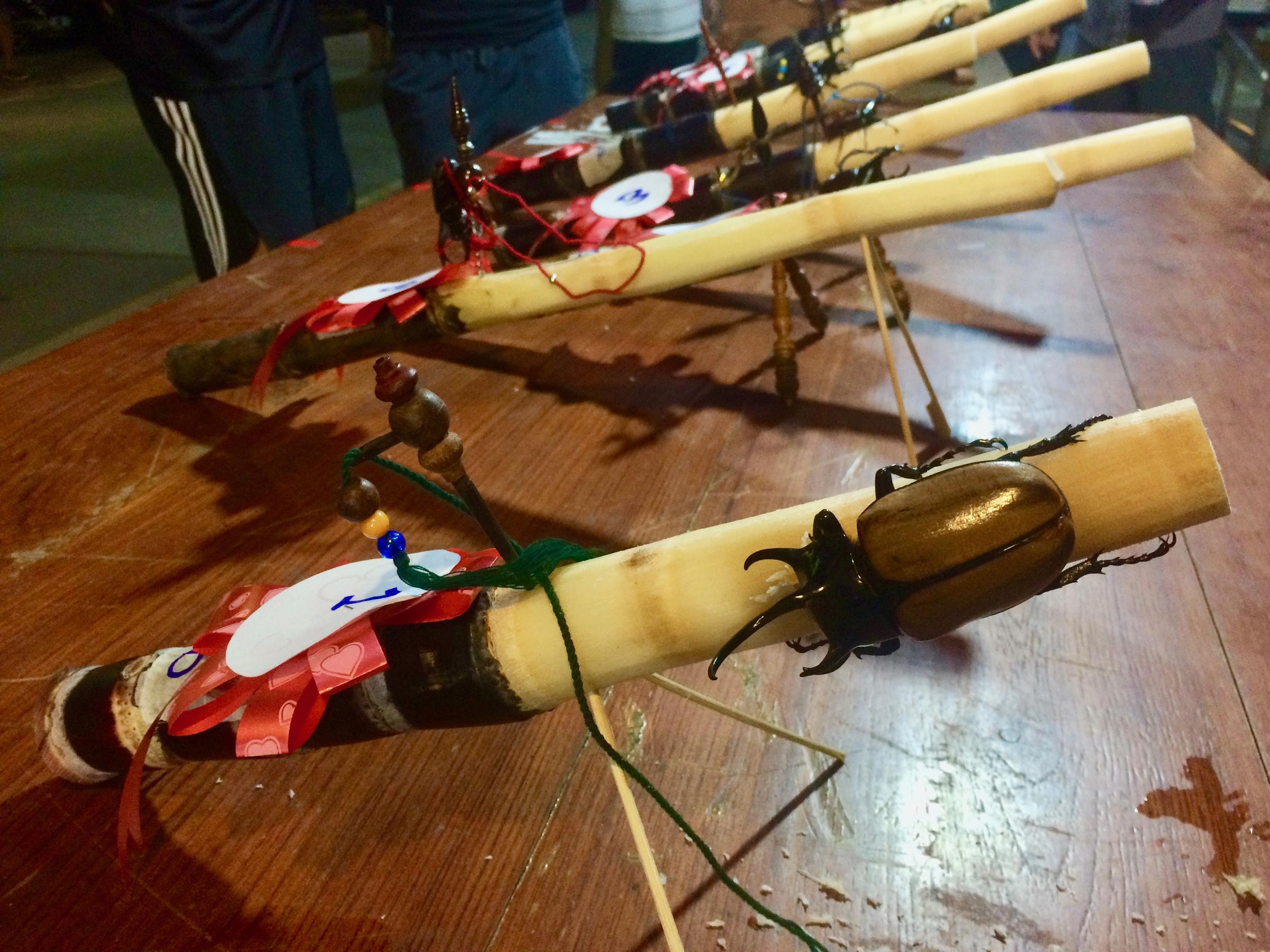 “Isn’t this the strangest thing you’ve ever seen?” a German girl asked me.

It’s definitely up there.

I walked away thinking about how oddly cool it was that I got to witness this local tradition.

Yes, it was a little strange, but that’s the beauty of stumbling upon these kinds of things while traveling. I still laugh at the thought that I watched a crowd of grown men cheer for two beetles who were essentially fighting over a woman. I can only hope the male winner got to be with his lovely lady beetle in the end.