In Tamil Nadu, a temple famed for size and detail has mystified archaeologists and inspired legends.

In southeast India, in the city of Thanjavur in the state of Tamil Nadu, sits a massive temple spotted easily from even a mile or two away.

The Brihadisvara Temple was built under Raja Raja Chola, a Chola emperor ruling over ancient Tamil Nadu, parts of what is now Sri Lanka, and much of what was Malaya from 985 to 1014 AD. A vision for the temple came to him in a dream while visiting Ceylon (Sri Lanka), and he ordered it built in honor of his reign, which was seen as a victorious one needing a grand temple to match the large size of the empire. At 216 feet at its highest point and carved completely of granite, it took 12 years to complete. It was finished in 1011 AD and is dedicated to Shiva.

Brihadisvara Temple is part of a group of Chola-era temples designated as a World Heritage Site. Each of “The Great Living Chola Temples” is built in a signature Tamil architecture style–high walls, a fort-like entrance, a moat (that is no longer there), separate rooms inside, long corridors, and paintings of Shiva on the walls. Though it shares similarities with the others, the Brihadisvara Temple stands out among the group for its size and architectural mysteries. 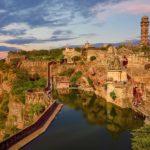 Historians and archaeologists have long wondered how exactly the temple was built. There’s no granite to be found anywhere nearby–not for at least 50 miles. Yet the temple is formed of 130,000 tons of it, often huge giant pieces of it that would be impossible for any human to move. There is no binding material, only interlocking stone–something never found in tall buildings today. Plus, it’s intricately carved, which is a difficult feat considering granite is such hard rock. Finally, there is a huge nandhi (the gate guardian of Shiva, resembling a bull) in front of the temple carved out of only one piece of stone. 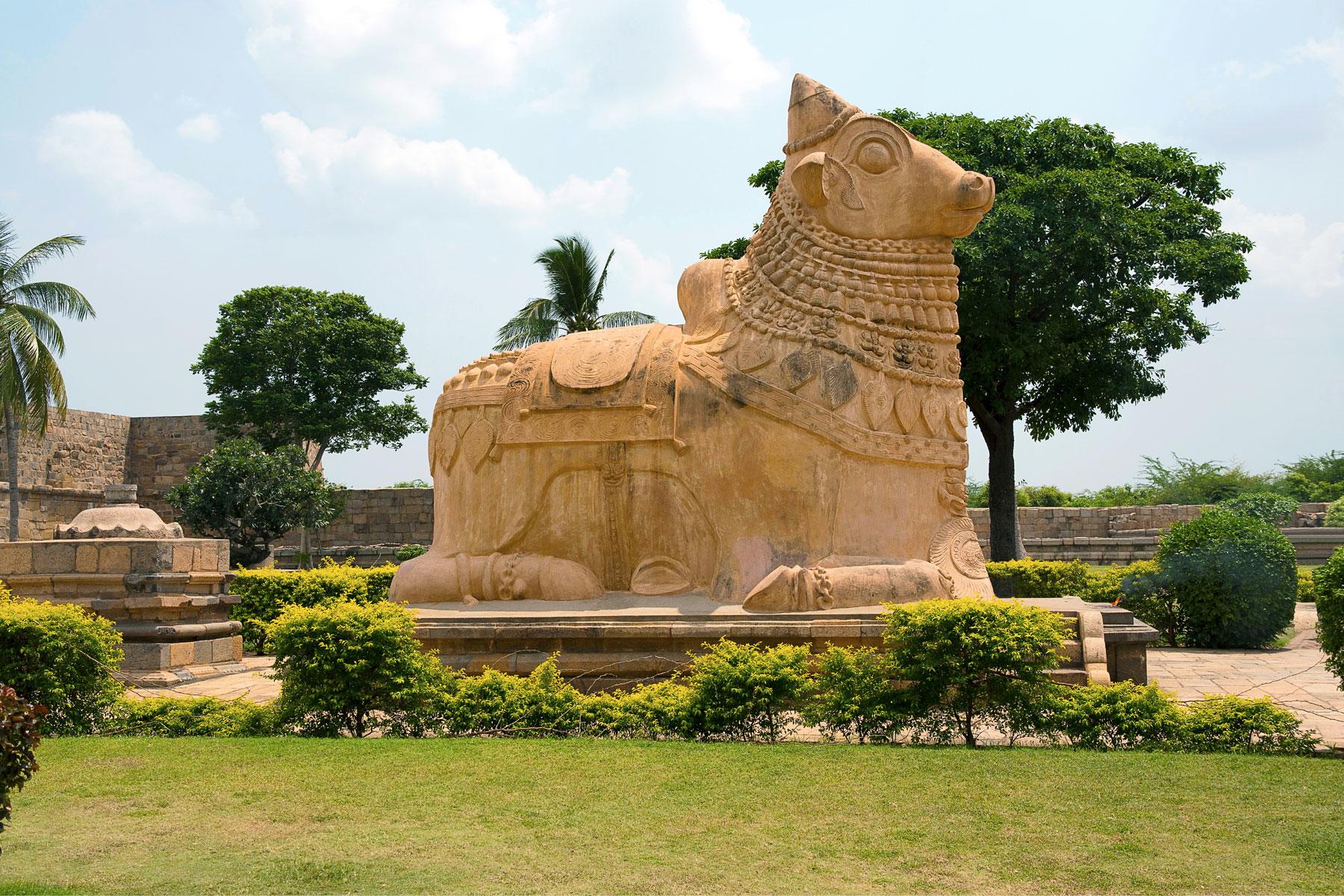 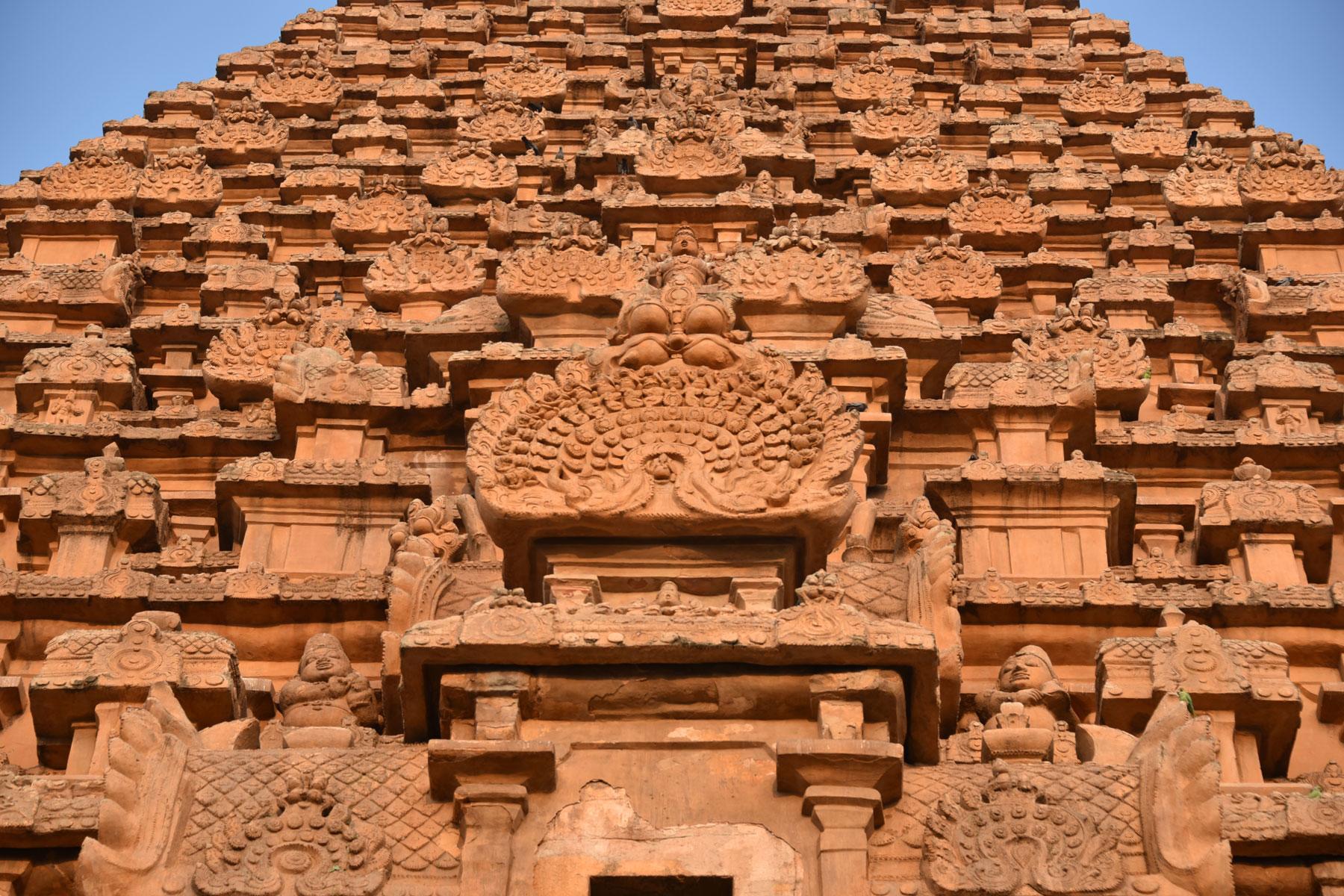 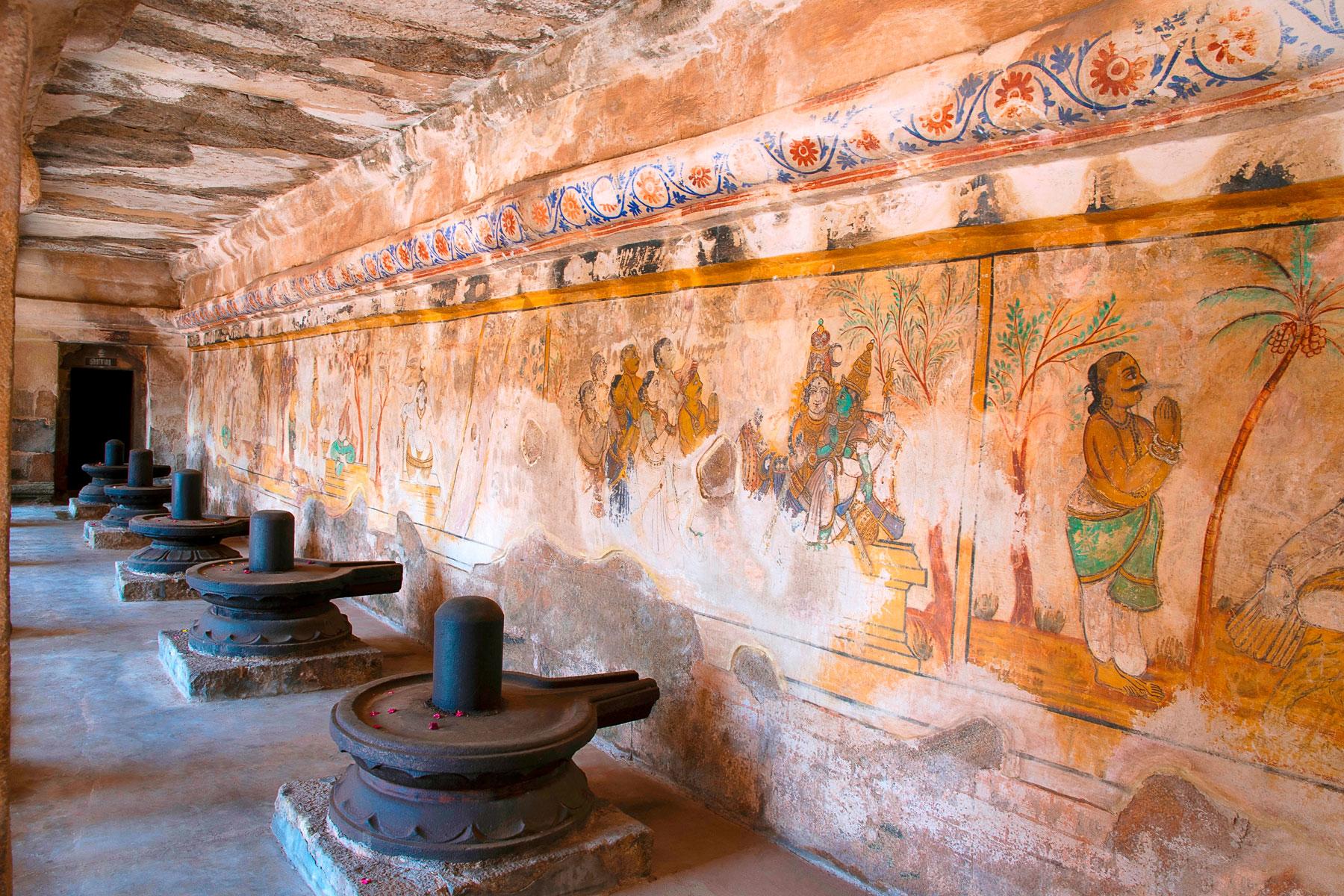 In speculating how the temple came about, numerous (fantastically incorrect) theories have been floated.

The temple is so impressive that early observers developed fantastical theories about its construction. Aliens, magic, and Lord Shiva were all credited. The truth is that it was built with the forced labor of thousands of captive elephants. It took more than 1,000 elephants to haul large slabs of granite to Thanjavur from 50 miles away. To cut the rocks, workers used an ingenious method of ancient engineering: making small holes in the granite then placing wooden plugs inside the holes. When it rained, the water expanded the plugs, causing the rock to break. 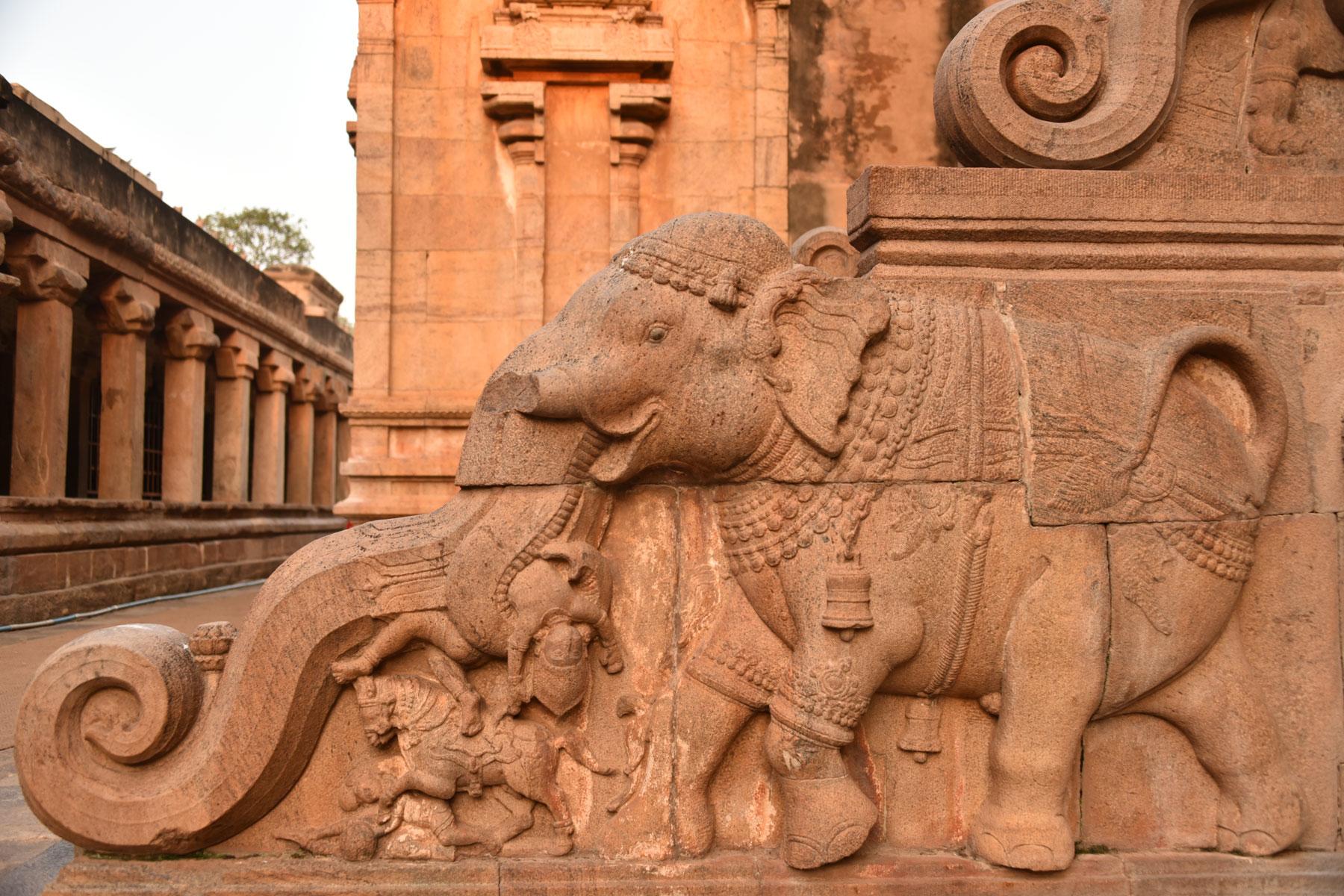 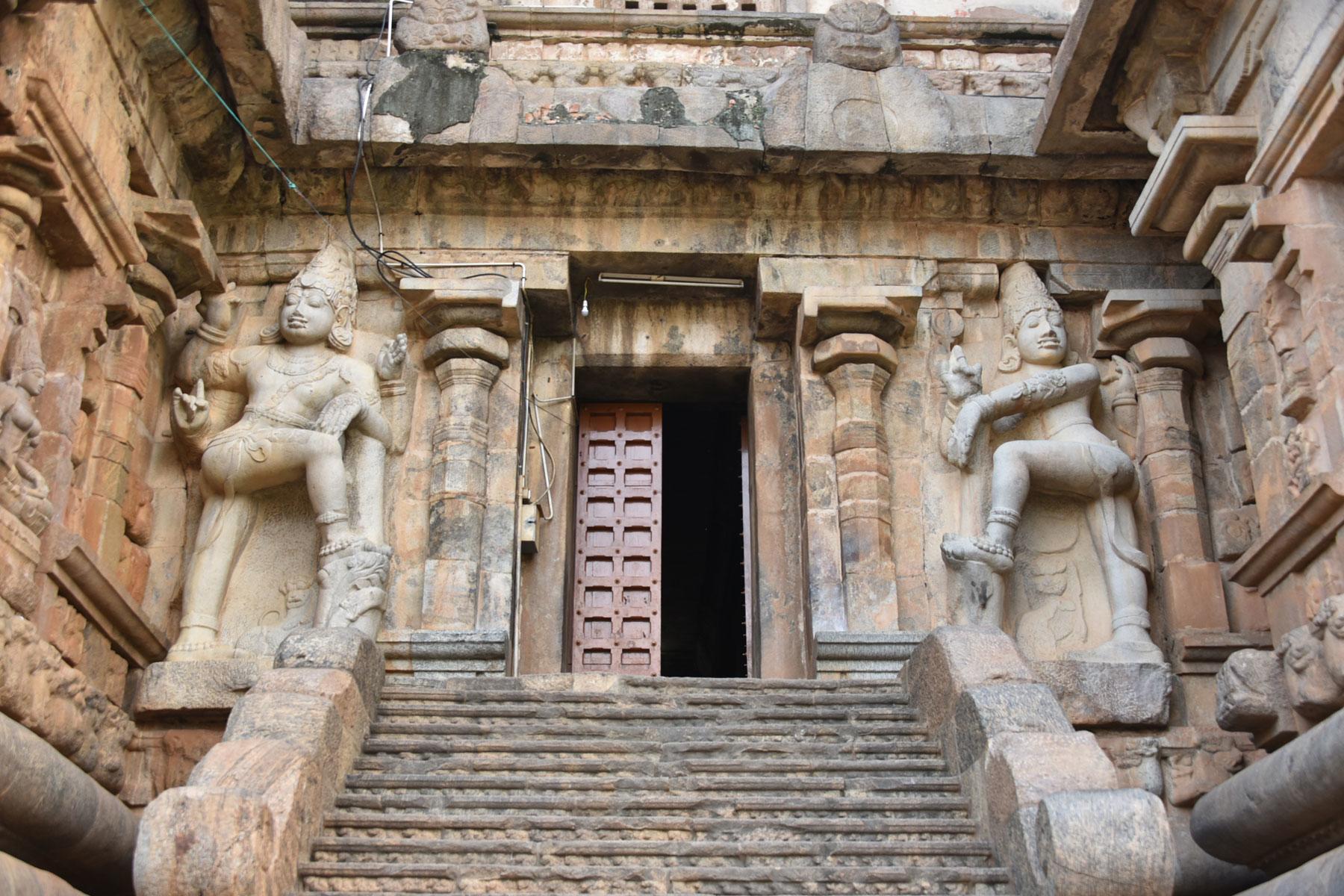 The Mahalingam—the stone on top of the tower—weighs 80 tons and measures 23 feet around and 9 feet high. Leading up to it are 14 stories of intricately sculpted images. Without cranes, a long ramp was made leading up to the tower, and elephants hauled the stone up to the top, assisted by men with ropes. Many people believe that the ball was placed on top to dispel bad energy and to help positive energy revolve around the temple, keeping those in it pious and grateful. The flow of Vedic energy is meant to be calming for worshippers, and those who come to worship at the temple walk in a clockwise circle throughout it. According to tour guides another popular legend is that Hindu sages recited a Vedic mantra that levitated the stone to the top of the tower.

The bull-shaped nandhi that sits outside of the temple is a 12-foot-high, 19-foot-long, 18-feet-wide carved piece of stone weighing 25 tons. Myth says it that it kept growing in size, and people feared it would outgrow the small pavilion where it sits. So, they put a nail into the back of it, and the growing stopped. 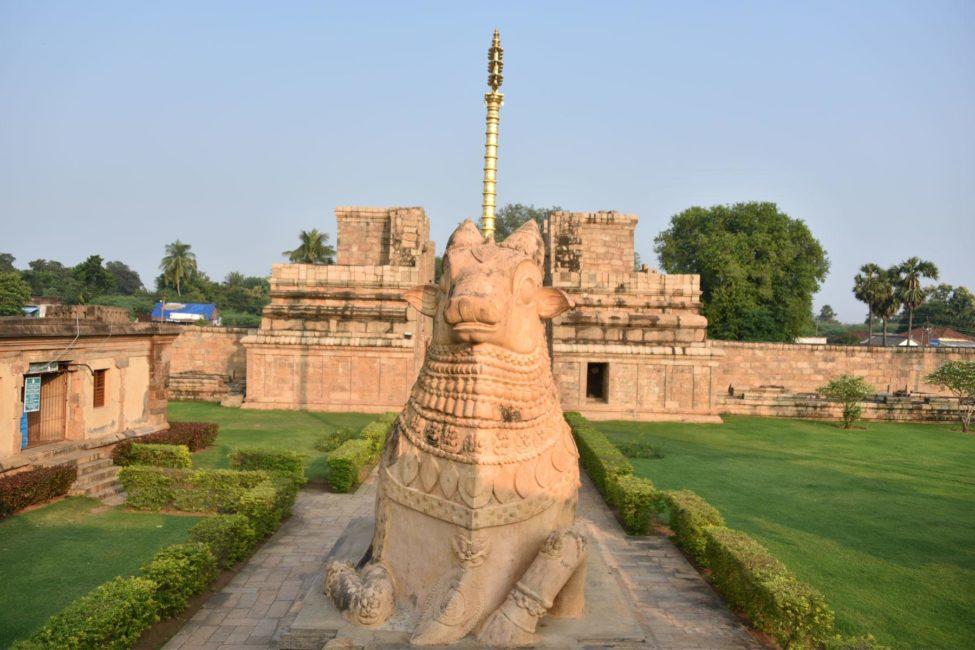 There are other less confounding, but still impressive features of the temple too. More than 100 passageways wind underground, leading to the Palace of Raja and other places throughout the city. They made it easy for royalty to visit temples on festival days without traffic or other disturbances. Some of the passages were closed off, meant as a safety precaution for the kingdom–if an intruder turned down the wrong passage, they would be stuck. The passages also helped the royal family and others escape if there was an invasion. However, most of these passageways are now closed to the public for safety reasons and have only been seen by archaeologists. Again there is a local legend, this one saying that certain mantras would allow access to secret passageways.

There are elaborate paintings across the walls of the temple too, in many cases more ornate than others from the same time period. They depict Shiva and important moments throughout the Raja Chola empire. Their bright, vibrant colors come from herbs, colorful leaves, and flower petals, and stand out against the granite, and look much brighter than other paintings from the era. While the colors are due to plant pigment, they are indeed striking and add to the allure of the temple and stories of magic. 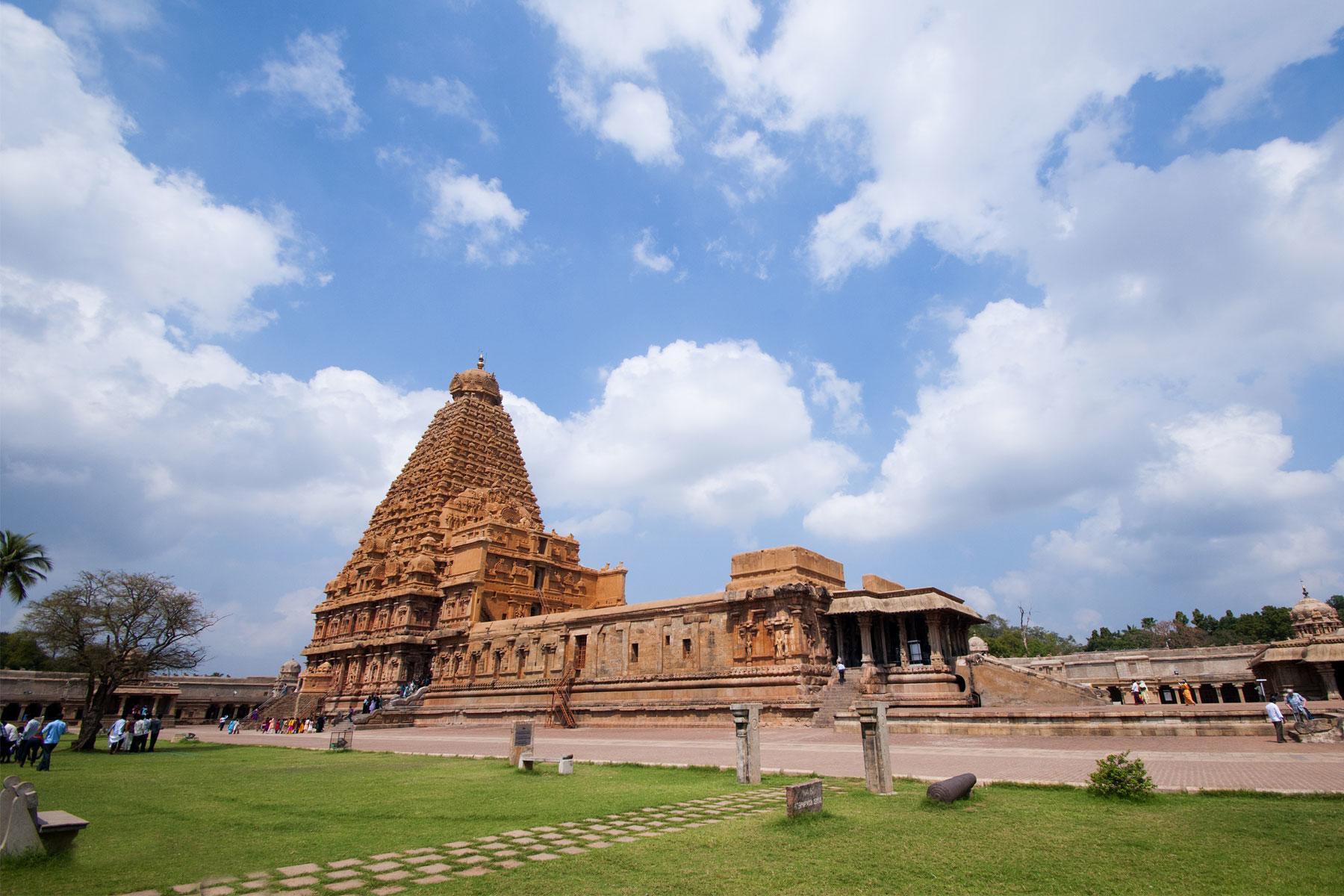 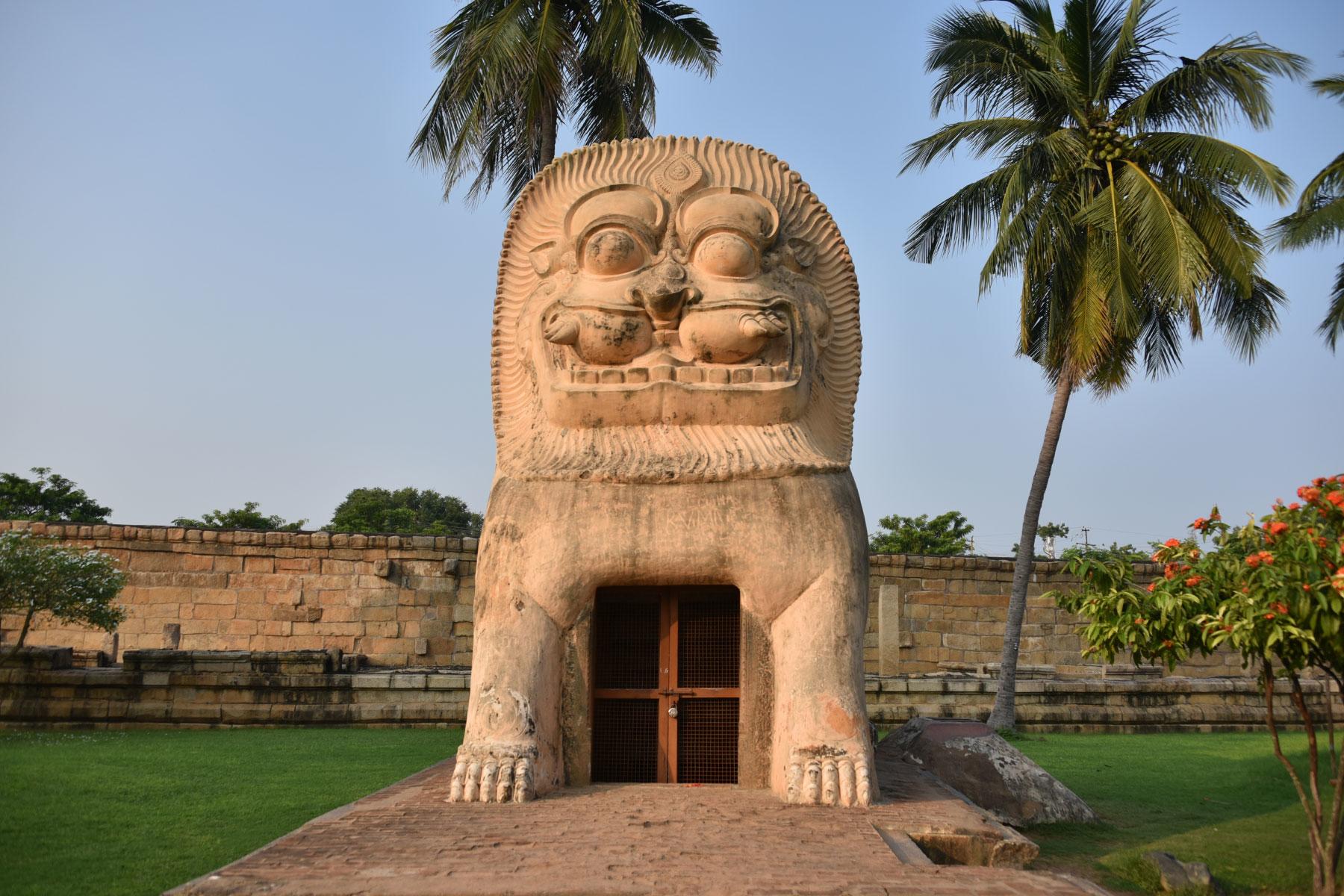 The once-mysterious Brihadisvara Temple is, in reality, a triumph of architecture and design, and a sight to behold on your next trip to Tamil Nadu.