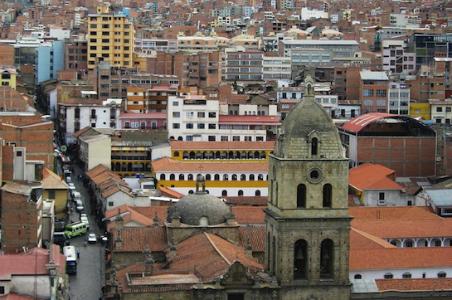 I just got back from an amazing trip to Chile and I loved it so much that I'm already thinking about my next foray to South America. I was looking up travel ideas for Bolivia and found this excellent story by David Farley in Afar magazine from a few years ago—it's one of their “Spin the Globe” pieces where they send a writer to a random destination with just 24 hours notice and see what happens. —Caroline Trefler, Senior Editor, Cities and Cultural Destinations

I was given Full Grown People: The Other Awkward Age, edited by Jennifer Niesslein, as a Christmas gift from my sister-in-law who had addictively read the blog that published these personal essays. Each of the true stories is under 10 pages and all contain some kind of adult issue, from entering rehab to making peace with a husband’s snoring. They are all different—the funniest was about dogs wearing diapers, but it’s tough to pick just one that was most poignant. Good reading for those who find themselves in that other awkward age known as adulthood. —Salwa Jabado, Senior Editor, Countryside and Adventure

This morning, squished between a woman whose music I could hear clearly through her headphones and a man who was catching his final minutes of sleep before going to work, I finished Kafka’s The Trial. What a tour de force! Heart-breaking, fragile, and often times hilarious, this was my first foray into Kafka but certainly will not be my last. And that final paragraph? Come on. Looking forward to the next book I finish on the subway! —Lara Kramer, Digital Marketing Manager

I’m extending my recent trip to Vietnam and Cambodia vicariously by reading Antonia Bolingbroke-Kent's entertaining A Short Ride in the Jungle. This British writer hopped on a small motorcycle and rode the vanishing Ho Chi Minh Trail through Southeast Asia, overcoming obstacles and encountering changing cultures. It may inspire you to plan your own escape: for ideas (including Vietnam), check out Fodor's Go List 2015. —Linda Cabasin, Editorial Director

This is a beautiful thing: Chris Ackerman has been saving the boarding passes from almost every flight he’s taken since 2000. He hacked a website to display them digitally, along with a slew of personal travel stats like his longest and shortest flights, most frequent seat number, and more. If I hadn’t just thrown out all of my own boarding passes in a New Year’s cleanse, I’d hack this site template to create my own! —Arabella Bowen, Editor-in-Chief

Zoe Heller’s The Believers was the perfect holiday read—extremely smart and funny about Marxism, Orthodox Judaism, drug addiction, marriage, and everything in between. The only distraction was a constant desire to slap the domineering main character in the face. —Róisín Cameron, Associate Editor, Countryside and Adventure

Winston Churchill’s My Early Life: 1874-1904, his account of his young adulthood and early years in the military and as a war correspondent, starts off quietly with school days but quickly turns into a series of cliffhangers, including his escape from a Boer POW camp and the daring rescue of an ambushed armored train. I didn’t expect to be so caught up in tales of gentlemanly battles—pre-World War I and the last of their kind—where “nobody expects to be killed.” The vocabulary is rich and the prose often dryly funny. My new favorite word: froward. —Linda Schmidt, Managing Editor

I’m excited about a new mobile site launched by the Cape Town-based Badilisha Poetry X-Change, the biggest archive of audio recordings by African poets in the world.Spawned in 2008 as an annual festival in Cape Town featuring poets from across the continent, Badilisha eventually morphed into a website which was recently relaunched with mobile access. Each poet has a page with photograph, biography, and poems in text and audio. It’s a fantastic way to preserve Africa’s oral tradition and give exposure to emerging artists who otherwise might not be heard. —Kristan Schiller, Editor, Cities and Cultural Destinations

I'm not even halfway through but am already in love with Amy Poehler's Yes Please. Full of sage wisdom, humorous tidbits, and plenty of childhood photos and stories, it's the perfect book to grab if you're in need of a post-holiday pick-me-up. And where else are you going to read about Poehler's first attempts at improvisation during an elementary school production of The Wizard of Oz? —Annie Bruce, Digital Editorial Intern