This once male-dominated musical genre is now led by female mariachi bands that are blazing new trails in San Antonio, Texas.

The Texas city of San Antonio has a rich history and culture, with Native American, European, and Mexican influences. With this multi-cultural heritage, San Antonio has created a vibrant food, art, and music traditions.

One of the most enduring and beloved of these traditions is that of the mariachi bands. Originating in Jalisco, Mexico in the 18th century, mariachi bands are traditionally comprised of guitars, violins, and trumpets that harmonize together, usually accompanied by lively vocals. They’re also known by their trademark traje de charro outfits, adapted from Spanish cowboy garments and comprised of a heavily ornamented jacket and pants with a matching tie and sash.

Mariachi music is ubiquitous today throughout Mexico and Texas; since the 1920s and 30s, people would gather in San Antonio’s La Plaza del Zacate to hear famous musicians such as Rocha and Martínez. By the 1970s, mariachi music was as steeped in San Antonio’s culture as it was in Mexico. Recently, the Academy Award-winning animated film Coco brought mariachi and Mexican music into the limelight on a global scale.

But one thing that mariachi music has always been is intensely male-dominated. Even the performance has a machismo nature—the musicians stand and often throw yells as they play. That is rapidly changing, however, with all-women mariachi bands on the rise to put their stamp on the genre. With roughly 30 all-female mariachi bands in the U.S. today, San Antonio is one of the cities leading this remarkable change.

“[Mariachi] used to be a very male-dominated genre, but female groups all over the world have changed that in a short amount of time,” says Vanessa Del Fierro, the founder and director of the band Mariachi Las Coronelas. “When we began nine years ago there were quite a few barriers. Some men used to throw in the occasional, ‘Oh, you dance, you’re pretty, that’s why they hire you.’ It was probably a bully tactic to scare us out of the business, but we knew better. They didn’t understand it was because of our ability to sing professionally, perform, our passion for the music, or our organized way of conducting mariachi as a serious business.”

Del Fierro, who is also a violinist and vocalist in the band, says that female mariachis may not sound like men—but they don’t want to. “Much has changed, and our generation of mariachi men have been quite supportive; they even perform with us from time to time!”

“My brain couldn’t understand why so much talent wasn’t entertaining everyone worldwide…This has always been my goal, taking our Mexican Mariachi culture around the world.”

The costuming for Las Coronelas was an important part for Del Fierro. “We were the first female mariachi group in recent decades to develop our own take on the attire,” she says. “I thought it would be unique branding while bringing my creative ideas to life. I developed the feminine twist on mariachi pants for Las Coronelas (it was frowned upon for women to wear pants) along with flamboyant dresses and off-shoulder blouses, combined with our signature red-rose for our hair.”

It was her love for costume design, combined with her passion for mariachi music that led Del Fierro to start Las Coronelas nine years ago. “I wanted to develop something unique visually and musically in my hometown; something that embodied my Mexican-American culture.”

The band began as a three-piece ensemble with Del Fierro playing violin, Carrie Sosa on guitar, and Clarissa Moreno on bass. As they grew in popularity, they added more musicians for a total of eight that comprise the band today. Mariachi Las Coronelas have toured Canada, performed at the Santa Fe Opera, and played for audiences including film director Robert Rodriguez. They recently appeared on The Jimmy Kimmel Show live from the South by Southwest Festival in Austin, alongside Bill Murray.

“Not only are the ladies talented vocalists and intelligent musicians, but they are phenomenal entertainers, which is not easy to find,” Del Fierro says. “Some of the ladies are educators and are sharing their talents with new generations of musicians.”

Embracing a New Generation of Mariachi

The education aspect is something that’s sure to bring forth a new generation of talented mariachi players, female and male. San Antonio leads the way in this, teaching mariachi in classrooms from elementary school through college—and the school district there has been doing so since the 1970s. Each year, more girls enroll in these programs, often outnumbering the boys, showing that female mariachis are here to stay.

Palo Alto College, the area’s community college, even offers a certification program through its Juan Ortiz Mariachi Academy, named for and led by the two-time Grammy Award-winner. Texas State University has also run a performance class, Mariachi Nueva Generación, for 20 years as part of its Latin Music Studies degree program, engaging students from all over Texas through workshops and clinics. The program has turned out celebrated mariachi musicians such as Celeste Curiel and Celeste Rios. 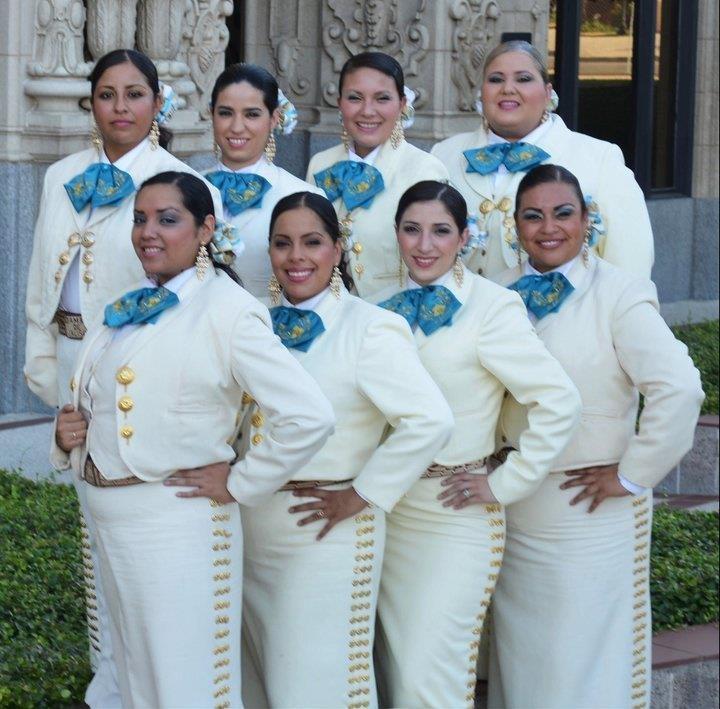 Another leading all-female group, the Damas de Jalisco are 10 talented young women ranging in age from 21 to 29. Each musician was hand-picked by their director, Sonia Marín, who founded the band in 2005 when she realized that there were a number of talented women in San Antonio who weren’t playing in any group.

“My brain couldn’t understand why so much talent wasn’t entertaining everyone worldwide,” Marín says. “I gathered up the courage to go out there and make something happen. This has always been my goal, taking our Mexican Mariachi culture around the world.”

The Damas have performed at U.S. Army bases all over South Korea, and Marín performed at the FIFA World Cup in South Africa in 2010.

Marín knows something about spotting and recruiting talent, and leading a team—she is also a high school head coach. “I know that building strong relationships and good camaraderie is very important,” she says. “The ladies in Damas de Jalisco are more than a team; they are family who share the same love and passion for our Mexican roots.”

Marín believes that the group’s success is partly due to the fact that their repertoire is unlike any other ensemble. The music is chosen to represent the various regions of Mexico, yet they take the versatility of mariachi to adapt it to various musical genres ranging from classical, country, and jazz. 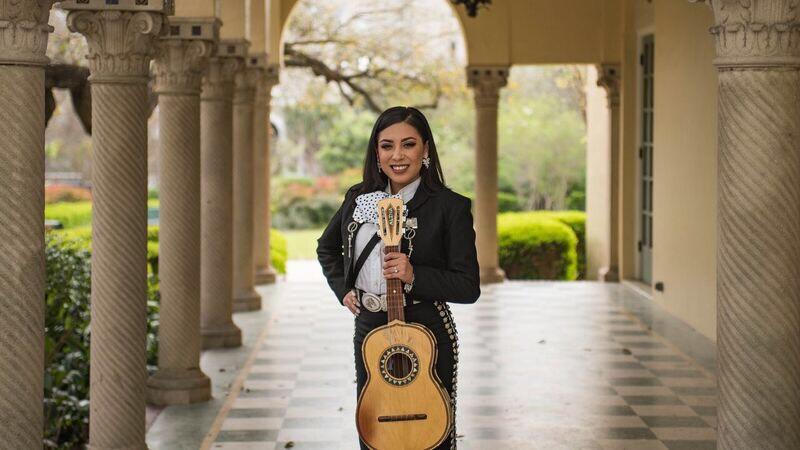 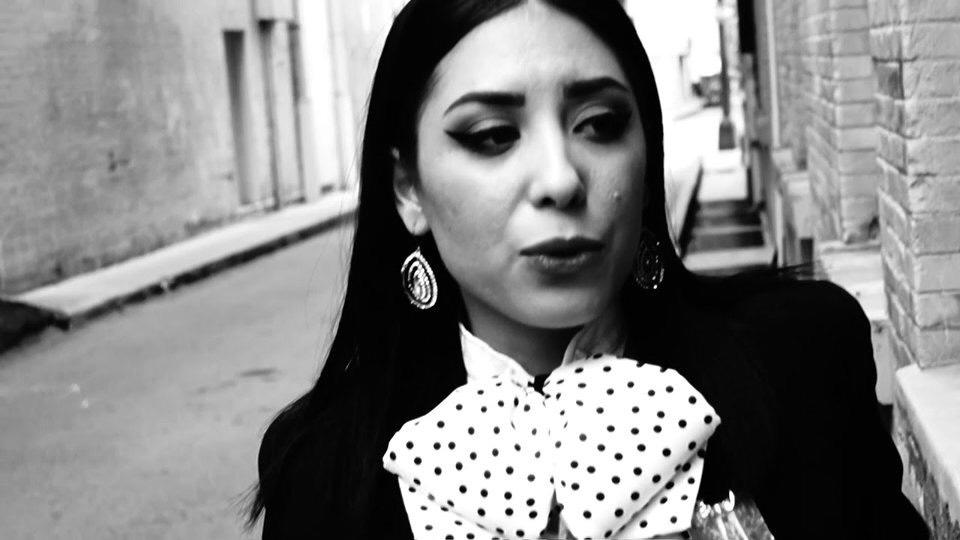 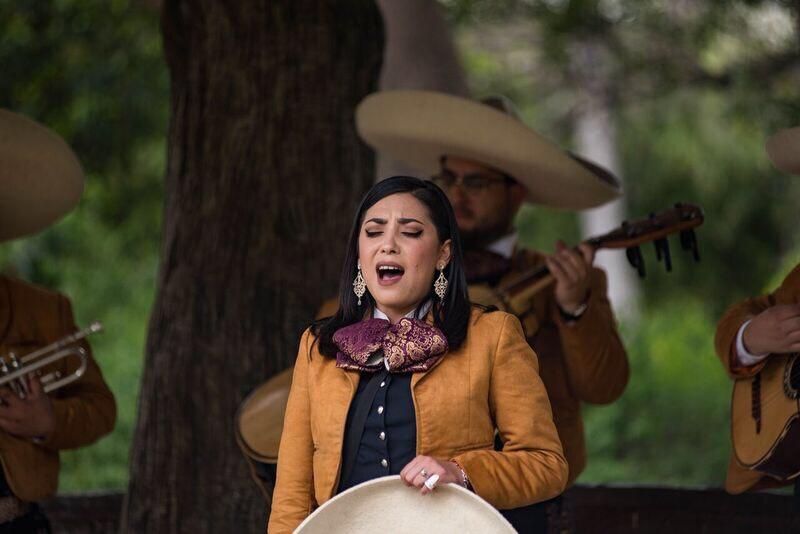 In fact, this adaptability of mariachi music is one of the aspects that is driving its resurgence in popularity—particularly among younger fans who may have previously considered the genre old-fashioned, or the stuff of cheesy Mexican restaurants.

Mariachi Entertainment System is a band that defies all stereotypes. The blended male and female group formed by David Ortiz takes some of the most popular tracks from classic video games and produces covers of them for their YouTube channel. They also record covers with other pop culture themes and musical genres.

“It’s tough for anyone, regardless of gender, to really study mariachi, learn lyrics and songs, and develop a true mariachi playing style. But as a female surrounded by men, there’s so much more to prove.”

“I know that there is a lot of history with culture and sexism when it comes to women in mariachi, and that there is a degree of that culture that perpetuates to this day,” Ortiz says. “For my part, I have only ever sought to have the best musicians possible in my ensemble. Sometimes they were women. Sometimes they were men. I don’t have to seek women for the sake of having women; there are many talented women who have put themselves in the position of being among the best, no matter what gender.”

One of their runaway hits was a cover they did of “Hopelessly Devoted to You” from the movie Grease. After Mariachi Entertainment System posted the video to their Facebook page, it went viral with nearly 100,000 views. Their latest venture is a melancholy rendition of “Linger” by The Cranberries, created as a tribute to Dolores O’Riordan after her death on January 15.

Alina Lozano, one of six female members of Mariachi Entertainment System, is the lead singer for both The Cranberries and Grease cover songs. Lozano is also a member of the mixed-gender Mariachi Azul de San Antonio, in which she plays guitar and sings.

“Being a female mariachi has always been a challenge, but definitely worth it,” Lozano says. “From the start, I met a lot of older more seasoned musicians who didn’t think I could play, or that I didn’t have what it takes to learn and play traditional repertoire, so I always used that as motivation to grow and learn as much as I could. It’s tough for anyone, regardless of gender, to really study mariachi, learn lyrics and songs, and develop a true mariachi playing style. But as a female surrounded by men, there’s so much more to prove.”

She foresees a strong future for women in mariachi. “There are still those who believe women have no place in it and it’s up to us to prove that we have a lot to offer,” Lozano says. “Fortunately, San Antonio has a large mariachi community as well as school mariachi programs and it’s so encouraging and lovely to see how many girls are involved.”

Where to See Mariachi in San Antonio 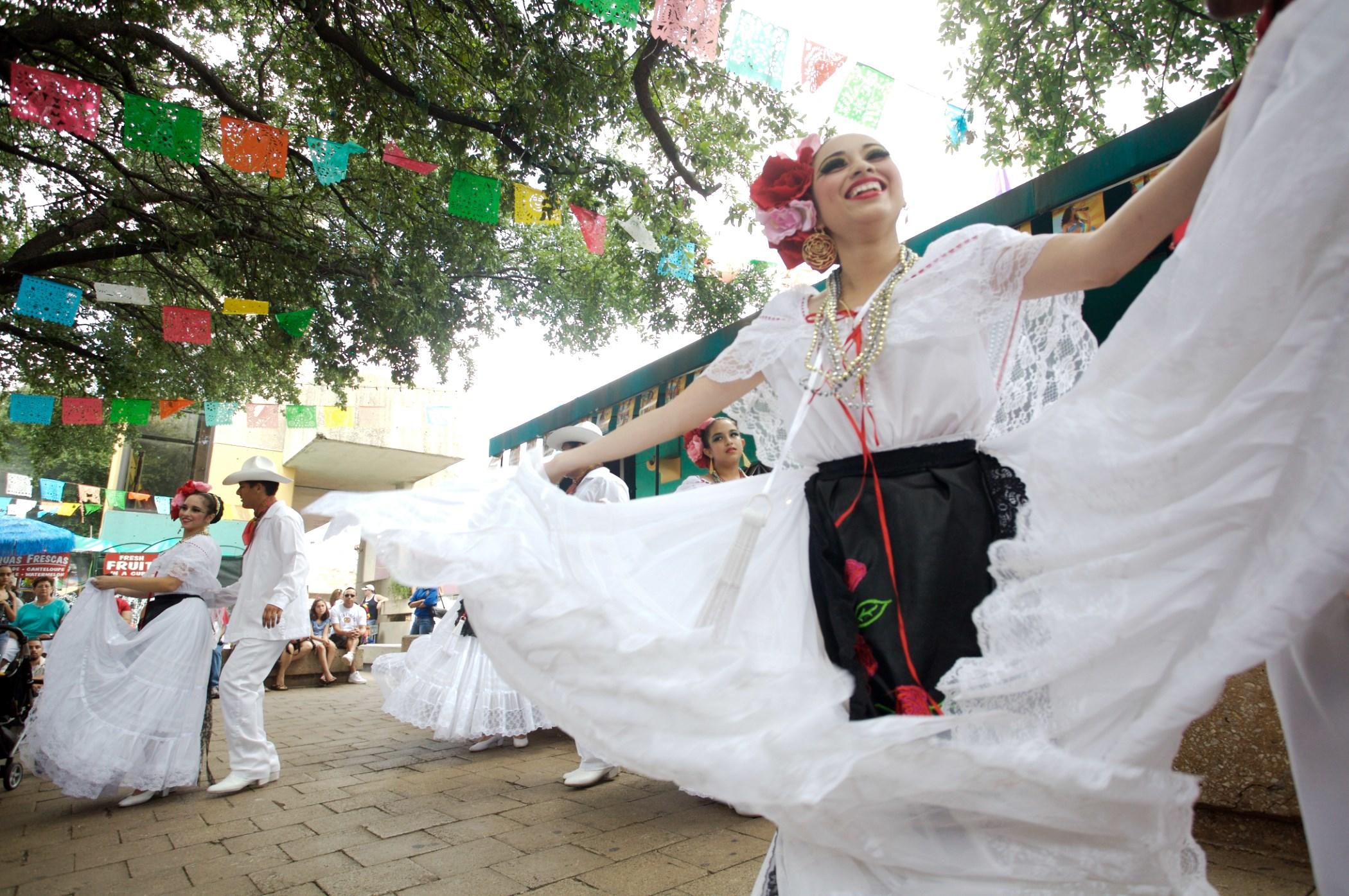 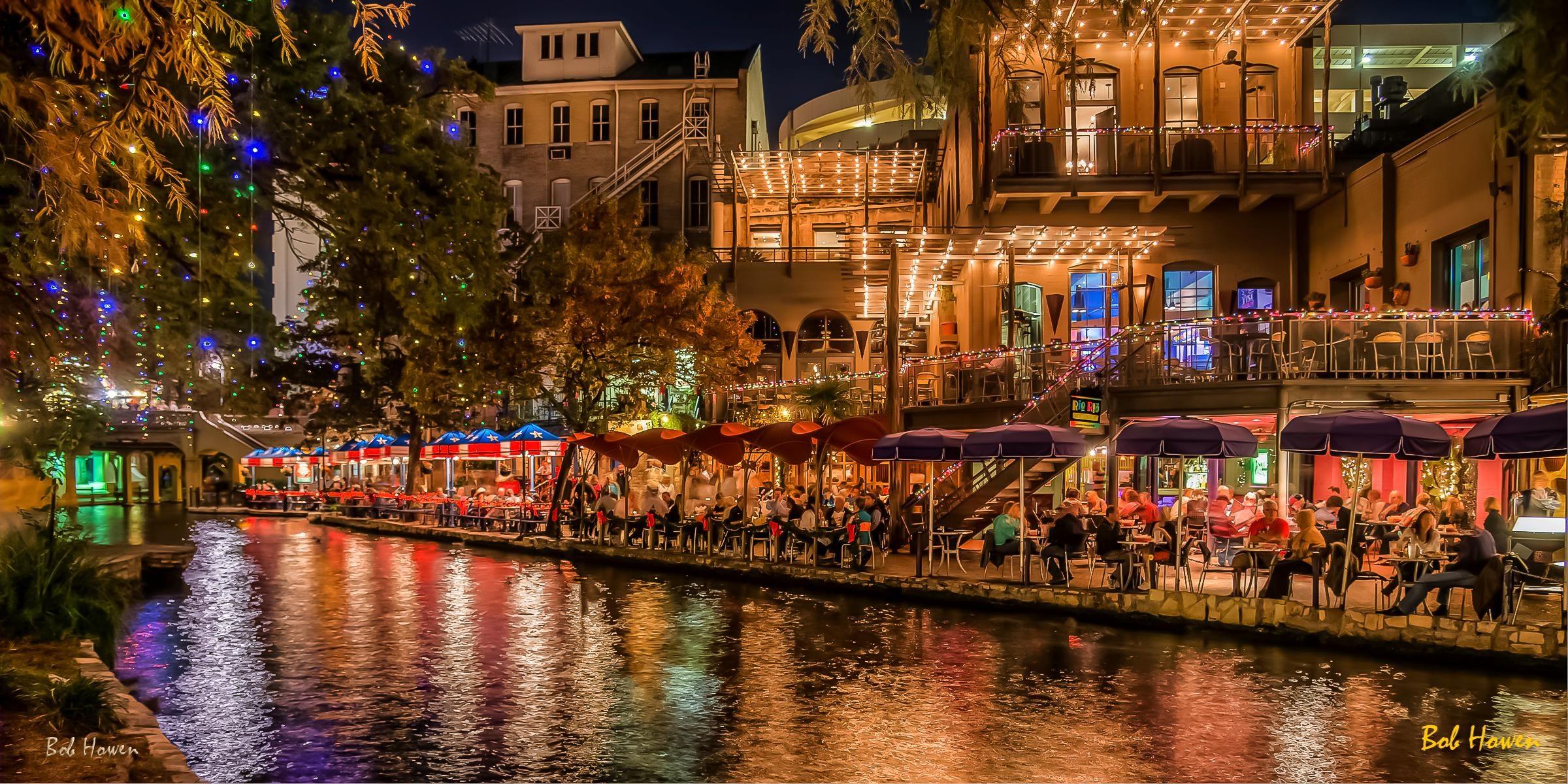 Mariachi musicians are a common fixture along San Antonio’s biggest draw, the River Walk, as well as in the colorful shopping plaza El Mercado. Mi Tierra Café and Bakery there even has its own Mariachi Bar.

Check out the Mariachi Las Coronelas Facebook page for event and tour dates.

Fiesta San Antonio, one of the city’s biggest annual events, offers plenty of mariachi music, along with a ton of others, throughout the 10-day festival.

Texas State University puts on a Feria del Mariachi festival each year with a mariachi competition, workshops, and community performances.

Mariachi Vargas Extravaganza is an annual event celebrating the history and cultural impact of mariachi music. The festival takes place in December and includes concerts by world-renowned musicians and competitions with participants from all across the U.S. They also put on various other performances throughout the year.