Love Halloween? Then you'll be obsessed with the Great Jack O'Lantern Blaze.

I’m a scaredy cat, but I love Halloween. Not a scary Halloween, but a wholesome Halloween. The canned vanilla frosting flavor of candy corn, giant leaves pressed into the wet sidewalk, the dim glow of decorations carefully stored in crumpled, faded newspaper kind of Halloween. And no area does a wholesome Halloween better than New York’s Hudson River Valley. It’s a place where you look around, and you just know that someone somewhere is bobbing for an apple.

The tiny towns and villages that dot Upstate New York are seemingly frozen in time with remnants of cobblestone streets and wrought iron lamp posts. It is Sleepy Hollow country, after all. And just 20 minutes away from that infamous cemetery and bridge is Van Cortlandt Manor, home of The Great Jack O’ Lantern Blaze. This seasonal attraction always makes those top 10 Halloween lists, and as someone who writes about theme parks and attractions for a living, I had to see what all the fuss is about. It’s just pumpkins, right? Yes. And that’s what is so fuss-worthy and mesmerizing about it.

Get Ready to Be Impressed

In its 17th year, this trail of carved, illuminated pumpkins has grown into a nearly 40-night event at two separate locations: Croton-on-Hudson and now Old Bethpage in Long Island. Why two locations? Because this installation is massive. The website says the average guest spends about 45 minutes walking through the maze of pumpkin sculptures, but I spent around two hours. There are more than 7,000 illuminated, hand-carved pumpkins on display in a winding path of themed vignettes and scenes. At $32 for adults and $24 for children, there’s a lot of value for what you see per dollar compared to other seasonal attractions.

What’s even more impressive than the sheer display is the human power needed to bring each pumpkin to life. While many of the pumpkins are now faux, there are still a lot of real pumpkins used—enough to need an army of more than 1,000 volunteers to scoop gourd guts.

Pumpkins Are a Work of Art

The best experience I can compare this to would be a Christmas tree trail or a lights drive-through. But those don’t have the interactive engineered sets that these do. Show me a fire-breathing Christmas tree because The Great Jack O’ Lantern Blaze has a fire-breathing pumpkin dragon. These installations are truly works of art, from detailed paintings to immersive bridges and tunnels. Everything that can be a pumpkin is a pumpkin. Instead of street lights to light the walkways, there are pumpkin stacks carved into the silhouette of street lights. There are hanging pumpkin owls in the tree. Oh, and there’s a pumpkin soundtrack, too. Two in fact, with more than an hour of original music composed for the various scenes.

There’s even a MoPA (a Museum of Pumpkin Art) with pumpkin interpretations of classic works of art from Keith Haring to Frida Kahlo to Leonardo da Vinci. But the most jaw-dropping section for me was the Pumpkin Planetarium, an arched tunnel of hundreds of celestial gourds that set the tone for witchy scenes ahead, such as The Three Witches from Macbeth. And then there was the rainbow zodiac display that really stretched my family’s patience. I lingered so long that they finally just gave up and walked ahead. 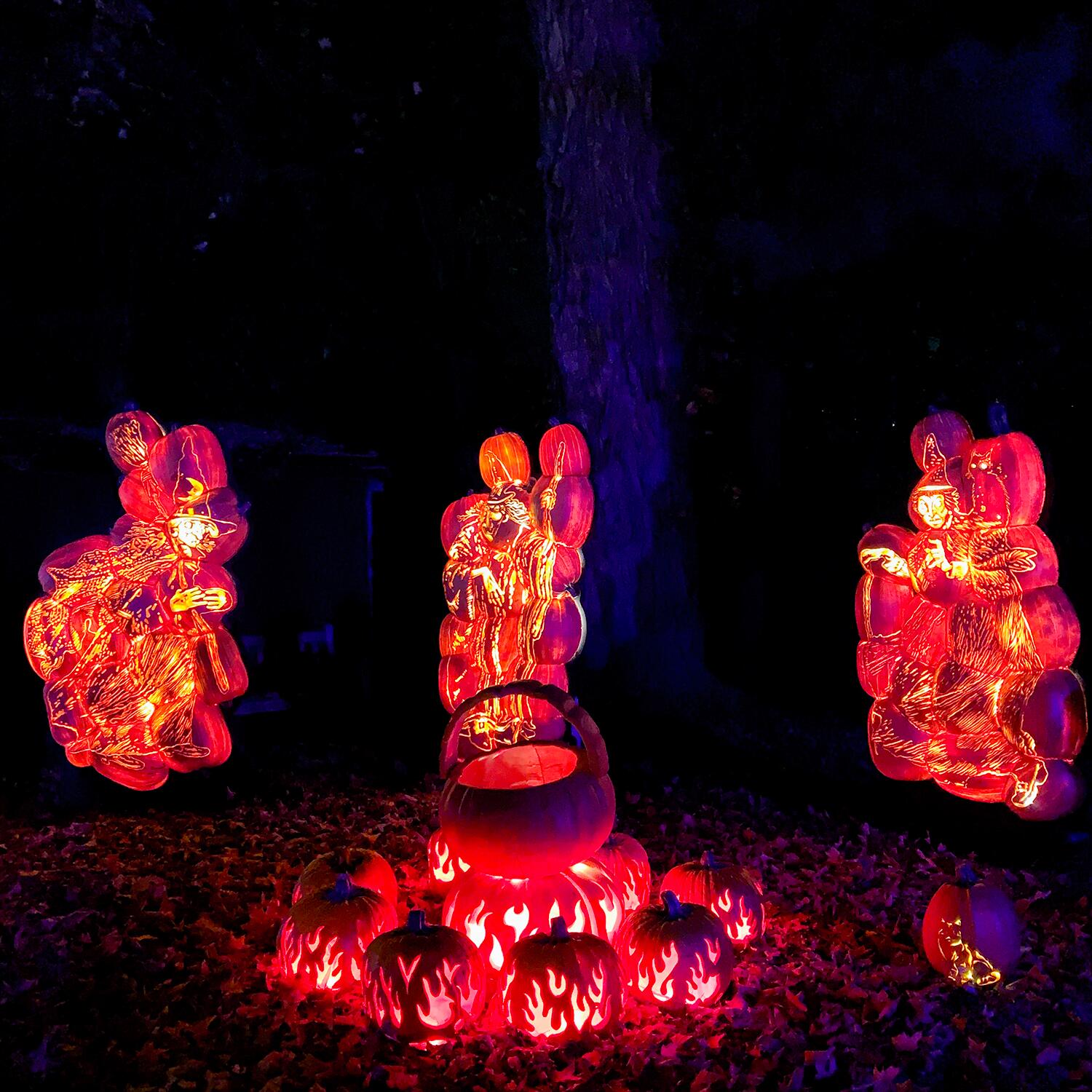 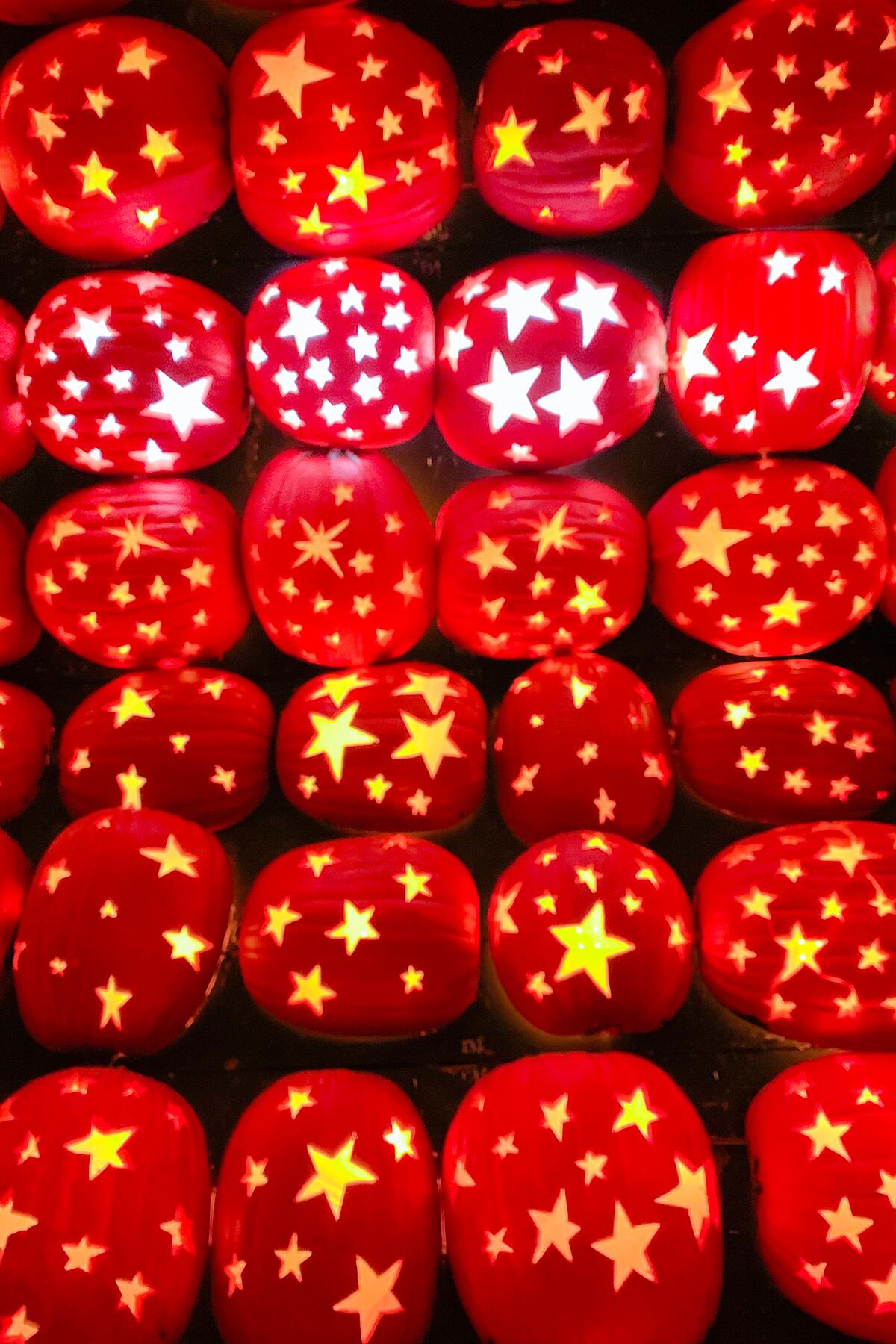 A Halloween Attractions That Gives Back

Something else that makes this spectacle so special compared to other attractions of its size is where the money goes. This whole event is a giant fundraiser for Historic Hudson Valley, a 501(c)(3) which helps preserve historical sites such as the Kykuit Rockefeller estate and Washington Irving’s estate Sunnyside. And there are nods to Historic Hudson Valley in the installations, too, from the Tappan Zee Bridge to a pumpkin Headless Horseman.

There’s even an educational pumpkin display for the origins of jack-o-lanterns in Irish folklore. “Stingy Jack,” who never could get into heaven nor hell, so he carved a turnip, lit it with a candle, and wandered the earth looking for a resting place.”

A Family-Friendly and Accessible Option

This is the best family-friendly Halloween attraction in the country, and not just because it’s kid-friendly. (Though it is super kid-friendly. Babies two and younger are free. and child’s discounted admission applies to ages 3-17.) It’s family-friendly in a much broader sense. The pathways don’t have stairs, only some slopes, so it is wheelchair accessible. (Though, there are stretches with uneven, unpaved ground.) That’s refreshing after covering so many rides and experiences where parts of the attraction aren’t accessible or are only accessible for ambulatory wheelchair users.

And the first display—the first pumpkins you see—before entering the trail is a big Pride flag. You can see it from the parking lot with nearly 50 pumpkins. And as you get closer to the entrance, you start to see that each pumpkin in the Pride flag has the word “welcome” carved in a different language.

It’s a literal warm welcome—and that’s what I call a wholesome Halloween.