No parades? No problem.

Far more than booze and beads, Mardi Gras is a staple of the Creole and Cajun cultures of the Gulf Coast. Cut adrift from this seasonal anchor, a heartbroken New Orleans is reckoning with the reality of the first canceled Mardi Gras parades in over 40 years. While plenty mourn the loss of the revelry, the artists who create the lavish (and expensive) floats face a harsher financial hit.

Enter the Hire a Mardi Gras Artist. Creators and paraders teamed up to raise money to give Carnival artisans work “while bringing Mardi Gras magic to New Orleans neighborhoods.” With every $15,000 raised, house fronts across the city transformed into Mardi Gras floats. And the grassroots impact goes back to the community roots holiday.

Mardi Gras Is More Than a Party

“Mardi Gras is not canceled; just different. No parades in 2021.”

To the uninitiated, this tweet by the City of New Orleans in November makes little sense. The shallow narrative of New Orleans as a party city is written heavily by what people picture when they think of Mardi Gras: the raucous scenes of parades down Bourbon Street. But to truly understand why the house floats of Carnival were such a hit, a crash course in this holiday highlight of the New Orleans year is crucial.

First, a bit of myth-busting. Modern Mardi Gras is not just one parade on one day. It’s not even actually just called Mardi Gras. The season of Carnival kicks off on Twelfth Night, or January 6, and goes to the last day, Mardi Gras, or Fat Tuesday. Different krewes, or societies of like-minded paraders, gather to organize their own parades throughout the season.

And Mardi Gras and Carnival are not just for New Orleans. Carnival rolls worldwide and communities across East Texas, Louisiana, and lower Alabama celebrate Mardi Gras. The celebrations have shifted in the U.S. since arriving with French Canadian settlers in the late 1600s. They vary by region and have rural and urban differences. But all come back to the original intent: gather together to make sure everyone is fed and cared for before the fasting season of Lent.

Carnival artist Caroline Thomas highlights the collective experience. “New Orleans during Mardi Gras is not the full picture. It’s not just a day. It starts right after Christmas, the preparations. It brings people together, everyone cooking pots of gumbo and working together, getting to know their neighbors, and hanging out with friends. It’s a fabric that holds the community together. The Krewe [of Red Beans] is a perfect example. We bonded through Carnival and then were able to have this response for COVID because of these connections. Carnival builds communities.”

In the beginning, Thomas was just thinking of a few houses. When she heard the news that parades were canceled, her thoughts quickly turned to fellow artisans. Simply replacing Carnival work with small, freelance projects was impossible, particularly for specialized artists doing large-scale work like architectural sculpture.

Thomas won’t take credit for the idea of a house float. But she did begin to think about how professional quality artwork for house fronts could bring work to artists and joy to residents. The problem was a traditional float is funded by the dozens of people who ride it. Paying for something of this scale and quality, while keeping it available for all homes in all neighborhoods, was the trick.

So Thomas went to artist and Krewe of Red Beans founder, Devin De Wulf. De Wulf has been busy for New Orleans, organizing massively successful food programs to connect local restaurants with both essential workers and musicians and artists. From their work together with these projects, as well as De Wulf’s 12 years organizing parades, she knew he had the skills to bring something together.

Bring it together he did. With the support of his Krewe of Red Beans, other partners, and the city’s residents, the project has raised over $100,000 and saved 45 jobs.

“Devin said, ‘Hm, let me think about it,’” recalls Thomas. “The next day he had $5,000 in seed money and was ready for a meeting with flow charts. Battle plans. With that seed money, we were able to do the Doctor John house [also known as Night Tripper]. People just needed to see what it could be.”

Organizationally, Hire a Mardi Gras Artist was able to accomplish up to a whole year’s work within a month. As the money started to come in, the project was able to fund several teams working simultaneously on the lucky homes across the city.

De Wulf credits the great community support. While house floats could be bought in full by an individual or group, raffles allowed everyone to get a shot at a house float. “The raffle brought a lot of people in. Some winners gave $20 and got $15,000 of amazingness for their home.”

And it was this accessibility and surprise that helped bring the layers of Carnival magic to the parish. “This has a grassroots ethos and it feels like it’s truly a city effort. We wanted this to be for humble and working-class neighborhoods, too. That’s how we inspire a city during this difficult time,” says De Wulf.

‘The People Are King’

Every year has a theme for the season and since parades couldn’t anoint their typical kings and queens, this year’s theme is “The People are King.” Staying true to this, the Hire a Mardi Gras Artist project kept the morale and basic needs of the people of New Orleans at the center of every decision.

“There would be this crushing depression if this was just another Tuesday in the city,” says Thomas. She hopes people drive around, blasting their Mardi Gras soundtracks while eating King Cake, and see the houses. 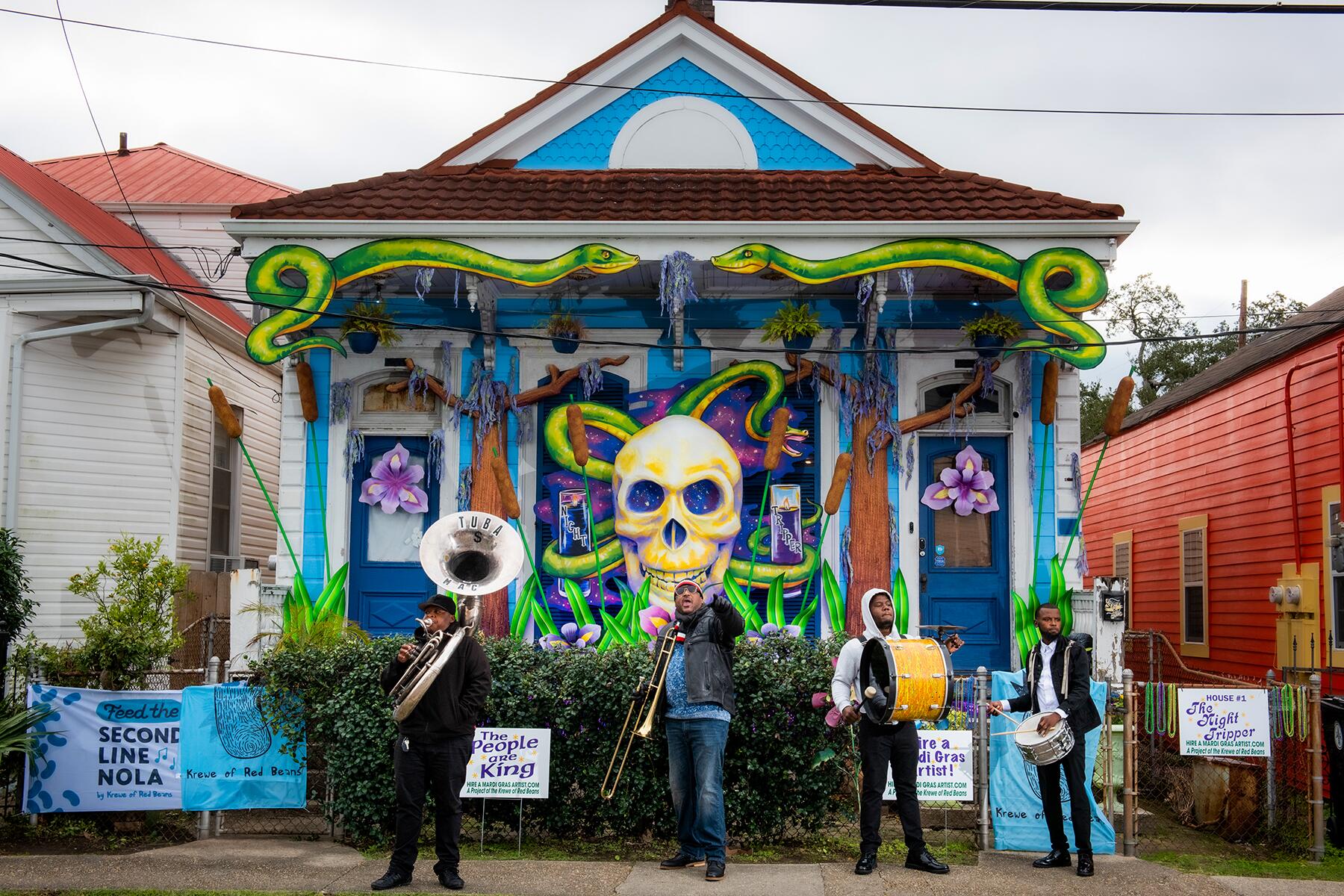 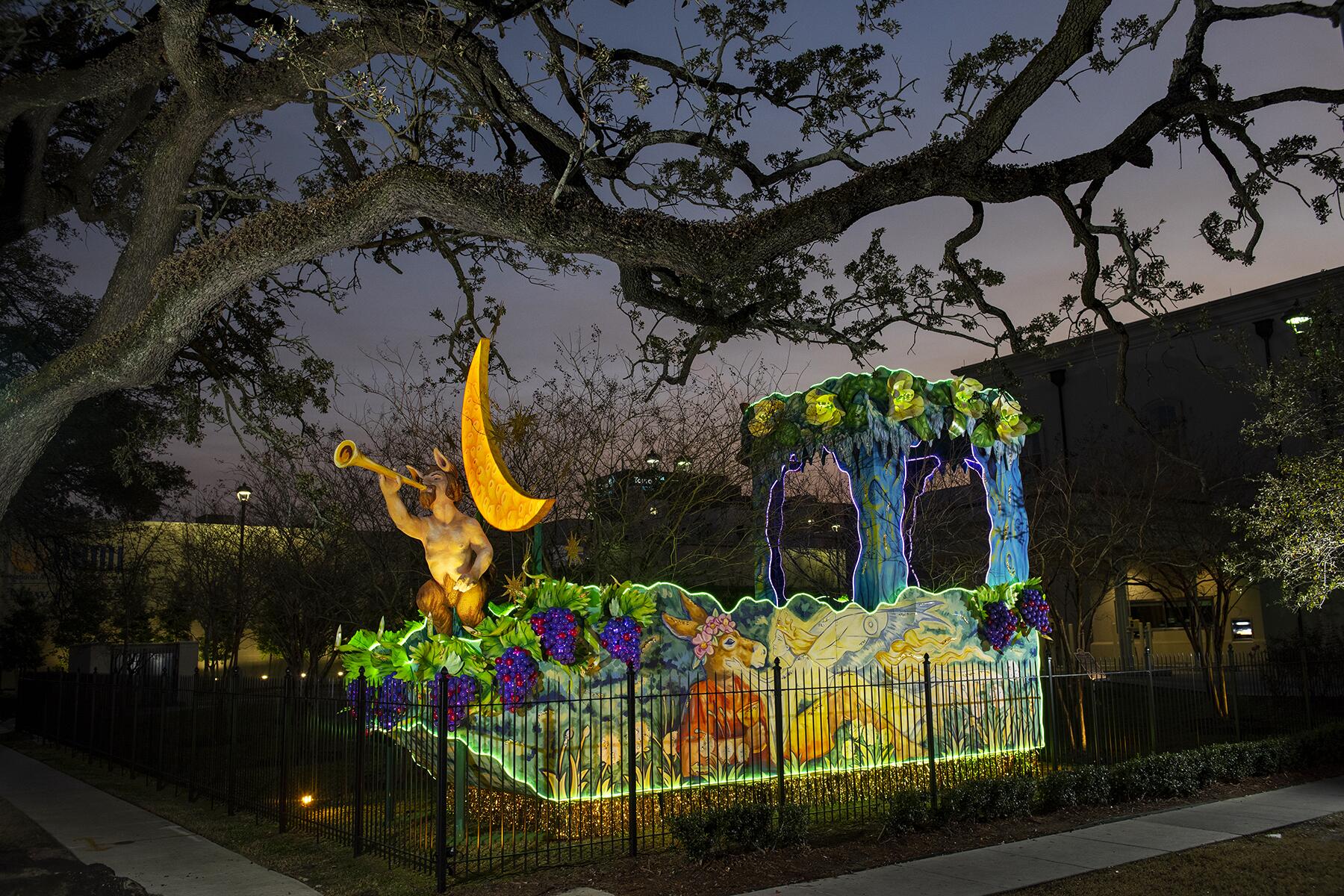 “One of the things about Carnival is the unexpected,” says Thomas. “Those are the magical moments. In a normal year, you can be going into the store to buy kitty litter and then step out into this parade. With this, at least you can have that moment by turning the corner and seeing this amazing piece in the neighborhoods.”

De Wulf, ever the strategist, looks across all of the aspects. “Mardi Gras is symbolically so important for our city, it’s almost spiritual. For people not to have the normal Mardi Gras is so painful. And then with simply living with COVID and the economic hit to the city with the loss of tourism, it’s a difficult time. Along with the beautiful artistry, the main objective is to put money in people’s pockets to survive COVID.”

Thomas agrees, taking the season’s concept of community support back to its origins. “The original Mardi Gras were people going door to door, handing out food or money or fixing big pots of gumbo to make sure everyone eats that night. These projects help make sure people get fed, literally and metaphorically.”

As the season nears its big finale of Mardi Gras, the Hire a Mardi Gras Artist project will continue. Going forward, fundraising will support 10 local artists in the creation of large art pieces that continue to carry the message: The People are King.