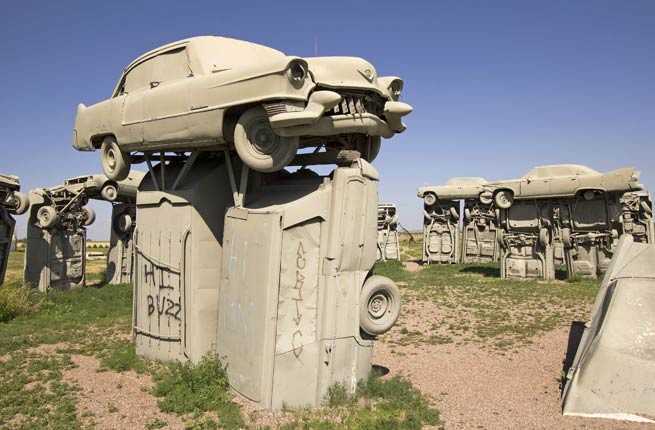 Some US tourist attractions—Old Faithful, the Liberty Bell and the Las Vegas Strip come to mind—garner millions of visitors each summer by sheer nature of their existence. But there are hundreds of other roadside attractions that fly below the radar of unsuspecting travelers until a highway billboard or travel-blog mention (ahem) catches their eye. Are they worth taking a detour to check out? Absolutely. Here’s the scoop on the most unusual and noteworthy roadside attractions to pull over for on your next road trip.By Donna Heiderstadt

The vision of artist Jim Reinders, who was inspired after a visit to the prehistoric temple of Stonehenge in England, Carhenge has been a fixture in western Nebraska since 1987. It consists of 38 cars placed to recreate the exact dimensions of the 96-feet-in-diameter UNESCO World Heritage Site original and spray-painted grey. 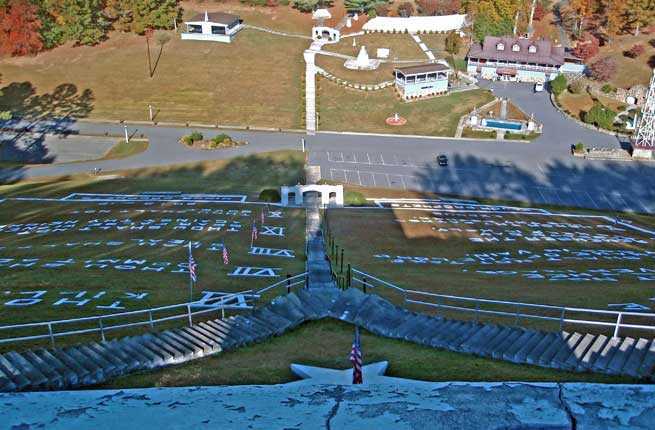 The fact that that world’s largest Ten Commandments—which are written in four-foot by five-foot cement letters—is located in the Fields"> in remote western North"> let’s you know you’re in for a religious experience. But you’ll also get a workout because thou shalt climb more than 300 steps up Ten Commandments Mountain to best appreciate the word of the Lord. 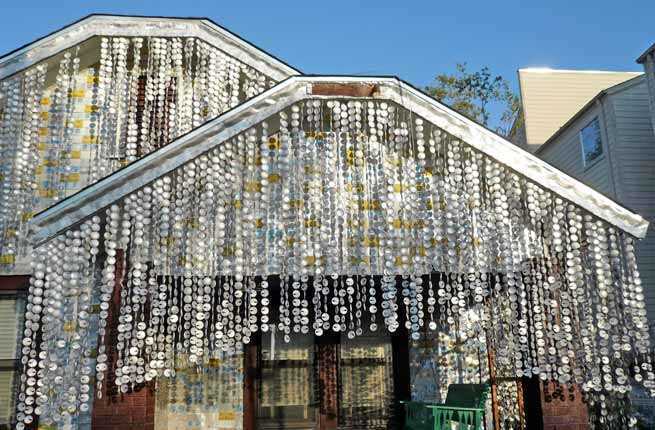 Lots of thirsts were quenched to build the Beer">, a Houston landmark that owner John Milkovisch spent two decades covering with his own artistic version of aluminum siding: an estimated 50,000 beer cans. Milkovisch (who died in 1988) polished off the beer himself, aided by his wife Mary and some neighbors, and used every part of the can—flattened sides, bottoms and pull tabs—to put 222 Malone St. on the roadside wonders map. 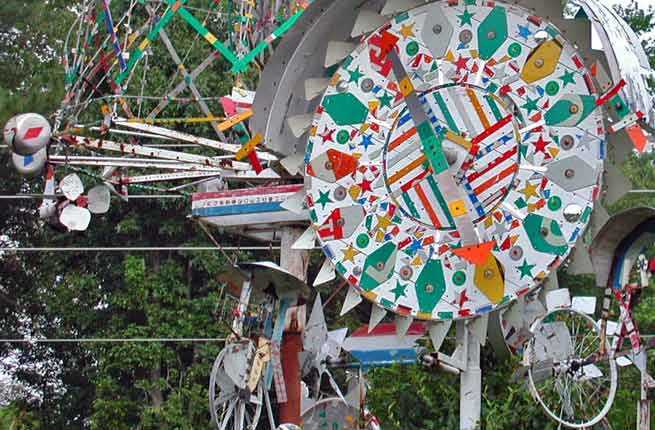 What’s a whirligig? It’s any object that spins or whirls, and you’ll commonly find colorful, folksy versions atop rural fence posts and barns. But North"> whirligig impresario Vollis Simpson has super-sized this craft by creating more than 30 massive moving sculptures from machinery parts and industrial salvage. Now 93, Simpson is allowing the town of Wilson, located between Raleigh and Greenville, to create the Vollis"> (opening in November 2013) filled with his fanciful art machines. 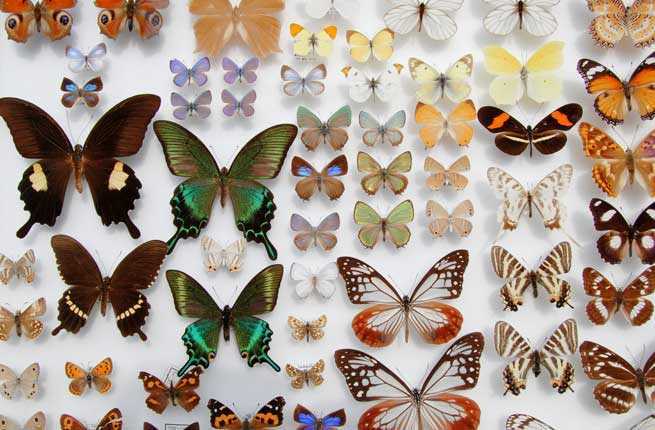 Billing itself as the Bugseum of New">, Insectropolis in Toms River is dedicated to all things creepy and crawly, from fuzzy tarantulas and buzzing honeybees to glow-in-the-dark scorpions and Madagascar hissing cockroaches. Kids will likely love the hands-on opportunities to touch the bugs —while you’ll probably prefer to simply look (and try not to scream). 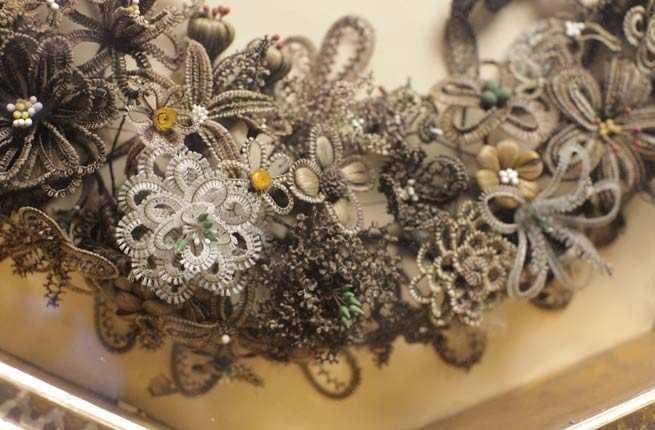 Those 19th-century Victorians sure had a thing for hair—they not only created decorative wreaths from human hair, but also wore jewelry made from it as a token of affection or a remembrance of someone who had died. Leila's"> in Independence, Missouri, is the only museum of its kind, with more than 600 hair wreaths and 2,000 intricately woven pieces of jewelry—the oldest being a brooch made in 1680. Now that’s some decorative DNA! 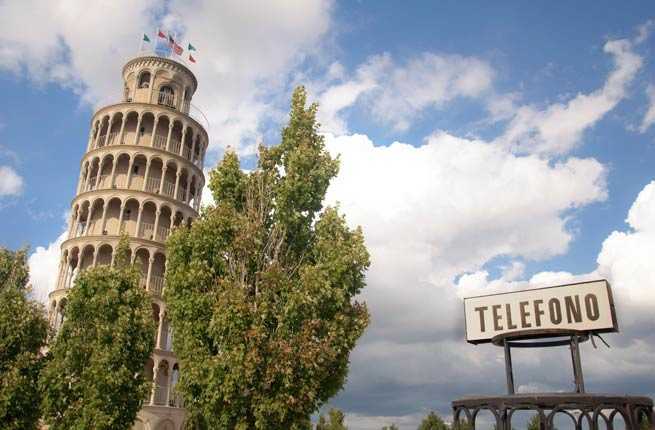 If Pisa,">, is too far a trek for you, head to Niles, IL, outside Chicago, where a half-scale replica of the Leaning Tower has stood since 1934 (Italy’s original is more than 600 years old). Built by industrialist Robert Ilg to cover a water tower in a recreation park, the 94-foot-tall Leaning Tower of Niles is now owned and maintained by the local YMCA. Niles and Pisa have been sister cities since 1991, so try saying “ciao” instead of “cheese” when posing for your photos. 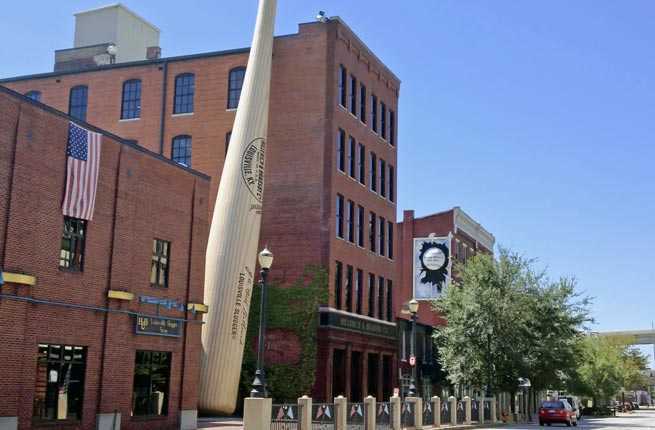 It weighs 68,000 pounds and stands 120 feet tall in front of the Louisville"> and Factory in downtown Louisville. But baseball fans will be most excited to know that it’s an oversized replica of the 34-inch Louisville Slugger used by Babe Ruth—with one exception: it’s made of steel not wood. 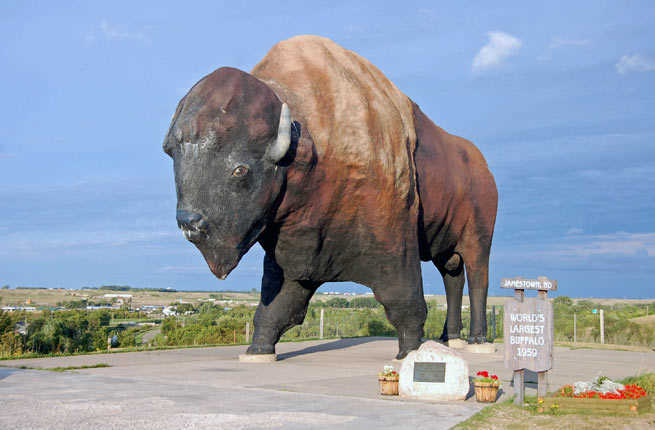 Yes, they grow their buffalo big in North">, but this giant-sized roadside buffalo">, located in Jamestown (aka “Buffalo City”) is the mother lode of photo-ops. Pose your posse in front of this 60-ton steel, mesh and stucco creation erected in 1959 and its 46-foot-long and 26-foot-high silhouette will have a ”Honey, I Shrunk the Kids” effect. 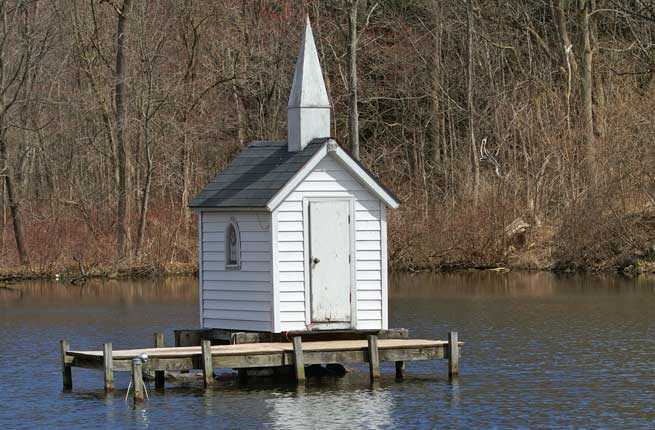 If you’re feeling a wee bit insignificant, praying or meditating in the Cross Island Chapel, a tiny three foot by six foot church located in the middle of a pond in the upstate New York town of Oneida, might just be the antidote. Built in 1989, the non-denominational mini-chapel that seats two is also available for special occasions—which is certainly one way to cut down the guest list for your wedding. 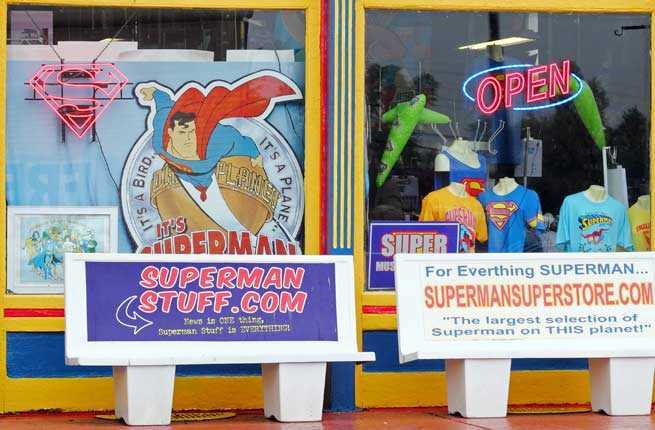 Pull on your blue tights and fasten your red cape before heading to the City">, an Illinois hamlet of 15,000 founded in 1839 and the official Home of Superman since 1972. Pose with a 15-foot-tall replica of the Man of Steel in Superman Square or check out the bronze of actress Noel Neill, who played Lois Lane on the 1950s TV series. 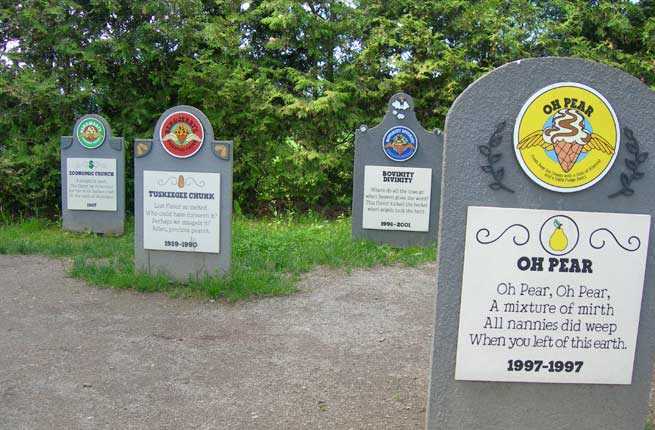 Everyone has a favorite Ben & Jerry’s flavor (Cherry Garcia or Chubby Hubby, perhaps?), but alas some flavors were not long for this world. Being the clever marketers that they are, the Vermont-based innovators created a Flavor">, a plot of land set on a hill overlooking its factory and surrounded by a white-picket fence, where several dozen deceased—oops, discontinued—flavors such as Makin’ Whoopie Pie and Bovinity Divinity are memorialized with poetic headstones. 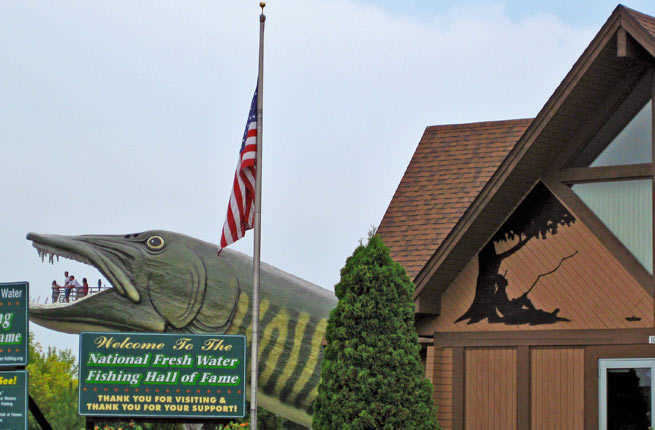 Located at the Fresh"> in Hayward, Wisconsin—which may sound like a snooze to anyone who isn’t crazy about rubber waders and feathered lures—the Shrine to Anglers is anything but: it’s a concrete, steel and fiberglass homage to a leaping muskellunge fish that stretches one-half city block long, towers more than four stories high and can accommodate 20 people on a platform in its gaping mouth. 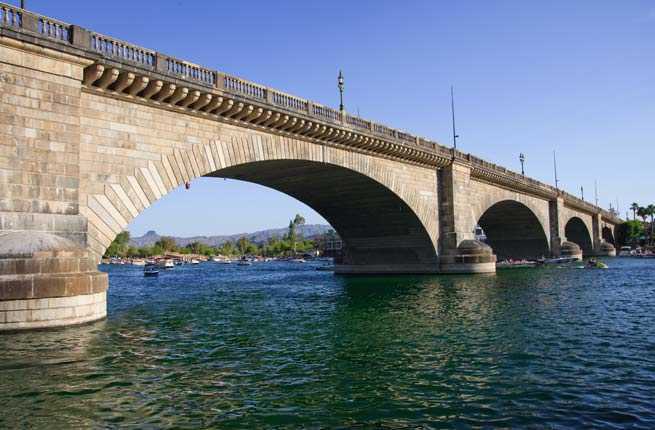 If you dream of days gone by spent strolling alongside the River Thames in London, you can recapture some of that nostalgia in the arid desert environs of Lake">, where since 1970, the actual London"> (built in 1831) has stood after being deconstructed, transported 5,400 miles, and reconstructed at a cost of $2.46 million. It’s the state’s second biggest tourist attraction after the Grand Canyon. 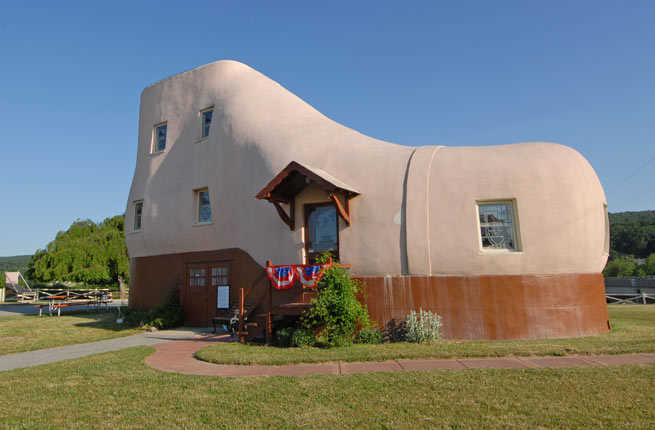 Courtesy of A. L. Spangler/Shutterstock

”There was and old woman who lived in a shoe”…or was there? In Hellam, Pennsylvania, there was! This wood frame and stucco Shoe"> was built in 1948 by the “Shoe Wizard of York” Mahlon Haines as an advertising gimmick/guesthouse. It measures 17 feet wide by 48 feet long, and has three bedrooms, two bathrooms, a kitchen, and a living room on five levels. 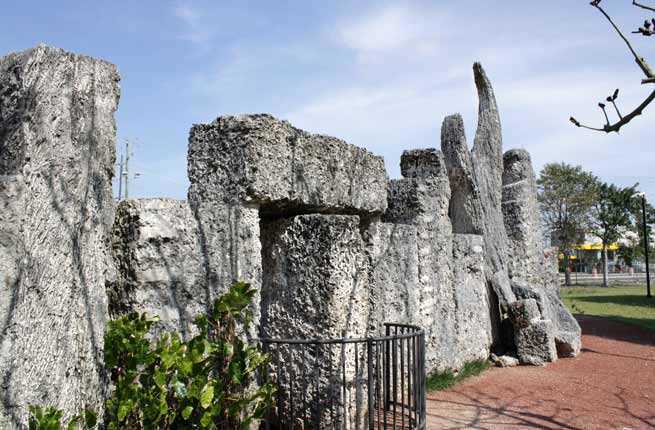 How did one slightly built man (said to weigh about 100 pounds) construct the Coral">, a labyrinth of love consisting of over 1,100 tons of coral rock hand-carved over 28 years? Located in Homestead, FL, south of Miami, it’s the legacy of Edward Leedskainen, who was jilted by his true love, Agnes Scuffs, and secretly built this monument to her from 1923 to 1951. Another fun fact: Billy Idol was inspired to write “Sweet Sixteen” by Ed’s story and filmed his music video at Coral Castle. 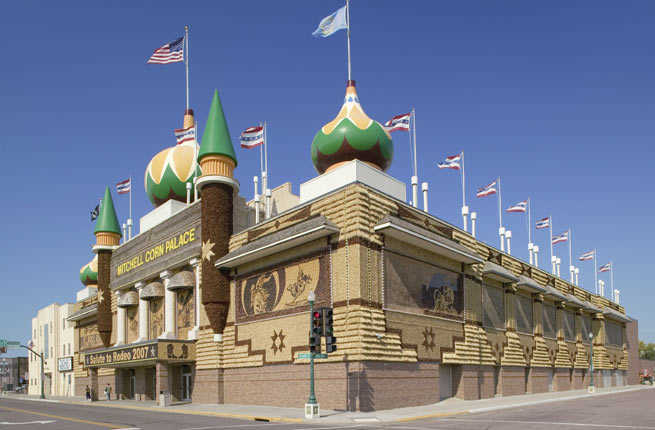 Rather than using traditional mural materials such as tiles or mosaics, the artists who create the original exterior murals every year at the circa-1921 Mitchell"> in South"> rely on 13 shades of naturally colored corn—ranging from red to black to green—as well as other grains and grasses. For a look at the decorating process, visit during September since murals are completed by the first of October (but the Palace is open year-round). 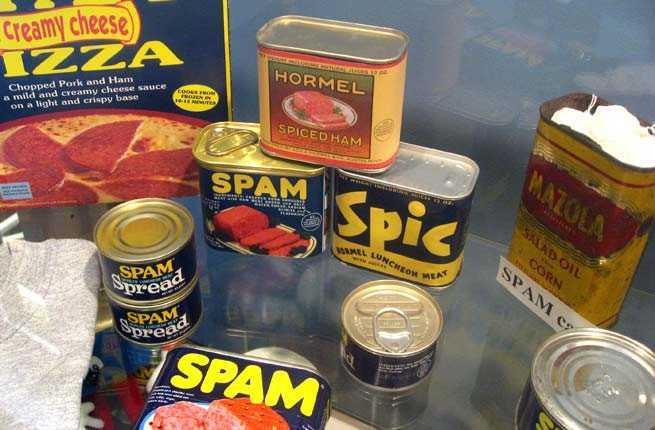 Few food products are the butt of as many jokes as SPAM, the pork shoulder/ham in a can luncheon meat first introduced in 1937 (an astounding seven billion cans had been produced by 2007—and that’s no joke!). At the SPAM"> in Minnesota, which opened in 2001, you’ll learn tidbits such as how SPAM products are made and why they are so popular in Hawaii. Stop by the so-called “Guggenham” for ready-to-eat trivia, vintage advertising, and collectibles. 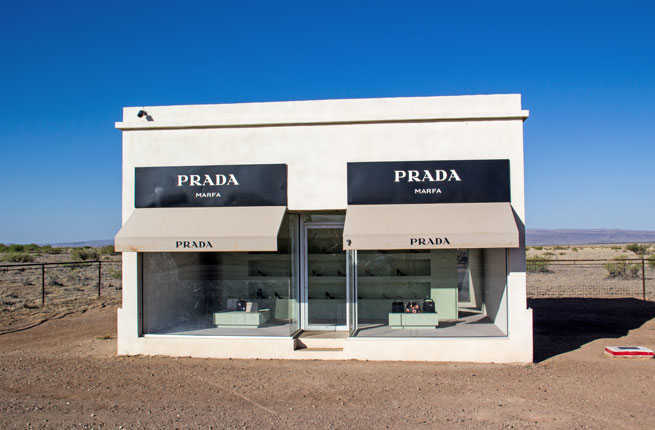 So, you’re driving along desolate stretch of U.S. Route 90 outside Marfa in northwest Texas when you see a white-stucco building up ahead and as you get closer, you realize it’s a Prada store—only it’s not. Created in 2005 by artists Elmgreen and Dragset, it’s a permanent sculpture installation featuring handbags and shoes on display in the windows, but it has never been open for business and never will be. 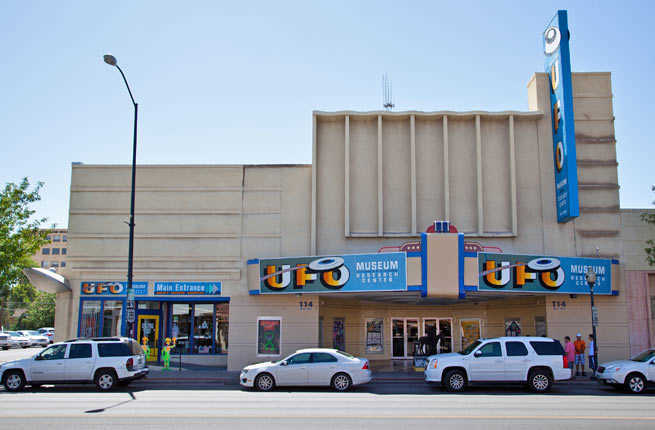 Was it an alien spacecraft or weather balloon? Were bodies collected and was there a government cover-up? Decades after a July 1947 incident near Roswell, the debate continues and the International">, opened in 1992, chronicles this incident as well as other UFO sightings and abductions, crop circles, and other matters of an extraterrestrial nature.