Though this odd holiday tradition is mostly folksy, mummering has had its dark moments. Horse skulls and sometimes murder are part of its history.

Mummering is the folksy, but odd, Newfoundland Christmas-time tradition of visiting neighbors at home in strange disguises. Participants “mummer up” (disguise themselves) before going out on their house visits. These are not representative costumes; you aren’t going as a particular character. Traditionally, costumes are anything mummers could throw together on the fly. People didn’t historically have a lot of money in the mostly rural communities where mummering is most popular, so that has meant donning your father’s overalls or red union underwear. Or your mother’s bra. Some mummers wrap themselves in quilts (a lot of padding goes on in mummering), wear cardboard boxes over their heads or mittens on their feet. The idea is to look lumpy and misshapen and quite ridiculous.  The overall effect is of giant puppets gone all weird, though, a creepier traditional mummer costume involved a hobby horse costume. Not the children’s toy version of a hobby horse. These costumes were made of skulls of actual horse skulls.

Once disguised, groups go a-knockin’ on doors of neighbors and friends and ask the question: “Any mummers allowed?” If so, the game continues until the host guesses your identity, at which point costumes come off, and food and drink—usually Christmas cake and homemade blueberry wine— and music is shared.  (Swinging a granny around the room is also often involved.) While the guessing game is going on, mummers alter their voices while engaging in conversations, reciting poems, or acting out scenes from a play. 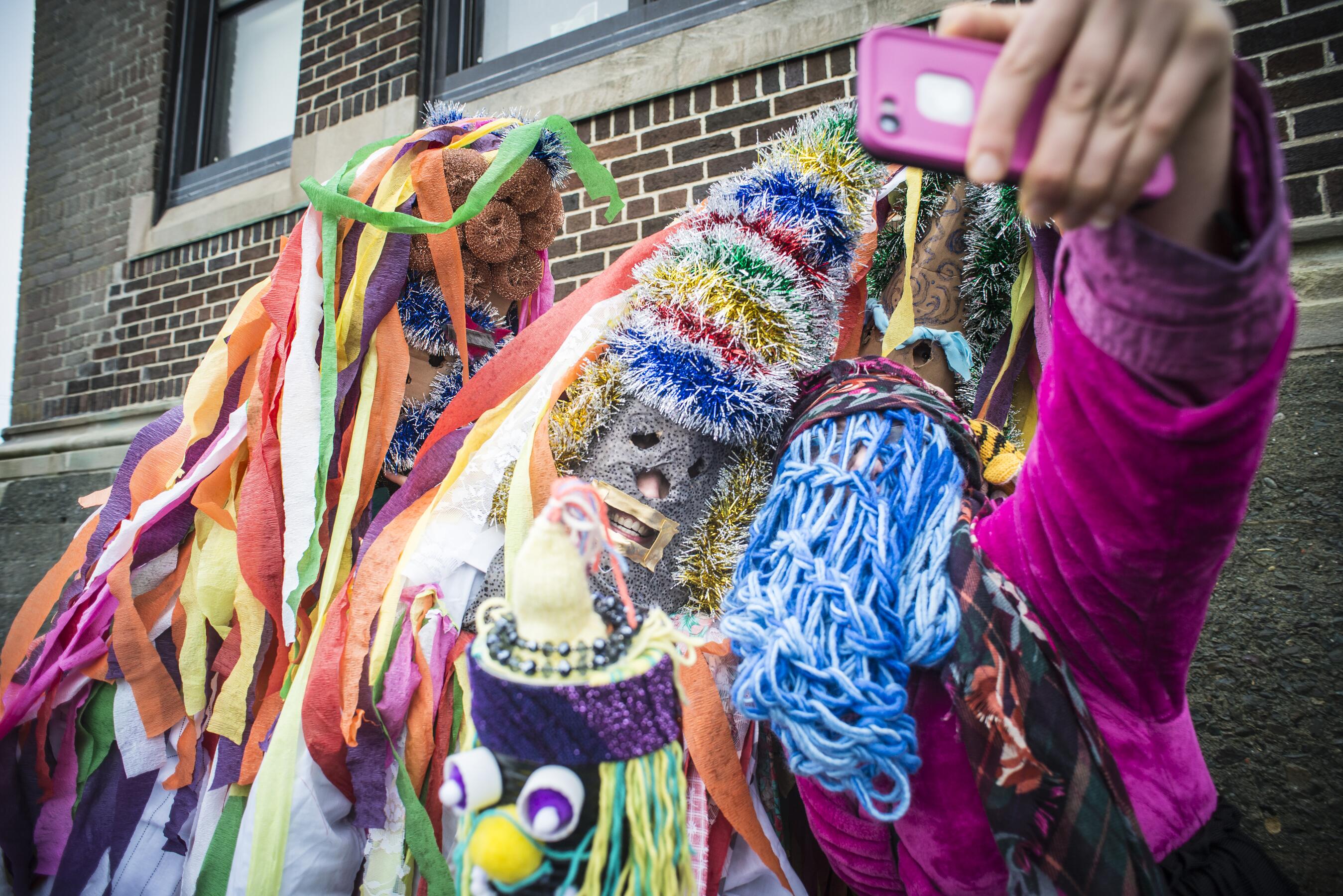 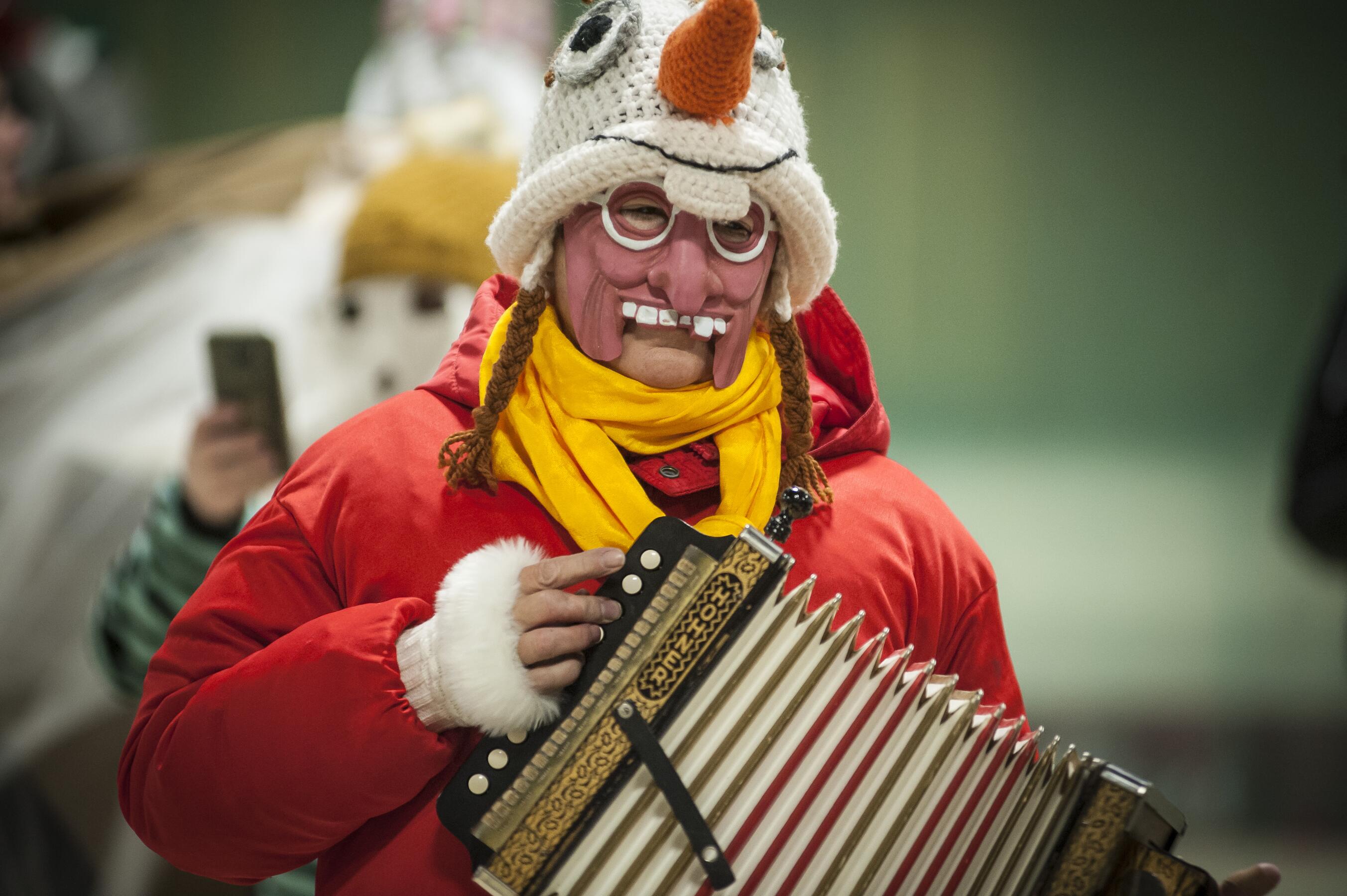 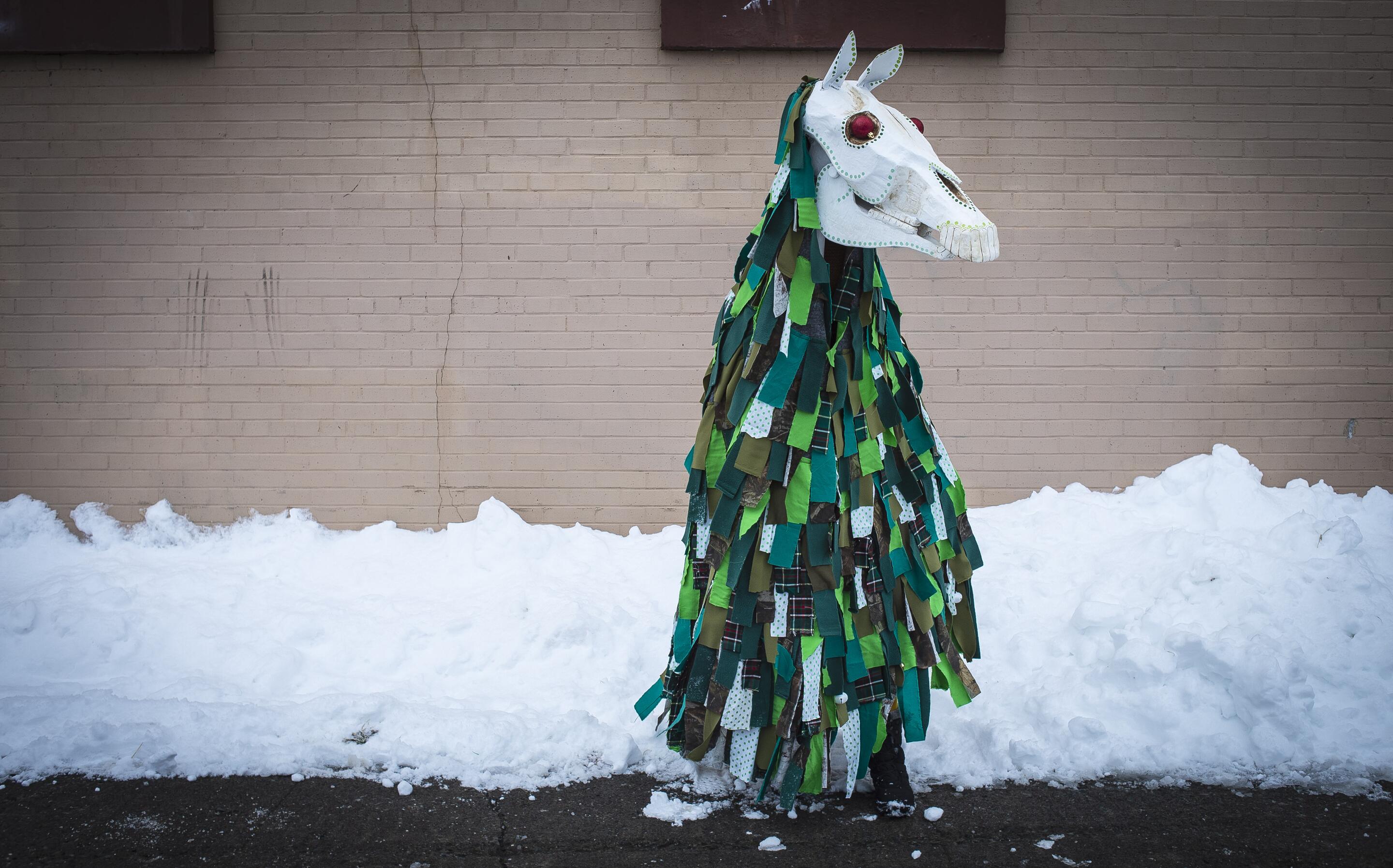 The tradition takes place during the 12 days of Christmas—the time between Christmas and old Christmas Day in early January. Mummering has existed in some form in many Western European countries (especially Ireland and West County England) since the Middle Ages, though it has largely been lost to history. But, in Newfoundland, Canada’s eastern-most province, which feels and acts very isolated from the mainland, mummering (which Newfoundlanders also call “jannying”) has flourished to the point that it’s considered an intangible cultural heritage. This year it celebrates its 200th anniversary in Newfoundland.

It’s All Fun and Games Until…

Once autumn came, and fishing nets were mended and wood was cut for the dark and lonely winter days that lay ahead, mummering was a way for communities to get together. It has largely been an innocent if mischievous tradition, but, as might be expected when people are completely disguised and alcohol is involved, things can go wrong.

“Mummers were often seen as overly mischievous and were even violent at times. People sometimes used the tradition to get even with someone they had perceived had wronged them,” said Dale Jarvis, who works as the Intangible Cultural Heritage Development Officer for the province of Newfoundland and Labrador. “If you had a grudge against someone through the year, this would be the time to carry out acts of revenge. People would carry sticks and there were numerous court cases of violence.” Once a man was actually murdered by mummers in an act of revenge.

After that, mummering was outlawed. But though that law was on the books for a very long time, says Jarvis, mummering persisted in rural communities and outports (isolated coastal communities) where it wasn’t so easy for law enforcers to oversee things.

Still, by the 1970s and 80s, the mummering tradition was waning, as the nature of communities changed. People were more mobile, so they didn’t always know their neighbors.  And they became a little nervous about letting masked strangers in their house. People had more money, too.

“Many people said that once they got carpeting they didn’t want to invite mummers,” Jarvis says with a laugh.  It was on track to becoming a memory for Newfoundlanders until 1992 when local indie music group, Simani, released “The Mummer’s Song.” The tune was a huge hit in the province, stoking nostalgia for mummer culture, and helping bring new life and new, and urban generations, to the tradition. And it helped make it legal again.

“Her old withered face lights up with a grin.

Any mummers, nice mummers allowed in

There’s only one there I think that I know

That tall fellow standing alongside the snow

Must be Willy from out on the hill.

Now that one is a stranger if there ever was one,

With his underwear stuffed and his trapped door undone

Now the one with his rubber boots on his wrong feet

He’s enough for to do him a week

“Where Underwear is Outerwear!”

Today mummering continues in the rural areas, but as Jarvis says, people tend to play it a bit safer by phoning friends ahead (with disguised voice of course to say they’ll soon be knocking at their door). In Saint John’s, the province’s capital and biggest city, the tradition is now celebrated with a festival and a parade. The Mummers Festival launched in 2009, (its tag line is: “Where Underwear is Outerwear!”) and the annual parade is a more formal version of the madcap tradition, but it still has the on-the-fly spirit. “The parade is participatory. If people don’t come out, then there is no parade,” said folklorist Terra Barrett, the Mummer’s Festival director. There are music acts, treats, and costume and hobby horse workshops (no horse skulls involved), which Barrett describes as “organized chaos.” The atmosphere of the festival and the parade is, she says, “Absolute joy. It’s really beautiful to see it all come together.” That doesn’t sound scary at all.