With apologies to Elizabeth Taylor and Richard Burton, who first put Puerto Vallarta on the travel map during the filming of Night of the Iguana in 1962, the modern jet-set has migrated north over the Jalisco state line into Nayarit, a sparsely developed riviera rich with romance and adventure. Virgin beaches line the coast, lush jungles hide five-star resorts, and endangered species thrive on wild islands. Factor in unfailingly hospitable natives, vivid local cuisine plus guaranteed gorgeous weather, and you have the ideal destination for a winter getaway in 2014. 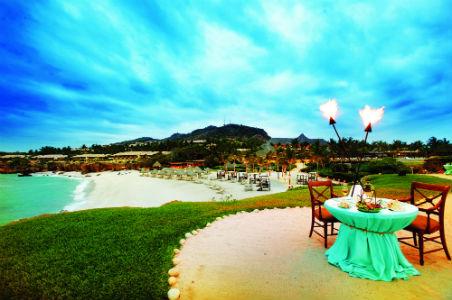 After you land at the Puerto Vallarta airport, go through customs, and locate your transfer, you’ll definitely need a pick-me-up. Break up the 45-minute drive to Punta de Mita, Nayarit’s prime resort area, with an organic, house-roasted coffee at the charming Café La Esquina (Vicente Guerrero #6B Col., Nayarit, 52/322-116-9111) in the quaint village of Bucerias.

Instead of chasing the pre-sundown rays at the pool or beach—plenty of time for that tomorrow—slip into the temple-like Apuane Spa at the tranquil Four Seasons for a couples massage. Insider tip: Ask for Rosa if you like deep work, and don’t let her small stature fool you; her powerful hands make obstinate, airplane-induced knots disappear.

Post-rubdown, it’s a short stroll through Four Seasons’ bougainvillea-fringed paths to dinner by the beach at Ketsi (average main: $20). Start with a flight of artisanal mescals from bar manager Alfredo’s personal library, then go for the avocado gazpacho with watermelon and the catch of the day, delivered direct to the resort’s beach by local fishermen. For an extra-romantic experience, the restaurant will arrange a private dinner on “the Rock,” a candlelit jetty stretching into the sea. 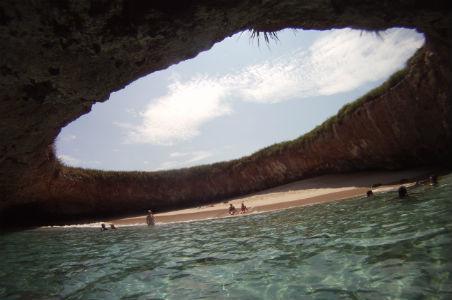 The Riviera Nayarit is stocked with outdoor activities of both land (zip-line adventures, ATV jungle tours) and sea varieties. The latter includes a half-day jaunt to Islas Marietas, a cluster of protected, cove-riddled keys just 20 minutes off the coast. Conveniently, the St. Regis offers launches directly from their beaches. Admire families of pelicans and rare blue-footed boobies preening from rocky outcrops before snorkeling into Playa Escondido. You can only access the crater-rimmed “Hidden Beach” at low tide, and only by swimming though a perilously shallow cave, but the reward is worth it to see this geological marvel. On the boat ride back, keep your eyes peeled for humpback whales, which migrate through the Bay of Banderas every winter.

Your boat returns from the Marietas around one in the afternoon, plenty of time to soak up el sol at one of the hotel’s three pools. Reward your snorkeling skills with refreshing micheladas “cielo rojo”-style: local beer (preferably a Pacifico) mixed with Clamato juice, chilies, salt, and lime. 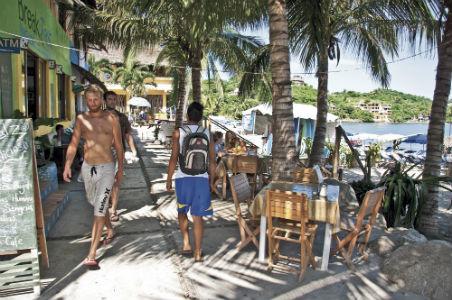 Just 20 minutes north of Punta de Mita, breakfast awaits at ChocoBanana (average main: $8), the unofficial expat clubhouse in the charmingly ramshackle surf town of Sayulita. Get the huevos rancheros and a tropical smoothie and people-watch as locals—which these days includes plenty of dread-heads who look like they got lost on their way to Venice Beach—prowl the main plaza.

Sayulita’s colorful streets are a shopper’s paradise. Pick up souvenirs at chic boutiques like Revolucion del Sueño (pillows and tees in graphic-design-geek prints, giant beach bags for 50 pesos) and La Hamaca (Day of the Dead dolls, namesake hammocks in a rainbow of shades). Members of the Huitchol, the native tribe famous for their intricate beadwork, have stands right on the plaza selling earrings, bracelets, and coin purses. Insider tip: Omnipresent jaguar figurines make lucky souvenirs; the cat is a sign of protection in Nayarit, where statues are often placed outside peoples’ homes. 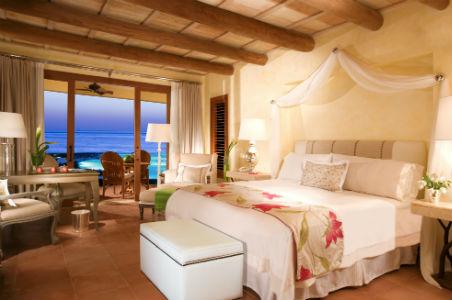 Only two hotels nestle in the lush gated peninsula of Punta de Mita proper: the Four Seasons (rooms from: $780) and the St. Regis (rooms from: $455). The gracious Four Seasons has the advantage on service and solitude, with two stunning beaches and unassuming casitas that feel earthy and natural, while the St. Regis injects subtle glamour with edgy paintings from Mexico City artists, chic furniture, and bursts of watermelon pink to contrast with the resort’s palette of stingray and sand.

High season in Nayarit begins in November and runs through March. During this stretch, dry, sunny, 80-degree days follow comfortable nights—though keep in mind that room rates peak during the holidays. Visit later, in February and March, for the same sublime weather and the year’s best whale-watching without the Christmas crowds.

By plane: From LAX, daily direct flights on Delta and Alaska run three hours and change to Puerto Vallarta, the gateway to the Riviera Nayarit. Plan to arrive in the afternoon, in time to catch the sunset. Insider tip: Punta de Mita, Nayarit’s prime resort, is about 45 minutes from the airport, so save time by booking transfers in advance—Tropical Incentives is a very reliable company—and avoiding the gauntlet of timeshare charlatans waiting on the other side of baggage claim.

Adam Erace writes about food, drink and travel for Fodor’s and magazines like Details, Southern Living and Men’s Journal. He loves exploring far-flung destinations and their regional specialties almost as much as his hometown, Philadelphia, where he lives with his wife and two rescue pups.