From Caye to Cayo: Top 4 Experiences in Belize 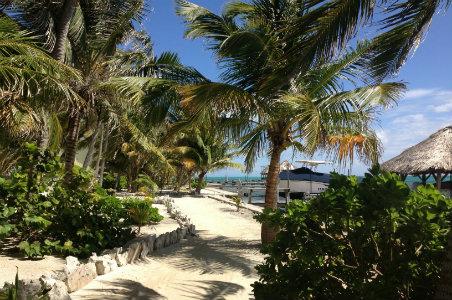 The Cayes and the Cayo. Typographically, they may be very similar, but topographically these distinctive regions in Belize are worlds apart.

The Cayes (pronounced “keys”) are the hundreds of islands that stretch the length of Belize’s coast, ranging from tiny spits of sand and tangled networks of mangrove, to the 25-mile long Ambergris Caye. About half the size of Barbados, Ambergris is a laid-back Caribbean beach town with a decidedly “no shoes, no shirt, no problem” attitude. On its narrow, sandy roads numerous “Go Slow” street signs maintain an orderly flow of golf-cart traffic (there are no car rentals here), while on the water dozens of speedy boats and water taxis whisk vacationers to beachside resorts and some of the best dive and snorkel spots in the world.

The Cayo District is western Belize’s rolling, mountainous region, covered with broadleaf jungles that harbor ancient Mayan sites. Nearly two-thirds of the Cayo lies within national parks and forest reserves, creating protected lands that are a haven for hikers, cavers, canoeists, kayakers, and birders. With more than 30 jungle lodges, the Cayo has more close-to-nature accommodations than any district in Belize.

Together the Cayes and the Cayo are the first- and second-most visited areas of Belize. But neither is overcrowded, so it’s relatively easy to plan a vacation that takes in the best of both. Here are four of our favorite experiences for a memorable “surf and turf” itinerary in Belize.

Let’s dive right in—or rather under. Actun Tunichil Muknal (ATM) is one of the Cayo District’s many cave systems. But ATM is a special cave because of how special and sacred it was to the Mayans, who considered it to be a literal passage to their gods’ grace. Mayan clergy believed that the deeper into the cave they traveled with offerings and sacrifices, the more likely they were to elicit a favorable response from their gods, whom they relied on to provide rain and grant agricultural fertility. As our guide put it after we had journeyed for more than an hour through ATM's passages, “Any pottery you see here must have been for a really dry season!” Indeed, to reach one of the far rooms littered with artifacts, we had to wade through hip-deep water, scramble up and down slippery rocks (often using our five points of contact: hands, feet—and buttocks!), and squeeze through narrow crevices.

With our high-powered headlamps and compact backpacks, it was hard to imagine a group of Mayan clergy with faltering torches, heavy pottery, and unmotivated sacrifices making the same journey. Relics of their arduous travels, including the skeletal remains of a young female sacrifice known as the Crystal Maiden, are often close enough to tread over if you're not careful. As you wander through the eerie chambers of the Cave of the Stone Sepulcher, as ATM is also known, passing beneath its sparkling crystal walls and dripping limestone stalactites, you begin to feel a sense of the supernatural weight that filled the Mayans with both dread and hope. 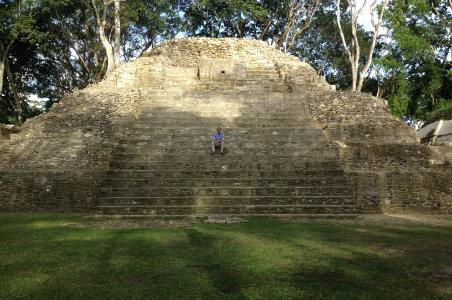 Admittedly, we’ve seen more impressive Mayan sites in the Cayo than Cahal Pech. (Caracol, once a sprawling metropolis, to Cahal Pech’s modest settlement, comes to mind.) But Cahal Pech possesses a quiet beauty, and there’s a casual ease to the site that makes it remarkably inviting. We squeezed in a visit rather last-minute, and perhaps because it felt almost like an afterthought—“Hey, we’ve got an hour or two to kill, might as well go to Cahal Pech”—we weren’t expecting much. What we wandered in to, after paying only $5 and walking no more than a couple hundred yards from a non-descript parking lot, was astounding.

Cahal Pech began as a solitary farmstead around 1200 BC and over the centuries grew to a hamlet and eventually a small citadel. Pretty much hidden in plain sight right outside San Ignacio, its ruins form a jungle-like scramble of geometric stairs that lead to multiple chambers and rooms. The main structure rises some 60 feet high. Oftentimes you can freely explore this site with few to no other visitors. There’s a small visitor center, and if you want a guide you can hire one. But Cahal Pech is set up more like a small park than an archeological site. You can climb its steps, walk through its chambers, and simply sit and contemplate its ancient architecture with no agenda other than leisurely curiosity.

Here's another easily accessible site that exceeds expectations. A 20-minute boat ride from most of Ambergris, Hol Chan Marine Reserve is a very popular snorkel spot, frequented by resort guests and cruise passengers alike—not exactly attributes that promise a special experience, particularly if you're of the opinion that the best snorkel spots are usually found in secluded coves away from the crowds. Yet Hol Chan is a lavish host to all who visit, displaying a generous assortment of coral and fish. It's a diverse ocean habitat inside the mighty Belize Barrier Reef, where one moment you float just above soft coral that gracefully dances within reach and the next, you drift high over sprawling sea canyons and valleys. Fishing is off-limits within the 21-square mile reserve, so the marine life—which includes butterfly fish, parrotfish, yellowtail snappers, and much more—freely dart and feint around you, often tantalizingly close.

And then there are the sharks! At a sandbar within Hol Chan known as Shark-Ray Alley, you can snorkel among dozens of nurse sharks and stingrays. Swimming alongside these benign, yet naturally menacing-looking creatures, is surreal and exhilarating. Hol Chan delights veteran snorkelers and dazzles beginners. And the crowds aren't that hard to avoid. Most times of the year, you can beat them simply by arriving before 9 am.

The beachfront on Ambergis Caye is lined with a variety of accommodations from boutique resorts to budget hotels to large “condotels.” Each property is linked by a more than 8-mile, single-track biking/walking trail that skirts the surf. You'll often see locals zipping back and forth this sandy byway, commuting to and from work. The narrow path begins and ends at the edge of San Pedro Town, but you can get on at any point along the shore. It's a fantastic way to take in the numerous beachscapes of Ambergris.

From almost any starting point you’ll pass a series of exotic tropical paradises with coco-palm shaded casitas, happening palapa bars such Rojo Beach Bar, and the occasional neglected strand awaiting development. The path can be a bit challenging to navigate in places, but if you take it at a relaxed pace, you can enjoy a breezy survey of the island's coast. Note: Sunscreen and water for any journey along this path are a must, particularly if you go during the peak heat of the day, which is not recommended. 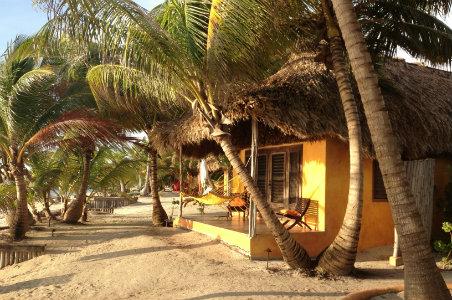 Two of our favorite home-bases for exploring the Cayes and the Cayo are Matachica Resort & Spa and Ka'ana Resort. Both properties have made the most of their lovely surroundings with beautiful grounds that tame the natural environment without over-manicuring it. Both properties distinguish themselves with outstanding service and knowledgeable staff who can help you arrange all your excursions. (For a trip to ATM this is critical because it's a highly protected area with tight visitor restrictions. Currently there are only 33 guides in Belize certified to lead ATM tours, and Ka'ana works with them to PLAN YOUR TRIP.)

Matachica provides free bikes, and at their front desk they maintain a large activity board for efficient scheduling of private and group tours to Hol Chan, as well as dive sites further offshore such as the famous Blue Hole.

Eric Wechter is a travel editor for Fodor’s, specializing in cruises and resorts. Follow him on Twitter: @ebwechter.