Reindeer Herding With the Sami of Sweden 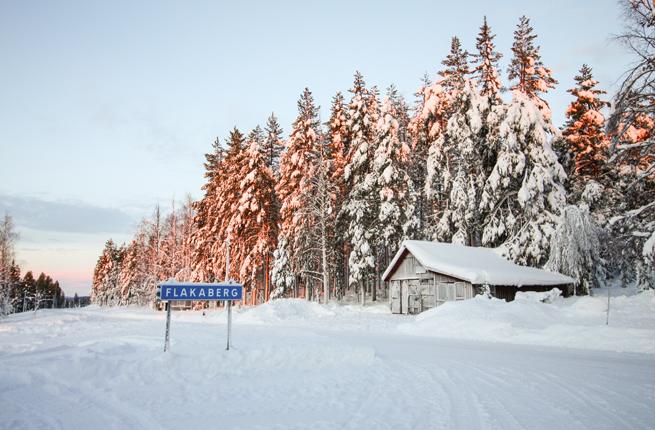 At 10 a.m., the sun had just risen in Northern Sweden. A pinkish red light blushed on the horizon. At this time of the year, the snow was so high it covered the street signs. The road north seemed endless: a straight line flanked on each side by birch and pine trees. We drove for miles before we saw another car, a small sedan with a bar of floodlights mounted on the roof. There aren’t many streetlights in the forest.

By the time we arrived in Flakaberg from our hotel in Harads, it was 1 p.m. and the sun had already begun to set. A blue sign on the side of the road let us know we were at the right place: Flakaberg, marked by a cluster of wooden cabins where indigenous people, the Sámi, lived and herded reindeer. The Sámi are the only indigenous population living within the European Union. They are spread across Sweden, Finland, Norway and Russia, an area they call Sápmi. In Sweden alone, there are between 20,000 and 40,000 Sámi people. 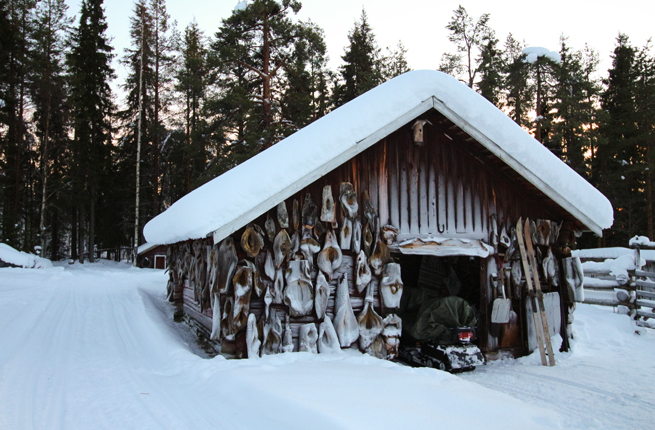 We were greeted by Lars Eriksson, a tall man with a white beard dressed in traditional Sámi attire. Grandfatherly in age, he emitted the warmth and charm of Santa Claus. Eriksson wore a gátki, a navy blue jacket with green, yellow, and red details paired with brown leather pants. The jacket fastened at the waist with a brown leather belt from which hung two knives hand-carved from reindeer bone. While the colors of clothes and outfits mostly remain the same across Sámi regions, the design and accessories change dramatically from one region to the next, identifying their origin, even down to the village, upon sight. 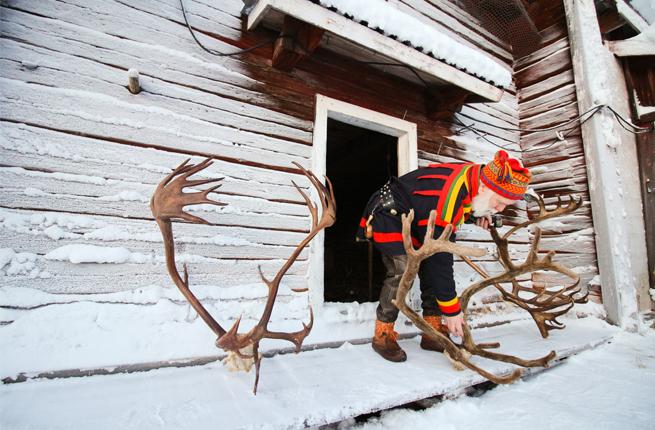 Eriksson has lived here his whole life. Today, he and his wife live in a house just a few steps from the one he was born in. Like many Sámi, he has dedicated his life to reindeer herding, which has been tough business lately. Because of how much herding has changed, Eriksson and his wife, Anette, have refocused from reindeer and dedicated themselves to sharing Sámi history, culture, and way of life through a small organization for cultural tourism called Årstidsfolket. Tourists can visit Eriksson’s village to experience reindeer herding and Sámi culture firsthand. 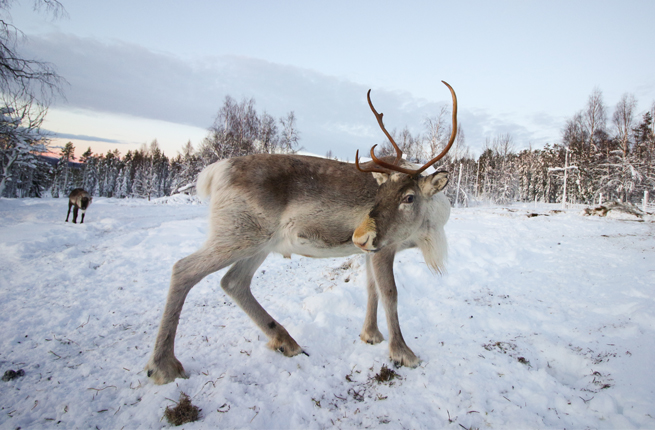 I’d arranged the trip to visit the Sámi via CreActive Adventures Sweden. For SEK 2360 (about $265 USD), a guide drove me from the adjacent town of Luleå to Flakaberg for our day visit with the Erikssons. These tours vary by season but always include a visit with the reindeer and an opportunity to experience Sami food: In the summer, each visit ends with a homemade meal around a campfire in a traditional wooden tipi. During the winter, a typical Sami lunch is served inside the wooden cabins.

The recommend time to visit is between December and March since from April to October, the reindeer are released into the wild and come and go as they please. Each group of visitors ranges between 4 to 8 people, and on average the Sami receive about 100 guests each winter. 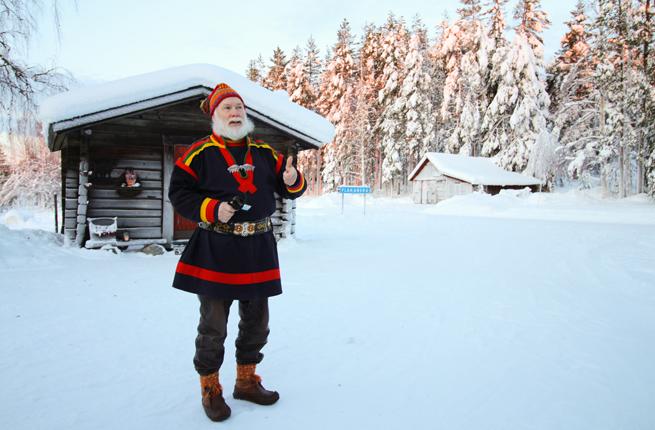 The cabins in the Sami village each have their own unique personality. One had a series of woodcuts carpeting the façade. Another had a small sign on the entrance “Café Nord”, and a third one had a red door. Outside one of the cabins, Eriksson showed us his wooden skis.

“When I started, I had no modern things,” he said and pointed to his feet. “Only these two.”

Traditionally, the Sámi followed their reindeer by foot and on such handmade wooden skis. They live a semi-nomadic lifestyle, following their herd. Lars explained how when he first began herding, stayed out in the forest for days. But now, next to the skis sat a snowmobile. Today, herders follow the reindeer using snowmobiles and GPS technology. 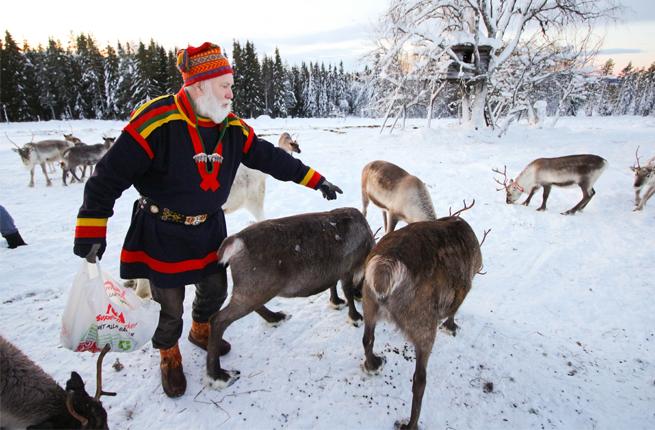 In a nearby field, Eriksson called his reindeer to lunch. He let out a big holler and waited. At first, nothing moved in the line of trees hundreds of feet away. Slowly, one by one, the reindeer peeked out from behind the trees. They dashed across the field playfully, hoping for a bite of fresh hay. Eriksson handed each of us a bit of hay. The reindeer curiously darted around us before marching over, wide-eyed and eager, to eat from our hands. After munching, they disappeared into the woods once again.

According to Eriksson, the reindeer don’t live as long as they used to. The climate has changed, limiting the availability of their food. Modern living is also affecting their habitats, such as salting of the roads in winter and deforestation. 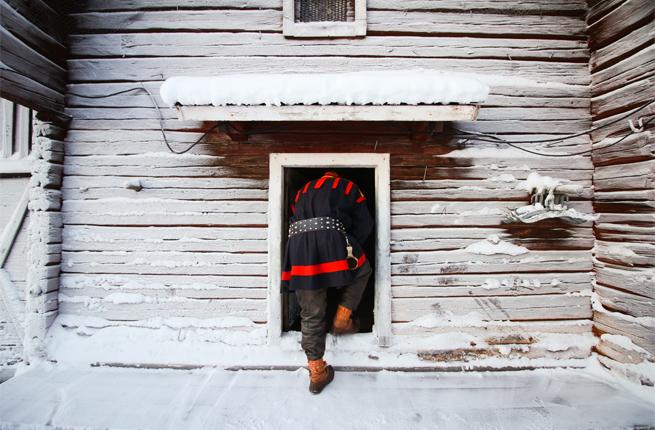 By mid-afternoon, darkness had taken over. Our small group of six people sat inside one of the warm cabins: an older couple and their teenage son, who had camped out in the Arctic circle the night before, a newlywed couple, and me, a single female traveler with a big camera. We ate a meal of reindeer and moose meatballs with mashed potatoes, cooked by Anette. A sweet lingonberry sauce perfectly balanced the savory and tender flavor, and the velvety mashed potatoes made me feel warm and cozy, even as the snow started to fall. As Eriksson went for a fresh pot of hot coffee, I asked our guide for the Sámi word for thank you. Nowadays, Sámi are defined primarily by their language. A person can often detect their origin by whether their first language is Sámi, or one of their parents’ or grandparents’ first language was Sámi. The Sámi language itself is also diverse, with multiple dialects derived from it in different regions. 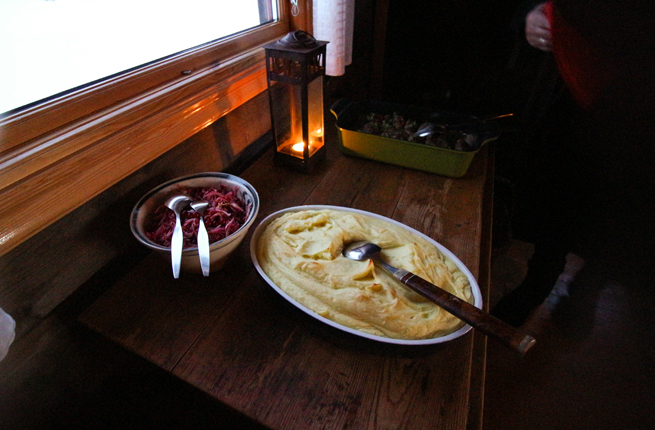 Eriksson opened the door of the cabin and a cold breeze came rushing in. It was pitch black outside, even though it was only three in the afternoon: a typical winter in Northern Sweden. We lingered over warm coffees, craving more stories. Eriksson showed us a traditional hand-carved tool used to drink water, and a hand-carved knife made of reindeer bone. In the Sámi culture, every part of the animal is used: meat, fur, and even bone, producing as little waste as possible. And while much has changed for the Sámi, one thing remains the same. As Eriksson showed us again and again with his tools, meals, home, and work, the Sámi adapt their lifestyle to nature instead of the other way around: following the cycles the seasons, living harmoniously with the animals, and leaving no trace in the wild.

PLAN YOUR TRIP with Fodor’s Guide to Sweden