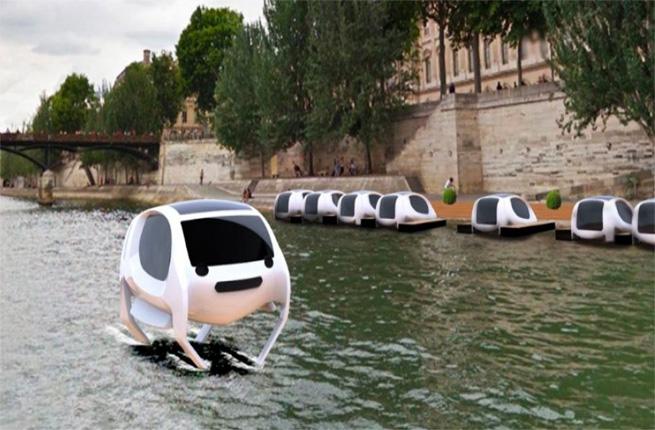 The people of Paris will have a new mode of transportation, starting this summer: using their phones to order a flying water taxi to pick them up and sail them down a river.

This summer, SeaBubbles is set to debut their new mode of environmentally conscious transportation: a little water taxi that will pick people up and take them on their way down the Seine River—sans pollution emitted by a regular car. So it’s like Uber or Lyft, but for rivers, and with less pollution.

The vehicles, which were designed by Alain Thébault and Anders Bringdal, and which also resemble little robots with a pleasant look on their faces, are powered by a battery-driven propulsion system and have “wings” underneath the surface of the water—which make it seem like the SeaBubble is flying. Because of these “wings,” they vehicles generate no waves whatsoever and silently glide along the river at up to 20 miles per hour, with a 50-62 mile range. The prices will be much like Uber or Lyft prices, making it an easily comparable option of travel for Parisians if they don’t want a regular car to take them somewhere—or if they prefer a greener way of getting around. And if they happen to be going somewhere within walking distance of the Seine River, of course.

SeaBubbles believes that water taxis can curb pollution levels while also giving people a quick option to get around town. Anne Hidalgo, the mayor of Paris, supports SeaBubbles and their cause. “I really believe in the development of river transport. Most of the world’s big cities were built on riverbanks, an advantage we have to use to reduce our reliance on polluting cars,” Hidalgo said.

Plus, look at them. They’re cute. Who wouldn’t want to glide around in one of these little guys?