Brussels’ iconic Manneken Pis has 1,046 costumes and even its own dresser. Yet, could it be a template for all other city statues?

At the height of the COVID-19 crisis in Brussels, when no one was looking, pranksters crept behind the tiny wrought-iron barrier that shields the capital’s famous Manneken Pis statue and slipped a PPE mask around its face.

In the days following, regional and international coverage of the city recycled this image endlessly. It was the perfect symbol for the direst of times, not to mention the famed coffee-black Belgian sense of humor at work.

Few non-locals realized, however, that in a time of statues being masked around the world, this was hardly a unique event for Brussels. Days later, the city had supplied its own mask to the statue in support of its volunteers. A month later, as lockdown forced the capital’s Gay Pride parade to be canceled, the tiny putto (cherub) donned a Pride outfit, designed by Jean Paul Gaultier, and wore a rainbow-colored mask in solidarity.

This was just the tip of the iceberg. The Manneken Pis currently has 1,046 unique costumes—not counting masks. There are so many that, not only does the statue have its own “Official Dresser,” the city even built a museum, the GardeRobe MannekenPis, in 2017 to double as its show-closet.

More pertinently, at a time when the public monuments of major cities are coming under scrutiny for what they represent, this tiny statue speaks to our times. What began as a tradition of dressing the Manneken Pis for special events has, over the last century, moved more toward awareness-raising, tackling everything from homelessness and gay rights to safe sex. And while the sight of a stone cherub decked-out in a two-foot-high knitted prophylactic might draw smiles, the roots of all this are buried deep in Brussels’ past.

A Statue Can Never Have Too Many Outfits

Gonzague Pluvinage is a historian and the curator of the Manneken Pis collection at Brussels City Museum, where the original statue resides (the one at the corner of rues Chêne and l’Étuve is a replica, created in 1965 after one too many historic thefts). Pluvinage also looks after its oldest surviving costume, commissioned in 1747 by French king Louis XV as an apology for his invading forces’ theft, and subsequent return, of the statue. But despite this being the oldest original outfit, it was far from the first.

“We know from documents that [the statue] received [other costumes] before this one, but how many we don’t know… The first proof of the existence of the tradition of dressing the statue is a painting from 1616,” Pluvinage explains. “Between the 17th century and 1914, it was dressed around five times a year for religious and social events.”

This was a different era. Costumes were donated solely by city authorities and governing generals, many of whom were new to town and keen to curry favor. After World War I, however, that all changed as the nature and number of donors diversified. 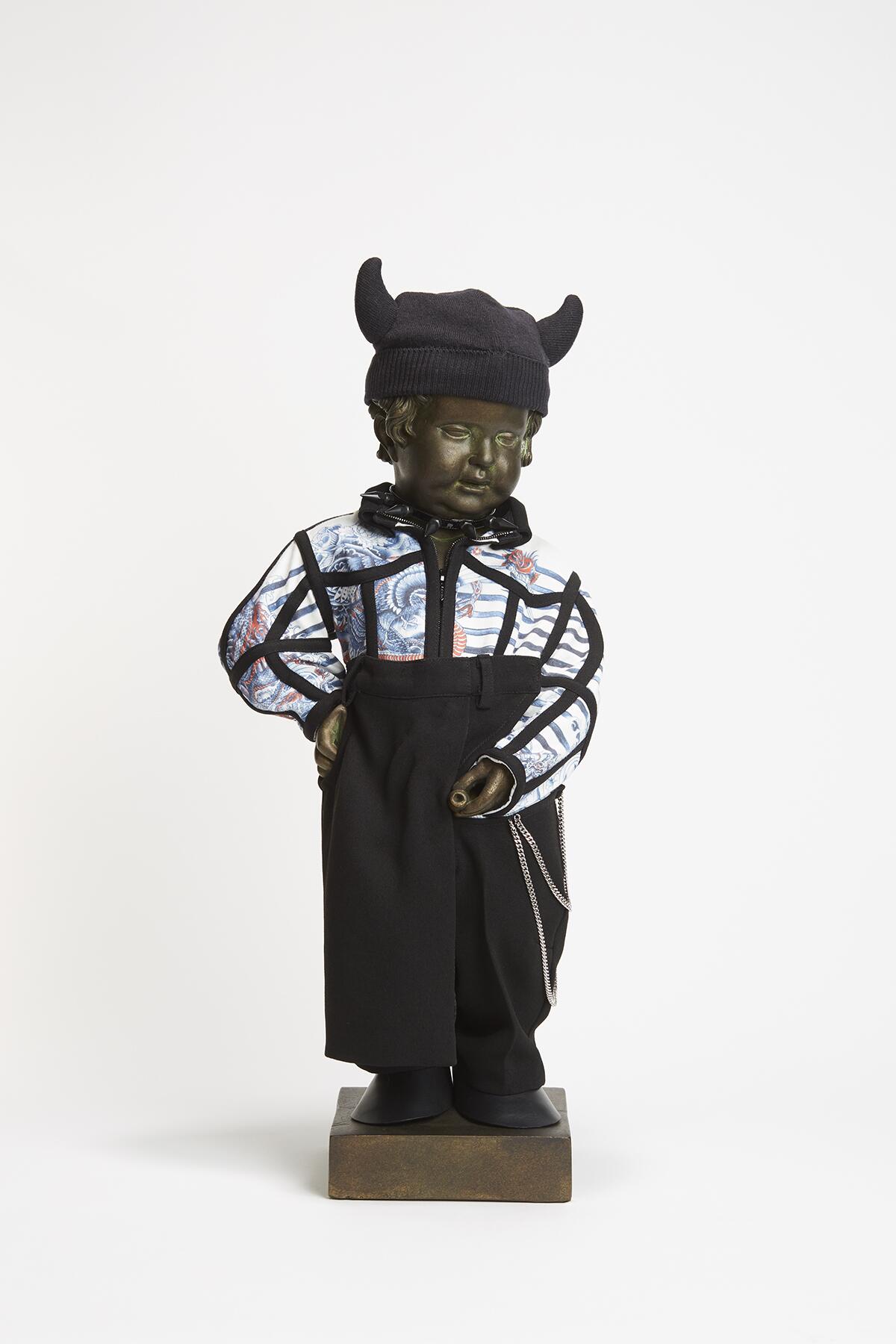 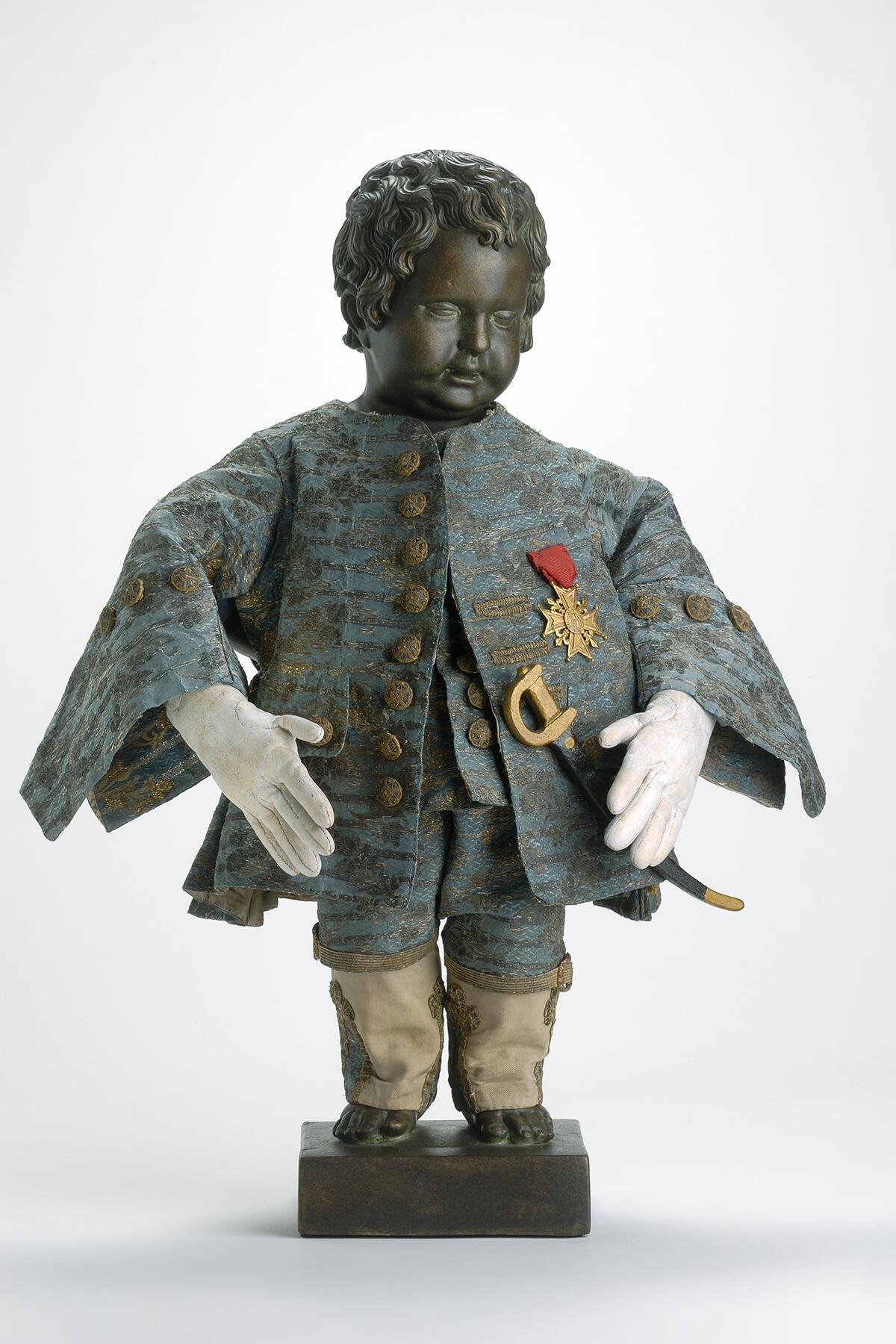 1. The Manneken Pis is ready for the runway in this Jean Paul Gaultier look.E. Laurent; 2. An outfit that wouldn’t look out of place in Louis XIV’s closet.Peeters

“Until then, the statue received maybe one costume a year; then two-to-three during the 1930s; around 10 in the ’40s…and from the 1980s until today, it gets around 25. It was also then that associations began to donate them,” says Pluvinage.

Following the end of the German occupation of Belgium in 1918, fittingly, the first donation came from the 19th French Infantry Battalion that helped liberate the city. Organizations such as Baden Powell’s Belgian Scout Commission followed suit in the 1920s, paving the way for the Pride links, homeless charities, and causes that followed.

Of course, there have been controversies, too. Folkloric costumes, such as the troubling “Noiraud,” which is worn annually to mark a local tradition that began in 1876 in which participants paint their faces black for the sake of “anonymity” while collecting for charity, inevitably and necessarily are being reexamined as hurtful and harmful displays. So, when the Noiraud association finally bent to public opinion (following a tsunami of social-media outrage after a then-prominent Belgian minister took part) and incorporated the red and yellow of the national flag into the corner of their face make-up in 2019, the statue updated to a similar mask. However, the Noirauds’ new three-quarter blackface remains troubling and is prompting new questions for the Belgian public in light of 2020’s worldwide Black Lives Matter protests.

It wouldn’t be the first instance of locals revolting at their icon’s wardrobe. Outrage in 2019 at plans for it to wear a new Michael Jackson costume, to commemorate the 10th anniversary of the singer’s death, saw the outfit “received” but subsequently banished in the wake of the artist’s latest child abuse allegations. The statue itself might be an ideological blank slate, but in more self-examining times, people are increasingly willing to speak up about what, and whose colors are pinned to the symbol of their city.

The Man With the Jacket

Months before Brussels’ March shutdown, I encountered a man for whom all this is a day’s work. Nicolas Edelman is more commonly found ascending a tiny ladder to fasten the latest creation onto his 55cm-high muse. What’s more, as the statue’s “Official Dresser,” he’s the only one allowed to do so.

We meet inside the GardeRobe Museum, flanked by an Elvis, a Dracula, and two tiny Nelson Mandela outfits. To my left is a sea of mini national costumes gifted by eager embassies clearly unafraid of stereotyping; and yes, there’s even that “condom outfit,” created for World AIDS Day. “It looks like a cross between Homer Simpson and a fish,” Nicolas later confides.

What began as a tradition of dressing the Manneken Pis for special events has, over the last century, moved more toward awareness-raising, tackling everything from homelessness and gay rights to safe sex.

Later that day he was due to erect a costume for Opération Thermos, a charity that supports the homeless, just as the temperatures outside were plummeting. But before he took over this job in 2014, becoming the 13th person to hold it, he had no idea any of this existed. Indeed, most Belgians have never heard of the role.

“I didn’t know much about the Manneken Pis before this. It was not my dream,” he told me. “But I love my job.”

It certainly keeps him busy, with typically 130 events normally held every year. But the odd celebrity encounters aside (he giggled at recalling Jean Paul Gaultier’s design query of what to do “with all the water and the pee”), the job is mostly logistics. It’s the city that approves the outfits, vetoing any with political, religious, or commercial purposes.

That’s not to say the role doesn’t have its perks. Halfway through our chat, Nicolas swiveled to reveal one in particular: there on the back of his black jacket beneath the glossy outline of a micturating cherub, were the words “Official Dresser,” written as large as the grin on his face.

One of Their Own

The Manneken Pis has always raised a smile among locals, for whom its tiny size and weak bladder are typically disproportionate to the hordes of tourists clustered around it. But as Gonzague Pluvinage argues, the statue itself is a positive symbol for our times, as it has been throughout history. 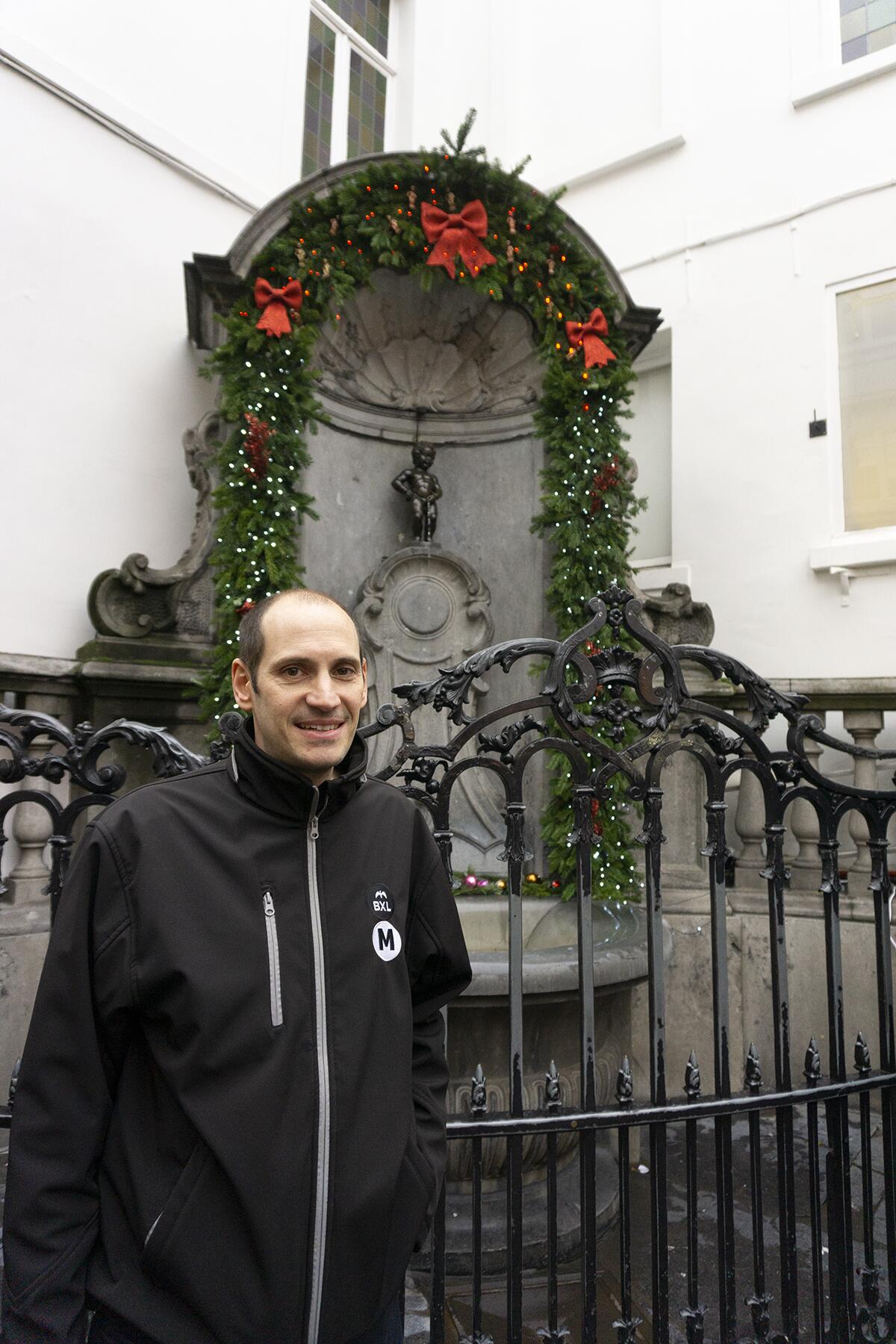 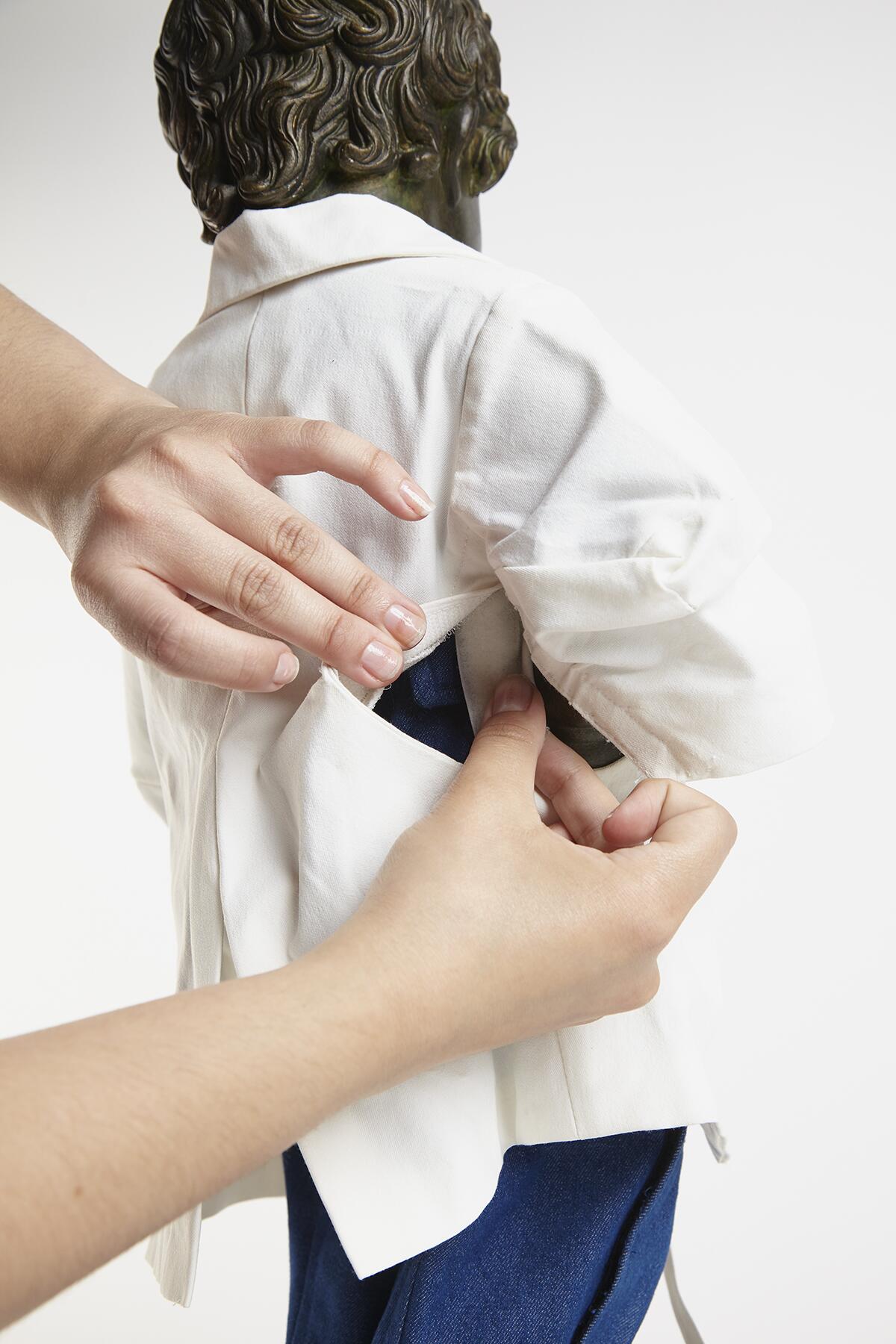 1. Nicolas Edelman, the “Official Dresser” of the Manneken Pis.Gareth Clark; 2. Edelman is the only person allowed to apply clothes to the statue.E. Laurent

“Back when it was first installed (around the 15th century), it was a popular motif, a symbol of abundance and fertility…then the people of Brussels started to make him one of them,” said Pluvinage.

History is full of examples of the city coming to its beloved icon’s defense, and vice-versa. The earliest is an anonymous satirical account published after France’s Louis XIV bombed Brussels to a standstill in 1695. It positioned the statue as a voice for the people, speaking out against the monarch. And lest we forget, it was the theft of the Manneken Pis under Louis’s successor that proved the final straw for war-weary locals in 1747, forcing the king’s mea culpa and the donation that kickstarted its wardrobe.

While Brussels, like other cities, wrangles with its colonial past, visible across the capital in monuments to King Leopold II (under whose reign Belgium ransacked the riches of the Congo), one statue offers hope for a more inclusive bridging of history and the present. Its outfits may be funny, clumsy, helpful, even controversial, but they also reflect the values of the world around it, updating in tandem. Should every city have a statue with an outfit for every occasion?