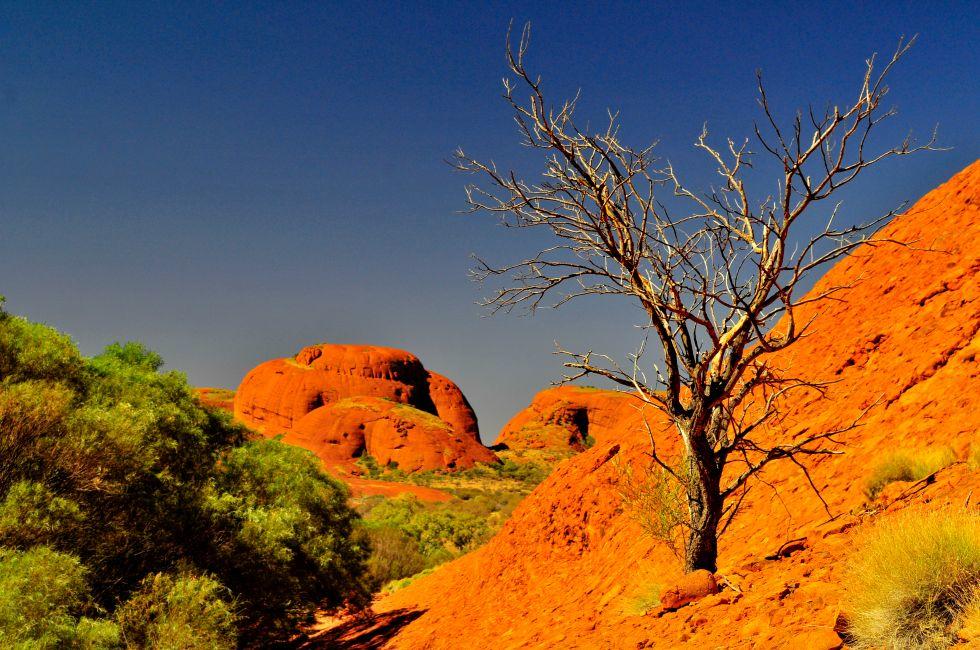 The light in the Red Centre—named for the deep color of its desert soils—has a purity and vitality that photographs only begin to approach. For tens of thousands of years this vast desert territory in the south of the Northern Territory has been home to Australia's Aboriginal people. Uluru, also known as Ayers Rock, is a great symbol in Aboriginal traditions, as are many sacred sites among the Centre's mountain ranges, gorges, dry riverbeds, and spinifex plains.

The essence of this ancient land is epitomized in the paintings of the renowned Aboriginal landscape artist Albert Namatjira and his followers. Viewed away from the desert, their images of the MacDonnell Ranges may appear at first to be garish and unreal in their depiction of purple-and-red mountain ranges and stark-white ghost gum trees. Seeing the real thing makes it difficult to imagine executing the paintings in any other way.

Uluru (pronounced oo-loo-roo), that magnificent stone monolith rising from the plains, is but one focus in the Red Centre. Kata Tjuta (ka-ta tchoo-ta), also known as The Olgas, are another. Watarrka National Park and Kings Canyon, Mt. Conner, and the cliffs, gorges, and mountain chains of the MacDonnell Ranges are other worlds to explore.

The primary areas of interest are Alice Springs, which is flanked by the intriguing Eastern and Western MacDonnell Ranges; Kings Canyon; and Uluru–Kata Tjuta National Park, with neighboring Ayers Rock Resort. Unless you have more than three days, focus on only one of these areas.

Go on an Australian Vacation From the Comfort of Your Own Home
Qantas has launched a VR experience that offers an unprecedented exploration of the country’s most beautiful sights.

Uluru 101: Everything You Need to Know About Visiting Australia’s ‘Red Centre’ Monolith
Standing 1,150 feet high, with most of its bulk hidden underground, Uluru forms the centerpiece of Uluru-Kata Tjuta National Park, a World Heritage Area jointly managed by Parks Australia and the traditional Aboriginal landowners, the Anangu.

World’s 15 Most Scenic Train Rides
Some of the world’s most beautiful destinations are also home to scenic train rides traversing snow-capped peaks and orange-hued deserts.