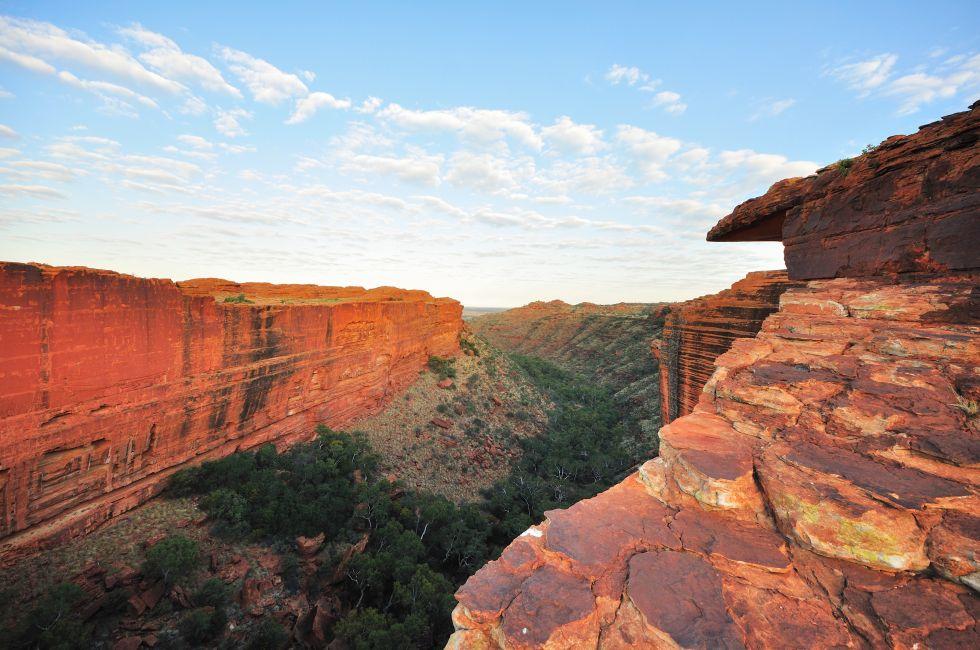 Few visitors who explore Australia's remote Red Centre and wild Top End are left unmoved by the stark, expansive beauty of the landscape. The Outback's amazing World Heritage national parks, many on the ancestral homelands of the traditional indigenous owners, are home to some of Australia's most fascinating and iconic natural attractions, such as Ulruru (Ayers Rock), the magnificent Bungle Bungles, and the vast bird-filled wetlands and raging waterfalls of Kakadu. The Outback contains deeply carved rock canyons, deserts with unending horizons, and prolific wildlife. It is Australia at its wildest, rawest, and most sublime, and it's a landscape that will sear itself onto your memory forever.

The Top End of Australia is a geographic description—but it's also a state of mind. Isolated from the rest of Australia by thousands of miles of desert and lonely scrubland, Top Enders are different and proud of it, making the most of their isolation with a strongly independent and individualistic attitude. The region is a melting pot of cultures and traditions. Darwin and Broome—closer geographically to the cities of Southeast Asia than to any Australian counterparts—host the nation's most racially diverse populations: Aborigines, Anglos, and Asians share a tropical lifestyle.

In the west, the Kimberley offers some of the most dramatic landscapes in Australia. A land of rugged ranges and vast cattle stations, the Kimberley is still the frontier, a place even few Australians get to see. Like Top Enders, the people of the Kimberley region see themselves as living in a land apart from the rest of the nation, and it's easy to see why: climate extremes, inaccessibility of the landscape, and great distances combine to make the Kimberley one of the world's few uniquely unpeopled spaces.

For thousands of years this area of northern and central Australia has been home to Aboriginal communities that have undiminished ties to the land. Stunning examples of ancient Aboriginal rock art remain—on cliffs, in hidden valleys, and in city art galleries and cooperative art centers in remote communities. Aboriginal artwork has now moved into Australia's mainstream art movement, and some expensive canvases by Aboriginal artists decorate galleries, homes, and corporate boardrooms around the world. But there is more to Aboriginal culture than art, and there is no better place to try and understand it than here, on a guided tour of some of the country's most spiritually significant Aboriginal sites.

Darwin is Australia's most colorful, and exotic, capital city. Surrounded on three sides by the turquoise waters of the Timor Sea, the streets... This national park is a jewel among the Top End parks, and many visitors come to the region just to experience this tropical wilderness. Beginning... Once a ramshackle collection of buildings on dusty streets, Alice Springs—known colloquially as "the Alice" or just "Alice"—is today an incongruously...

It's easy to see why the Aborigines attach spiritual significance to Uluru (Ayers Rock). It rises magnificently above the plain and dramatically... Broome is the holiday capital of the Kimberley. It's the only town in the region with sandy beaches, and is the base from which most strike...

Halfway between Purnululu and Broome, Geikie Gorge, an ancient flooded reef, is one of the highlights of a trip through the Kimberley. ... Kununurra is the eastern gateway to the Kimberley. With a population of around 6,000, it's a modern, planned town developed in the 1960s for...

This park covers nearly 3,120 square km (1,200 square miles) in the southeast corner of the Kimberley. Australians of European descent first...

Officially called Nitmiluk, the Aboriginal or Jawoyn name for the cicadas associated with the creation stories of the area, this stunning canyon...

The light in the Red Centre—named for the deep color of its desert soils—has a purity and vitality that photographs only begin to approach....

The West MacDonnell Ranges—stretching westward from just a few kilometers outside Alice Springs for around 200 km (125 miles)—are a spectacular...

Perched on the northwestern hump of the loneliest Australian state, only half as far from Indonesia as it is from Sydney, the Kimberley remains...