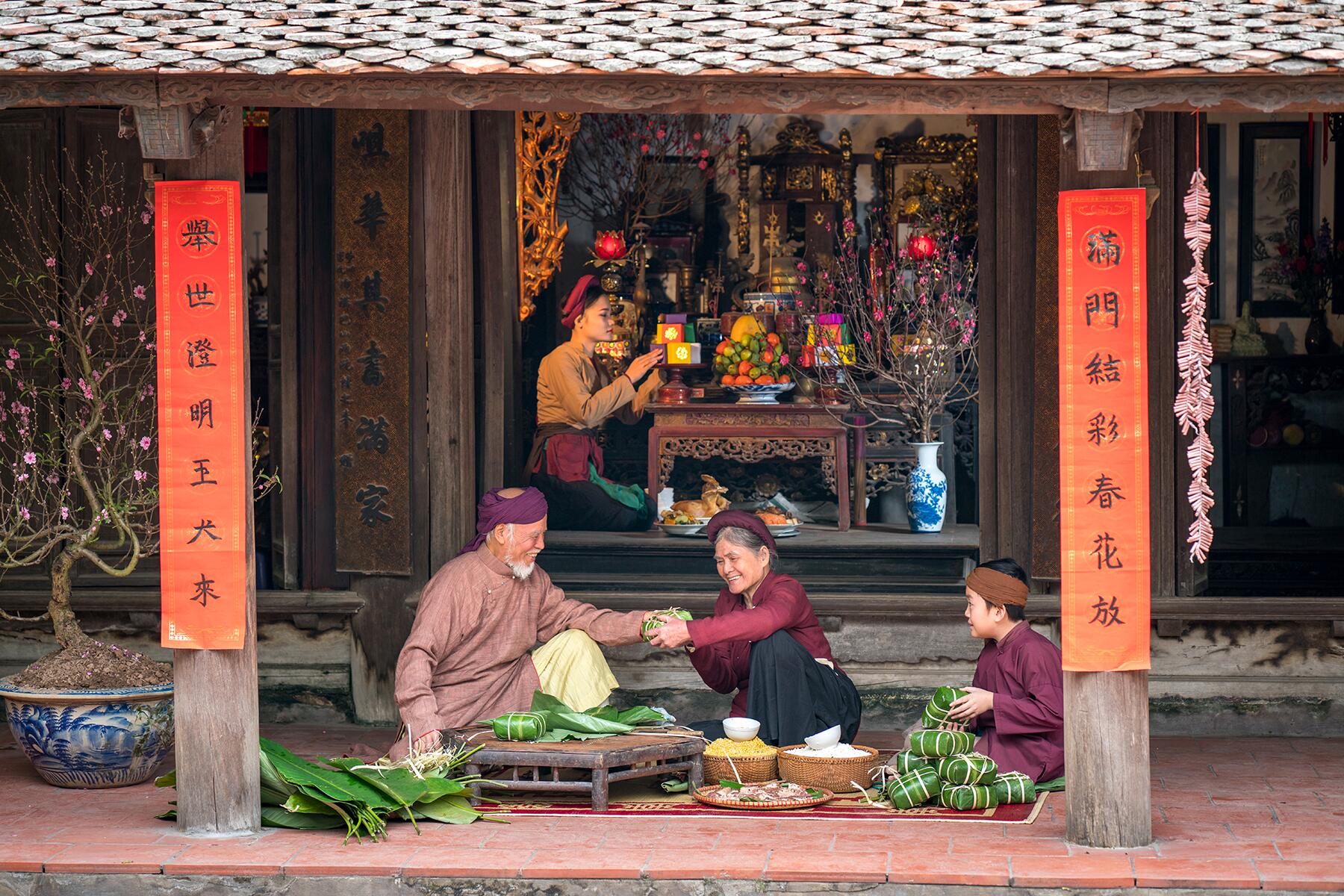 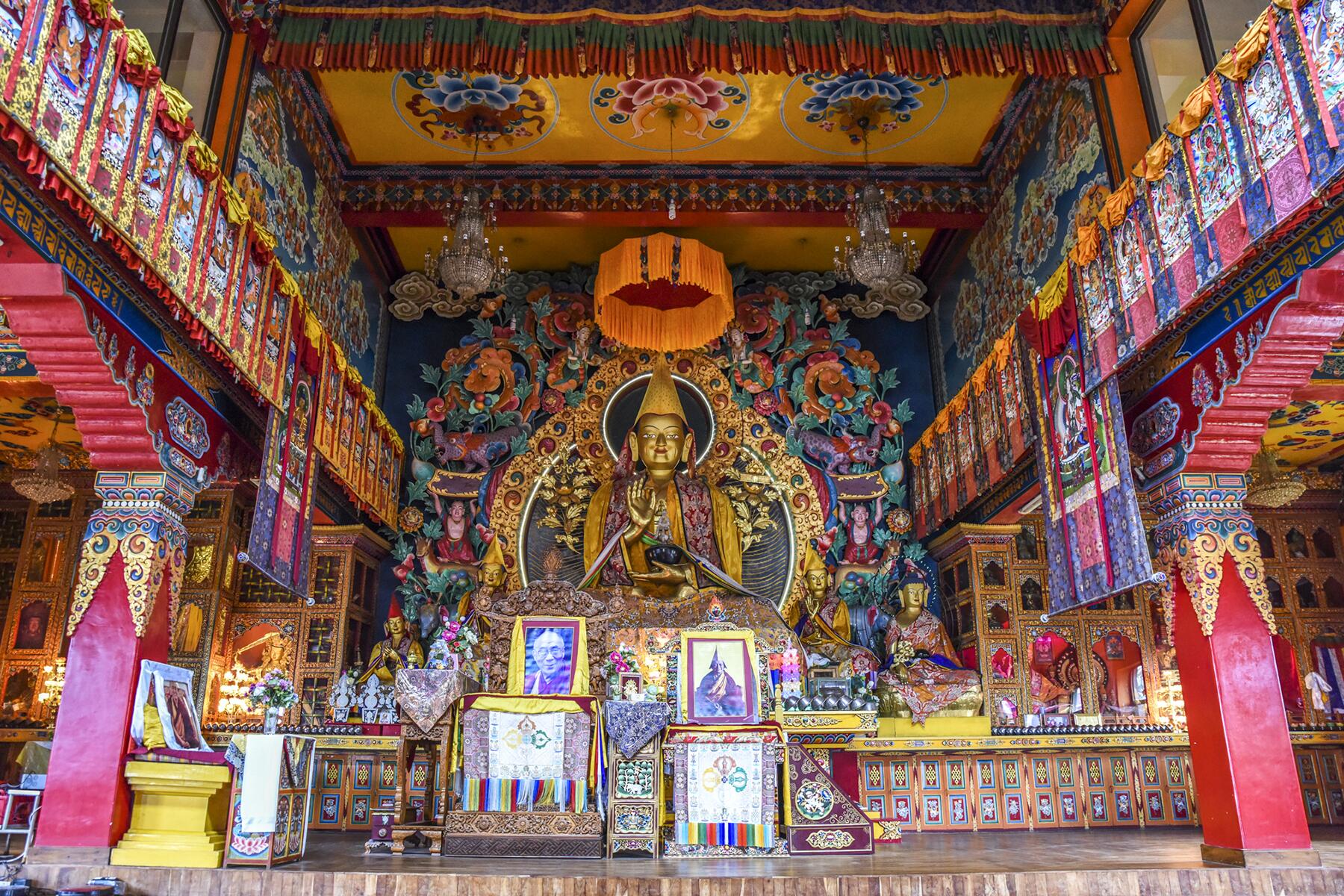 Harvesters of "white gold" are trying to survive a global meltdown.

Since the late 19th century, when it was under French colonial rule, salt farming has been a thriving business in south-central Vietnam. The mineral was called “white gold,” an oblique reference to the relative prosperity of the salt farmers, many of whom shifted over from fishing to salt harvesting.

Around 25 miles to the north of Nha Trang, the popular beach town in central Vietnam, Hon Khoi in Ninh Hoa Commune, is home to the dan diem (salt makers) community, whose entire lives are spent harvesting salt.

The salt is produced in the vast swathes of salt pans of the Hon Khoi peninsula, a few miles from the beautiful Doc Let beach. Spanning an area of almost 1,000 acres, Hon Khoi produces a third of Vietnam’s salt. The 30,000 tons of annual production is used for domestic consumption as well as exported to Japan.

However, in recent years salt harvesting in Hon Khoi has been deeply affected by unpredictable weather patterns. The dry months, from January to June, have been the traditional salt harvesting season. The intense tropical sun evaporates seawater from the shallow pools, leaving the saline crystals to be raked out by the farmers. But early arrivals of the wet season and shifting rain patterns have upended work over the last few years, impacting both production volume and quality.

Last year began on a favorable note, with 30% more production than last year. But the pandemic has led to a sharp dip in salt price (from $0.50 to $0.26 USD per kilogram), primarily because the demand for salt in Vietnam’s fishing industry, which is the traditional buyer of domestic salt for fish sauce and seafood products, has hit an all-time low. 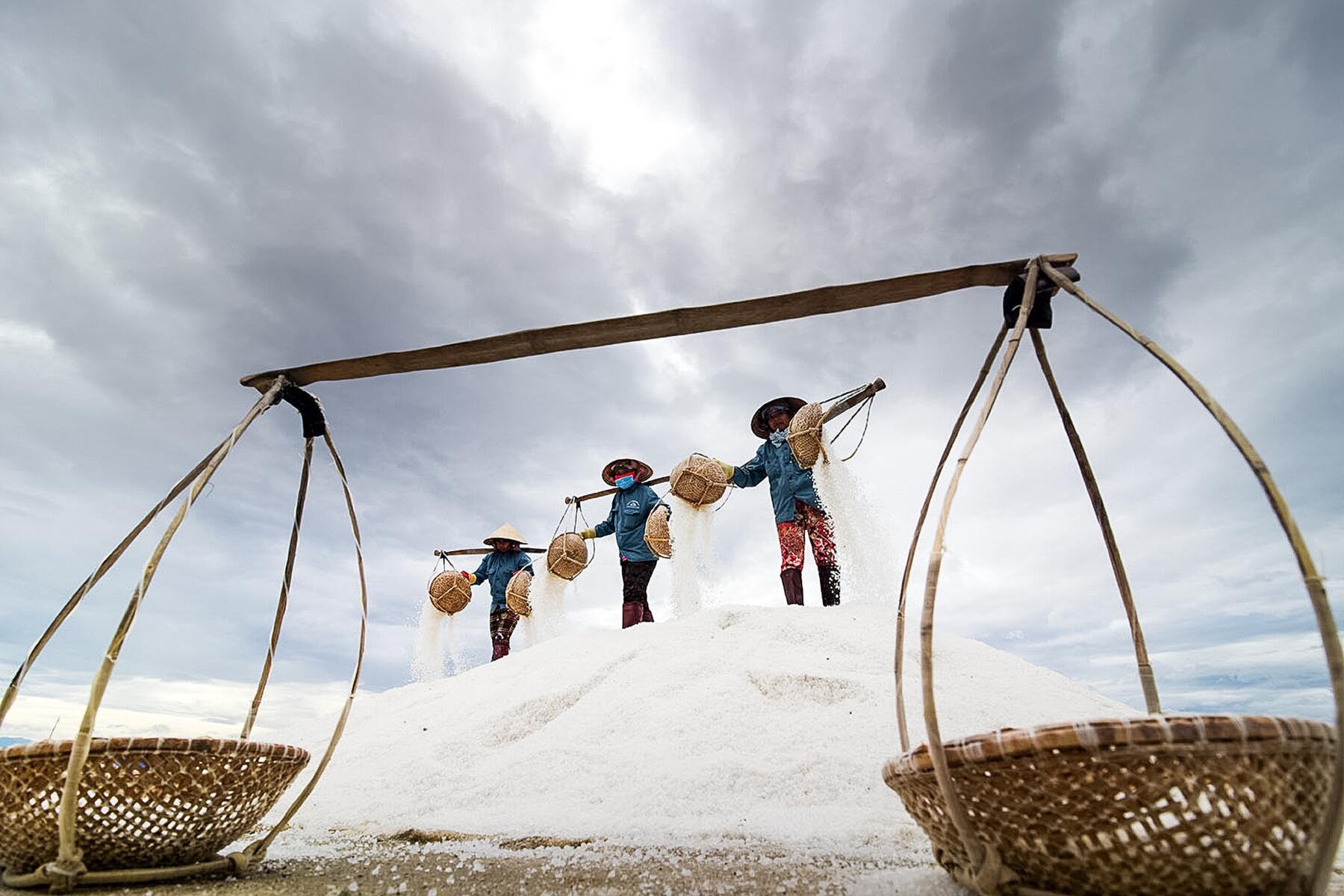 Salt farms of Hon Khoi are run by small, family-run cooperatives, where both men and women are paid equally–a rarity in labor-intensive industries of South East Asia. From January to June, the dan diem community work in the salt fields from dawn to dusk in seven to eight-hour shifts. Hon Khoi produces a third of Vietnam’s salt. With a coastline that runs along the length of the country, Vietnam averages about 7,40,000 tons of handmade salt every year. 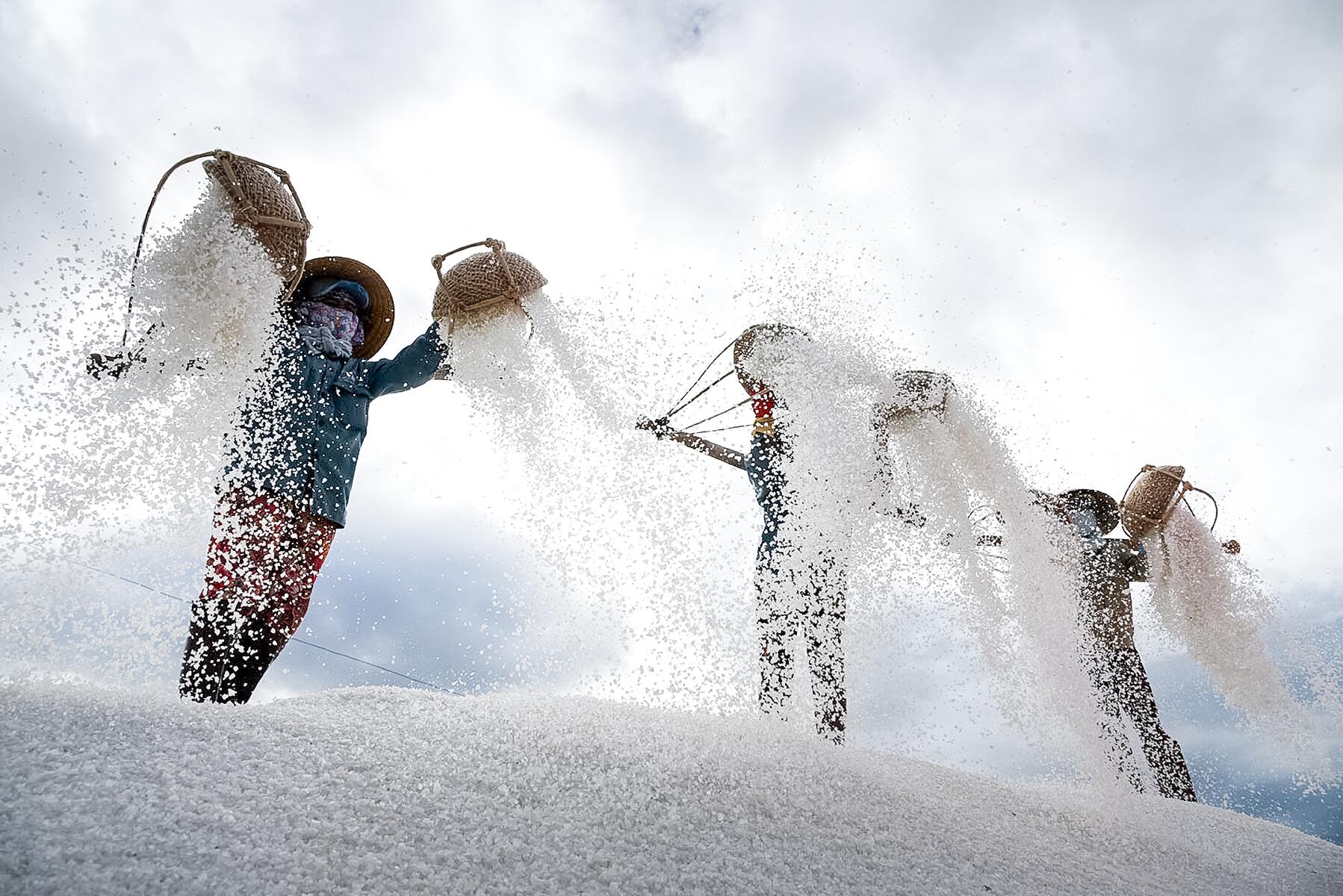 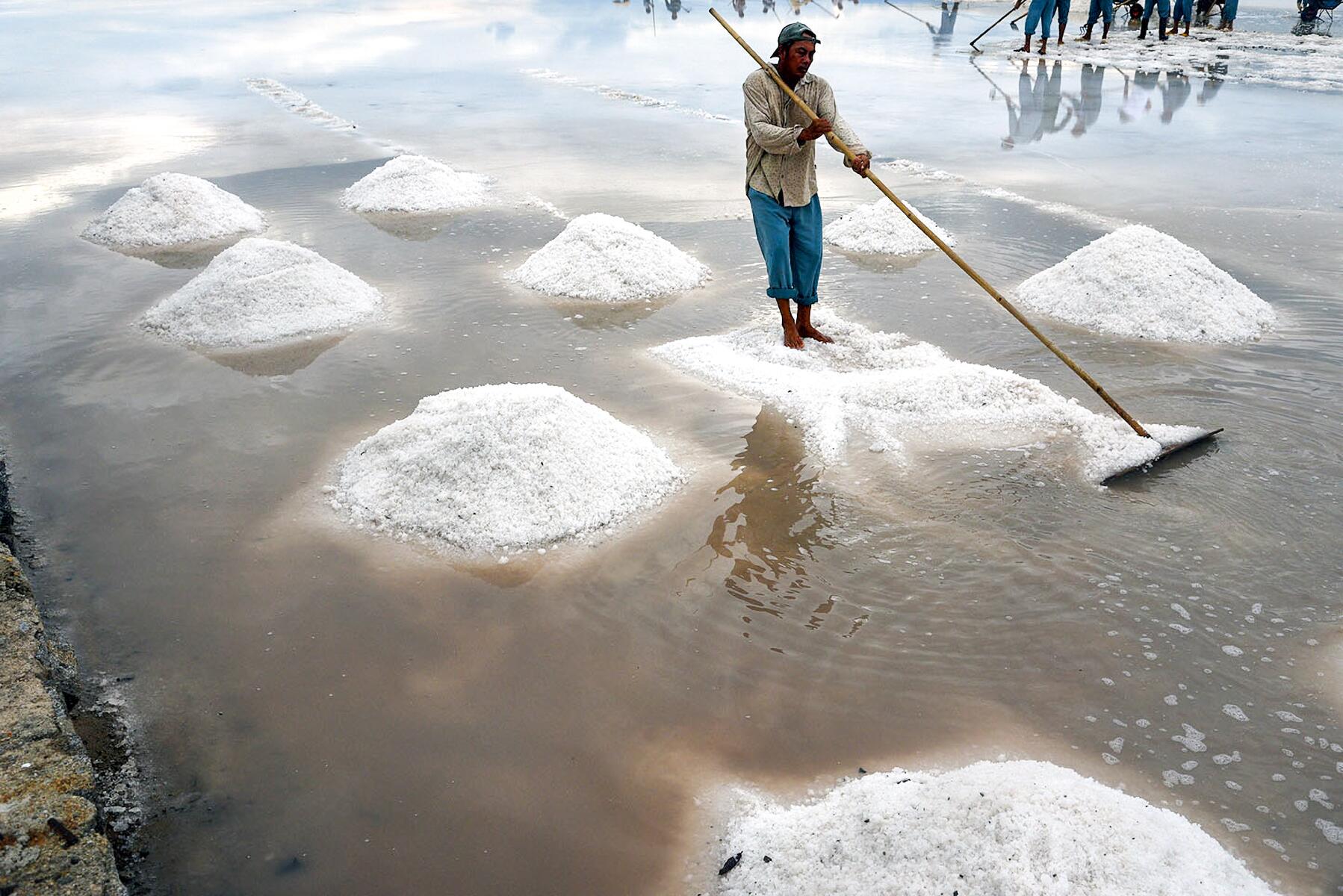 Women sport conical hats and cover their mouth with handkerchiefs as protective gear from the scorching tropical sun. Most of the ladies use hand gloves and rubber boots to avoid the corrosive effect of the saline crystals on their skin. They deftly carry two bamboo baskets each with 22 pounds of salt slung over their shoulders and unload them on the huge salt mounds at the side of the salt fields. Men rake in the salt crystals with their wide-mouthed shovels, heaping them in small mounds from where the women will take them in baskets or wheelbarrows. Most of the male workers work barefoot because they say it is more comfortable that way in the hot and humid weather. 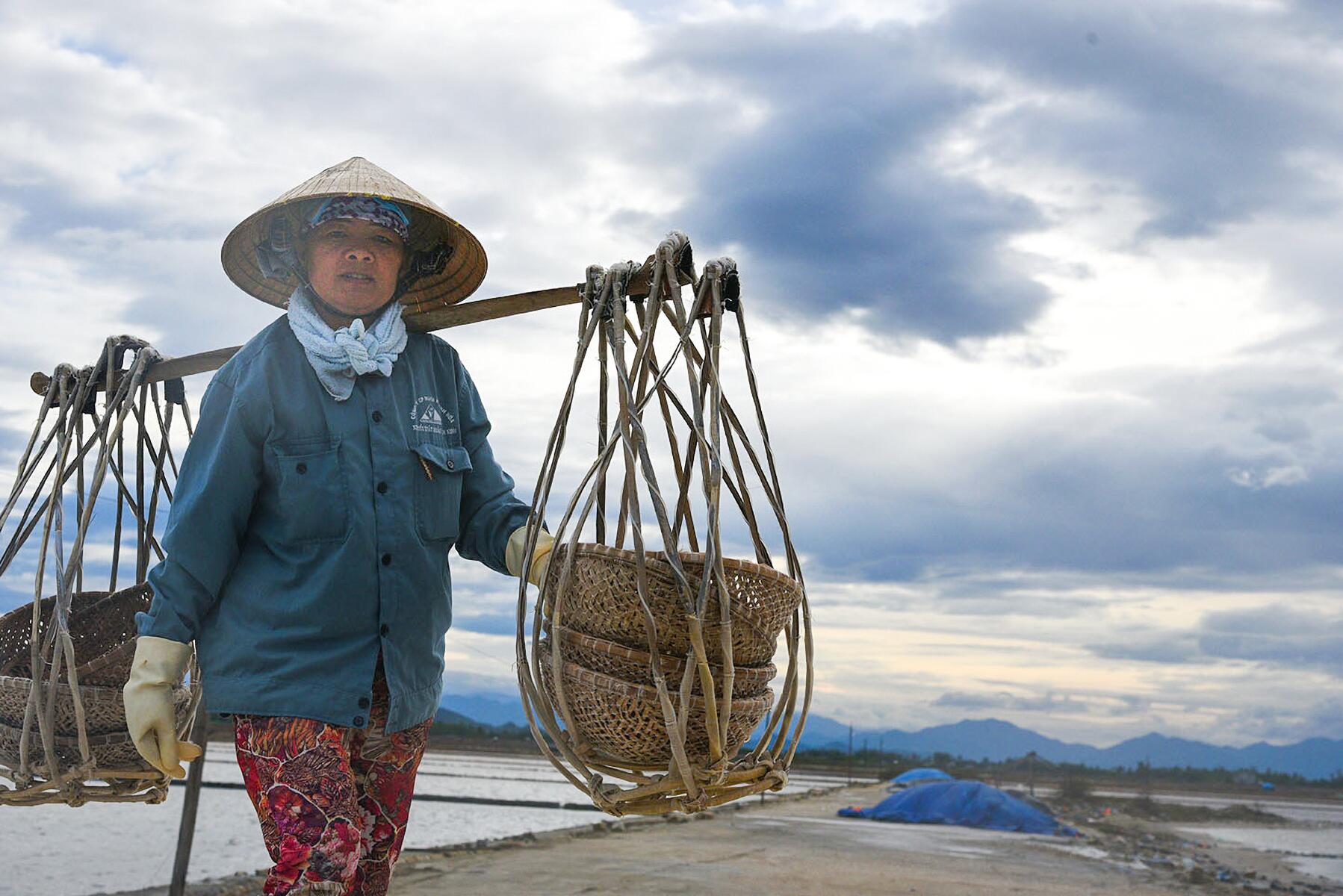 Hguyi Nhu Nhang has been working at the Hon Khoi salt fields for more than two decades. She hails from a family that’s been engaged in salt harvesting for generations in Hon Khoi, where the salt trade was started by the French colonialists in the late 19th century. 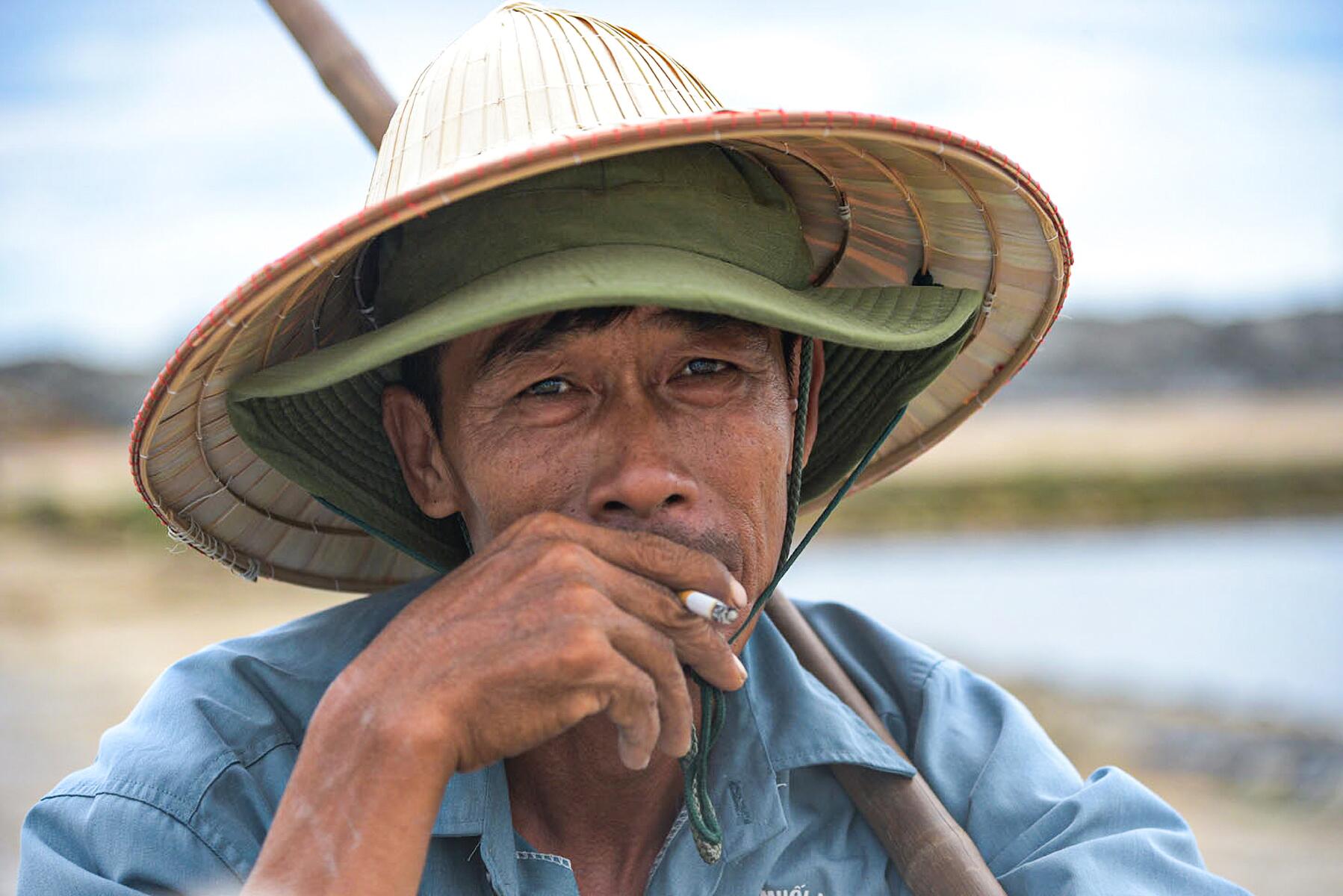 Nguyen Minh, 37, has labored in the salt fields since his teens. He says that salt farming was a profitable profession when he had started, but the earnings of a salt farmer have sharply decreased in recent years. The payout is directly related to production volume and shifting weather patterns due to climate change has severely hampered salt production in Vietnam. 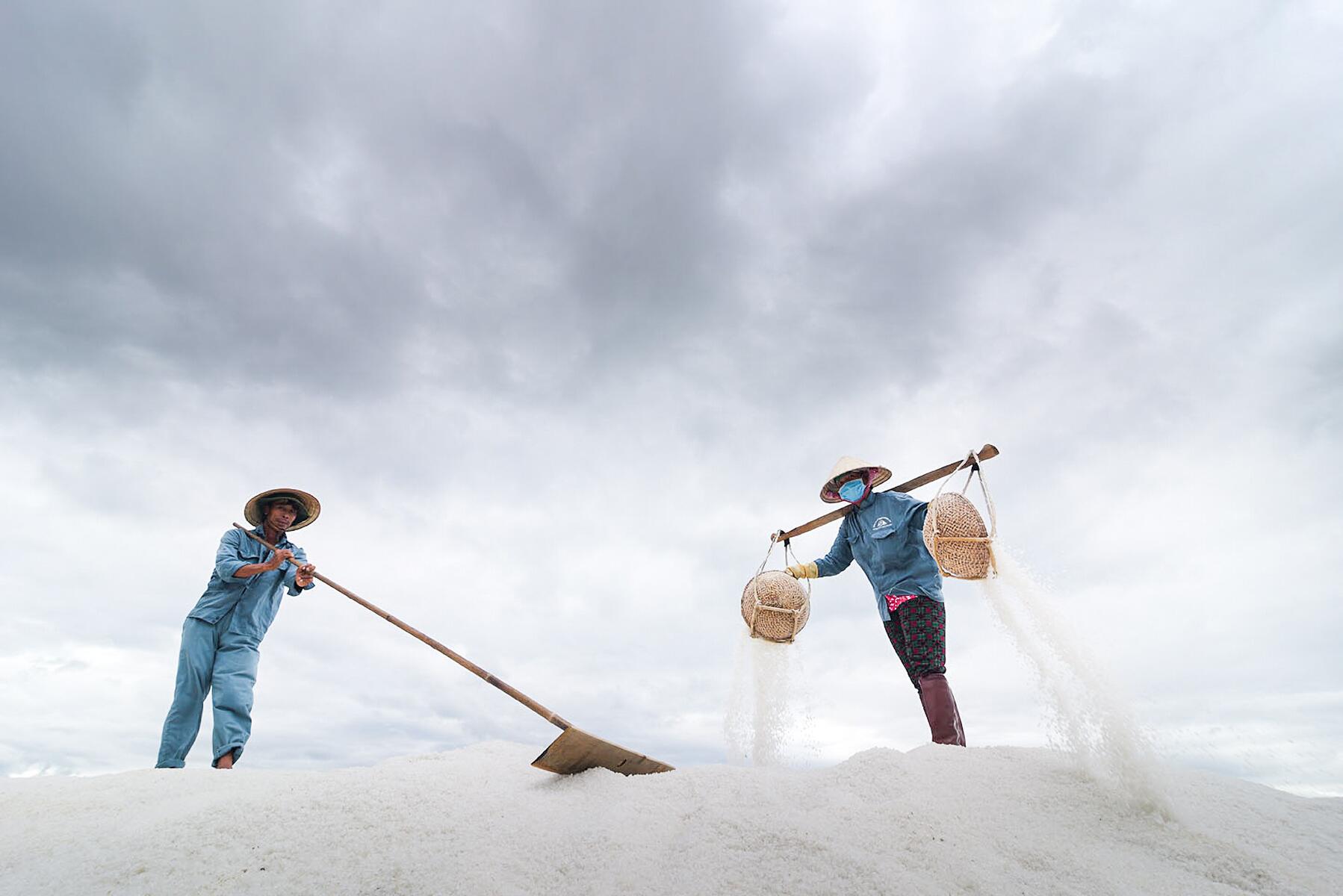 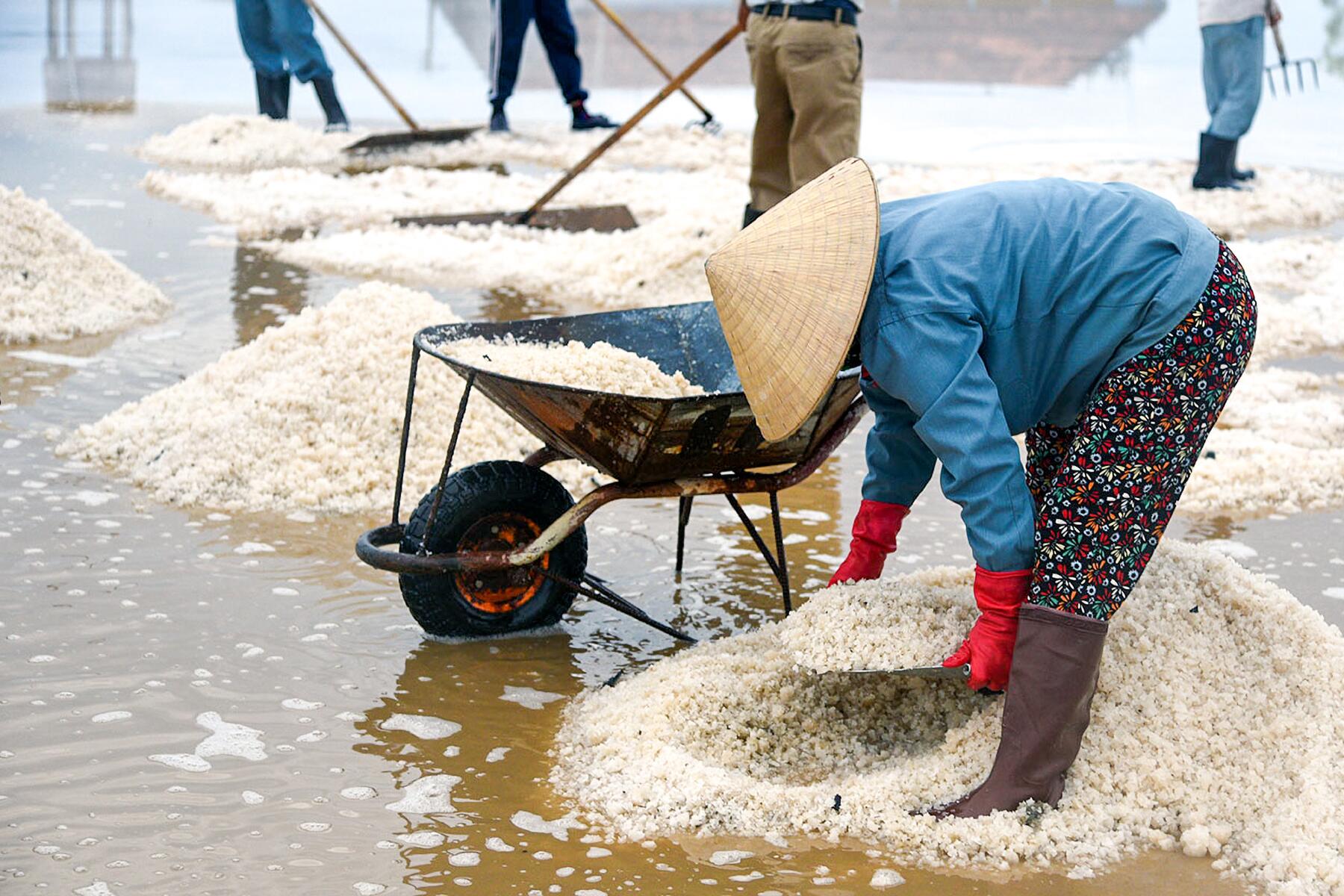 Hon Khoi salt fields have become Instagram hotspots in recent years. The vast swathes of salt pans look extremely photogenic with the workers fanned out across the expansive white canvas resembling an icefield. However, this is intensely hard work with unstable income. The farmers have to take up other means of livelihood, like paddy or shrimp farming in the non-harvest season, to sustain their families.

The Vietnamese government laid out a 15-year plan in 2014 to introduce new technologies to reduce overdependence on the weather for yielding a good crop; and also to support farmers affected by shifting weather patterns. But as of last year, salt harvesting is still following the traditional method of the natural evaporation of seawater in the salt fields. 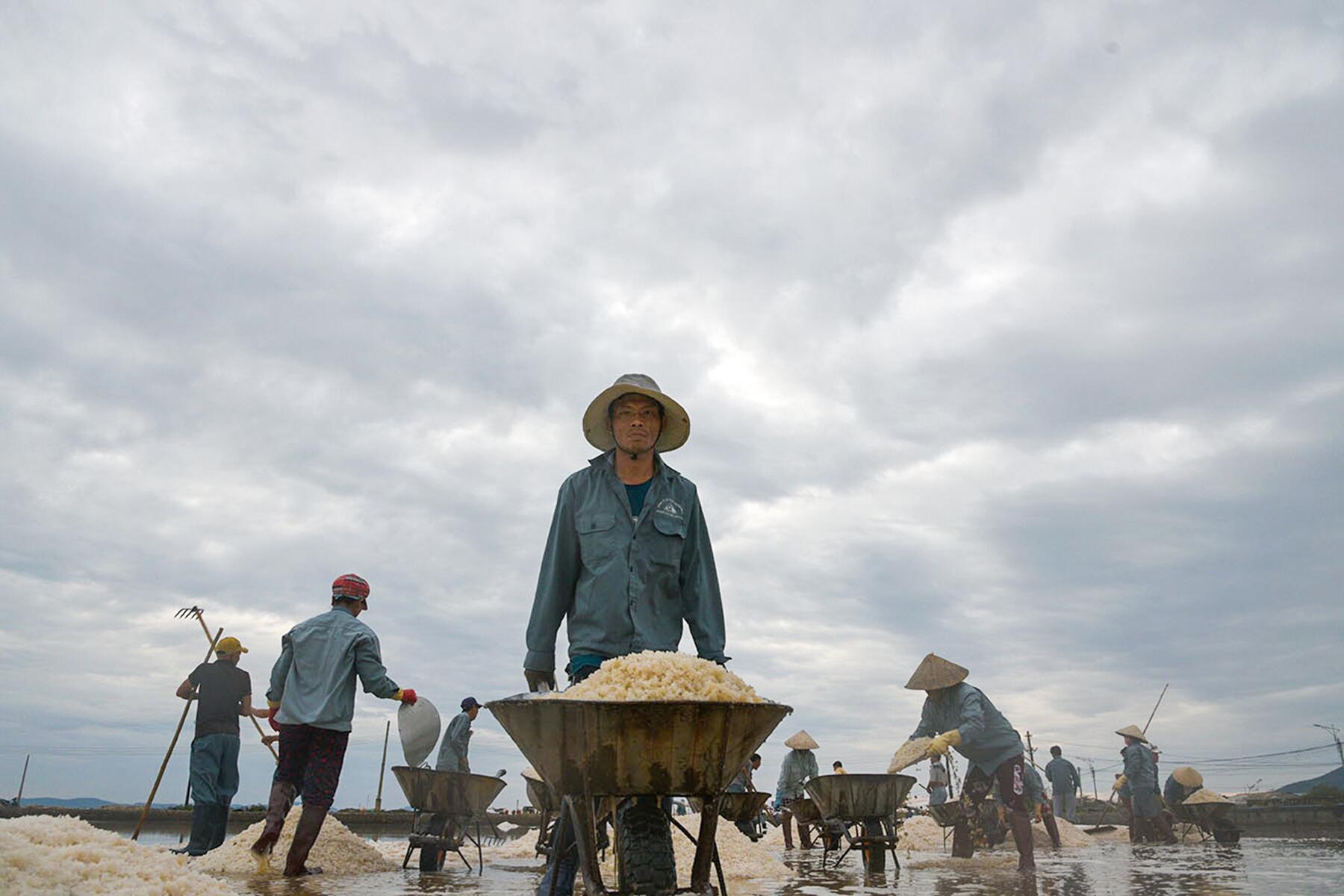 The average earnings of a salt farmer range between 100,000 VND (USD $4.31) to 150,000 (USD $6.47) VND per day, just enough to procure the basic necessities. But the air of cheeriness and camaraderie in the salt fields is as fascinating as the stunning views of the expansive white fields.

The farmers sell their harvest to local traders who pass it up the value chain for domestic consumption or in the fish factories across Vietnam, which is the prime market for handmade Vietnamese salt. 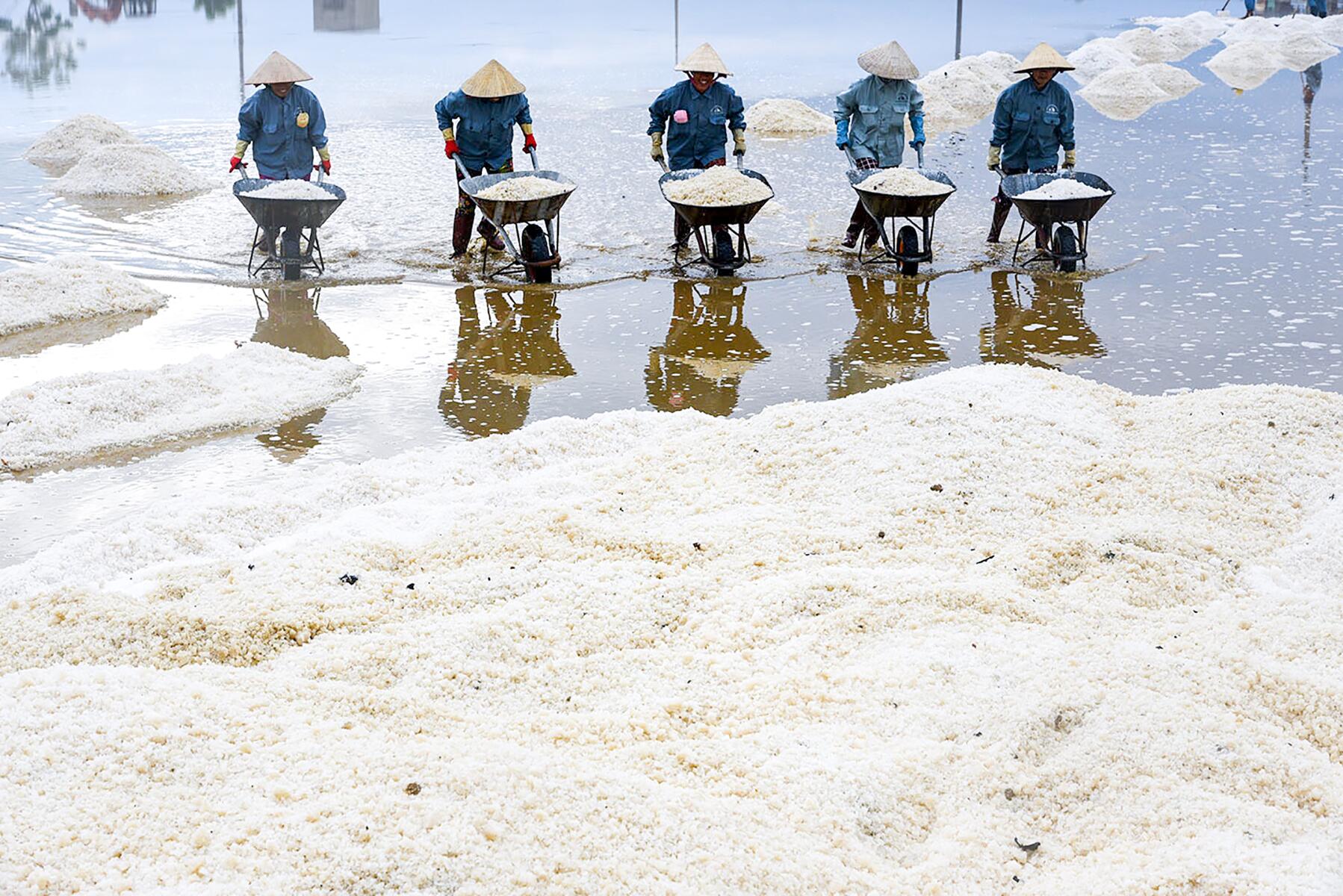 The 2020 season started on a favorable note, with 30% more production than last year. But the COVID-19 pandemic has led to a sharp dip in salt price (from $0.50 to $0.26 USD per kilogram), primarily because Vietnam’s fishing industry–the traditional buyer of domestic salt for fish sauce and seafood products–has been severely disrupted due to the pandemic. 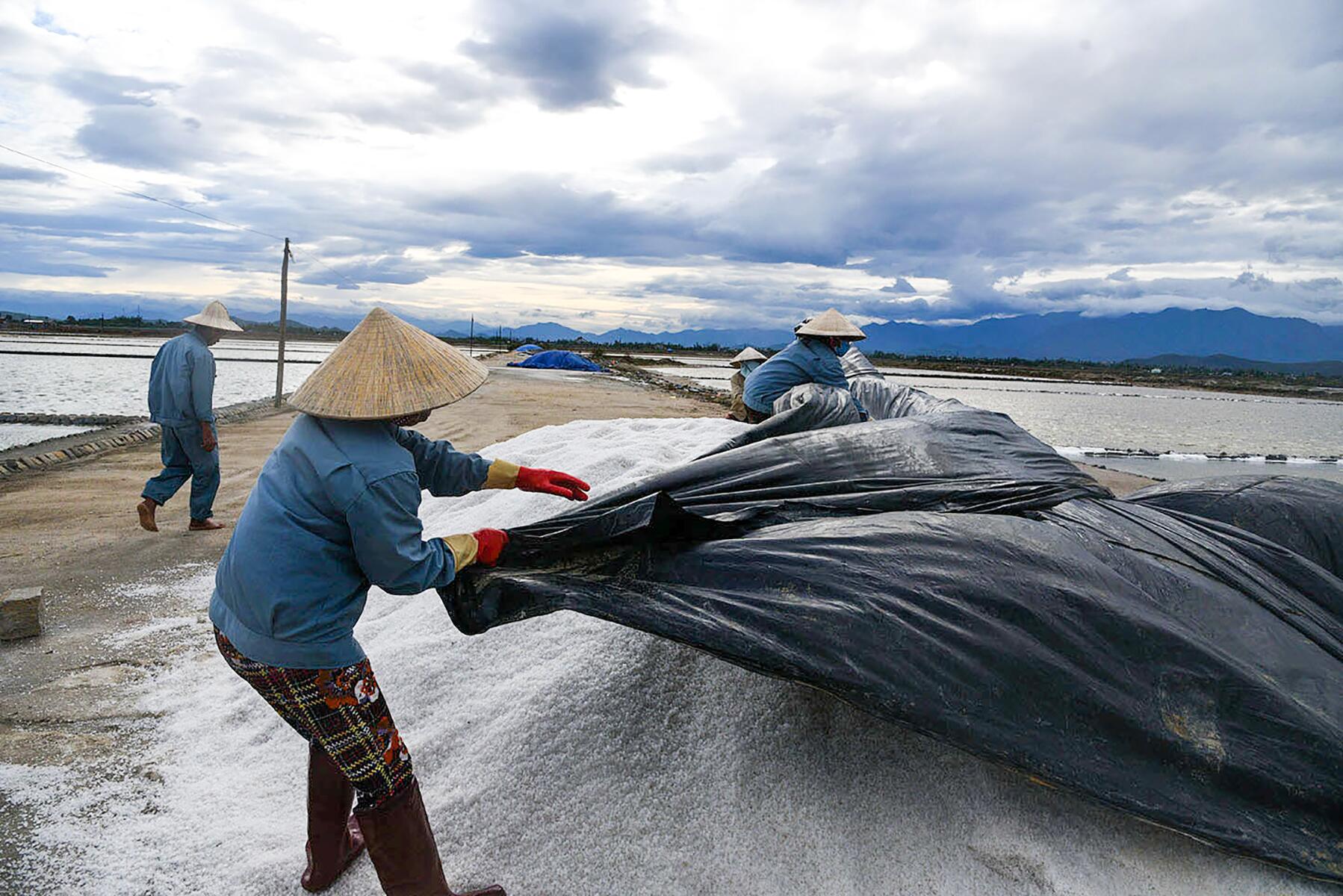 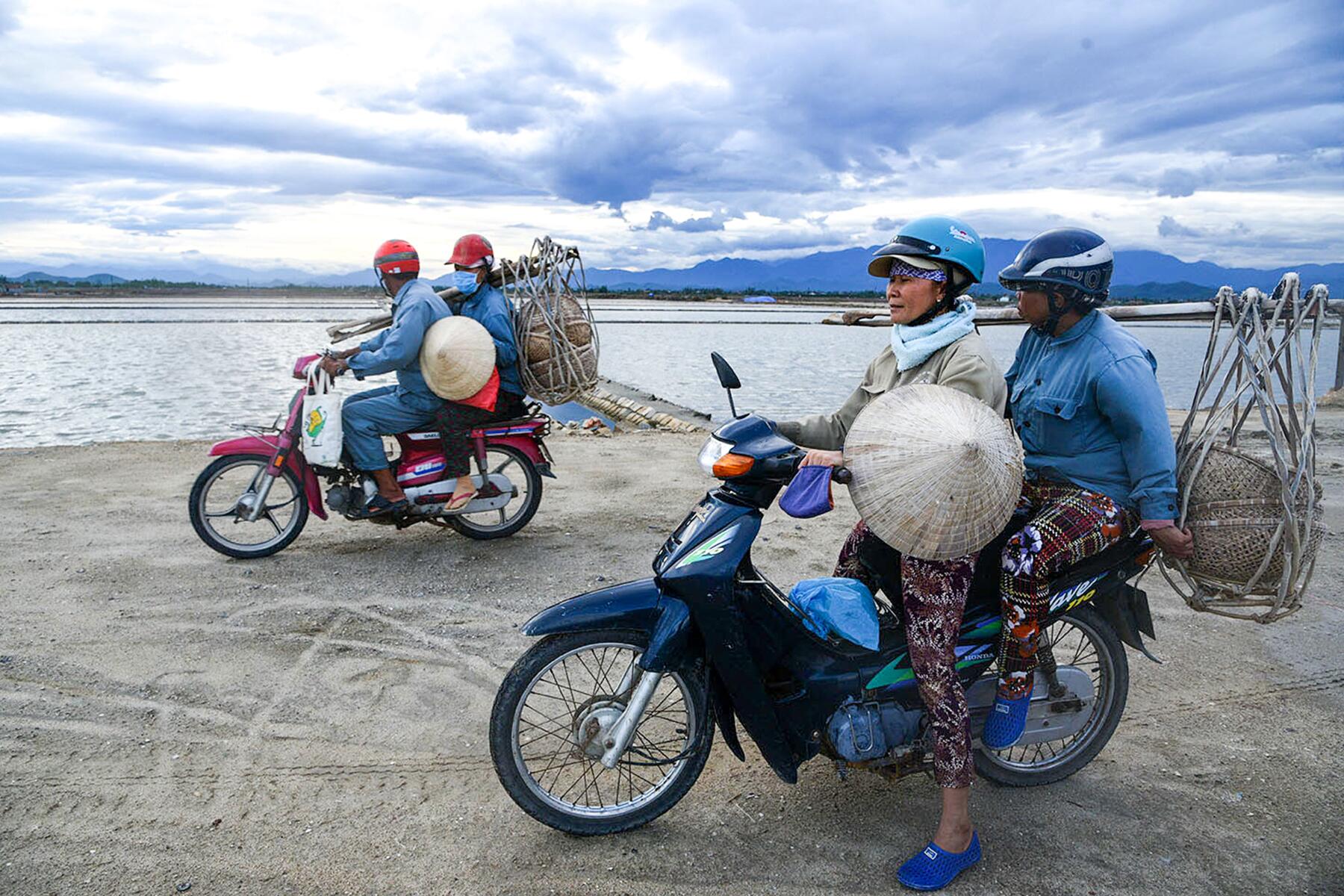 Under a darkening sky, two salt farmers are hastily covering a salt mound to protect it from rain. Frequent rains in the high harvesting season from March to June, which had always been the dry season in Vietnam,  have upended work in an industry that depends on sunny, dry days for maximum production. After putting polythene covers over the salt mounds, the farmers are leaving the fields early in the afternoon because of the heavy clouds and the possibility of a heavy downpour.