China’s fascination with Western architecture and culture has led to the creation of many unusual neighborhoods that mimic Europe.

The Eiffel Tower is surrounded by a dirty parking lot, the London Tower Bridge strangely has two extra towers and a Dutch windmill farm sits near a giant elevated highway. Oh, and the Champs-Élysées doesn’t have luxury boutiques and bistros, but instead laundromats, convenience stores, and noodle soup restaurants.

China famously likes to replicate things created in the West. Now it’s elevated that concept by recreating European cities as bizarre housing estates, some of which verge on being ghost towns. Fascinated and perplexed by this trend, I decided to visit three such odd neighborhoods on a recent trip to China. I explored a suburb modeled after Paris in the city of Hangzhou, a faux Dutch Village in Suzhou, and a London replica neighborhood in Shanghai. 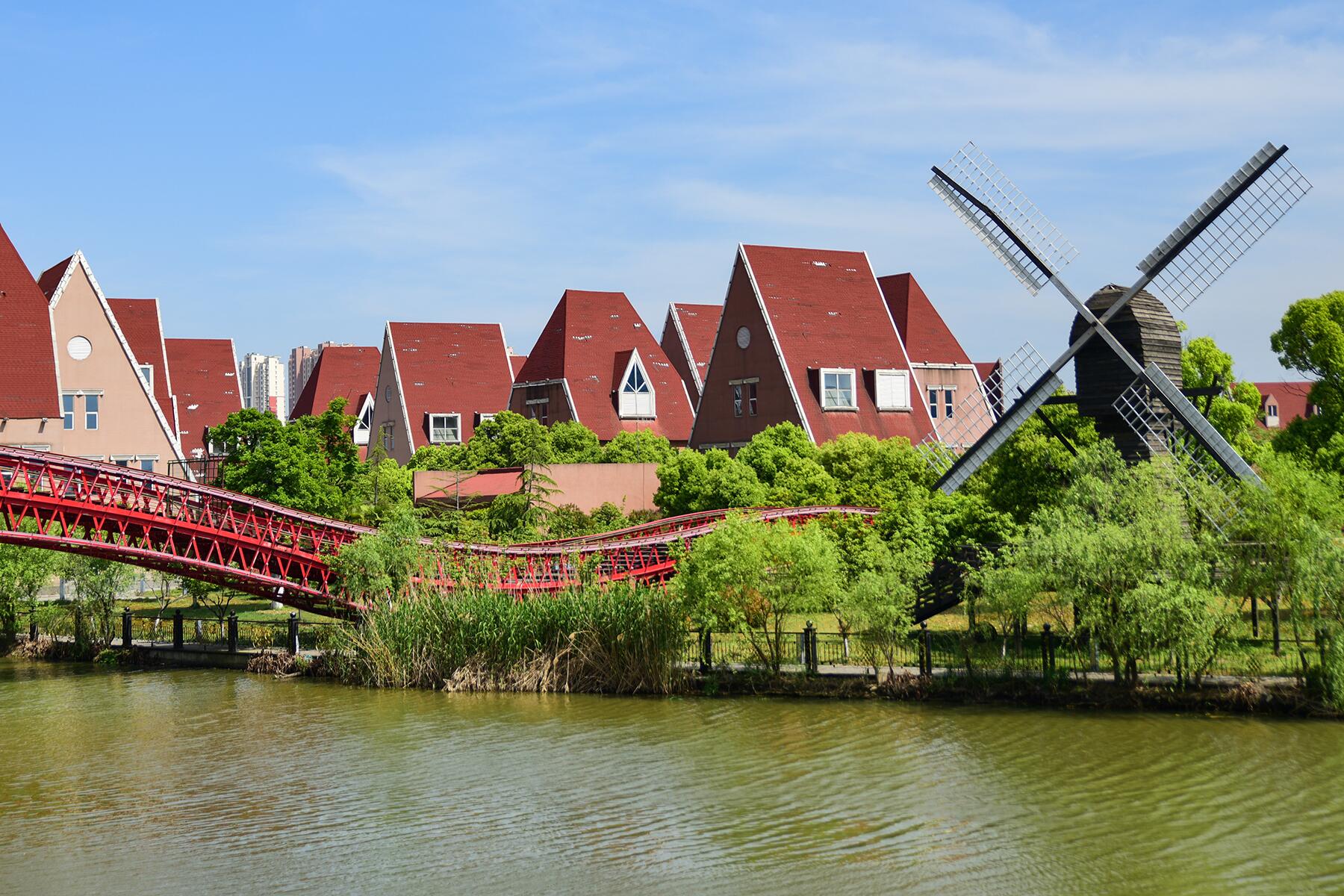 Each one was stranger than the next. My journey began in the latter estate, called Thames Town, at the entrance to which I found a middle-aged security guard dressed to vaguely resemble a British Queen’s Guard. Unlike those English officers, who are trained soldiers that stand silently outside royal residences, this man was giggling at a comedy video on his phone when I took him by surprise.

Few Western tourists make the effort to visit Thames Town, which is one hour by taxi southwest of central Shanghai. If that comical first impression dented the illusion of being in Britain, what came next demolished it. There is no British custom I appreciate more than high tea. I’ve savored this afternoon treat of assorted sandwiches, pastries, cakes, and brewed drinks all across the world, from Perth to Paris, Bangkok to Bangalore, and of course in its birthplace London.

Never had I seen high tea served with pomegranate pizza, fried chicken, and spaghetti bolognese. They were among some of the unexpected dishes served by Alice in Afternoon Tea, a small restaurant in Thames Town themed on the English fantasy tale, Alice’s Adventures in Wonderland. For once, I decided to forego high tea. Instead, I built up an appetite by wandering the streets of Thames Town, which had names like Victoria and Leeds. 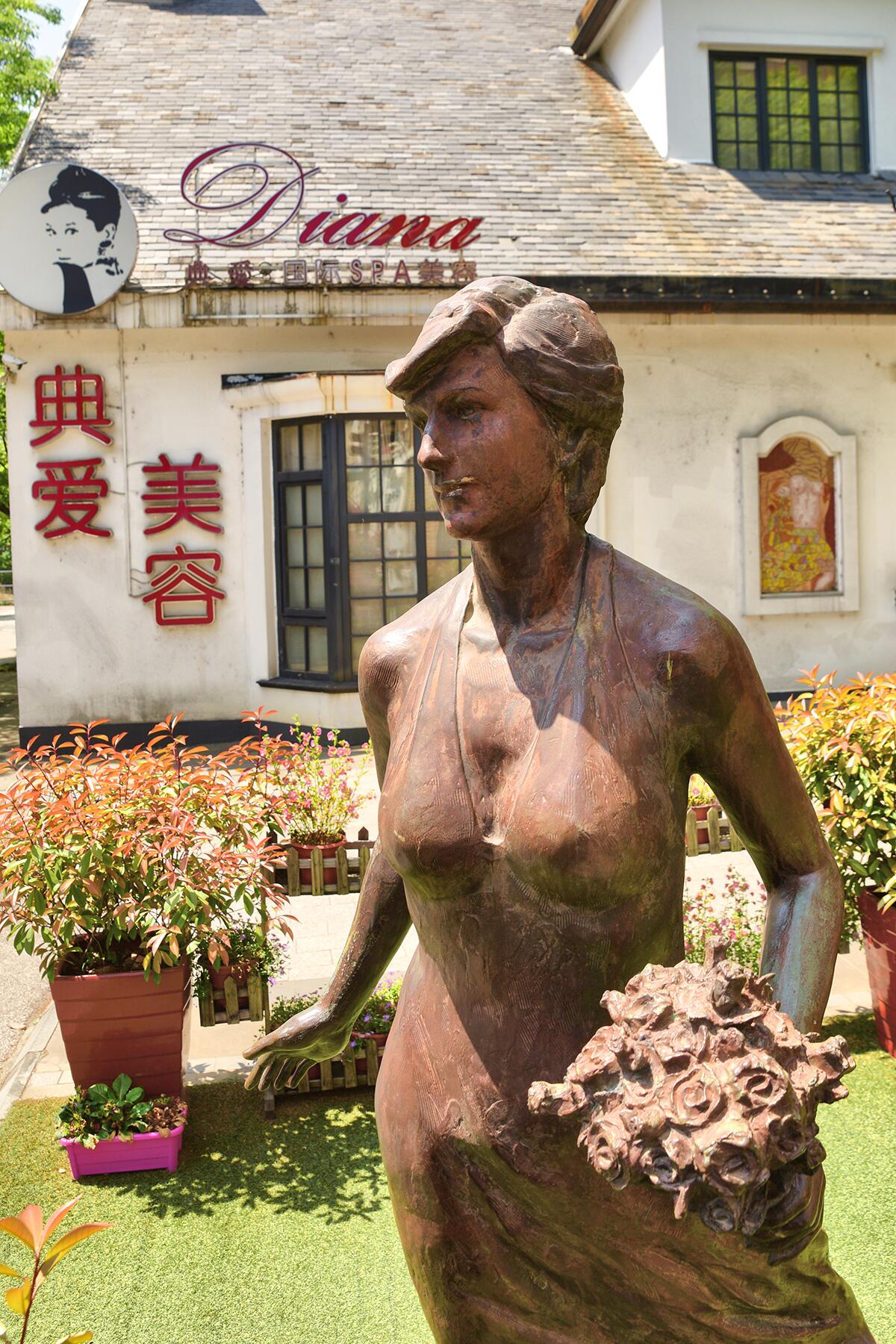 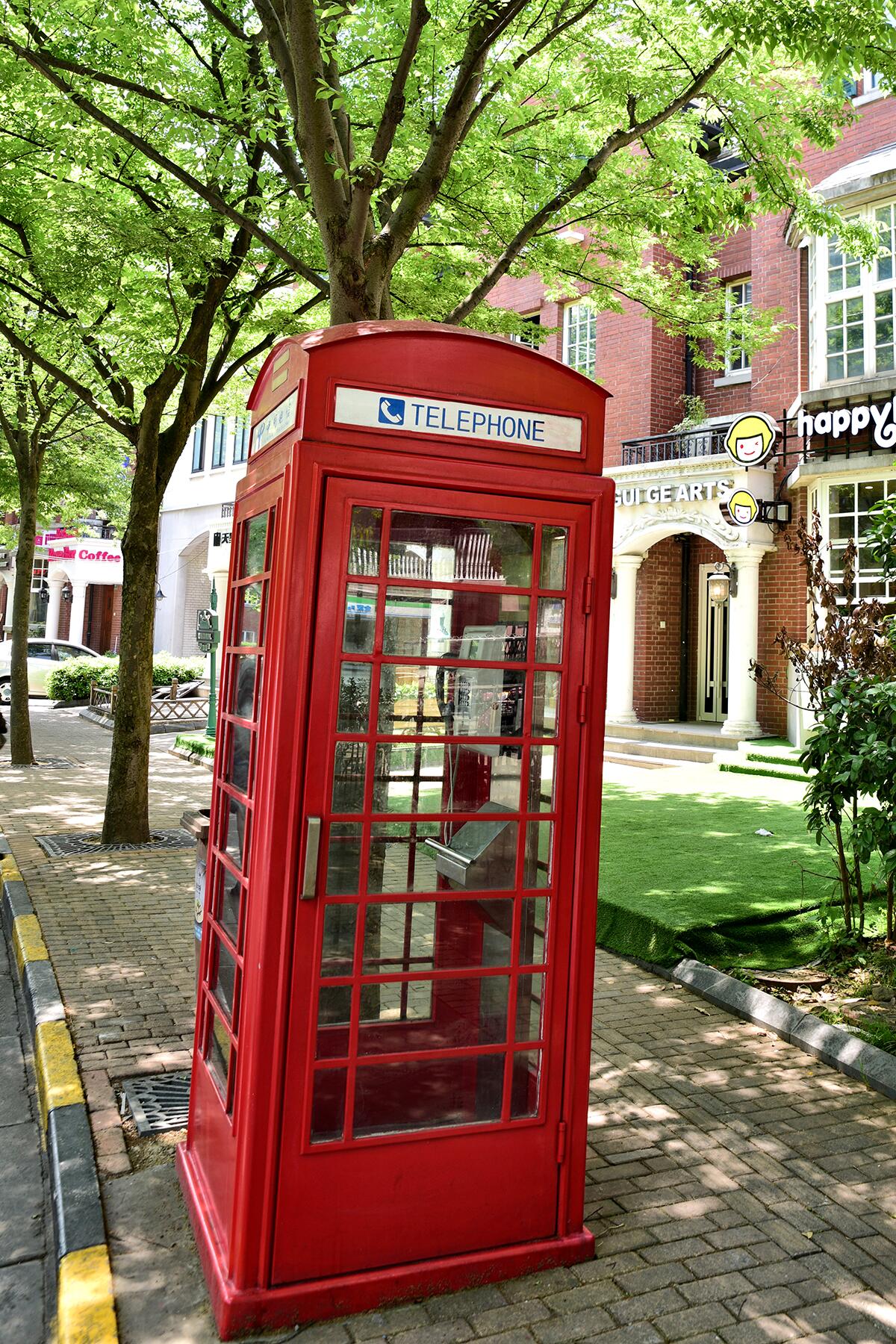 Soon enough I bumped into British royalty. A day-tripper was posing for a photo with a life-size statue of the late Princess Diana. Providing a kitschy backdrop for photos appears to be a key function of these European-themed neighborhoods. If not for the visitors who come seeking quirky images to post on social media, the businesses in these suburbs would surely perish. Because I saw very few people who appeared to actually live in these estates.

Many financial experts say China’s maintained its swift economic growth simply by building, building, building. An endless production line of skyscrapers, highways, shopping centers, and housing estates. Even if they’re not really needed, they get erected regardless, all in the name of job creation.

That was the only explanation that helped me fathom the existence of Thames Town and the Dutch village in Suzhou, which was new and in good condition, yet appeared to be abandoned. I couldn’t investigate this neighborhood, decorated by a Dutch windmill and A-frame homes similar to those in the Netherlands, due to a locked gate blocking the bridge that spans the river which surrounds it. 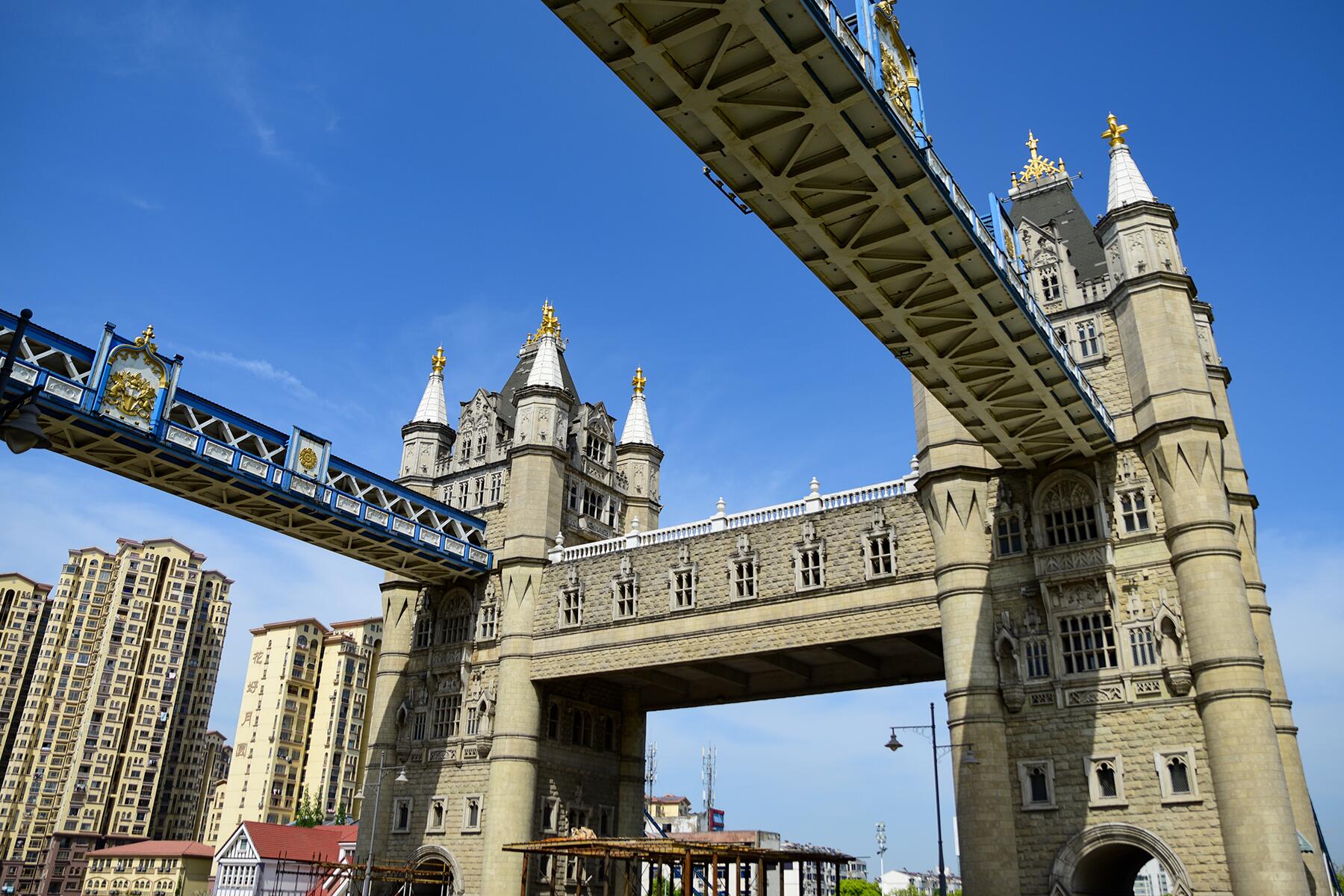 So I stood next to this waterway, waited, and watched. When I saw no sign of human activity I moved on to a nearby bridge that looked familiar yet distorted. This large structure clearly was intended to mimic London’s iconic Tower Bridge, one of England’s top tourist attractions. It had the same Neo-Gothic design, with boxy towers topped by gilded spires, and embellished by pointed arches and royal crests.

Perhaps the designer should have studied photos of that London bridge more closely, however. Because the Suzhou version has four towers, instead of two. That error amused me as much as the mini-Paris I found in the northern outskirts of Hangzhou.

While I adore this historic Chinese city, particularly its majestic West Lake and beautiful tea plantations, the housing estate of Tianducheng was downright peculiar. My taxi driver, who was patently confused by my request to visit this suburb, dropped me alongside a scaled-down version of the Eiffel Tower. 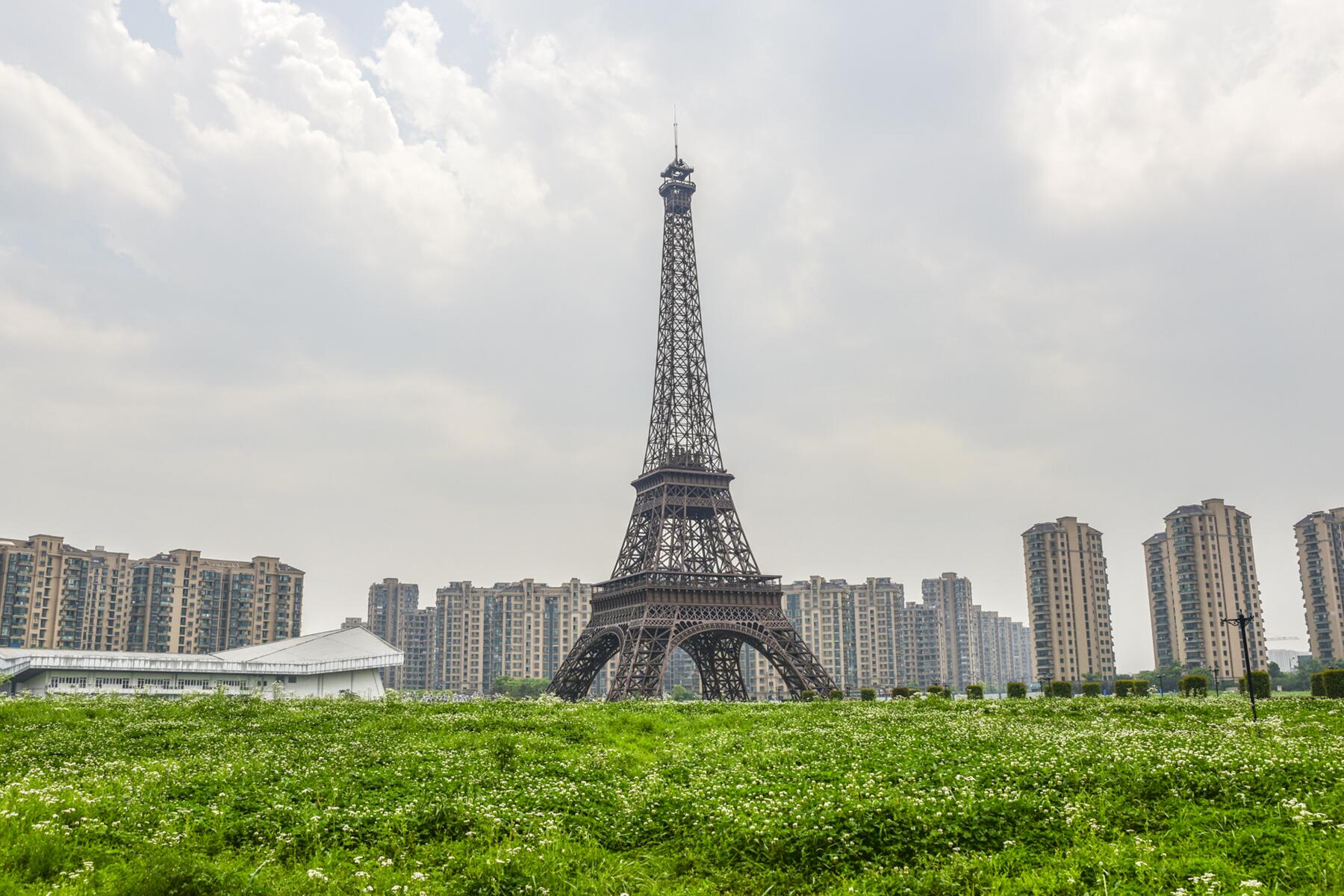 The original version in Paris is a universally-admired structure flanked by splendidly landscaped gardens. Here, in Tianducheng, the replica tower is kept company by a grubby parking lot, weed-filled lawns, and a cluster of monolithic apartment blocks. Not quite so romantic.

Directly north of the fake Eiffel is a knock-off of the Champs-Élysées, the famously-grand Parisian boulevard lined by some of the world’s most expensive boutiques and restaurants. I could never afford to dine or shop on that renowned strip. Whereas the prices were very reasonable at Tianducheng’s dumpling restaurants and souvenir shops.

In the right light, from the right angle, without using a critical eye, parts of Tianducheng almost looked like Paris. It’s a weird place. So too, are Thames Town, Suzhou’s Dutch ghost village, and the deformed London Tower Bridge. Yet for travelers like I, who appreciate the absurd and seek out the nonsensical, China’s duplicate European villages are a delight.