Huan Hsu is the author of The Porcelain Thief, a memoir about how he traveled to China and Taiwan to search for valuables his family had hidden from the Japanese in 1938. While there, he learns about his family history as well as the history of Jingdezhen's porcelain. 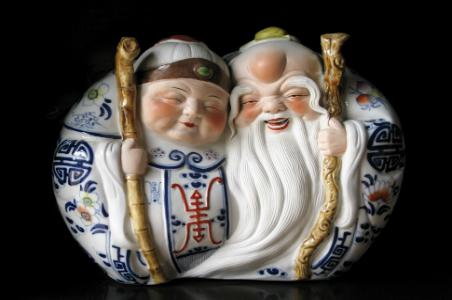 On a list of China’s most famous products, porcelain would probably be near the top. There's a reason your finest plates are called “china,” after all. Yet Jingdezhen, the city that for centuries produced most of the country’s porcelain, seldom appears on travel itineraries, even for Chinese travelers. That’s a pity, as the former cidu (“porcelain capital”) of the world, located about 340 miles southwest of Shanghai in Jiangxi province, remains one of the country’s most singular places. For nearly a thousand years, Jingdezhen hummed with artisans, craftsmen, and merchants, all manufacturing imperial wares for the Song, Yuan, Ming, and Qing dynasties and exporting porcelain across the globe, a unique strand of continuity that speaks to its centrality in the Chinese culture it helped define. Though far removed from those glory days, many traces of Jingdezhen’s ancient past remain—workshops, kiln sites, and, of course, plenty of ceramics, old and new—and the city is as dynamic as ever as it tries to strike a balance between modernity and tradition. And all the while, the kilns keep firing, giving visitors the rare opportunity to witness history in the making. Here are five reasons why no trip to the Middle Kingdom is complete without a stop in Jingdezhen.

Let’s face it: China’s second- and third-tier cities can be overwhelming and difficult to navigate. Jingdezhen’s best orientation point is the former national Sculpture Factory, one of ten state factories, each producing a different type of ware, that went fallow after the economic reforms of the 1980s. Anchored by The Pottery Workshop, a creative initiative established by a Hong Kong–born, British–educated ceramicist, the Sculpture Factory has become ground zero for Jingdezhen’s creative resurgence, packed with workshops and galleries that draw artists and collectors alike. Hosting a rotating cast of resident artists, The Pottery Workshop also serves the best coffee shop in town (with a nicely curated selection of tableware for sale), a weekend art market, and weekly public lectures. Near the front entrance of the Sculpture Factory is a quaint, affordable hostel popular with visitors. 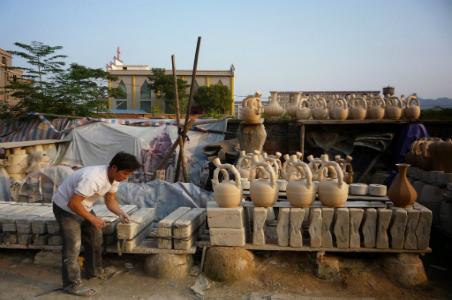 In addition to the Pottery Workshop’s Saturday morning “creative market,” Jingdezhen offers plenty of other destinations for porcelain of all shapes, sizes, and ages. Vendors at the Monday morning antiques market on Shuguang Road hawk antique ceramics, wood furniture, and other artifacts, but buyers are advised to make their decisions according to visible beauty rather than stated age. Of most interest (and authenticity) is the vast selection of porcelain shards: pale green or blue Song-era monochromes; blue and white pieces from the Ming and Qing dynasties, painted with trees, flowers, animals, figures, or domestic scenes; export ware designed with Chinese takes on Western iconography; and occasionally even imperial pieces, originally destined for the Forbidden City. Haggling is common here. For modern ceramics, the streets across from the Jingdezhen Ceramics Institute on Taoyang Road have exploded with student- and artist-run shops and galleries—but note that haggling here is frowned upon.

Locals like to say that Jingdezhen’s finest works of art are in overseas museums and private collections, which explains why the city’s official museums and cultural sites—such as the Ancient Kiln Folk Customs Museum, Official Kiln Museum, Museum of Porcelain, and Hutian Tao Sawai Ruins—can be hit or miss. And given the value of authentic imperial porcelains and the prevalence of counterfeiting, it’s hard to know if what’s on display is the real deal. But Longzhu Pavilion takes a slightly different tack. Rebuilt many times over the centuries, the five-story pavilion presided over the royal kilns churning out wares for the Ming court, which means it sits atop acres of imperial shards. Most of the ceramics displayed in the pavilion are reconstructed from these shards, three-dimensional jigsaw puzzles with more than 300 years of history. The top floor offers a nice panoramic view of the city and surroundings. 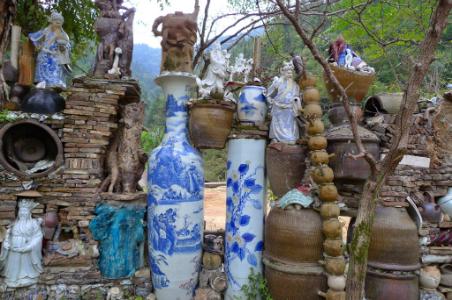 For a glimpse of what an ancient ceramics village would have looked like, take a short taxi ride up the Sanbao valley, which for centuries supplied Jingdezhen with porcelain stone. Small workshops dating to the Song dynasty still line the road, using water-powered hammer mills to crush the stone. Near the top of the road sits the Sanbao Clay Art Center, a group of farmhouses nestled between swaying bamboo groves and a burbling, crystal-cold mountain stream. Oozing with rustic charm, Sanbao’s studios and kilns produce beautiful stoneware for sale on-site and attract artists from across the globe. Rooms are available to the public and the restaurant serves some of the best cuisine in town—home-style country Chinese dishes made from fresh local ingredients. Be sure to try the plum wine.

Rising above the Donghe River about 30 miles northeast of town, Gaoling Mountain’s kaolin deposits were what fueled Jingdezhen’s boom. Now a protected site, local artisans still kick around the old mines for scraps of kaolin, which is sought after by counterfeiters. A few well-preserved Ming- and Qing-era villages dot the river, including Dongbu, accessed by a beautifully patinaed stone bridge, and home to a small museum with informative English displays. Pack a snack, as there are few options for food on or near the mountain. The closest restaurant facilities are in Yaoli, which boasts an interesting ceramics history of its own.

Huan Hsu was born in the Bay Area and raised in Salt Lake City. He is a former staff writer for the Washington City Paper in Washington, DC, and the Seattle Weekly. He is the recipient of two Society of Professional Journalists awards and has received recognition from the Casey Foundation for Meritorious Journalism. His essays and fiction have also appeared in Slate, The Guardian, The Literary Review, and Center: A Journal of the Literary Arts. He currently lives in Amsterdam and teaches creative writing at Amsterdam University College.