“We don’t have this type of hospitality in America.”

ne day before I arrived in Senegal from New York, Nathalie, my host, called me from Dakar, worried. “Do you speak enough French to take a taxi?” she asked.

I laughed. “Just enough to order a coffee.”

She mumbled to herself and then blurted, “I’ll have my friend pick you up. He is safe and cheap.”

“Should I be worried about my safety?”

“Ouais, in every country, including New York,” she snapped. “But Ahmed is safe because he gets COVID-tested often. We are not all vaccinated over here, so we all have to be safe.”

“Thanks for thinking ahead,” I said as we finished our conversation.

I returned to dumping my books, clothes, and toiletries into my suitcase, but my mind kept recalibrating to the grave days when New York City became a ghost town.

“You should stay home [in New York],” I had said to myself. “This summer will be different.”

I have been enduring most of the pandemic alone. The loneliness has stripped me down to my thinnest skin, but the racial and economic inequities that have been exacerbated by the pandemic have made me feel abandoned by a country I have called home for the past 27 years. I needed to feel welcomed, renew my faith in humanity, and connect to something bigger than myself. I knew Senegal would place all of these feelings at the center.

The next day, I put on my double masks for the 10-hour flight from JFK to Blaise Diagne airport in Senegal. As soon as I picked up my suitcase upon arrival, I rushed outside, found an open space that was six feet away from anyone, and puffed on some fresh air. Senegal was one month away from the rainy season, the plateaus ahead were scorched, but the air was perfumed, as if rain had already saturated the ground.

As I gulped for more air, a handsome man with an expansive smile stood in front of me, watching his phone, and watching me. “Leslie, it’s me,” he said as if we’ve known each other for years.

“Yes, yes,” he said, while grabbing my suitcase with one hand, and returning his mask to his face with the other.

The sky expanded as we drove away from the airport, my shoulders automatically lowered into their rightful place, my teeth became unclenched, and my mind stopped wandering about things unseen and distant.

I dusted off the language from the backroom storage of my mind. “Oui, mais je travel Africa.”

He chuckled. “It’s okay, I speak a little English.”

Ahmed and I created our own language–a little bit of French, English, and lots of hand gestures–as we drove from the airport to Dakar. We covered the important topics: family, hobbies, the global pandemic, and my reason for being in Senegal.

“I’m just curious,” I told him. “I have heard many good things.” 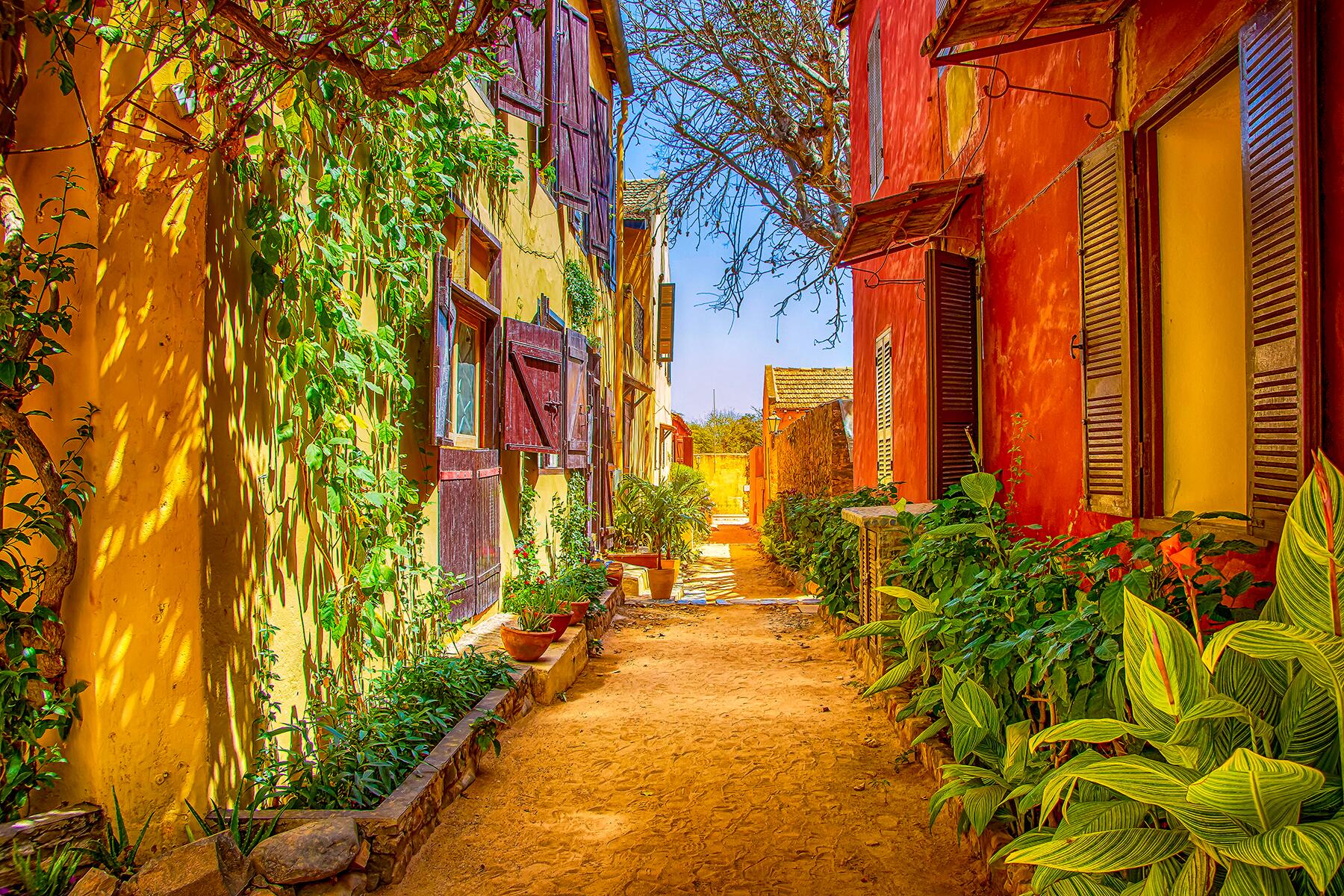 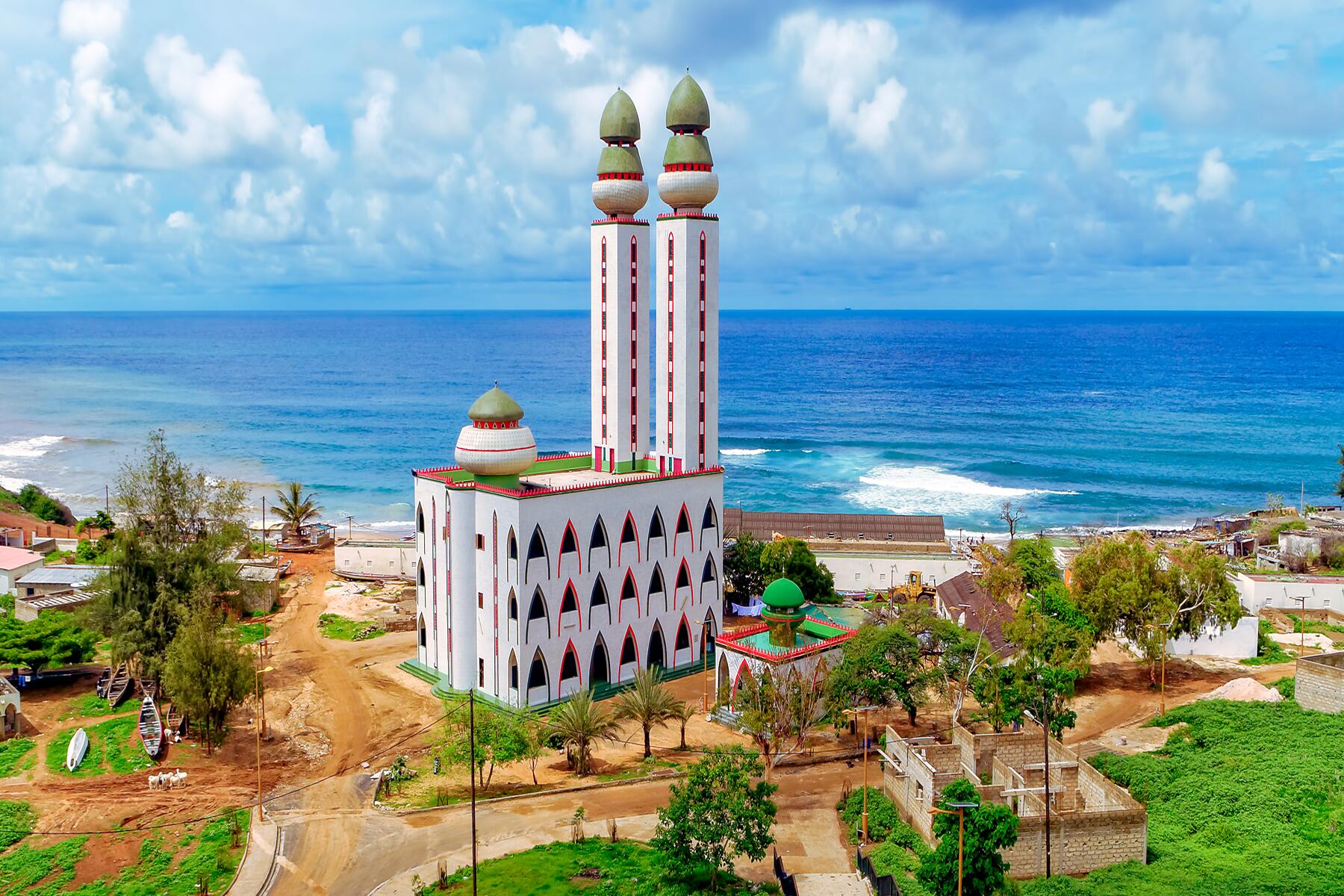 This inspired him to take the scenic route, and he pointed out places I should visit: the Sandaga Market, the Grande Mosquée de Dakar, the Monument de la Renaissance Africaine. At the roundabout, Ahmed stopped the car in front of a tony dress shop and walked up to a vendor outside who was selling small cups of coffee and fried bread.

“This is for you,” he said, handing me the snack as he entered the car. “You must be hungry.”

I giggled sheepishly, wanting to refuse because my American sensibilities have taught me that there’s an ask around the corner, but my stomach grumbled and I accepted. When we arrived in front of my new flat, I tried to pay Ahmed for the breakfast, but he refused. I forced the money into his hand, but he pushed it away, and he only accepted the payment for the airport trip. I was surprised by his actions, but ready for this type of conviviality. Senegal is known for its culture of Teraanga, a Wolof word that means hospitality. But this definition is limited. Teraanga is the national identity of Senegal, from its food culture (where everyone eats communal food from the same bowl) to its joint family structure (where generations live under the same roof, giving each family member a place in society and to feel connected to something bigger than themselves).

The afternoon sun collapsed, evening rose on the horizon, and I walked around my neighborhood familiarizing myself with the new sights and sounds. On one block there were luxury apartment buildings with photoshoot-ready balconies, on another block, there were crumbling detached bungalows, while fancy dress shops, supermarkets, and cafes were interspersed with outdoor markets, hawkers, and horses pulling construction supplies. The new and old world juxtaposed with every turn, but unlike many places, they were not in conflict with each other. Perhaps a consequence of Teraanga is that acceptance is celebrated, and this is manifested socially and politically. Senegal is considered one of the safest countries in West Africa due to its low street crimes, political stability, and its religious tolerance.

As the last call to prayer, the Maghrib, cried out on the distant speakers, I arrived in front of my flat with bags of fruits and baked goodies. The men who live in my building were sitting outside, sipping tea and watching young boys play football before darkness took hold, while the young girls shuttled between the local shops and their apartments carrying items needed for supper. The heat stopped stinging, and a gentle breeze touched my skin. My feet planted themselves in the red dirt and I gawked at the football game as if it was the last match of a lifetime. One of the spectators cleared a space on the bench for me to sit, and as I got comfortable, someone else handed me a small glass of hot sweet tea. Initially, I worried about catching COVID-19 from these men, but Senegal has one of the lowest cases in West Africa because of their strong community intervention and initiatives to keeping the disease at bay. The men resumed their conversation in Wolof, which sounded like rhythms riding rhythms without an ending in sight. And I sat in silence listening to them. For the first time since the pandemic began, I was breathing with ease.

That night, before I went to bed, I wrote in my journal, “We travel to experience cultures, uncover our true stories, and connect to something bigger than ourselves. When we feel connected to the place and its people, a deep sense of belonging emerges.”

Throughout my month-long stay in Senegal, I added many new friends to my life, and they added me to their network of friends and families. My connections made me feel both rooted in and miles away from the void of day-to-day life, and this slowed me down because my new relationships became the centering of it. I did not have to consume myself with busyness. I made notes in my journal: “When you get home, slow down and invite more friends over to dinner, donating your time is the equivalent of love, and create the world you want, and not the world you are expected to live in.”

My departure date loomed closer, and before I knew it, I was two weeks away from returning to New York City. Throughout Dakar, sheep were corralled into small pens on the sidewalk, and merchants waited day and night for potential customers. Tabaski, also known as Eid al-Adha, was scheduled the day after my departure. This religious festival is celebrated by Muslims as a celebration of Abraham’s willingness to sacrifice his son Ishmael to Allah. On the day of Tabaski, a sheep is slaughtered in a ritual sacrifice. Then families first distribute some of the meat to family and friends, and to the poor as an act of charity, and then keep some for themselves. According to my new friend, Fatou, Tabaski is Christmas and New Year rolled into one with lots of food, and I really wanted to attend.

In true Teraanga fashion, Fatou and her family hosted my friends and me over for a “mini Tabaski”-type lunch so we could experience Senegalese culture. We ate ourselves into a stupor. Fatou lived with her mother, centenarian grandmother, her siblings, their partners, and their children. Every hour, someone from her household offered us more things to eat and drink.

“Wow, this is the life,” my friend, Francelene kept saying. “We don’t have this type of hospitality in America.”

Fatou’s youngest sister started playing the latest Afrobeats hit, and my Francelene and I started dancing with the kids. Fatou’s mother looked on with joy as she bounced the youngest baby of the house on her lap.

In the evening, Fatou and I stood outside, waiting for my taxi to approach. The air was moist and there was a faint breeze, an indication that the rainy season was on its way. On one side of the road, older boys played football, while the girls their age played in the vestibules of their houses, and the little boys, young as three, roamed the neighborhoods unsupervised.

“I’m still surprised that these kids just walk up and down the streets without an adult,” I said to her.

“Somebody is watching them,” Fatou retorted. She pointed to everyone on the street, including both of us. “This is Senegal, somebody is always watching.”