Morocco’s Atlantic Coast is a treasure trove of architectural diversity and a rich, multifaceted heritage to delight any history buff.

Most tourists en route to Morocco head straight to Marrakech or Fez, drawn to their iconic medinas. But for architecture geeks, the country’s Atlantic Coast hosts a treasure trove of Portuguese fortresses, Syrian mosques, and 20th-century Art Deco that recounts a multicultural past.

Once the seat of Moroccan kings in Tangiers, the sultanate palace known as Dar al Makhzen now plays host to two curious institutions, the Museum of Moroccan Arts and the Museum of Antiquities. Built in the 17th century, the structure stands out for its green borders, polished white columns, and courtyard decorated in ornate tile work. Together the museums are a small time capsule of Moroccan regions, exhibiting Fez silks, ancient firearms, excavations from Roman colonies, manuscripts, and a Carthaginian tomb.

On Jamia El Arabia Square, you’ll find the Syrian Mosque towering over Tangier. Built to serve the local Syrian community, the tapered minaret, so unlike the typical indigenous angular minaret, is one of the defining features of this mosque. Its clean lines, tawny colors, and palms evoke a sense of the dune desert.

With squarish corners and a castellated gallery, the lighthouse of Cape Spartel is a striking, candle-like vision about 12 kilometers west of Tangiers, above the Caves of Hercules. Built by Sultan Mohammed IV in 1864, the tower still stands like a beacon overlooking the entrance of the Strait of Gibraltar.

Walking through the whitewashed streets of Asilah’s peaceful Medina, one can’t help but notice the abundance of street art. From Arabic calligraphy to azure animals to abstract murals, the walls are washed in all variants of hues, especially blues. Often missed by travelers, Asilah feels more like an undiscovered artists’ enclave, and once hosted the likes of Paul Bowles, Edith Wharton, Jimi Hendrix, and Henri Matisse.

Though closed to non-Muslims, the Great Mosque of Larache is worth a visit for its white and blue tower. Dating back to the 18th century, architecture buffs will appreciate the turquoise borders, Cordoba arches, and square minaret.

The ancient site of Chellah has been the home to a whole array of visitors through the centuries. At various periods, it was a Phoenician trade center, a Roman colony, Marinid necropolis, and the royal burial grounds of Berber Almohads. Quite remarkably, there are traces of most of these inhabitants throughout the site, which lends an atmosphere of abandon and timelessness. You can wander through the ruins and spy a Roman funerary stele, or admire the stork nest atop a 13th-century minaret. 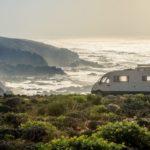 RELATED STORY
You’ve Never Heard of This Undiscovered Road Trip, But After You Read This You’ll Be Dying to Go
7 OF 15

In the 12th century, Yaqub al-Mansur, Caliph of the Almohad Dynasty, ordered the construction of an ambitious building in Rabat. The mosque and its adjoining minaret were to be the largest in the world, providing for up to 20,000 worshippers. After the monarch’s sudden death in 1199, however, construction came to a grinding halt. All that remains is a fascinating skeleton which includes an incomplete minaret, marble floor, and 200 columns, which was declared a UNESCO World Heritage Status in 2012.

The Mausoleum of Mohammed V is a majestic feat of the 20th century. The exterior is adorned with white ornate arches, intricate zellij mosaics, and a teal green roof; the interior, hand-carved cedar wood embellished with gold leaf. Within, the white onyx tombs of Mohammed V, who reigned from 1857 to 1961, and his two sons are guarded at all times by royal guards.

Perhaps nowhere else is the legacy of French influence as apparent as Casablanca. Once the seat of the French Protectorate, Casablanca’s Art Deco buildings seem to blend in seamlessly with Islamic geometric sensibilities. You only have to wander down the streets in the nouvelle city, as wide as European boulevards, to spy the plasterwork and wrought iron that characterizes Art Deco. Look for government institutions like the Post Office and the Palais de Justice, or historic hotels such as the Transatlantique and Hotel Volubilis.

The exquisite Hassan II Mosque lies on a promontory on Casablanca’s seaside, the largest mosque in all of Africa and the fifth largest in the world. As one of the few mosques non-Muslims can enter in Morocco, it’s definitely worth a visit. Completed in 1993, the design is a mix of granite, plaster, hand-wrought marble and wood from all over Morocco, the handiwork of 6,000 dedicated Moroccan artisans over five years. The whole complex can accommodate close to 105,000 worshippers.

The quiet town of El Jadida has several remnants left over from its Portuguese occupation, including ramparts, a synagogue, and Christian churches—but it’s the elegant cistern that stands out in memory. An ancient staircase leads down to a large room dominated by fan-like vaulted arches, like frozen palm trees. In the ceiling, light showers in through an oculus above, and in the center of the floor, an overflowing pool smothers the stones in a thin layer of water. Photographers are drawn year after year to the magical blend of light, darkness, and water that refracts a ghostly, otherworldly aura. Fans of Orson Welles may know that for his 1951 film Othello, the fight scene between Cassio and Roderigo was staged in this cistern.

Generally overlooked by tourists heading to Essaouira, the little town of Safi has a few surprises in store for the architecture geek. Most famous for its ceramic goods, no visit would be complete with a stop at the Collines de Potiers, the potters’ quarter, where you can see artisans huddled beside traditional wood-burning kilns and chimneys. Occupied by the Portuguese during the Renaissance, Safi also has two major forts, the seaside citadel Castelo do Mar or Castelejo, and the crumbling military outpost of Dar Al Bahar. In the middle of the city, you’ll find another military enclave called the Kechla, used as a prison until as late as 1990.

Essaouira means “the little rampart,” a testament to the fortress walls that enclose much of the old city. Listed as a UNESCO World Heritage site, the Medina is a strong example of a late 18th-century fortified town. Walk along the crenellated ramparts, and sea retaining wall for views of crumbling cannons, bastion, batteries, city gates and watchtowers. The architect Théodore Cornut, who designed the city of Mogador (future Essaouira), is said to have been inspired by the fine fortifications of Vauban, built by a military engineer under King Louis XIV. To the south along the shore, the Borj El-Berod watchtower lies in ruins on the banks, swallowed by the sea. At high tide the water rushes in, so it’s only accessible in low tide. Popular folklore relates that Jimi Hendrix was inspired by these ruins to write “Castles Made of Sand,” though this is false, as the album was written two years before he visited Essaouira in 1969.

Should you find yourself in the major port city of Agadir, stop by the Lebanese (Loubnane) Mosque. Around 70 percent of the old city was felled in an earthquake in 1960, meaning most of Agadir’s buildings date back to the late 1960s and beyond. First glance of the mosque and its borders of brown and white suggests a humble exterior, but this impression quickly vanishes upon approaching. Ornate outlines, geometric lattice, and beautiful archways grant the mosque a sophisticated and dignified air. Only Muslims are permitted to explore the inner courtyard and decorative ablutions fountain.

Saltwater and sand dunes characterize the city of Sidi Ifni, where Art Deco buildings hearken back to its past as a profitable Spanish outpost. There is something isolated and eerie about these European influences in the middle of the desert on the edge of the Anti-Atlas Mountains, as demonstrated best by the municipal buildings at Place Hassan II.