If you like to imbibe while you fly, this is the airline you should try.

I’ll go almost anywhere if the drinks are good. So when I was invited to fly on an airline that’s not only famous for flying on cooking oil, robots, and an alcohol so coveted it’s the object of the poshest game of Gotta Catch ‘Em All in travel, I was in.

That flight is KLM’s business class, beloved among plane, booze and history nerds alike and reportedly the best way to get to Holland. But does the booze the experience live up to the considerable hype? I’m prepared to drink until I find out.

For the oldest still-operating airline in the world, KLM provides a surprisingly futuristic experience. Ubering to the airport in an electric car to board a plane that’s flying on sustainable biofuel is about as 3017 as it gets. Had I flown just a few weeks later, my carry-on would have been carried by a self-driving robot that would guide me to my gate. But, unfortunately for my Tumi, the robot Care-E made her debut a few weeks after I did.

But although my Tumi had to suffer the 21st-century indignity of being rolled through the airport by hand, it did get to go through a business-class-only security station that looks like it belonged on a spaceship. I did not tell it about KLM’s Google Home AI that will tell you just what to put in your carry-on based on your destination.

All of this emphasis on helpful tech is what KLM calls “Concierge Service,” a passport to the fun part of the future where everything is AI assisted and gorgeously designed; where you can buy your tickets on WeChat, ask KLM’s AI BiBi to change your seats, or get a Twitter response to your question in seconds thanks to some helpful bots.

When you arrive at KLM Crown Lounge after your concierge care, things feel decidedly 2018, but not in a bad way. It’s spacious and bright and features plenty of cold salads, sandwiches, and seats to give it the warmth of a mid-range college’s cafeteria.

Sure, it could use an upgrade (and those are currently underway) but it will take away some of the nostalgia frequent Schipol Airport fliers have for the place. And while the upgrades will likely be ahead of their time, everyone will likely spend a few years reminiscing about how they liked it the way it used to be.

There’s no free-flowing champagne here, but there were plenty of other mid-shelf beverages at the bar to keep me occupied until it was time to board. 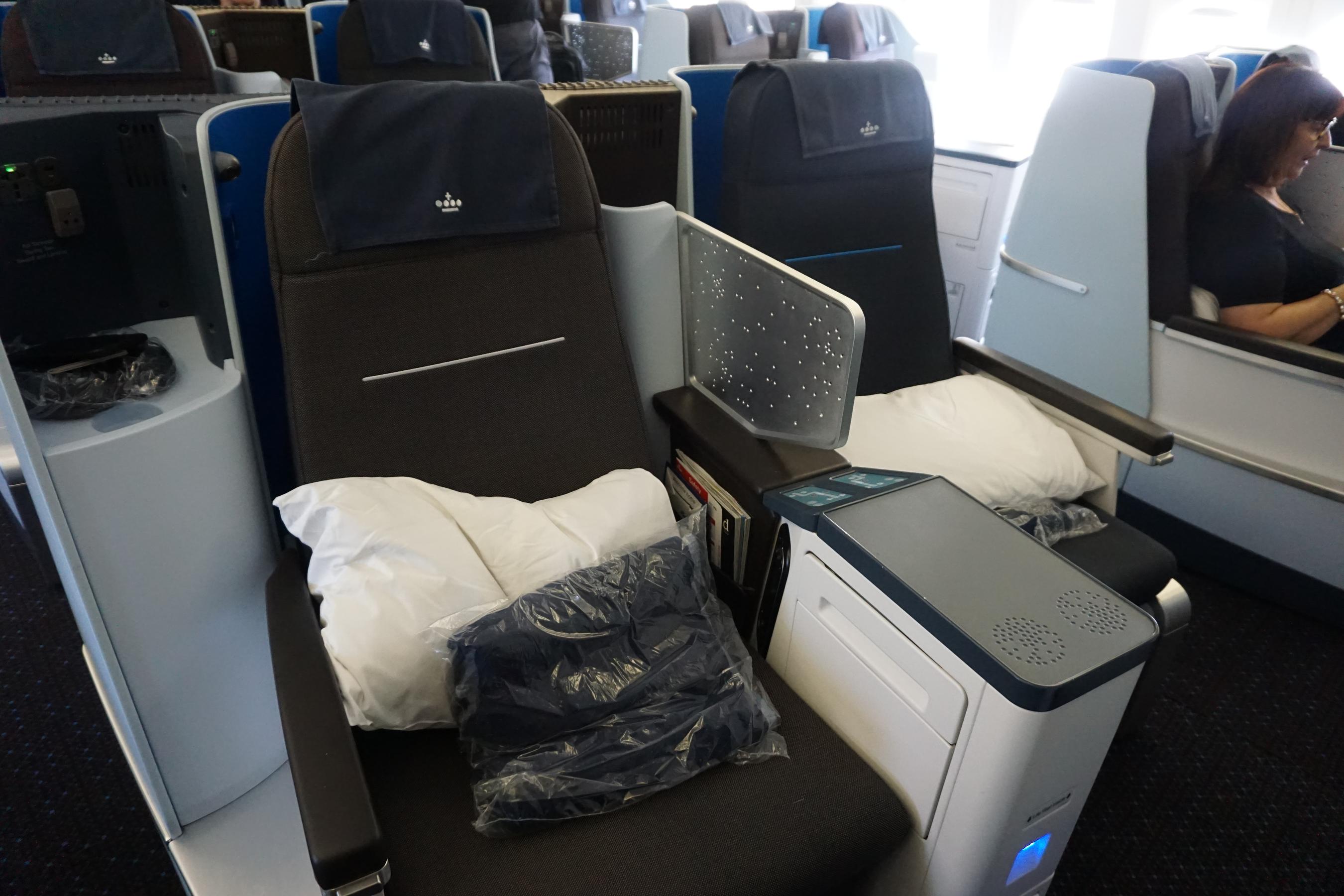 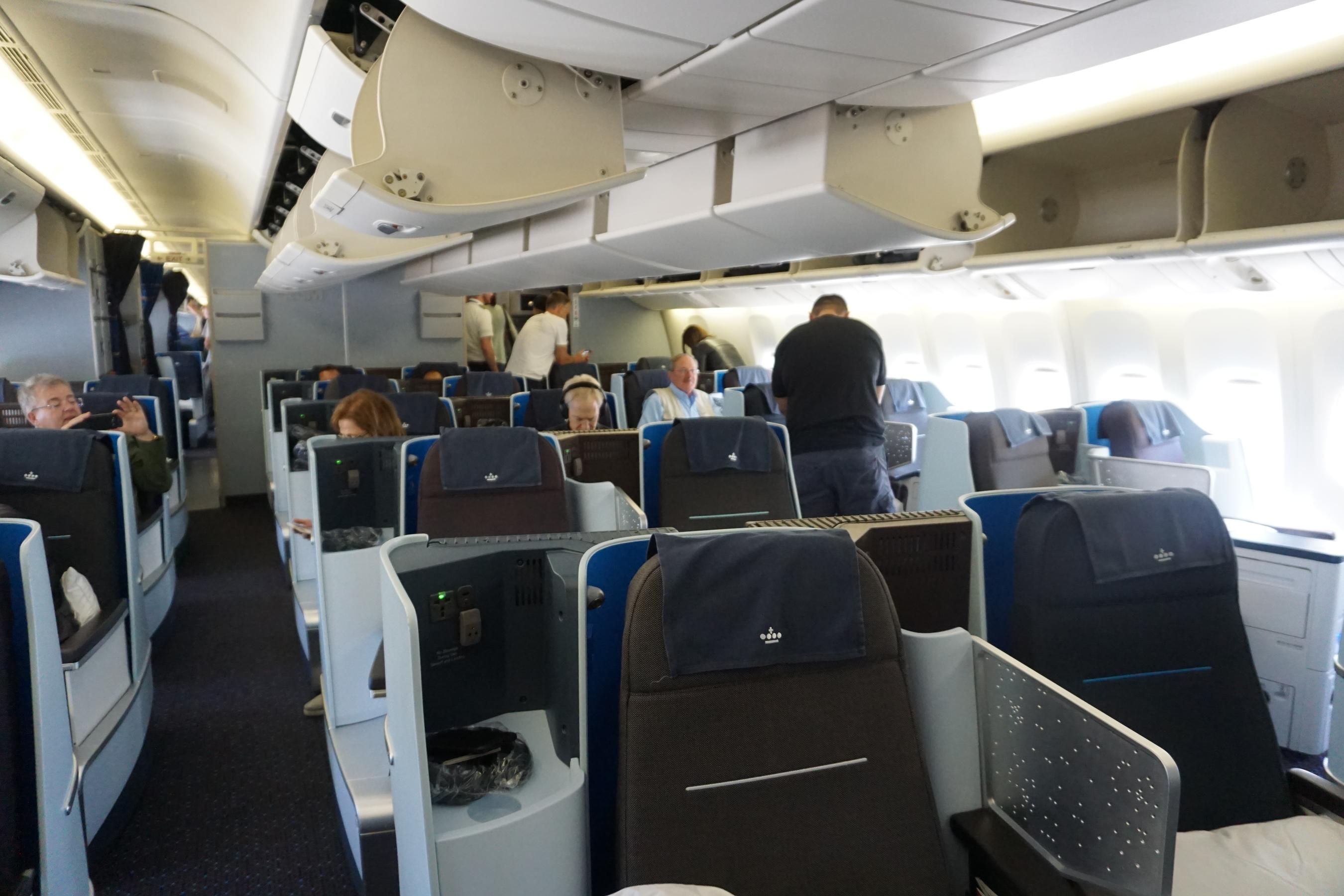 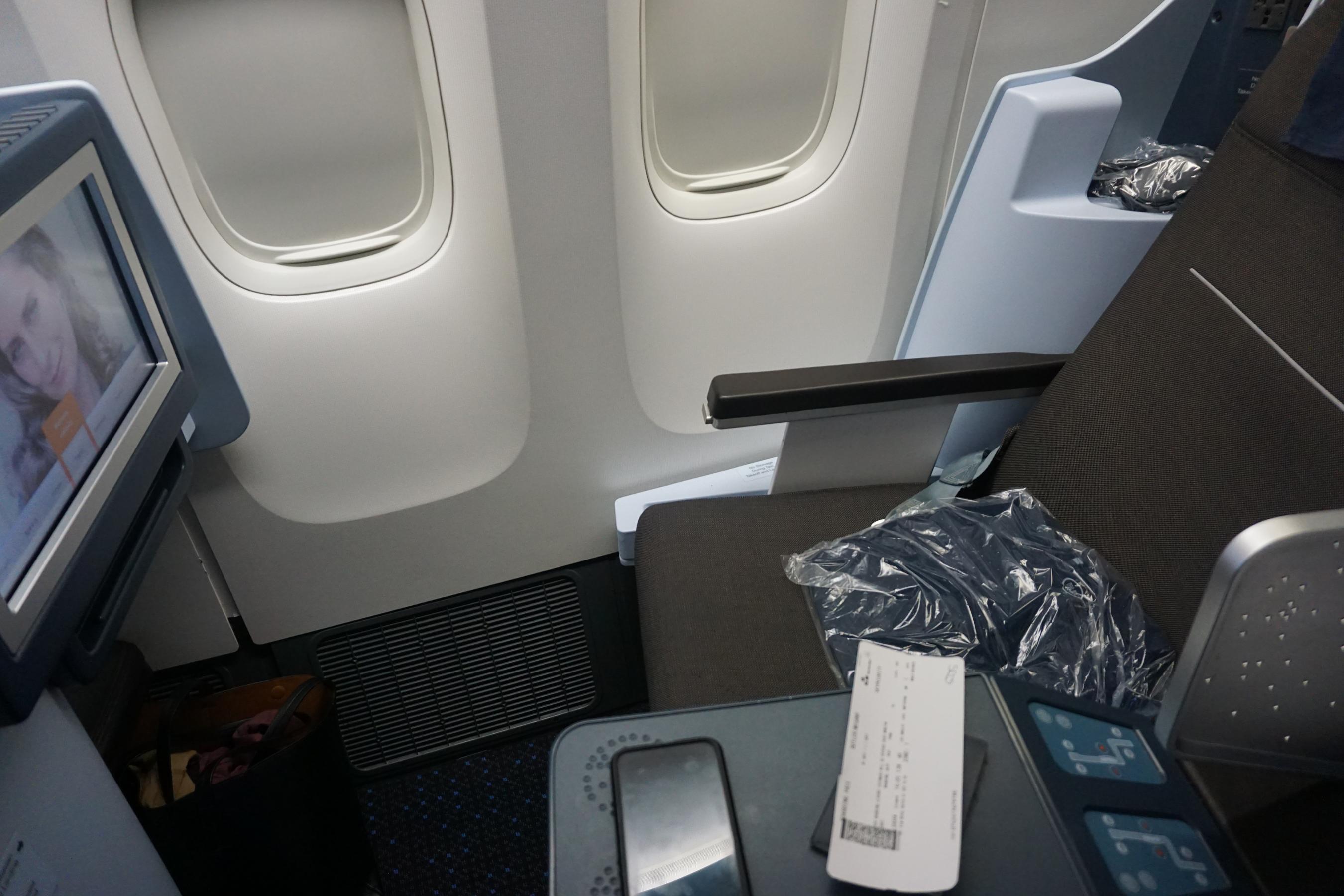 My KLM flight had a vintage feel. I flew on a 777-200 which hasn’t yet gotten the New World Business Class update that the 787-9 and other planes have had. The major difference between the old and the new KLM Business class, besides a general refresh, is the seat configuration.

How awkward that is will depend on how well you know them. If you’re shy and flying alone, just pick the middle seats which all have aisle access or chose new World Business Class Flights whose seats all have aisle access. Whatever seat you get, you’ll find a convenient universal outlet, a USB port, a shelf to store several devices, and seats that go blissfully, comfortably all the way flat for some of the best sleep you can have on a flight. 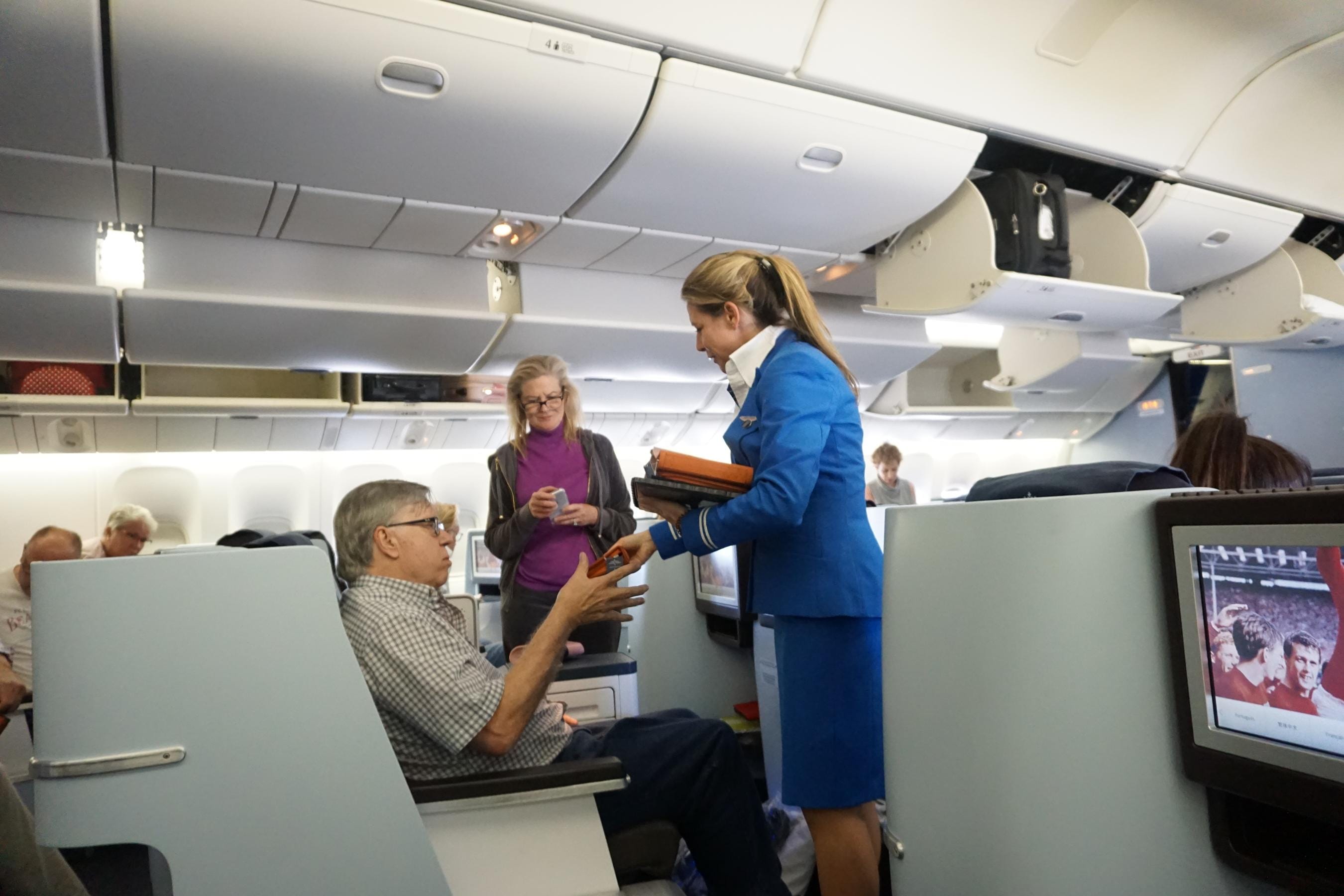 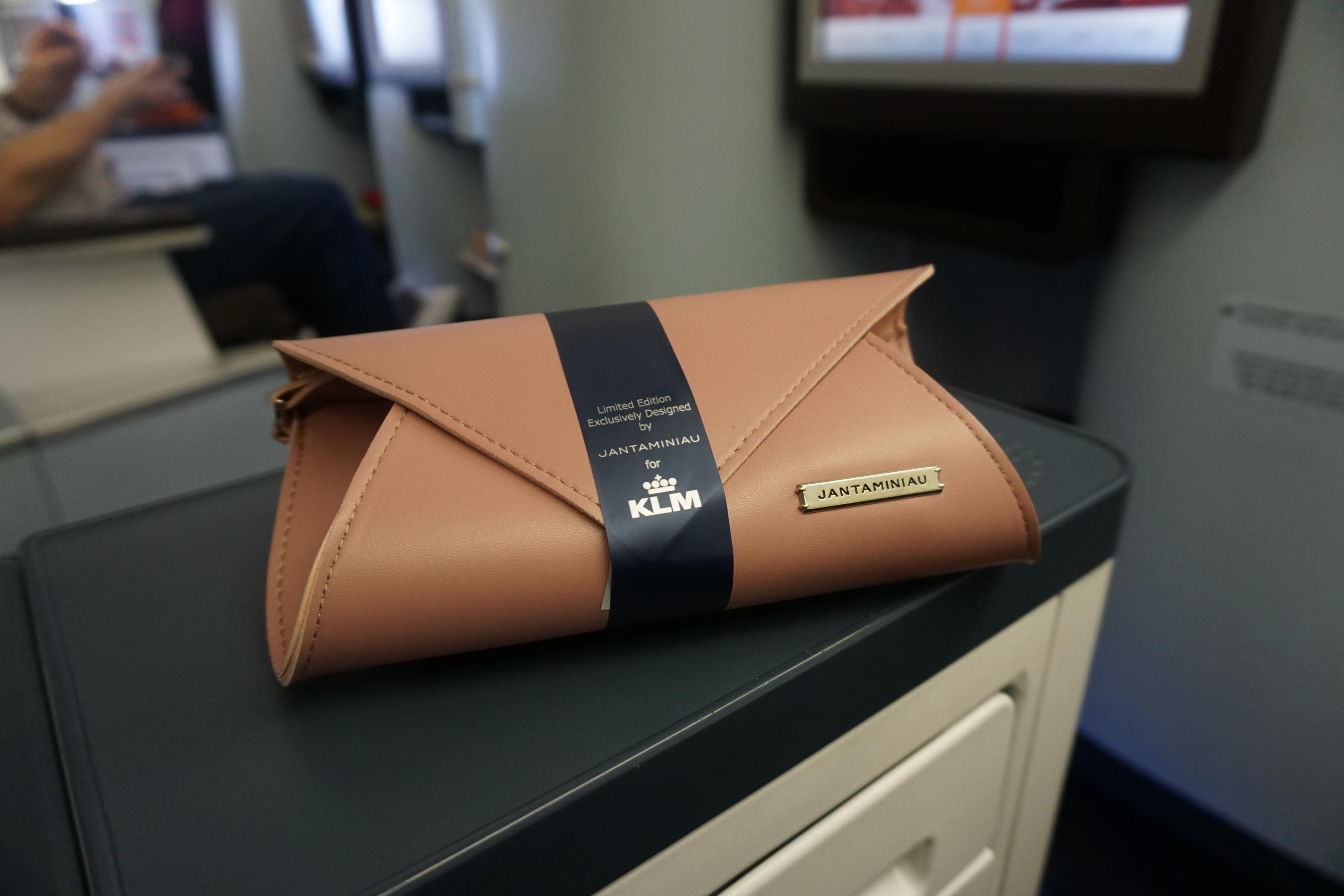 My round of service on KLM didn’t start with booze but with an amenity kit. KLM, has one of the most attractive in the airline industry. They’re designed by famous Dutch fashion designer Jan Taminiau and gendered. The one I got was pink and adorable and I still have it.

Champagne was a close second, delivered by my flight attendant for the flight, Julia, who was perhaps the nicest crew member I’ve ever traveled with. In fact, the entire flight crew was of the ilk who seems to know just what you want before you’re sure of it yourself. As soon as I thought that I might want something, there was a crew member who just happened to be walking by, waiting to catch my eye to ask if they could re-fill my drink or get me a snack.

If you’ve never sampled Dutch TV before, I’m excited to tell you that this is your chance to discover the very specific brand of humor that hails from The Netherlands. I chose Huisvrouwen Bestaan Niet, a movie that looked a lot like it was going to be a standard rom-com until the relationships took a shocking, mildly-inappropriate and hilarious turn. It was delightful.

If reading subtitles isn’t your thing, you can check out what will be available on board in English (or any other language) on KLM.com. Which is what I should have done so I would have realized that flying on six long-haul flights in a few weeks meant that I’d burned through my list of relatively-new releases that I wanted to see and I would have put a few films on a flash drive. Instead, I ended up forcing myself to watch Red Sparrow. I do not recommend it. 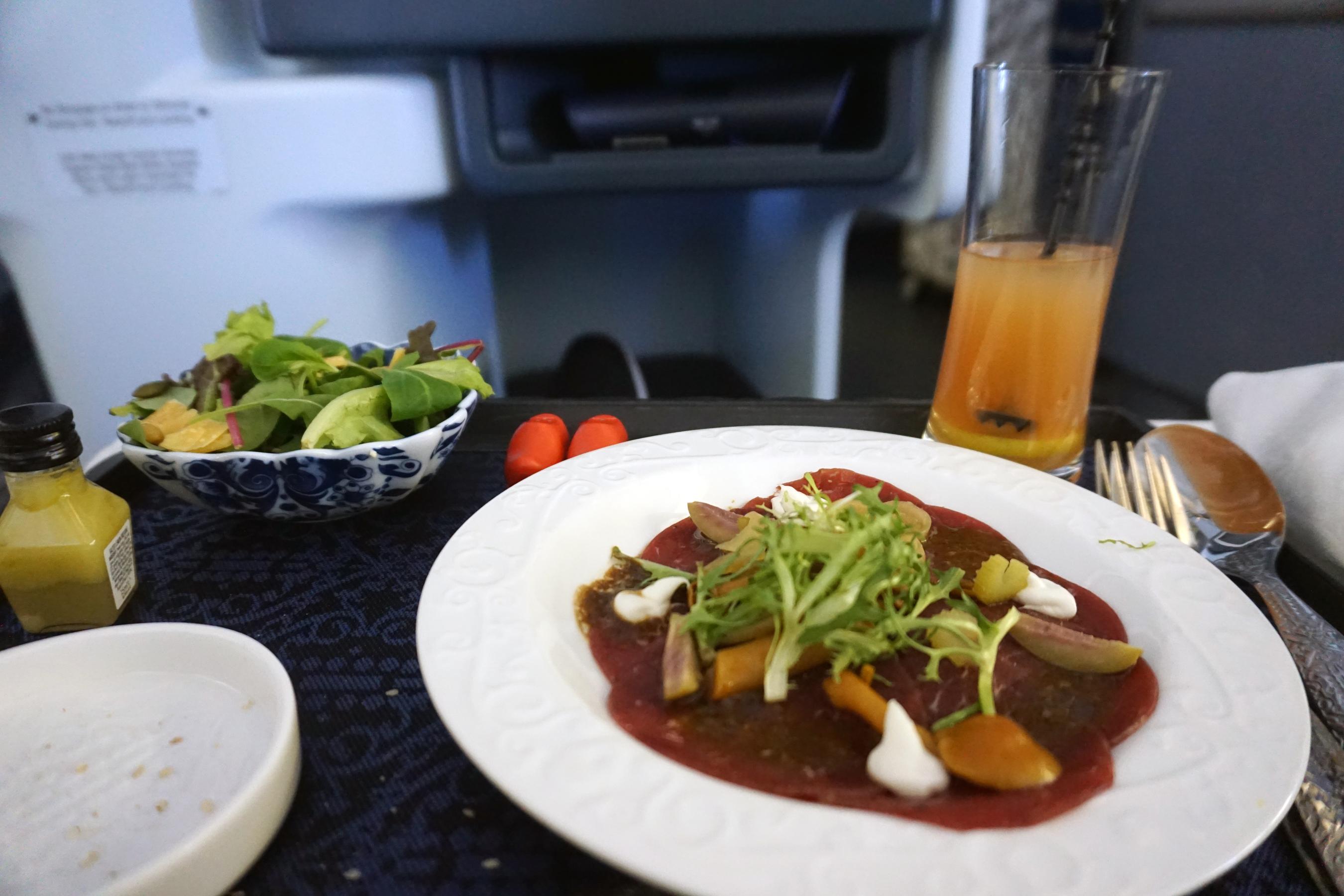 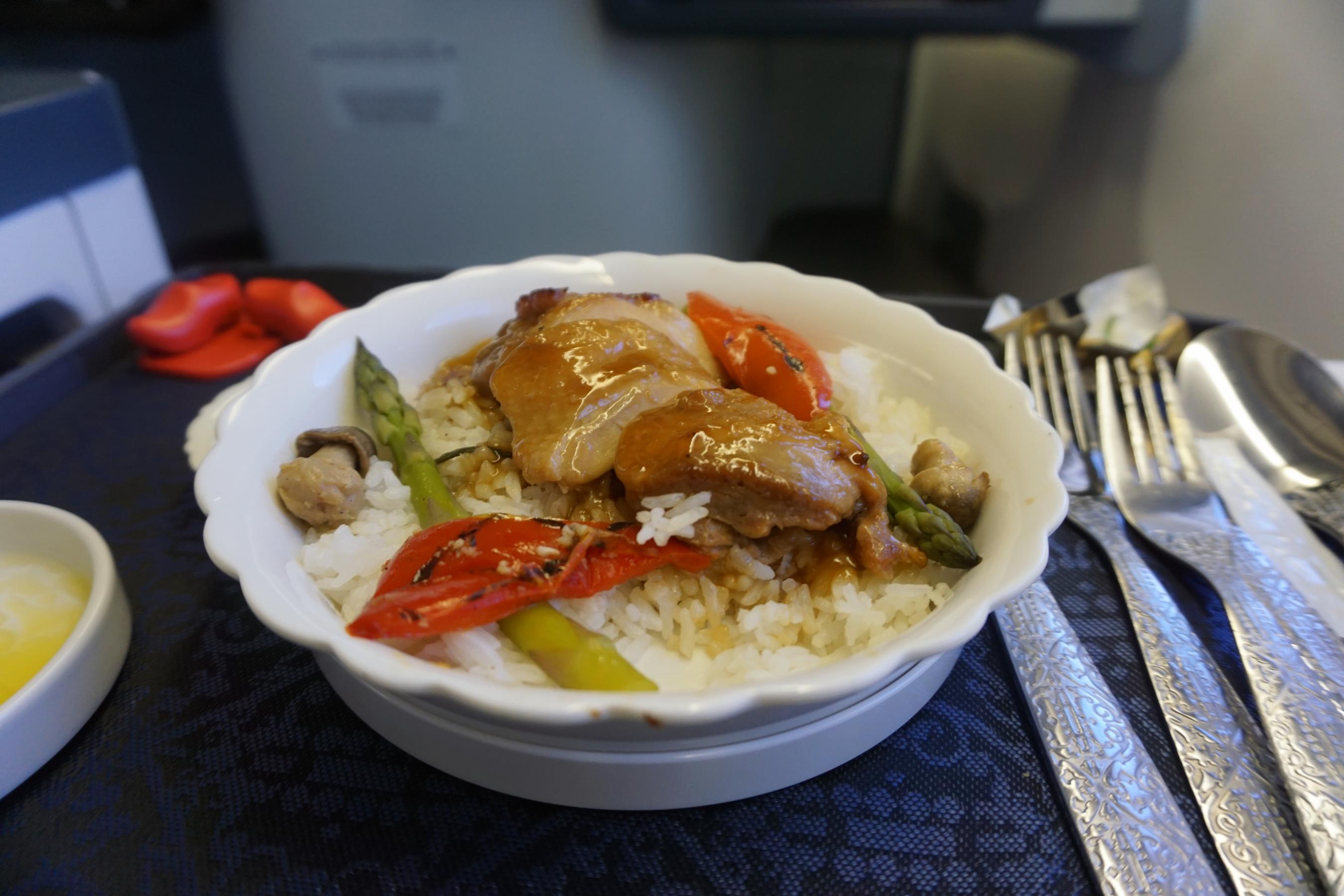 When I saw beef carpaccio on the menu, I ordered it without hesitation, which is some of the highest praise an airline can receive. Everything I had in-flight was delicious yet simple, which is why I think the food on KLM is particularly good. Instead of trying to find new and creative ways to serve chicken cacciatore that does its best to conquer airplane galley limitations and compromised taste buds without being unpalatable, KLM serves food that never needed a lot of finagling in the first place. Its all served on their signature Delft china which is an exciting experience in and of itself. The salt and pepper shakers come in adorable plastic red clogs which I immediately stole and I’m not sorry. 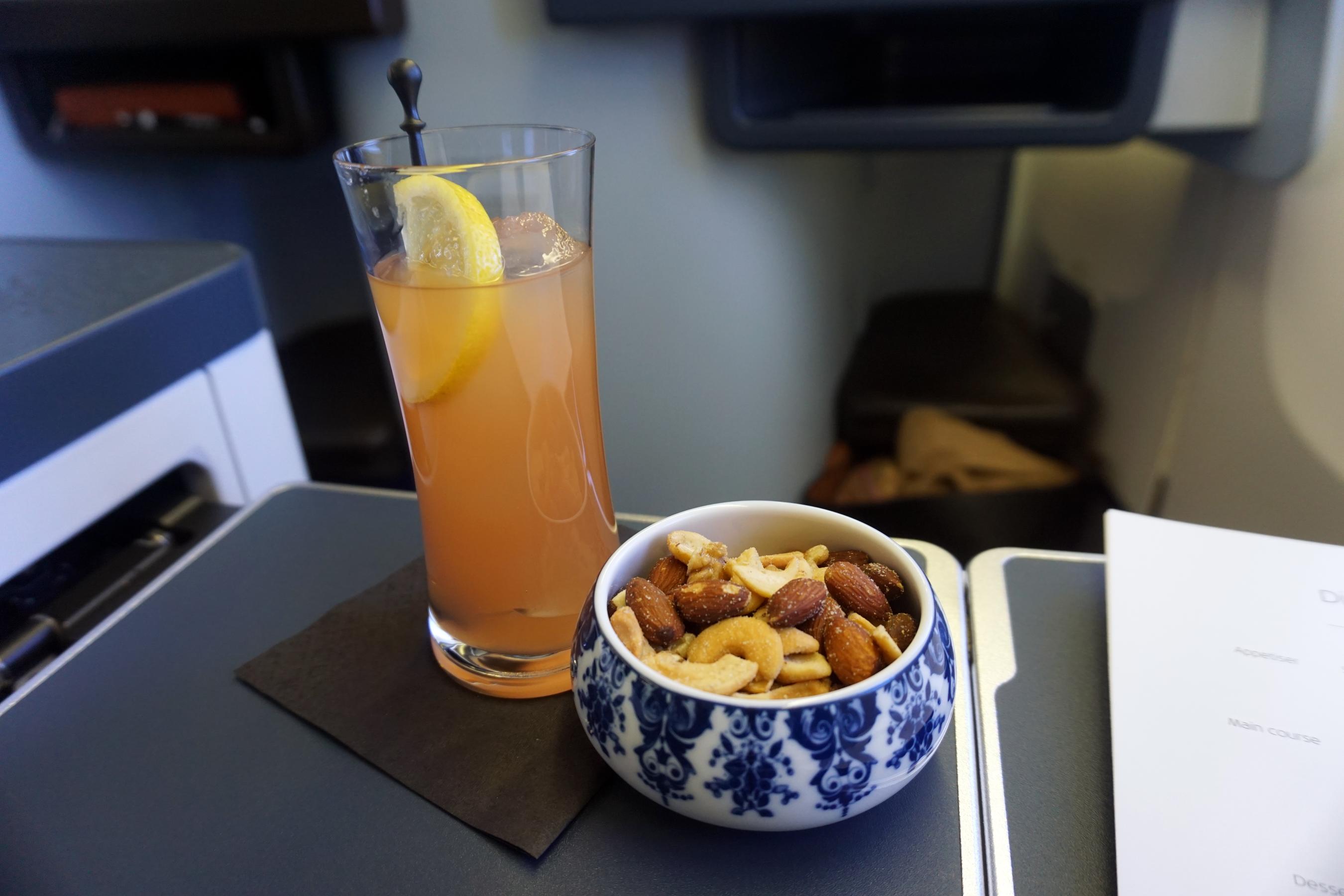 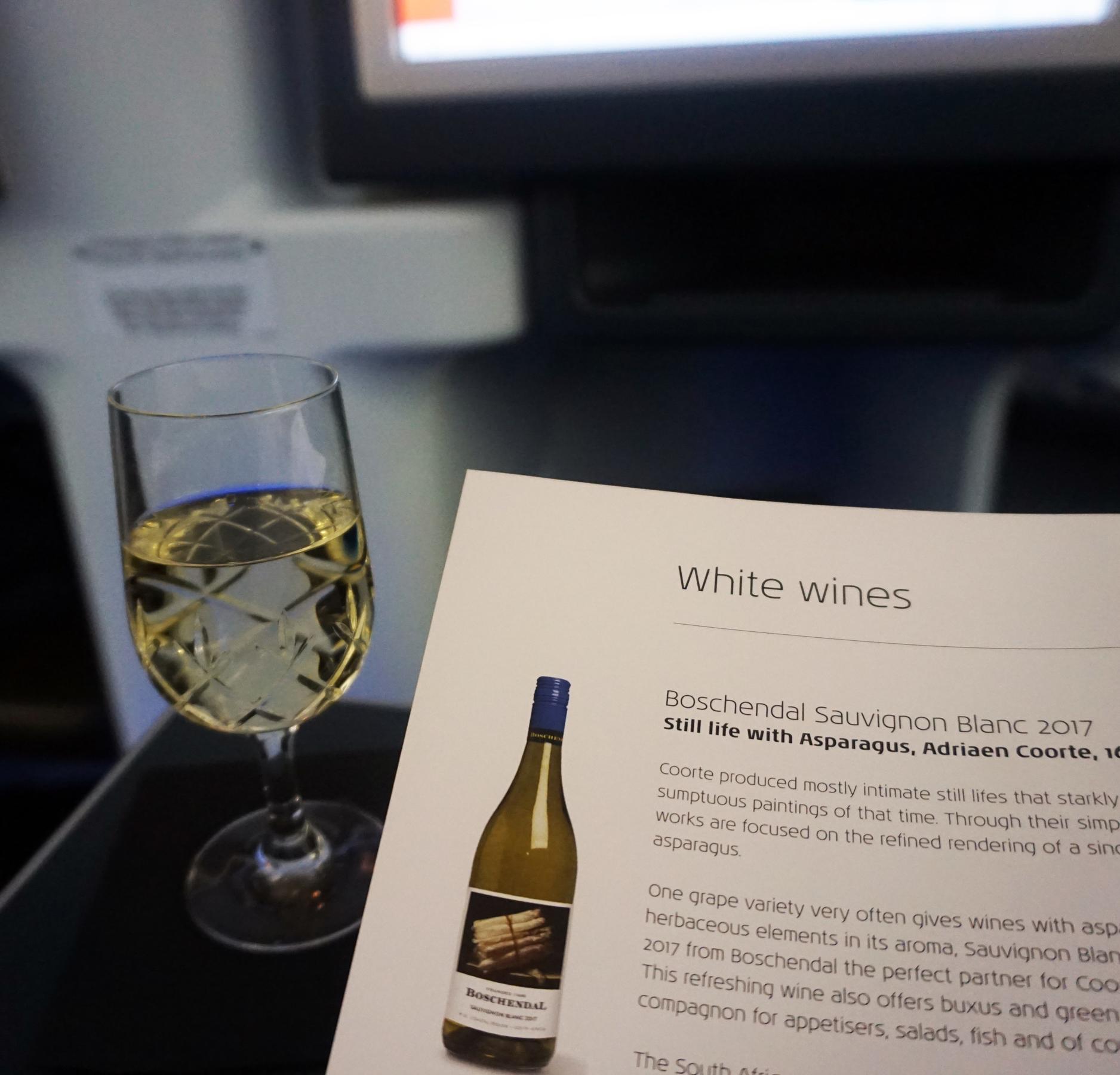 And now we get to the good stuff. Even those who aren’t as enthusiastic about drinking while flying as I am (we probably wouldn’t travel well together) should know that bottomless free alcohol is a major feature of any business-class flight and drink a lot anyway. After all, booze is a major way that an airline distinguishes itself and there’s always a lot to choose from.

It tastes like taking a business call on Skype while still in your boxers and on holiday in Tahiti. I drank three. So many people like it that much that the concoction is also available by the bottle.

To make drinking them a little more fun, KLM has paired its wine selections with famous paintings on display in the Rijksmuseum. The pairings playfully match paintings like Vermeer’s The Milkmaid with Abbotts & Delauney’s 2016 Sauvignon Blanc (because it’s “feminine and fresh”).  with There’s even a meal pairing guide here.

While there is only one cocktail option on KLM, they have all the basics covered when it comes to hard alcohol. But, as in economy class, you’ll have to limit your orders to two-part drinks: gin and tonic, whiskey and coke with a mid-range selection of drinks.

While every flight has great alcohol, KLM has it’s own liquor: jenever. It is a special kind of Dutch gin, triple distilled,aged in oak, and delicious: like gin and vodka had a baby that spent its summers in France.

It’s so good that KLM wanted to give it to all of its passengers. Unfortunately, handing out bottles of booze was extra illegal. So they put the booze in collectible, Delft Blue models of traditional houses and gave those away instead. Thanks to that moment of genius, looking forward to getting your own rare house (they’re only given to business class passengers and there are only 99 models in existence) is one of the best parts of taking a KLM flight.

Everyone pokes their head above their seats when the flight attendant comes around with the tray. And, to my surprise, I got to pick first and watch everyone looked on with envy as I nabbed the biggest one. I heard the jenever sloshing around inside, and then I didn’t drink it.

The booze I waited for all flight for is still in its house. Because once you have that collectible in your hot little hands, you realize you’re part of a special airline club that booze-lovers started. Which makes a Delft House more than valuable–it’s a part of history.

Plus, you can totally buy jenever at almost any bar in Amsterdam. You can just point to it and they’ll package it up for you. I have four on my bar right now. And it’s delicious.

And I can say the same for everything about this flight. Not only was it the most comfortable way I’ve ever gotten to Amsterdam, but it was a world-class, historic flying experience that every frequent flier should experience at least once. And if you do earn your Delft house and manage to sneak a taste, shoot me a message and tell me how it was.