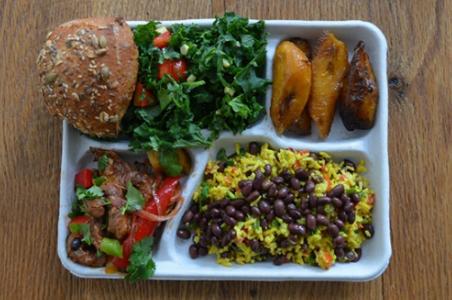 Food is always a window into other cultures, so I'm currently fascinated by this collection of photographs documenting school lunches from around the world. These photos have all been styled within an inch of their lives, because I doubt any school lunch anywhere looks this good, but based on the food alone, I wish I could have grown up in Italy, Spain, Greece, or France. Anywhere but the U.S., really. —Michael Alan Connelly, Editor, Fodors.com

After its series finale two weeks ago, I’m still going through quite a bit of Parenthood withdrawal. The NBC show lasted for six seasons but was consistently snubbed whenever Emmy season came around. This New Yorker article articulates the power of the series as a whole and makes me wish there was another show on television that captured complex family dynamics this well. —Annie Bruce, Digital Editorial Intern

I missed my subway stop while reading Patrick Leigh Fermor's A Time of Gifts, the first part of the renowned British travel writer's account of his epic solo walk from London to Constantinople (Istanbul) between 1933 and 1937. With erudition, wit, and verve he shares equally well the pleasures of walking the Netherlands' canals in winter and visiting Vienna's Spanish Riding School. Language quirks, nature, old buildings, and more all inspire him in this classic narrative of prewar Europe.  —Linda Cabasin, Editorial Director

This week, I’m taking a (literary) journey to 17th-century Amsterdam. In The Miniaturist by Jessie Burton, a young bride is brought to the city to live with her husband’s family, an arrangement devoid of romance. Burton’s writing evokes the damp, salty air coming off the city’s canals and an encroaching worldliness brought on by all-encompassing, maritime trade. Like the miniature figurines in the protagonist’s cabinet house, the cast of characters is truly singular and continually manages to surprise. —Megan Mills, Publishing Assistant

Leaving Before the Rains Come by Zimbabwean Alexandra Fuller chronicles the author’s departure from her native Africa for the United States with her American husband, river guide Charlie Ross and ultimately, her departure from her marriage. While Fuller’s award-winning 2002 memoir of childhood on the disintegrating family farm in what was then white-ruled Rhodesia, Don’t Let’s Go to the Dogs Tonight, was essentially a love story between the writer and her native country, her latest book tells a melancholy tale of love and loss with her failing marriage providing the arc of the story. Now a resident of Wyoming along with her three children, Fuller insists she is no longer African while simultaneously writing that she knew as a child that if she ever left Africa “an essential part of my connection with this earth would become forever detached, like a soulless body or a heartless lover.” One gets the feeling that the love affair isn’t quite yet over. —Kristan Schiller, Editor, Cities and Cultural Destinations