A Traveler’s Guide to Lisbon’s Kiosks

Visitors to Lisbon are usually quick to fall in love with the city’s ubiquitous quiosques de refresco, vintage-chic food and drinks kiosks that have become as much a part of the city’s drinking and dining scene as ginginha and pasteis de nata. Take a stroll through the city, and you’ll soon spot these ornate iron structures, whose unique style reflects Art Nouveau and Moorish influences and history dates back to the 19th century. More than an exercise in nostalgia, the strategically located kiosks have come to be an emblem of the city’s relaxed style of eating and drinking. Every local has their favorite, and a ‘kiosk-hop’ is a great way to eat and drink your way around the city’s tourist hotspots. 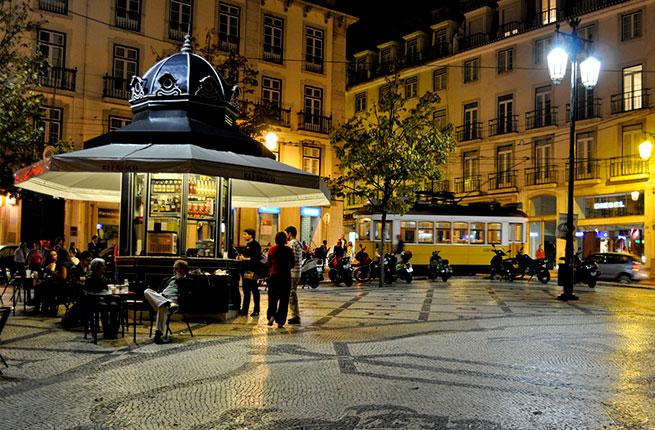 With prime positions in some of the city’s most scenic locations, and always surrounded by tables and chairs spread out across the esplanade, the kiosks are perfect for a mid-stroll pick-me-up, or an evening’s leisurely drinking and dining. Many serve the same quintessentially Portuguese cordial drinks that kept strolling Lisbonites refreshed in centuries past—the most famous of which is capilé (made with herb extracts including maidenhair and orange flower). If you want something with a little more kick, many kiosks now sell caipirinhas—the sugarcane rum and sugar cocktails that have become ubiquitous in the city and underscore Portugal’s strong connections with Brazil. 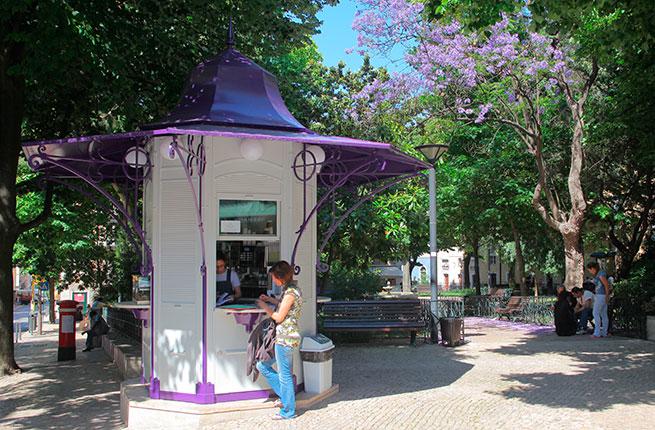 Despite their vintage appearance, however, it’s only recently that these handsome and handily-located drinking and dining spots began to establish themselves as key components of Lisbon’s famously lively street life. Popular during the late 1860s, they had fallen out of fashion by the turn of the century, and were left abandoned until 2009, when local entrepreneur Catarina Portas, founder of retro-chic brand A Vida Portuguesa, hit upon the idea of harnessing the kiosks’ vintage charm. Their success sparked a trend that continues today. Fellow entrepreneurs revived dilapidated kiosks and opened new ones, and today the quiosques offer everything from traditional treats to sushi—there’s even a kiosk that claims to sell the “Best Chocolate Cake in the World.”

Visitors can nibble sushi outside the Basilica da Estrela  as they wait for the number 28 tram, cool down with caipirinhas in front of the River Tagus, or enjoy an ice cream as parakeets flit noisily through the trees at one of the city’s many leafy parks. Many have Wi-Fi connections, which might detract a little from the old-school vibe, but is certainly handy if you want to check the location of your next kiosk stop. Each of Lisbon’s kiosks has its own unique appeal, but here’s our pick of some of the best the city has to offer. 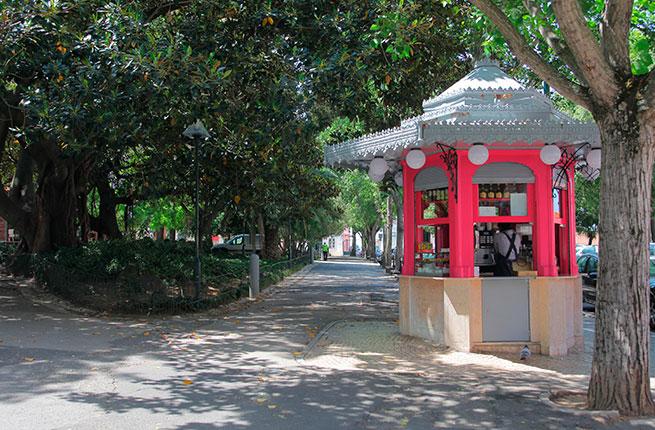 One of Lisbon’s original kiosks, brought back into service in 2009, this ornate kiosk has a great location on the flagstones of one of downtown Lisbon’s most impressive plazas. With the handsome Igreja de Sao Paulo as a backdrop, this is a pretty spot to enjoy the traditional cordials such as capilé, or the red currant drink groselha.

The best choice for families, this bright red kiosk next to the Mercado da Ribeira scores major kid-friendly points for the adjoining playground. The food is simple rather than sophisticated—think cheese sandwiches and pastries—but jugs of potent sangria and bowls of marinated olives will keep the grownups happy. Bonus points for providing overhead heaters and handing out blankets when the sun dips over the river and the breezes over the water make things chilly.

Enjoying a plum position in front of Lisbon’s cathedral, this busy kiosk serves refreshing lemonade, ginginha, and port wine alongside traditional foodie treats such as queijada (sweet cream cheese tarts). The kiosk does a roaring trade thanks to its location in prime sightseeing territory, but it’s no tourist trap—the coffee and pastries are genuinely delicious.

Who wouldn’t want to visit a kiosk that claims to sell “the best chocolate cake in the world”? It’s a bold claim, but there’s no denying that the rich slabs served at this Avenida da Liberdade kiosk are delicious. Toasted sandwiches, juices, and sangria are also on the menu, as is a good Wi-Fi connection and occasional DJ sets during the summer.

This waterfront kiosk a short stroll from the Praça do Comércio has an expansive terrace, and it’s put to good use. During the warmer months, sightseers and Lisboetas alike gather here to catch some rays and watch the boats glide by as they sip a caipirinha, gin and tonic, or cold beer, while local musicians and DJs provide a musical backdrop. This is the kiosk to come to for that ‘I’m on vacation’ feeling. Nearby, the Ginginha do Carmo kiosk on the Praça do Comércio specializes in ginja (Portugal’s famous sour cherry liqueur), which can be sipped from a chocolate cup.

There’s not one but two kiosks at this famous miradoura, which takes on something of a party vibe after dark during summer weekends when DJs take to the decks. It’s also a favorite spot for romantic couples to come and watch the dramatic sunset over the river. Temperatures tend to drop when the sun goes down, so wrap yourself in a blanket and sip a hot spiced wine to keep the chill at bay as you admire the view.