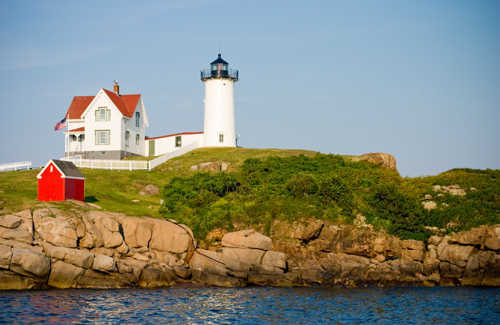 Perched high on rocky ledges, on the tips of wayward islands, and sometimes seemingly on the ocean itself are the more than five dozen lighthouses standing watch along Maine’s craggy and ship-busting coastline. Not all are open to the public, but here are some of the best ones to visit from as far south as York to the country’s easternmost tip at Lubec.

More commonly known as Nubble Light for the smallish offshore expanse of rock it rests upon, Cape Neddick Light sits a few hundred feet off York Beach. With such a precarious location, its grounds are inaccessible to visitors, but close enough to be exceptionally photogenic, especially during the Christmas season when the Town of York hangs Christmas lights and wreaths from the lighthouse and its surrounding buildings (Santa Claus makes an appearance via lobster boat at the annual lighting celebration). You also can view it from Sohier Park. Notice that it emits a red light. 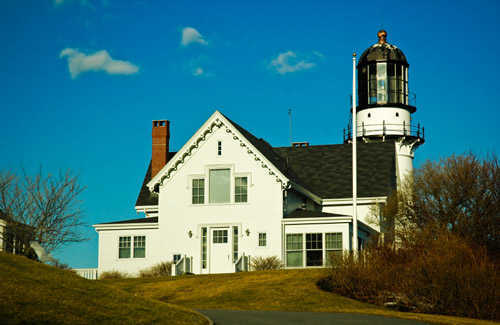 Two Lights State Park, as the name suggests, is home to two lighthouses. Both of these Cape Elizabeth structures were built in 1828, the first twin lighthouses to be erected on the Maine coast. The western light was converted into a private residence in 1924; the eastern light still projects its automated cylinder of light 17 mi out to sea, from a height of 129 feet, and is the subject of Edward Hopper’s Lighthouse at Two Lights (1929). The grounds immediately surrounding the building and the lighthouse itself are closed to the public, but the structure is easily viewed and photographed from the nearby parking lot. Explore the tidal pools for the small snails known as periwinkles. Tip: If it’s foggy, don’t stand too close to the foghorn, and in season (late March through late October) be sure to eat a lobster roll at the Lobster Shack Restaurant—but do not feed the seagulls; you will be publicly chastised on the restaurant’s loudspeaker if you do. 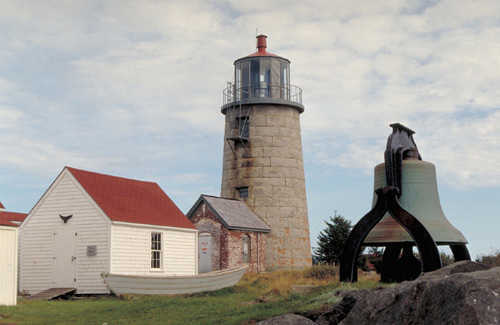 Only the adventuresome and the artistic see this light, because Monhegan Island, known both for its fishing and artistic communities, is accessible by a 90-minute ferry ride. To reach the lighthouse, you have an additional half-mile walk uphill from the ferry dock. But it’s well worth the effort, especially if you enjoy island life—it’s nothing but the rugged North Atlantic out here. The light was automated back in 1959, and since the early 1960s the former keeper’s quarters has been home to the Monhegan Museum, which has exhibits about the island more so than the lighthouse. The tower itself is closed to the public. Tip: If you’ve made it this far, stay a quiet night at one of a handful of lodging options on the island, lulled to sleep by muffled waves and the distance from the mainland. 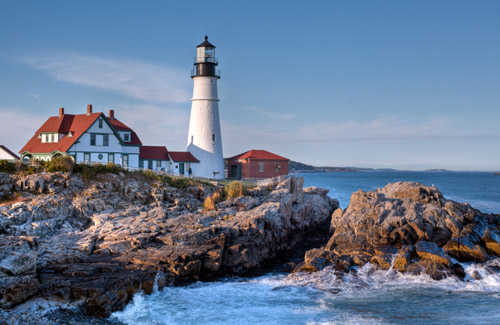 The subject of Edward Hopper’s painting Portland Head-Light (1927) and one of Maine’s most photographed lighthouses (and its oldest), the famous Portland Head Light was completed in January 1791. Its first keeper, Revolutionary War veteran Captain Joseph Greenleaf, was appointed by George Washington. At the edge of Fort Williams Park, in Cape Elizabeth, the towering white stone lighthouse stands 101 feet above the sea. The United States Coast Guard operates it and it is not open for tours. However the adjacent keeper’s dwelling, built in 1891, is now a museum, where you can inspect various lenses used in lighthouses. Visitors can also explore the numerous trails within the park, as well as its grassy areas, popular for picnics, kite flying, and watching ships from around the globe enter Portland Harbor. 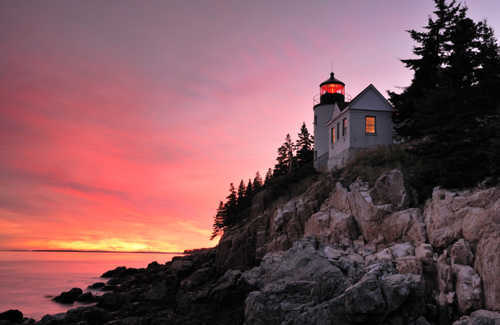 One Maine lighthouse familiar to many because it is the subject of countless photographs is Bass Harbor Light, at the southern end of Mount Desert Island. It is a short drive from Acadia National Park and the town of Bar Harbor. The station grounds are open year-round, but the former keeper’s house is now a private home for a Coast Guard family. This lighthouse is so close to the water it seems as if a blustery wind could tip it over the rocks right into the North Atlantic. Tip: To photograph Bass Harbor, get up close, or walk a short trail for a horizontal shot of the lighthouse and its outbuildings. Also use a tripod or stand firm in the salted wind. 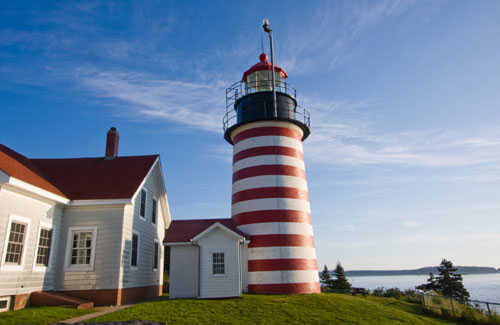 Originally built in 1808 by mandate of President Thomas Jefferson, West Quoddy Head Light sits in Lubec on the easternmost tip of land in the mainland United States—so far east that at certain times of the year it’s the first object in the country to be touched by the rising sun’s rays. The 49-foot-high lighthouse, now famously painted with distinctive red and white candy stripes, is part of 541-acre Quoddy Head State Park, which has some of the state’s best wildlife watching, including humpback, minke, and finback whales. Learn more in the lightkeeper’s house-turned-visitor center. You also can climb the 50 steps to the top of the tower. 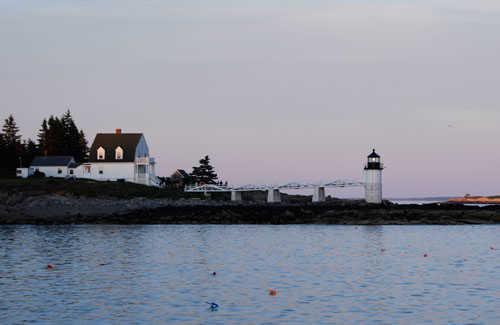