Truly, a tour with the Wright stuff.

He was a scallywag, an artist, a musician, and an undeniable genius. He was arrogant, he didn’t always pay his bills, he experienced unspeakable tragedy, and he lived with another man’s wife. He was born in a small town in rural Wisconsin, made his home in that region for 50 years, and was arguably the greatest architect of the 20th century.

Now, 150 years after his birth, the state of Wisconsin is recognizing the many contributions of Frank Lloyd Wright by opening the Frank Lloyd Wright Trail. Marked by 146 road signs, it is a self-guided tour of nine significant Frank Lloyd Wright sites covering 200 miles from Racine to Milwaukee to Madison to Spring Green and finally on to his birthplace in Richland Center.

Follow along as I take you through the stops on Wisconsin’s Frank Lloyd Wright Trail. You’ll learn a little about each building, the man, and his approach to architecture along the way. 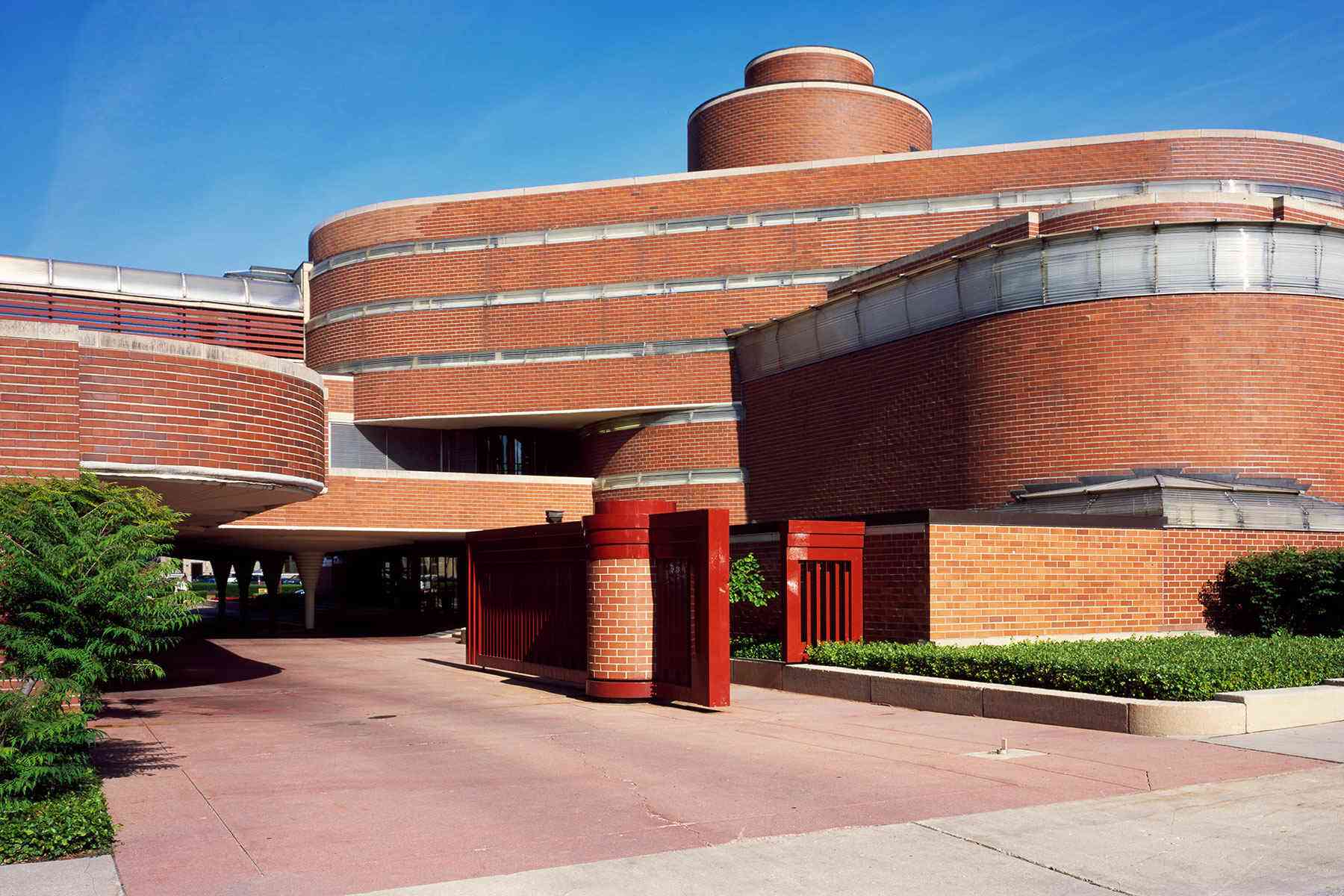 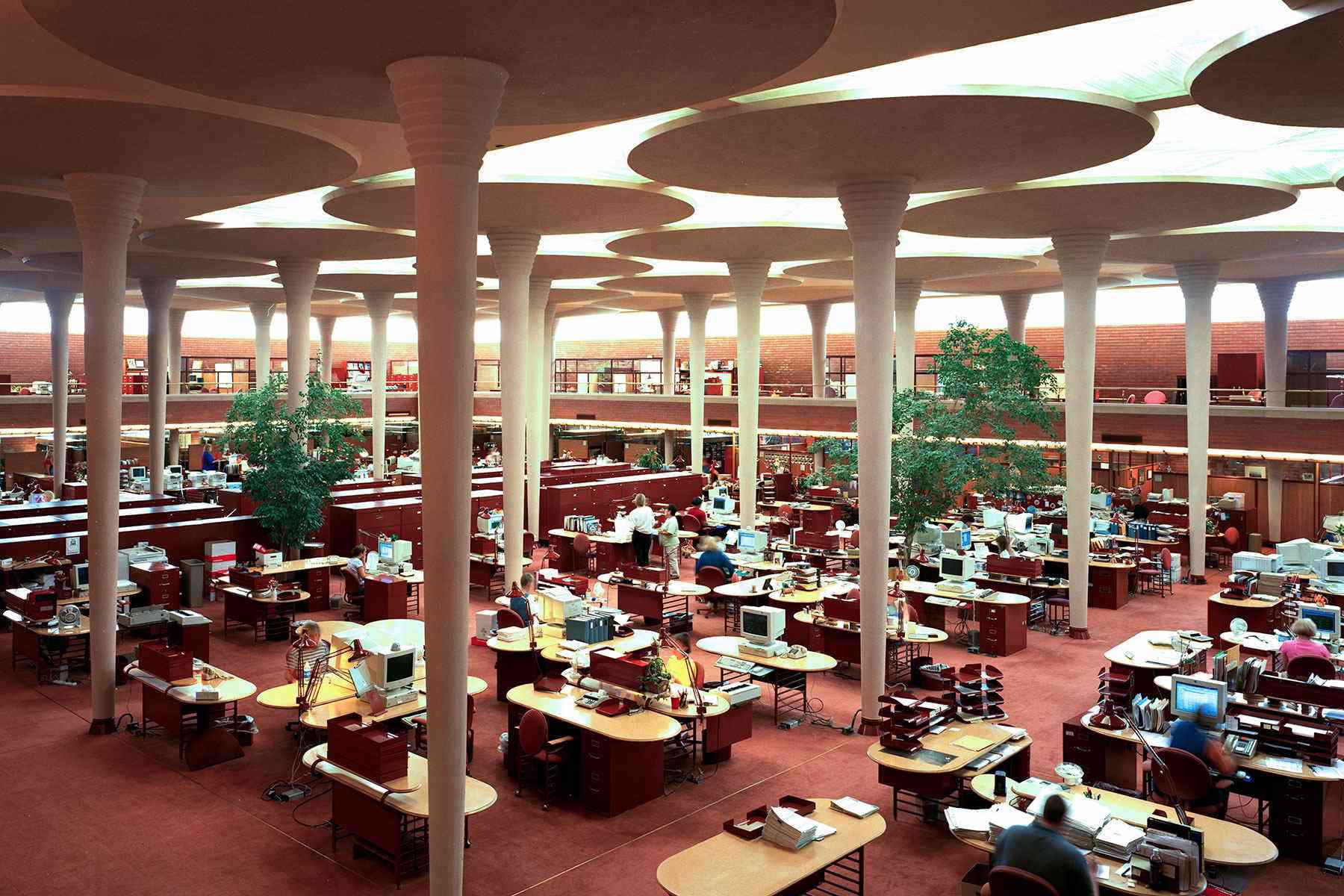 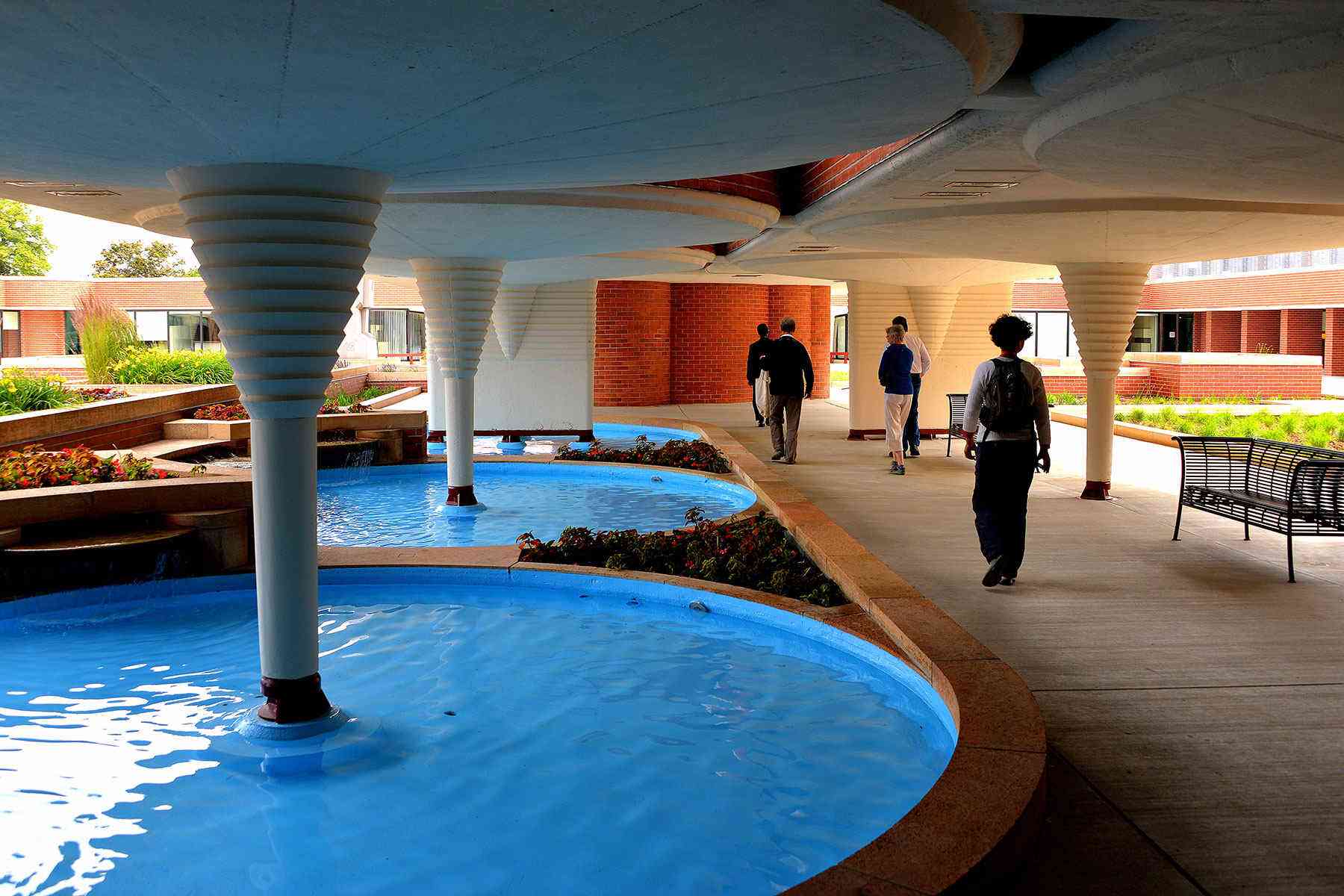 PHOTO: Keith Ewing/Flickr,
Previous Next
1 OF 9

Step into the SC Johnson Administration Building and you won’t know what year it is. The building was completed in 1939 but feels much more modern. And yet, it’s a charming throwback to a different era and is still used as an office building today. Wright designed everything from the exterior to the “dendriform” (tree-like) pillars to the office furniture. The central work area, called the Great Workroom, is a half-acre of open-plan workspace designed long before that was trendy. 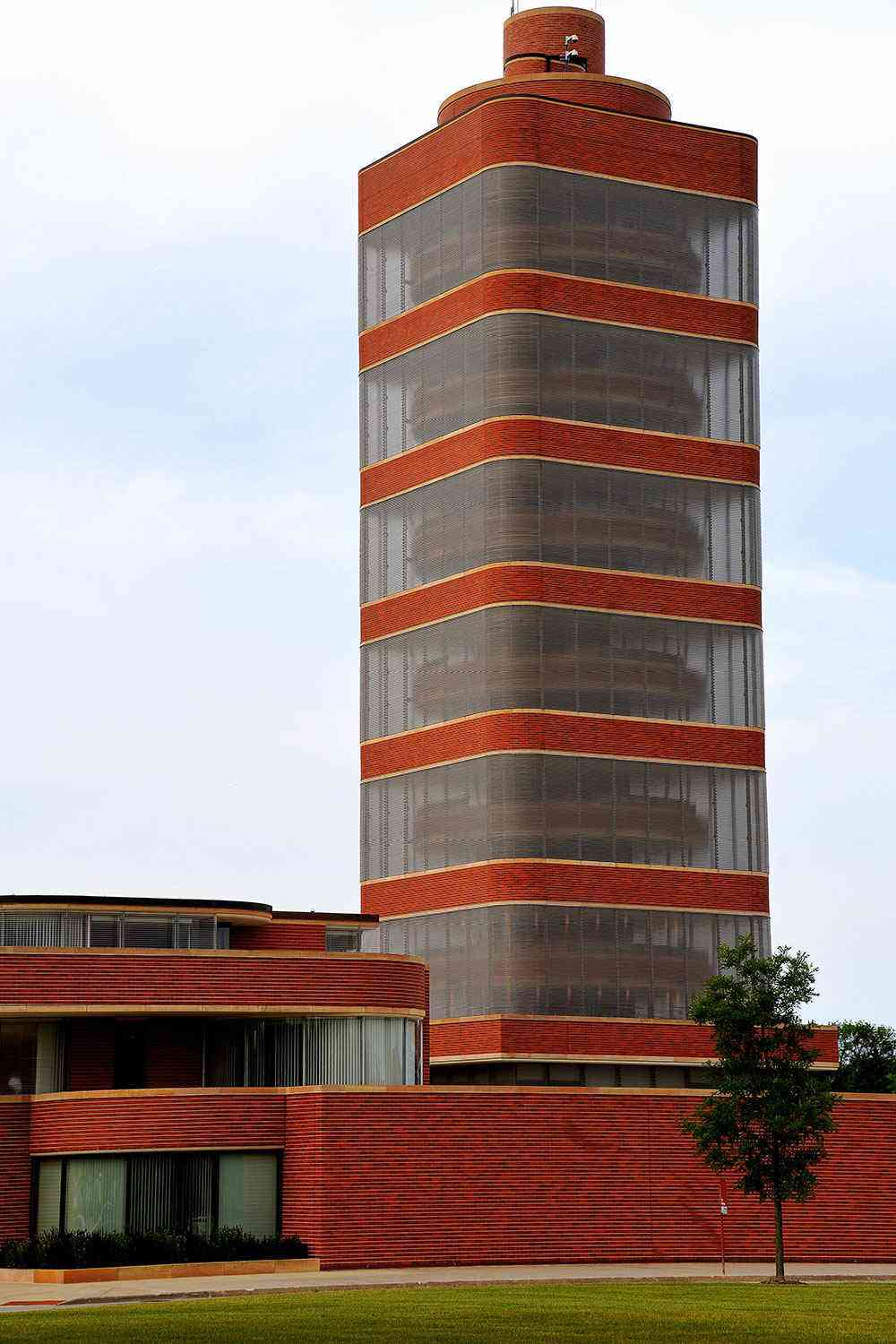 Completed in 1950, the nearby Research Tower gives you an appreciation for the breadth of Wright’s capability. Designed on a base that is only 13 feet in diameter, it opens up to 40 feet wide just a few feet above, rises 150 feet in the air, and extends 54 feet into the ground, making it one of the world’s tallest cantilevered buildings. It is guarded by a pair of statues of Winnebago tribe Native Americans, also of Wright’s design.

Wright viewed Racine as an ugly city, so he used thousands of Pyrex tubes in place of windows, perhaps a nod to the test tubes and Bunsen burners that would be used inside. As a result, the interior was too bright and all of the workers had to be issued sunglasses. Wright felt his design would inspire SC Johnson’s scientists. He was right. Within the first decade of its completion, Raid, Glade, Pledge, and Off! were invented in the tower.

While you’re at SC Johnson headquarters, be sure to visit Fortaleza Hall to see an exhibit honoring Wright’s 150th birthday. It includes replicas of furniture he designed, as well as 26 scale models of Wright homes built by retired architect Ron Olsen. 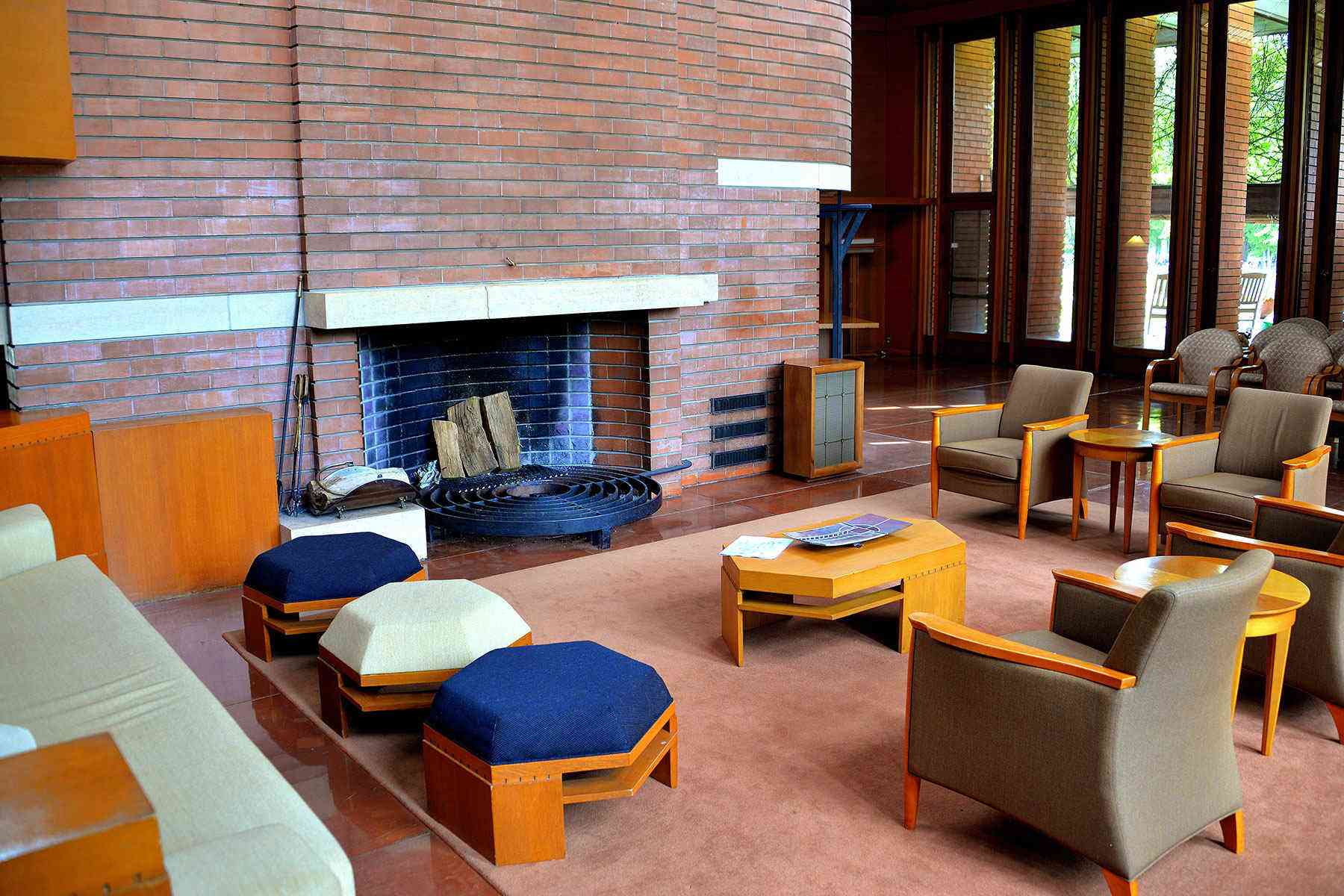 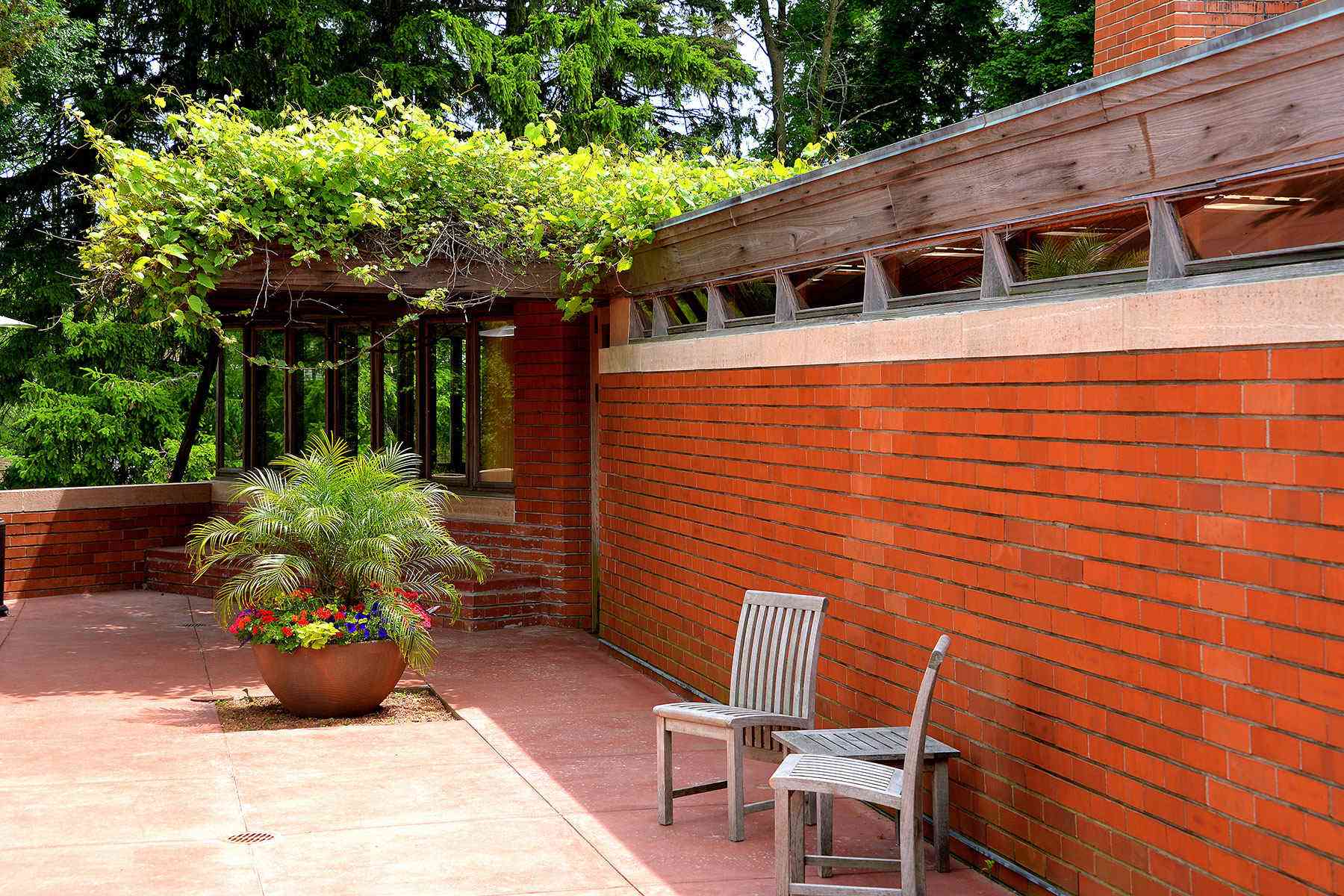 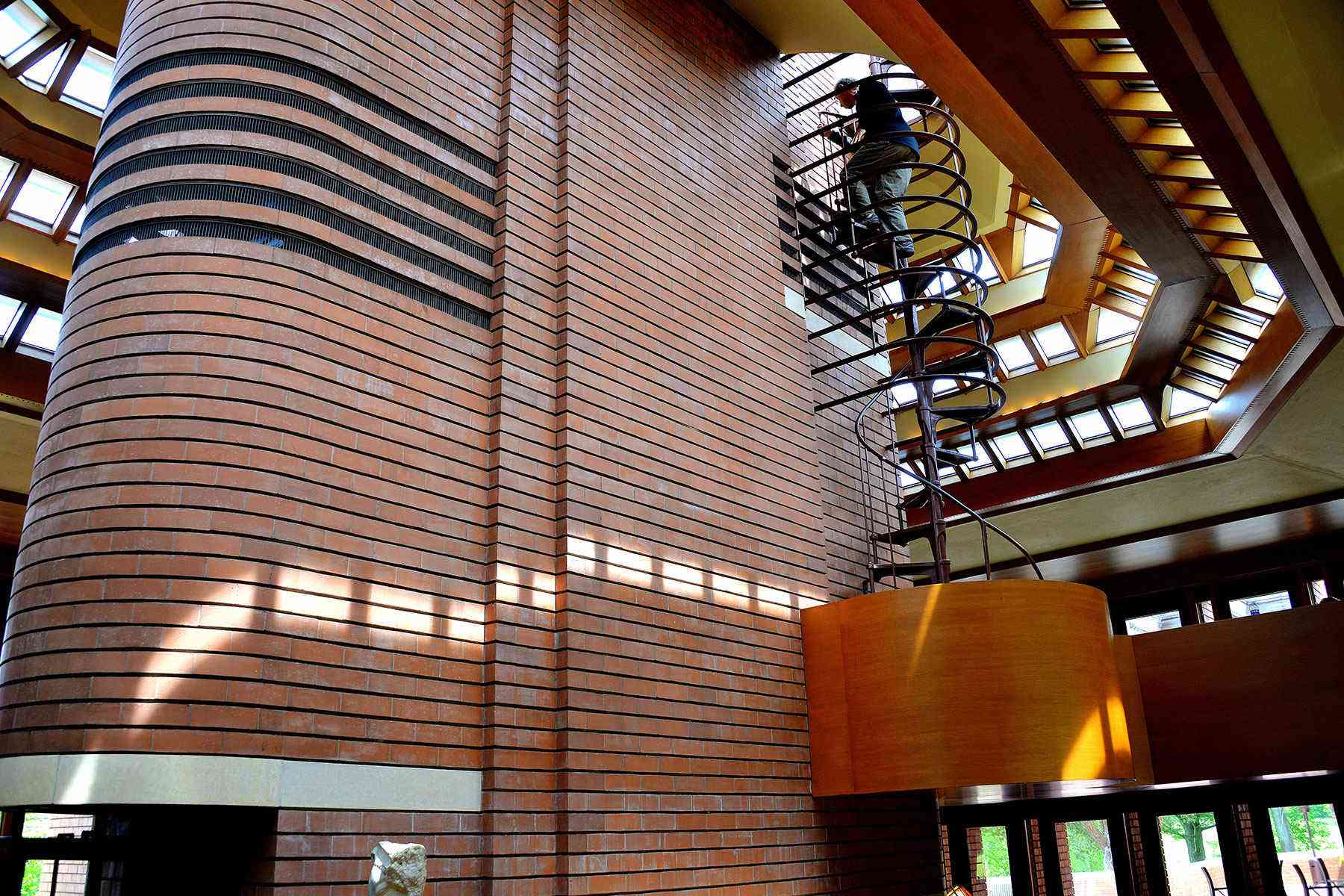 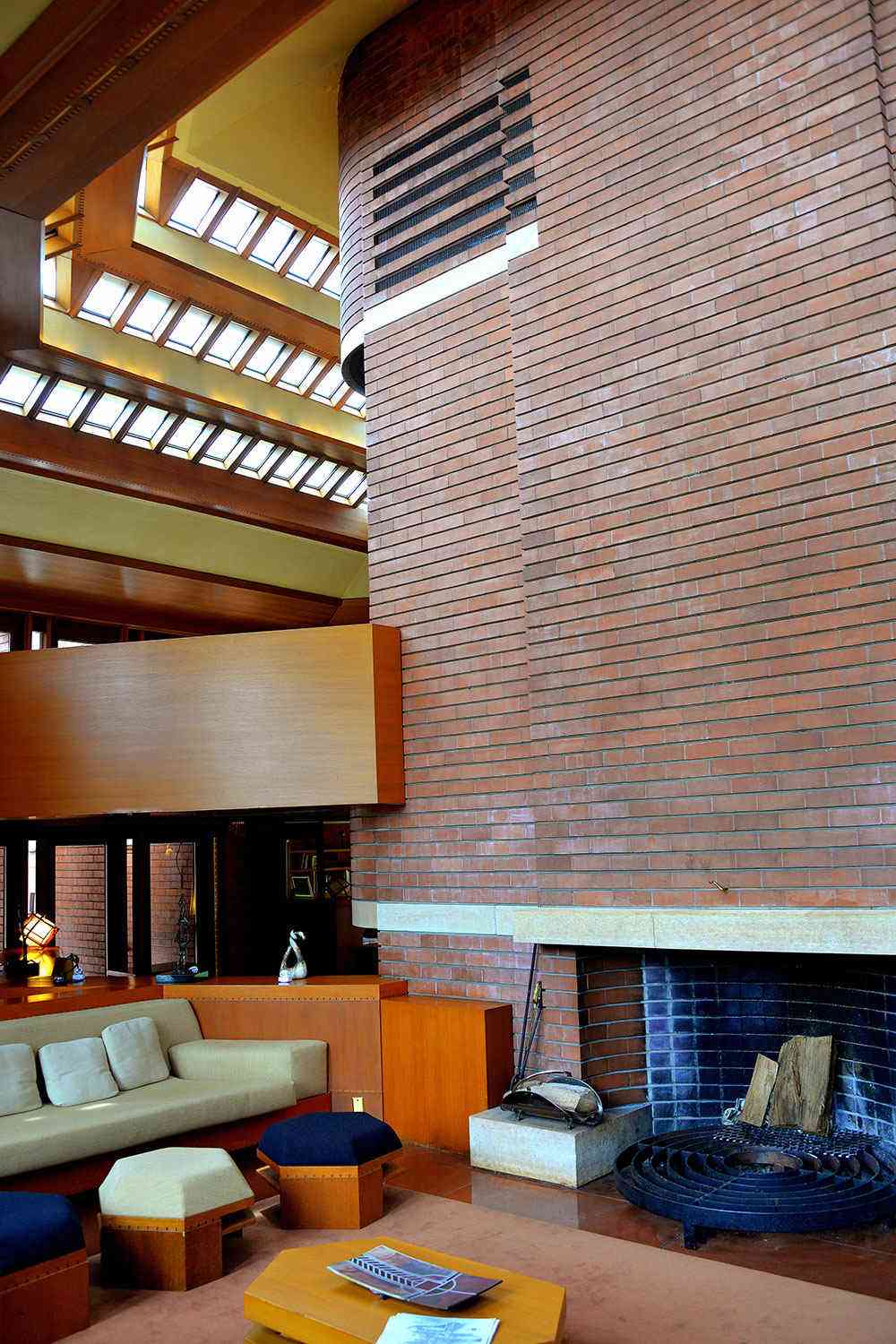 Just a few miles from SC Johnson headquarters is Wingspread, the home of third-generation CEO R.F. Johnson. Completed in 1939, it is viewed as one of the last of Wright’s Prairie School houses. The concept was actually Johnson’s, who noted that the Drake Hotel in Chicago had four wings. Wright ran with the idea, designing the 14,000-square-foot house in a cross with four wings around a central living room that features a 30-foot chimney and a central tower.  The house sits on 30 acres near Lake Michigan and, like other Prairie houses, blends into the land. Familiar materials are found here from other Wright houses: limestone, stucco, brick, and unstained wood. 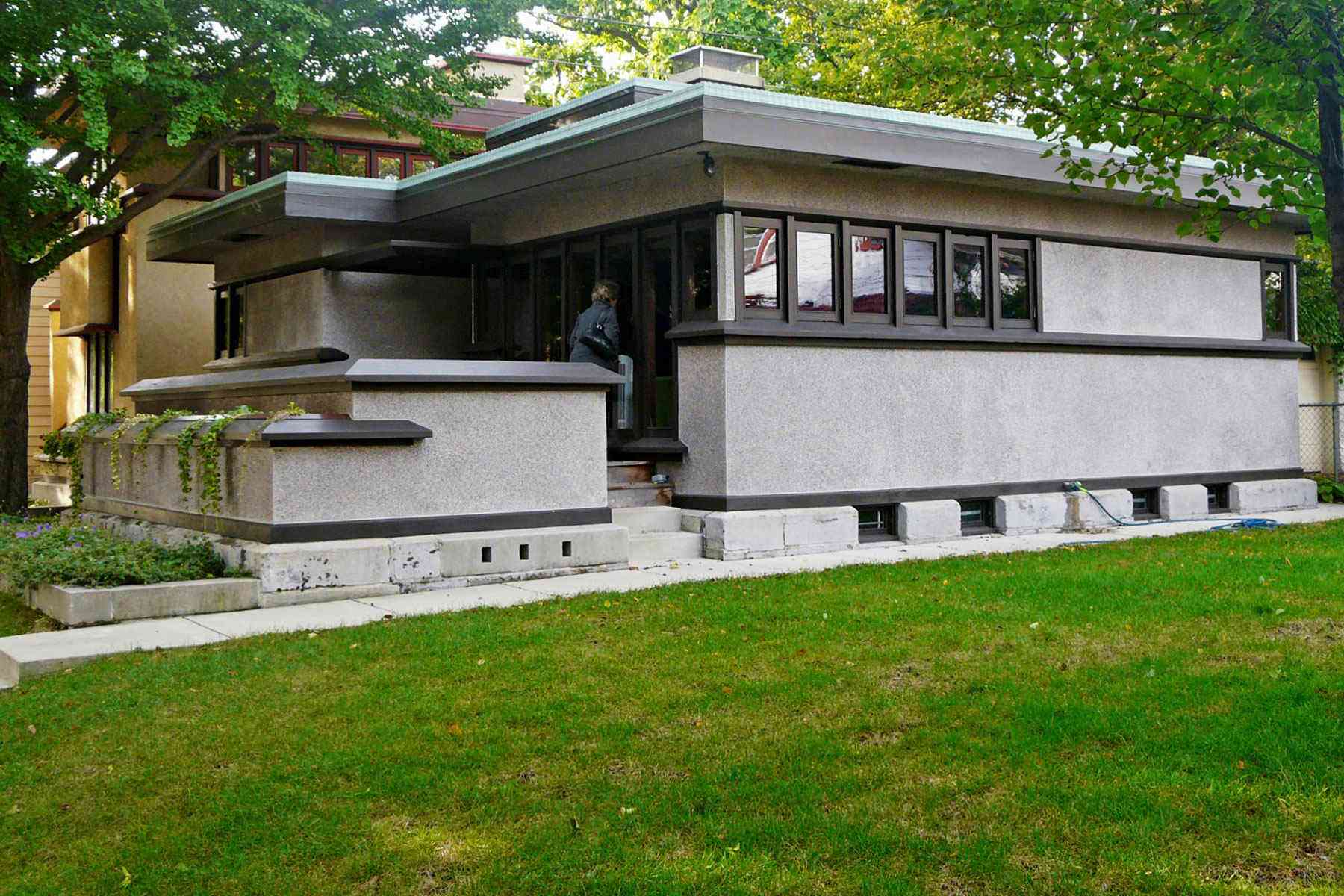 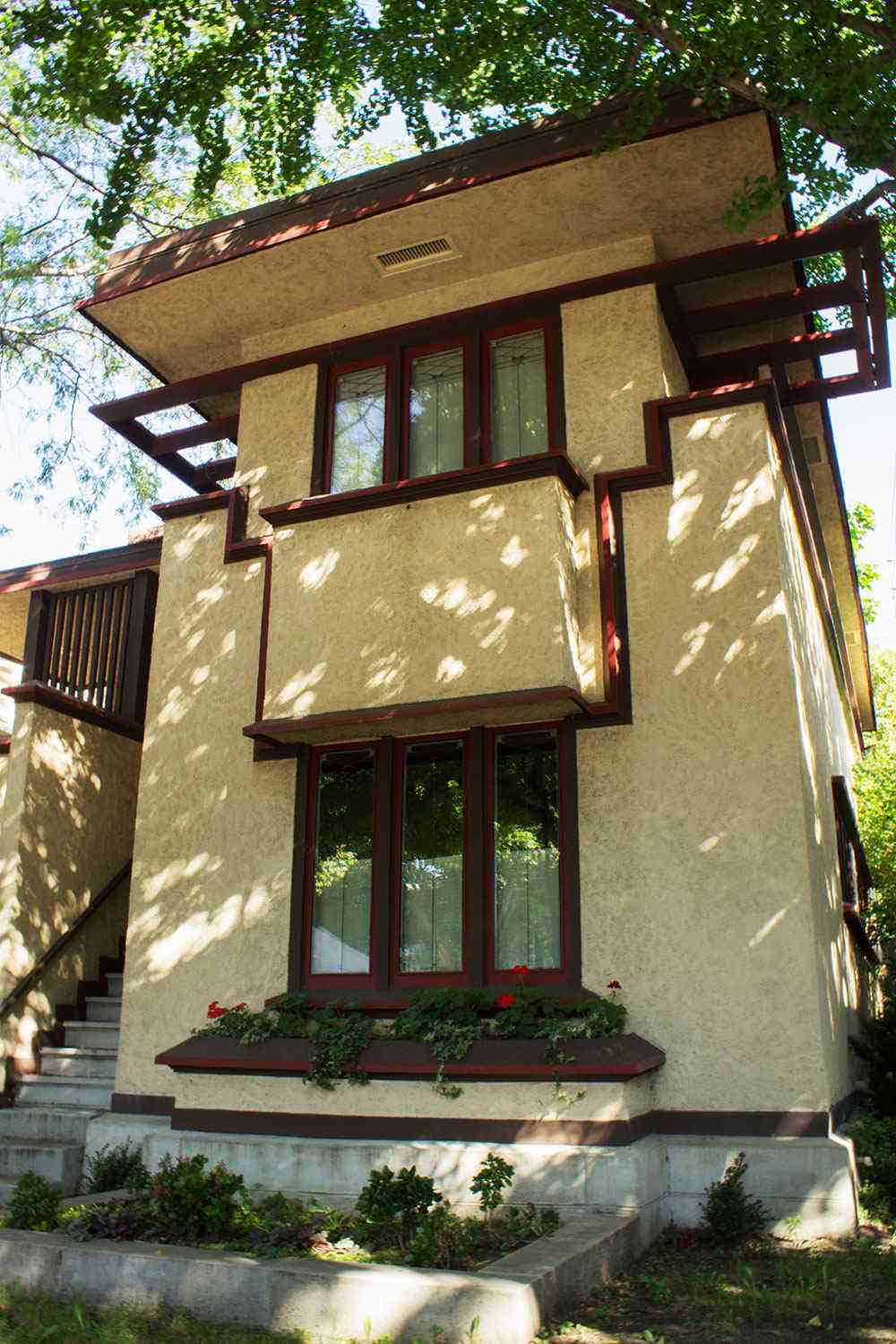 On the corner of Burnham Street and Layton Boulevard in Milwaukee sit a row of six Frank Lloyd Wright houses in an otherwise unremarkable neighborhood. These are six of perhaps 20 American System Built homes that Wright teamed up with The Thompson Company to build between 1915 and 1917. The idea was to create affordable housing that could be sold nationwide. Wright made some 960 drawings, and The Thompson Company opened a factory in Milwaukee to precut the lumber.

Wright in Wisconsin, a nonprofit, owns four of the six homes and gives tours of two of them. The single story unit is small, about 800 square feet, but it is completely restored to the way it might have looked when it sold for $3,000 back in 1915.

While you are in Milwaukee, also stop by the Wright-designed Annunciation Greek Orthodox Church. 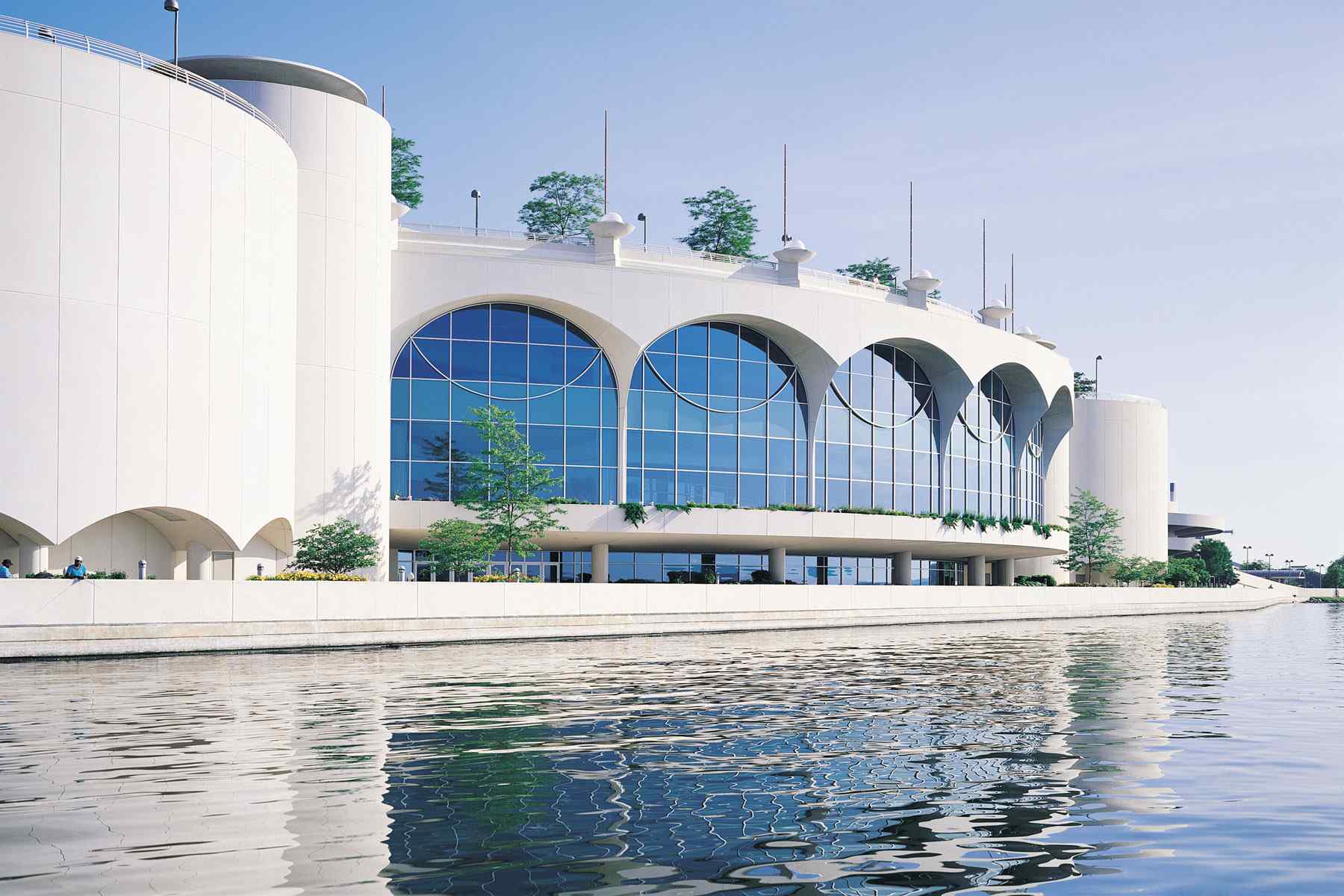 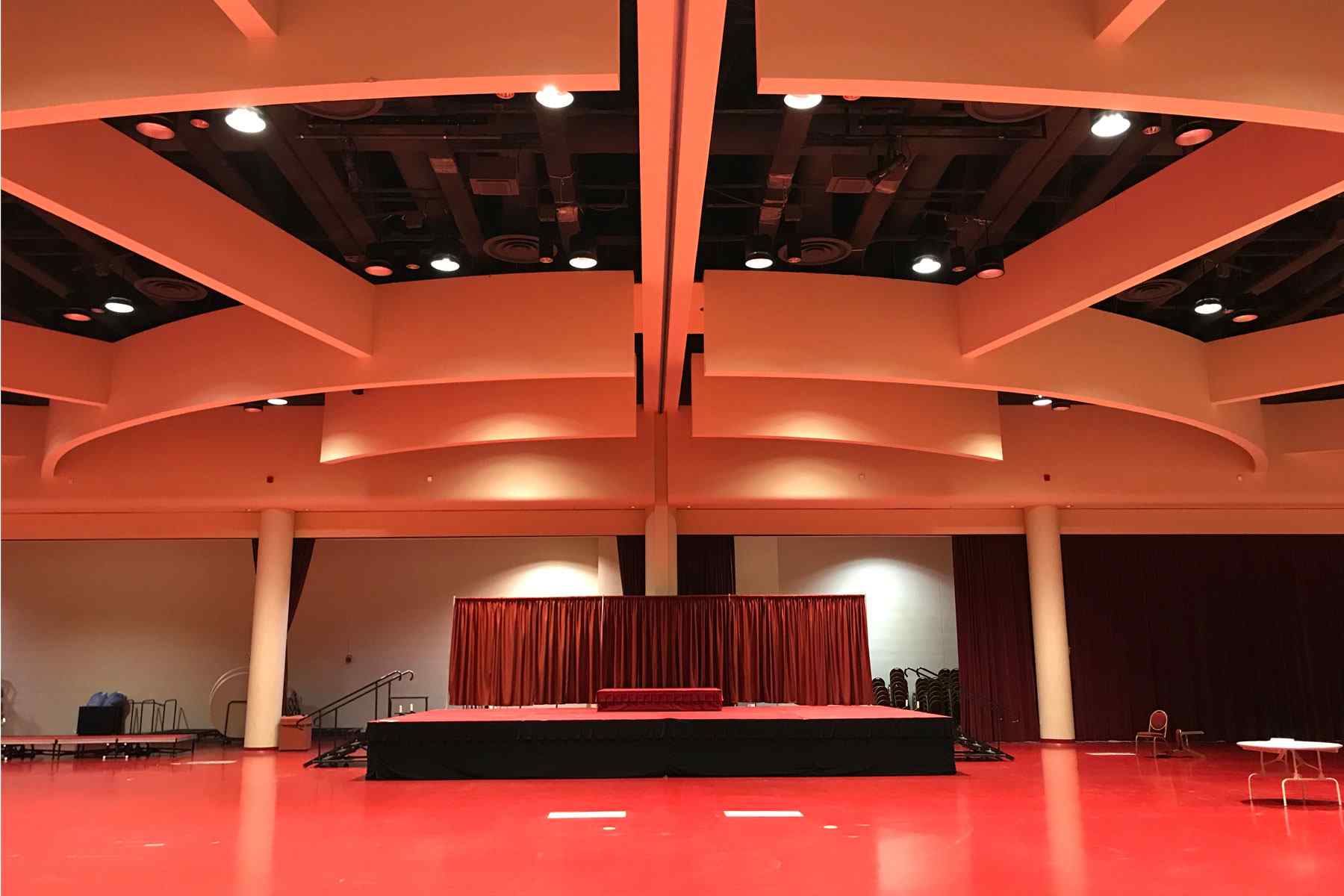 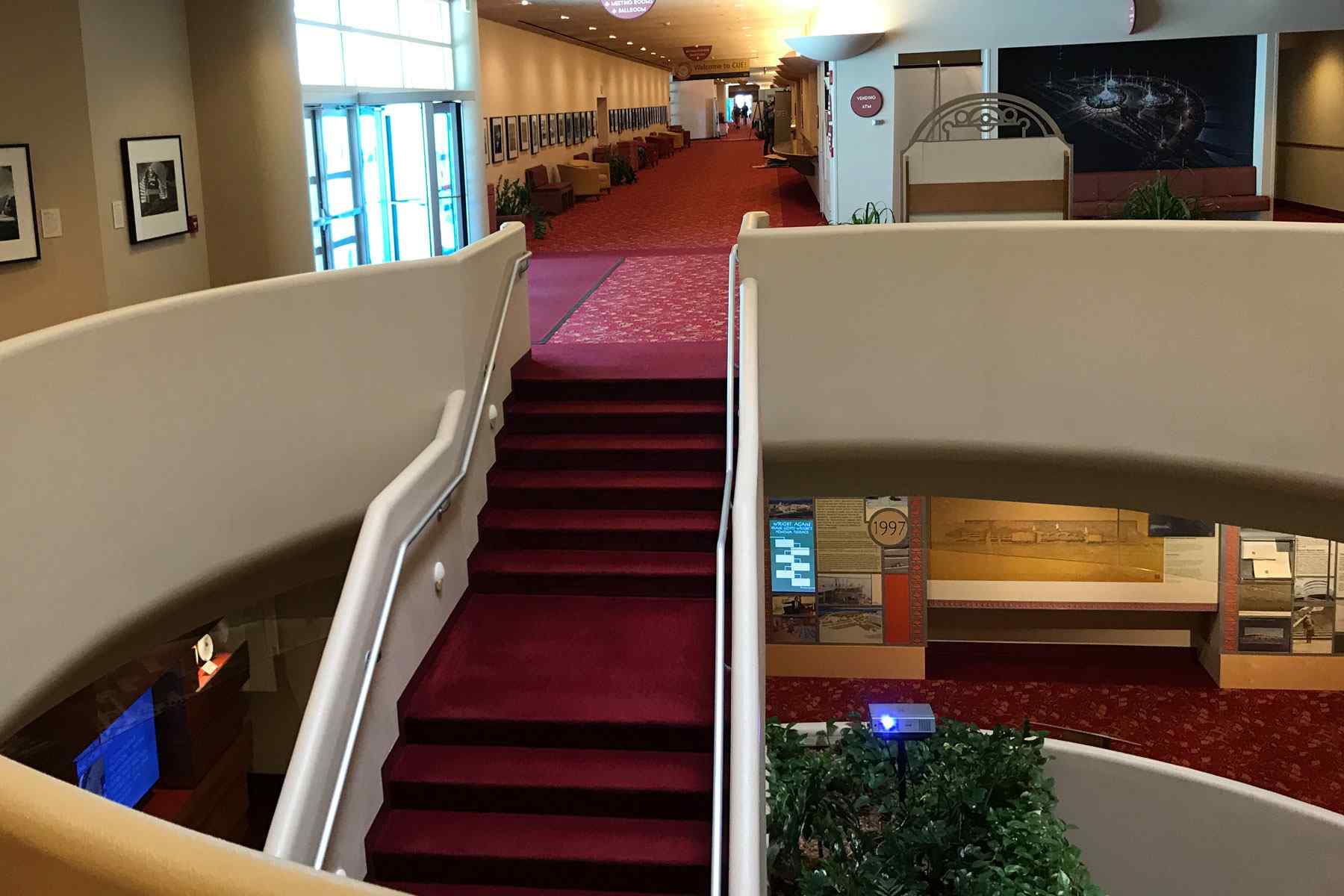 PHOTO: Kirk Bell
Previous Next
5 OF 9

Madison, the state’s capital, conceived of Monona Terrace in 1938 as a public structure to connect the capitol building with Lake Monona. It was originally intended to have a basketball stadium, a jail, a concert hall, and other public facilities. Local boy Wright, who had been on the cover of Time magazine that year heralded as the greatest architect of the era, wasn’t officially asked to design the structure, but a friend paid him $250 to do it anyway. While his design was accepted, the project became gummed up in local politics for the next 54 years. Wright revised the design until his death in 1959, and Wright disciple Tony Putnam revised the drawings in 1992 when the project was finally approved. Today, the building is a round, five-story, 250,000 square-foot community and convention center that extends 90 feet over the lake. The facility estimates that it has contributed more than $464 million in economic benefit to the local community since it opened in 1997. It seems all those years of debate only hurt Madison.

“This project I have planned would put Madison out in the front of progress where it belongs.”—Frank Lloyd Wright 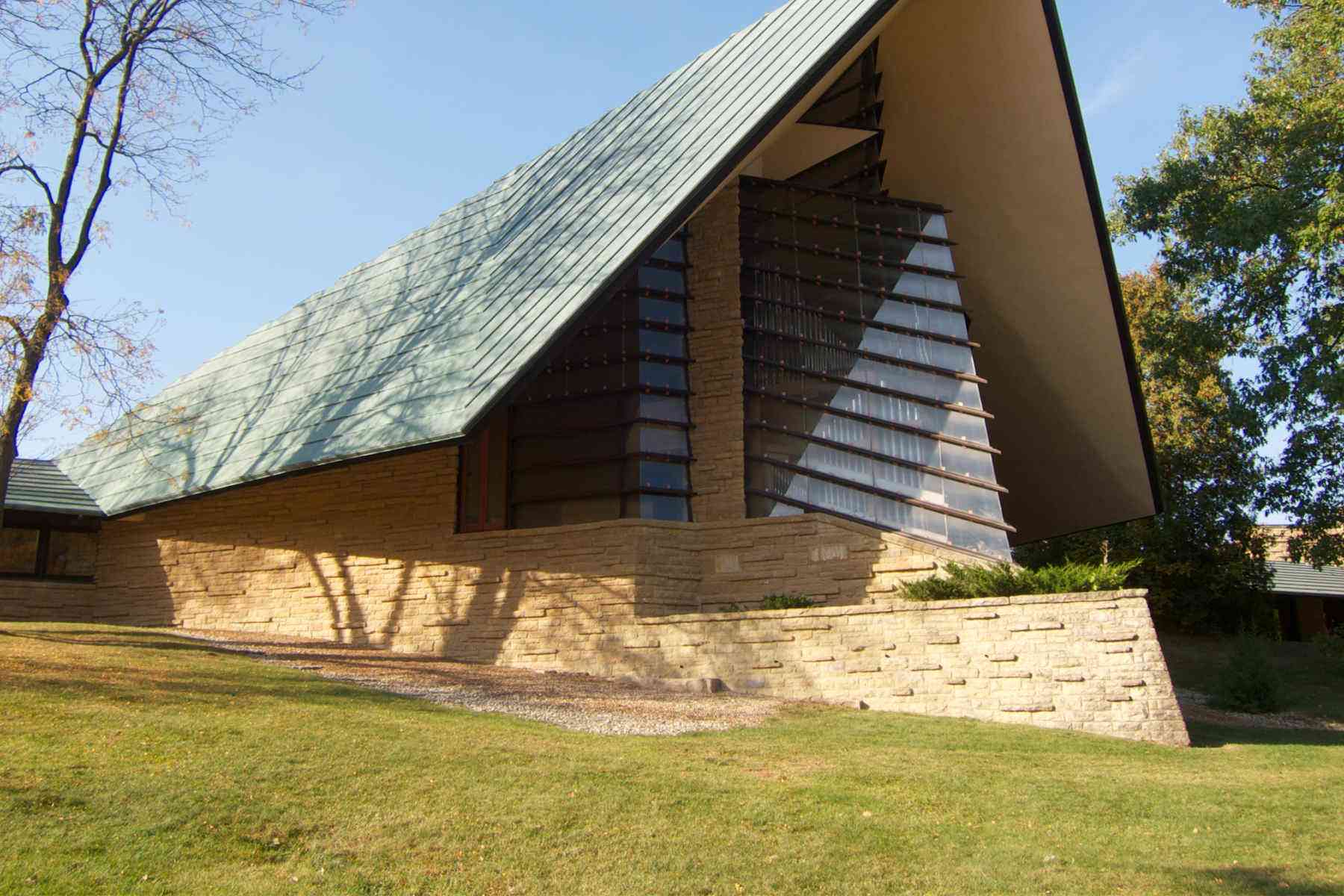 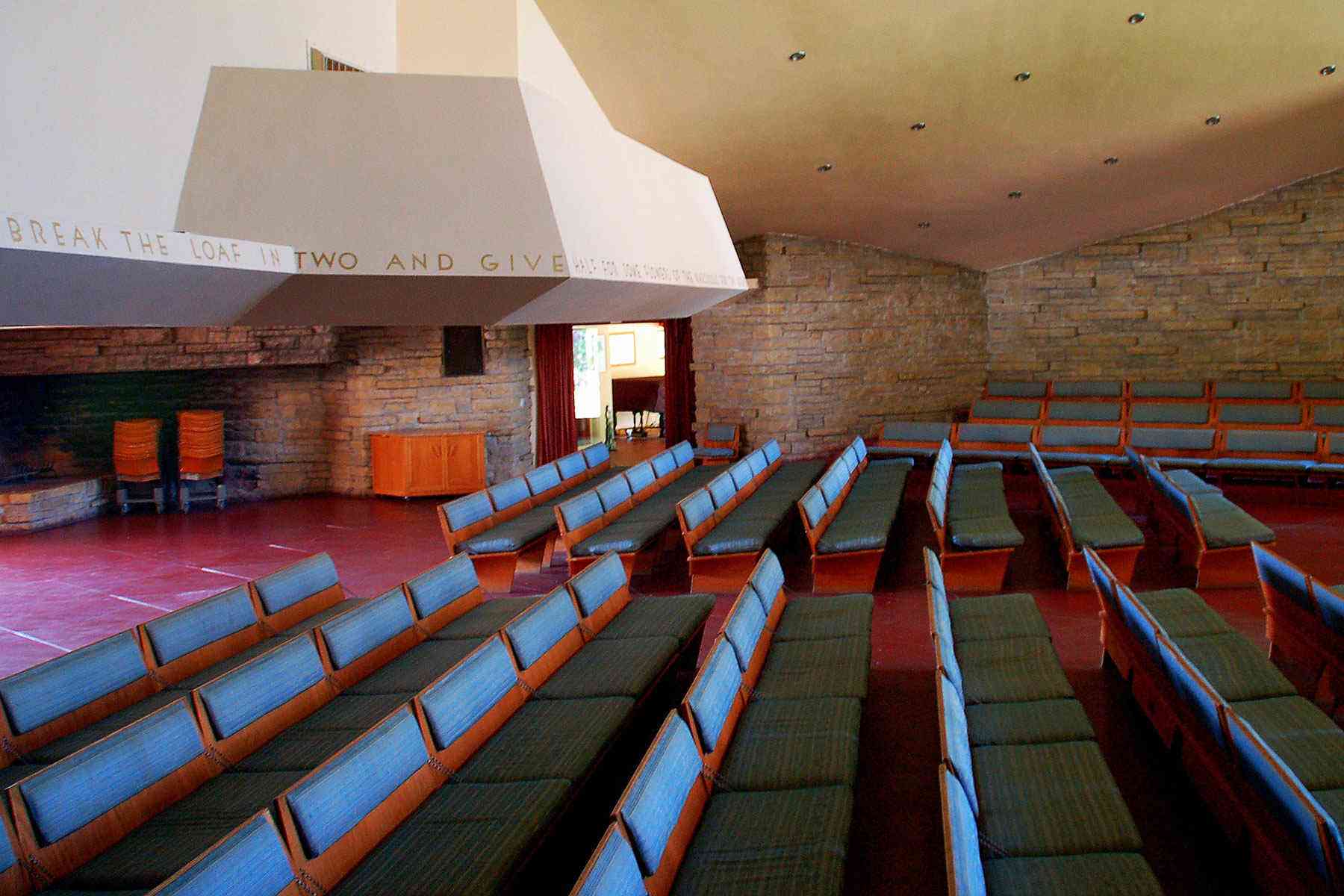 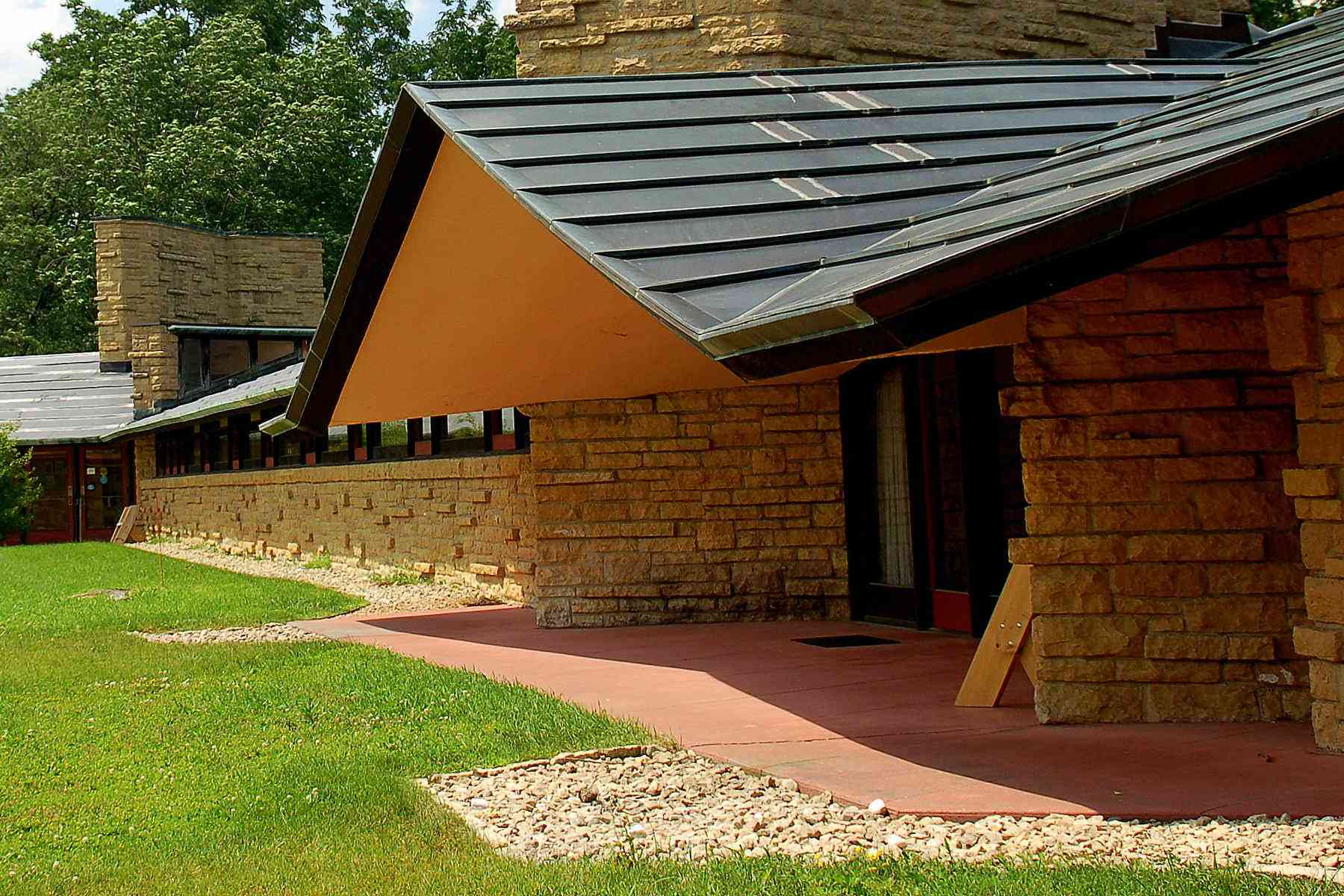 Frank Lloyd Wright was a Unitarian, and in 1948 his congregation asked him to design a new church. Like many of his projects, this one had cost overruns, but Wright, the contractor, and the congregation worked to keep costs down. The church was completed in 1951, and it looked like a plow emerging from the ground pointing toward the nearby lake. Eschewing traditional church design, Wright combined the sanctuary, hall, and tower in one space. He used triangle and trapezoid shapes throughout. Other Wright hallmarks are evident here: large overhangs that provide shade and entice people to move in or out, tall ceilings that provide a sense of occasion, use of local materials including Wisconsin sandstone, a hidden front door that makes visitors take in the whole structure, and Wright’s favorite Cherokee Red paint. 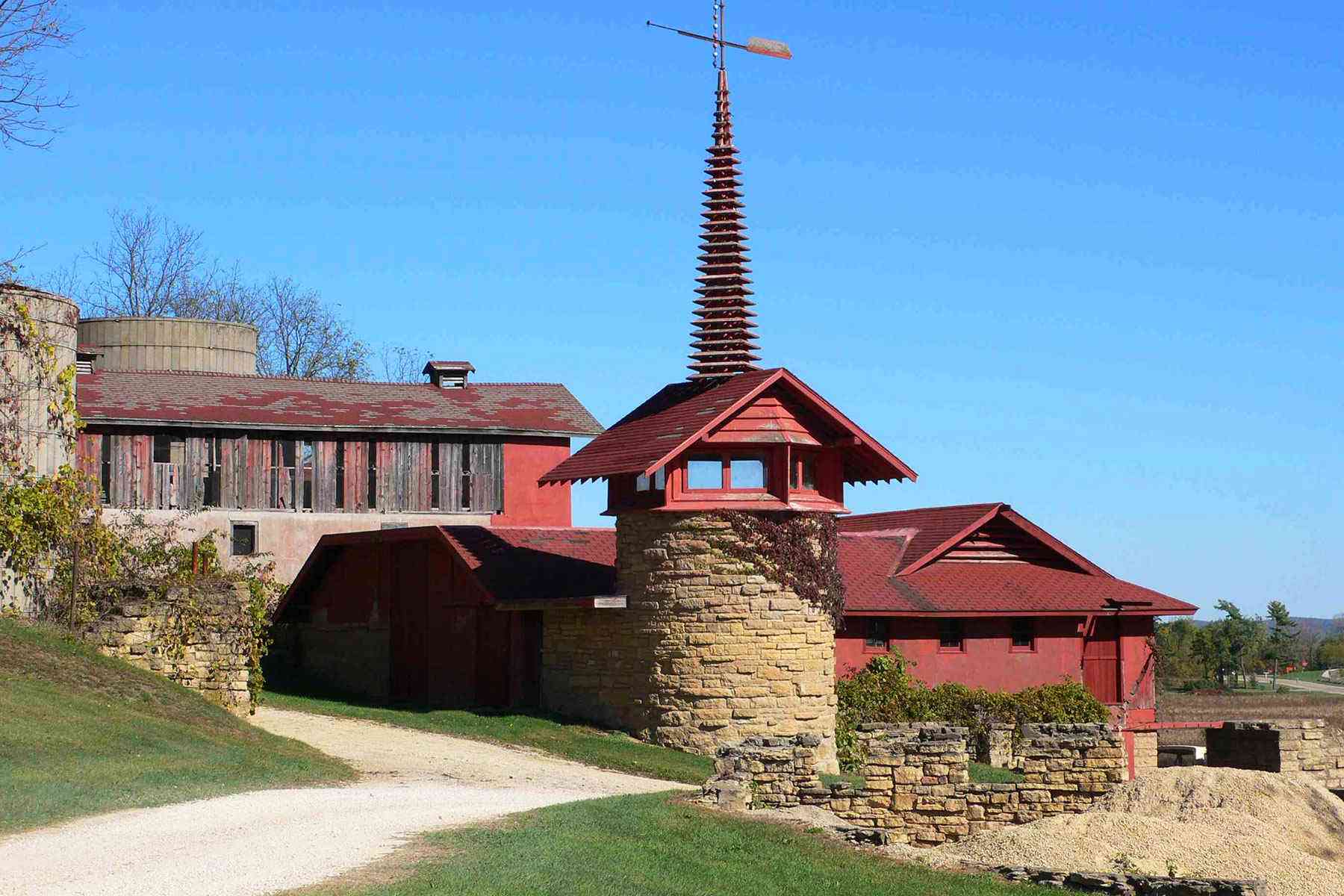 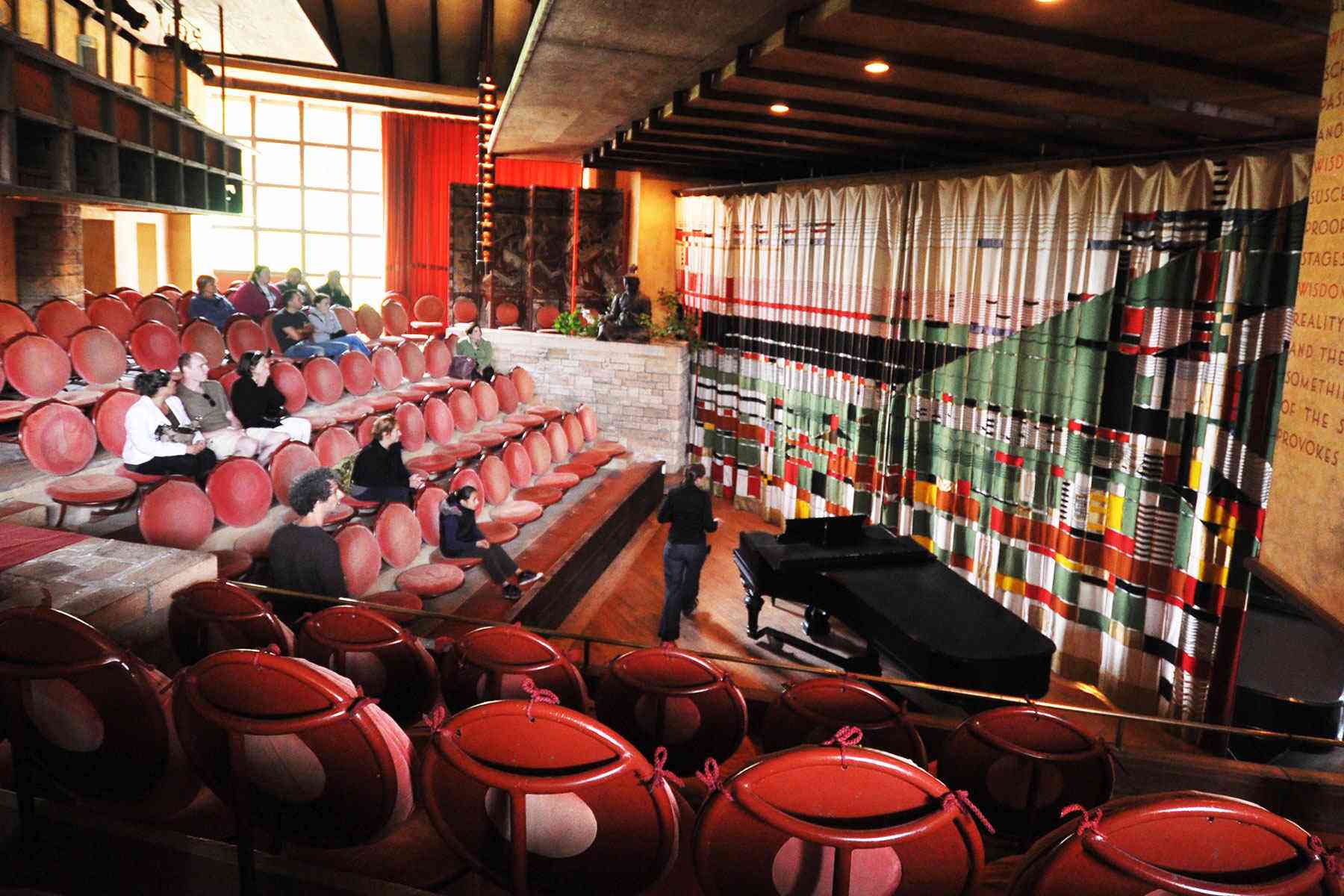 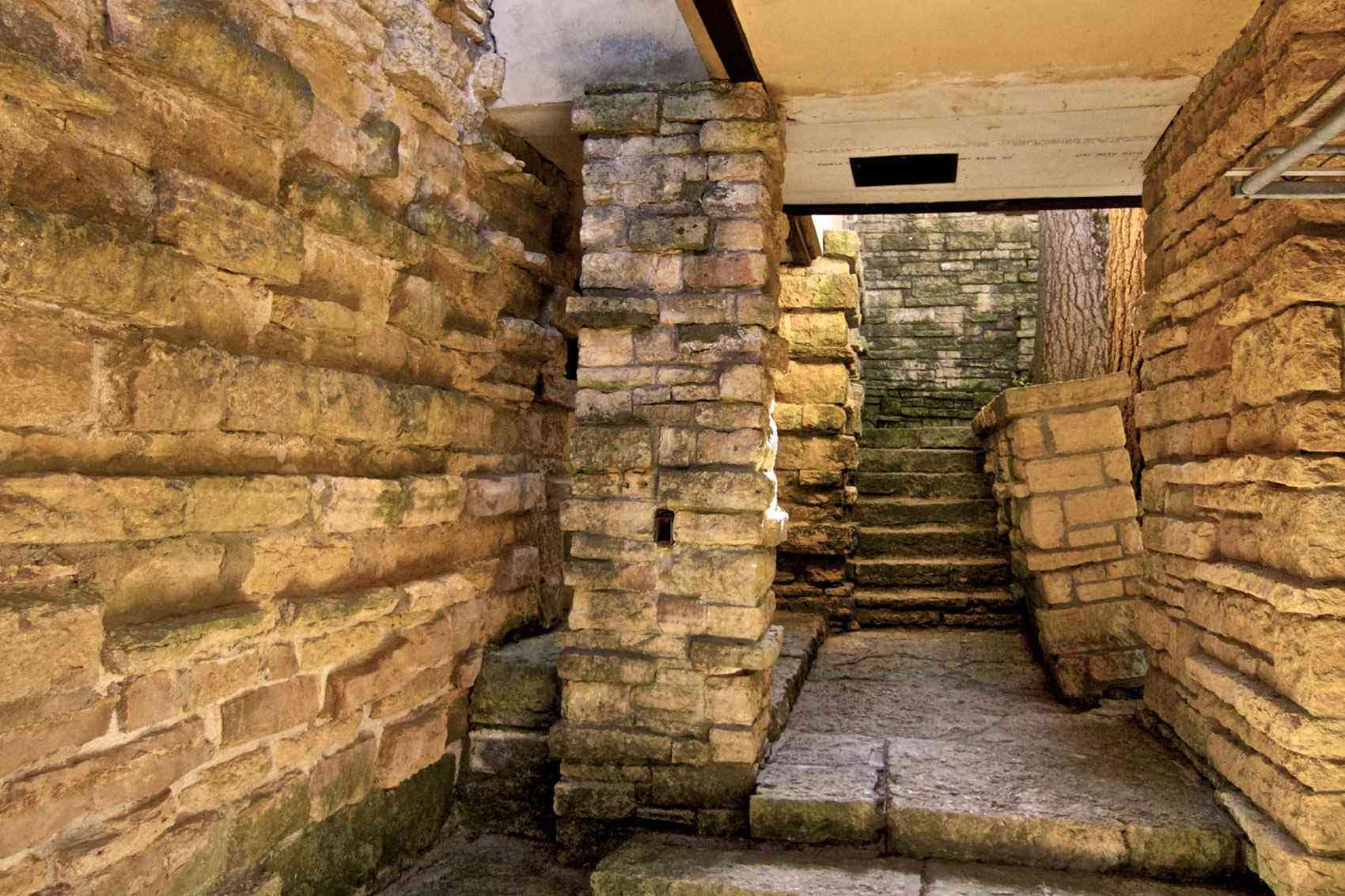 If you can make only one stop on the Frank Lloyd Wright Trail, Taliesin is it. It’s where you’ll learn the most about his life and his architecture. Set in Wisconsin’s Driftless region—the area that the glaciers missed—it’s nestled in the rolling hills of Spring Green. The 800-acre estate features seven buildings, including Wright’s home, his studio, the Hillside Home School, and the Frank Lloyd Wright Visitor Center.

Wright built Taliesin in 1911 after The Chicago Tribune discovered that he was having an affair with Mamah Borthwick Cheney, the wife of a former client. The couple retreated to Taliesin, which is Welsh for “Shining Brow,” even though both were married.

The home and studio tour is the highlight of the entire Frank Lloyd Wright Trail. Wright viewed his home and studio as a living laboratory. He experimented with styles and didn’t always care if the craftsmanship was top notch because he would probably change it soon anyway. It’s easy to see the way Wright liked to bring nature into his buildings in the studio. The home is a textbook case of how Wright liked to lead guests through his homes to take in his work. The living room, in particular, is extraordinary, with its view of the hills, exterior ring of seating, and central grand piano. Wright’s bedroom and workspace are in the back of the house, and it is where he did much of his work.

During the Depression, Wright reopened his aunts’ Hillside Home School children’s boarding school as an architectural school. His students not only learned architecture, but they also farmed the land, cooked the meals, did the chores, and built his buildings. The Hillside Home School is a self-contained university, where 20 or so students live and work. Though they live almost like monks studio has all the state-of-the-art computer equipment that today’s architects use. Next to it is the theater, where Wright and his family would take in shows on Saturday nights. 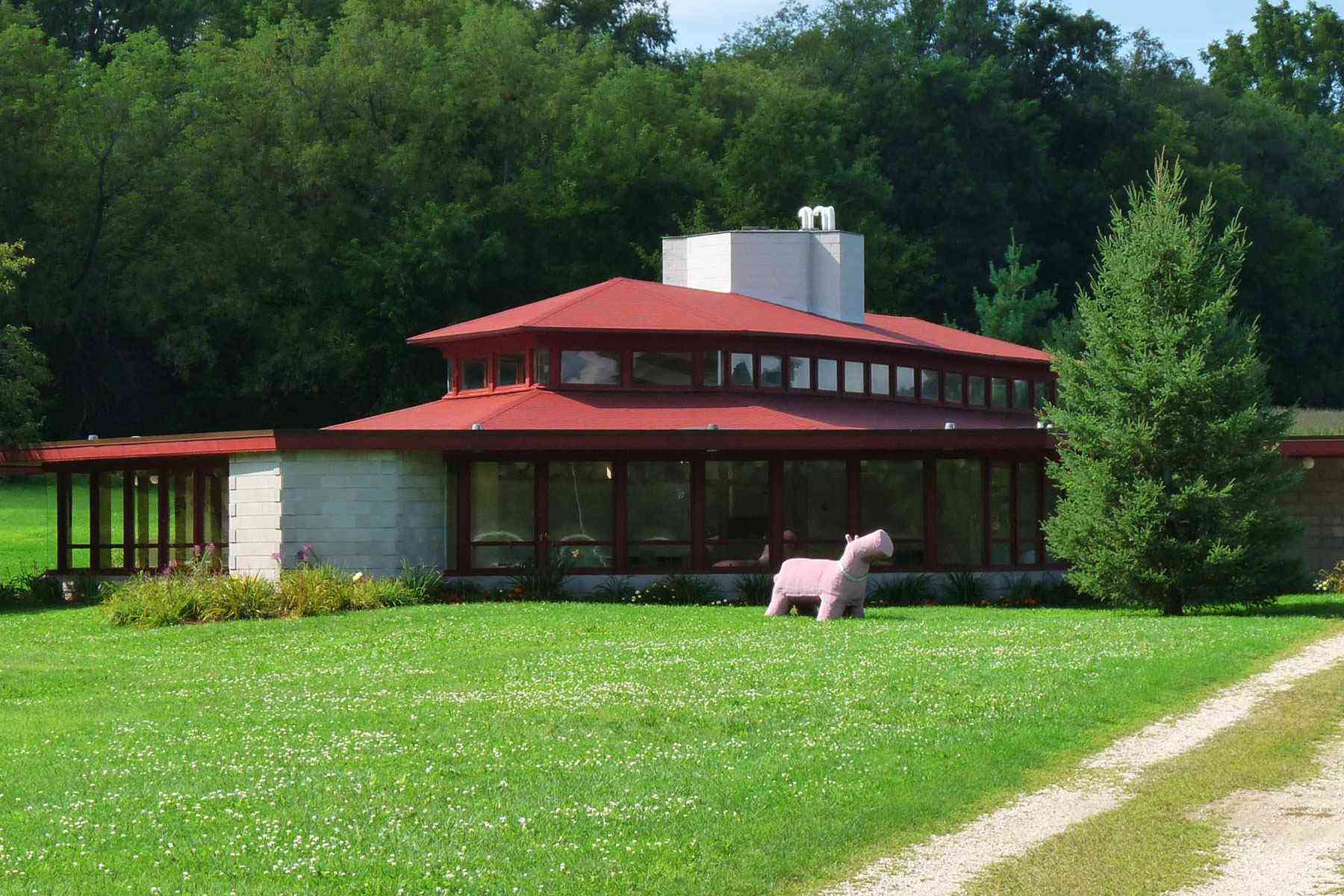 Frank Lloyd Wright may have upset people in Spring Green with his frugal ways and a tax dispute, but he made amends to the community by not only designing a schoolhouse but also paying for some of it. Perhaps he was getting soft in his later years, or maybe it was a love for education, but Wright designed the school in 1956 while working on a much bigger project—the Guggenheim. He based the design on a children’s playhouse he had conceived for the Chicago suburbs years earlier. The design is symmetrical side to side, has 5-foot overhangs with decorative tooth-like “dentils,” rises 17 feet high on the inside, and features mitered windows.

The concrete structure opened as a school in 1958, consolidating six different schools into one, and the kids arrived via two station wagons. It lasted as a school until the late 1980s, and today it serves as a cultural arts center with workshops in architecture, music, science, and painting.

“He built buildings that were far ahead of the materials.”—Mary Pohlman, Wyoming Valley School, Inc. 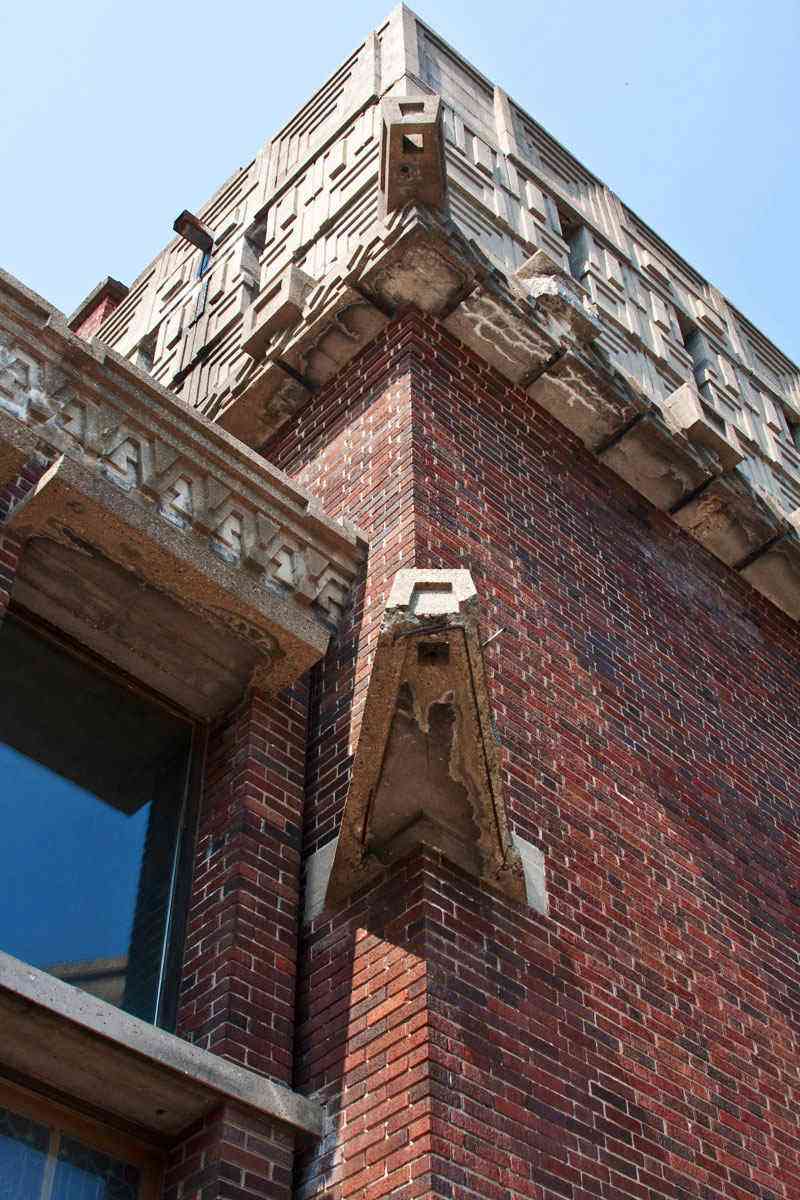 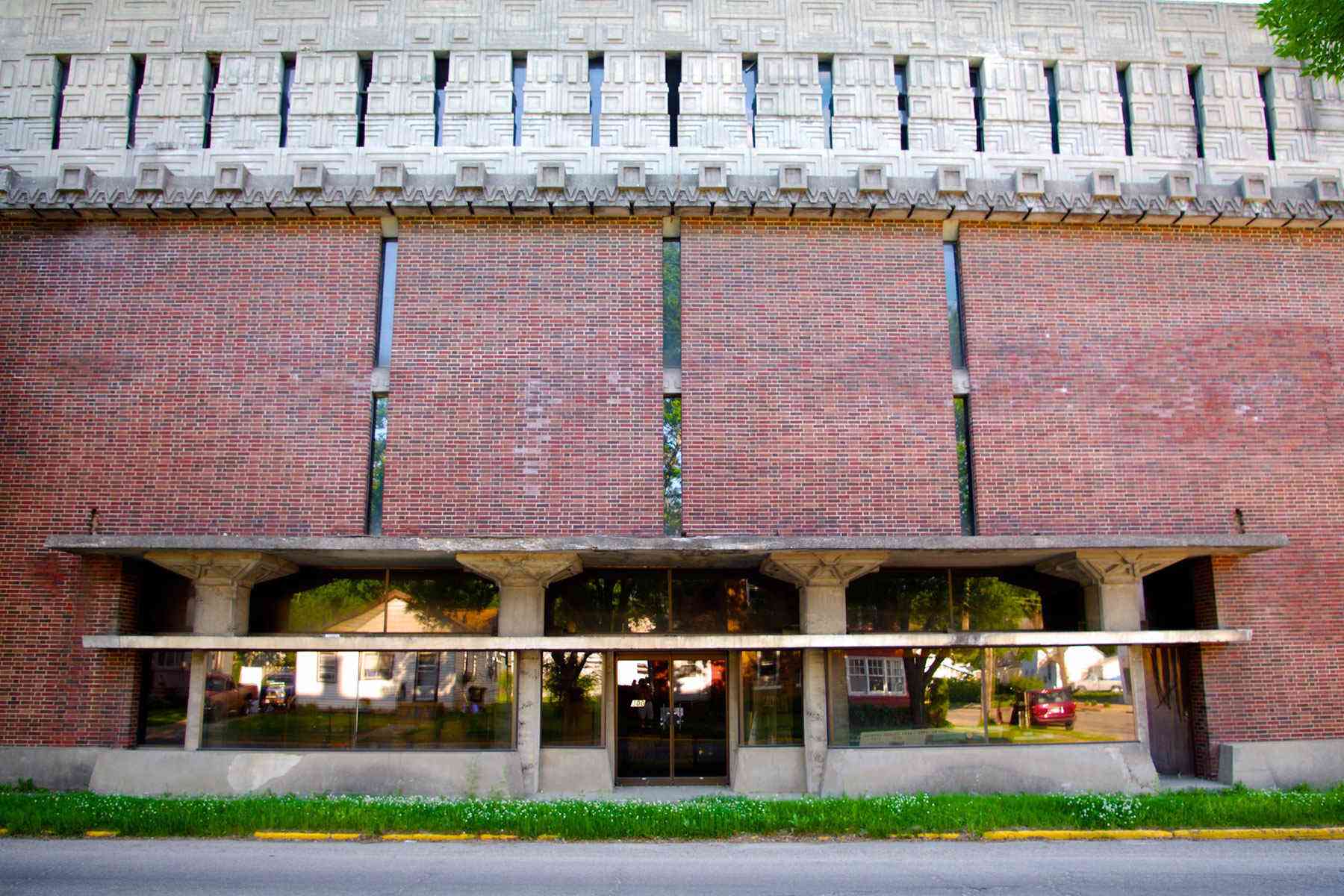 PHOTO: Nomadseifer via Wikimedia Commons, [CC BY-SA 3.0]
Previous Next
9 OF 9

The last stop on the tour is in Wright’s birthplace, Richland Center. The story of this building is the story of unfulfilled promise. Wright designed it in 1915 for fellow Welshman Albert D. German for use as a wholesale grocery warehouse. The construction process included a cork base, stylized reinforced concrete pillars placed 16 feet apart, yellow and red brick, and a frieze along the top that was created with wood molds. Construction was completed in 1917, though the building never received a proper roof, and German’s plans for a teahouse, shops, and other businesses never materialized.

Today, the building is in a state of disrepair after being neglected by a previous owner for more than 30 years. The current owner, the A.D. German Warehouse Conservancy, Inc., wants to make it a multi-purpose building once again, to serve as a tourist spot, a meeting place for local artists and foodies, and a facility for events.

The most efficient way to take the Frank Lloyd Wright Trail is to start in Racine, drive up to Milwaukee, head over to Madison, visit Spring Green, and then finish up in Richland Center. The realities of tour times make that hard to accomplish, and my tour covered 451 miles due to some backtracking. To piece together your own trip, download the Frank Lloyd Wright Trail app or visit Travel Wisconsin.