In the western U.S. and Canada, grand parks inspire all of us to explore our national treasures. Instead of pitching a tent and roughing it, consider splurging on a stay at a traditional park lodge where you’ll be surrounded by history, nature, and even some luxury. From Yellowstone to Yosemite, Bryce to Banff, and Grand Canyon to Glacier, here are our eight top picks for national park lodges in the west—plus a few notable runners-up. After you get inspired by these images, see more tips to PLAN YOUR TRIP with our National Park Lodge Basics & Reservation Realities.

Shock and awe may best describe the reaction of people entering the lobby of Old Faithful Inn in Yellowstone Park. Its 76-foot high lobby has four levels of balconies with supports created with gnarled branches from a tangle of trees reaching the ceiling. Construction costs of $140,000 were financed by the Northern Pacific Railroad and the Yellowstone Park Association. Wings were added to the hotel in 1915 and 1927—it would be difficult to duplicate the inn’s construction today, since cutting down trees, gathering wood, and quarrying rock inside the park are now illegal. The park’s most famous geyser, Old Faithful is less than 100 yards from the inn. Approximate times for its eruptions are posted in the lobby. Note: Inn is undergoing renovation work summer 2012 which could impact some guest areas. See site for details. See Fodor's full review. 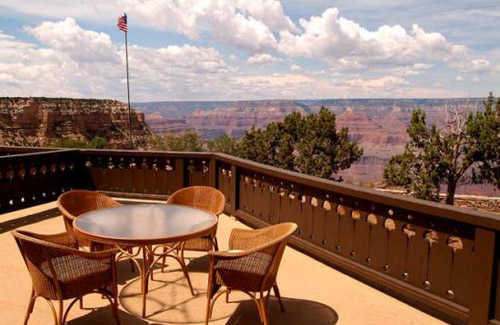 In the Grand Canyon, Arizona has a natural wonder, which, so far as I know, is in kind unparalleled throughout the rest of the world," said Teddy Roosevelt in 1903, speaking from the area where the El Tovar would open two years later. "What you can do is to keep it for your children, your children’s children, and for all who come after you, as one of the great sights which every American if he can travel at all should see." Set atop the South Rim of the Grand Canyon, El Tovar so blends into the landscape, with its stone, wood, and earthy tones, that it looks almost like another tier of the multilayered, multihued canyon. With the elegance of a European villa and warm atmosphere of a rustic log cabin, it is arguably the most luxurious of the lodges. Opened in 1905, El Tovar was named for Spanish explorer Don Pedro de Tobar (the "b" was changed to "v" to avoid people saying "to the bar") and was designed by architect Charles Whittlesey. Built for $250,000, it had 95 rooms, electricity, indoor plumbing, steam heat, solariums, and lounges. Originally, Jersey cows and poultry grazed on site, and greenhouses provided fresh herbs and flowers for guests feasting in the dining room. One of its most famous diners and overnight guests was Teddy Roosevelt, who came to dinner in muddy boots and dusty riding gear—or so says local lore. In addition to Roosevelt, seven other presidents have stayed here. For its 100th birthday, the hotel received a $4.6 million restoration. See Fodor's Full Review. 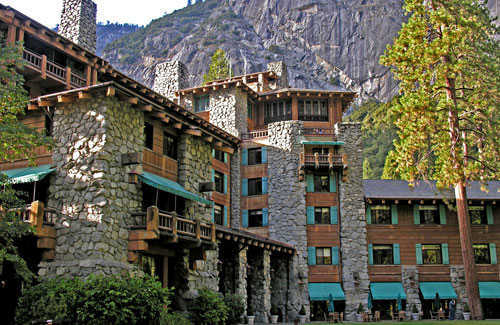 Blending into a backdrop of granite cliffs, the elegant Ahwahnee Lodge, which opened in 1927, is six stories tall with three wings in a "Y" layout. Then- NPS Director Stephen Mather believed that attracting wealthy, influential folks into Yosemite would lend support and congressional funding to the national parks system. Architect Gilbert Stanley Underwood was commissioned to build a firstclass fireproof hotel that blended in with the landscape. In order to resist fire, concrete was formed within timbers and then dyed to resemble redwood. The motifs and patterns found in the basketry of the local Indian tribes were used on the ceiling beams, stained-glass windows, and concrete floors. Luminaries who have signed the lodge guest book include Franklin and Eleanor Roosevelt, John F. Kennedy, Queen Elizabeth, and Clark Gable. See Fodor's full review. 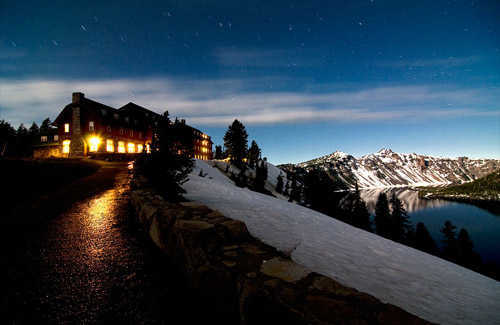 When Crater Lake Lodge opened in 1915, it was anything but grand: the exterior was covered in tarpaper, fiberboard separated the guest rooms, bathrooms were shared, and the electricity seldom worked. But visitors loved it anyway because of the lake view. Due to its structural defects, the $30,000 building was closed to the public in 1989. Public admiration swayed Congress to grant $15 million for renovations, and the lodge was completely rebuilt and reopened in May 1995. Perched on the rim of a defunct caldera filled with cobalt blue water, the lodge has a fantastic deck, as well as an architectural trademark, a massive stone fireplace. See Fodor's full review. 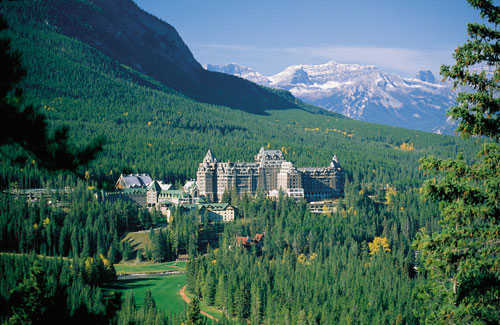 Fairmont Banff Springs, a mile walk from downtown Banff, is styled after a Scottish baronial castle and is much more regal than the American national park lodges. Combining the best of the past with the amenities sought by modern-day travelers, the hotel offers tennis, golf, bowling, horseback rides, indoor and outdoor swimming, and one of the largest spas in Canada. See Fodor's full review. 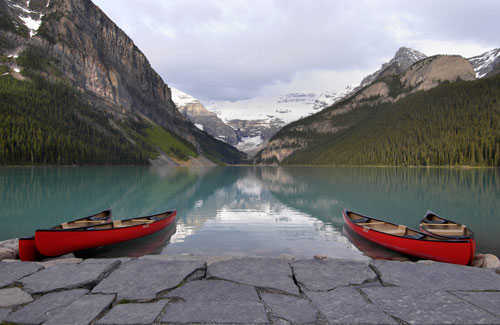 In the late 1800s, William Cornelius Van Horne, general manager of the Canadian Pacific Railway, said, "Since we can’t export the scenery, we will have to import the tourists." And so they did. The railroad developed Fairmont Banff Springs Hotel and the Fairmont Chateau Lake Louise, both of which opened their doors in 1890. While the great lodges of America’s national parks have a comfortable hunting-lodge aura, Canada’s Banff and Lake Louise accommodations have a stately, opulent ambience. Surrounded by snow-tipped mountain peaks and the majestic Victorian Glacier, Chateau Lake Louise is on the shore of pristine Lake Louise, where you can hike, downhill or cross-country ski, cycle, and canoe. See Fodor's full review. 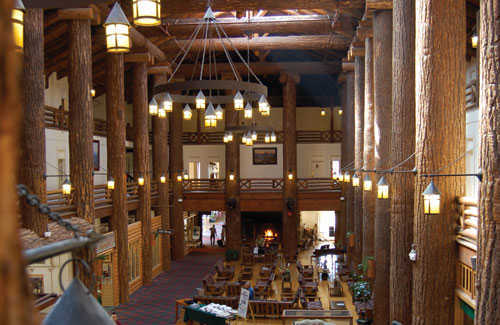 An eclectic interior design with towering tree trunks highlights Glacier Park Lodge. Samuel L. Bartlett was the architect of record, but Louis Hill, president of the Great Northern Railway, controlled every aspect of the design. Hill patterned the lodge, which opened in 1913, after the Oregon Forestry Building he saw at the Lewis & Clark Exposition in Portland. He had 60 Douglas firs (40 feet high and 40 inches in diameter) shipped in from the Northwest for the colonnade. When rail passengers arrived at Glacier Park Station, they saw Indian teepees scattered across the lawn as part of a show presented to visitors, colorful banks of flowers, and the majestic lodge. The park and lodge were heavily promoted. On top of the half a million dollars it took to build and furnish Glacier Park Lodge, Hill spent $300,000 on artists, filmmakers, calendars, playing cards, and a special train car with a public exhibit. See Fodor's full review. 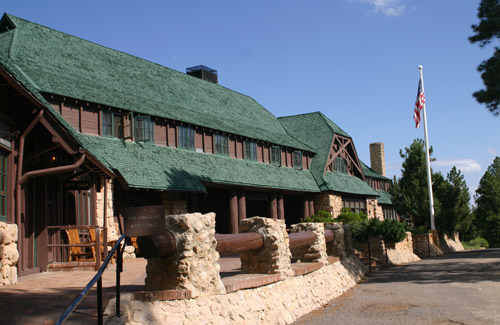 Bryce Canyon Lodge was the second structure built in the Union Pacific’s Loop Tours building program, which included Cedar Breaks, Zion, the North Rim of the Grand Canyon, and a stop at Kaibab National Forest. In a grove of ponderosa pines within walking distance of the rim, the lodge opened in 1925 with 70 guest rooms, three deluxe suites, one studio room, and 40 log cabins. The property was known for its sing-aways, where employees lined up in front of the lodge and sang a farewell to departing guests. When plans to build another lodge on the rim didn’t materialize, a gift shop, soda fountain, barbershop, and auditorium were added. See Fodor's full review. 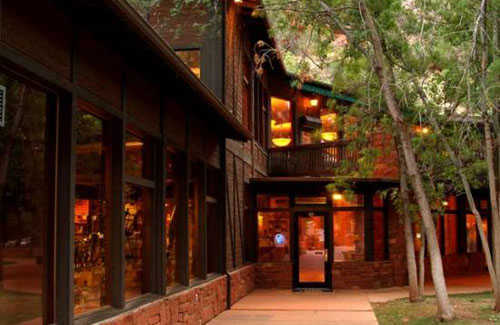