Arts & Culture Kristin Vuković The 5 Most Insane Stories From the Museum of Hangovers
PHOTO: ROBERT SBARRA/Shutterstock

Don’t judge these libraries by their covers.

Libraries are one of the most vital and important institutions in any society or community. They safeguard history, culture—democratizing access to information and literature. But there’s more to their physical spaces than the books that occupy their shelves. The world’s most impressive libraries also happen to be home to unique art, artifacts, and unique agreements you might not notice right away. 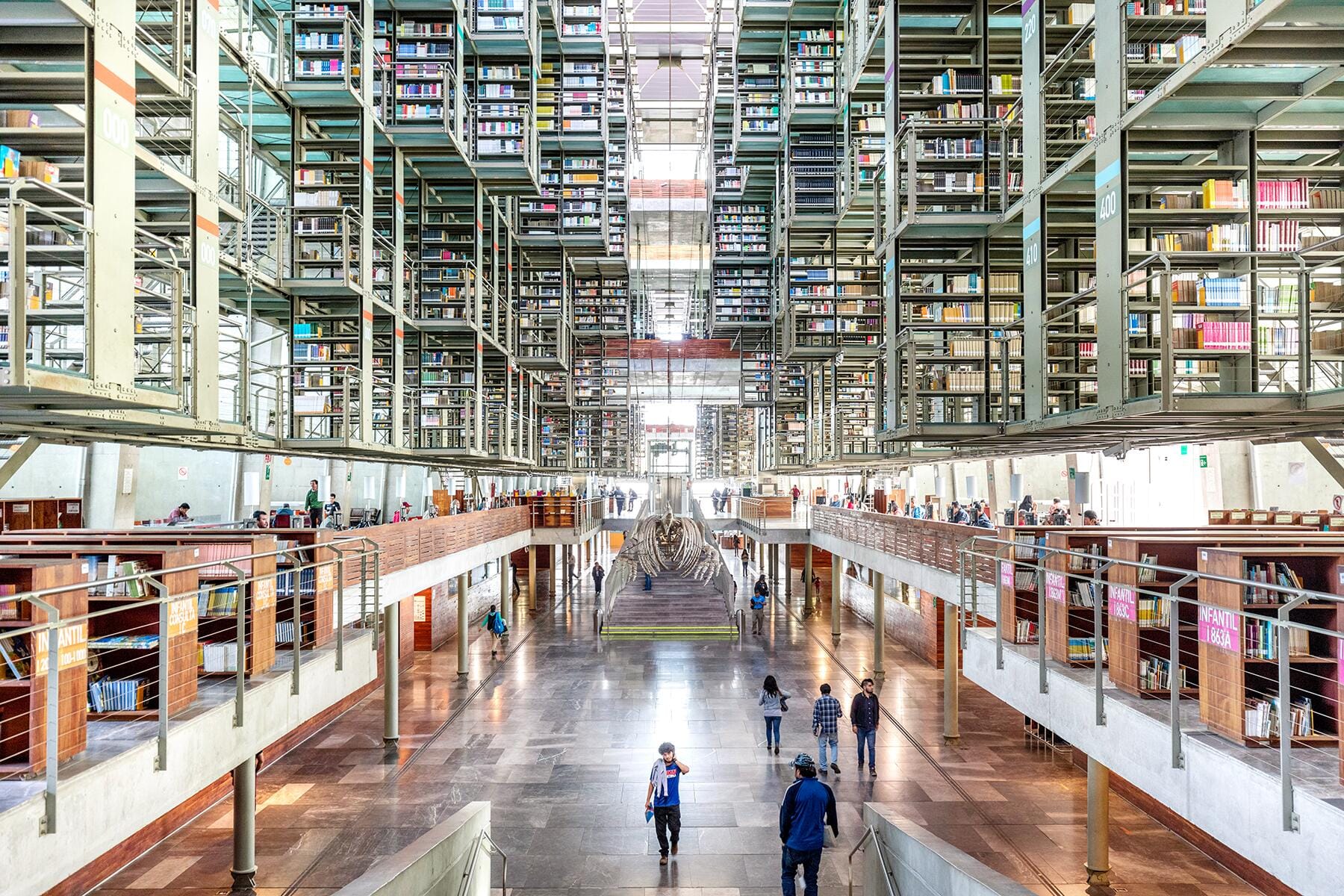 While many major libraries are designed to evoke the loftiest aesthetics of the past—all Gothic Revival pointed arches and neoclassical columns—but Mexico City’s Biblioteca Vasconcelos has its sights firmly set on the future. Designed by Alberto Kalach and completed in 2007, this massive library is made up of stories of transparent walls and intricately connected balconies and walkways. This open design makes it so the bookcases look as if they’re floating in midair. The effect is reminiscent of something out of Brazil or Blade Runner. The combination of its futuristic design and immense scale has led to the library being nicknamed “Megabiblioteca” (“Megalibrary”).

One of the most incredible features is the suspended whale skeleton (not a cast, but the real deal) suspended over its central atrium. But what sets this apart from what you might see in natural history museums is that it is not simply a skeleton. It’s a sculpture by Gabriel Orozco entitled Mobile Matrix. If you look closely at the whale you’ll notice that it has been etched with concentric circles, which took a team using 6,000 pencils to complete. 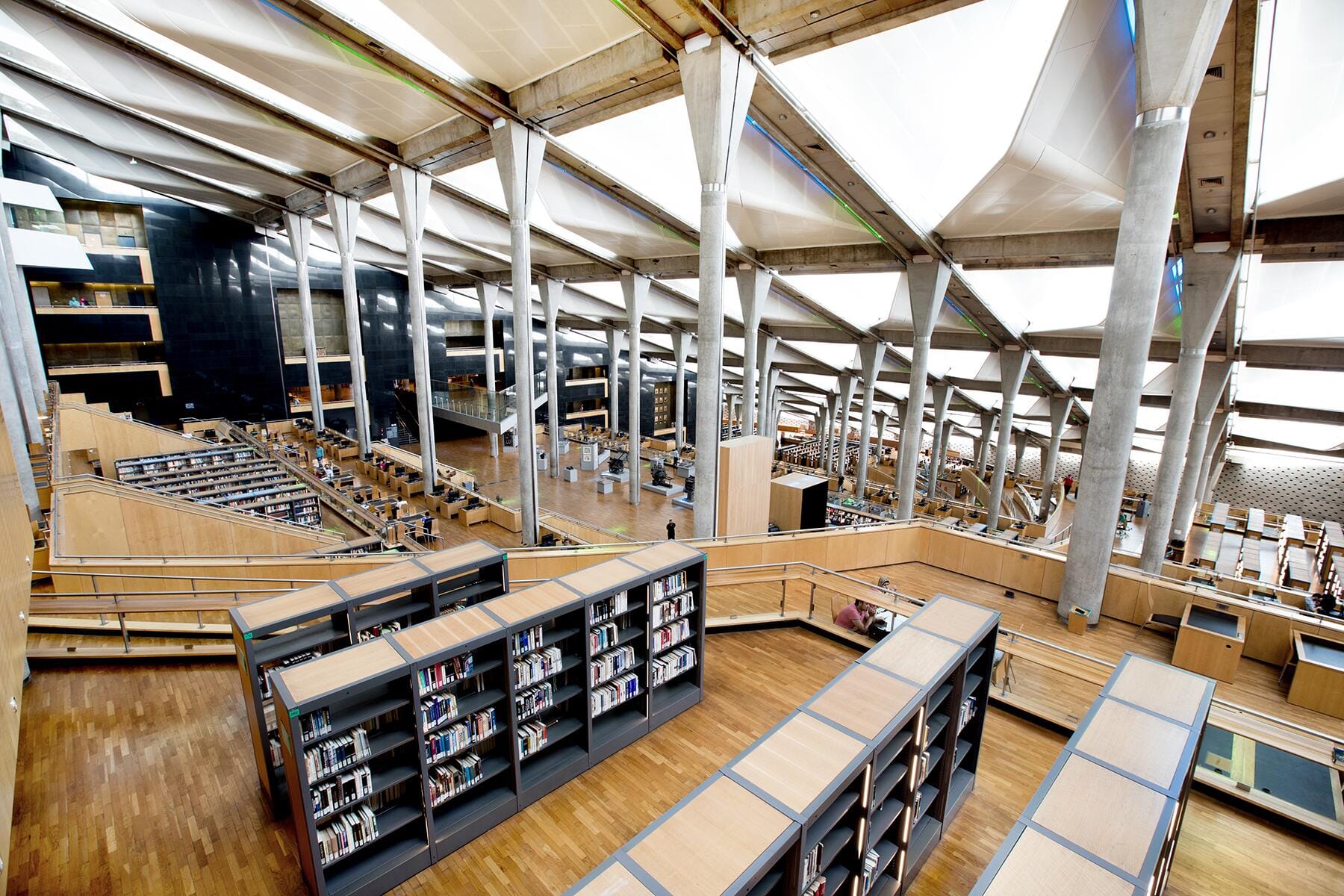 Unless you have a time machine, you’re not going to be able to visit the Library of Alexandria. But you can visit a Library of Alexandria. The Bibliotheca Alexandrina, which was inaugurated in 2002, is not only a memorial to the ancient library, but as a cultural and scientific institution in its own rite. There’s nothing ancient about this library’s design, however. Designed by the Norwegian architecture office, Snøhetta, the library has a decidedly modern look. The library’s main focal point is a large, slanted disc. But it’s not just functional (the tilt allows natural light into the interior) or an aesthetic choice—the shape is meant as an evocation and representation of the cyclical flow of knowledge. An appropriate theme connecting this contemporary institution to its storied and ancient past. 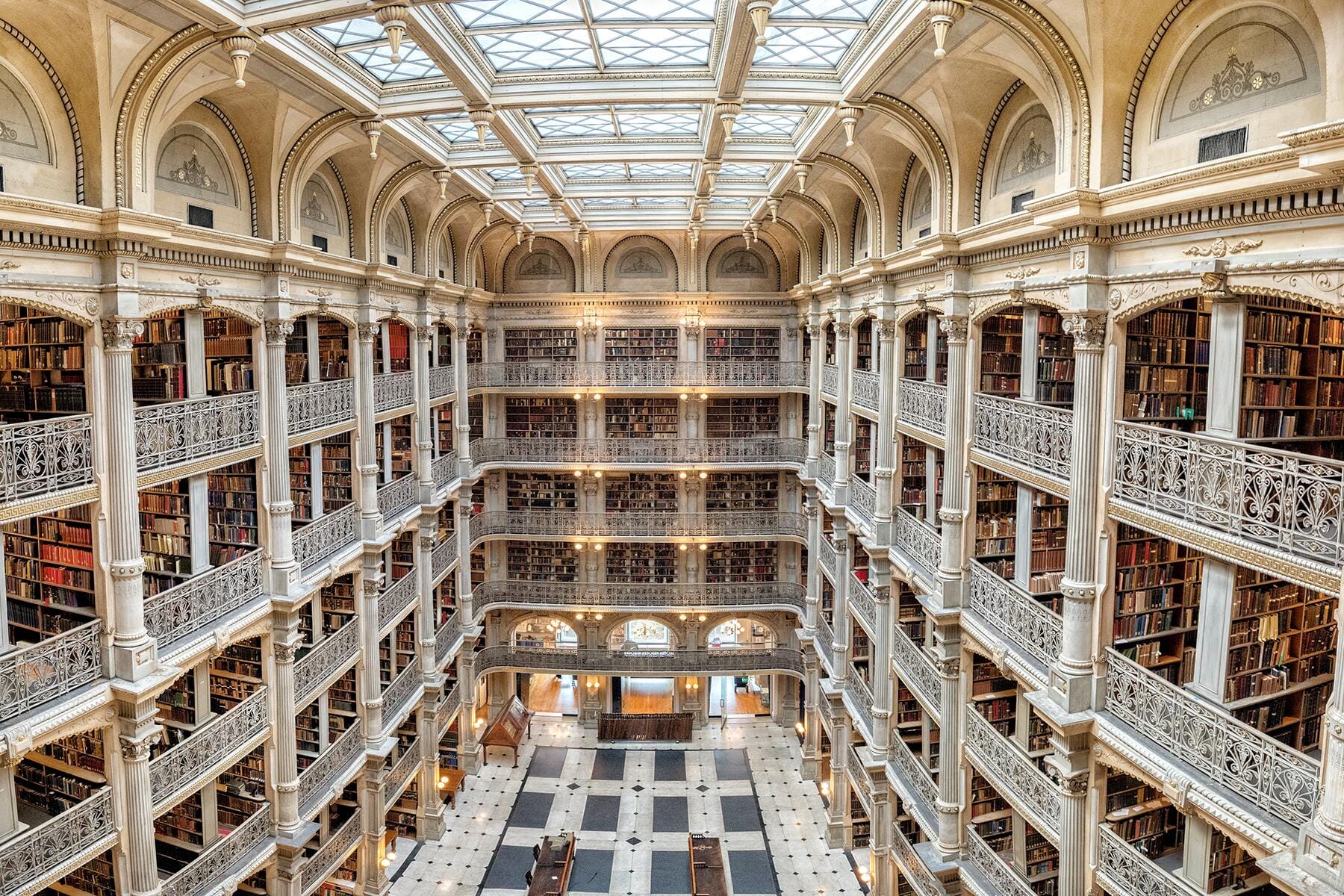 The George Peabody Library is frequently regarded as one of the most beautiful in the world. Its interior features a wide array of architectural elements that originate from a number of different styles—Beaux Arts, Georgian, Greek Revival, and Renaissance Revival to name a few—for an effect that is opulent yet cohesive. But one of its most prominent features—a skylight that overlooks the central, five-story tall atrium—had become a point of concern. The panels of the skylight would lift in high winds, a potential threat to the library’s 300,000 rare texts, including a 17th-century printing of Don Quixote as well as a first edition of Moby Dick. Reinforcing the panels required a complex solution that would not only be strong enough but wouldn’t compromise the library’s historic design, and the project itself had to be completed with the limited space without endangering the collection. The process was complicated to say the least, but in the end the skylight was reinforced, the collection protected, and visitors can continue experience the library in all of its splendid, historic glory. 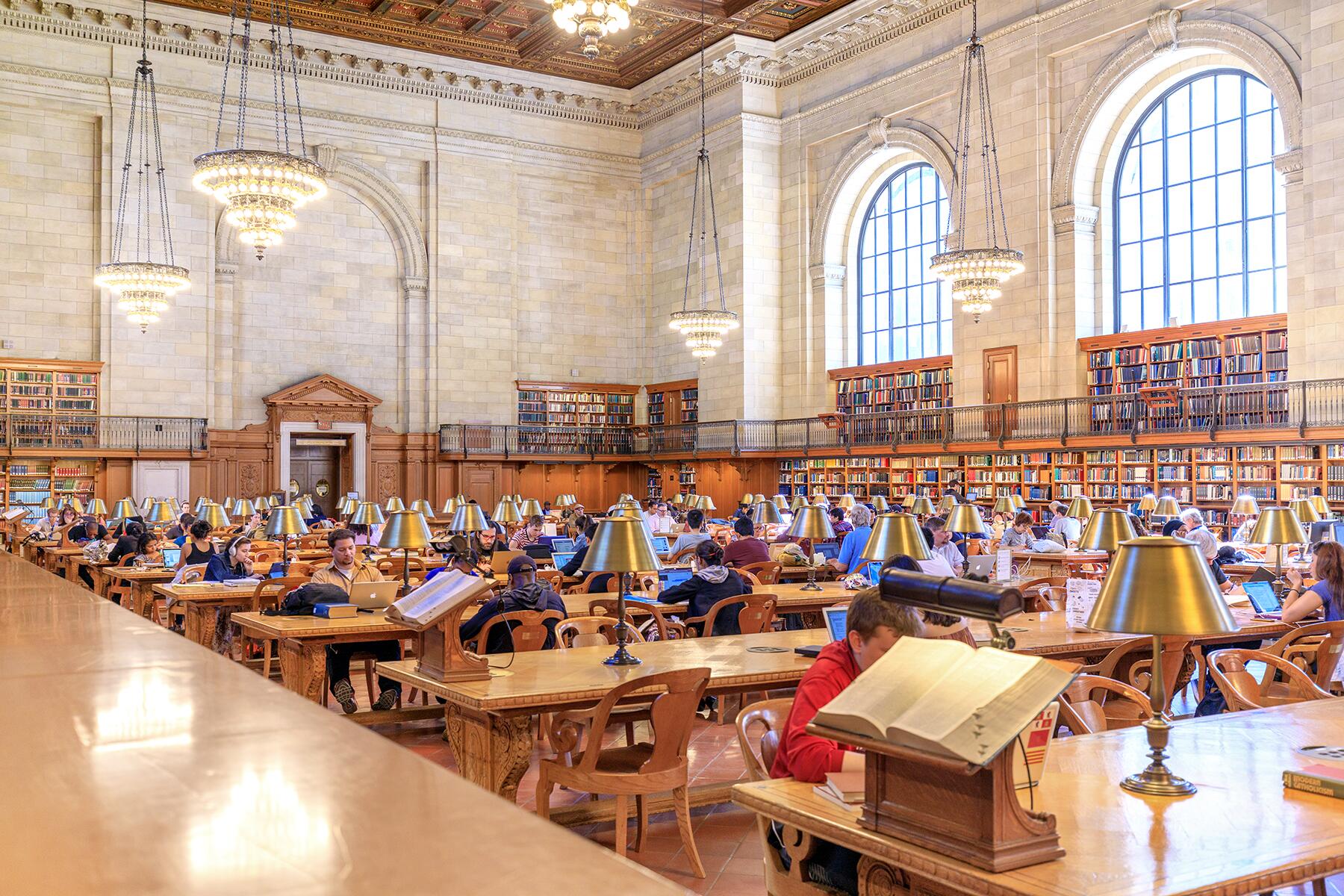 The New York Public Library is an iconic institution, known for its stunning main branch and impressive collection of texts. And while it seems understandable—even likely—that such an institution would house rare and old works by some of the English language’s most notable scribes, it’s a bit jarring to discover that a collection dedicated to life and work Romantic poet Percy Bysshe Shelley isn’t just an assemblage of his writing and letters, it’s also home to a literal piece of Shelley. Visitors of the Carl H. Pforzheimer Collection of Shelley and His Circle, located on the third floor of the New York Public Library’s main branch, can view what are purported to be fragments of Shelley’s skull. The flakes were originally collected by Edward J. Trelawny, a friend of Shelley who identified him upon his death, who is perhaps more famous for taking what he claimed to be Shelley’s unburnt heart from his funeral pyre. Now devotees of one of the most highly-regarded poets can view the fragments, a sentiment the widowed Mary Shelley, who kept the aforementioned heart wrapped in silk in her desk, might have very well appreciated. 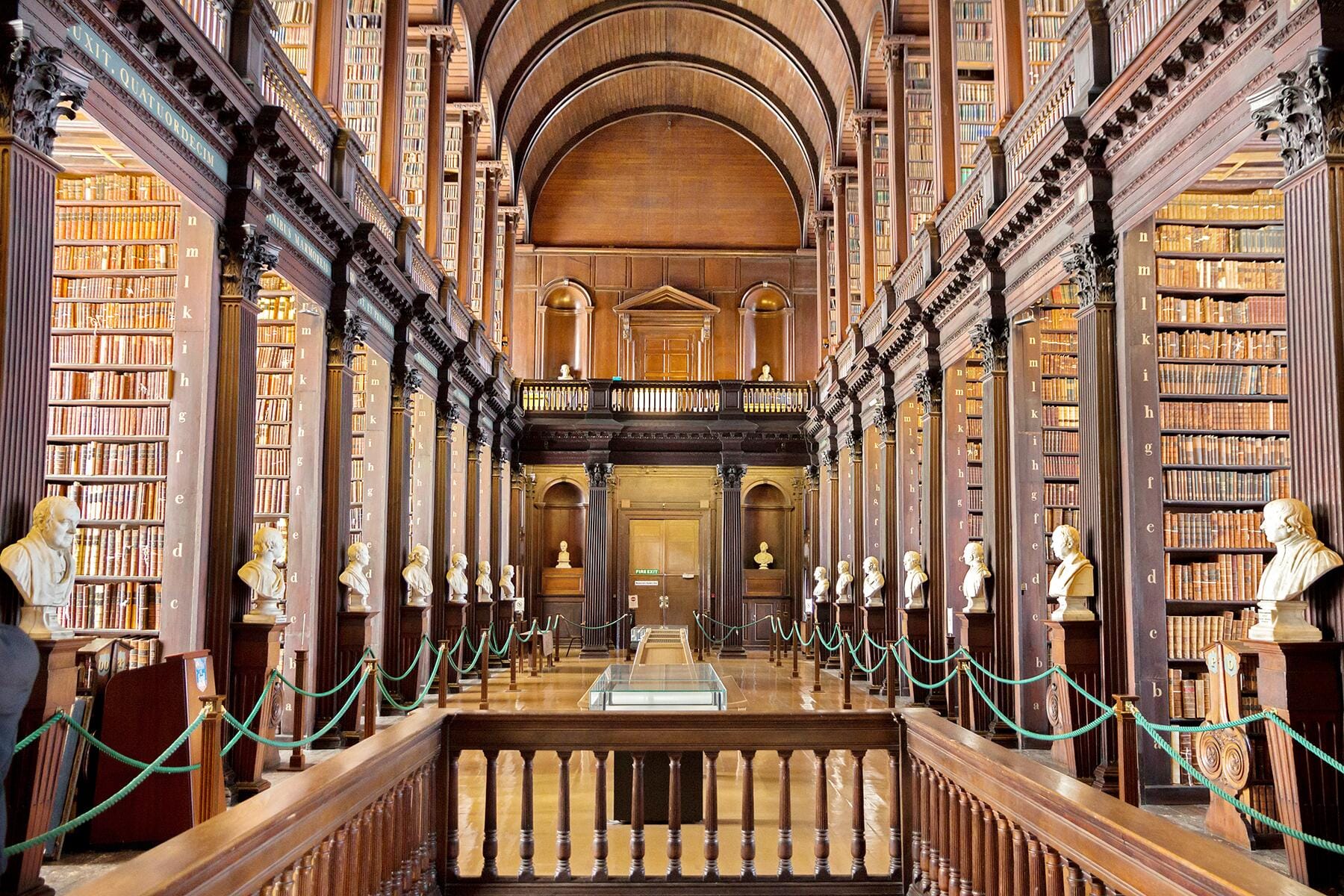 Trinity College Library is famous for one book in particular—Book of Kells, an illuminated manuscript containing the four Gospels of the New Testament that’s believed to have been created between the sixth and ninth centuries. But one intriguing fact about Trinity College Library is its status with regard to not just a single book but many. Specifically, every book printed in Ireland as well as any book printed in the United Kingdom upon request. Trinity College Library has the unique status due to the fact that it’s also a copyright library. That means all books published in Ireland (and potentially any books printed in the U.K.) must deposit one copy at the library so that it can be accessed for research and preserved for future generations.