Dressing up as a ghost, ghoul, fantasy figure or celebrity and kids trick-or-treating is the American idea of Halloween. But its somber roots are in its very name: originally All Hallows’ Eve, it was the night before All Saints’ Day, followed by All Souls Day, both honoring the dead. But Halloween is just one of many festivals to remember the dead worldwide, whose events range from lantern-lighting and partying in cemeteries to buffalo-racing.

Flying gigantic kites at cemeteries is how the towns of Sumpango and Santiago Sacatepequez celebrate All Saints Day in Guatemala. The kites are usually round, often 40 or more feet wide, and intensely colorful, painted with flowers, animals, and geometric patterns like the country’s Mayan textiles. The kites are hand-made from paper and cloth with bamboo frames by villagers. It’s believed the higher the kites fly, the closer their messages are to reaching the dead in heaven. The 3,000-year-old Mayan tradition  began long before the Spanish brought Catholicism to Guatemala.

Banks of the Foyle Halloween Carnival

Ireland is where Halloween was born as the Celtic festival of Samhain, when ghosts walked among the living. Traditions abound, like bonfires and eating barmbrack, a fruitcake whose contents can tell your fortune. Find a ring, and you’ll be married within a year; a thimble, and singlehood is in your future; a stick, and lots of travel is in your future (we can help). So it’s fitting Europe’s biggest Halloween costume parade is in Derry (Londonderry) in Northern Ireland, next to County Donegal. Derry’s 400-year-old, 18-foot-high walls are the site of ghastly performances, installations, lights, and music from October 27-30, and a parade of circus and street performers and costumed revelers walk the streets on October 31, topped off by fireworks.

For this three-day Lantern Festival in August, people light lanterns in their homes to welcome the souls of their ancestors to earth, and place lanterns on rivers or ponds to guide them back on the final day. In Kyoto, the best place to see the magic of glowing colorful lanterns at night on the water is the Arashimaya district, full of temples and gardens. Bonfires are lit on five mountains that tower over Kyoto to guide the souls and defend against evil, a tradition dating to the 13th century: three fires shaped like Chinese characters used in Japanese writing, one shaped like a Shinto shrine gate, and one in the shape of a boat.  Almost 10,000 lanterns with wishes tucked inside are set afloat, as monks chant, in Eihei-ji in Fukui prefecture.

Traditional dancing in kimonos and wooden sandals also takes place in Gujo city and Tokushima city. Fruit and vegetable offerings are left at Buddhist temples, where a fire is lit at the gates at the start and end of O-Bon. 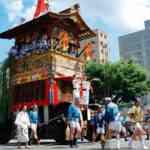 WHERE: Isle of Man, Great Britain

As if being home to oddities like tailless Manx cats and unusual four-horned sheep wasn’t spooky enough, the Isle of Man, a rural island between northern England and Northern Ireland with a strong Celtic heritage, celebrates its own novel twist on Halloween, Hop Tu Naa. Singing traditional songs about cattle-killing and Jinny the Witch (a woman tried for witchcraft in 1715), carving lanterns from turnips, baking Dumb Cake (which is eaten in silence), storytelling about local superstitions, dancing, and a parade led by musicians are the highlights of this family-friendly Halloween festival, held in Cregneash village.

In the colorful Festival of Cows in the Kathmandu Valley, families with relatives who died in the past year lead a cow (if none is available, a child dressed as a cow) in a procession through the city. It’s a carnival-like, joyous atmosphere, full of comedy, satire, costumes, and painted faces, and bystanders hand sweets, bread, and money to participants (cows and faux cows alike) as they pass. Cows, sacred to Hindus, are used because  the dead cross a river on the way to heaven by grasping the tail of a cow, it’s believed. Gai Jatra began when a 17th century King of Nepal offered a reward to anyone able to make his Queen, in despair after their son died, smile again. Some did, mocking high-ranking society figures and events, so the King decreed future festivals should be fun for all. In cities like Bhaktapur and Patan, men dress as women or as Hindu deities.

In El Salvador, locals parade dressed as characters from Central American folklore, from La Siguanaba, a beautiful, flirtatious woman cursed for abandoning her son (forever doomed to look ugly up close), El Cadejo, a scary-looking devil dog, to La Llorona, a weeping woman looking for her lost child, in Tonacatepeque, a town north of San Salvador. The November 1 festival, which features torches, painted carts, chanting locals, and cooking pumpkin and honey late at night in the main square, long predates the Spanish conquest in this town, originally an indigenous Pipil settlement. The next day, throughout El Salvador, families place flower wreaths on the graves of their dead and picnic with them in cemeteries.

Salem, infamous for the witchcraft trials in 1692 that resulted in the execution of 20 women and men, is an eerie place any time of year: several museums, films, and re-enactments are devoted to the witch trials, and real-life witches separate myth from fact at Salem Witch Village. There are shops selling charms, potions, spells and other items for your witchly needs, and psychic and tarot readings are abundant.

But this city near Boston goes wild with Haunted Happenings in September and October. Over 100 events including seances, ghost legend talks, movies and plays, night-time graveyard walks, haunted house tours, parades,  a Samhain Magick Circle in a park, a Witches’ Ball on Halloween night, a Dumb Supper (eaten in complete silence to honor the dead), and a Festival of the Dead held by local witches.

The Festival of the Hungry Ghosts, an ancient Chinese tradition, placates the spirits of the dead, who wander the world for 24 hours, with food offerings and burning joss paper, incense, and faux money on the 15th day of the seventh lunar month (September 5, 2017).  In Hong Kong, over 1.2 million people whose ancestry is in nearby Guangdong province celebrate the entire lunar month, and entertain the dead (and living) with Chinese opera citywide.  In 2017, an exhibit of Chinese customs and contests for offerings and treats were also held in Victoria Park. But if you arrive on October 31, you’ll find Western-style costumed revelers in bar districts and theme parks with Chinese ghost-story attractions.

The Celtic festival of Samhain was first held on a hill in Meath, a county north and west of Dublin that boasts Ireland’s best-known ancient ruins. So it’s no surprise this Halloween festival lasts from mid-October to early November, with many family-friendly events at various locations. Spirits of Meath features “horror farms” with haunted activities indoors and outdoors, scary movies, murder mystery dinners at hotels and restaurants, story-telling, children’s games, and Halloween treats. Test your knowledge with a Halloween quiz, whose trivia includes what vegetables were used for the first jack-o’-lanterns (hint: not pumpkins) and which Irish city Dracula author Bram Stoker hailed from.

One of the biggest holidays in Korea, Chuseok is when families get together and hold a memorial service at home for their ancestors, followed by a feast with traditional foods, and visits to ancestors’ graves to pull up weeds to respect the dead. It’s like a Korean Thanksgiving, except with round rice cakes stuffed with red bean paste and sesame seeds and savory Korean pancakes stuffed with fish, meat and vegetables, on the menu. Held at harvest time on the 5th day of the eighth lunar month (October 3-5, 2017), the festival also features a circle dance by women in traditional Korean dress, masked dances, and Korean wrestling.

New Orleans’ official Halloween parade stars big showy floats by the same float-makers who make many floats for Mardi Gras, and fantastically-costumed riders who throw light-up beads and trinkets to the crowd. The parade route is the French Quarter and Warehouse District, after starting in Faubourg Marigny. The city, often considered the nation’s most haunted, has haunted tours, voodoo, vampire, and above-ground cemetery tours year-round. But taking a night tour at Halloween time adds an unusually spooky, spine-tingling effect. 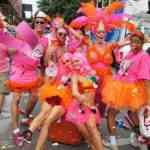 This 10-day festival honors spirits who visit the earth at this time, the creator of the universe, and the victory of good over evil on Bali, the Hindu-majority island in Muslim-majority Indonesia. Locals build tall curving bamboo poles at their house entrances and decorate them with coconuts and flowers. They also create fruit and flower offerings for temples (which women clad in traditional dress carry atop their heads) and their home altars, and make colored rice cakes and slaughter pigs for the spirits.

A man dressed as a barong, a mythical furry beast who is a divine protector, visits homes in villages and dances as people pray to him in an exorcism to drive away evil. On the last day, when the ancestral spirits return to the world of the dead, locals make offerings of yellow turmeric-flavored rice. The most important festival on Bali, it’s held twice a year, and starts November 1.

For the last two weekends of October, the only Victorian house museum open to the public year-round in San Francisco is transformed into a haunted house. At Haas-Lilienthal-house, a 1886 Queen Anne-style mansion with a turreted corner tower topped by a “witches cap,” a guide spins an eerie tale about a fictional doctor fond of conducting weird experiments as he leads you around the pitch-dark mansion, lit only by candles. You’ll be grabbed at when you least expect it; screams are guaranteed.

In Mexico, people visit cemeteries bringing the favorite food, drinks, and mementos of the deceased. Graves are decorated with flowers (orange marigolds, especially) and candles for festive reunions with the dead. At home, people create small altars with photographs of dead loved ones, decorated with flowers, food, and drink. Skull-shaped sweets and “bread of the dead” (pan de muerto, a coffee cake adorned with bone-shaped meringue) are served, and skeleton-shaped papier-mâché figures are abundant.

A tradition of indigenous peoples long before the Spanish conquest, Day of the Dead later merged with All Saint’s Day. Oaxaca celebrates the holiday with zest, and Xoxo cemetery is the most-visited: expect bells to start ringing at sunset to summon the dead, and continue all night until sunrise. Mexico City has paraders in skeleton- or ghost-themed costumes, and at Catrina Festival, women wear white face paint and long white dresses, after an artist’s sketch that became a popular Mexican icon. In Guadalajara, El Panteon de Belen, a former hospital cemetery, is open at night for dramas and puppet shows that tell legends about its dead (a huge oak tree that seemingly sprouts from a grave grew from the stake used to kill the vampire buried there).