'Tis the season for "babies napping outside!"

With the long nights of winter approaching, a little inspiration can go a long way toward brightening our days. Thankfully, countries across the globe have come up with plenty of fun, intriguing, and unique ways of celebrating the season’s dog days that are not only inspiring, but also downright delightful. Many of them are centuries-old festivities while others are relatively new, yet all of them provide a bit of possibility and, at times, a touch of laughter in a year where those things are exceedingly hard to come by. From Lithuania to Taiwan, don’t miss these 12 favorite, quirky winter traditions. 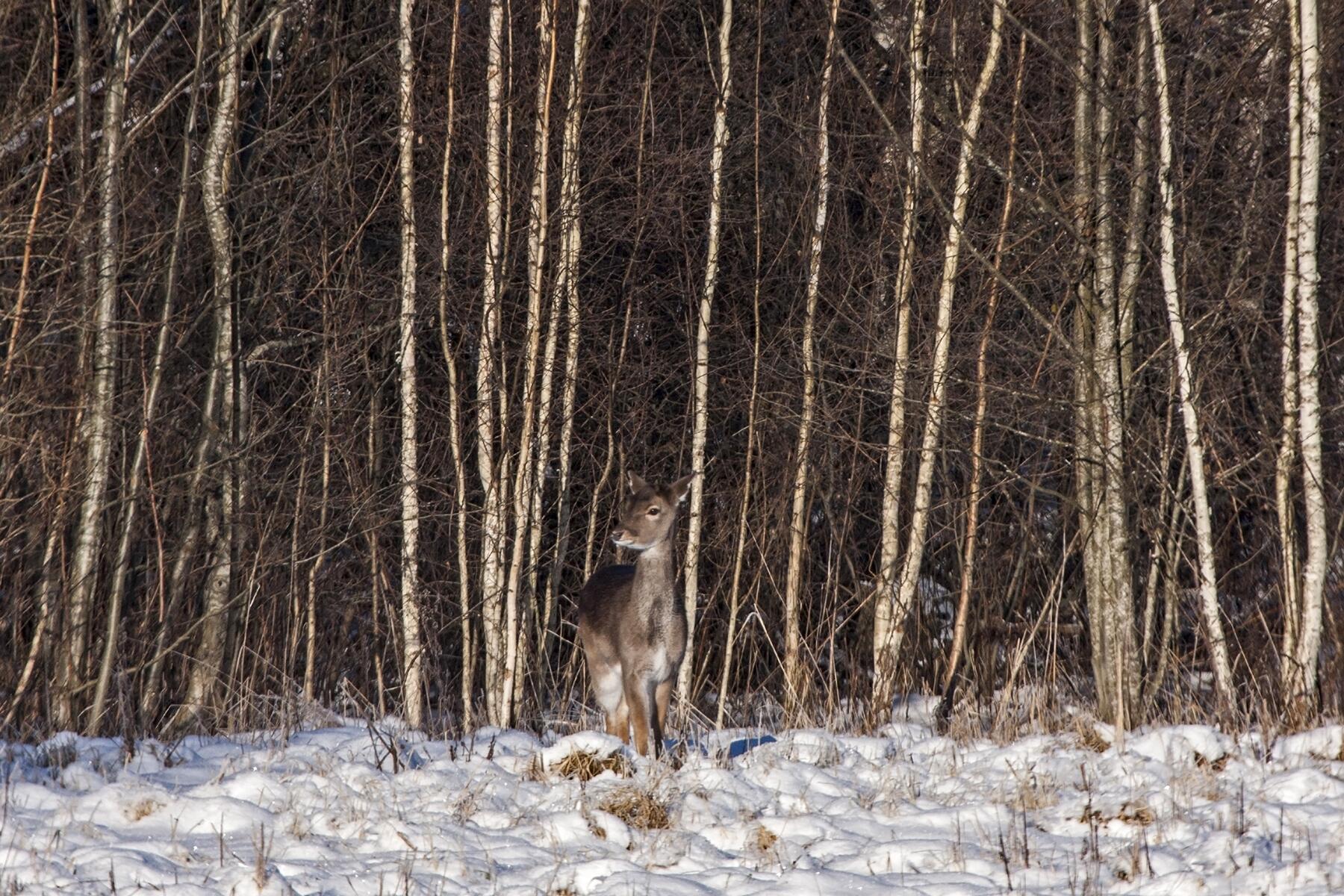 On the coldest days of the season, it’s a long-standing Lithuanian tradition to head out into the wilderness and feed animals whose typical food supply might be buried beneath heavy mounds of snow. Local residents bring potatoes, hay, and vegetables like manglewurzel (a type of beetroot) for such wildlife as deer, hare, and wild boar. “We have a sense of responsibility to the forest,” says Lithuanian Renata Stanaityte, “especially those of us living in the countryside.” 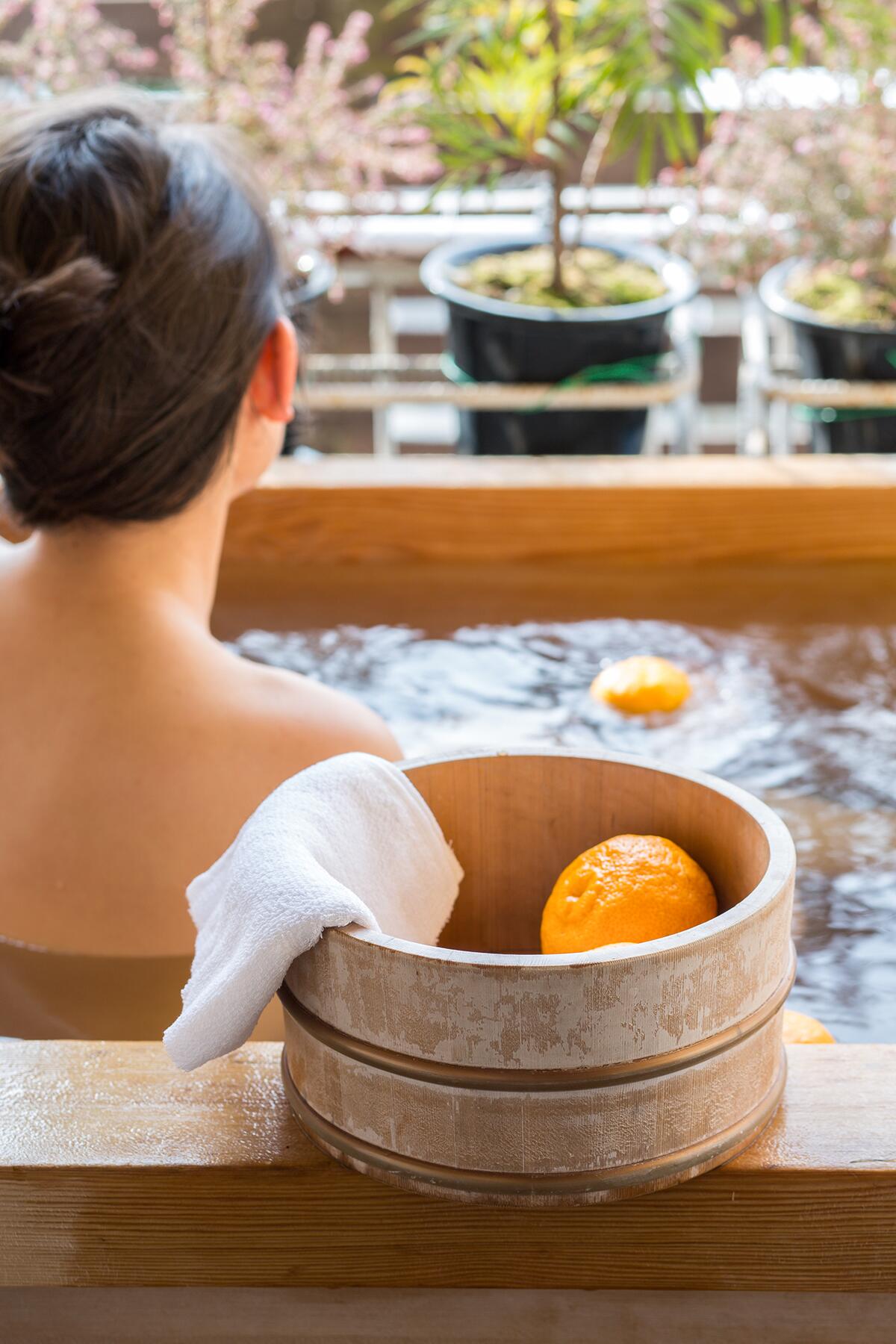 Winter’s cold days and long nights require a bit of pampering. That’s why, in Japan, it’s common to draw steaming baths filled with yuzu, an aromatic, citrus fruit that’s something between a grapefruit and lemon. The fruit can be whole, halved, or placed within a cloth bag to slowly release its scent, which is believed to ward off colds and to ease both the body and the mind. This customary practice has taken place since at least the early 1700s and is tailored to the winter solstice, though many Japanese people practice the soothing ritual all season long. It’s also considered a good luck ritual for the coming year (so start filling up that tub!). 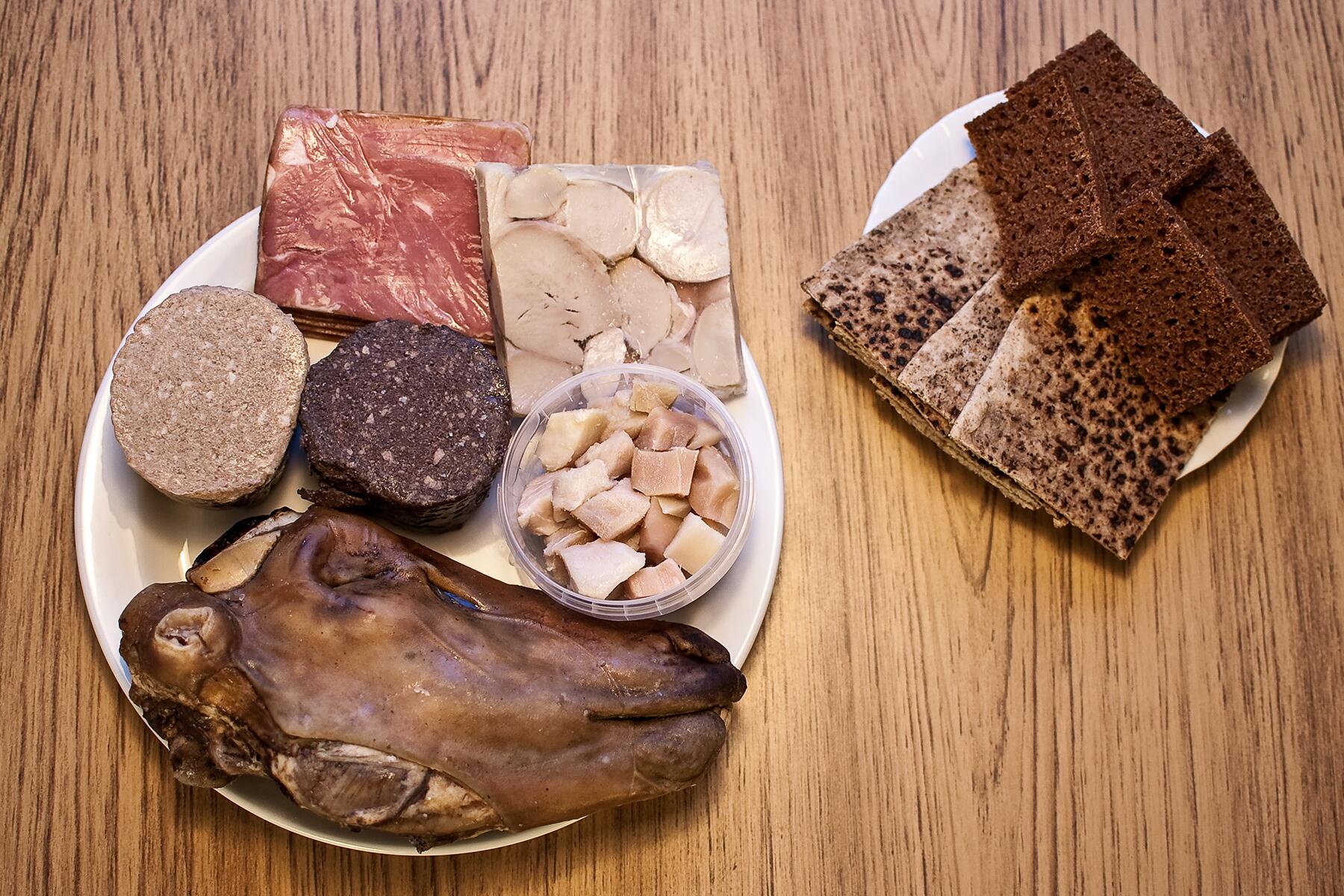 Iceland’s Þorrablót is a mid-winter festival that dates back centuries and takes place in the fourth month of the Icelandic pagan calendar (mid-January through mid-February). Because it’s based around a sacrificial ritual meant to keep things on earth favorable with Þorri, or Old Man Winter, Icelanders deliberately kept the event under wraps once Christianity took over, beginning in 1000 A.D. Now that the festival has been revived, the storytelling traditions of old aren’t nearly as prominent, but dining on a massive feast of foods that are dried, salted, putrified, and preserved in whey remains the norm. Dishes like sviðakjammi (sheep head with the eyes intact), súr hvalur (pickled whale blubber), and hákarl, a fermented Greenland shark that “puts hair on your chest,” says Iceland native Björg Rós Guðjónsdóttir, laughing, are par for the course. 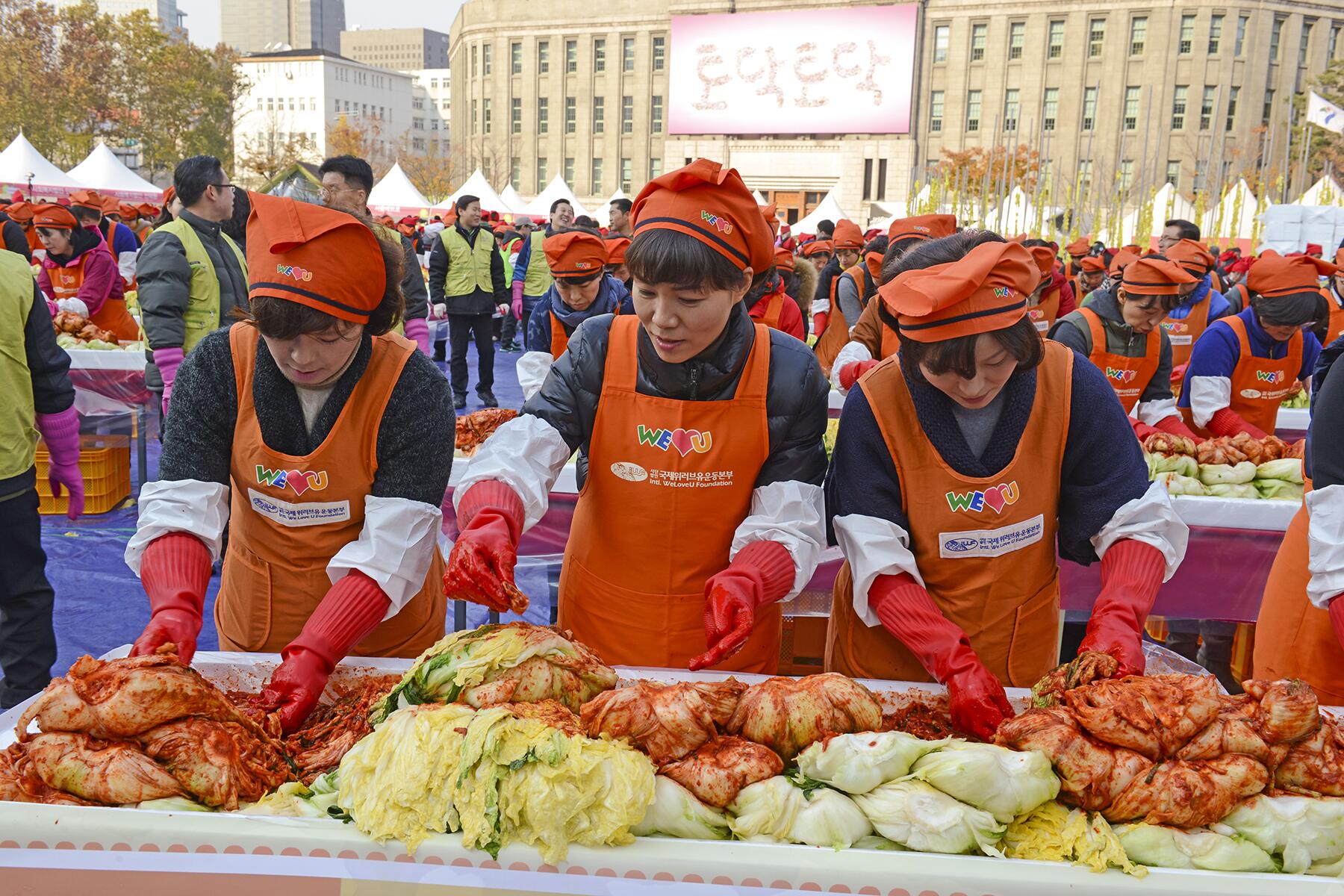 Each year toward the end of November or beginning of December, extended families, friends, and various communities throughout South Korea gather to mark the start of winter with Kimjang: in essence, the preparing and storing of kimchi. This mix of fermented vegetables (most notably napa cabbage) spiced with a variety of flavors, including garlic, ginger, and gochugaru, or Korean pepper flakes, is a Korean food staple. It’s also one that’s quite labor-intensive to make, which is one of the reasons kimjang has become such a collective practice over the millennia. In fact, UNESCO says kimjang “reaffirms Korean identity and is an excellent opportunity for strengthening family cooperation,” and is why the agency added it to their Lists of Intangible Cultural Heritage in 2013. 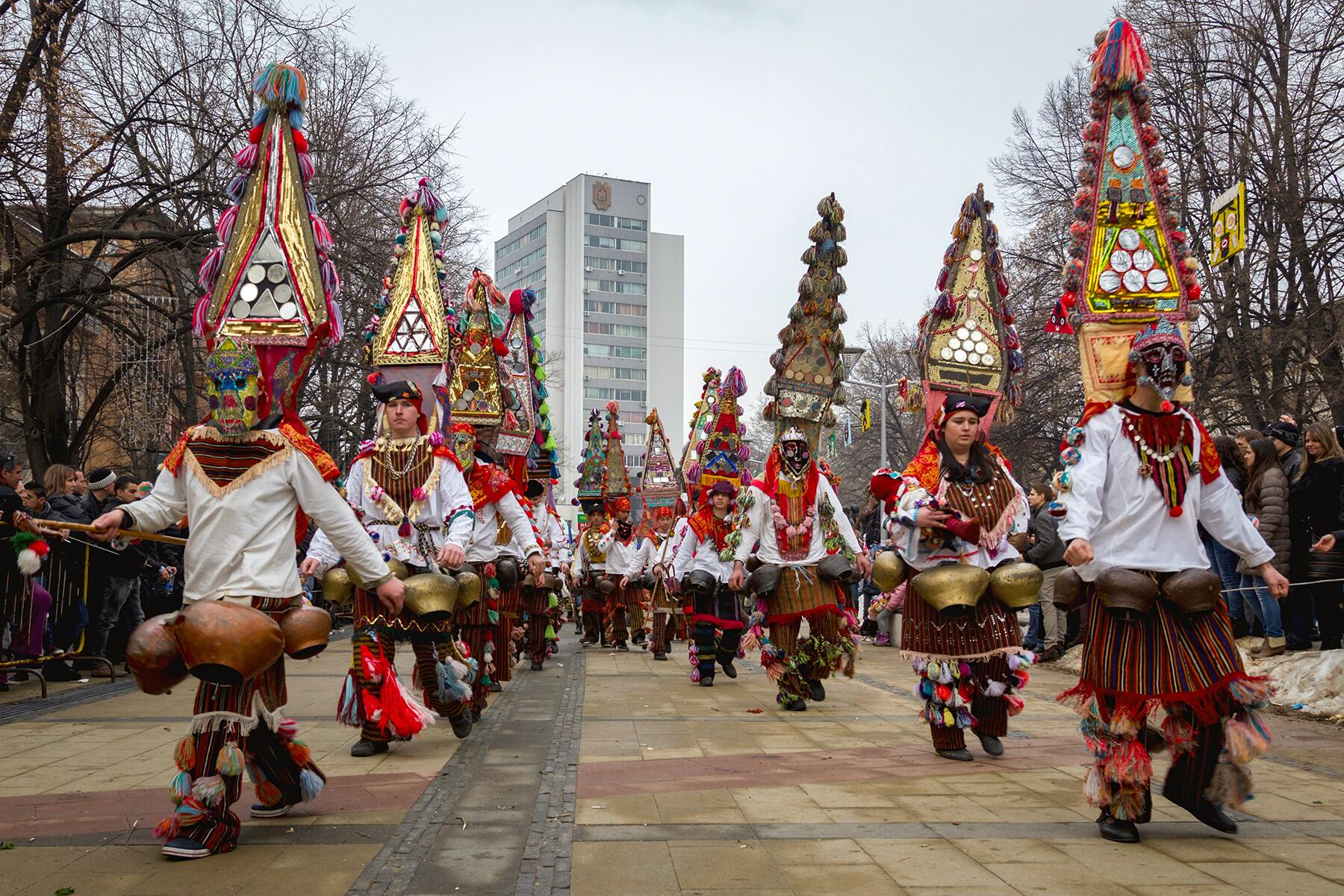 A Bulgarian tradition that dates back thousands of years, Kukeri are groups of men (and now women) who don monster-like masks and elaborate costumes made of fur, animal skins, and feathers—the uglier, the better—held together by belts of huge hanging bells, and then dance around to scare away evil spirits. In the past, they often went door to door, but today these “Bulgaria guardians” appear mainly in mini-plays performed throughout towns, and at festivals. Most notably Surva, the International Festival of Masquerade Games, takes place in western Bulgaria’s Pernik each January. Musicians often accompany these marvelously scary creatures, lending an extra air of festiveness when they appear. 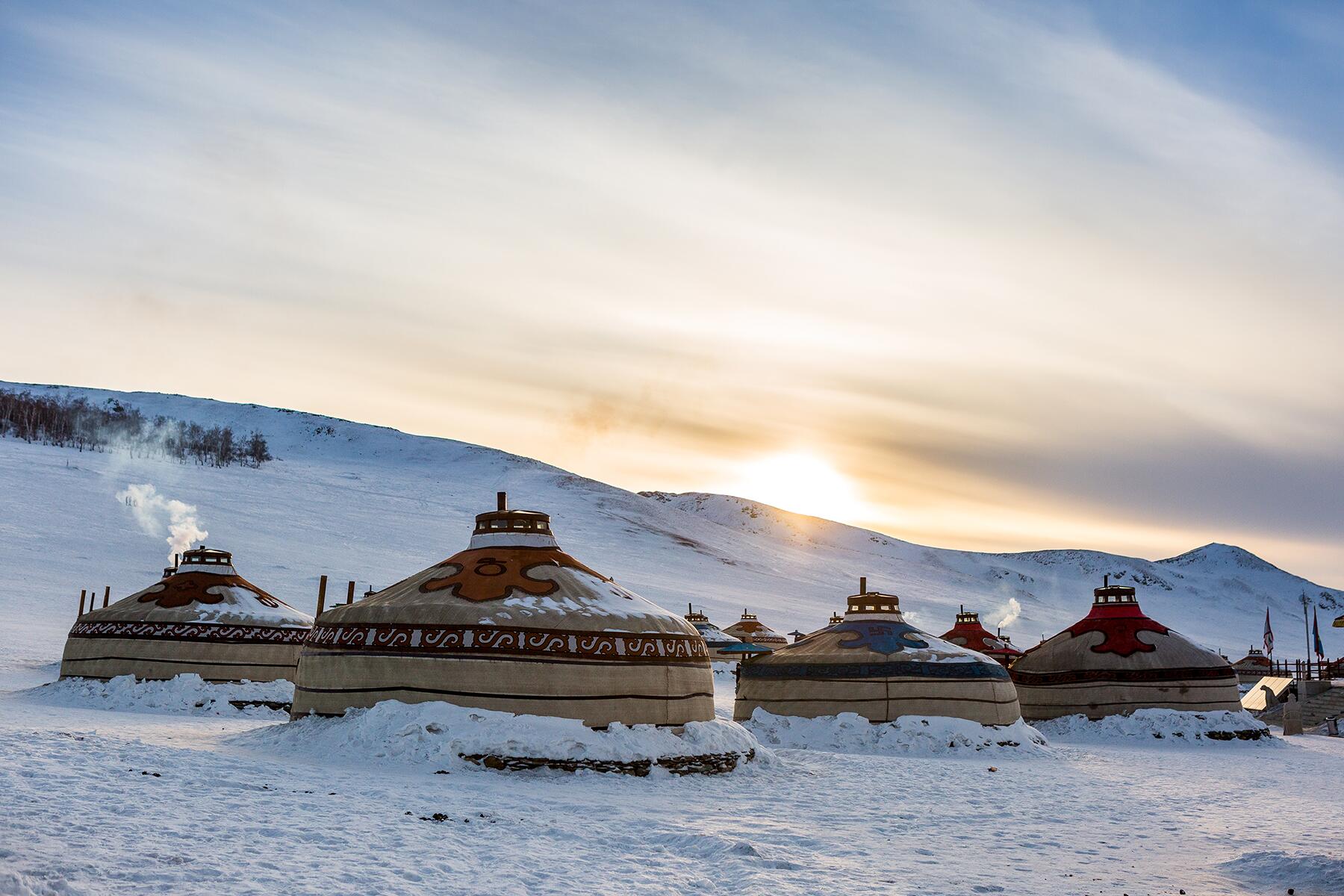 With temperatures often well below zero, Mongolia’s winters can be especially brutal, so residents have found a unique way to pass the time. It’s called “The Nine Nines,” and is a series of nine-day increments that break up the country’s most harrowing season into measurable (and manageable!) parts. The Nine Nines begins the day after the winter solstice and lasts for 81 days, beginning with the first nine-day allotment: the freezing of vodka made from milk. After the fourth “9,” in which it’s so cold that the horns of even a four-year-old ox will freeze and fall off, the onset of warmer weather begins. Mongolia’s nomadic herders first originated this method of tracking winter days hundreds of years ago, and now it’s a part of local life: one that’s especially hopeful with the arrival of the fifth “9,” when boiled rice stops congealing. 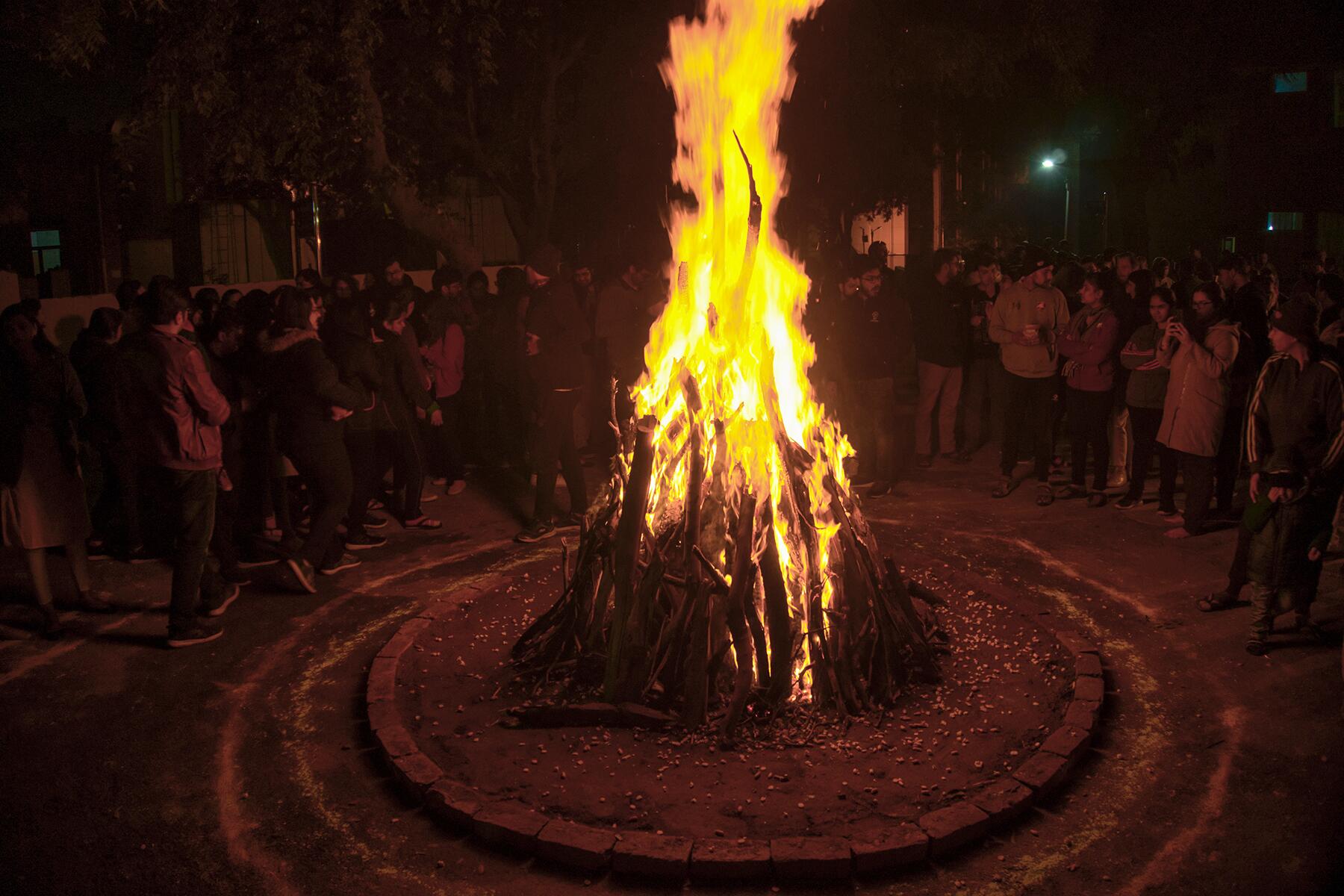 Although the Lohri Festival began in India’s Punjab state as a celebration of the annual harvest season, this ancient folklore-filled celebration is now prevalent across northern India, and places where large Punjabi communities reside. Typically held in mid-January, its festivities includes plenty of singing and dancing around a roaring bonfire, lots of vibrantly colorful attire, and loads of delicious eats, most notably sweets like gur rewri, a crispy sweet made with brown cane sugar and coated in sesame seeds, and the festival’s most prominent dish: sarson ka saag (mustard greens) served with a helping of unleavened makki di roti bread. Lohri also marks the beginning of longer days and is especially significant for new brides and babies who receive lots of gifts on the occasion. 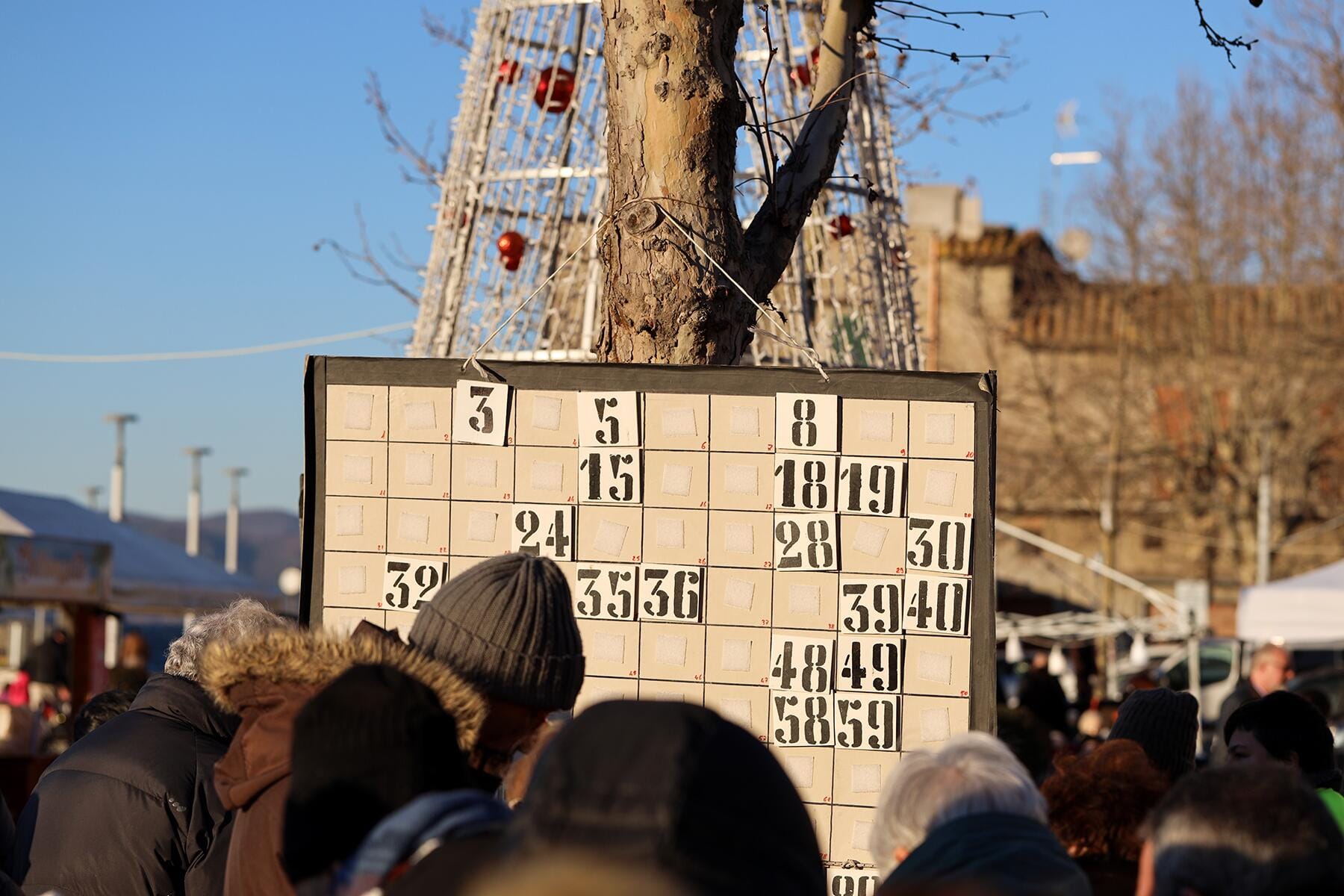 All across southern Italy, tombola, or “Italian bingo” as it’s often called in the U.S., calls to mind evenings of fun and laughter that transcend generations around the holidays. The game is a standard in regions like Puglia, Basilicata, and Campania in the weeks between Christmas Eve and the feast of the Epiphany (January 6), especially alongside a sweet bread snack such as panettone or pandoro and maybe a glass of prosecco or two. To play Tombola, participants get one or more individual playing cards, each one adorned with a series of random numbers that often represent symbols. For example, two means “the child,” and 14, “the drunkard.” As each number is selected at chance, the players mark those numbers on their card. The first player to cover all their numbers wins. To up the ante, family and friends sometimes offer prizes—typically something like a piece of chocolate or a picture frame. 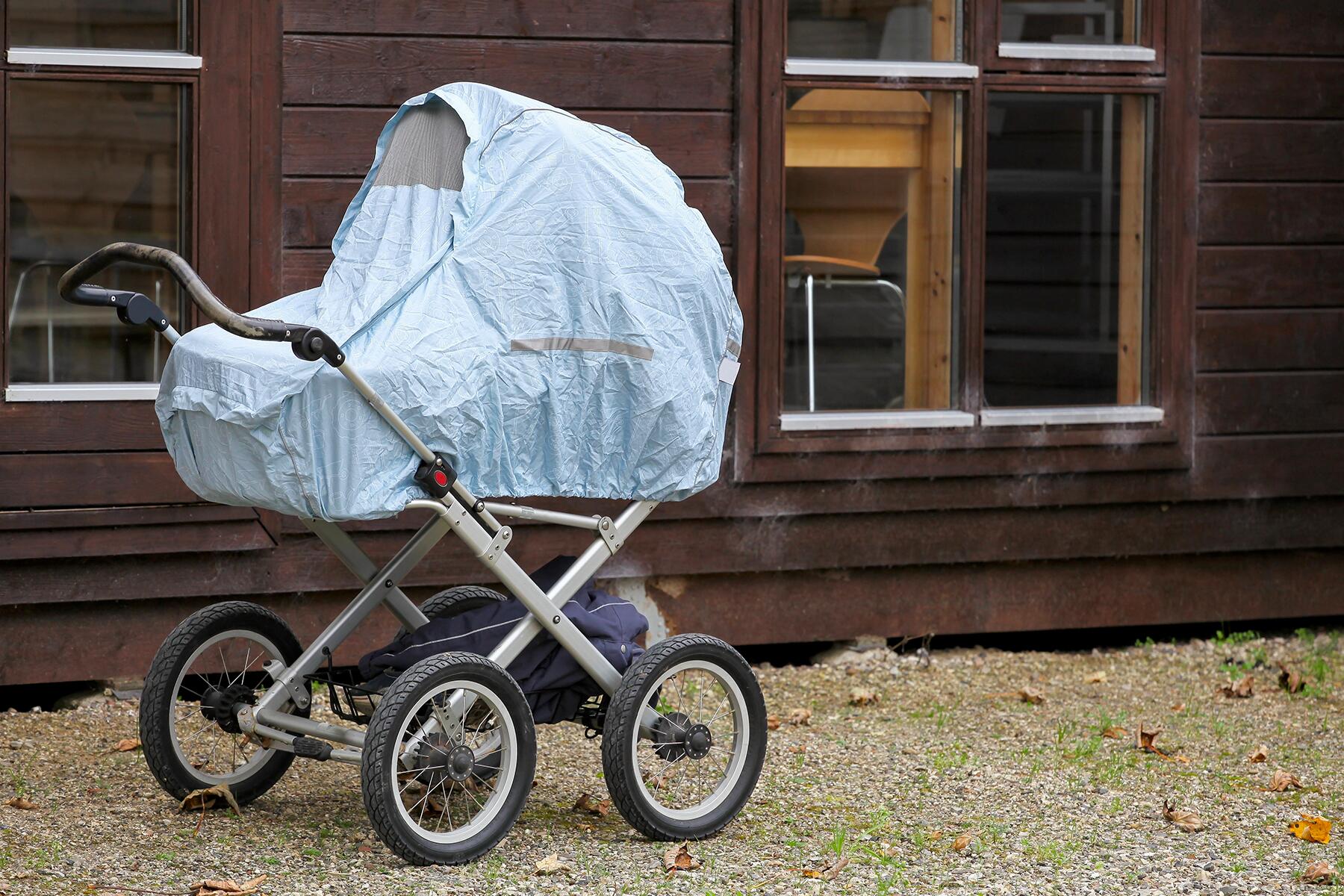 WHERE: Finland and Other Nordic Countries

Nordic countries are especially known for their short days and low temperature during winter months, so their residents have discovered innovative ways to adapt to the outdoors—whatever the season. This includes things like jumping into ice-cold lakes, cross-country skiing through city parks, and allowing their babies to nap outdoors. In fact, in places like Denmark and Finland, mothers find that the crisp, fresh air lulls their little ones to sleep much more easily, ignites their appetites, and even inspires better z’s. One Finnish study noted that parents found an acceptable temperature range for some solid napping is between -16 and 41 degrees Fahrenheit. 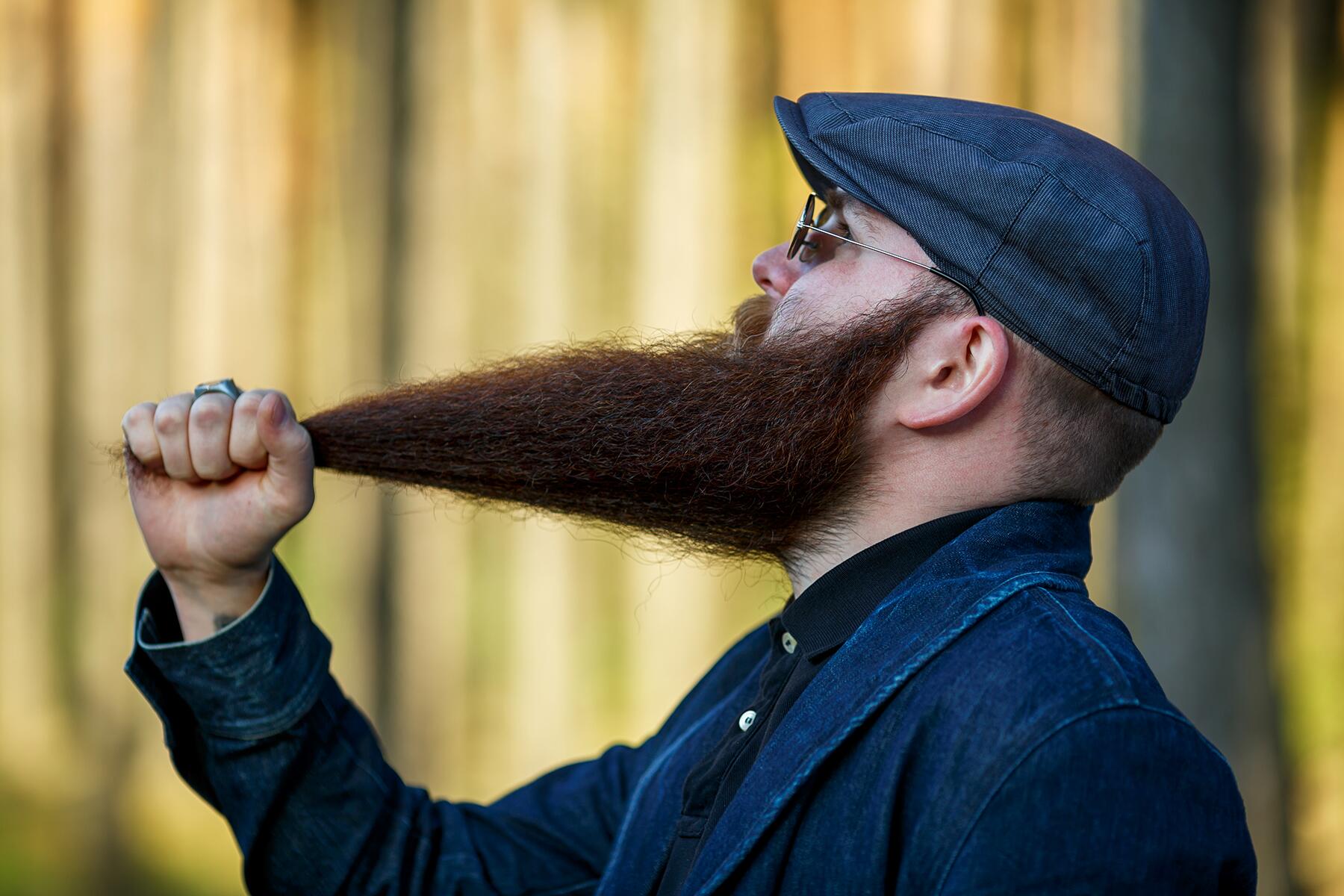 Beards are wild, rustic, and even sometimes sexy. They’re also a big part of Winnepeg’s Festival du Voyageur, a 10-day celebration that began in 1969 in Winnipeg as a way to celebrate the region’s French heritage and fur-trading past, which began as early as the 1500s. The festival’s beard-growing competition is one of its longest-running and most beloved events, with all lengths, styles, and shapes welcome. Most of the time, the crazier, fluffier, and curlier, the better. Contestants can choose between four distinct categories, including novelty bears (in which groomed mustaches are a welcome part of the ensemble), clean-shaven (in which participants are given the eight weeks before the festival to grow the most awesome, most delightful, and dazzling beard imaginable), and open (meaning entrants create their own “beards” using whatever beads, baubles, and other extraneous materials they have on hand). 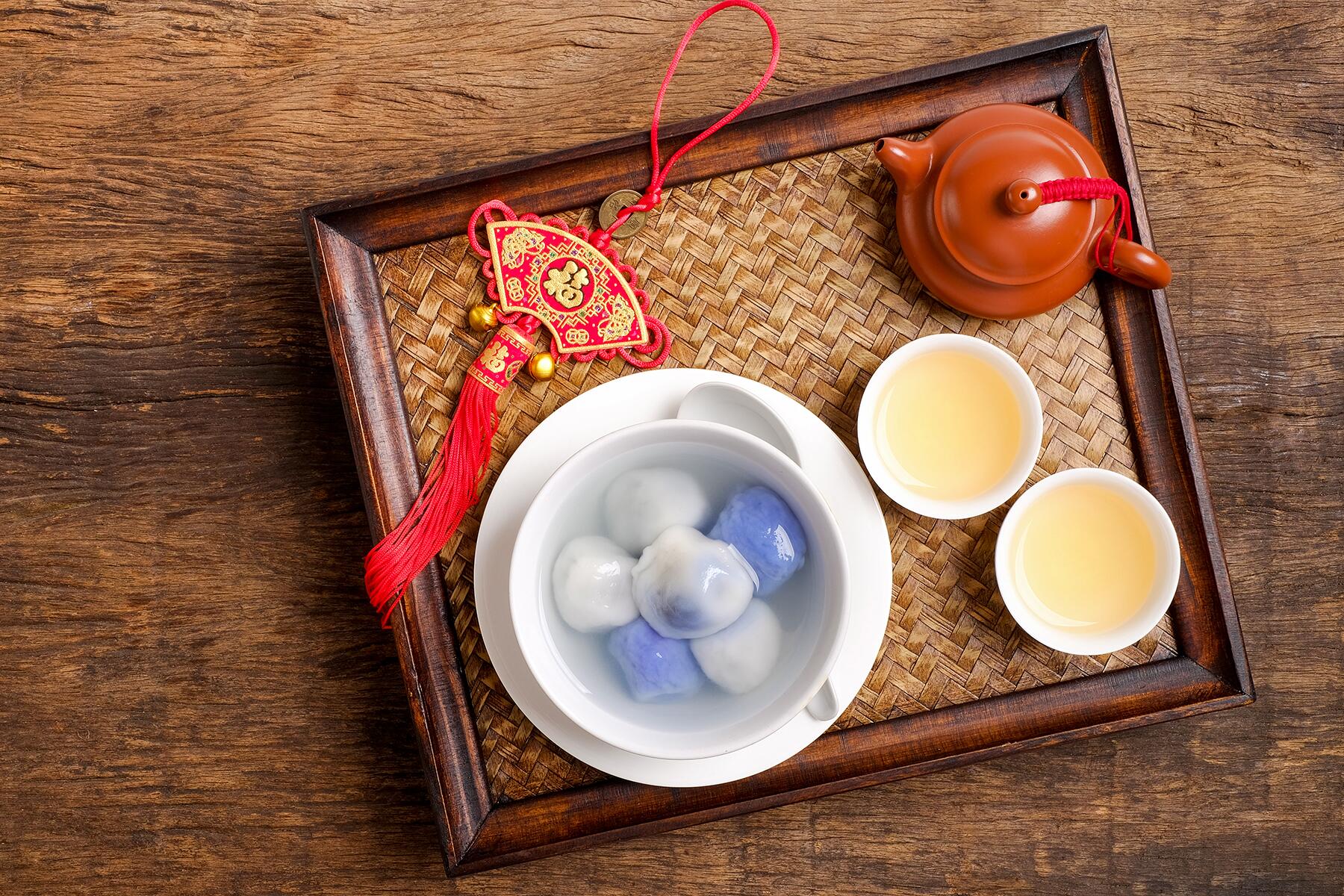 Both China and its East Asian neighbors, including South Korea and Japan, mark the annual Winter Solstice (aka the year’s shortest day) with Dongzhi, a major festival celebration that dates back thousands of years. Every country and region has its own Dongzhi customs and traditions. This includes Tawain, where residents dine on hot pots filled with mutton or duck to fight against colds and replenish their bodies for the coming year. Tangyuan, which are glutinous rice flour dumplings served up in a sweet soup, are another traditional favorite: a yang (warm) to help ward off the season’s yin (cold). As in most places that celebrate Dongzhi, Taiwan’s festivities are a day of family gatherings and honoring ancestors, which often means giving deceased family members an offering of food. 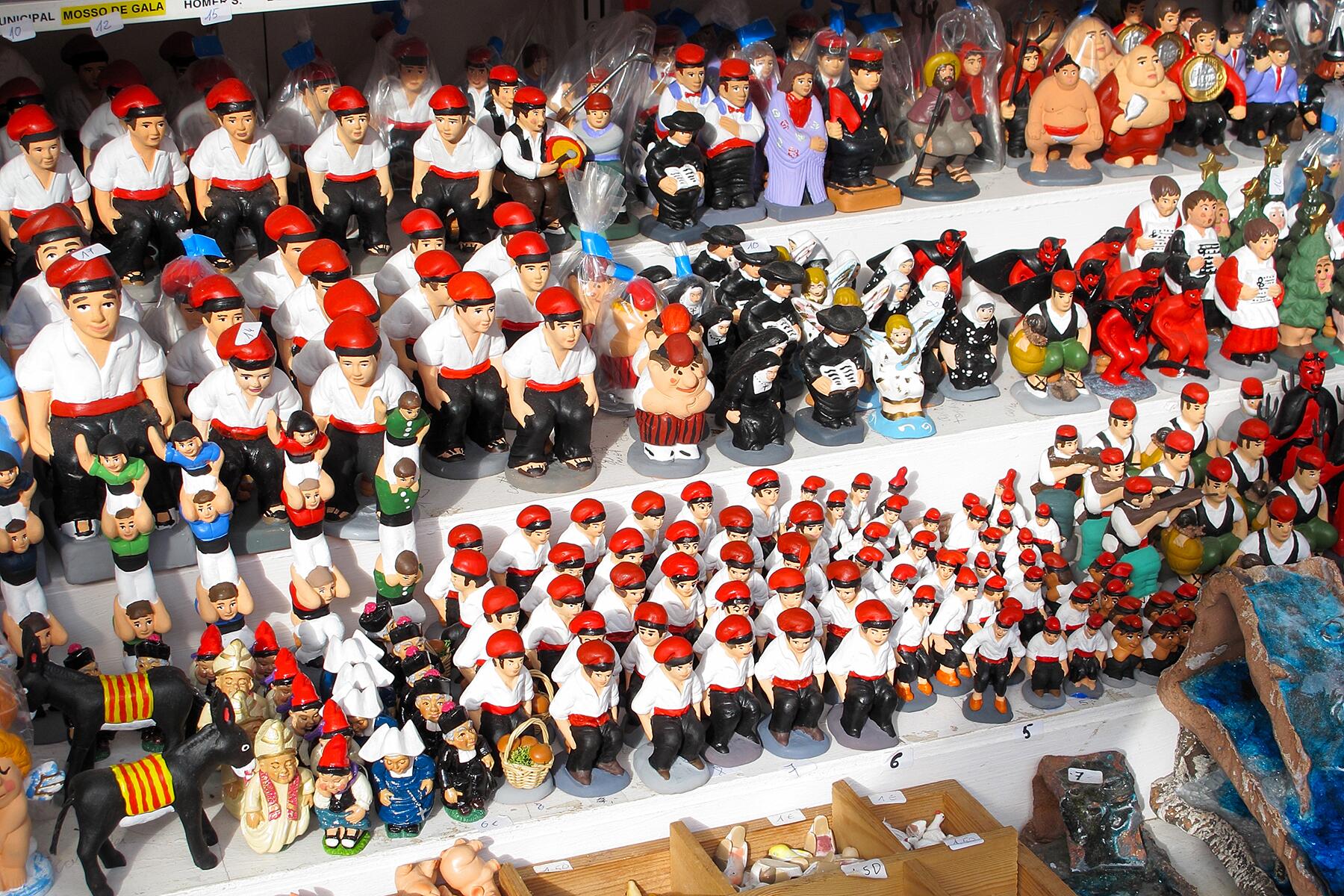 Anyone looking closely at the large Nativity scenes throughout Barcelona might be surprised to see an unusual figure, one typically hidden away in a corner with his pants down and a pile of poop behind him. This is what’s known as El Caganer, or “the crapper,” and he’s been a part of the city’s Bethelem-inspired displays since at least the early 18th century. Although no one really knows its origins, there are several guesses. Some people believe he’s there to fertilize the earth, others that the defecating figure represents good luck, or perhaps it’s the fact that we’re never entirely prepared for what’s to come. While traditional El Caganers were depicted as male and either farmers or shepherds, more modern versions are based on everyone from Greta Thunberg to Deadpool. There are even Smurfs, Dali Lamas, and of course, plenty of Donald Trumps.