These fun, colorful celebrations in Nigeria will give you an insight into past traditions and modern culture.

Celebrations are very much a part of the Nigerian culture, carried out with a lot of pomp and pageantry. Festivals are a way to showcase the country’s rich cultural heritage as well as the traditions of various ethnic groups in Nigeria.

These festivals and carnivals feature music, dances, fashion and food, giving visitors the opportunity to join in and have a first-hand experience of Nigerian culture. Along with major traditional festivals across Nigeria, there are also modern festivals, which have become a platform for younger generations to express themselves. Here’s how you can get to know this country through music, dance, and food. 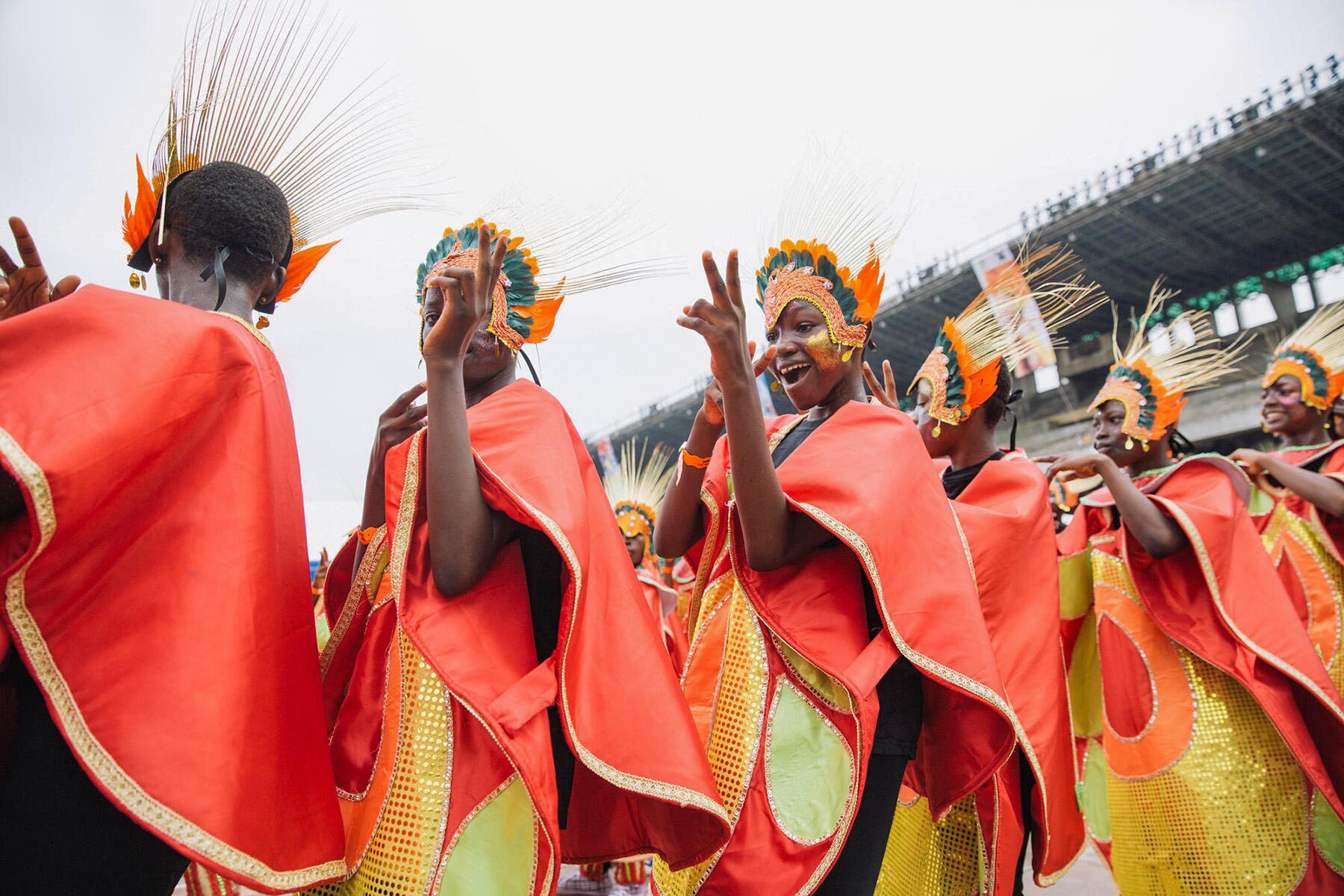 The Lagos Carnival is the most prominent carnival in West Africa and is held during the Lagos Black Heritage Festival. The Carnival was introduced over a century ago by “emancipados” (emancipated slaves) and their descendants from Brazil, Cuba and West African countries such as Sierra Leone and Liberia. The returnees brought with them vibrant carnival culture which evolved over time to become what is now known as Lagos Carnival. The event showcases the culture of Lagosians with colorful fashion, music and dances through the streets. Traditional rulers also come out in their regalia to add radiance to the occasion. 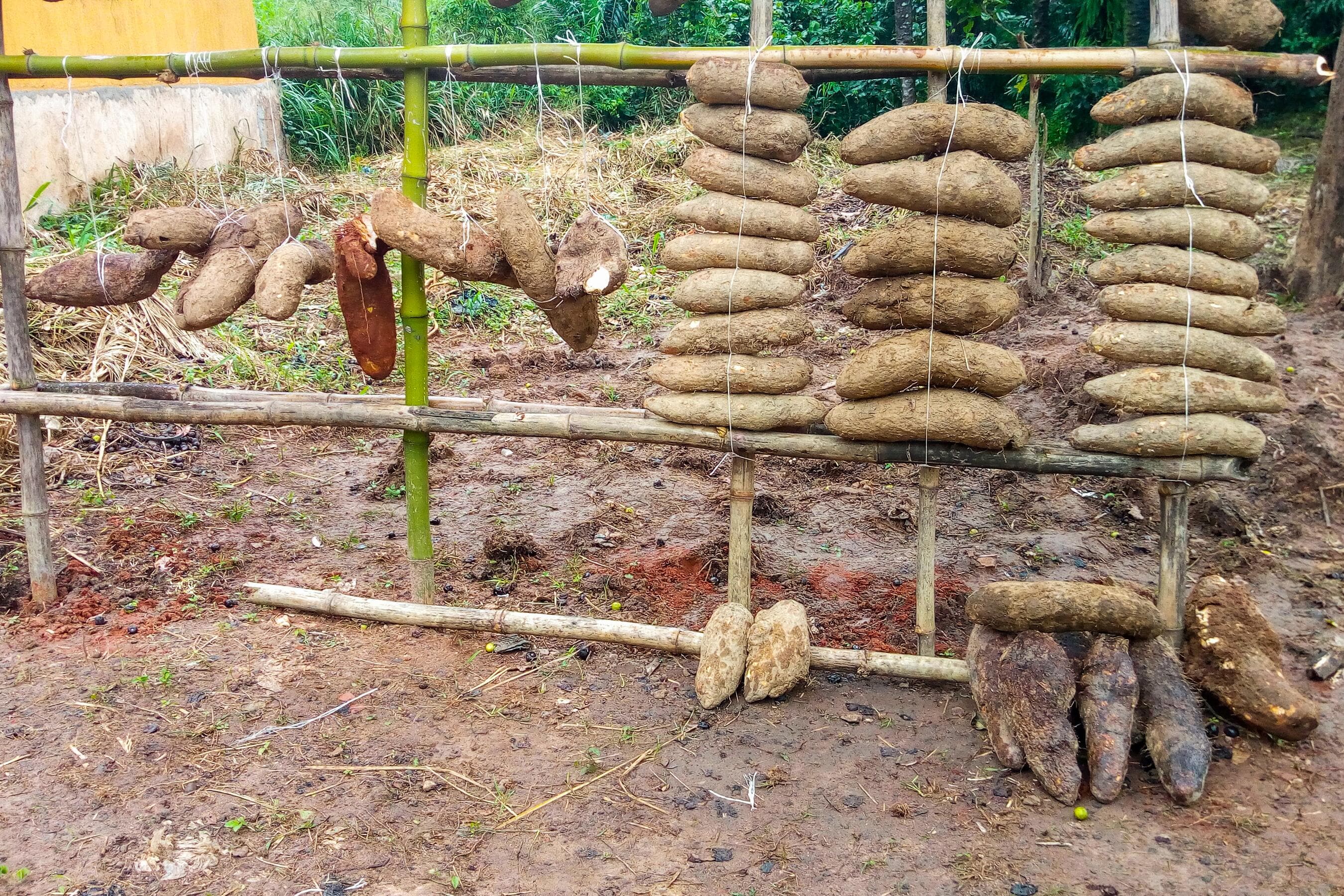 The New Yam Festival is an integral part of Igbo culture and tradition, where yam is regarded as the king of all crops. The festival marks the time of harvest and the beginning of a new planting season, usually between August and October. Old yams are eaten or discarded before the festival and new yams are consumed on the day of the festival, in the form of various yam dishes. Festivities usually last for a week or more in some areas and include prayers to be offered by the King or the eldest man in the community, masquerade dances and contemporary events such as fashion shows and beauty pageants. 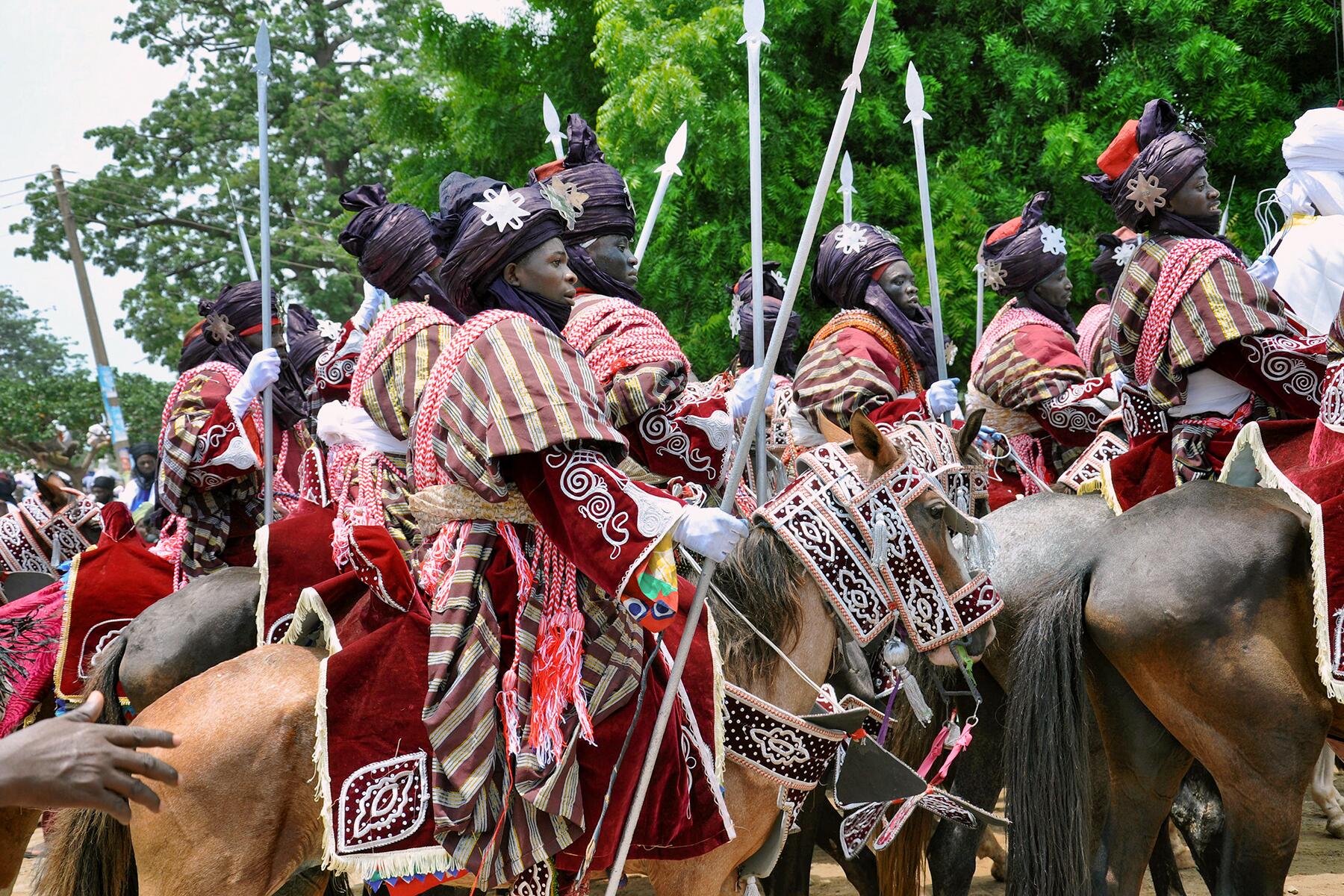 The Durbar Festival, known as Hawan Daushe in the Hausa language, is celebrated twice annually as part of the festivities at the end of the Ramadan and Eid-ul-Kabir in most of the northern states in Nigeria. A long line of horsemen in colorful regalia form a procession into the parade ground, with the Emir (the traditional ruler) being the last horseman, dressed in royal robes. Visitors can watch horsemen prance or gallop about on their horses while brandishing swords—a display of valor to honor the Emir. Apart from horses, other animals are also adorned and displayed during the Durbar, including baboons, hyenas, and camels. Traditional dances and drumming sessions with trumpets and flutes go on throughout the event. Visitors can also watch jesters, acrobats, and stunt performers and try an array of local foods and snacks for sale. The highlight of the Durbar is the Jahi race, where several horsemen race towards the Emir at top speed and abruptly turn aside just before reaching him, and raise their sword or flag before exiting the race.

INSIDER TIPThe Durbar offers a lot of photo opportunities, so take a camera along or make sure your phone is charged. Some of the horsemen will allow you to take their pictures or even take pictures with you—but always ask for permission first. 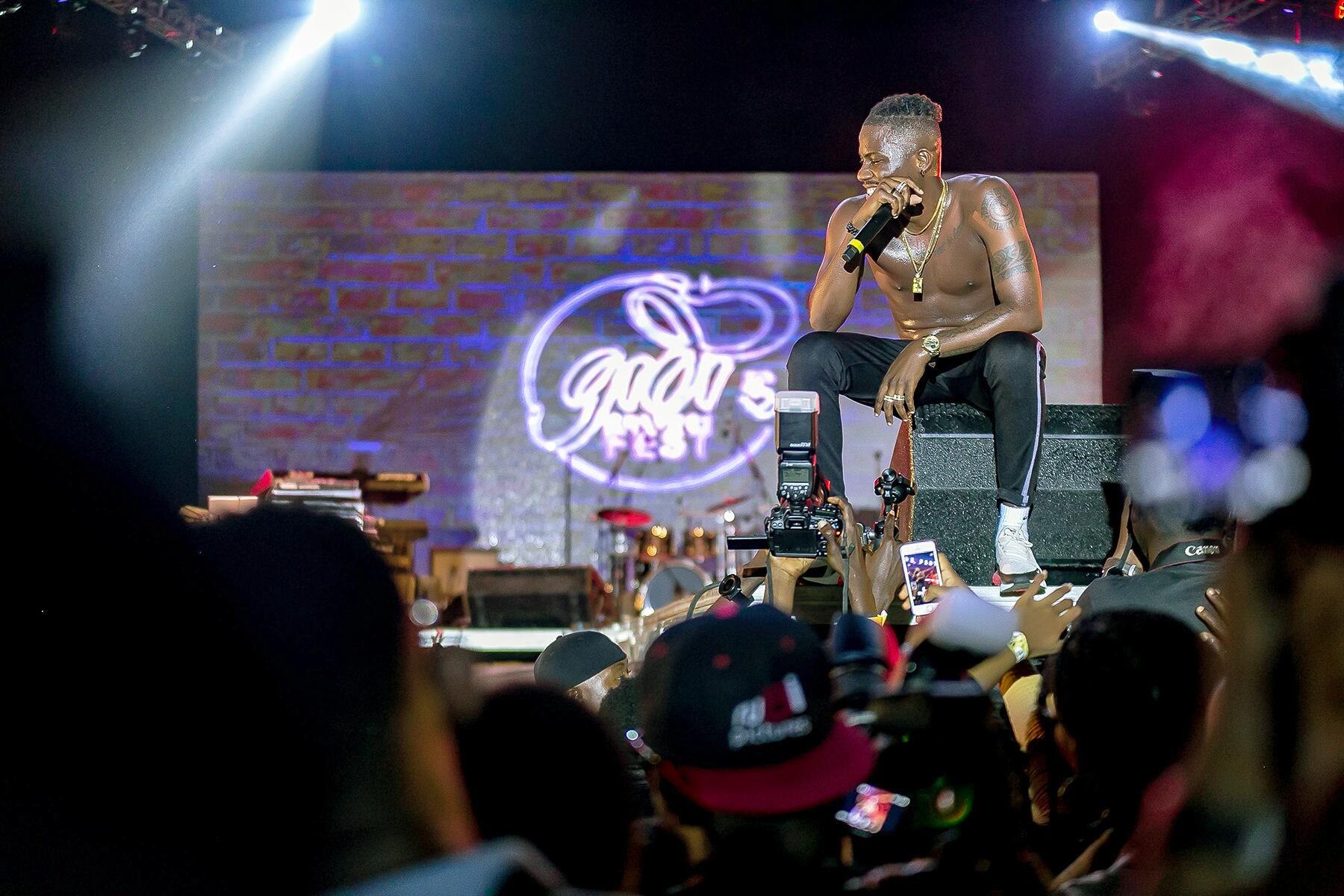 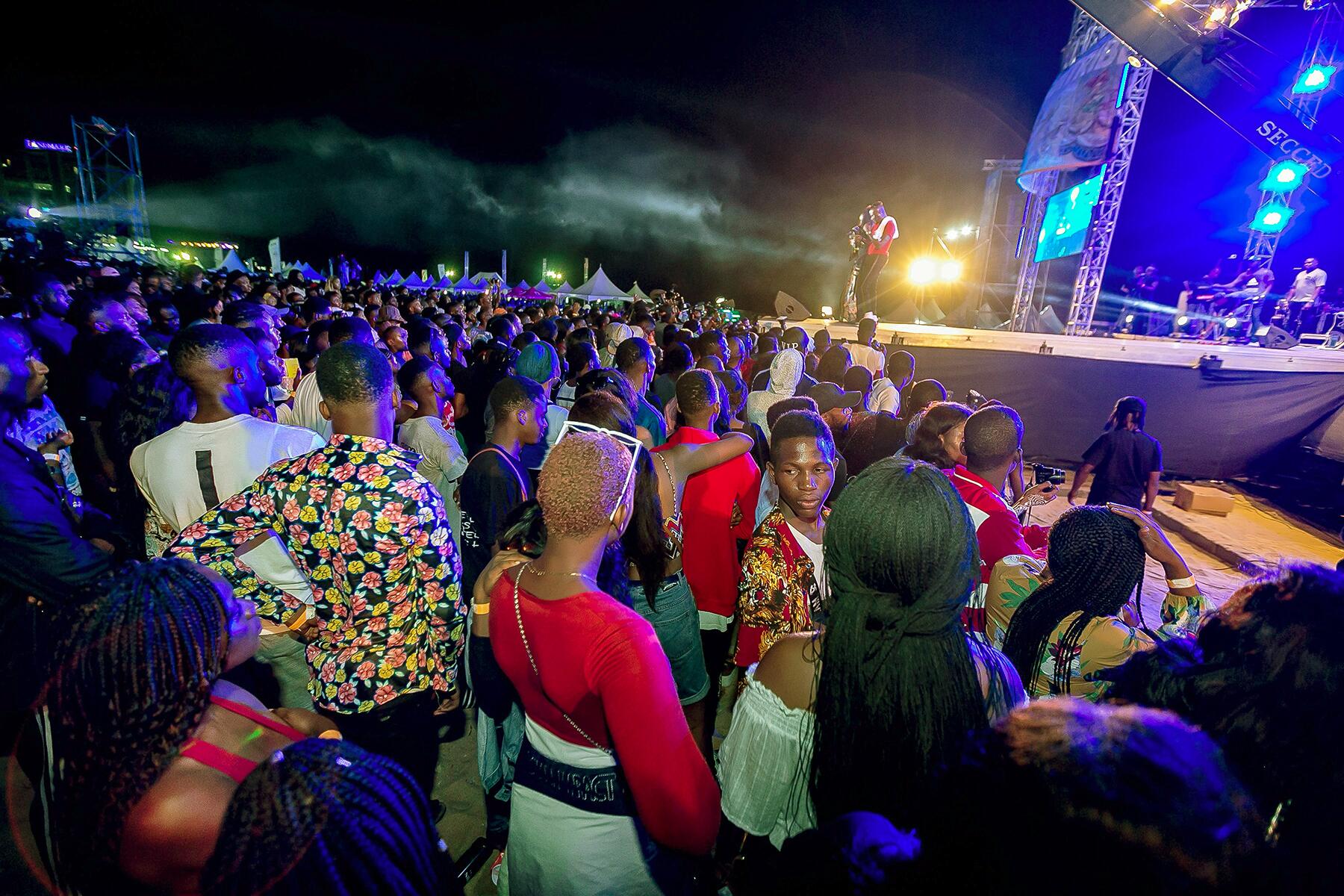 PHOTO: Courtesy of The Gidi Culture Festival
Previous Next
4 OF 12

Gidi Culture Festival celebrates urban youth culture, expressed in music, food and games. The one-day festival creates the opportunity for both established and up-and-coming bands, DJs and musical acts to perform. The festival is an offshoot of the now-defunct Lekki Sound Splash—the main act included Fela Kuti—Gidi Culture Fest had its first edition in 2014 with musicians from Nigeria and since then, artists from Ghana, Kenya, South Africa, Congo and the United Kingdom have performed at the event. Gidi Culture Fest is held every year at Easter, usually on Saturday. 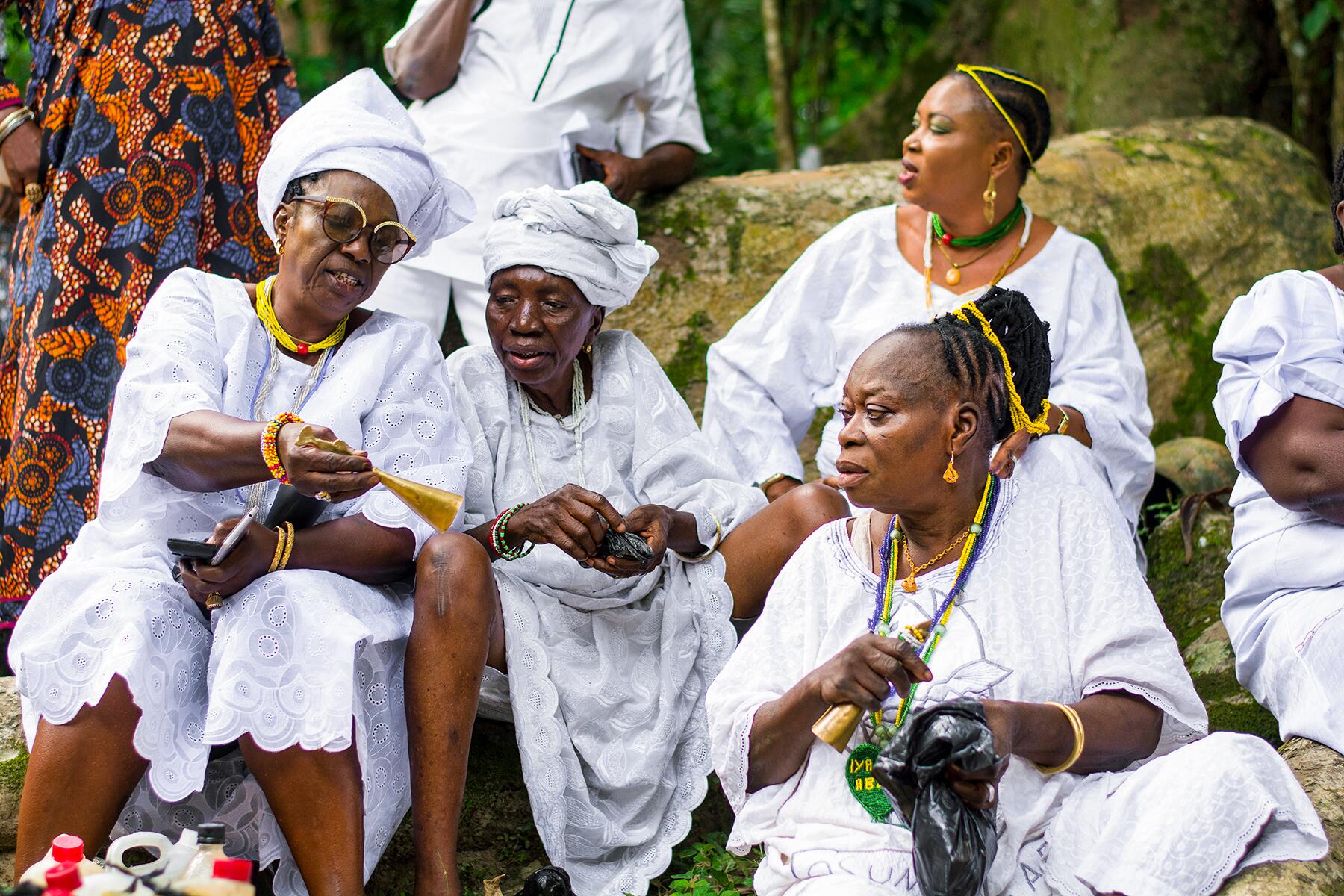 The Osun Festival is an annual celebration in honor of Osun, the Yoruba goddess of fertility. The festival, which is held in the month of August, has attracted thousands of visitors from different parts of the world for decades. The festival is usually twelve days long and takes place at the Osun Sacred Grove, a dense forest which houses sanctuaries, shrines, sculptures and artworks in honor of Osun and other deities. The Osun River, which is said to have healing powers and believed to be where the goddess resides, runs through the forest. The major highlight of the event is when the Arugba (Carrier of the Calabash) carries the sacrifices and offerings (usually food items) of the people from the Oba’s palace to the Osun Riverbank in the presence of the people. The festival also features various masquerades and dances by several groups of devotees in different attire.

INSIDER TIPWhile you are in Osogbo, you can visit the house of the late Susan Wenger, the Austrian-born artist who became an Osun priestess and died in Nigeria. There are a collection of carvings which she made, as well as works by the artists she trained in her lifetime. You can also see her artworks at the Osun Grove. 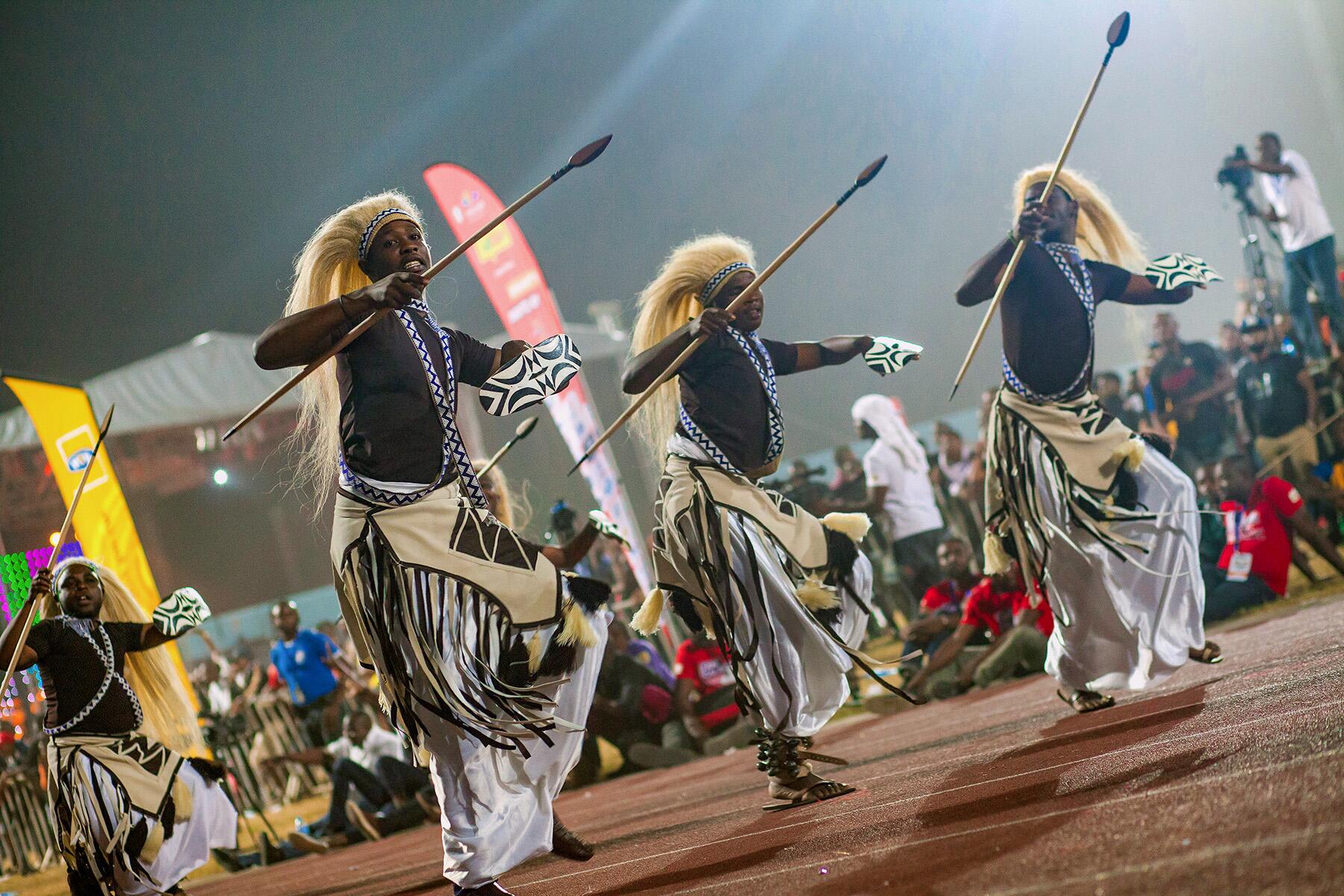 Dubbed Africa’s largest carnival, Calabar Carnival is a must-see event for visitors and tourists. The carnival began in 2004 as a means of attracting tourists to the city of Calabar with a month-long event featuring displays of African culture through music, dance, drama, and fashion, all in an explosion of bright colors. The event attracts thousands of visitors from all over the world, both as participants as well as spectators.

INSIDER TIPIt’s important to book hotels well ahead of time. Hotels in and around Calabar are usually fully booked by the time the Carnival begins. 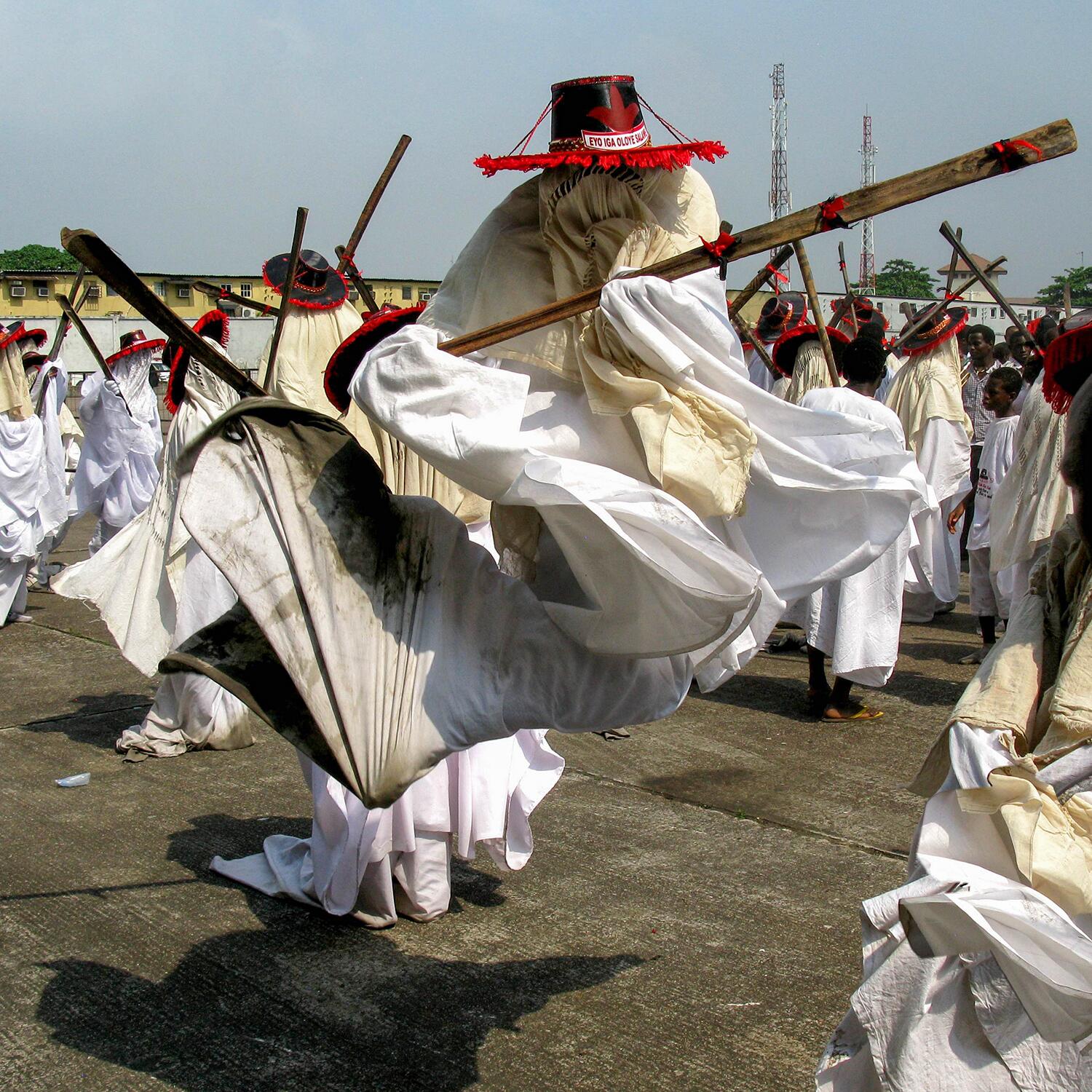 Eyo Festival, also known as Adimu Orisa, is a masquerade festival in Lagos. It’s believed by some that the masquerade takes away sickness and poverty, bringing wealth and longevity. There are several versions of the history of Eyo—some claim it originated from Ijebuland (in southwest Nigeria) as a result of the marriage of a King of Lagos to an Ijebu princess, while others say the Eyo deity was sought out by an Oba of Lagos so that his younger sibling could have children. The Eyo masquerade represents the spirits of ancestors and it was originally seen at events like the burial or coronation of an Oba or high chief. It has since become a major festival and tourist attraction in Lagos. Eyo masquerades can be seen mainly in Lagos Island (Isale Eko) during times of celebrations.

Eyo masqueraders are unique for their characteristic head-to-toe white regalia and the decorated wide-brimmed hats of different colors that show which group a particular Eyo belongs to. There are several Eyo groups; Eyo Adimu (the most senior Eyo, Black), Eyo Laba (Red), Eyo Oniko (Yellow), Eyo Ologede (Green), Eyo Olokun (White) and Eyo Agere (Purple). Eyo masqueraders always carry a staff called an opambata, which is used to ward off undesirable forces. On the day of the festival, the Eyo masqueraders march out in groups from their Iga (a type of palace) to the Agodo (shrine) and the procession, which is accompanied by drummers, is witnessed by spectators who line the streets.

INSIDER TIPActivities prohibited during Eyo festival include smoking, riding motorcycles or bicycles, and wearing sandals (visitors are expected to remove their shoes when the masquerades approach). Men and women must leave the head bare during the festival and those carrying umbrellas must leave them unopened.

The Lagos International Jazz Festival, known as LIJF, is a three-day festival held during the week of International Jazz Day (April 30). Though it caters first and foremost to jazz musicians and lovers, the festival has been extended to other forms of mainstream music in recent years. Grammy award-winning artists who have performed at LIJF include Lekan Babalola and Jermaine Jackson. The event is usually held at Freedom Park on Lagos Island. 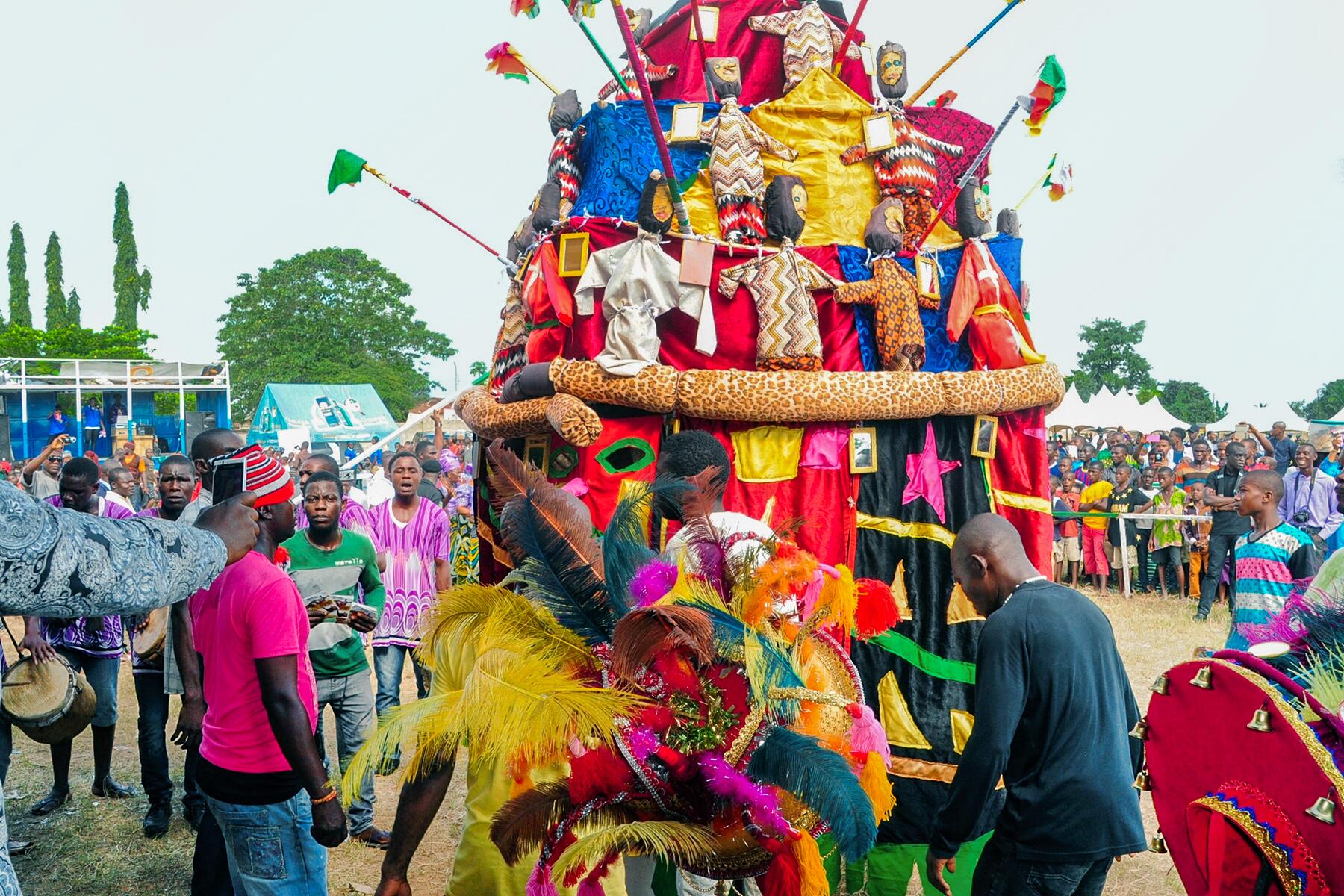 Ofala Festival is an annual ceremony practiced by Igbo people of southeastern Nigeria. This colorful cultural festival is held at the palace of the Oba (traditional ruler). It’s a celebration of the authority and legitimacy of the ruler and it is usually held on the anniversary of his ascension to the throne or in some places, at the climax of the New Yam Festival, which is the celebration of the year’s harvest. Ofala is an avenue for the traditional ruler to appreciate his subjects’ loyalty and socialize with them. Highlights of the festival include people coming to pay homage to the King with gifts, cultural dances, and local feasts. The Ofala Festival attracts locals and visitors from around the world. 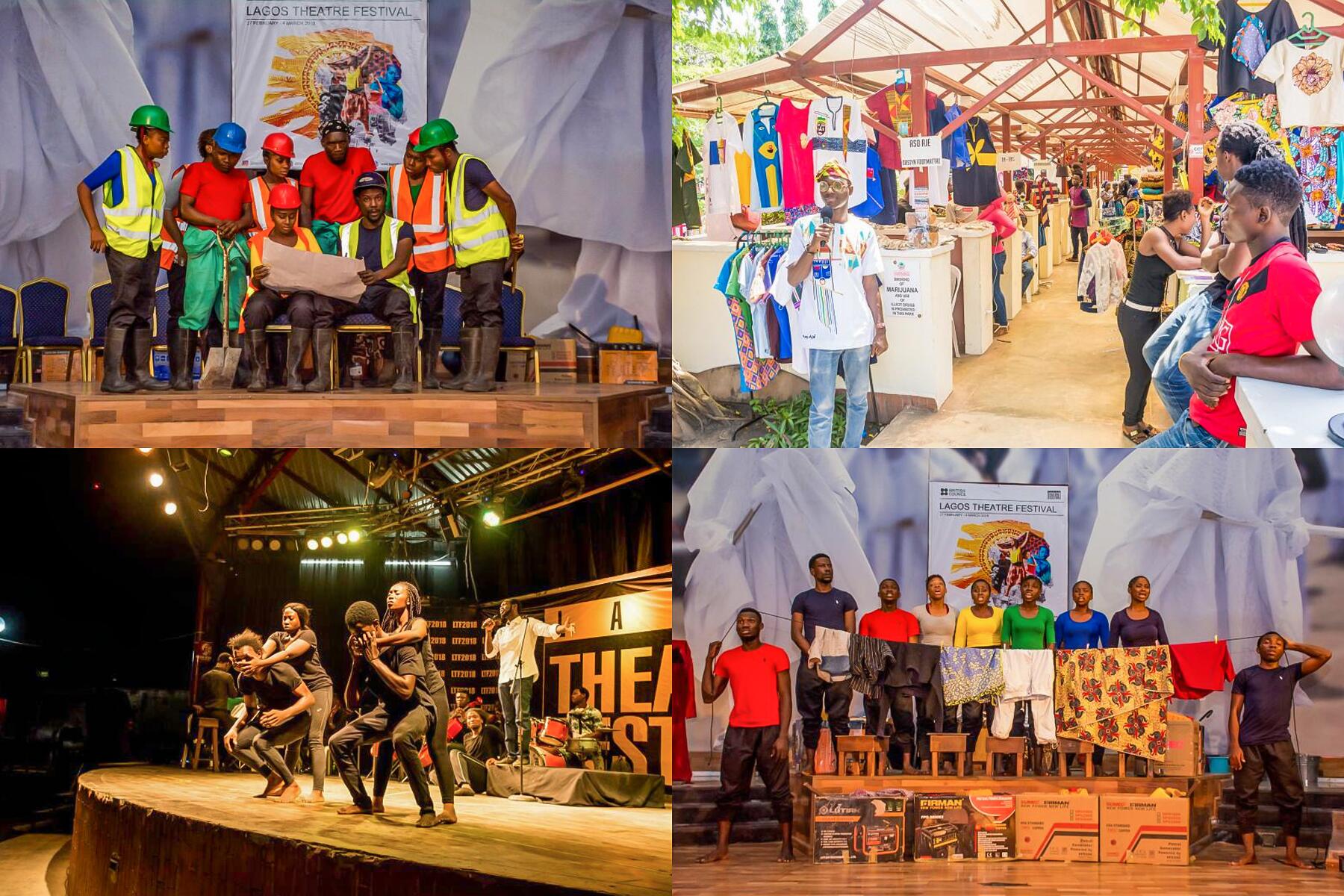 It’s aimed at promoting the presentation of theater in unconventional spaces, enabling theater makers to expand their work to any given arena. The 2019 festival, which took place at Freedom Park, showcased about one hundred performances by more than six hundred artists. Presentations at the festival included Ogun Skugga, an adaptation of Wole Soyinka’s novel, The Man Died. 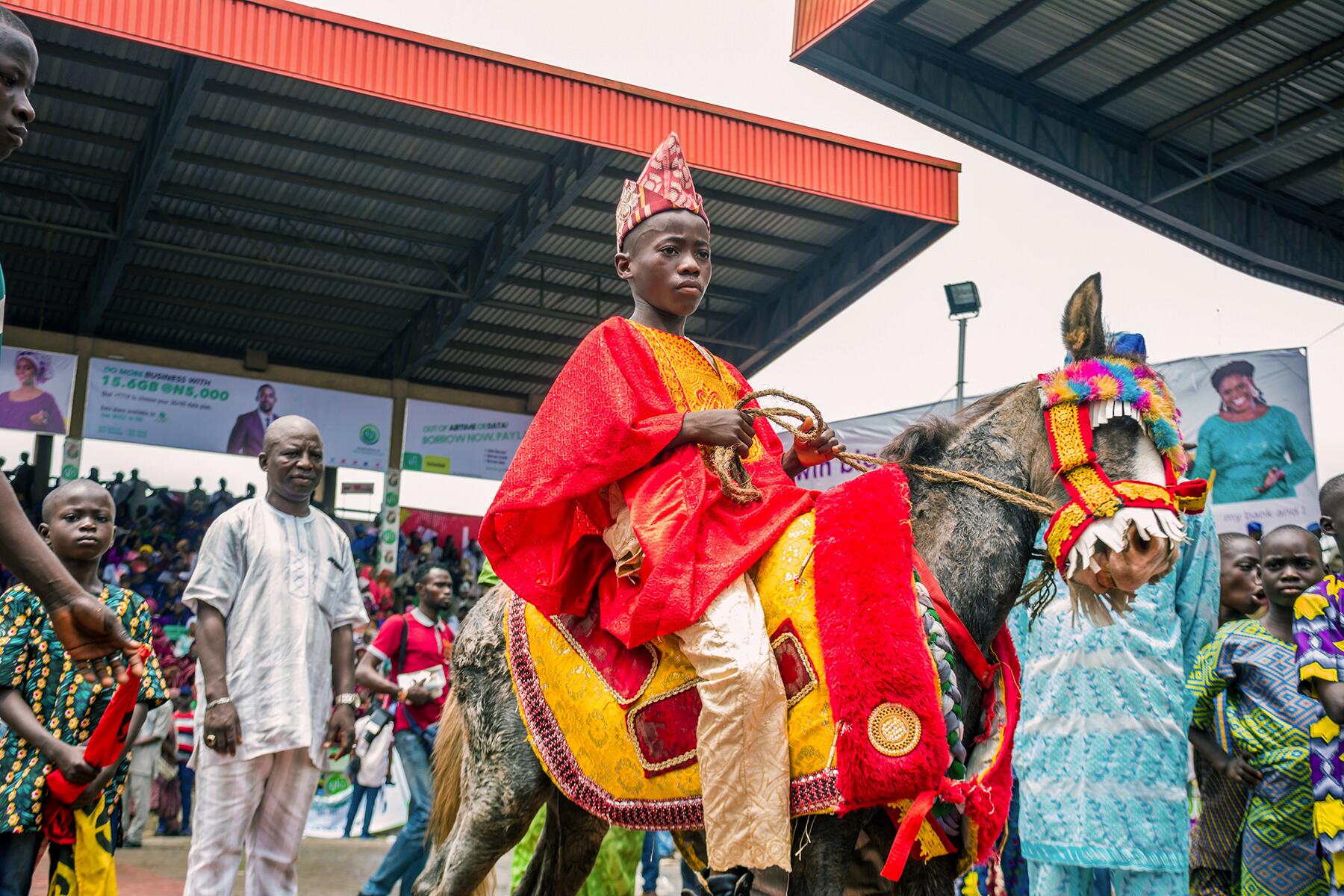 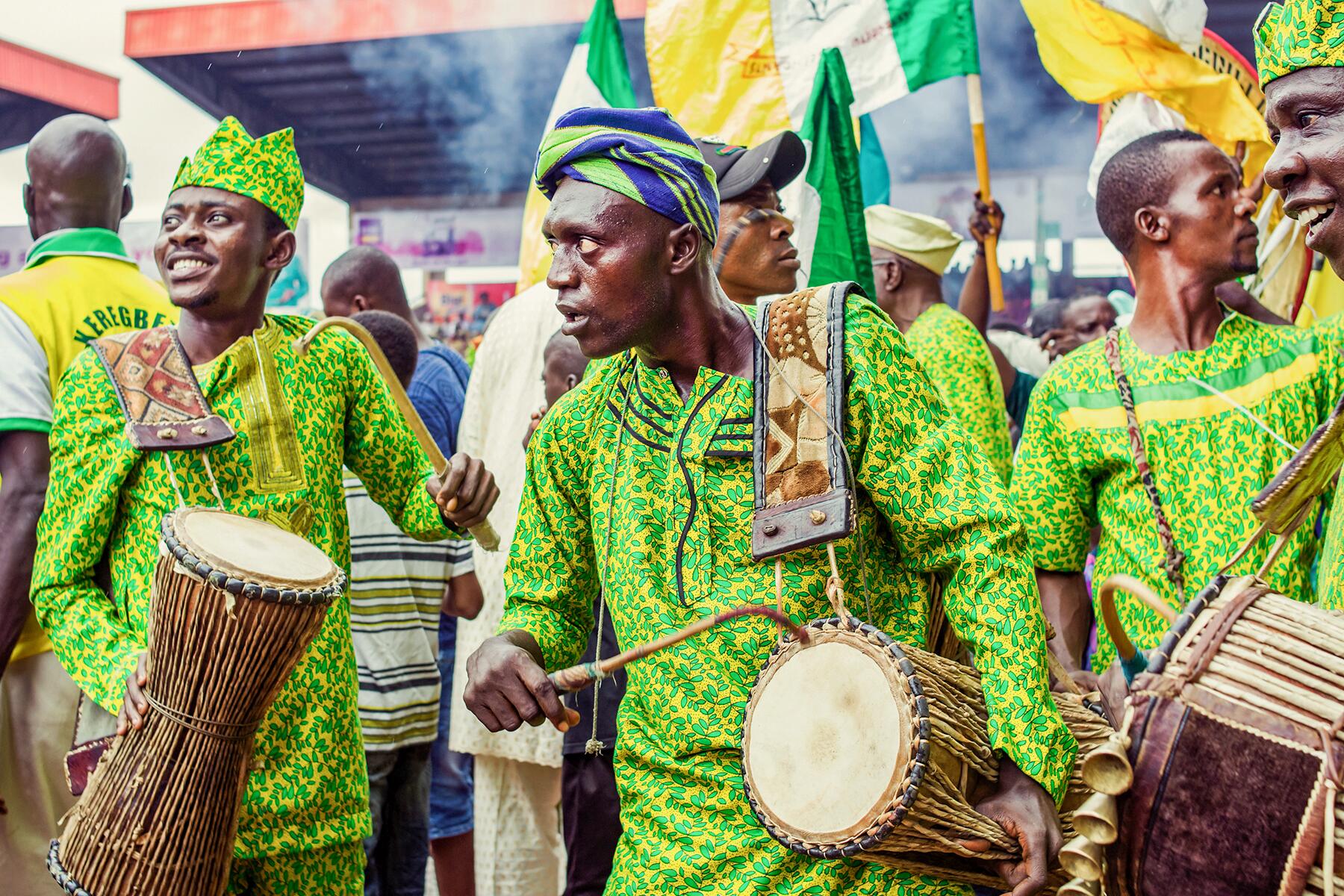 PHOTO: Ajibola Fasola/Shutterstock
Previous Next
11 OF 12

Ojude Oba, which translates to “king’s front yard,” is a cultural festival observed in honor of the Awujale, the paramount ruler of Ijebu-Ode in Nigeria. The festival was first held in 1892 when the Awujale gave land to Muslims to build a mosque. He also offered land to British missionaries where the first church in Ijebu was built. Though the festival started out as a religious festival for Muslims (it is held on the third day of Eid-el-Kabir), it is now observed by most Ijebu people. It attracts tourists due to the extravagant celebrations and partying, including dances by different groups in matching traditional attire. The major attractions at Ojude Oba are the display of horses by warriors, colorful traditional attire worn by various groups, beauty pageants, and music by Nigerian artists such as Ayinde Marshall K1 and Burna Boy. 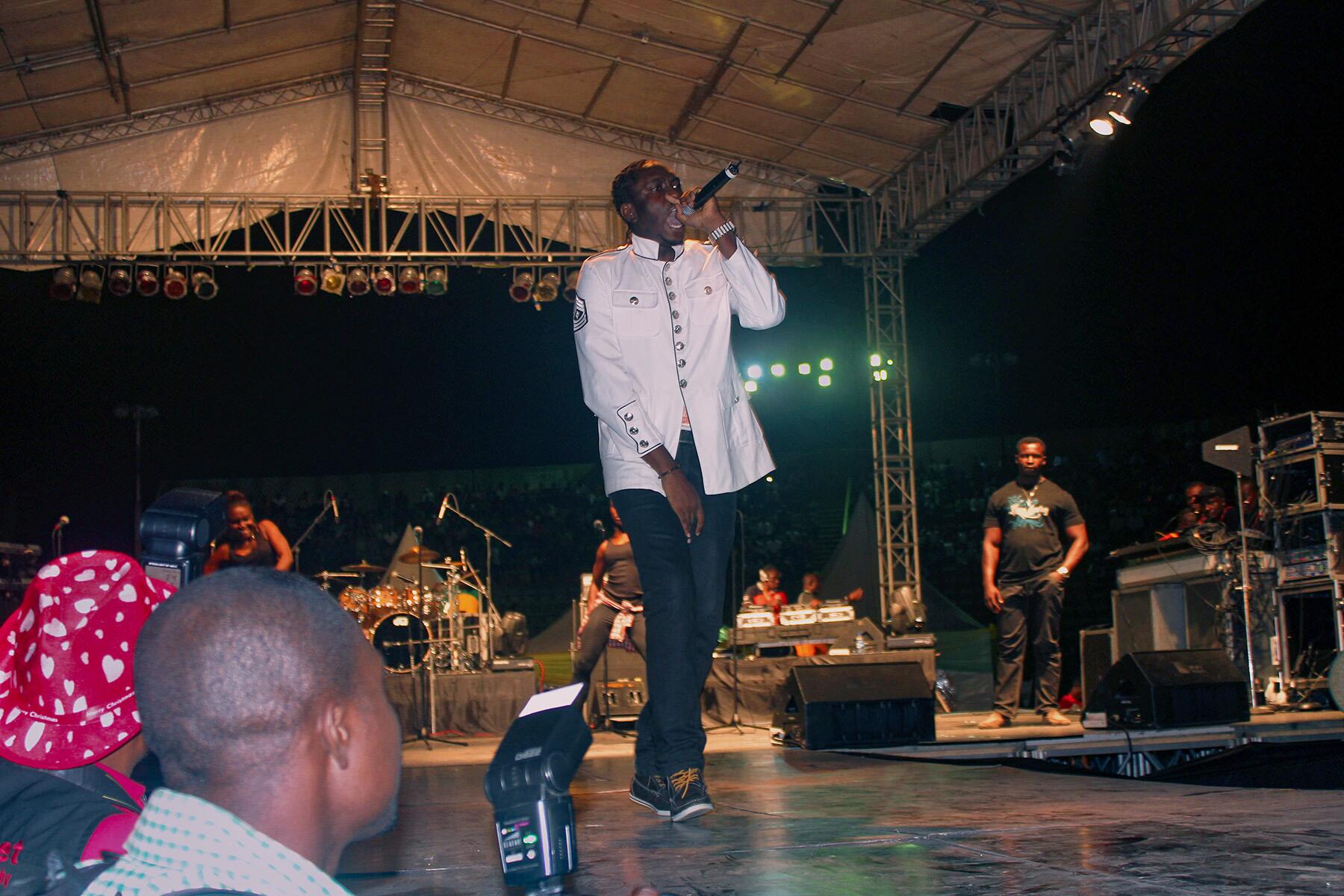 Rivers State Carnival, also known as Carniriv, is an annual event that showcases the cultural heritage of the people of Rivers State, Nigeria. The Carniriv is unique for its fusion of two different types of carnivals: the traditional, which displays the culture of various indigenous groups in the state and the contemporary, a Caribbean-style carnival. Rivers State, known as the land of a thousand masquerades, is a melting pot of various cultures whose collective heritage produces a rich and entertaining event. The parades at the Carniriv include the Garden City Freestyle Parade, the International Heritage Parade, and the kids’ carnival. The event is held every December and features both local and international musicians.