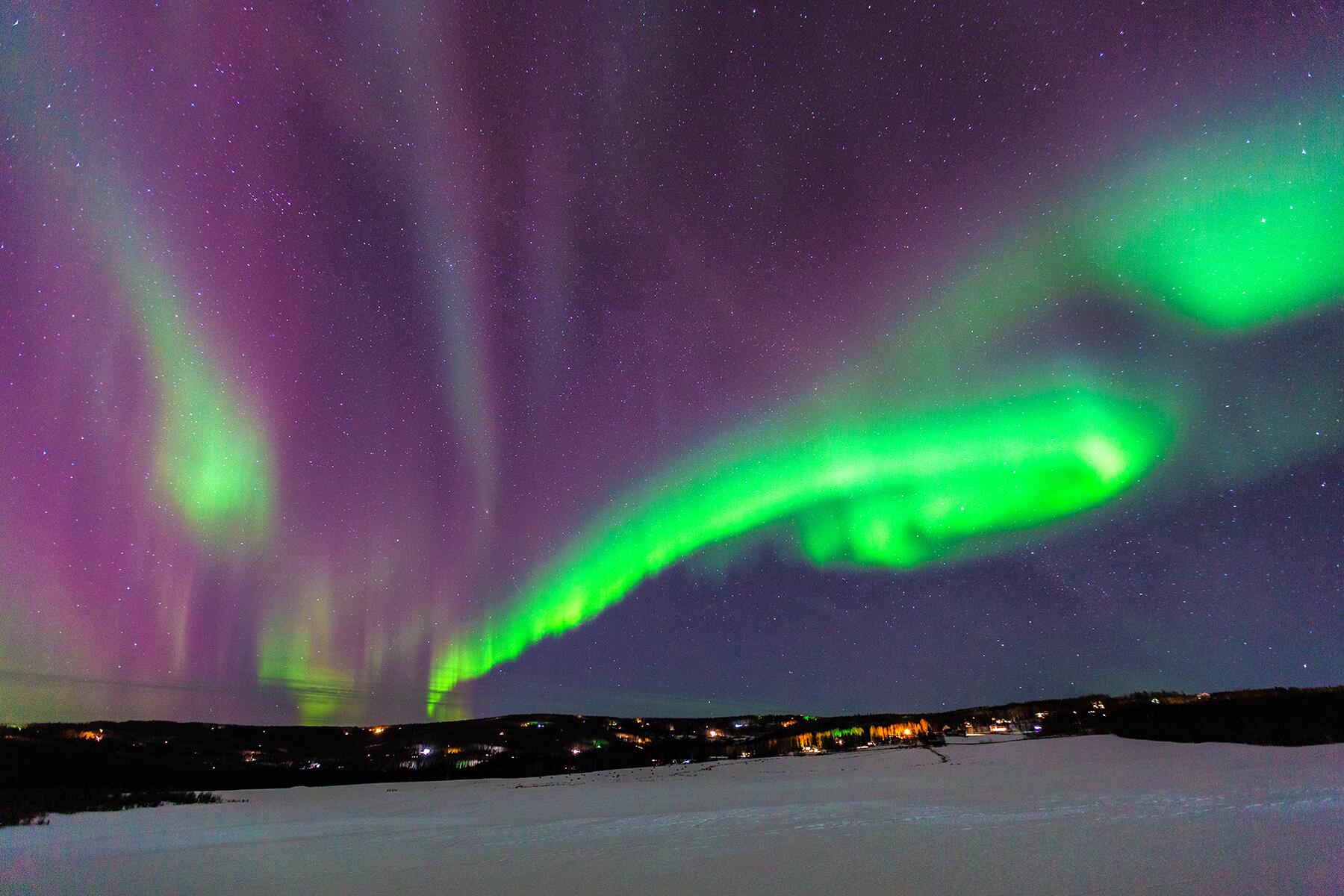 Outdoors Kay Kingsman The Best Places to Visit and Visibly See the Northern Lights in the U.S.

From floating in the Dead Sea to witnessing the breathtaking majesty of Petra, here’s why Jordan is the adventure capital of the Middle East.

Although a small country, Jordan is home to a multitude of otherworldly desert landscapes–and unique ways to explore them. From ancient cities carved into cliffs to towering limestone monoliths and the lowest point on earth, almost every corner of this country is full of adventure. The best part? You don’t have to be a professional rock climber to experience it.

Outdoors Kay Kingsman The Best Places to Visit and Visibly See the Northern Lights in the U.S.
1 OF 10

Near the Dead Sea, Wadi Mujib is part of the lowest nature reserve in the world. A slot canyon with steep cliffs and an incandescent blue river, Wadi Mujib’s natural beauty is absolutely breathtaking. A full day spent exploring the canyon means hiking, swimming, abseiling, or rappelling down cliffs and waterfalls, and zipping down natural water “slides”–smooth rock formations that have been carved by water over the years. And while this may seem like an expert sport, it’s much easier than it looks and you don’t need to be an expert swimmer to have fun here. Go with a recommended tour operator like Experience Jordan, and they’ll set you up with all of the equipment you’ll need.

INSIDER TIPYou will get wet. Make sure to wear waterproof shoes that you can hike in and bring a waterproof camera to document your journey.

There is nowhere on earth quite like Wadi Rum, although it does have some similarities with other planets in our Solar System. Dramatic sandstone cliffs rise from bright orange dunes, while odd mushroom-like formations dot the landscape. The rust-colored desert here is simply awe-inspiring and while you can go hiking and rock climbing or ride camels and ATVs, the most rewarding activity here is just taking it all in. The desert feels prehistoric, as if a dinosaur might appear at any moment. Visitors should spend a night or two here, and camps like the space-age Sun City can organize desert tours by foot, car, bike, camel, and ATV.

INSIDER TIPWadi Rum might look familiar to you–it’s been used as a stand-in for Mars in a few Hollywood blockbusters like The Martian. 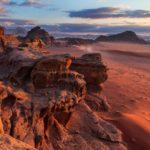 In the Red Sea, the Gulf of Aqaba borders four countries: Egypt, Israel, Jordan, and Saudi Arabia. The dark blue waters meet the desert in a spectacular piece of scenery and underneath the waves, coral reefs thrive. The coral in the Red Sea is a special variety that’s tolerant of high temperatures. Consider that alongside particularly good water visibility due to the lack of river runoff in the region and you’ve got an opportunity to experience one of the world’s most biodynamic underwater ecosystems with front-row seats. Waterfront hotels in Aqaba like the Kempinski can help organize half-day or full-day scuba and snorkeling tours, or you can visit Berenice Beach Club for a day of water sports and adventure.

INSIDER TIPAqaba is right next to Eilat in Israel. The border crossing is easy for Americans (not so much for Jordanians or other nationalities), so you can walk over to Israel for dinner with no hassle.

In 2018, Jordan unveiled their greatest adventure yet, and one that’s unparalleled in the region: the 650-kilometer Jordan Trail. The trail is both a natural and cultural pilgrimage, starting in the ancient Roman town of Umm Qais in the north and continuing south to the Red Sea. The entire trail takes 36 days to complete and winds through some of Jordan’s greatest hits, like Dana Biosphere Reserve, Wadi Rum, and Petra. If you don’t have 36 days to spare, but you’d still like to get in on the action, you can hire an outfitter like Experience Jordan to take you on one of the most popular legs of the journey–the Dana to Petra hike, which takes five days.

Explore the Roman Ruins of Jerash

Not all adventures have to be death-defying feats of human endurance, and a trip to Jerash should not be overlooked on any Jordan itinerary. The most well-preserved Roman ruins in the Middle East, Jerash is a fascinating site, where history comes alive–all without the crowds you might find at places like the Acropolis or the Colosseum. Built in 64 BC, Jerash was at the eastern edge of the Roman Empire. With temples, amphitheaters, and even a hippodrome, a visit here is a hands-on lesson in Roman daily life.

INSIDER TIPJust because it’s not the Jordan Trail doesn’t mean you shouldn’t come prepared. Bring comfortable shoes, plenty of water, and a brimmed hat or parasol.

At the end of the road in Dana Biosphere Reserve, Feynan Ecolodge is a beautiful experiment in sustainable tourism. The facilities here are low-key, with communal vegetarian meals, simple (but still chic!) rooms lit only by candlelight, and basic bathrooms. But what’s not low-key is the setting–the beautifully rugged mountains of the Dana Biosphere Reserve, dotted with goats. Each night, Feynan gives a presentation on the activities available for the next day. On the premises, you can try a cooking class or go to a tea demonstration with a local elder. Local guides can also take you on hikes into the reserve, where you’ll be welcomed by goat herders and, if you’re lucky, get to share bread and tea with a family. At night, Feynan’s rooftop becomes a theater for galactic sightseeing, with astronomers leading guided stargazing sessions.

No visit to Jordan would be complete without an urban adventure in the capital city of Amman. Built on an ancient Roman settlement, Amman might be one of the most aesthetically-pleasing capital cities in the world. With rolling hills as far as the eye can see, most of the buildings in Amman are made of limestone and only 3-4 stories tall, lending a stylish uniformity to the city when seen from a distance. On the ground, however, everything changes, especially in the busy downtown, where modern shops and restaurants abutt Roman ruins. The best way to explore Amman’s maze of streets is on a hunt for kanafeh, the beloved Arab treat that consists of cheese, semolina flour, and rosewater. Yes, it’s meant to be a dessert, and yes, it’s an acquired taste. The uncontested king of kanafeh in Amman is Habibah Sweets, a tiny shop hidden on a side street near the Roman Nymphaeum where there’s always a line. Look for the groups of people outside standing up and eating fresh kanafeh off of paper plates.

Sleep Under the Stars at a Bedouin Camp

Bedouin hospitality is legendary throughout the world, and deservedly so. Whether you’re hiking the Jordan Trail or exploring Wadi Rum, it’s quite common for a complete stranger to invite you in for tea. Throughout Jordan, there are a few hotels that can give you the Bedouin experience at every price point. Seven Wonders Bedouin Camp in Petra and Captain’s Desert Camp in Wadi Rum offer a Bedouin experience for those on a backpacker’s budget–communal meals, basic (read: not-so-stylish) accommodations, and shared bathrooms. On the other end of the spectrum, Bespoke Hideaways specializes in private custom experiences, with luxury amenities (and even wine!) in a remote location in Wadi Rum. But no matter how much you’re spending on creature comforts, you’ll be treated to that same famous hospitality, with music, dancing, and countless cups of tea. 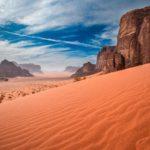 Climb to the Monastery at Petra

There’s no doubt that Petra is one of the Seven Wonders of the World–it is an astonishing and mesmerizing feat of architecture and ancient engineering. And while the famous Treasury gets all the attention on Instagram, there’s another site at Petra that might be even more spectacular: The Monastery. Accessed by a steep limestone trail that consists of carved steps and paths that hug the edges of cliffs, getting to the monastery is half the fun. Once you’ve arrived at the top, you’re greeted by a massive carved facade–and about 1/50th of the number of people who are hovered around the Treasury. Marvel at the workmanship and take it all in from the shaded cafe selling cold drinks and tea. 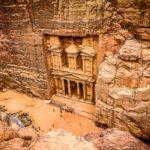 RELATED STORY
Petra 101: Everything You Need to Know About Visiting the Ancient Rose City
10 OF 10

Float in the Dead Sea

There’s no easy way to describe what it feels like to swim in the Dead Sea. This inland sea (really, a lake) is 10 times saltier than the ocean, making swimmers more buoyant than ever, while mineral-rich waters leave you feeling oddly greasy. Splash around, read a book, or slather on some Dead Sea mud and let it dry in the sun for the ultimate DIY spa treatment. There’s nowhere like this on earth.