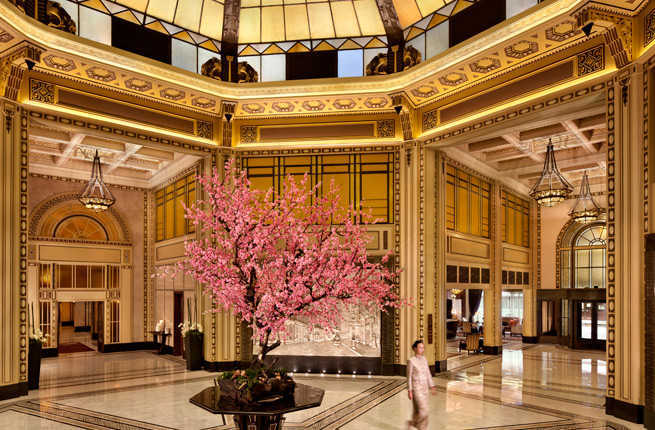 With bold geometric shapes, lush colors, and a heavy hand of opulence, Art Deco is one of the world’s most beloved architectural styles. What started in France in the 1920s has had an everlasting influence on everything from fashion and jewelry to buildings and structures. And hotels are no stranger to the lavish and swank atmosphere it offers. Here are the ten chicest Art Deco hotels, whether you were re-inspired by The Great Gatsby or are a die-hard Deco fan.

Right on the Bund, Shanghai’s 270-room Peace"> majestically rises on the city’s riverfront district. It’s been a landmark since it opened in 1929. The design calls to mind old-fashioned glamour with a modern sensibility, but nothing takes away from the Art Deco touches like the gilded geometric shapes and ceiling ornamentation. A notable feature is a yellow glass rotunda where sunlight casts a gorgeous golden hue. 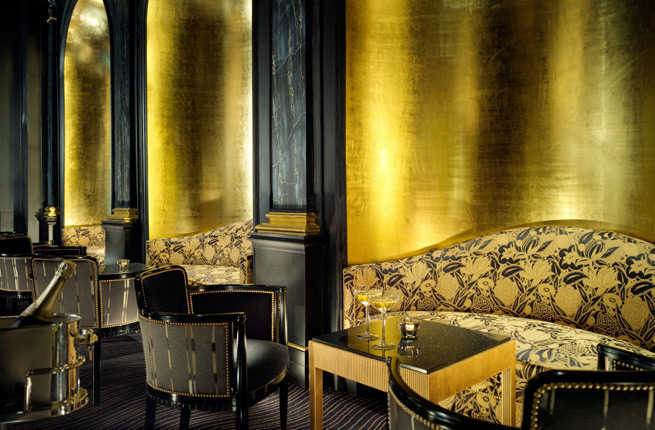 Opened in 1889 and reopened in 2010 after a $340-million renovation, the glamorous 268-room The"> on the banks of the Thames river in London is Art Deco at its finest. No two rooms are the same, and all feature Deco-style furnishings with rich color palettes. The Beaufort Bar is decadent and ornate with black and gold interiors and rare vintage champagnes on the menu. 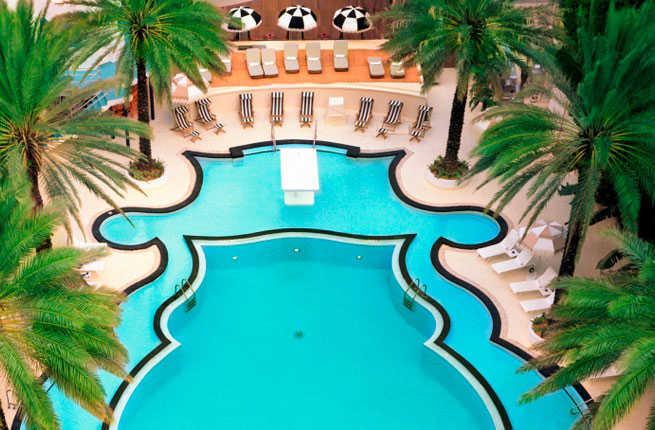 Of course, Miami reigns as America’s Art Deco haven, and The"> is arguably the most famous example. Lavish interiors bring to the mind the roaring 20s thanks to architect L. Murray Dixon, who gave the hotel much Art Deco love when it was built in the 1940s. The iconic pool, which has been featured in several movies, is ultra stylish and oh-so-retro. 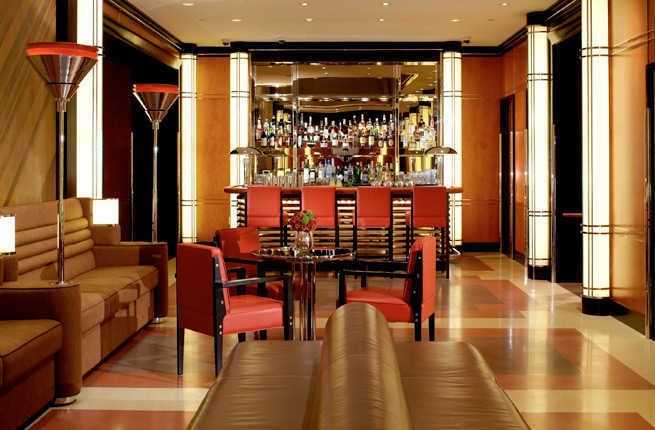 The sophisticated, 76-room landmark The"> in New York City restored the original features of the Stanford White-designed building, thanks to designer Thierry Despont. The terrific restaurant is named after America’s first professional theater club, The Lambs, and Art Deco details like chrome metal, suede walls, and wood paneling are well preserved. Step back in time at the bar that serves classic cocktails of the roaring 20s. 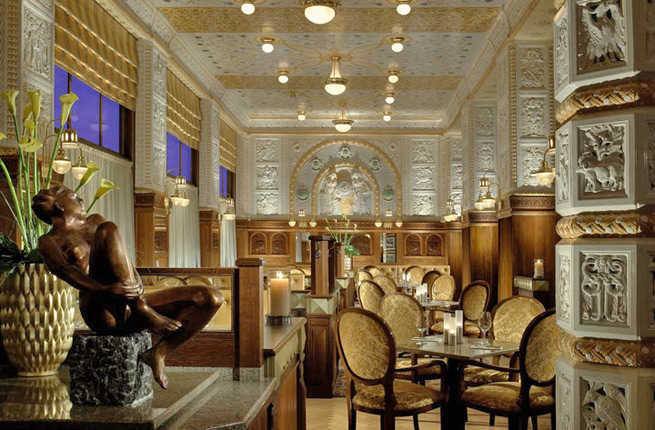 Built in 1913 and massively restored in 2007, the Art"> is one of the most elegant hotels in Prague with all 86 rooms in Art Deco furnishings. Engaging design details like antique bathtubs, grand beds, and Cubist furnishings are a blast from the past. The signature Cafe Imperial—visited by Franz Kafka—is a masterpiece with original Art Nouveau ceramic tiled walls, mosaic ceilings, decorative pillars, and a grand marble staircase. 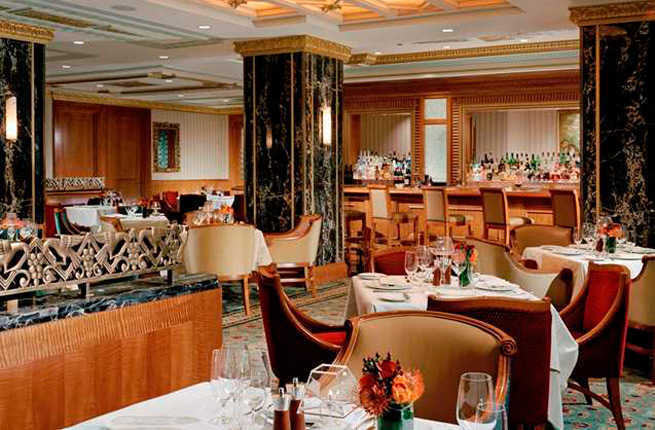 The legendary, iconic Waldorf"> in NYC is considered one of the world’s great examples of Art Deco, and it comes with a storied past. The landmark hotel features a restored lobby with intricate murals, antique furnishings, and a heavy hand of glamour. Guests can find murals by French artist Louis Rigal and a tile mosaic adorns the floor. The hotel also features Art Deco-style lights hanging from the gold-and-silver leaf ceiling. 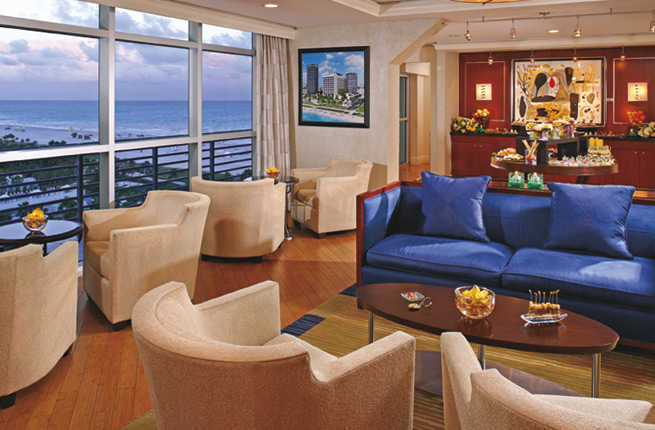 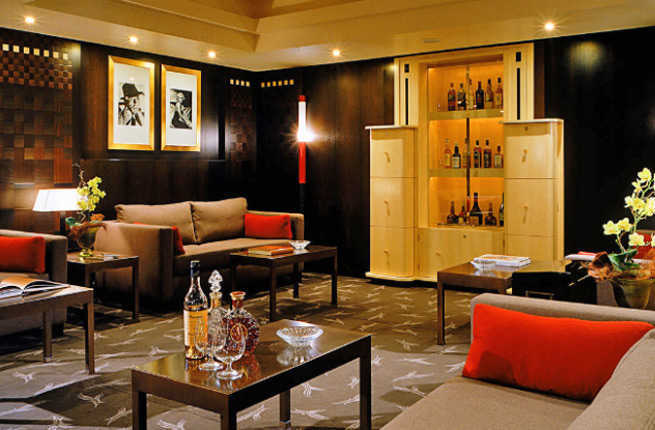 The Grand"> in Cannes is no stranger to A-listers. The 409-room, grand hotel right on the Croisette is a stand-out as the flagship hotel of the Riviera. Opened in 1929, the interiors are elegant, classic, and timeless. Seven floors look over the seafront, but it’s just as famous for its interiors (and the celeb guests within) as its exterior views. 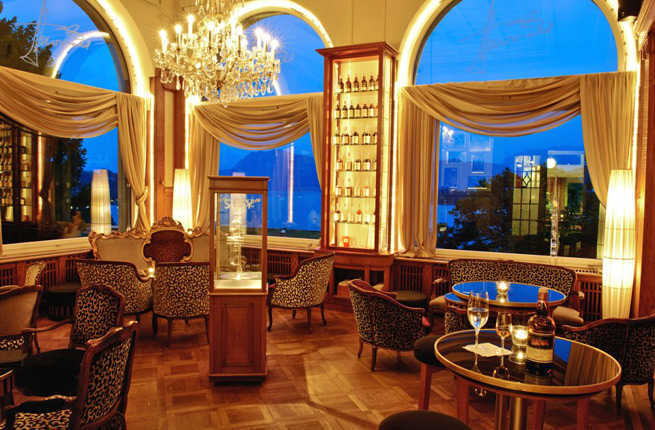 Fans of Cubism will love Art"> Originally opened in 1910 as a palace hotel in Luzern, Switzerland, this stomping ground for high society adopted to the Art Deco trend as soon as it flourished. Everything here, from the wallpaper and textiles to wood veneer and architecture, is inspired by cubism. And all renovations that have happened here, from the rooms to the facade, swing to the beat of Art Deco.